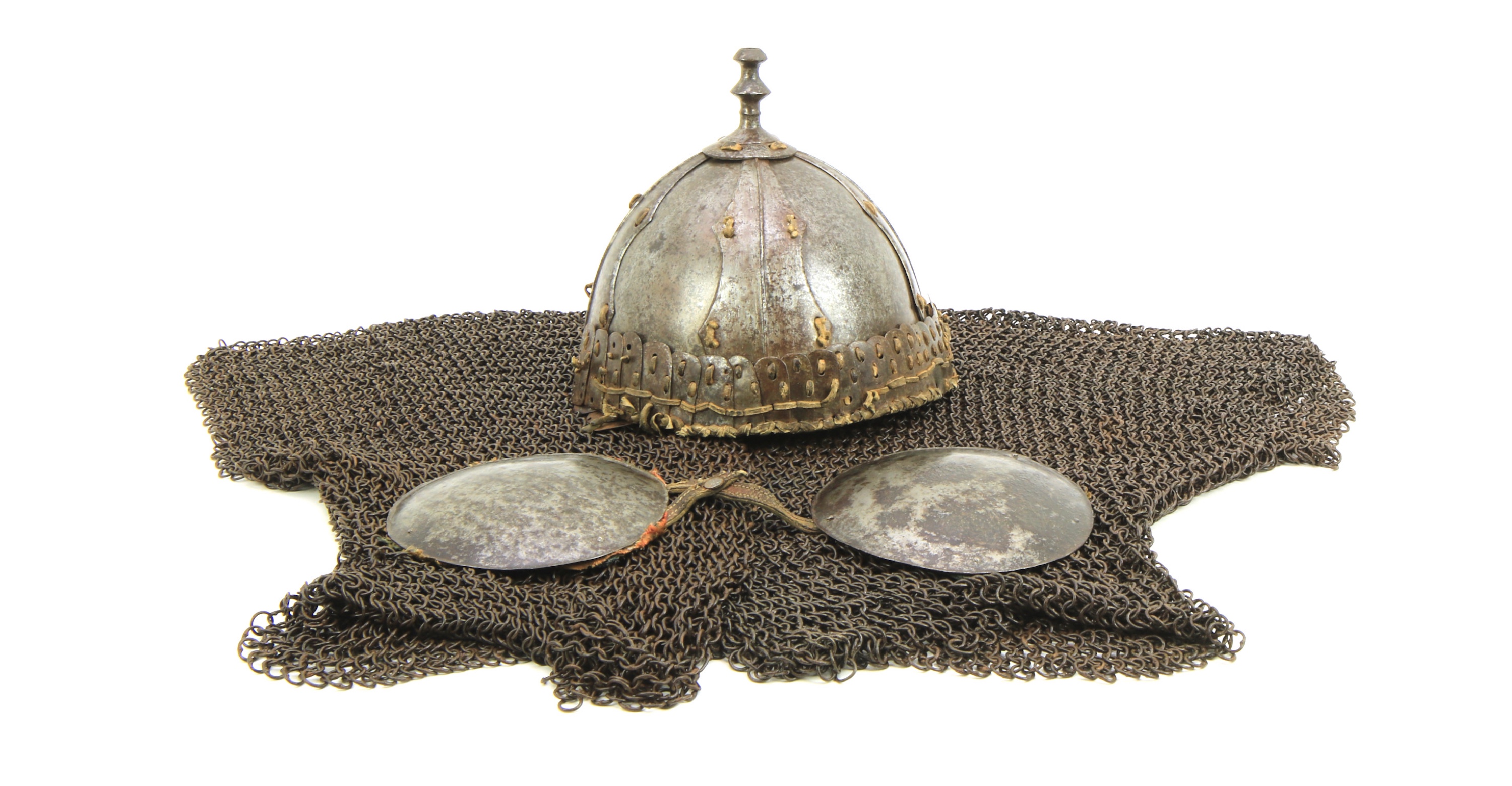 This item has been sold.
Read full article
Helmet

Collected in Tibet by Melvyn Goldstein in the 1980s.

Cleaned at the Metropolitan Museum.

This set consists of an eight plate helmet, a mail shirt, and two mirrors. They were collected by notable American anthropologist Melvyn Goldstein during one of his trips to Tibet in the 1980s. Goldstein is among others author of The New Tibetan-English Dictionary of Modern Tibetan.

A classic eight plate Tibetan helmet, with four cusped and ribbed outer plates laced to four triangular inner plates. All plates are tied to a finial at the top with a plume holder.

It retains a row of lamellar plates at the front, and parts of the side-flaps.

The base of the finial is incised with an inscription. 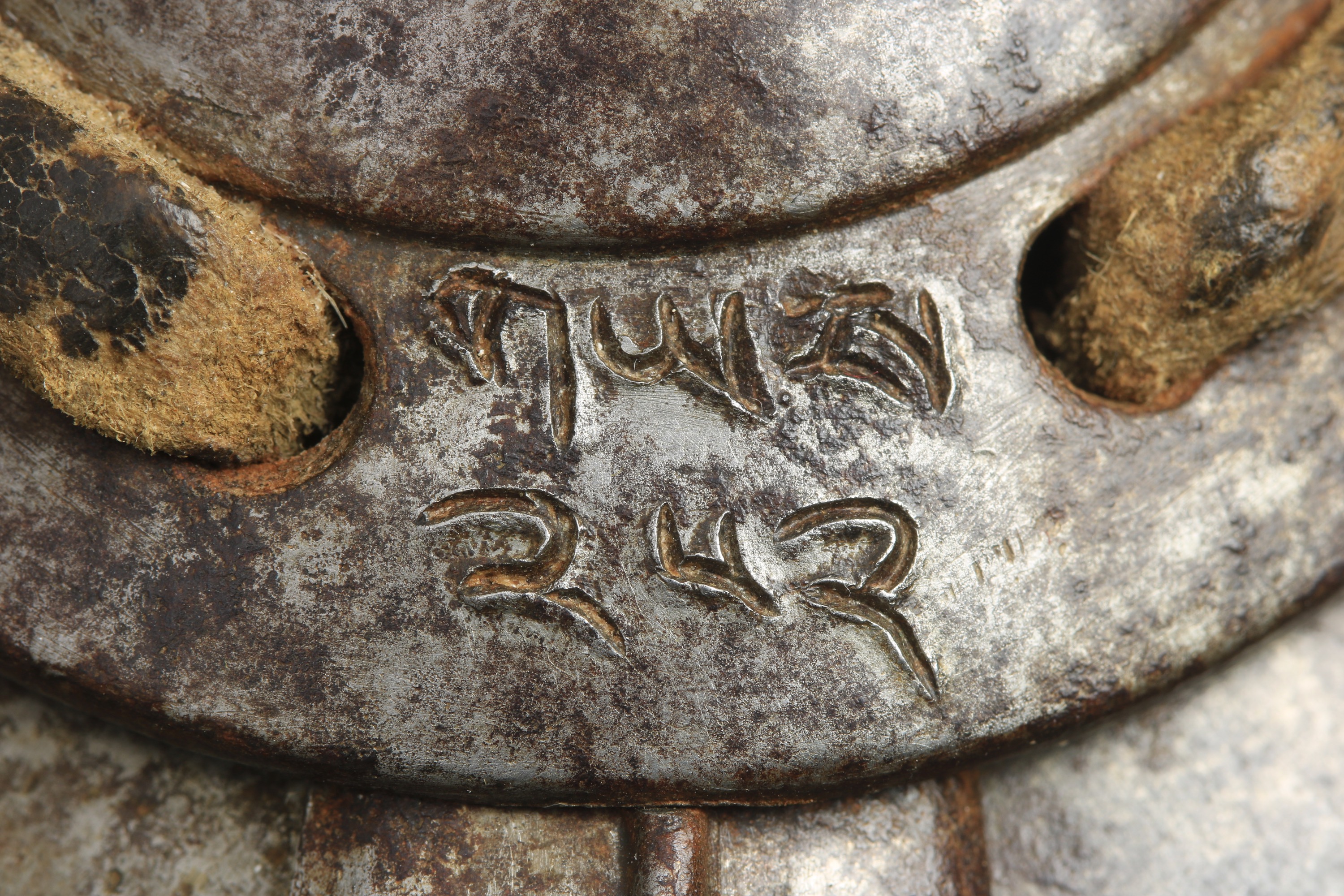 G.yas means "right", as in the right-hand side.1

It may refer to the Spyan g.yas dgon pa, literally translated the "Right Eye Monastery", a Tibetan monastery founded in the 11th century. It is situated just southeast of Lhasa at latitude 28.97897 longitude 91.51028. It is known as Jiàn Yè Sì (建叶寺) in Chinese.

Tibetan monasteries often stored large amounts of arms and armor, both for votive purposes, wearing at festivals, and for actual use.

Helmets of this style with eight plates of which the outer four plates are cusped have a long history in Tibet. The earliest may be in the Metropolitan Museum, accession number 2002.226. It is believed to date from the 8th-10th century. Also see accession number 2008.354 attributed to the 16th-17th century and another of the same period that is part of a suit of lamellar armor, accession number 36.25.53a, b.

A number of Tibetan helmets with armory markings re found in Donald Larocca's landmark publication, Warriors of the Himalayas. It includes a helmet in the British Museum that is part of a set of lamellar armor. Both helmet and the back of the suit are marked "spus 82" or "item 82".1

Another helmet in the Pitt-Rivers museum in Oxford is marked shong ba or shod ba with the number 58.2 Yet another is in the Victoria & Albert Museum, London, accession number 528A-1905. It is marked phag ri with the number 12 which according to Larocca refers to the phag ri rdzong, also known as Phari Jong fortress which was overtaken by the Younghusband expedition in 1903. They found it largely abandoned and with large amounts of arms and armor piled up in the courtyard.3

Lastly, I sold a Tibetan helmet with lamellar section in 2017 that was marked sbus 672. Sbus is possibly short for sbus ru, which is defined as “one of the four traditional units (ru) of Central Tibet.” 4

Notes to helmet
1. Thanks to Juul Eijk for the translation.
2. Donald J. Larocca. Warriors of the Himalayas; Rediscovering the Arms and Armor of Tibet. The Metropolitan Museum of Art, New York. Yale University Press, New Haven and London. Pages 58-59.
3. Ibid. Pages 60-61.
4. Ibid. Pages 66-67.
5. Melvyn C. Goldstein; The New Tibetan-English Dictionary of Modern Tibetan. Berkeley, 1984. Thanks to Donald Larocca for helping with the translation.

Mail armor consisting of thousands of rings makes a very flexible armor that protects well from cuts. According to Sarat Chandra Das, writing in 1902, it was called lung gi khrab in Tibetan, literally "armor of rings". High-quality mail armor was worn by Tibetans as early as the Yarlung dynasty of the 7th-9th century.1

This heavy mail shirt is made of thick rings, each and every one of them is riveted. The shirt is probably quite old and well-used, as all the rings have been thoroughly smoothened from the rubbing against one another during the wearing. It has now gained a deep dark brown patina. Some openings here and there where rings have been lost. 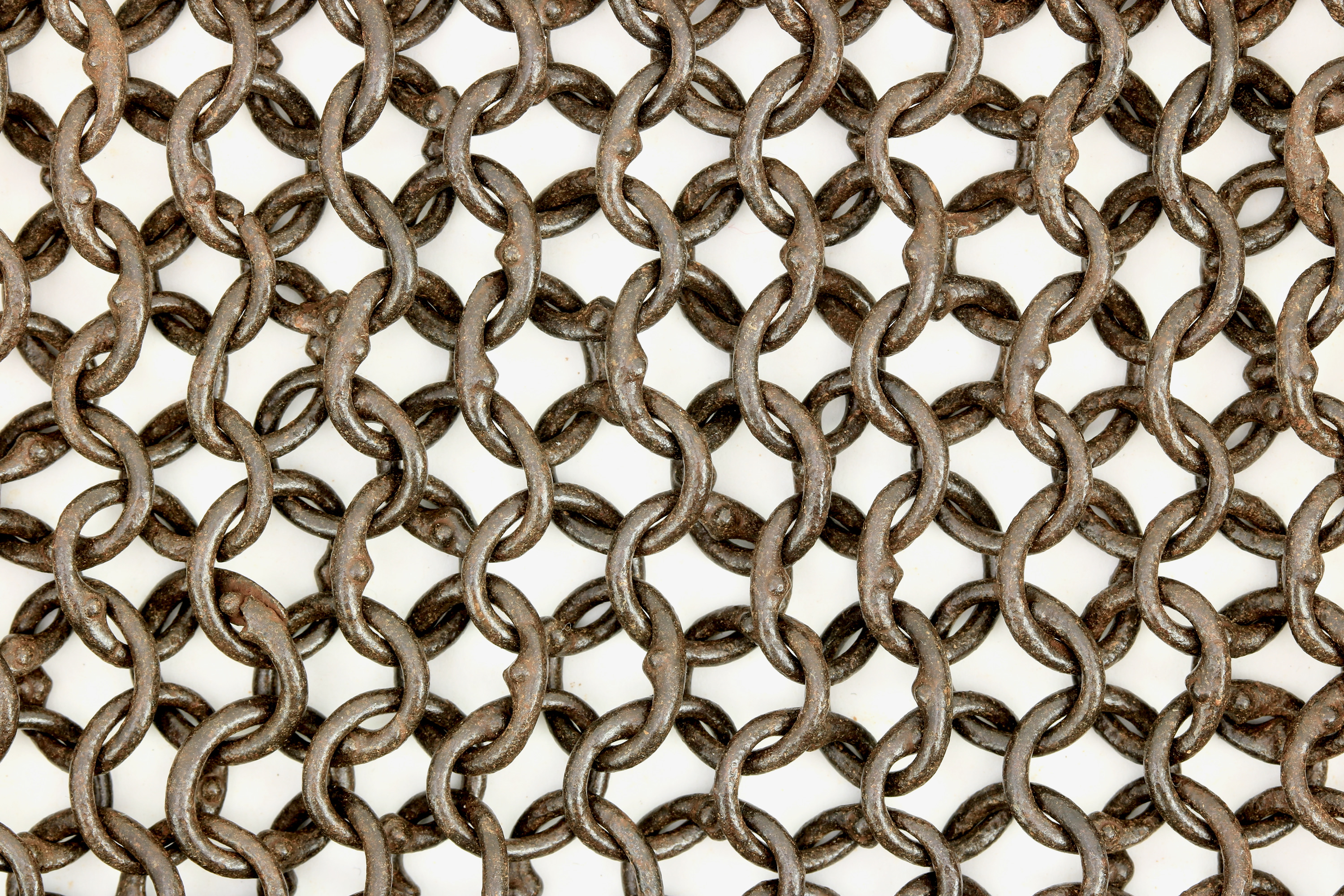 The set is complemented with two "mirrors", domed iron plates that provided extra protection for vital places on the body. Originally, there would have been 4 in a complete set, one on the heart, two on the sides and a last one on the back. They are typically connected with leather straps, of which some remain on our set.

The inside of our plates are lined with fabric. Close inspection shows an indigo-dyed cotton, and fragments of expensive old Chinese silks woven in the prized kesi manner where decorative elements were not embroidered but integrated in the weave. Inside the mirrors are also three wax seals. These are often marks of votive armories.

Similar wax seals are found with some frequency on pieces of Tibetan armor and accessories, including pieces of horse armor, quivers, belts, but I do not recall ever seeing them on (edged) weapons. They were presumably added when the pieces entered a votive armory in a monastery. They also appear on two complete sets of mirrors in the Metropolitan Museum, accession numbers 36.25.351 and 36.25.26.

The set was professionally cleaned by Sean Belair, conservator of the Metropolitan Museum arms and armor department.

Tibetan arms and armour are notoriously hard to date. On one hand, styles changed very little over long spans of time. On the other, the dry, cold, oxygen deprived athmosphere on the Tibetan plateau preserved many artifacts that would have long perished elsewhere. Because of this, Tibetan artifacts can be surprisingly old.

A set of lamellar armor with very similar helmet to ours in the Royal Museum of Edinburough had its leather lacing carbon dated with 95% probability to the period of 1630-1690. A lamellar armor in the Metropolitan Museum was dated with 95% probability to the period of 1480-1660.1 With this in mind, the helmet is probably from roughly the 17th century. The mail and mirrors are extremely hard to date, but a fair estimate would be 16th - 18th century. 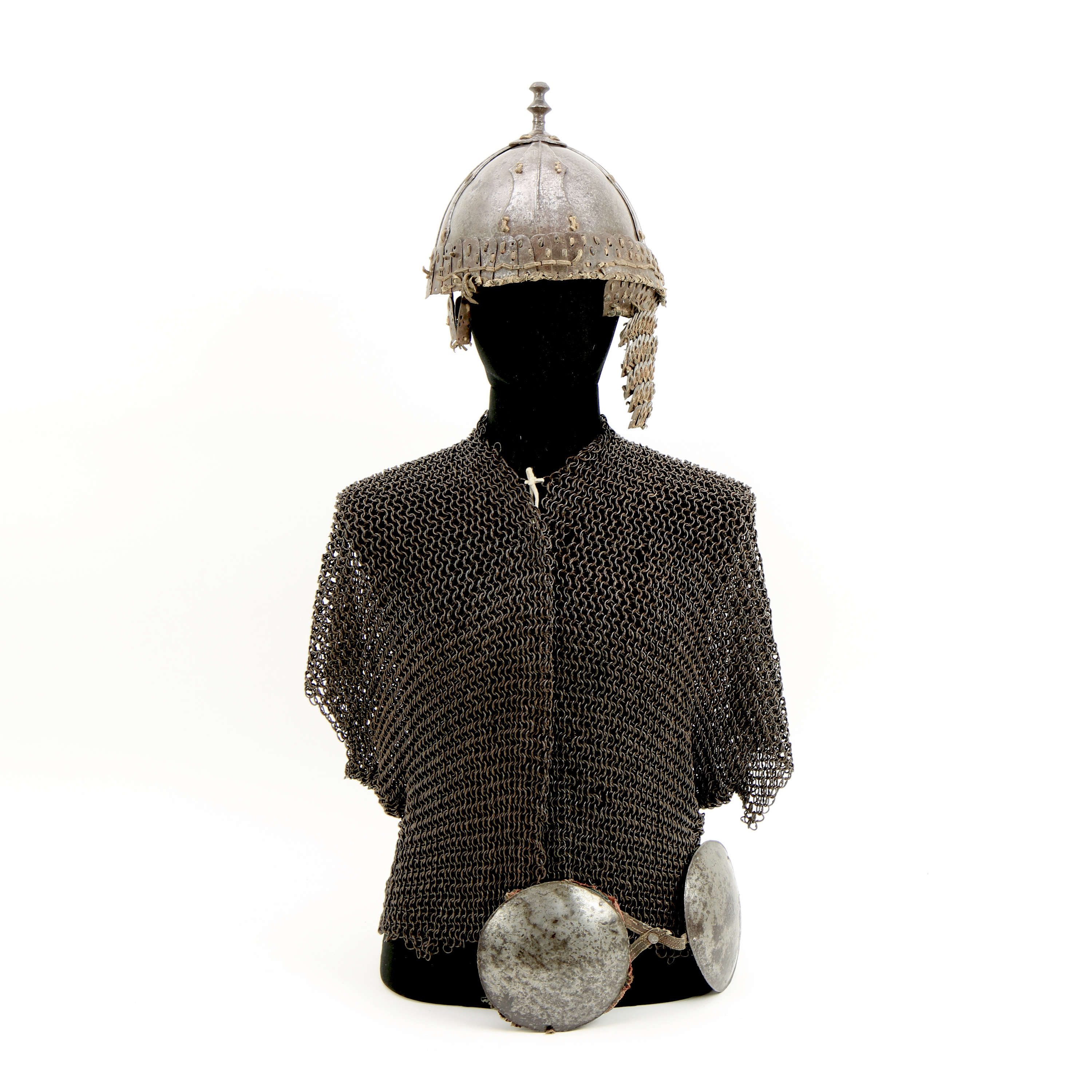 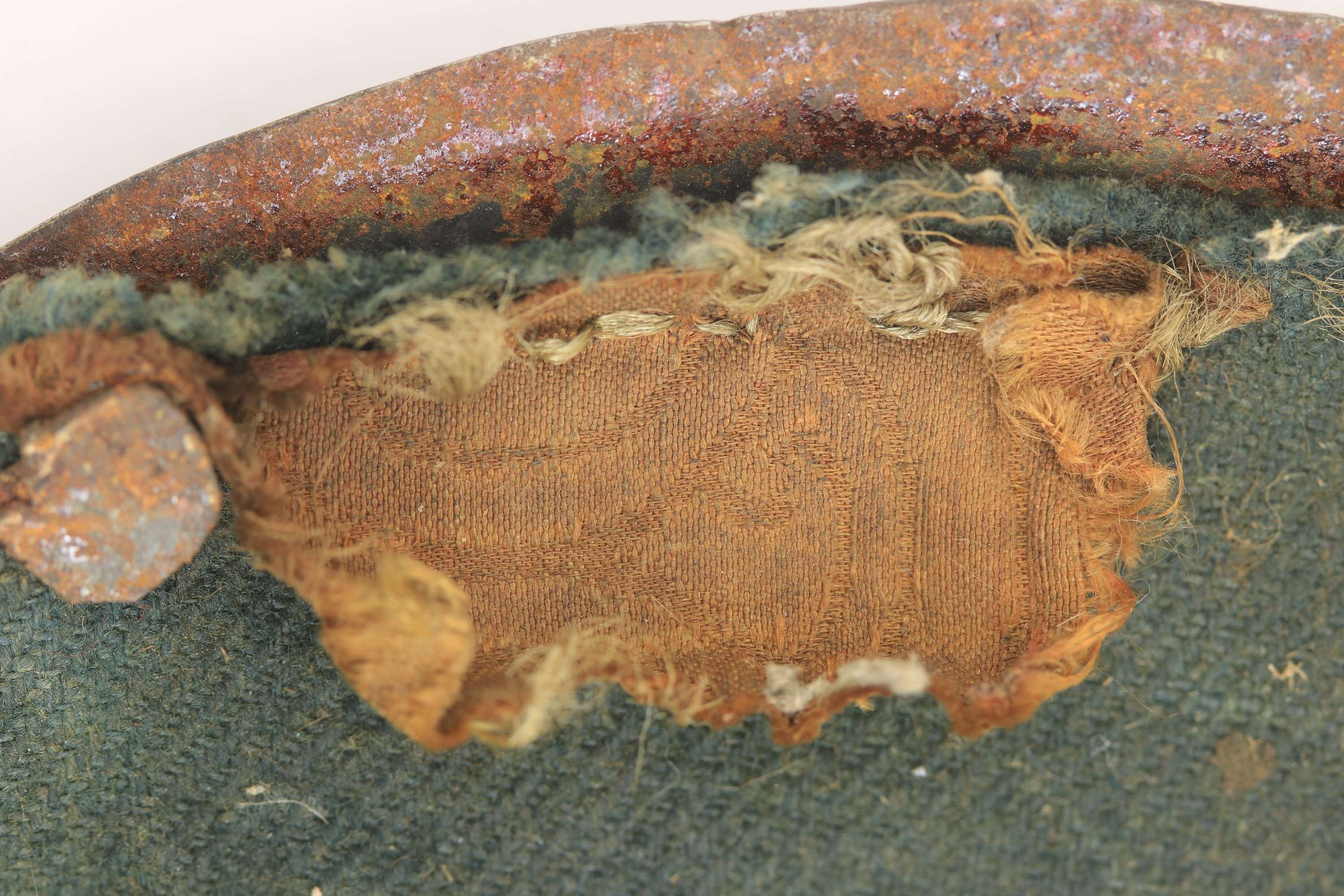 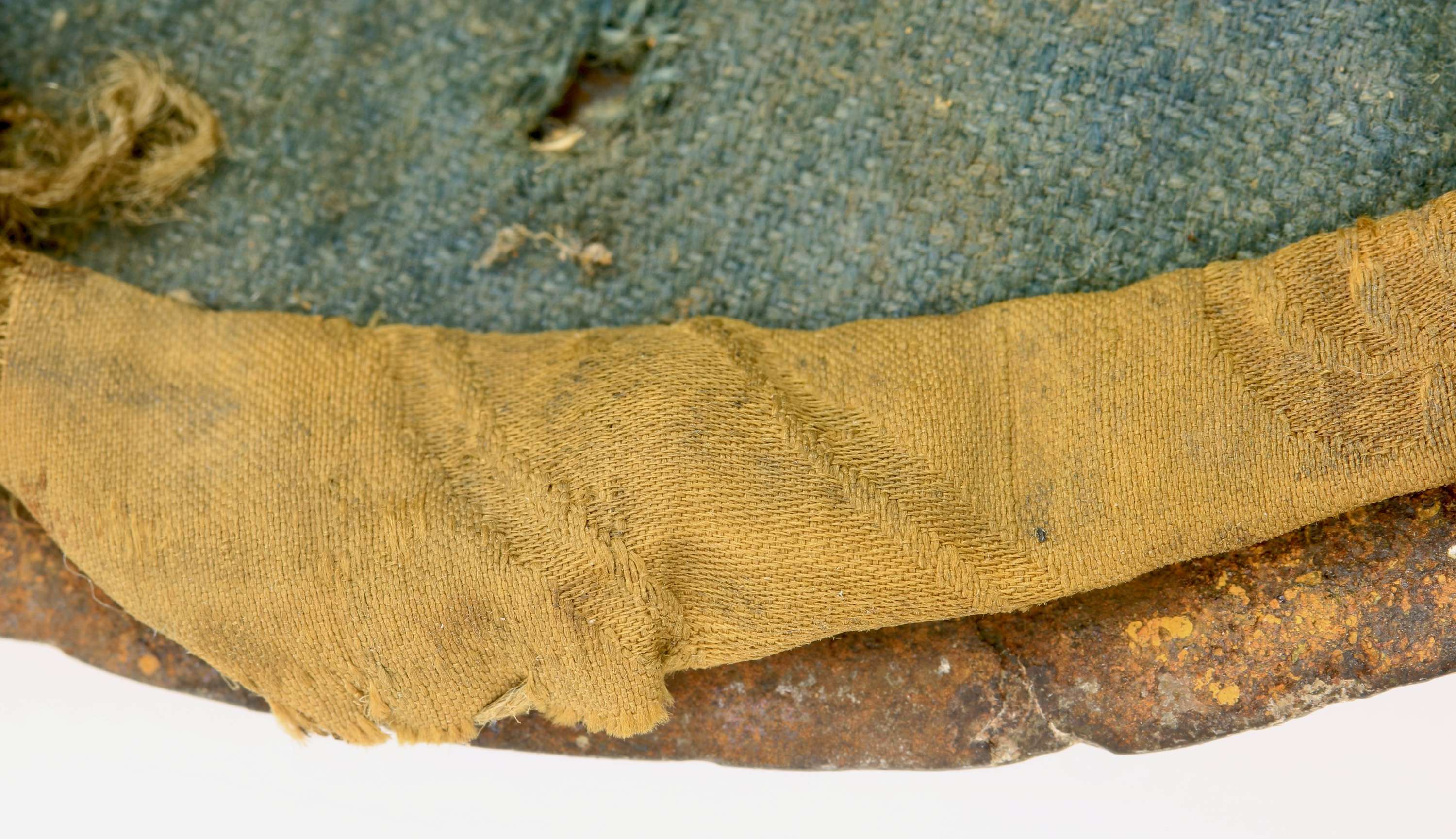 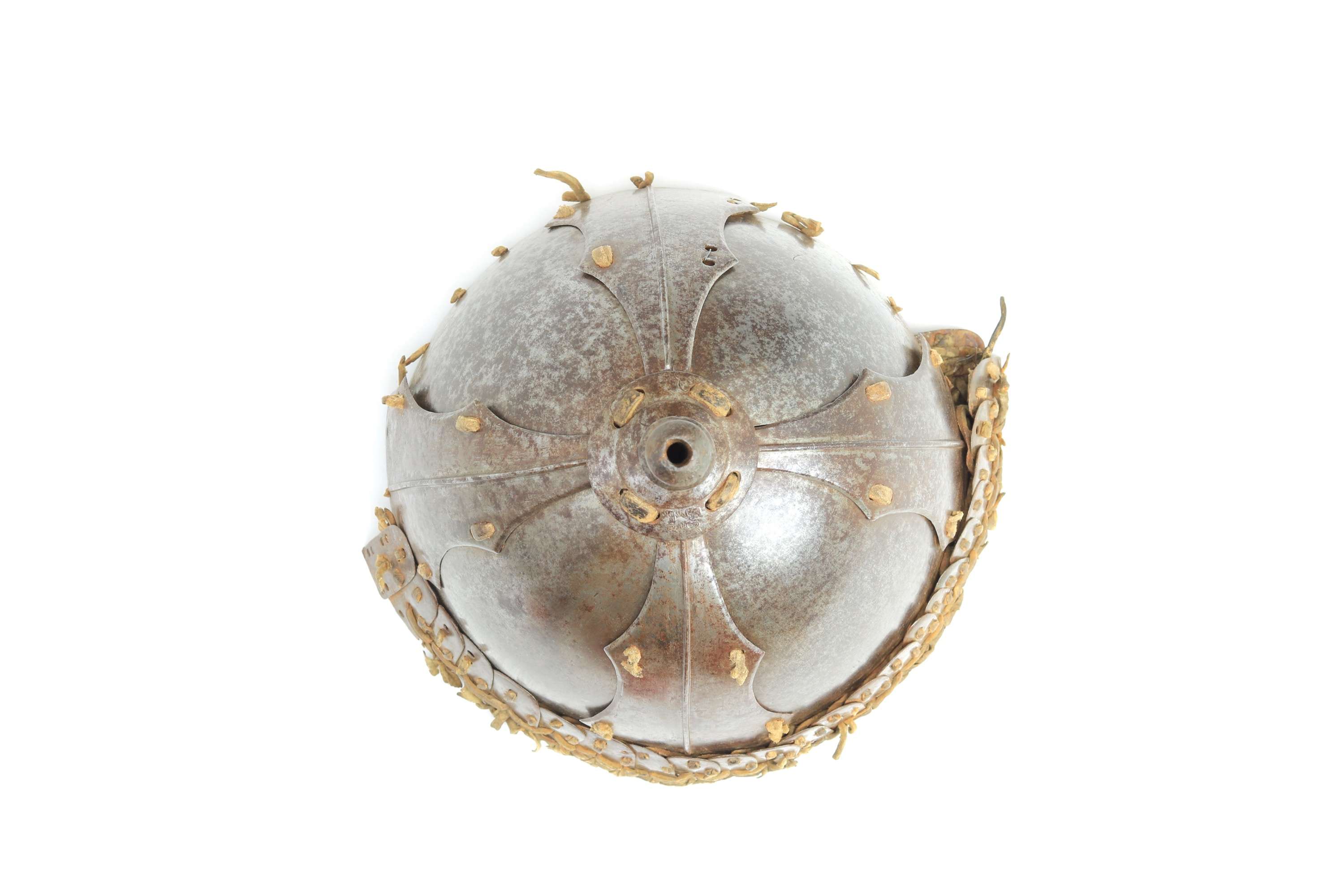 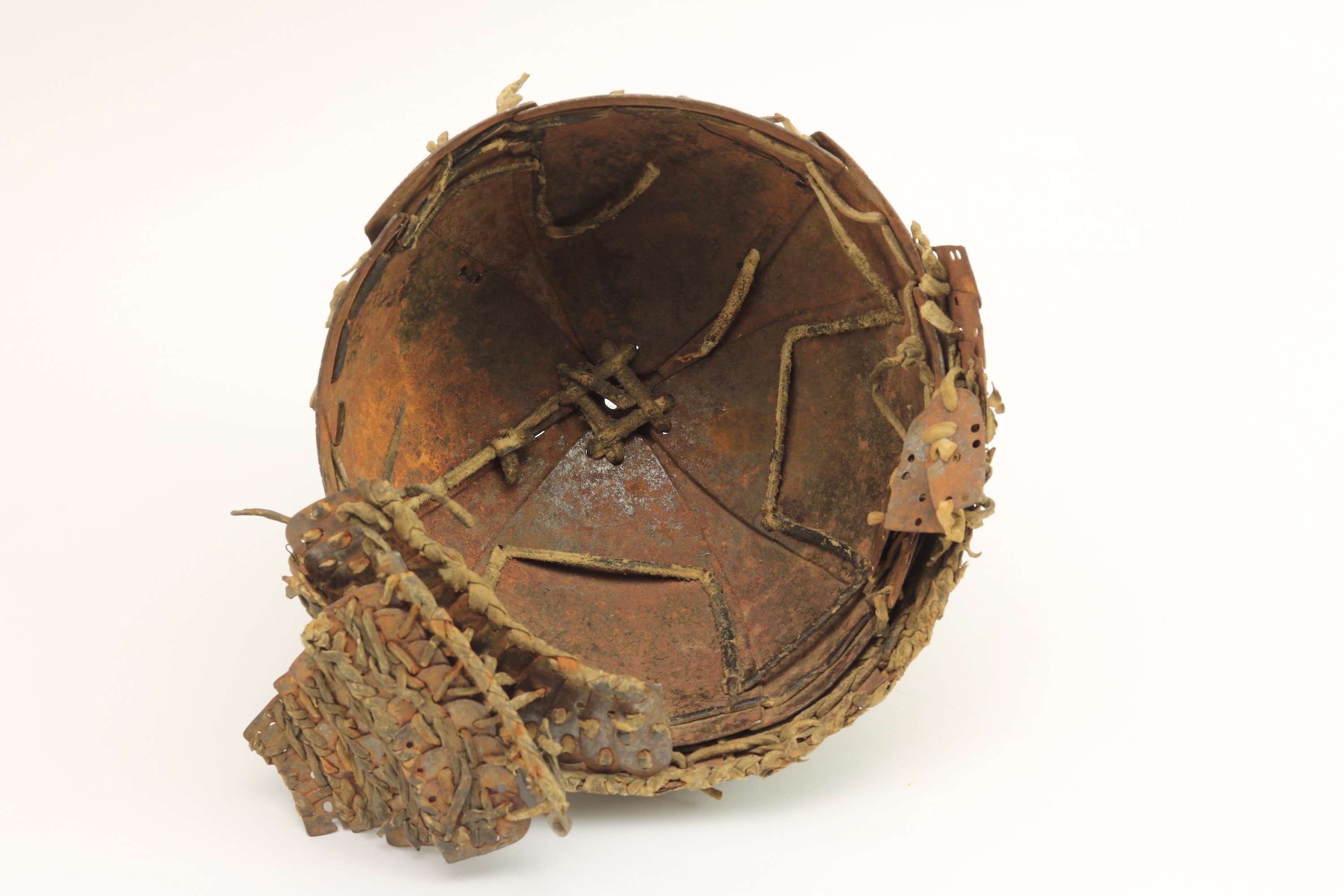 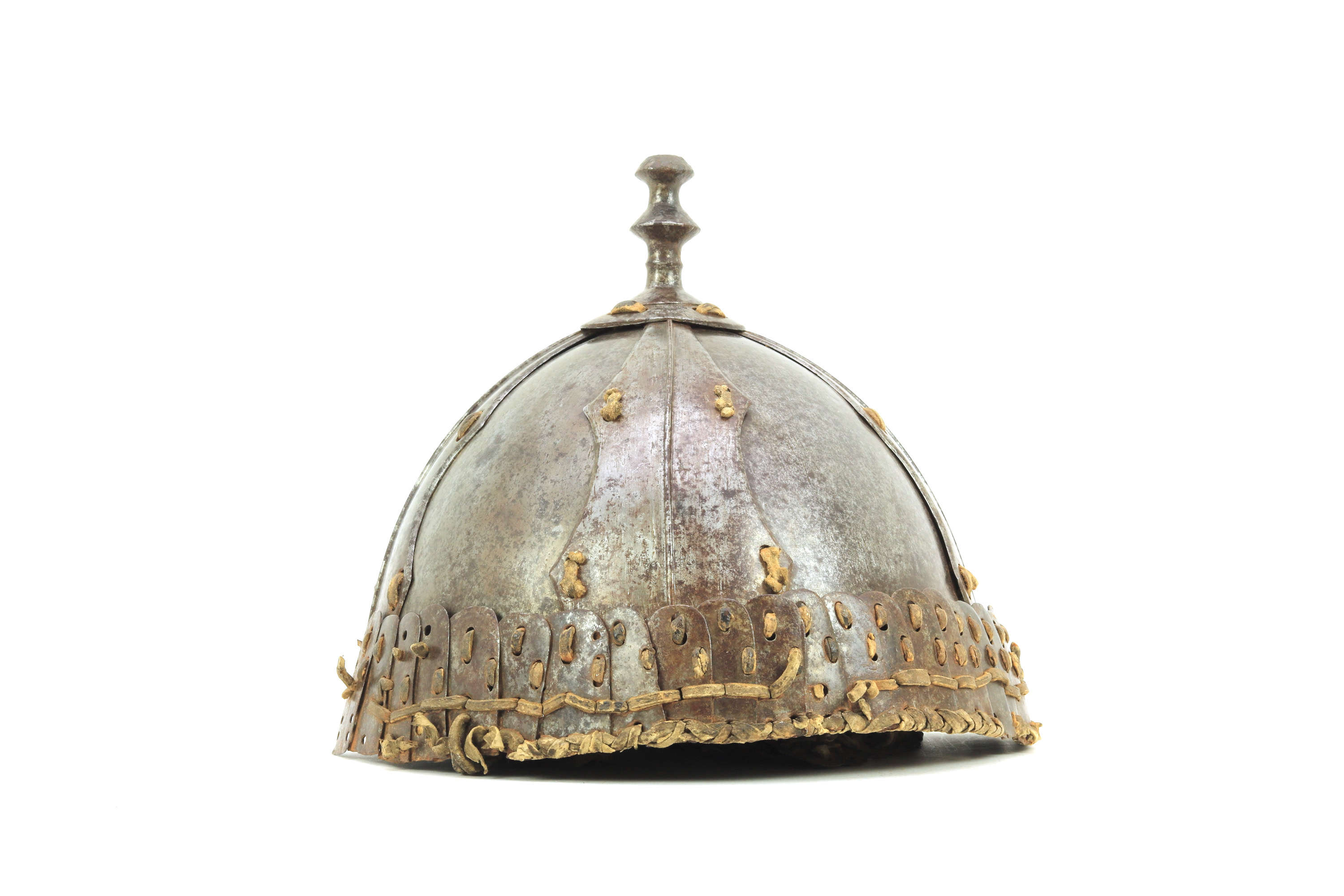 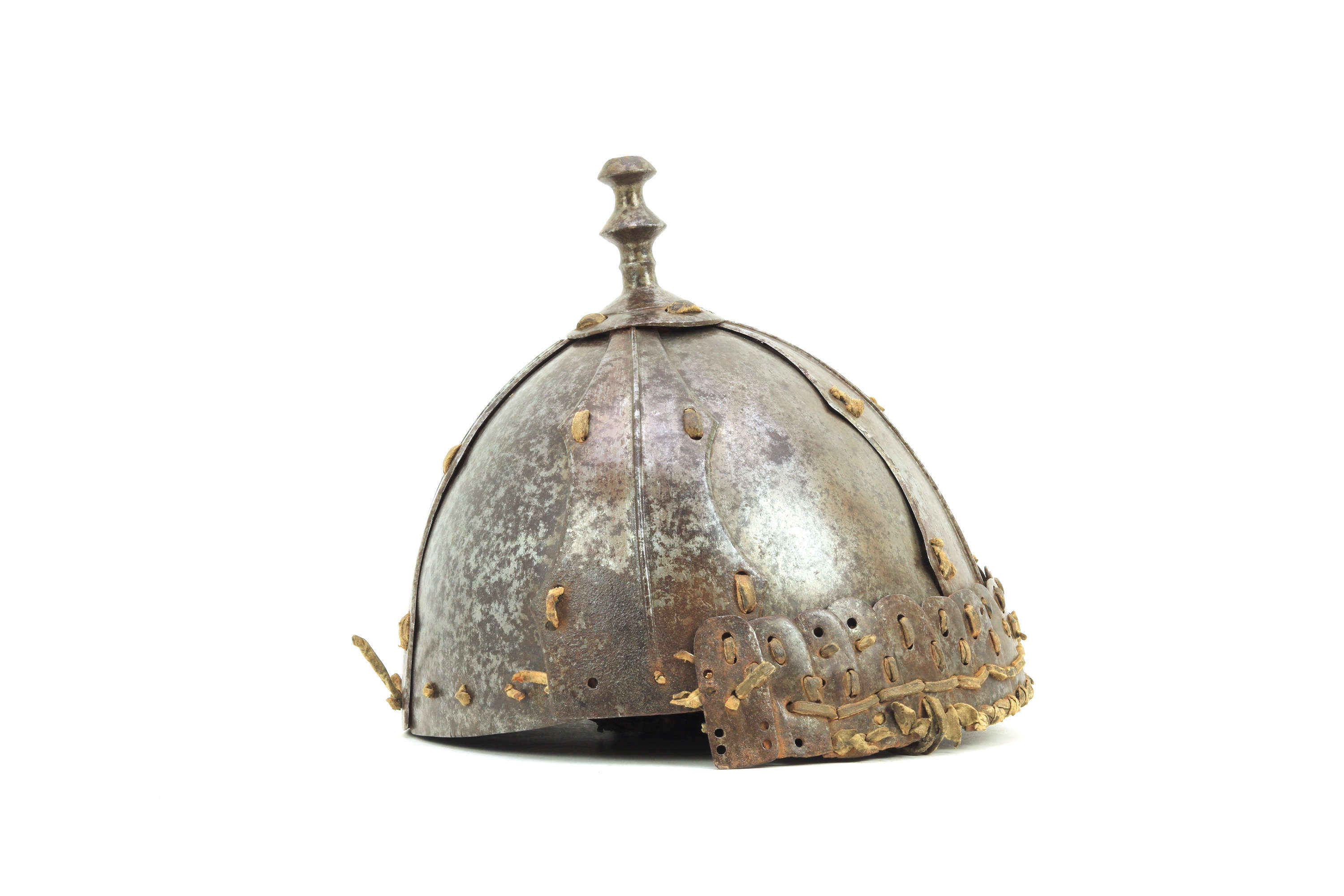 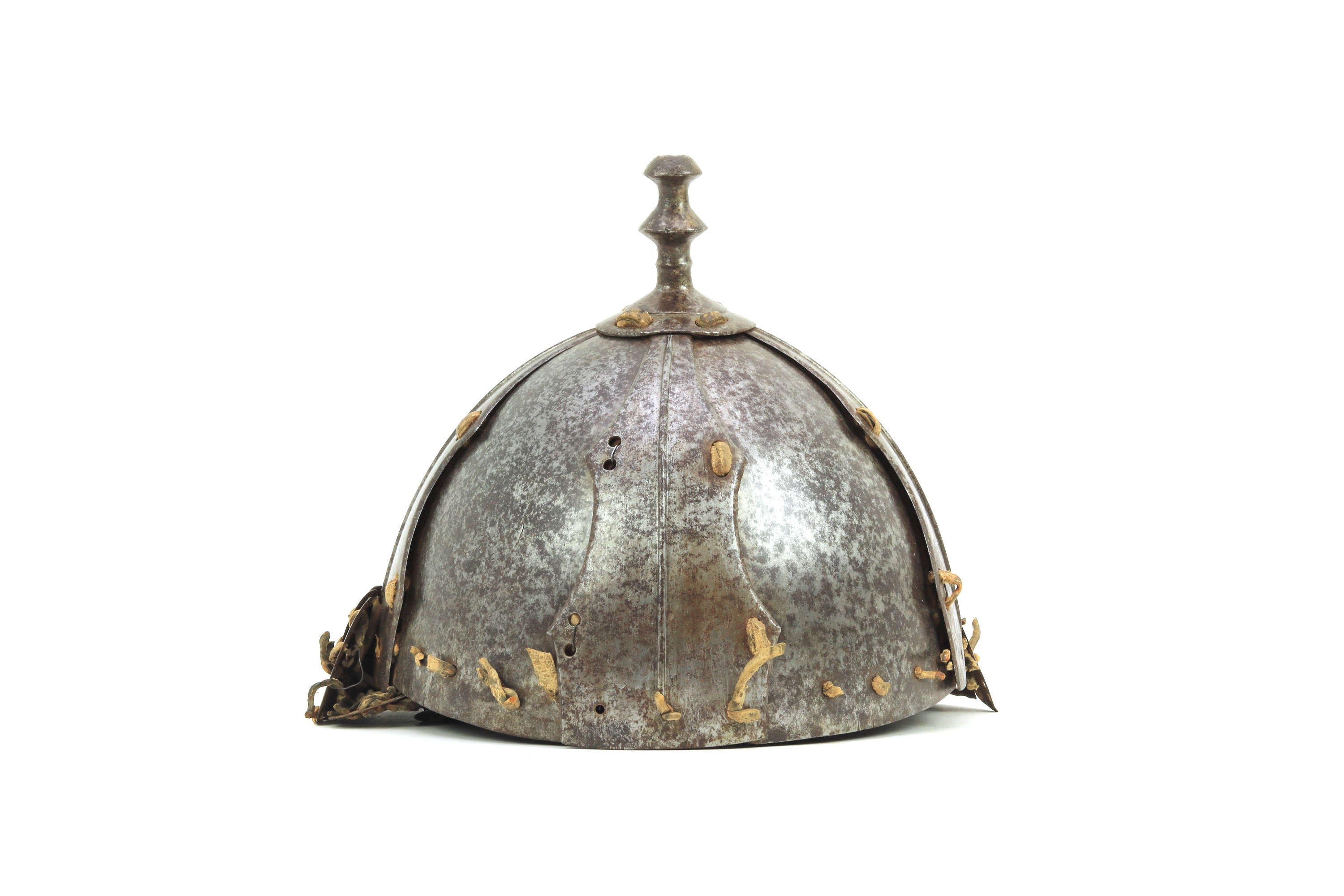 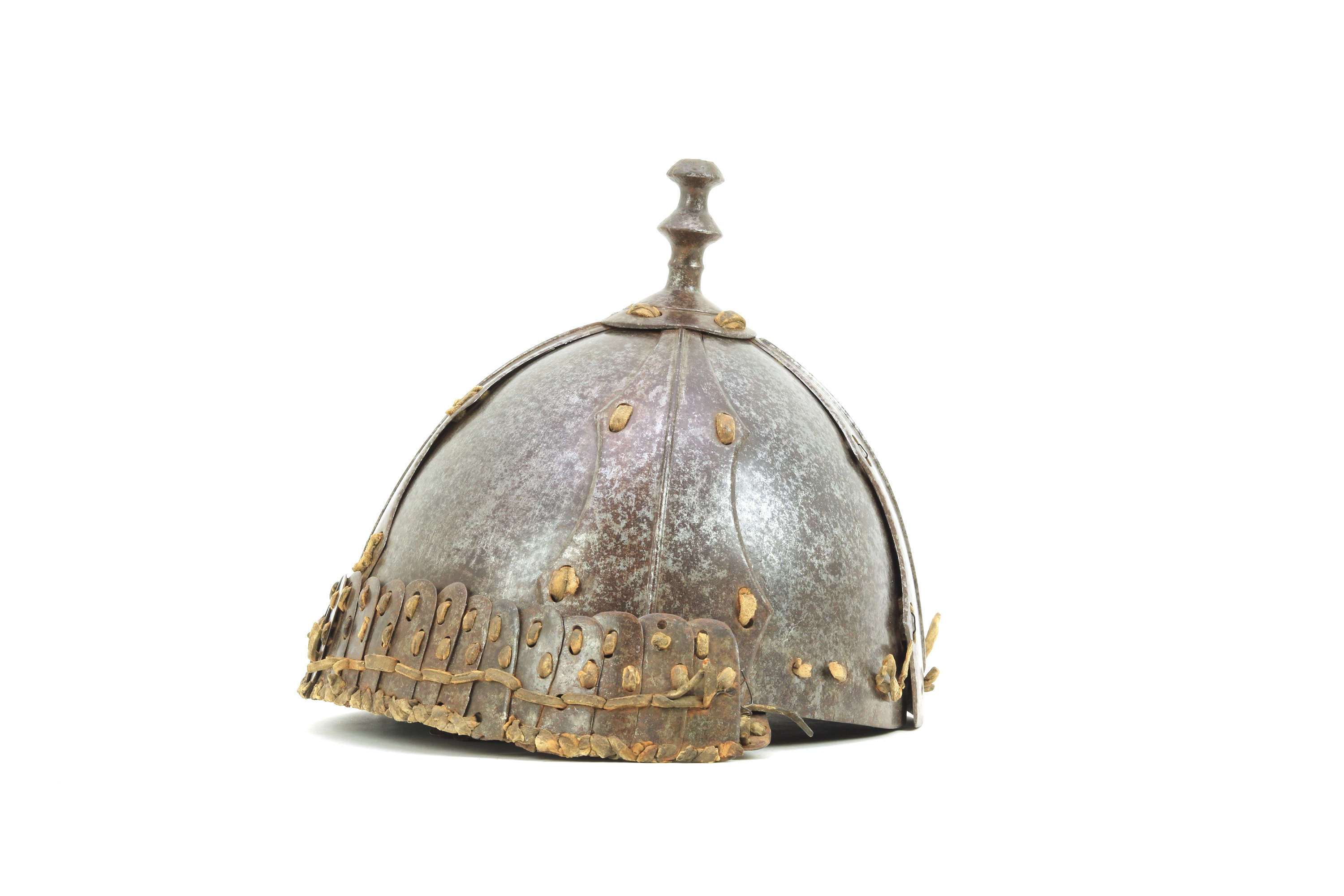 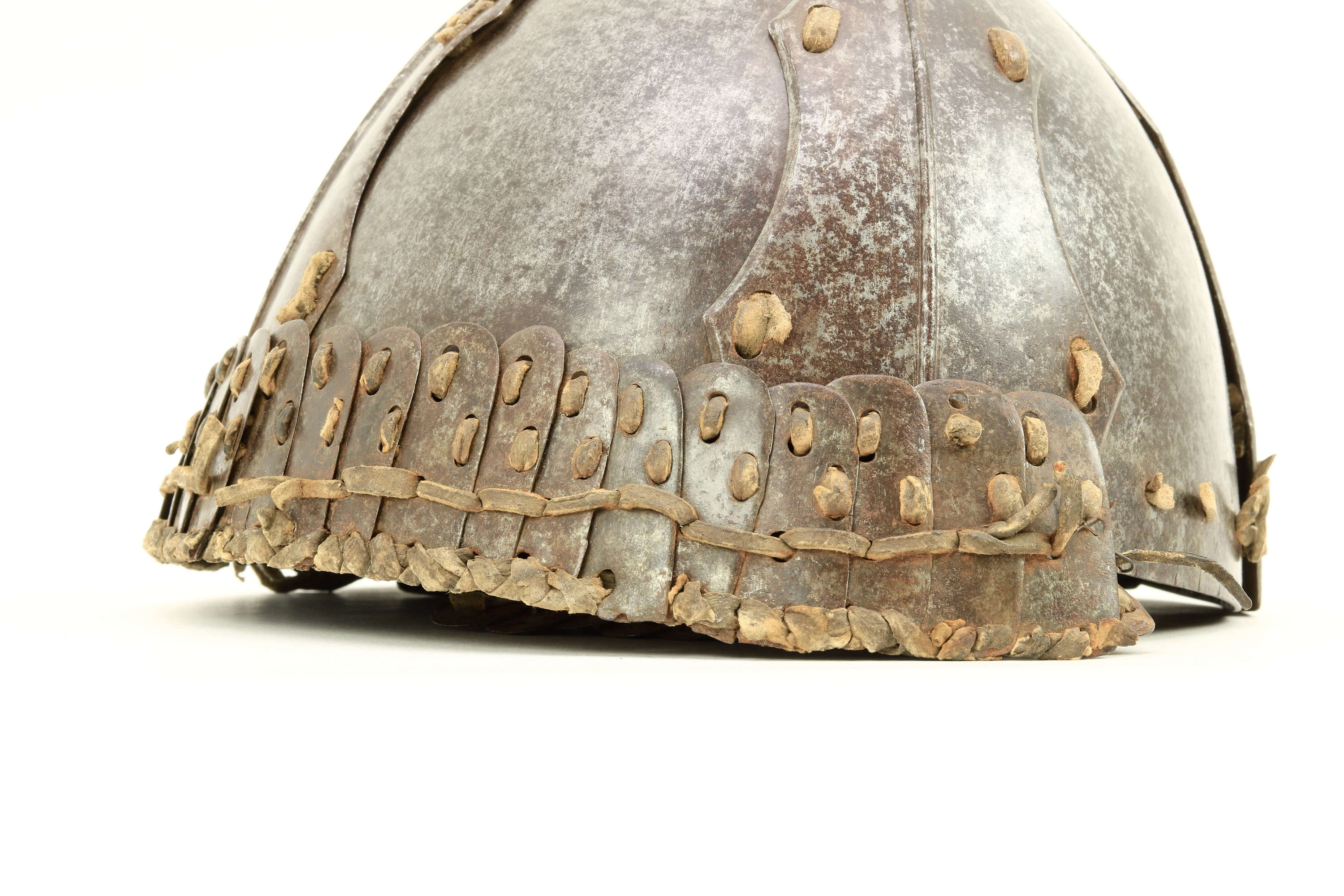 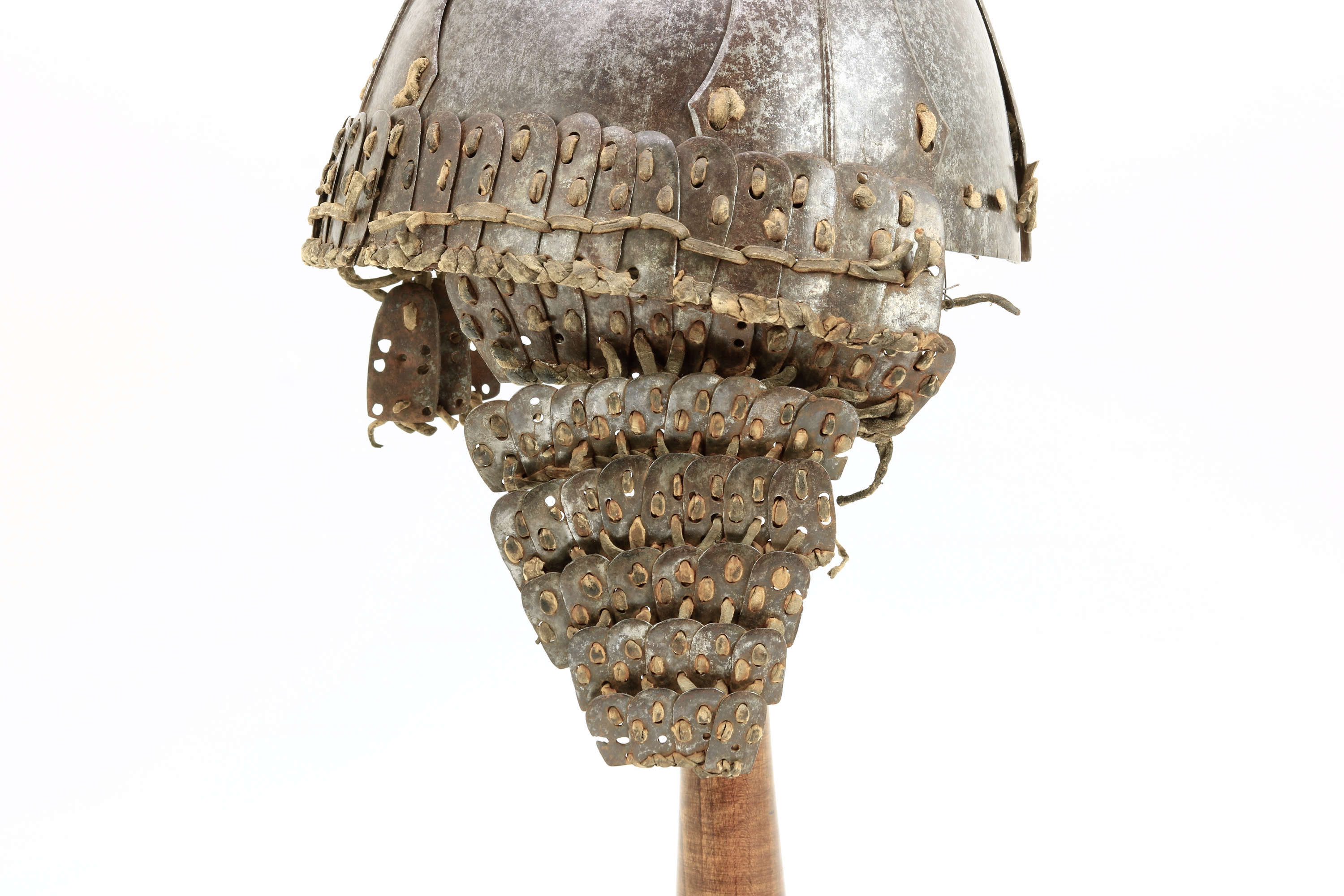 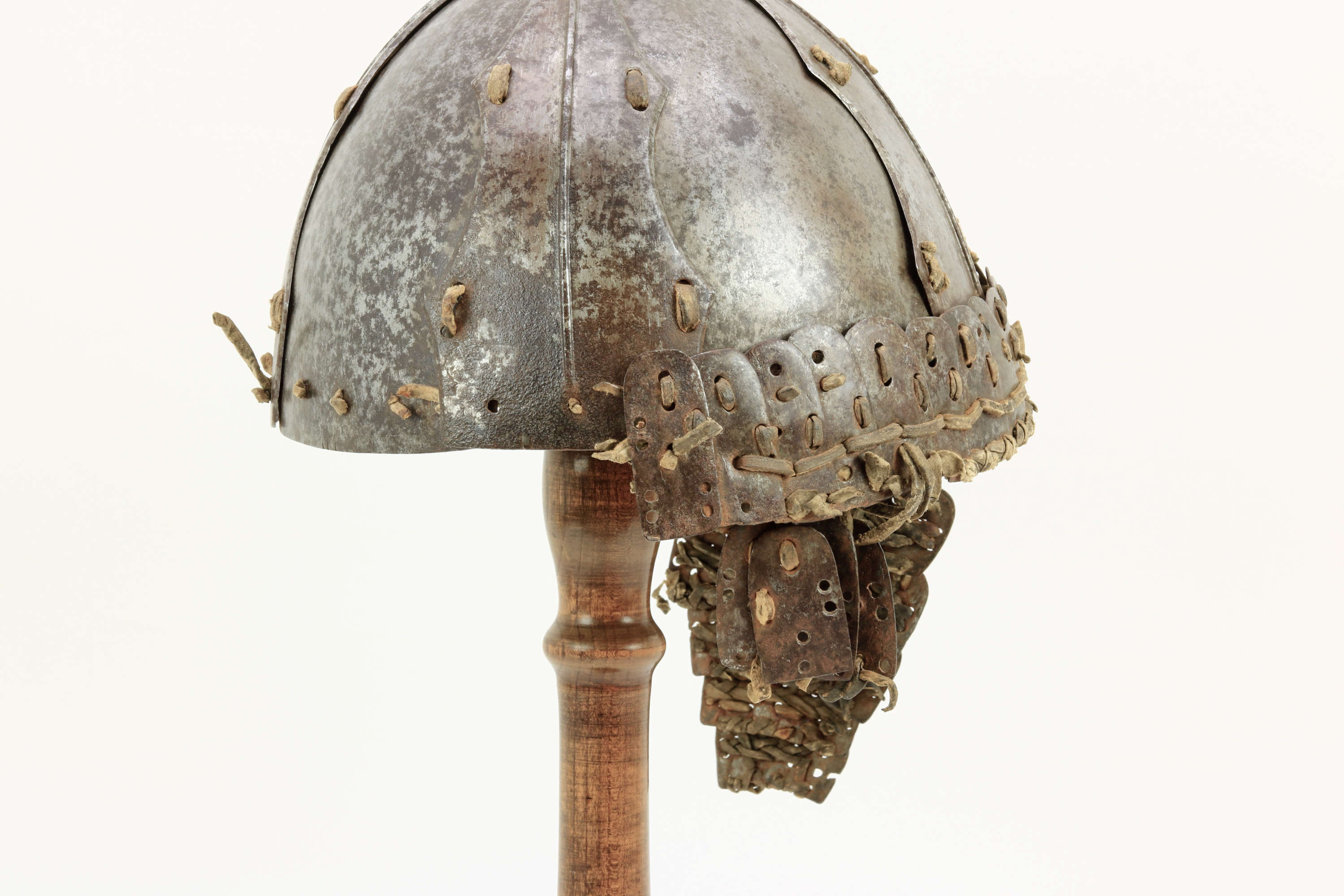 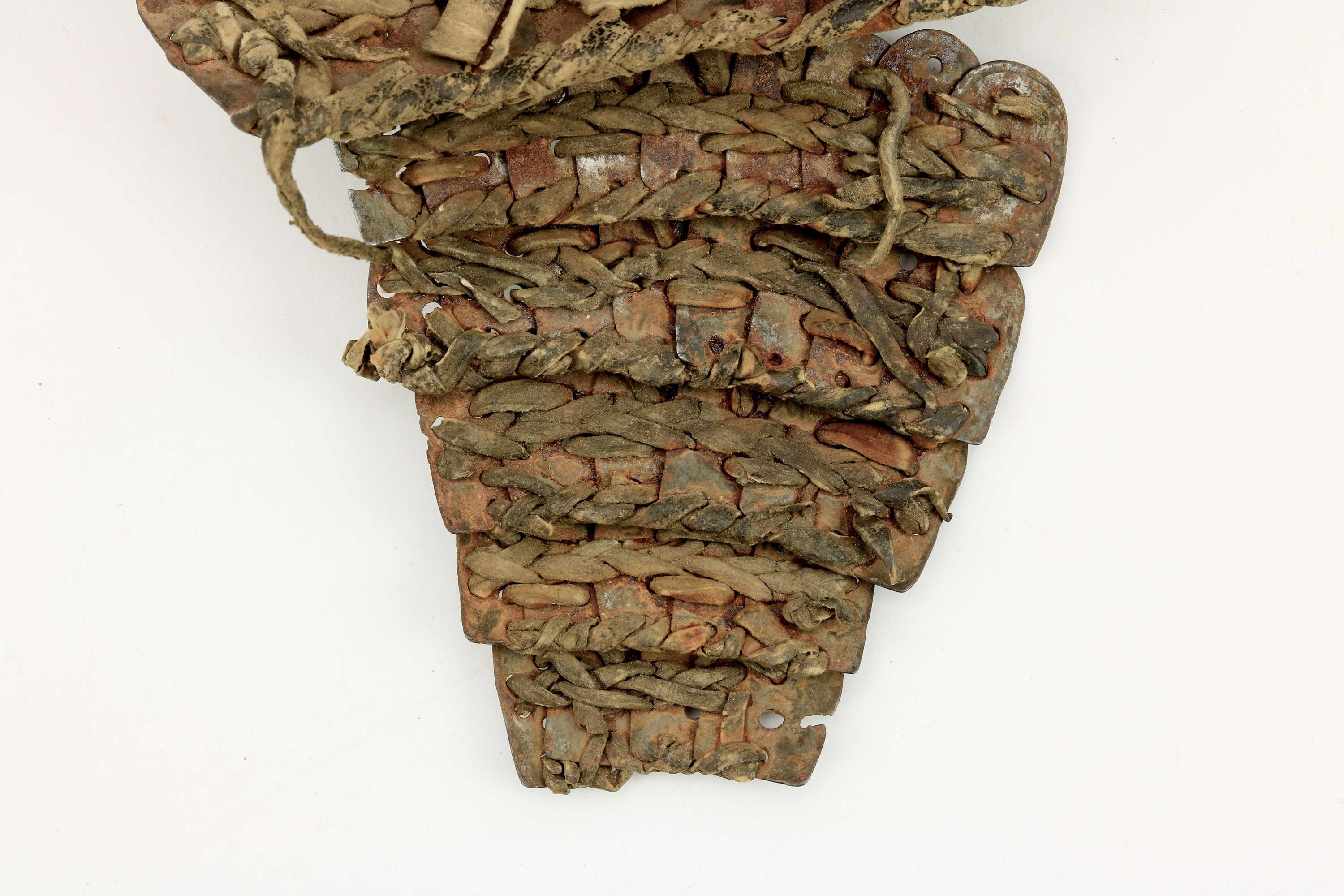 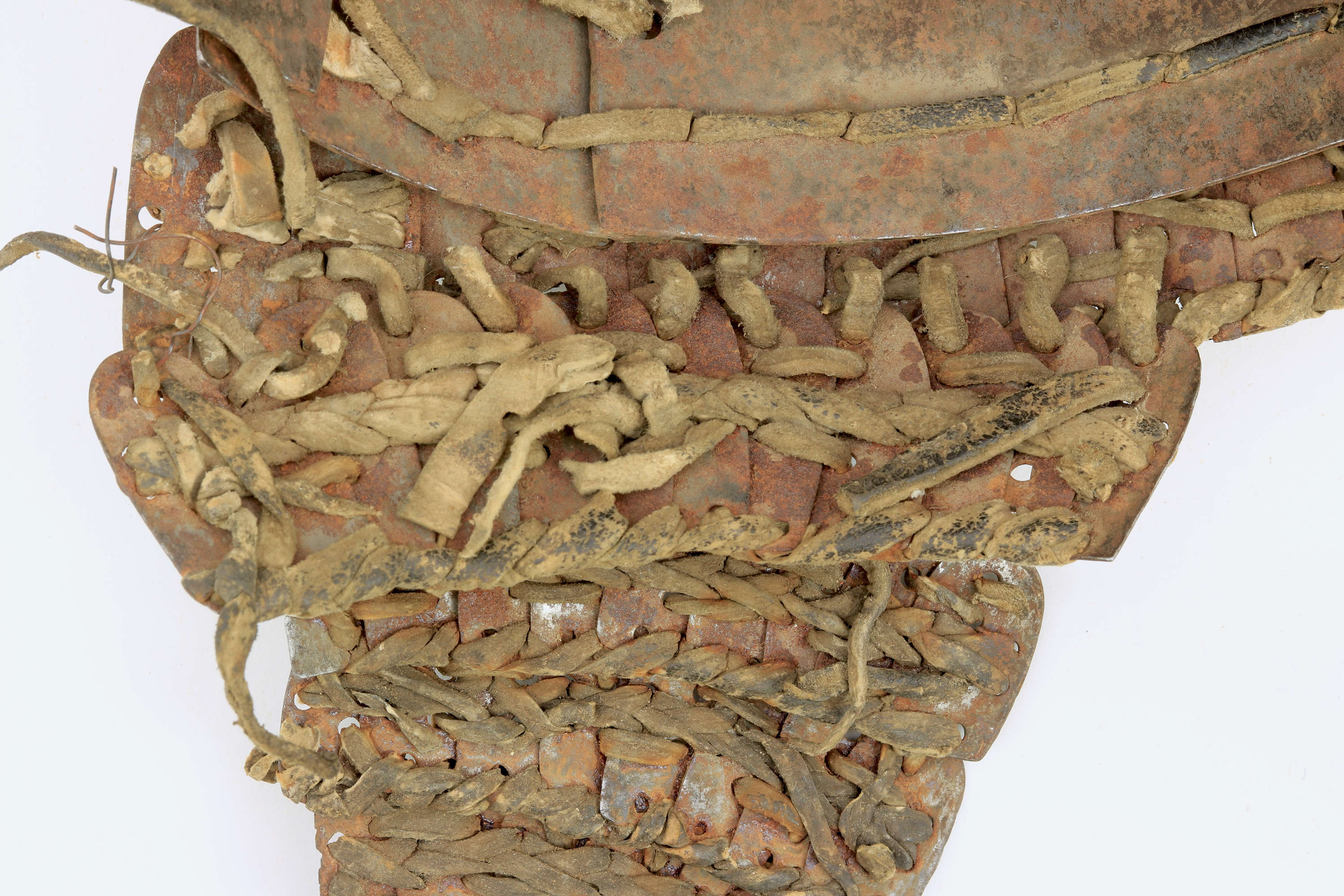 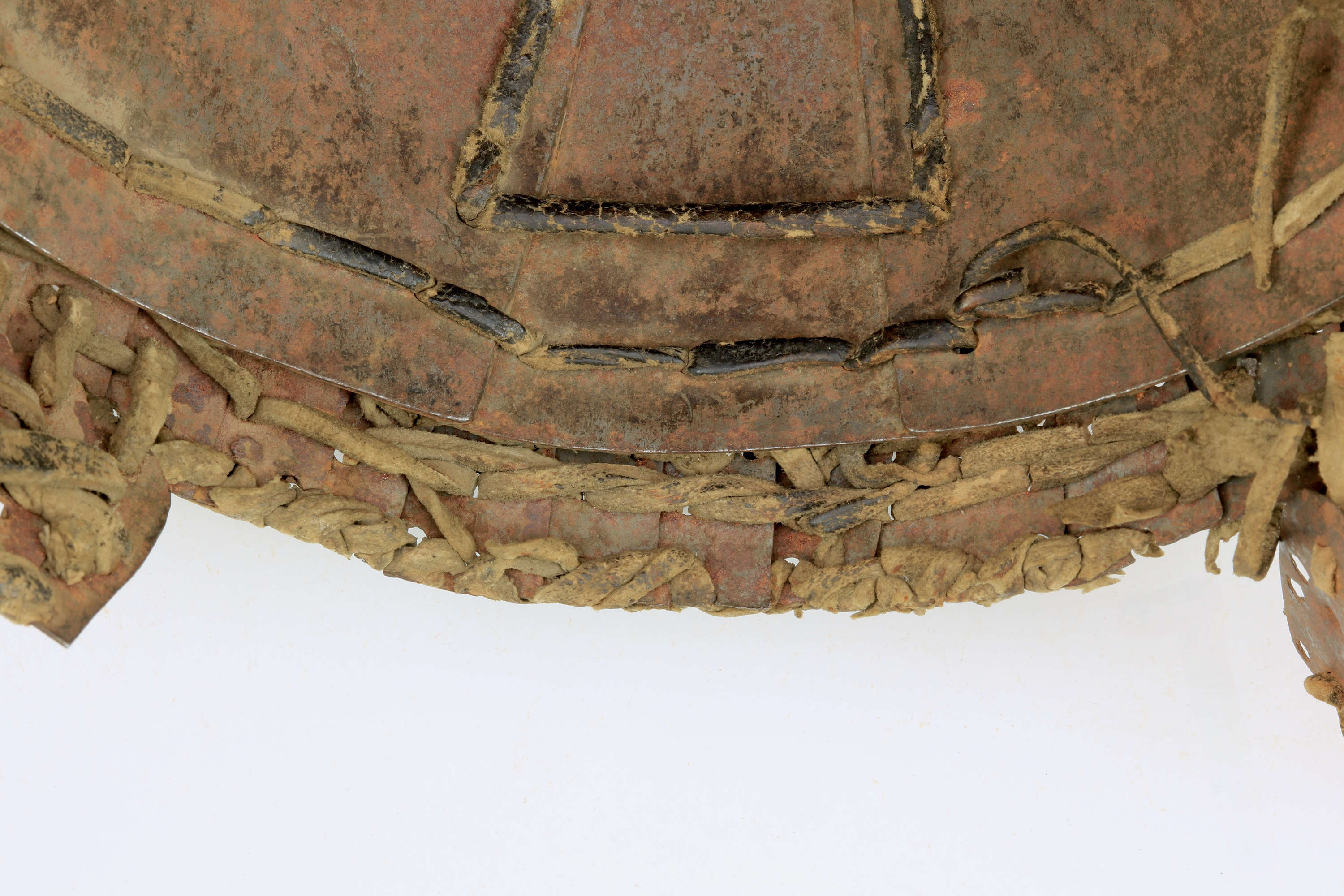 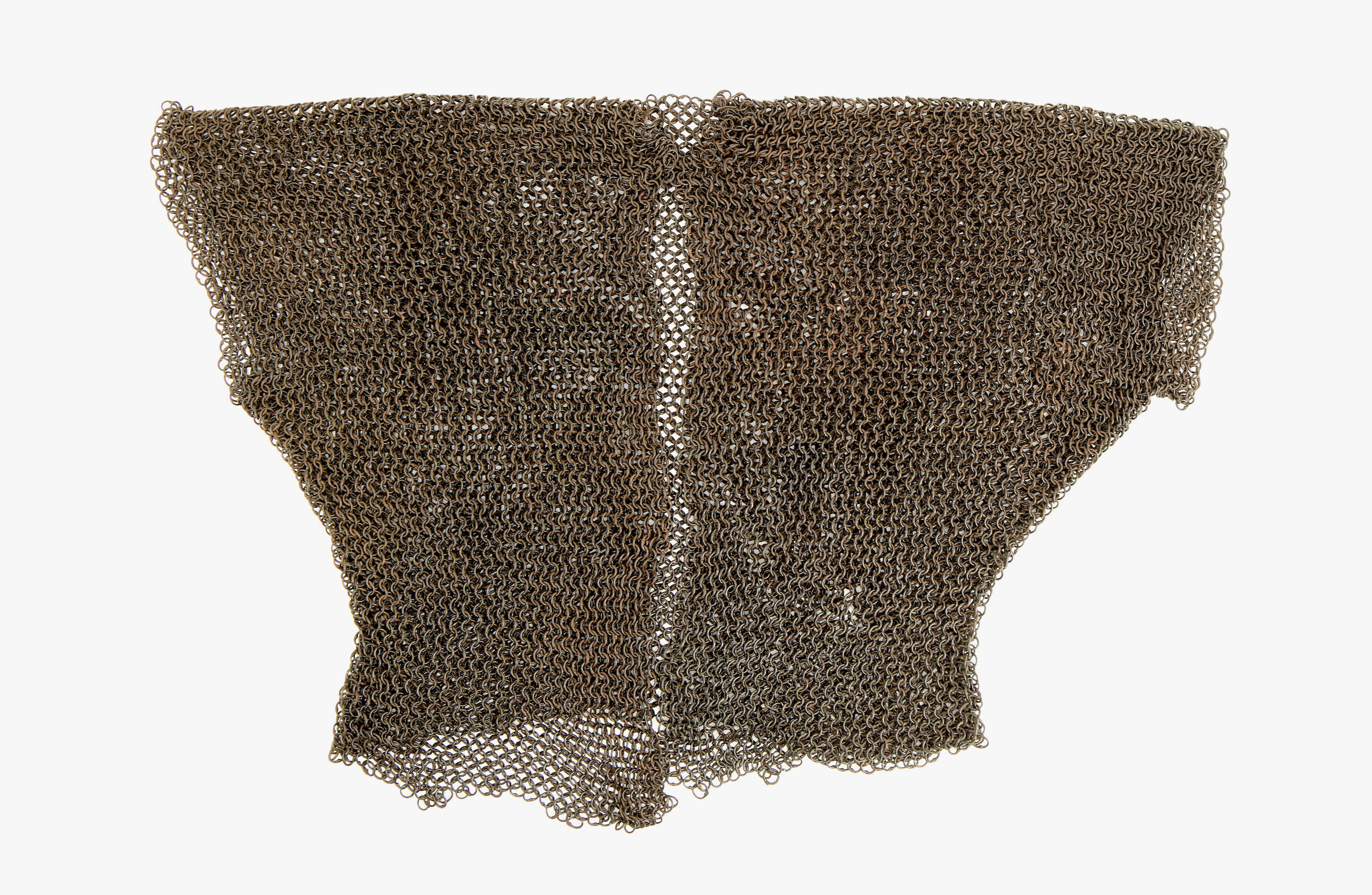 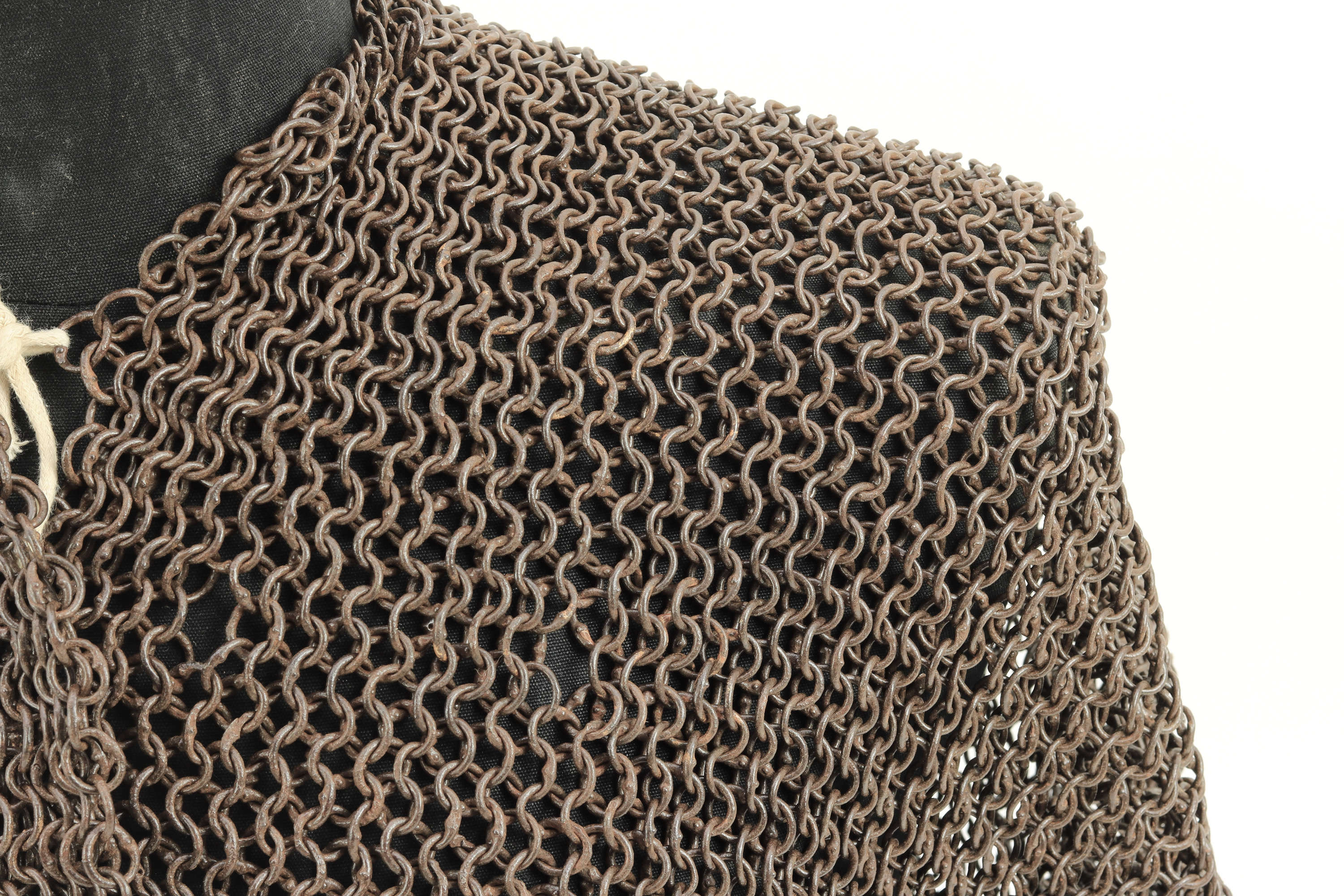 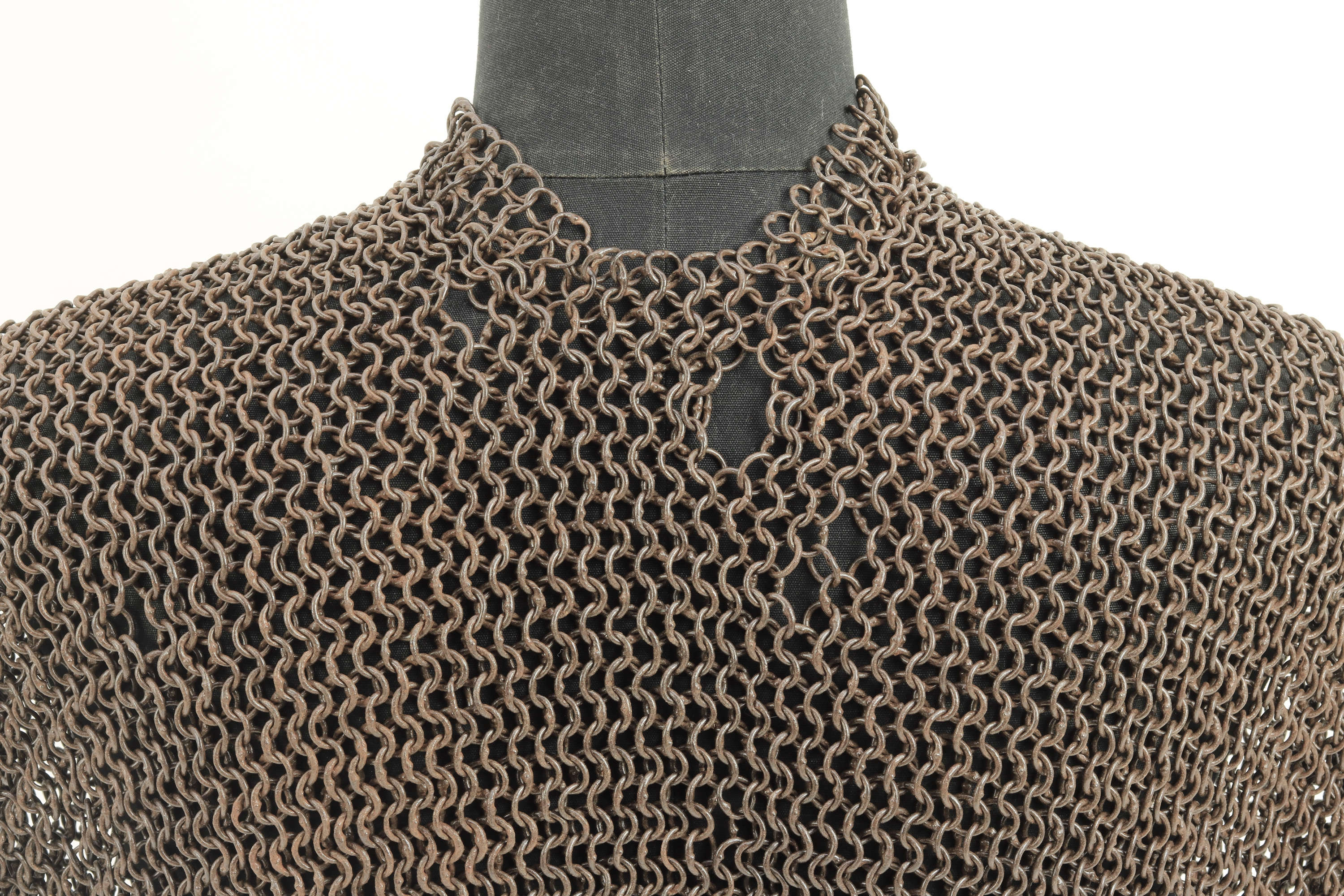 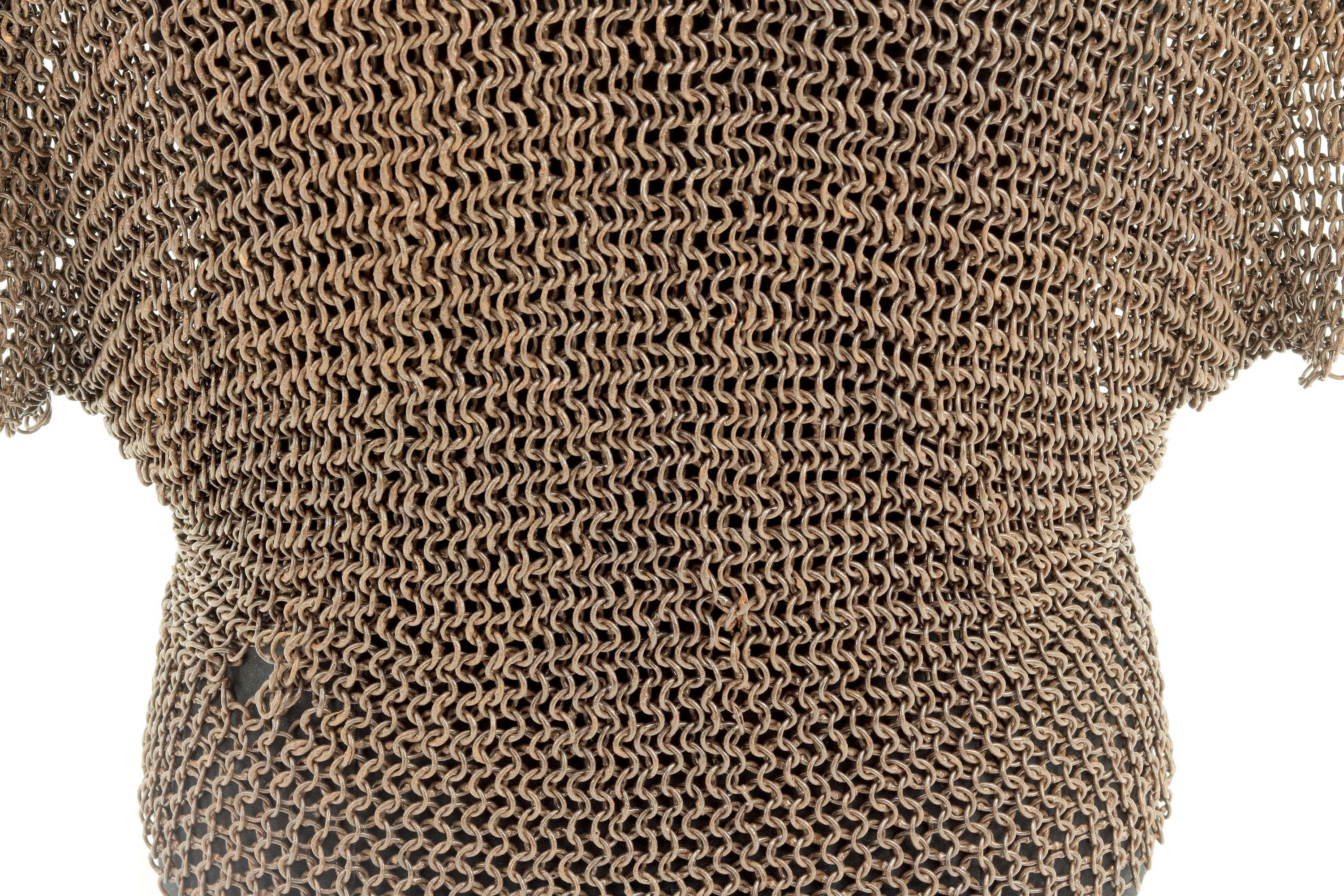 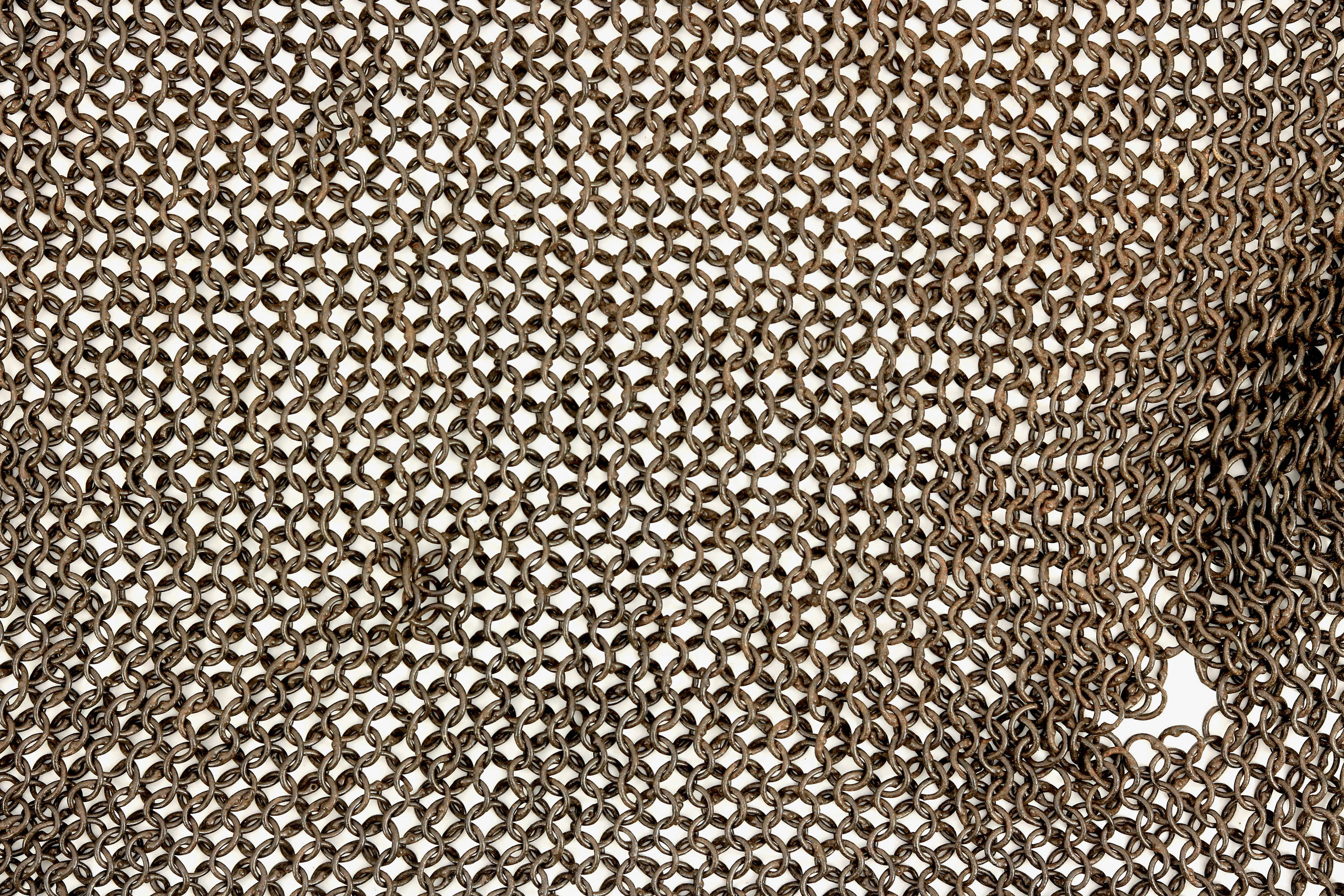 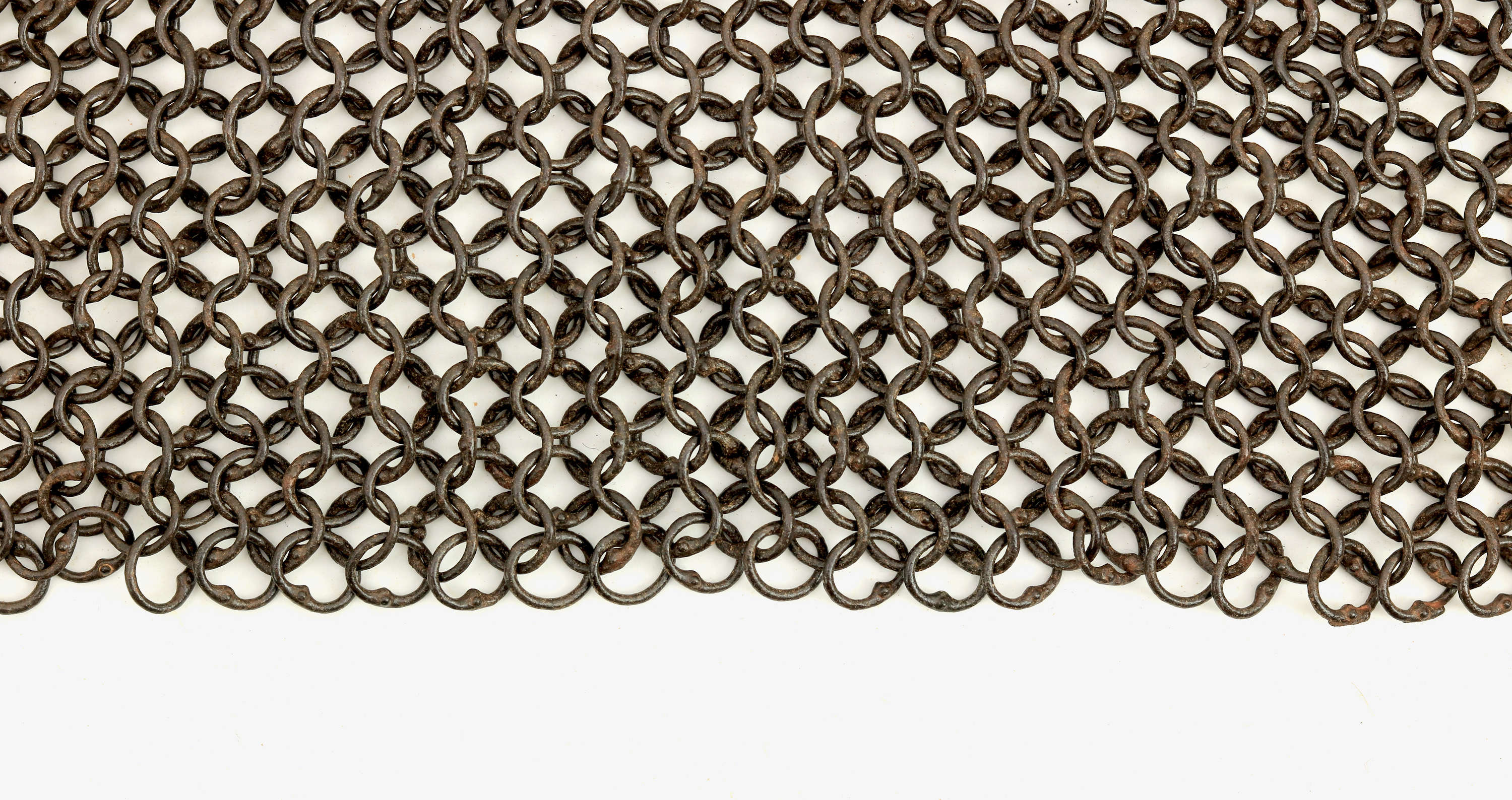 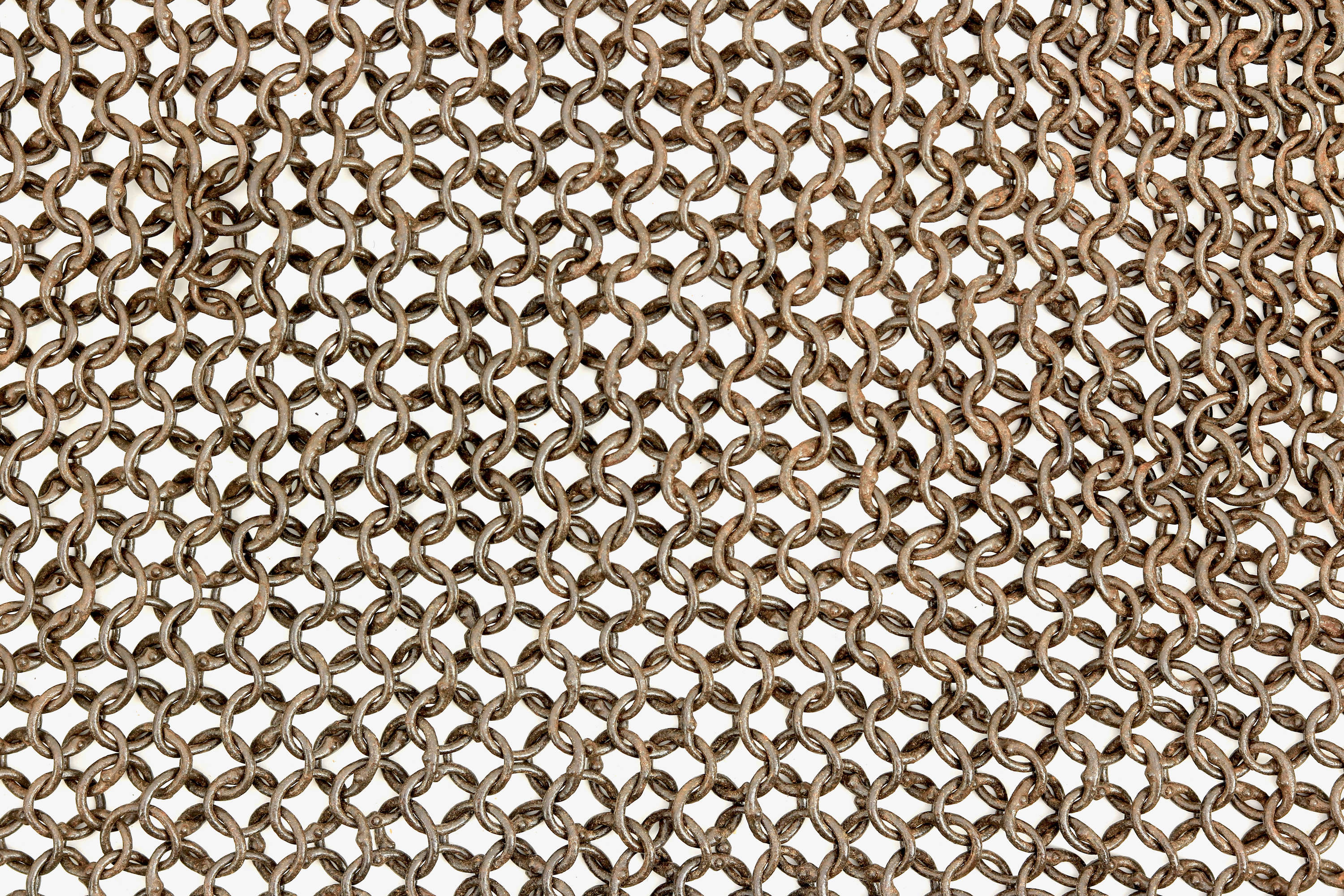 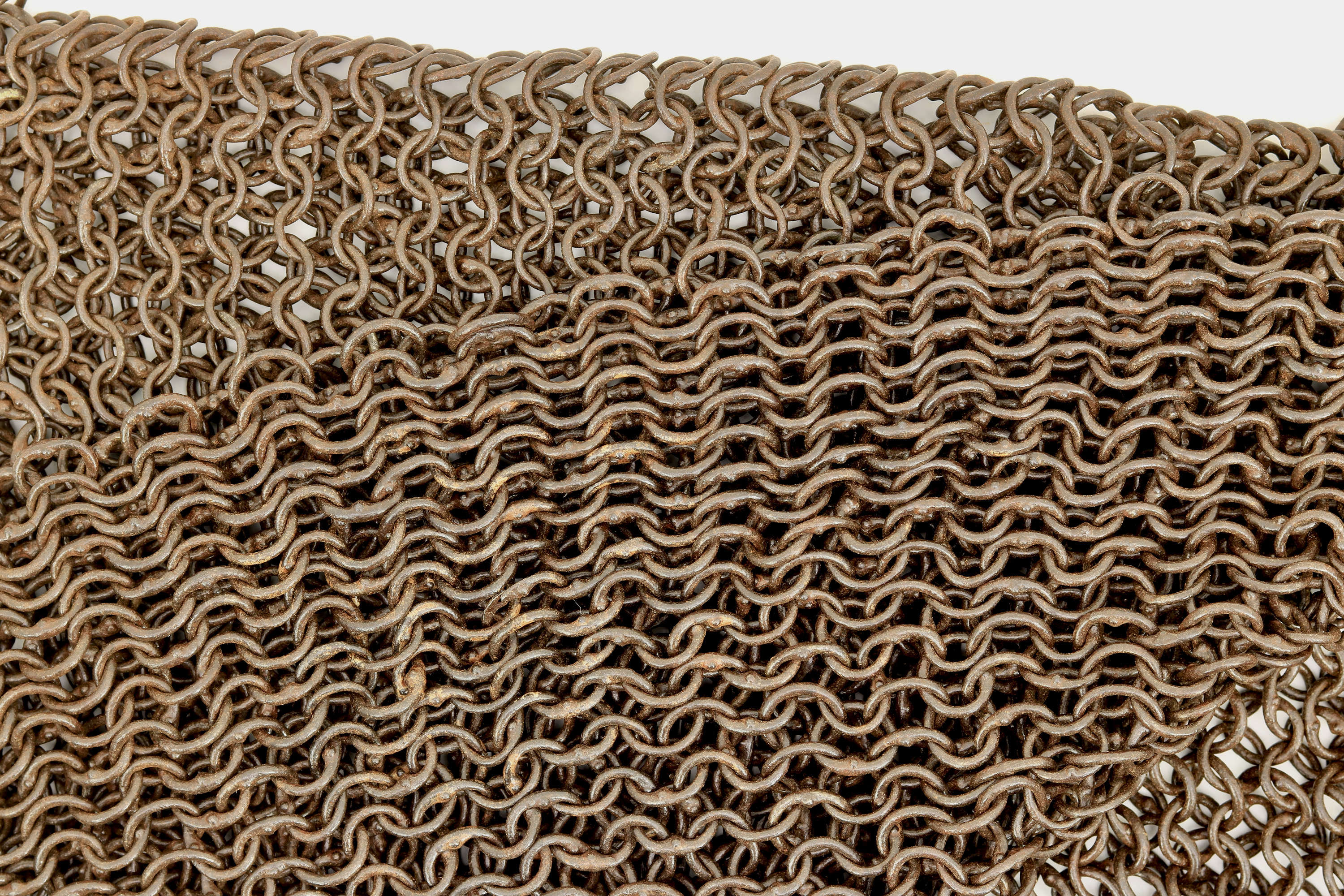 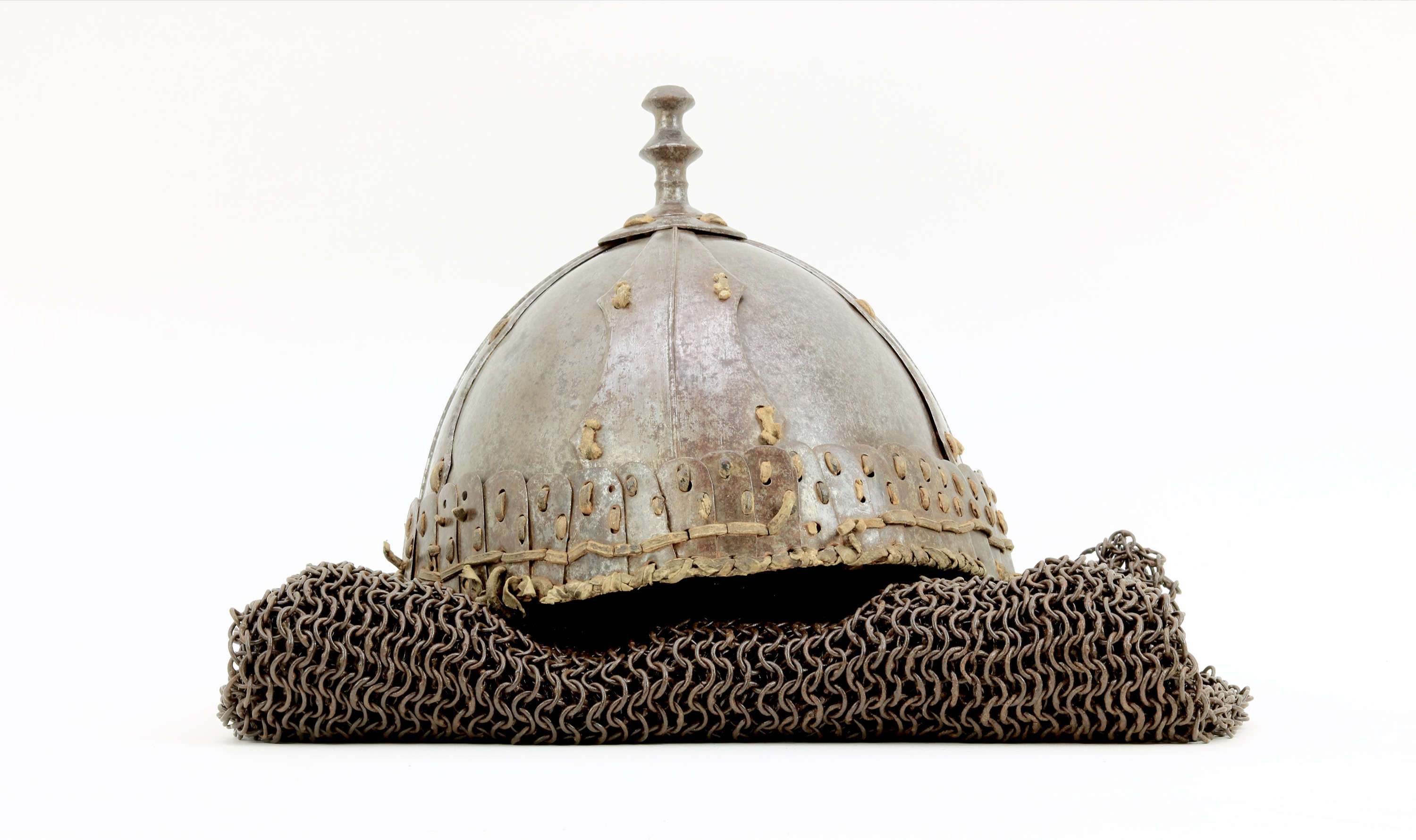 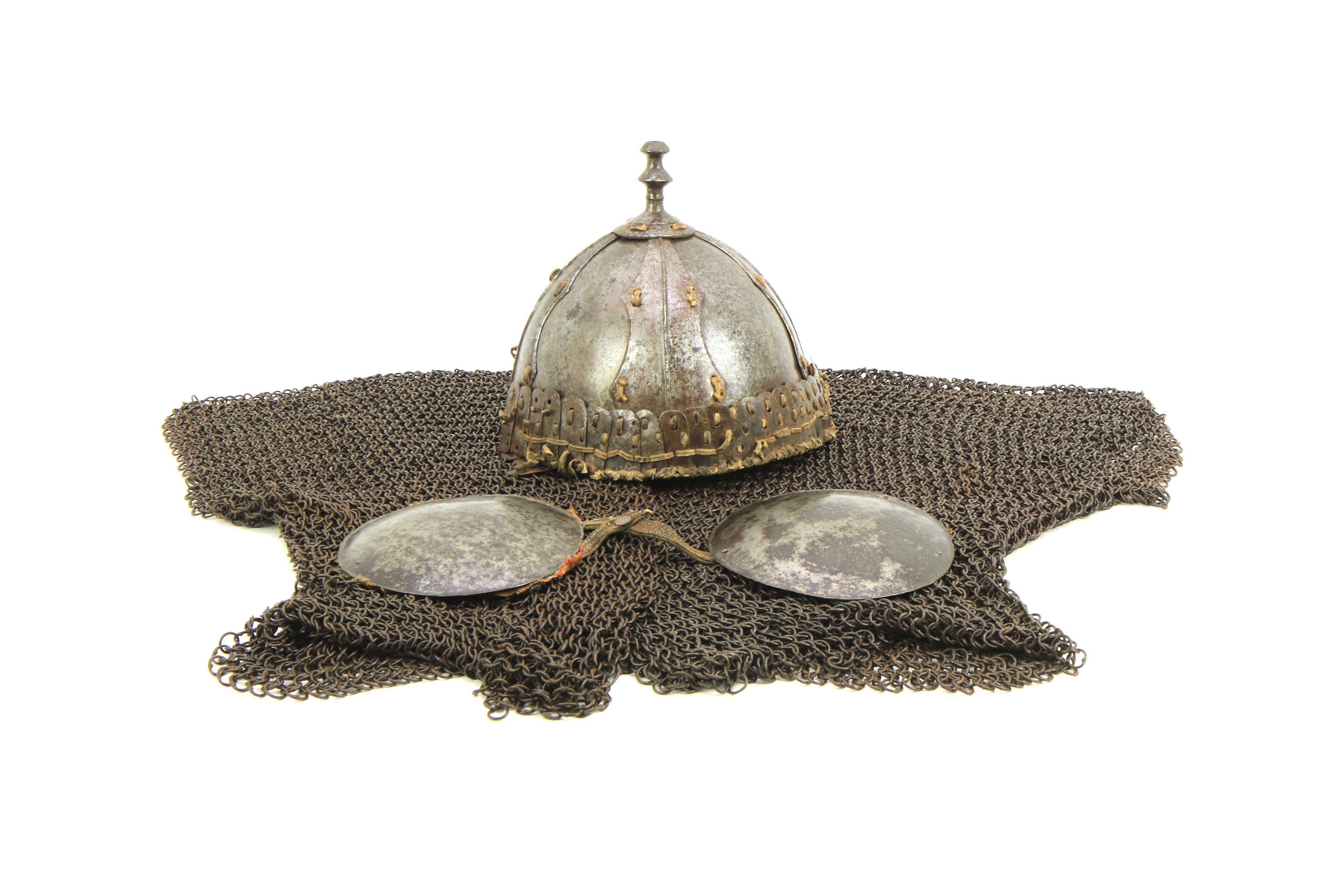