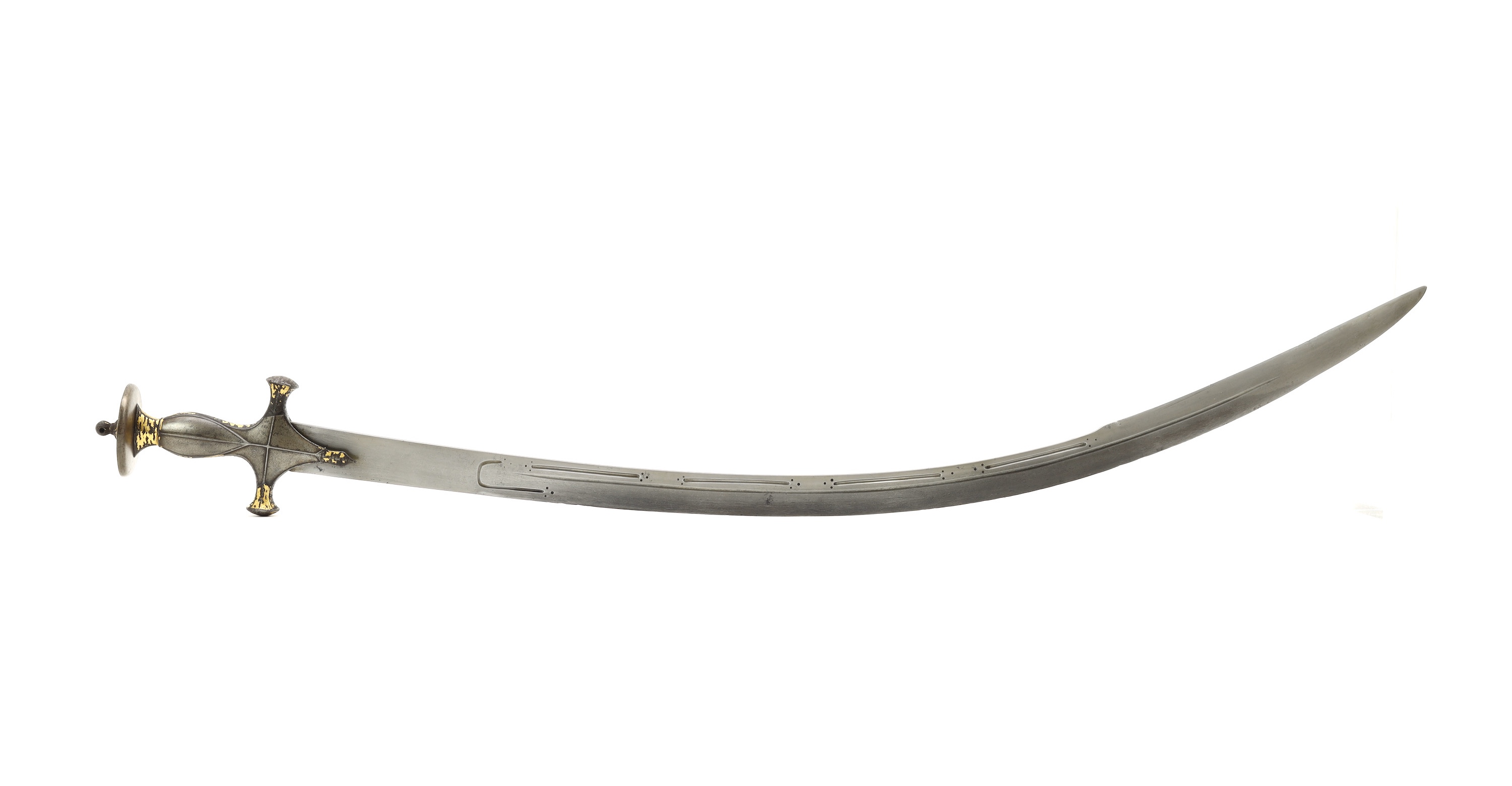 16 cm from center of guard quillons

The narrow, deeply curved blade with strong Persian influence. It has a long, sharp, raised backedge (yelman) and two grooves on either side, one continuous and the upper one segmented. In addition, there are decorative dimples on either side of each segment, appearing in groups of three, and a U-turn groove on the right side. Other Persian design traits are the rounded blade spine and the absence of a ricasso which is always present on Indian talwar.

The blade construction however betrays that it is probably Indian-made. The blade decor isn't as precise as Persian work, and the wootz is a very fine-grained, but lower contrast wootz more often found on Indian arms. An interesting feature is the differential heat treatment that deliberately runs off the blade near the tip. This was probably a functional consideration, hardened wootz gets quite brittle and the double-edged tip is very thin. Hardening it to a high degree would possibly make the tip too fragile. The part now hardened is exactly the part one would use in a close-quarters draw cut that Indian swordsmanship was famous for.

The hilt is also entirely made of wootz and is beautifully proportioned. It is a higher contrast wootz with a very attractive pattern and might have been made from an imported Persian billet, as often used by some of the better armorers in India.

The elegant design features a vase-shaped grip section with a V-shaped top, a pommel with a small dome and upturned rim, and slightly forward inclined quillons. These are all rather northern features, especially Punjabi comes to mind. The decor is less typical for the area, which favored floral or geometric patterns. On this hilt, we see patches with stylized tiger stripes in gold. And when the Indian arms enthusiast thinks tigers, he thinks Tipu.

Tipu's own swords were very distinct, and this certainly is not one of them. (I wish!) But, a sword with a quite similarly shaped hilt bears inscriptions stating that it was owned by the father of the Tipu Sultan: Hyder Ali Khan. This shows that the general northern style was carried in south India at the time, probably due to their allegiance with the Mughals whose seat of power was in Delhi where these hilts were popular.

That sword is now in the Royal Collection Trust, accession number RCIN 67217. 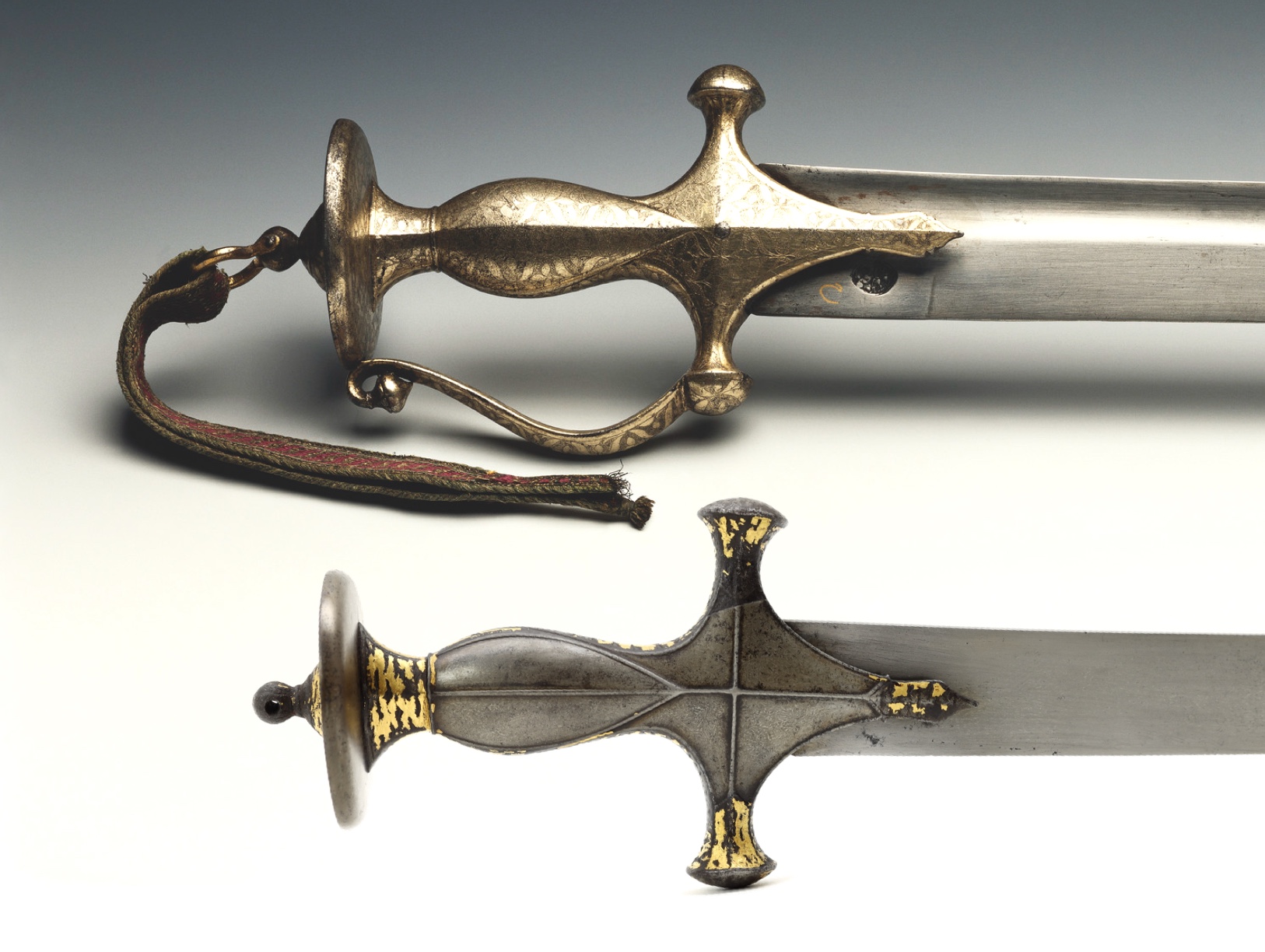 Comparing the two hilts there are some striking similarities in form, such as the vase-like grip that transitions into the guard with a deep V, the shape and style of pommel plate and dome, overall proportions, and the contours of the langets. There are also some departures: Mainly the less domed shape of the quillon ends of our current example, and the absence of a knuckle guard. Another difference is the strongly raised ridges on ours, absent on Hyder Ali Khan's sword.

Is there a connection to the Tipu Sultan? Tipu was famous for his tiger imagery but certainly did not have a monopoly on it. However, the decor isn't typical at all for northern swords. It may have been from that general area, taking inspiration from the local court's obsession with tigers. Of course, there could be no relation at all, but it gives us something to ponder over.

Blade and hilt were cleaned and lightly etched to reveal their patterns. The hilt has a period repair to one quillon, skilfully done and old. Some minor edge damage to blade, and minor distortions in the contours from sharpening and grinding after use. Some patches of pitting remain. Blade is straight, sits tight in hilt, with original pitch intact. No scabbard. 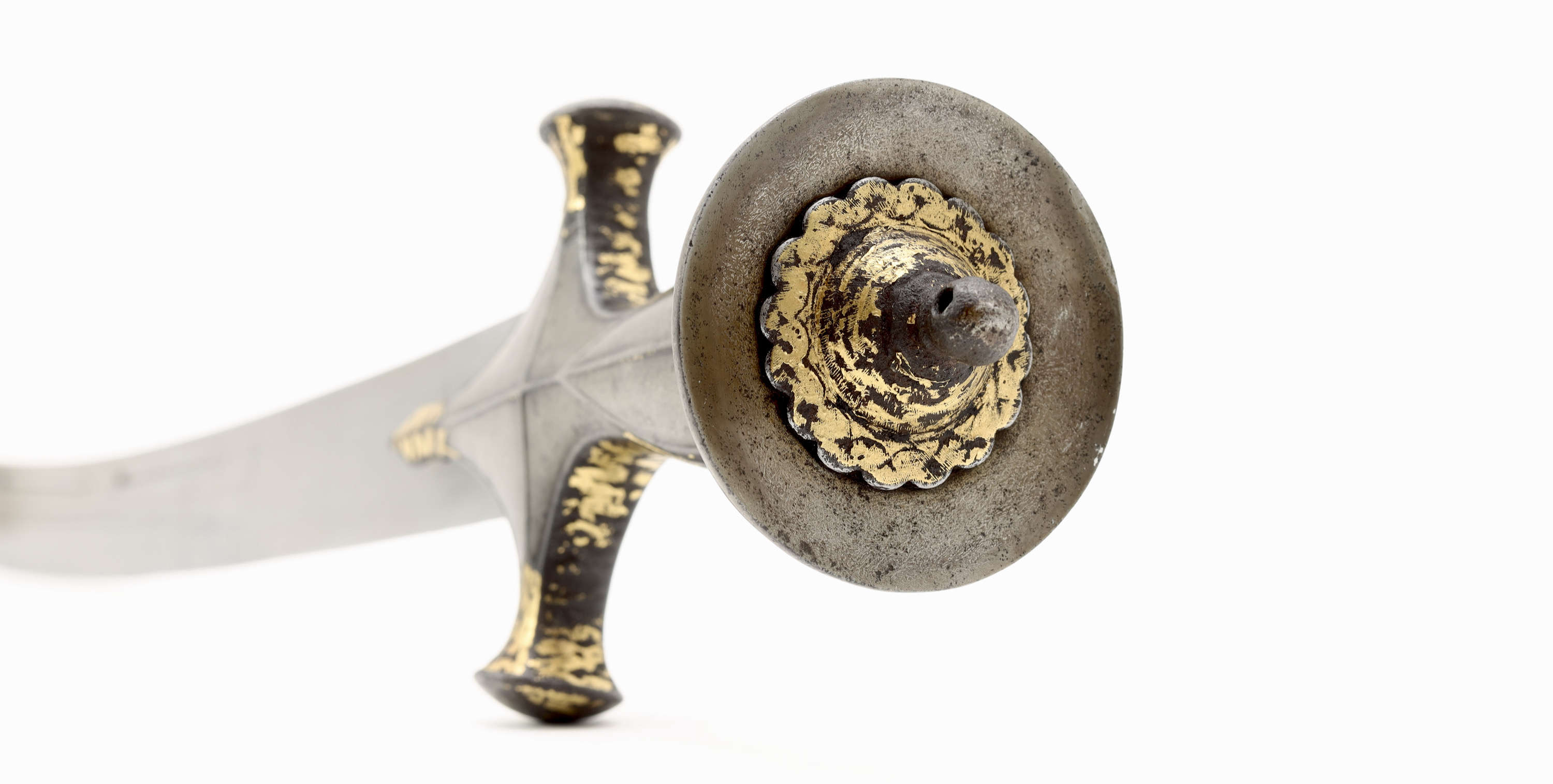 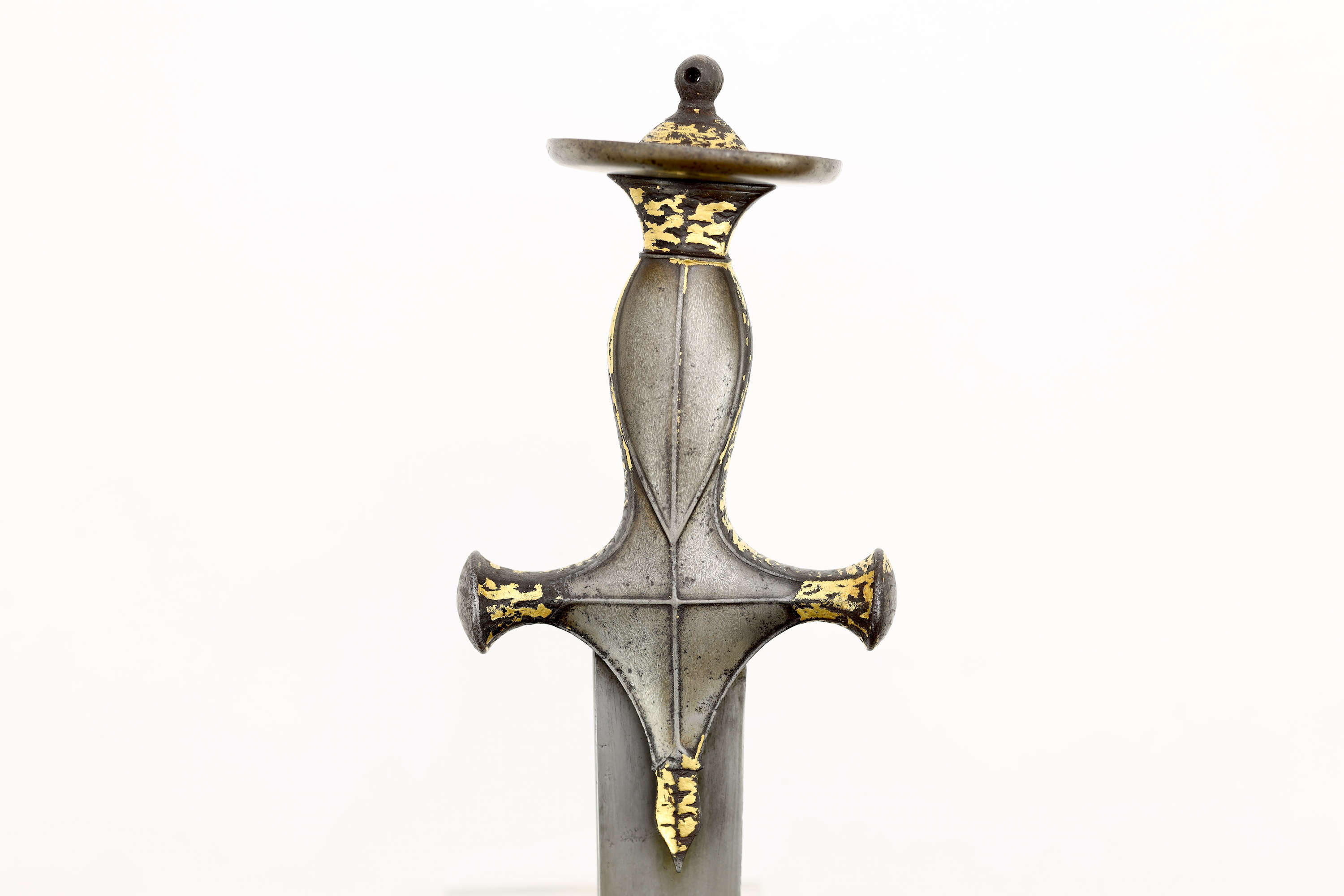 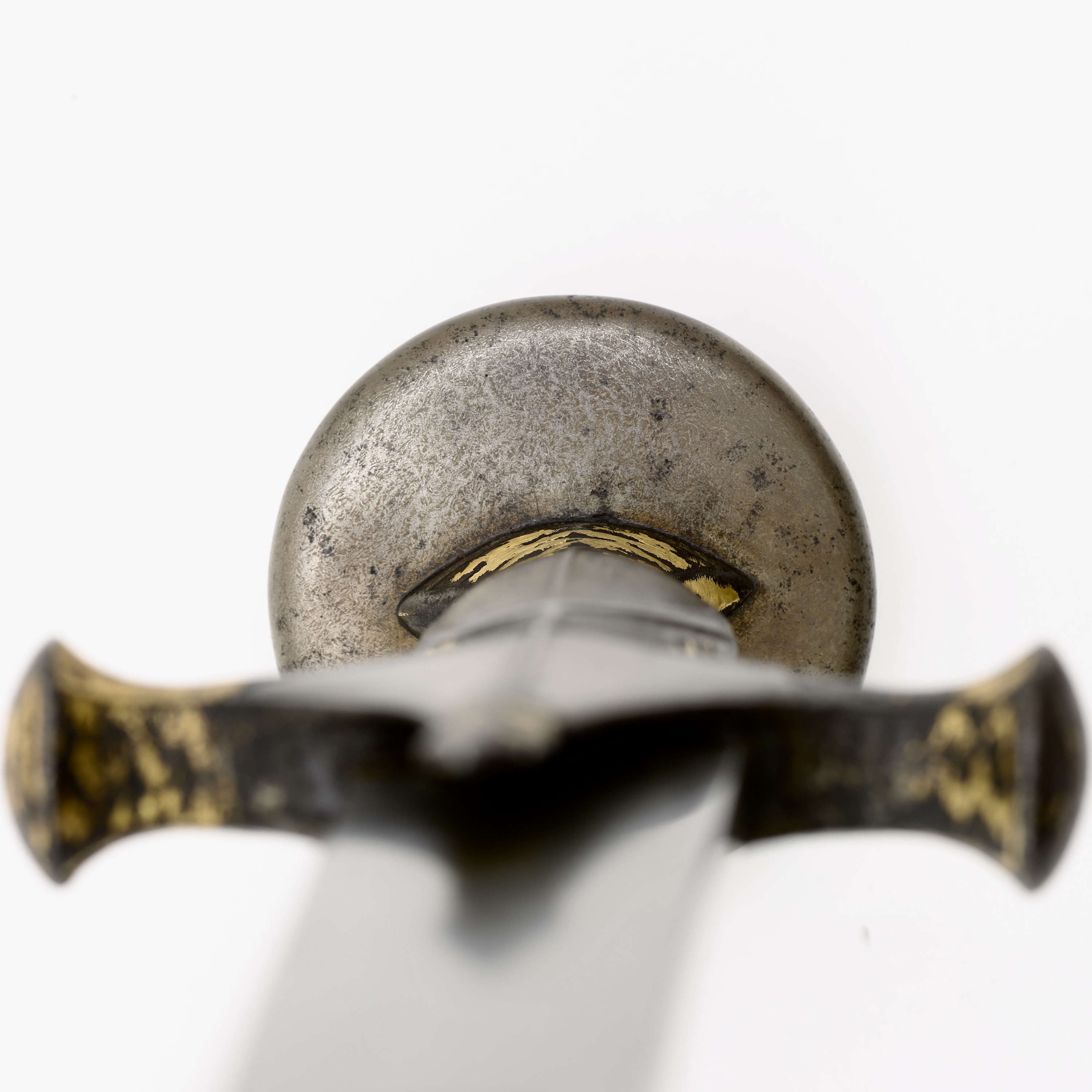 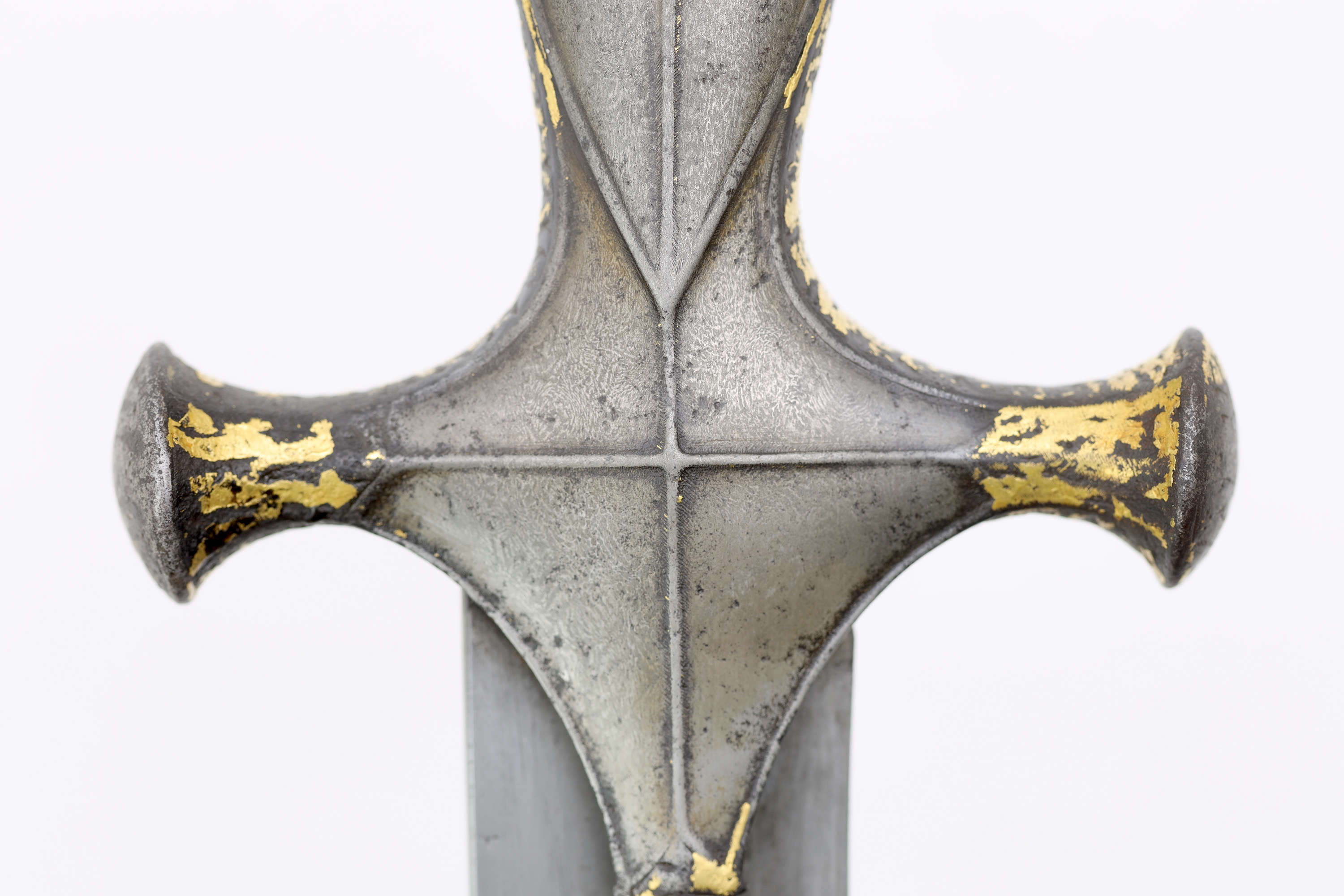 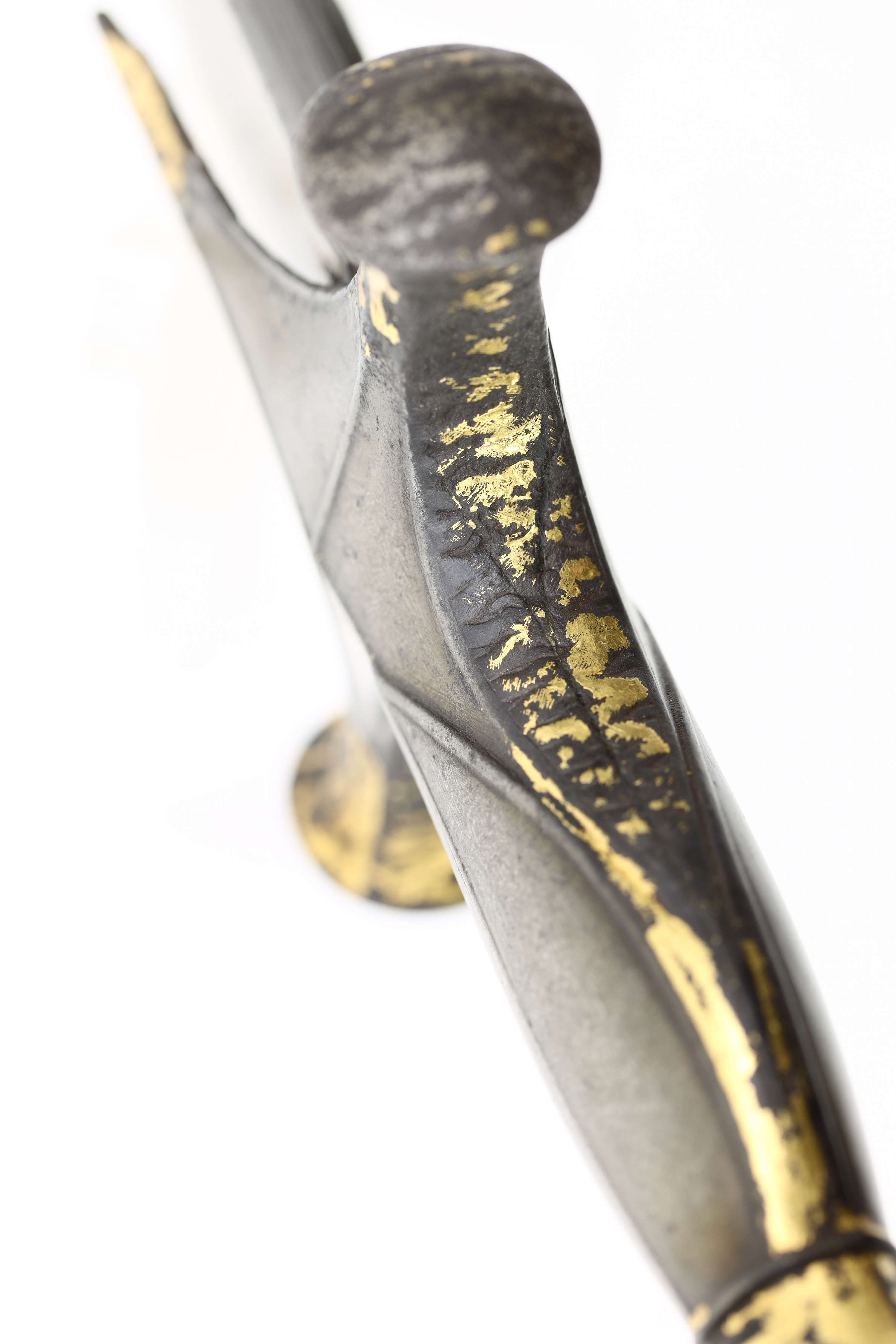 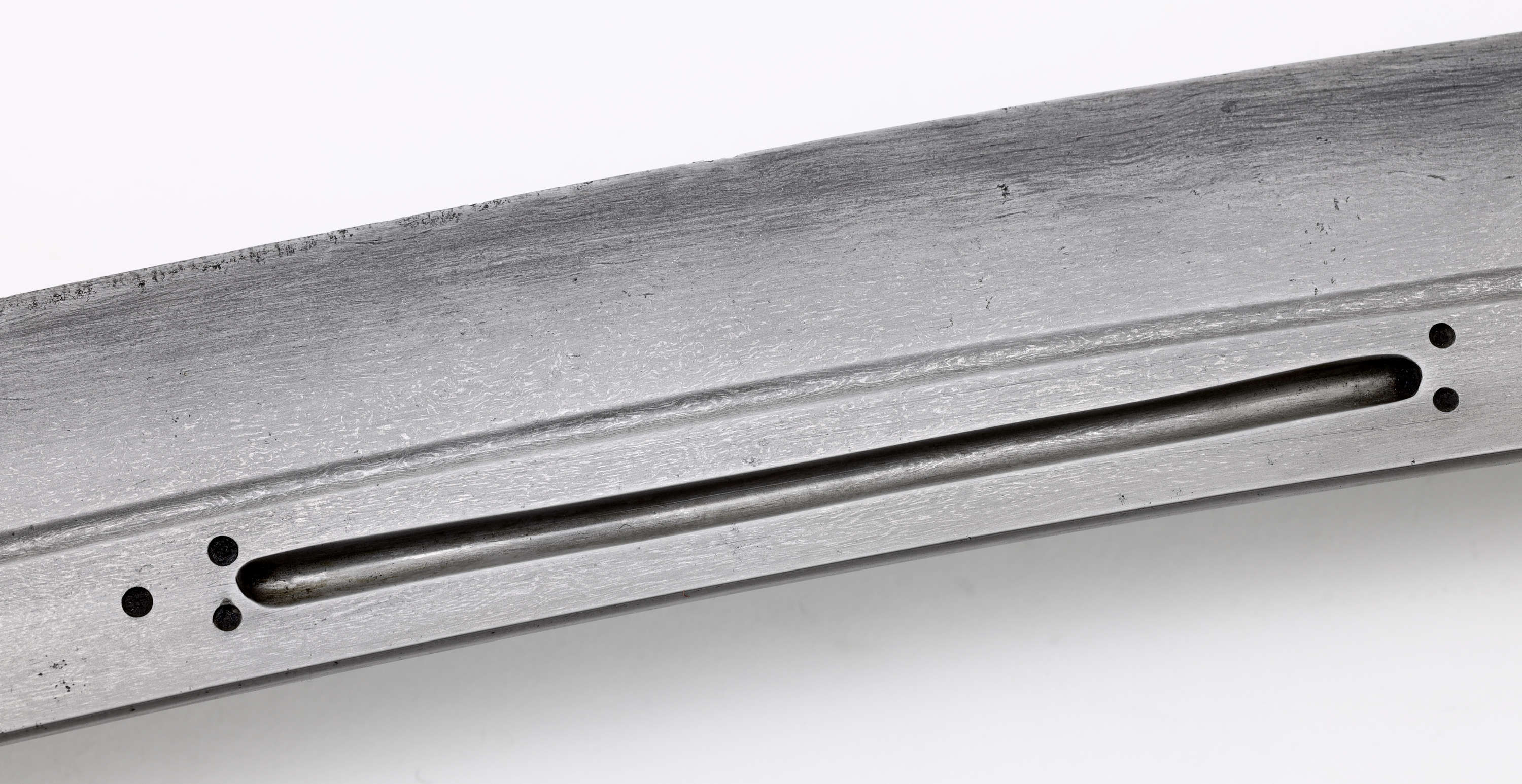 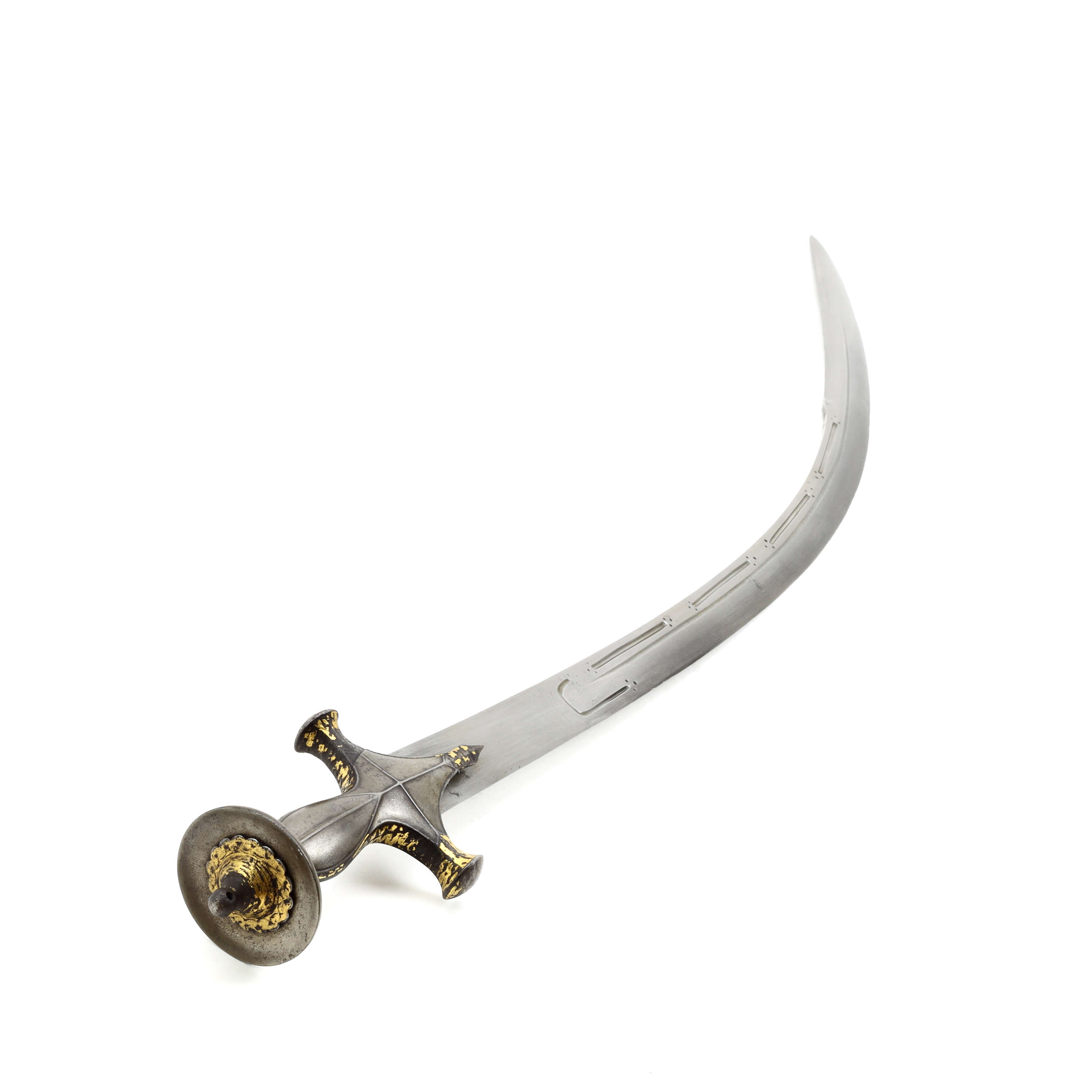