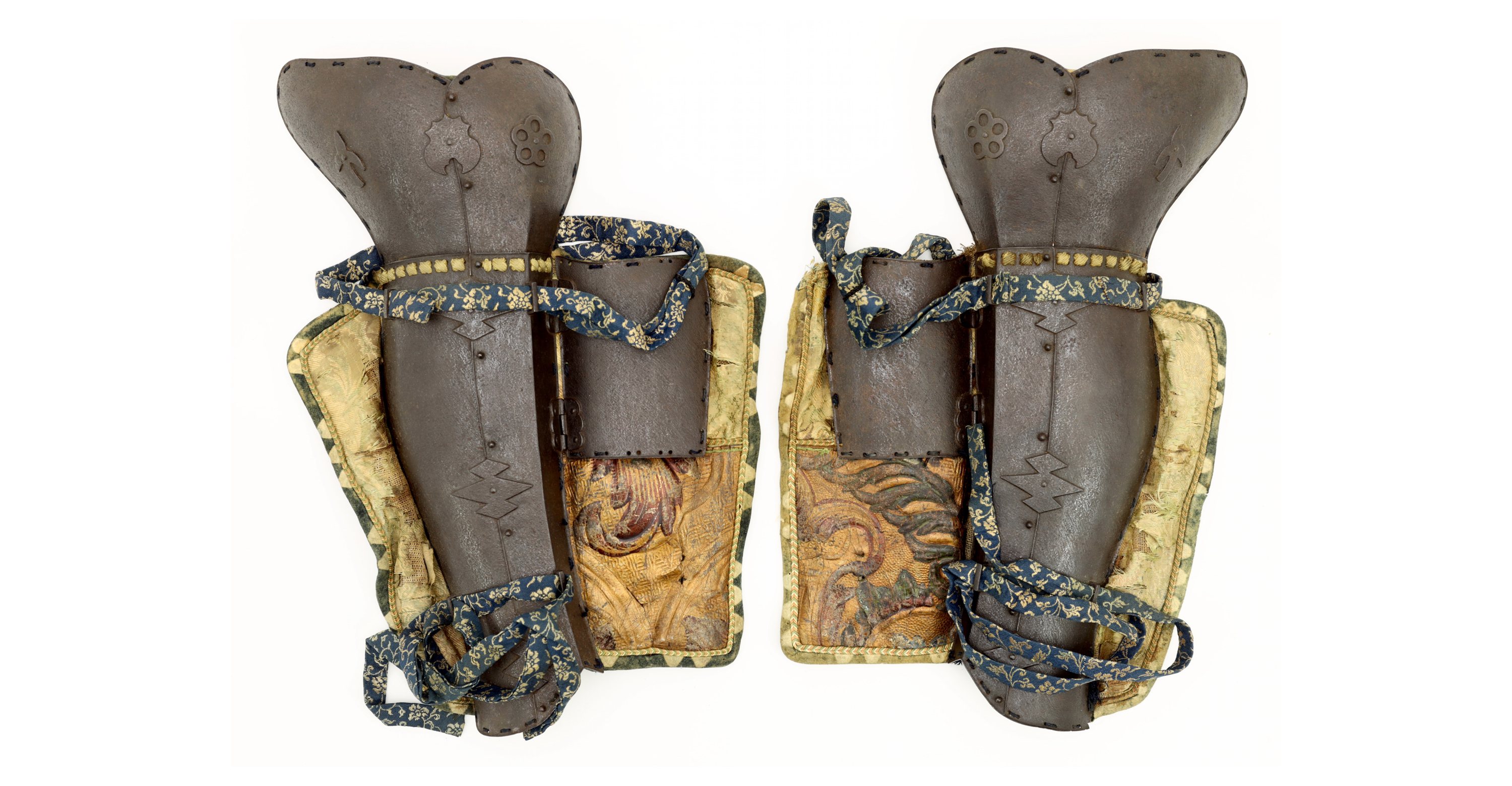 A pair of otateage suneate, plate shin protectors for a samurai armor. Each piece consists of five steel plates, two pieces riveted together make the knee-piece, laced to two plates for the shin piece which are also riveted together, and lastly a hinged part for the inner leg. The outside of the plates with russet iron finish, with diagonal file marks. The insides are lined with indigo dyed cotton and the outside has silk brocade with suede bordering.

Otateage suneate of this style were worn among others by Date Masamune, as seen on his famous armor from Sendai museum in Japan.1 Date Masamune was a powerful daimyō of the Tōhoku region, and a notable warrior and tactician. He was also very much interested in international trade and famously funded a succesful Japanese expedition to the Pope of rome, using a ship built in the Western style.

The plates are decorated with a number of symbols, mon. Among which we can recognize the Omodaka mon (water plantain) and most prominently features the Matsukawa-bishi mon (pine bark) used by the Ogasawara, a branch of the Takeda clan.

Historically, the Takeda had their home base in Kai Province and the Ogasawara in Shinano Province, both bordering Tohoku which was ruled by Date Masamune.

An unusual feature of this set of suneate is the application of Dutch gilded leather, called "goudleer". It was originally meant as a very expensive wallpaper used in castles and large mansions. Some of it, brought into Japan, caught the eye of samurai and it has since been used on sword scabbards and pieces of armor.

One such piece is the above aikuchi, made using an early 17th century German Solingen blade, re-shaped and re-tempered in Japan in the Japanese style. The scabbard is covered with a type of goudleer that is nearly identical to that found on our suneate. The mon on the scabbard are of the powerful Matsura clan, who governed the Island of Hirado where the VOC had a base until 1641.

Goudleer has been produced in the Netherlands since at least 1504, but it was in 1611 that the first shop in Amsterdam was opened. In 1628 The Hague-based maker Jacob Dircxz de Swart first started to emboss the leather. At some point, there were about 11 shops active in Amsterdam, one of them processed 16.000 calf hides annually. The rise of wallpaper eventually put the industry out of business, the last makers closed their shops in Amsterdam in 1680.2

Everything is original, save for the blue straps which are new. The silk brocade is in poor shape, as are some of the bads that tie the knee pieces to the shin pieces. Otherwise in pretty good state or preservation. See photos. 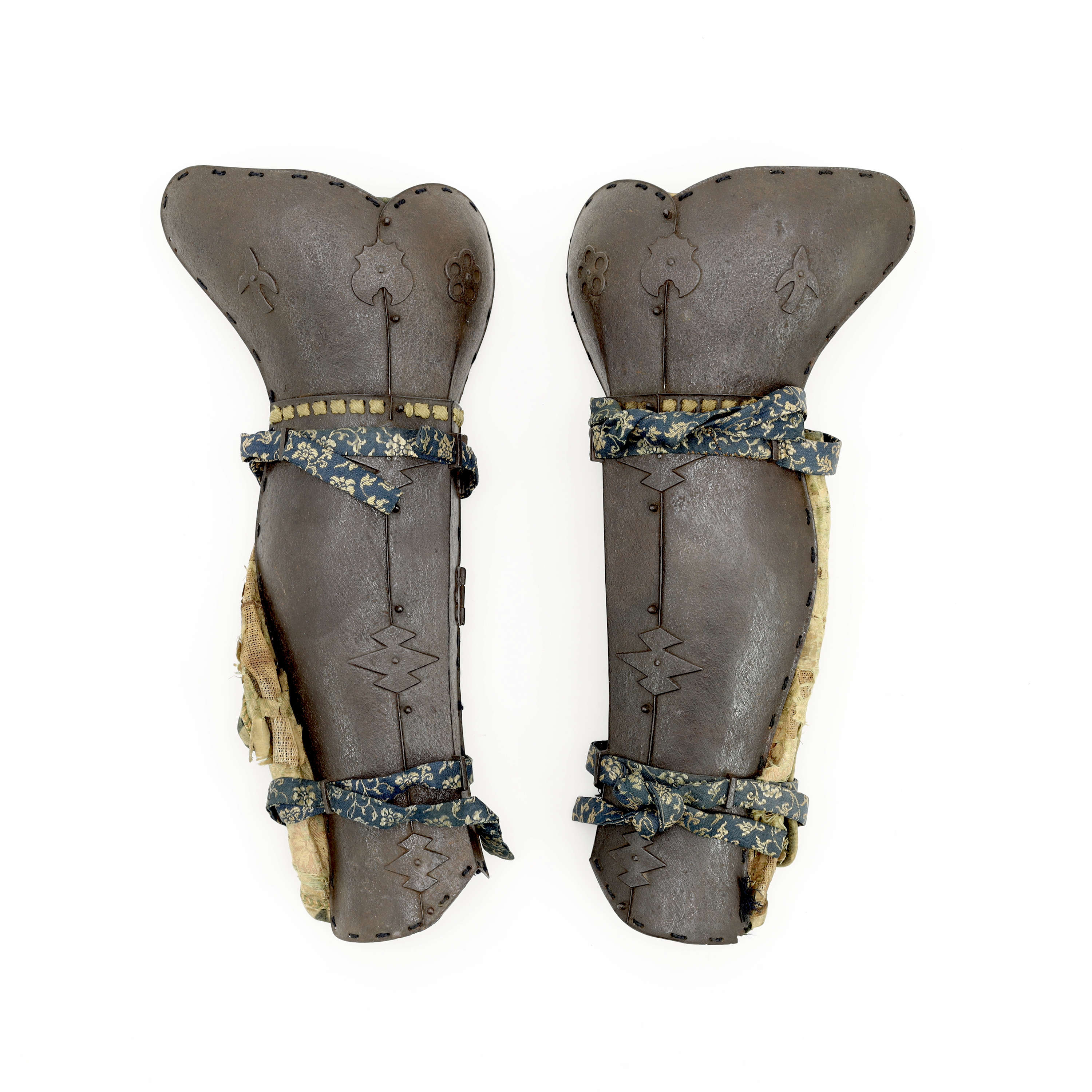 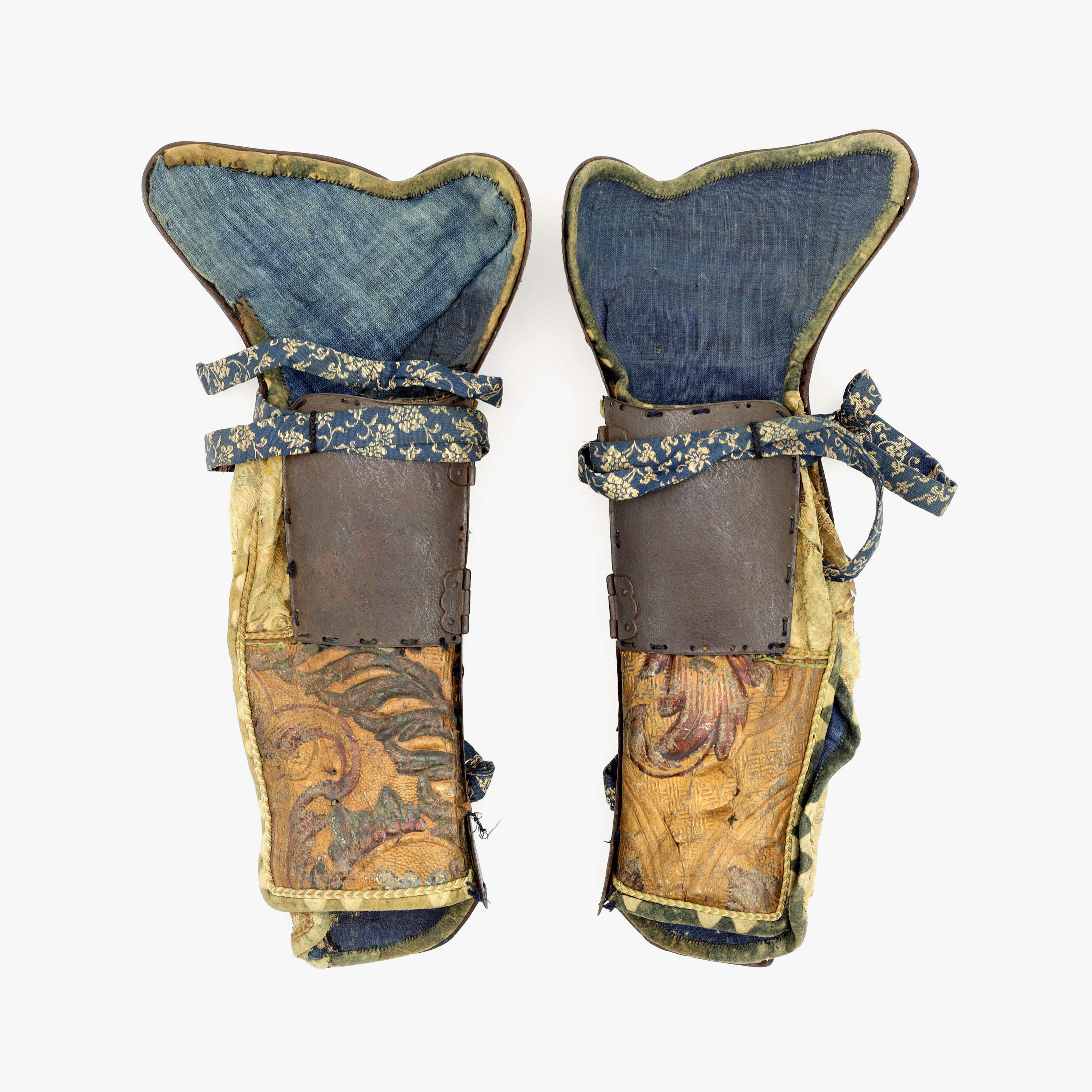 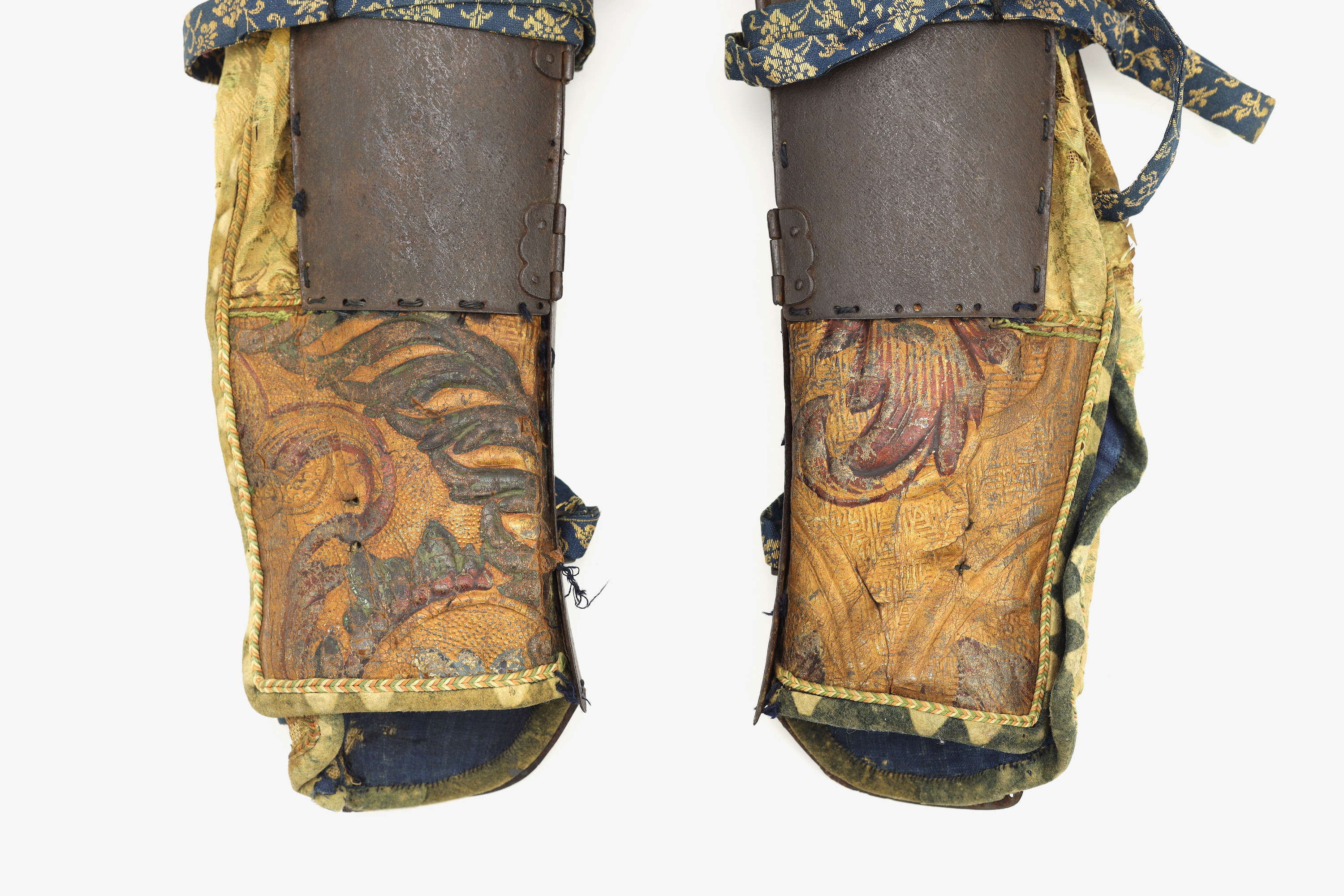 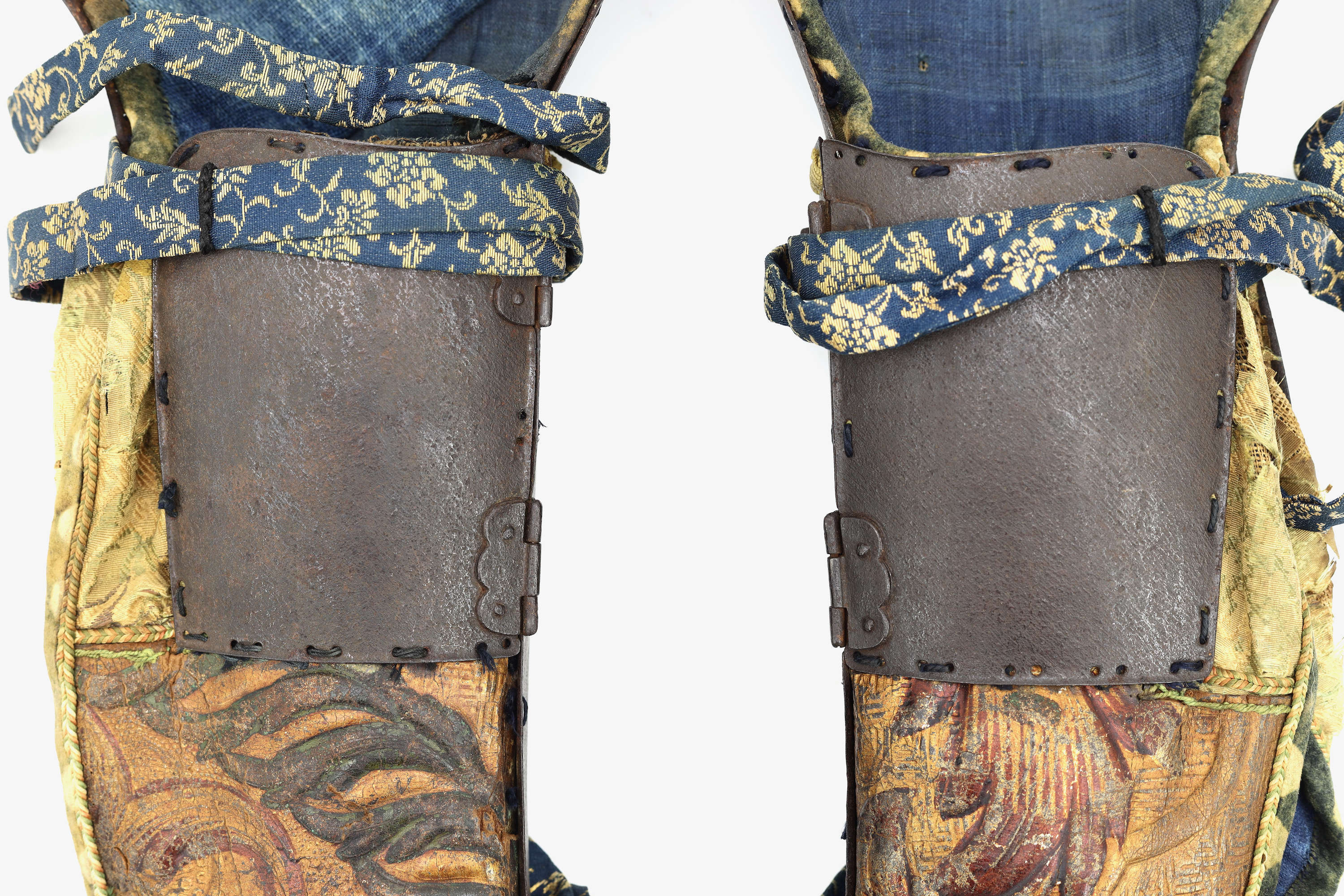 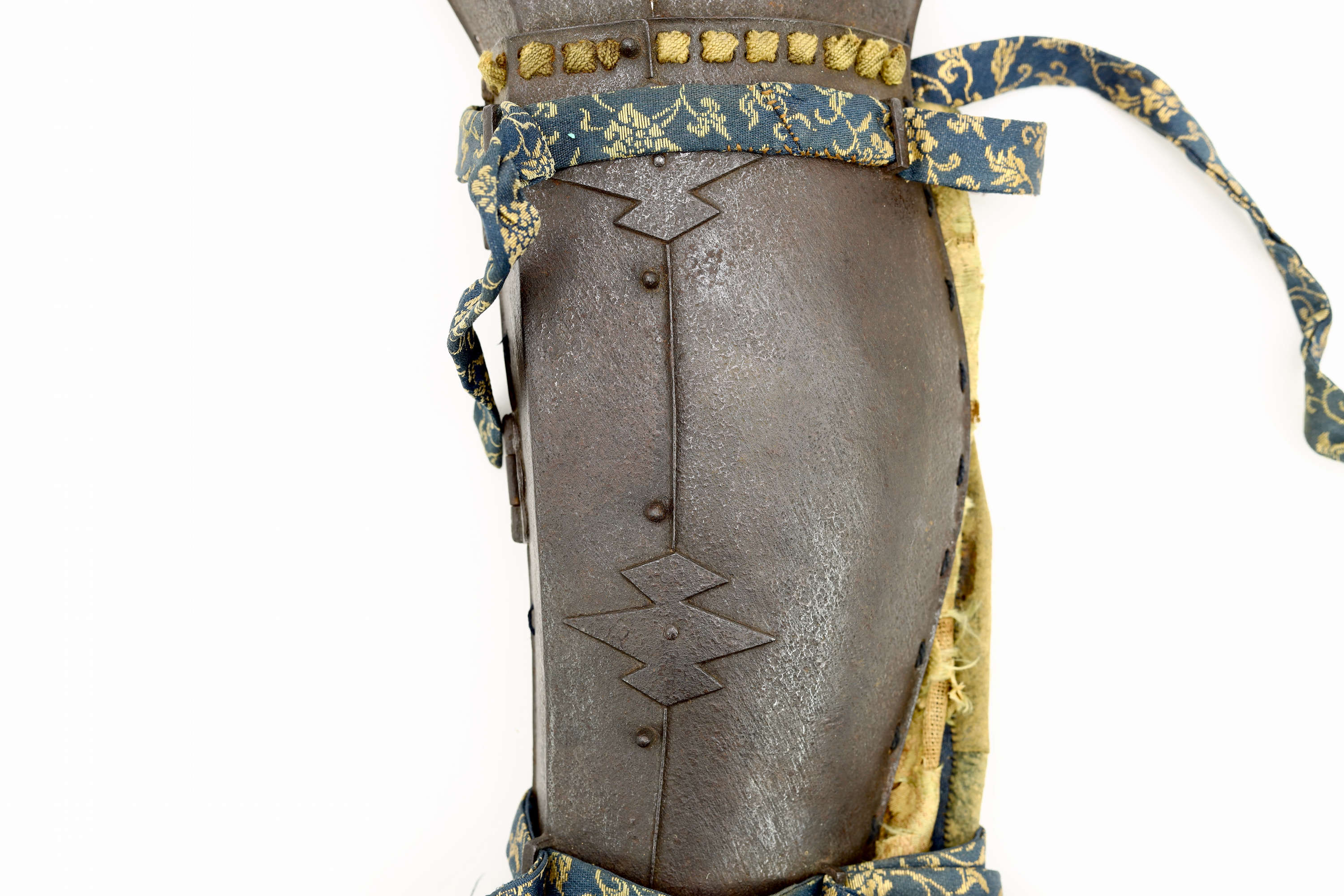 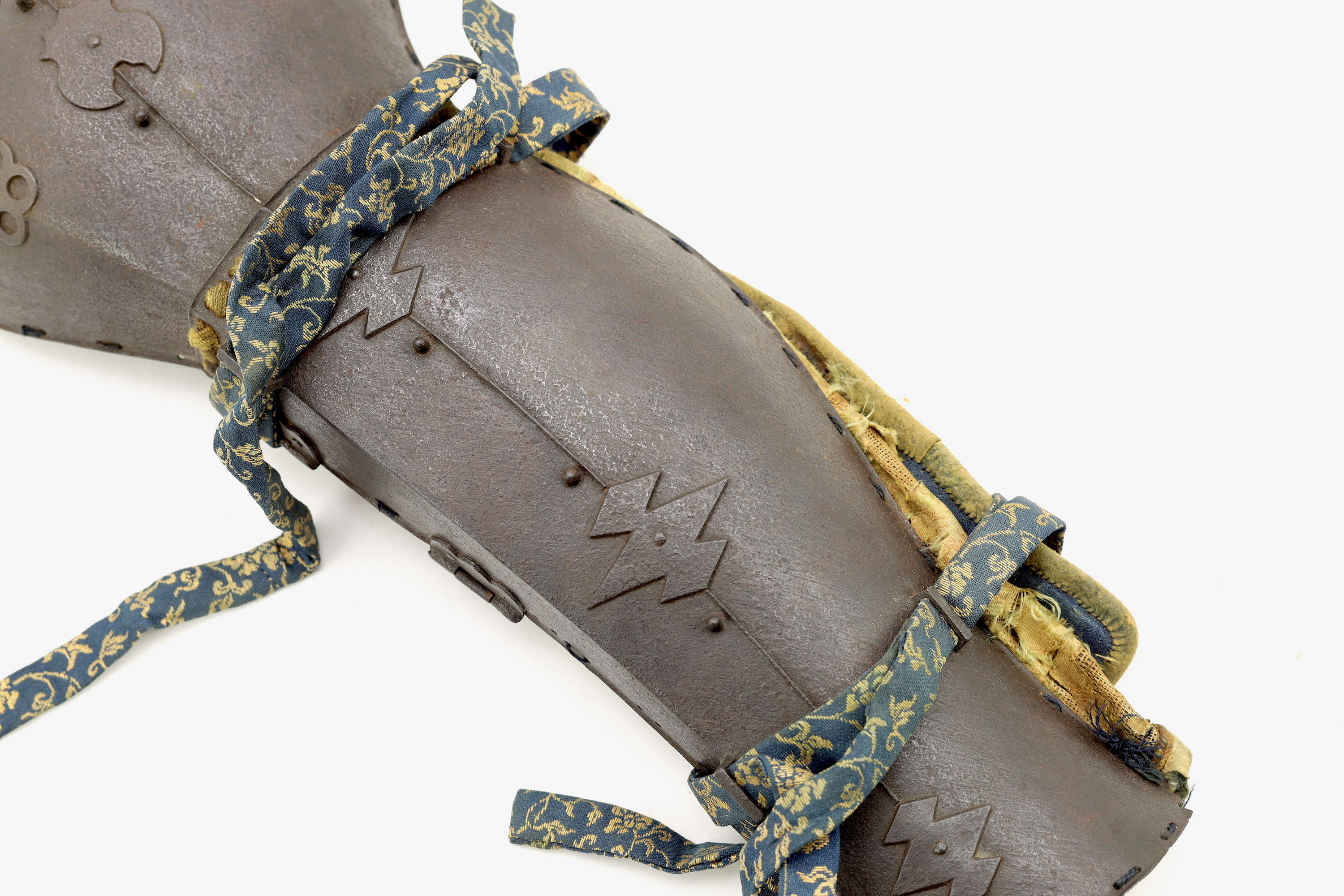 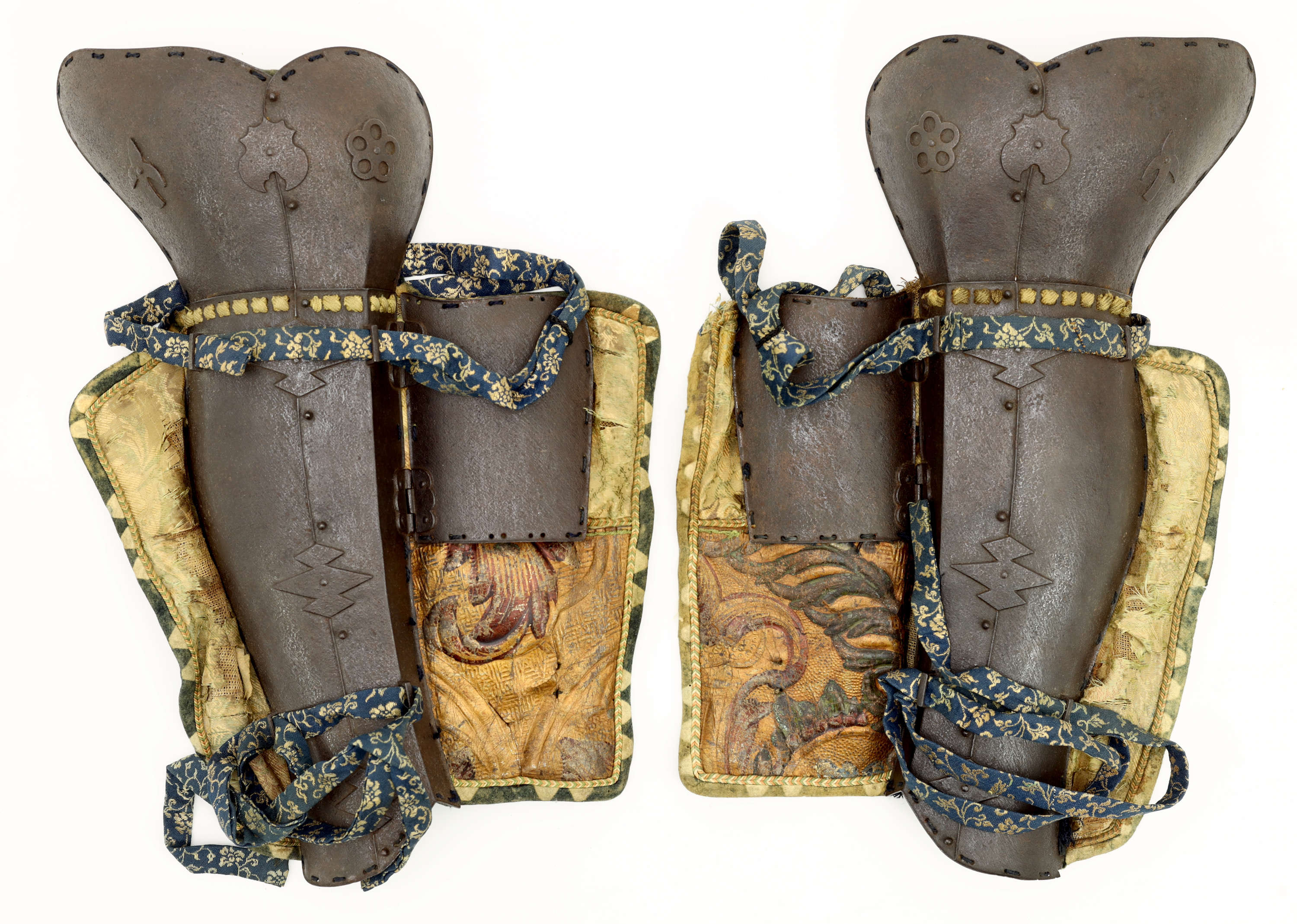 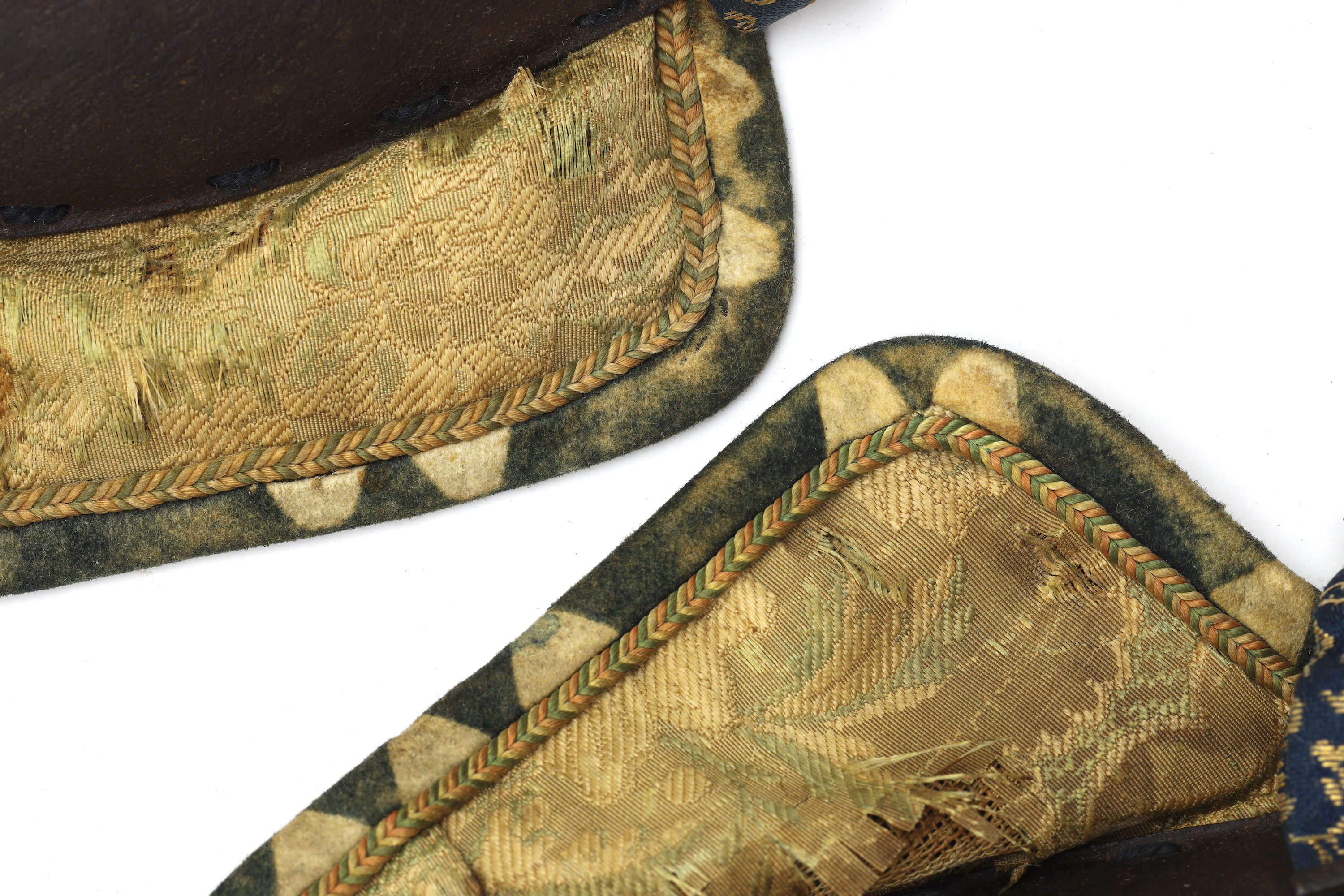 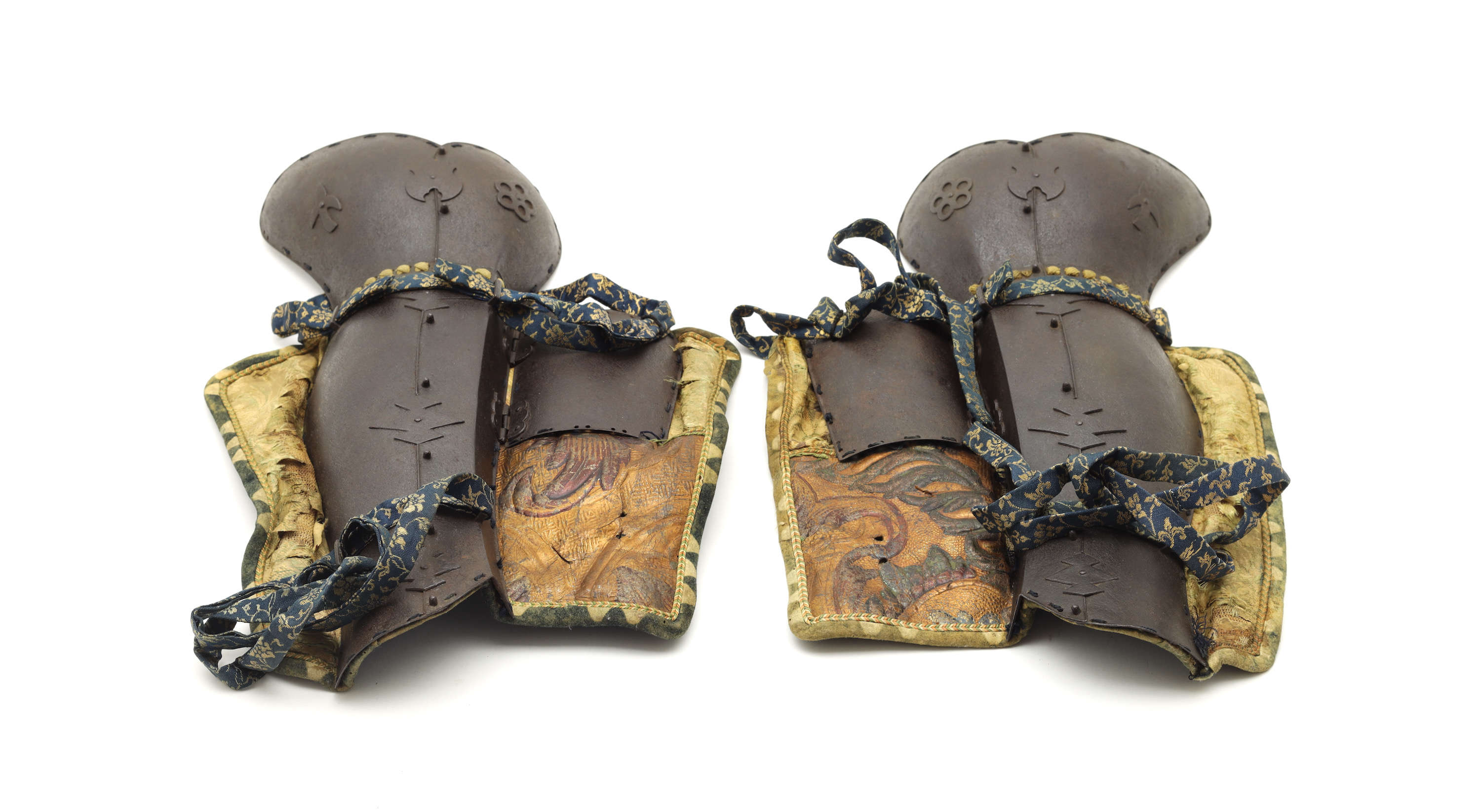 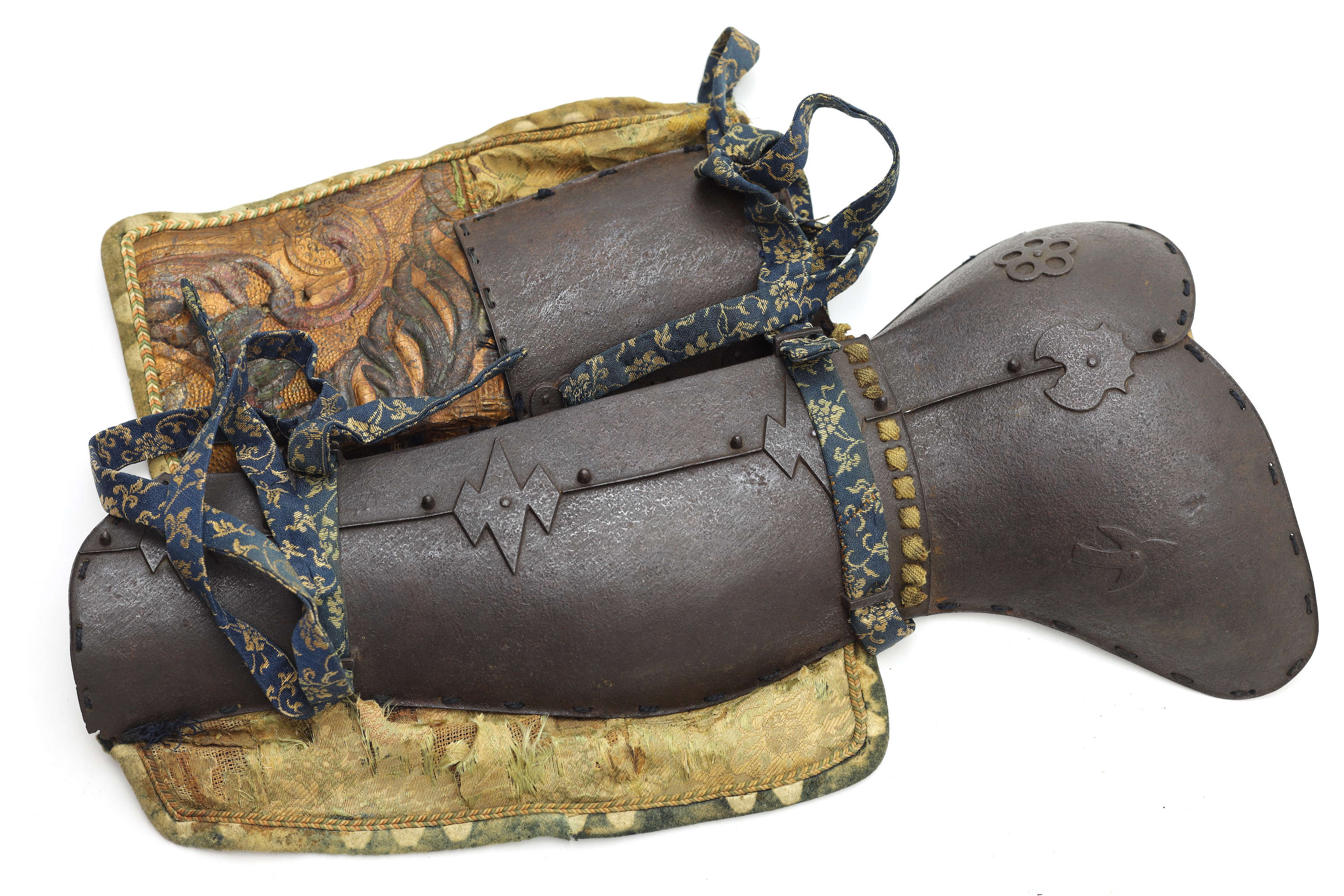