A magnificent Burmese dha-lwe with spectacular overlaid blade. It has a slightly concave panel in the center that is cross-hatched and blackened. It has overlays of typical Burmese vegetal motifs alternated with animals, actual and mythical. What is remarkable about this blade is the quality of the work, and the fact that it is executed in three metals: brass, copper, and silver.

Most of these high quality dha have decor only in silver, and sometimes two metals are encountered. This is the only one I've come across so far that was done in three colors. The long backedge is similarly crosshatched and blackened, with geometric decor in silver wire overlay. A similar pattern is repeated on the base of the spine of the blade. All overlay is done with precision and skill.

The blade is thick, stiff, and with good balance. It's not just a ceremonial showpiece, but capable of good cutting. The handle consists of two iron sections with silver overlay, and in the center a section that is probably made of wood overlaid in silver worked in repoussé. The handle terminates into an artichoke shaped silver pommel.

Overall the piece looks and feels a lot earlier than most that survive in collections, and I would tentatively date it to the late 18th to early 19th century.

The blade has a most unusual decor that has puzzled the Burmese art historians I consulted. Usually, these have silver overlays depicting a story involving figures, often with text to help the observer grasp its meaning. This time, the overlay is purely made of animals and vegetation.

The vegetal motif here is so-called maw-pan or “floral scrolling”.1 Within the maw-pan are several creatures. Each side of the blade shows four birds of various species, two salamanders or lizards, and a taman chah literally "forest tiger". (Also translated as "were-tiger" because much like the werewolf in European folklore, these taman chah are the animal form of a human who can shape-shift between tiger and human form.)

The hilt decor features various human and humanoid figures. It probably portrays a story from traditional Burmese folklore. I did not manage to identify the top figures but those in the middle section are probably so-called belu, demons of Burmese folk religion. At the very bottom are two kinnara, half-human half-bird like creatures. They are considered eternal lovers, inseparable but never to produce offspring. They are believed to come from the Himalayas and watch over humans in times of trouble or danger.2

By the late 19th century, lavish dha with overlaid blades were documented as being made in Mindan village. A father and son who were making these were interviewed and they said the tradition went back about 5 generations, putting the origin of that craft around the middle of the 18th century. It seems that this dha is one of those earlier pieces.3

A wonderful example of a Burmese dha with fine multi-color overlays on the blade, and iron handle sections. It's the only one of its type I've ever seen. Despite the elaborate decor it is well-balanced, with a thick blade of good steel. It was clearly made for someone of very high rank and status who wanted a pretty but real sword. 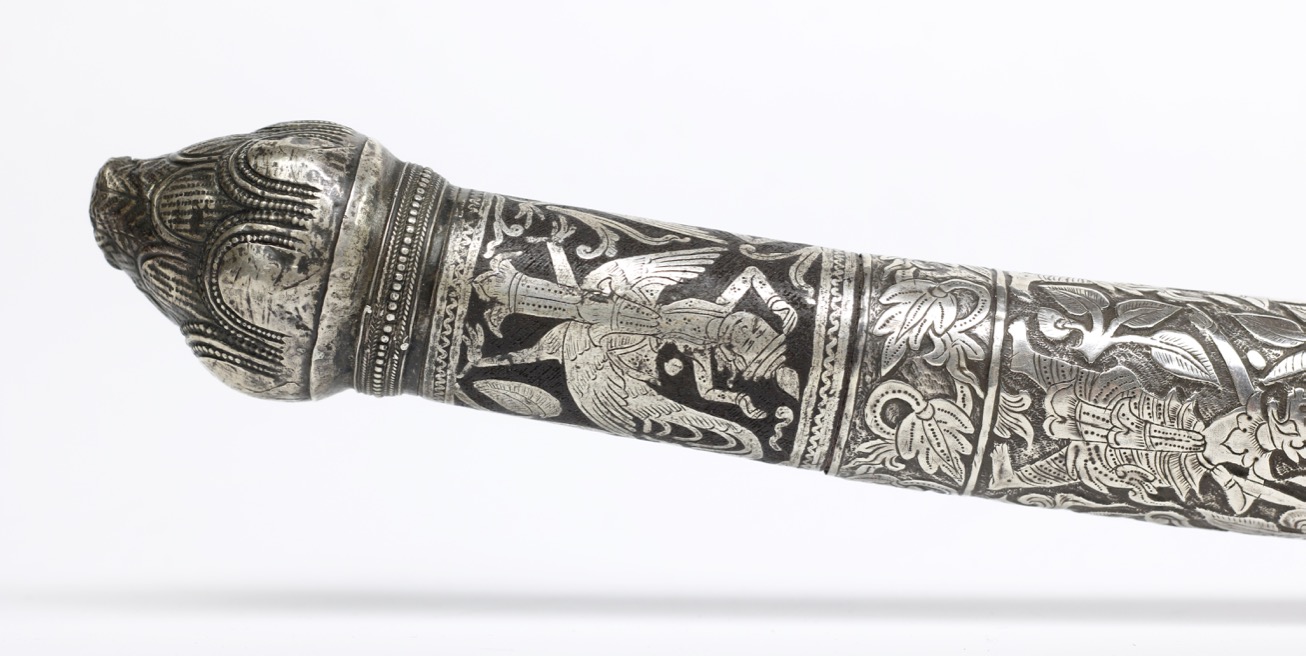 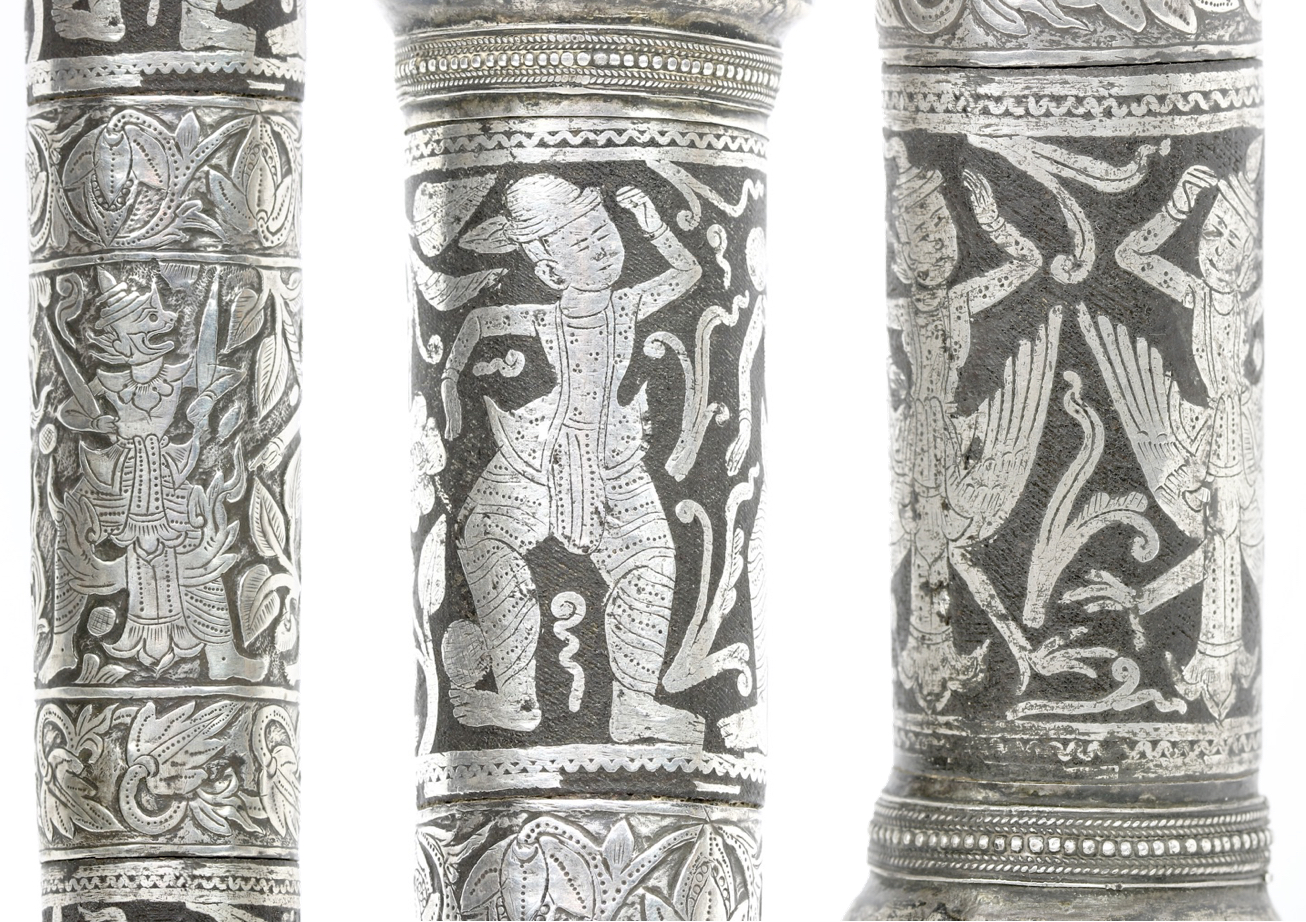 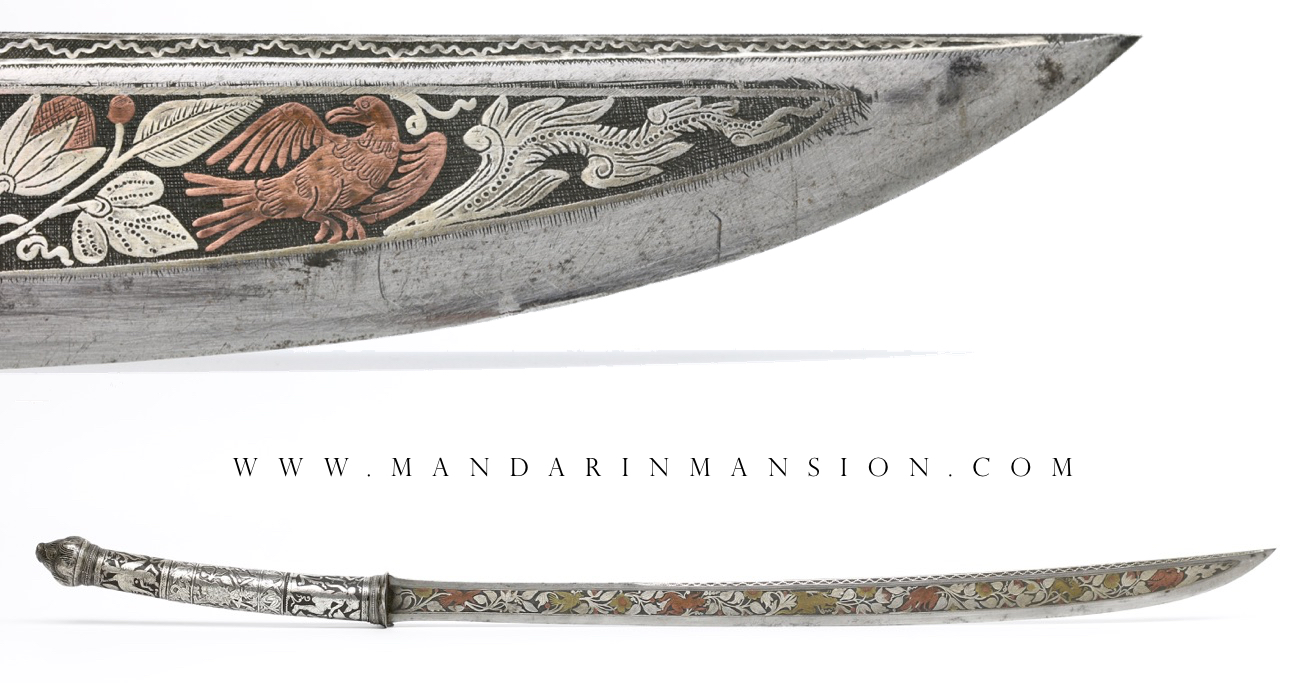