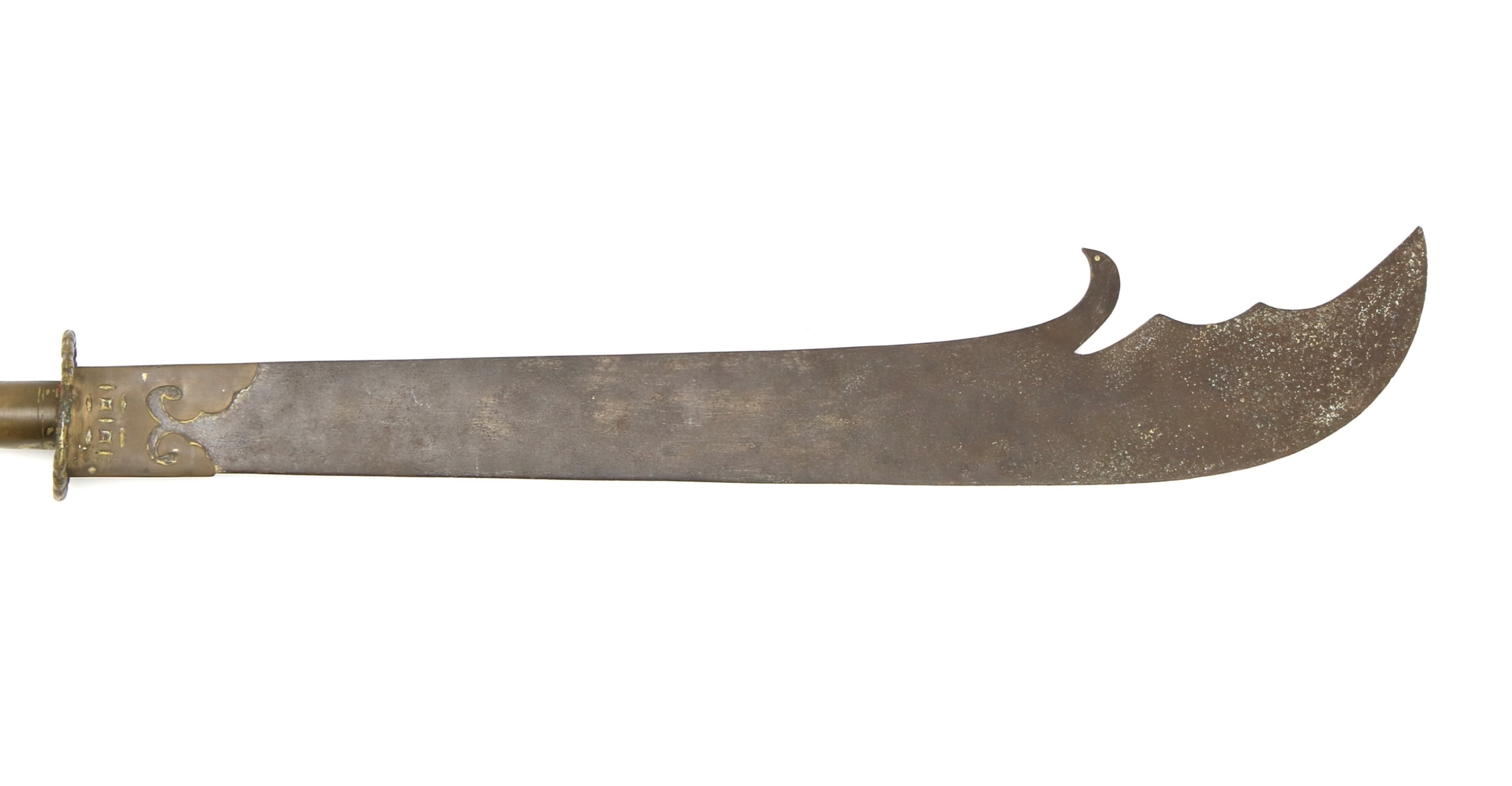 The yǎnyuèdāo (偃月刀) or "reclining moon blade" is an iconic Chinese polearm consisting of a large blade with an accelerated curve near the tip and a spike at the back.

Most people will know it by the name "guandao" because since the Ming dynasty, it became strongly connected with Guan Yu. He was a historical figure from the Three Kingdoms Period (220-280 A.D.) who was later canonized as the God of War in Chinese folk religion. By the Qing, over 200 temples devoted to him were scattered across Beijing, frequented by soldiers.

According to Cheng Zi Yi (程子頤) the weapon was the general's weapon, primarily suitable for use on horseback and unsuited for the foot soldier. It required great strength and a fast horse to use effectively.1

Mao Yuanyi (茅元儀), himself a naval commander, wrote in the Wǔbèizhì (武備志): “When displayed in practice the yǎnyuèdāo is imposing, but it is not practical for actual combat.” 2

By the Qing, the use of the yǎnyuèdāo indeed seems to have been reduced to almost a purely ceremonial role. They were carried by retinues o officials and by soldiers during parades. A particularly heavy example, the wǔkēdāo (武科刀) was used for strength training and strength testing in the Qing military.3

A large and impressive example, with features that attribute it to southern China.

The blade is mostly straight until a sudden curve sweeps the tip back. The tip has a scalloped spine, and a pronounced hook finishes the classic yǎnyuèdāo blade form. It is large, heavy, sharp, and looks and feels like an actual weapon and not just a ceremonial implement. Blade geometry is quite precise, with nice and flat bevels. Much better than the majority of these blades.

At the base of the blade is a brass tūnkǒu (刀吞口) with stylized cloud shaped profile. On the base are cutouts in the form of a pair of coins. The tunkou normally slides onto the base of a blade, but in this case it only wraps around the edge and sides, with the steel back of the blade being exposed. It is very tightly attached though, possibly be means of brazing.

The guard has a stylized coin-shaped base with a bamboo-sectioned rim. One of the four "arms" of the base is now gone, leaving an opening. It is attached to the remainder of a wooden shaft, with two brass ferrules. Some reddish filler can be seen under the top ferrule, both at the guard and at the underside of it, and also at what is now the "pommel". These are probably relatively recent repairs.

There are remains of a golden surface finish that has perhaps coated the entire weapon at some point. This finish is also sometimes seen on (wooden) Qing weapons for stage performances, and perhaps the piece fulfilled such a function later in life.

A number of factors point to a southern Chinese origin, probably in or around Guangdong. These are:
1. The coin-shaped, bamboo section rimmed guard. Such guards are also seen on southern military sabers.
2. The shape and decoration of the tūnkǒu. Leather patches of exactly the same form are often seen on Húdiédāo (蝴蝶刀) scabbards.
3. The relatively straight shape of the blade, with an edge that runs completely straight for a considerably portion of the blade. 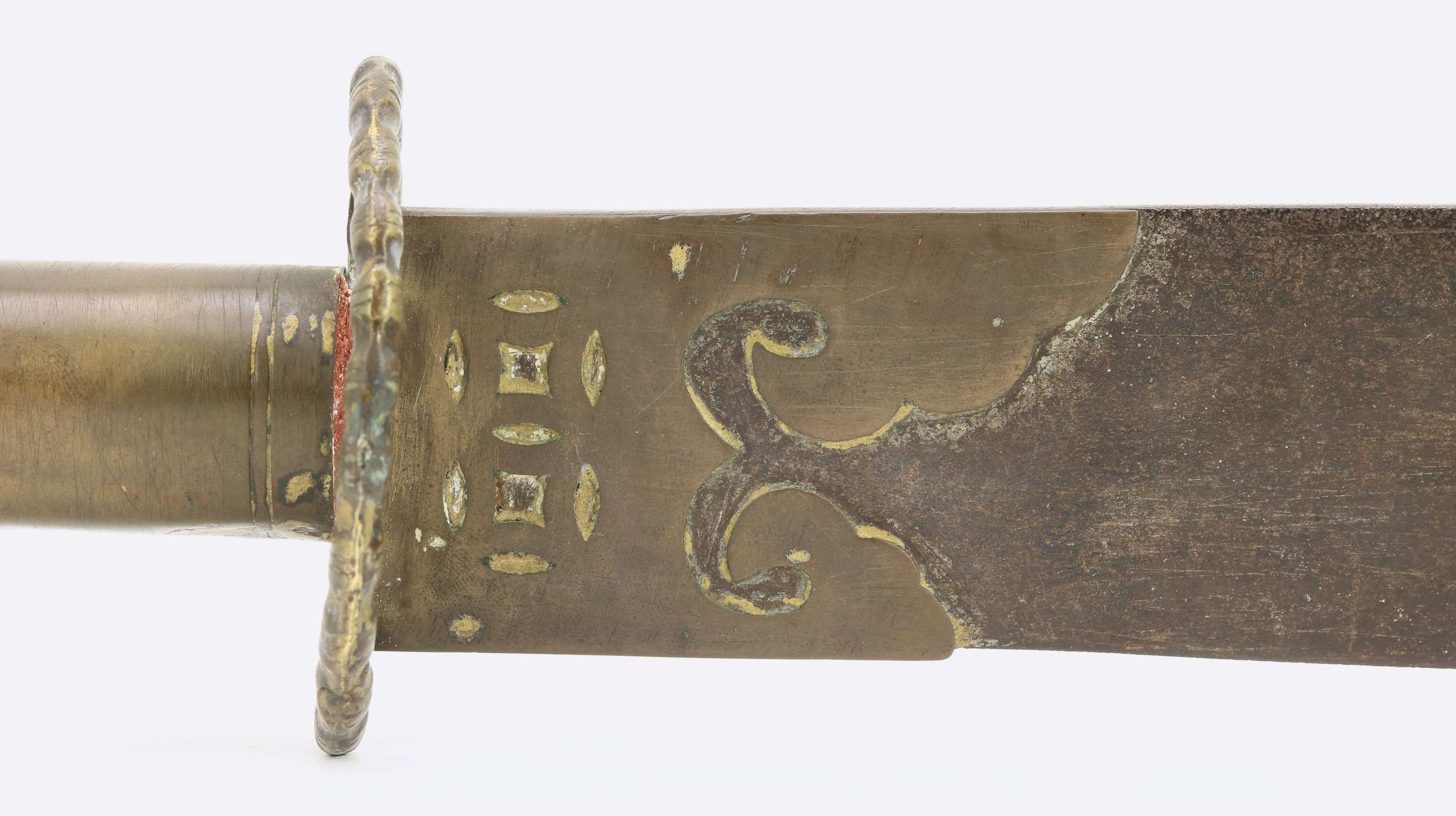 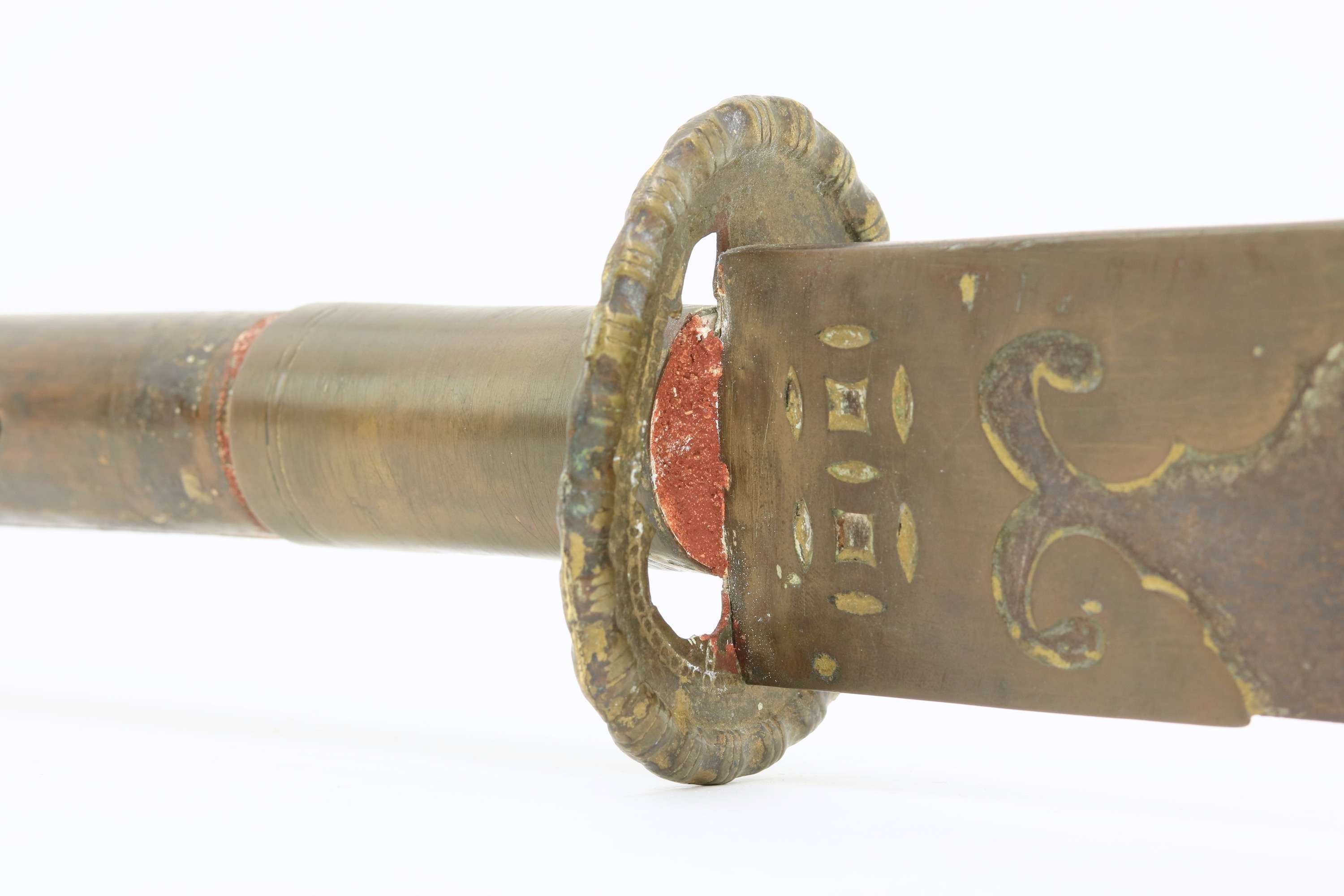