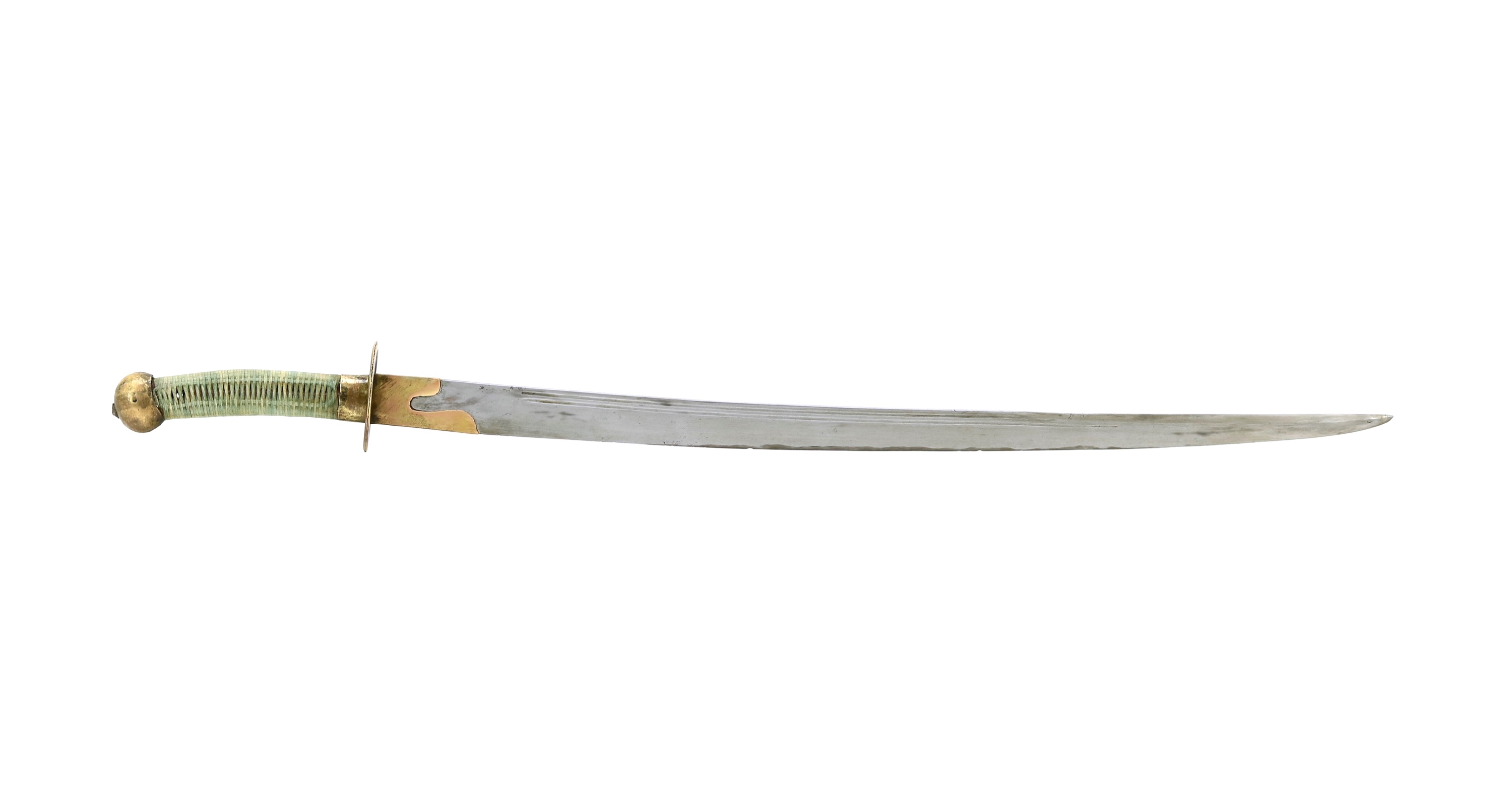 Base 7 mm (just ahead of collar)

A southern Chinese military saber. The blade has the very slender form that is typical for these, something that appears to be a remnant of older Ming blade styles that endured longer in the south than anywhere else in China.

The blade is narrow in profile but rather thick on the spine, giving it very pleasant handling characteristics with more weight behind the cut than what one would expect from solely looking at the profile.

It has two narrow grooves and a very long back bevel that is semi-sharp near the tip to aid in thrusting. The blade is forge folded with an inserted high-carbon steel edge plate. This plate is exposed along the entire edge, and can be seen on some portions of the spine as well, showing it goes all the way through most of the blade. This steel core gives this narrow blade plenty of rigidity.

Inserted steel edge plate seen at the spine of the blade.

The long backedge removes weight at tip for better handling, and creates a double-edged point for the thrust.

At the base is a copper alloy collar piece or tūnkǒu, of a somewhat rounded form so typical for southern Chinese sabers.

The guard is a thin brass disc with thickened rim, executed plainly with no adornments. Ferrule and pommel follow en-suite, with the flattened tangerine shaped pommel that was common on Qing military swords of the second half of the 19th century. Original peening remains intact.

Blade in recent polish by Philip Tom, revealing its layered and laminated structure. Some chips in the blade were too deep to remove and had to stay. Guard and ferrule were fixated with some modern glue. I did a grip wrap in fine cotton cord over the original handle.

The piece had lost its scabbard, but luckiy Philip Tom still had an old scabbard lying around that was made for exactly this type of sword. The scabbard is antique and of the period, but instead of plain mounts there are engravings on the mounts with bats and longevity symbols. Scabbard is old but structurally sound. A crack is seen in the photos at the bottom half, now repaired by glueing.

A typical Chinese soldier's saber from southern China, probably from Guangzhou, formerly known as Canton. A few sabers with very similar blades have turned up with markings attributing them to Bannermen of the Hanjun. Those without markings were perhaps issued to the Green Standard Army.