A very crisp example of a south Indian katar of the 17th century with a curved blade.

The slender blade has a nicely defined center rib as seen on for example Ottoman daggers, while thickens near the tip in typical Indian fashion. It is made of beautiful wootz steel that is very even and which stands out in high relief. It is riveted to the hilt by means of three rivets through the langets.

The hilt is made of forged and chiseled iron and has great sculptural qualities. Instead of being made of fairly flat sheets of steel like most katar hilts, this hilt is entirely made of shapes with three-dimensional qualities. The sidebars have thick, ridged middle sections and a series of ornamental grooves that separate bulging surfaces. The handlebars are executed in 17th-century fashion with ball-shaped grips.

It comes with a scabbard with a body made of lead sheet covered with dark blue silk velvet. It has two elegant brass mountings with nice pierced ornamentation. The scabbard is very slender and is a perfect fit to blade and hilt. This is the first time I have encountered a lead scabbard on a piece like this. The tight fit of all parts suggests it was probably made this way, the tolerances inside the fittings are too small to allow a wooden body.

Curved katar are rather rare. The Metropolitan Museum has a number of interesting examples that show some similarities to the piece presented here:

A beautiful piece with lavishly decorated hilt and a blade with a very similar profile to this piece, also ribbed in the center. The blade has an inscription at the base reading:

"Help from Allah and a speedy victory. So give the glad tidings to the believers"

The style of the piece plus the inscription suggests it was probably made in one of the Deccan Sultanates, possibly Bijapur or Golconda, that were both dissolved in the late 17th century following the rise of the Mahrattas.

Another typical South Indian piece of the 17th century with a curved blade, notice again the curved blade with central rib.

Provenance: Louis A. Lanthier, New York. Sold to George Cameron Stone in 1910. bequeathed to the museum in 1935.

With this piece the curved blade is of a very different style, very much like the blade of a khanjar type dagger. Here, it's the hilt that shows great resemblance to the piece described in this article. In particular, the handlebars are near identical.

Provenance: W.O. Oldman, then George Cameron Stone, bequeathed to the museum in 1935.

And finally, a rather unusual piece but with a very similar blade and scabbard. Notice especially the form of the scabbard mounts, with the pierced work.

This piece is attributed in the museum records as being from Lucknow, while most stylistic elements seem to point towards south India instead. It could have been made "inspired by" southern pieces. It would be interesting to learn why this piece was attributed to Lucknow, and to assess whether this is indeed correct.

A nice example of a rather rare type of south Indian katar. Crafted with substance, there is no golden decoration but rather a confident reliance on the refined geometry of the hilt and material of the blade. It comes with a beautiful scabbard to match. 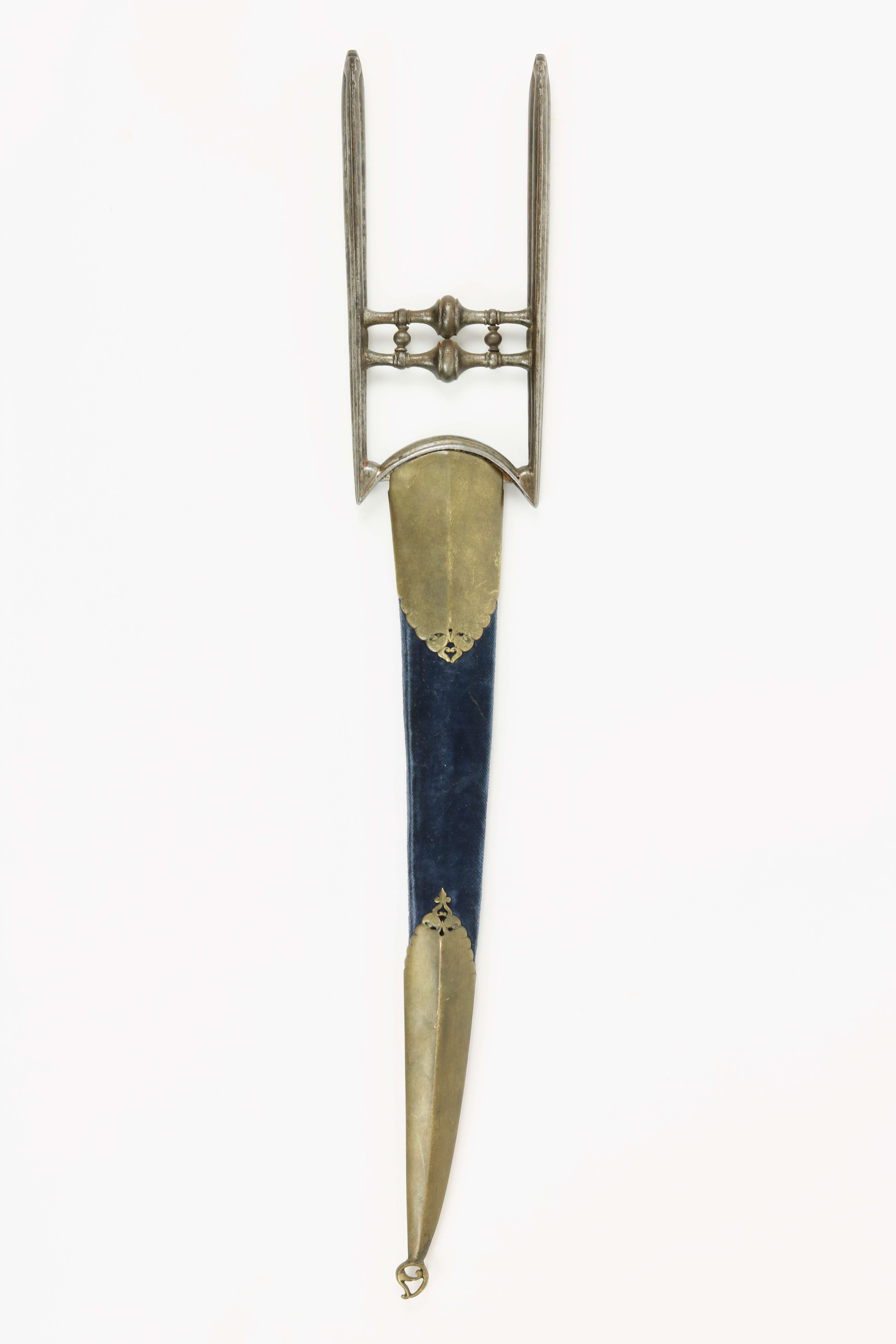 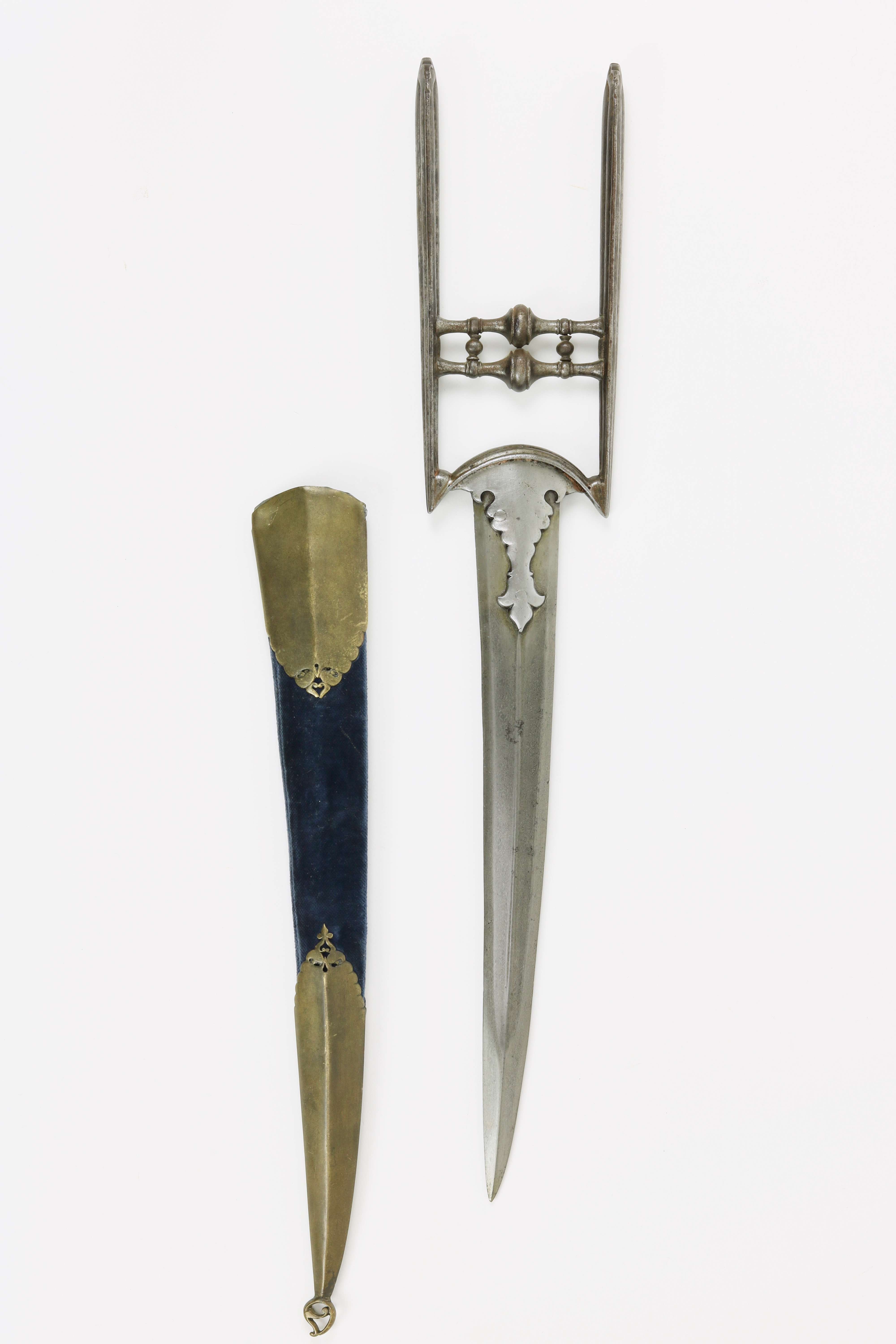