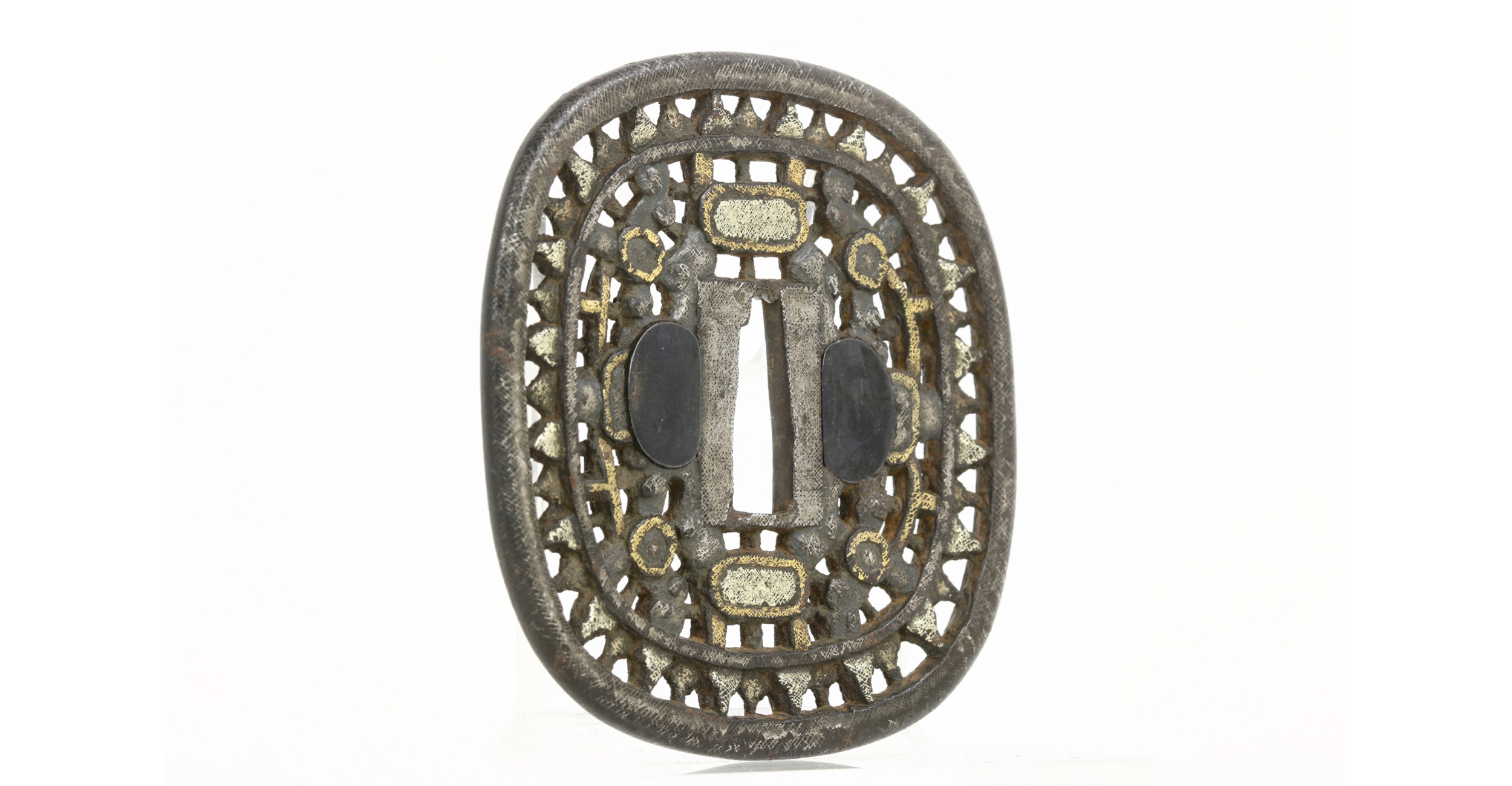 Among the broad genre of Asian Export sword guards there is a small group of distinctive pierced iron guards with stylized lotus petal border.

Stylistically, they have a strong relationship with high-end openwork sword guards that were popular among the early Manchu elite. Let me first illustrate some of those: 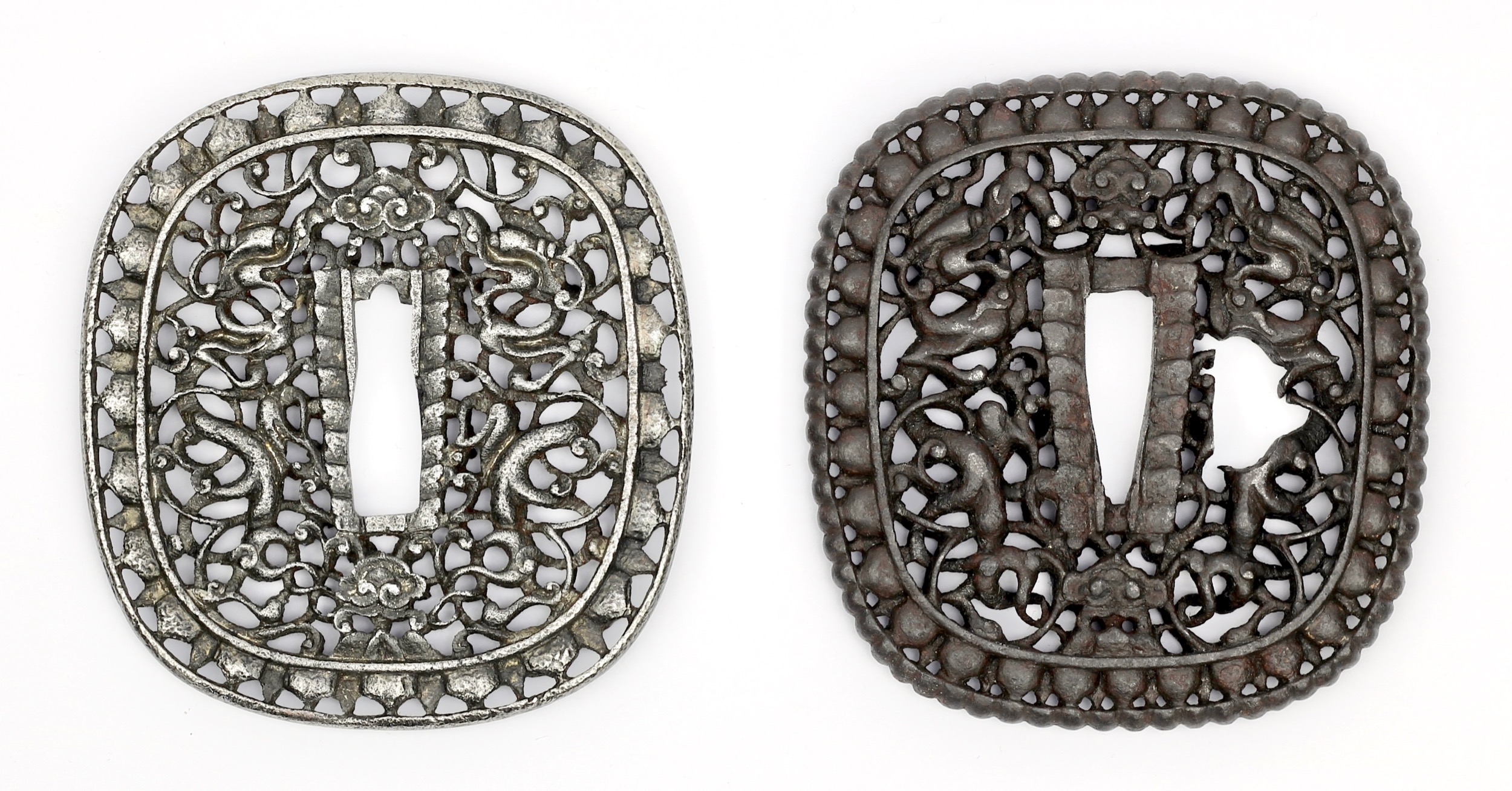 Two 17th century Chinese openwork sword guards.
Both were exported to Japan and converted for use on Japanese swords there.
Sold by Mandarin Mansion in 2018.

The group under discussion clearly takes inspiration from the above but despite their general resemblance, they do not match up to the quality of the above pieces:

For a while, they puzzled me. Let's go through the three above, from left to right.

1. The first retains the lotus petal border and the dragons and stylized clouds of the originals, but became more circular, after Japanese and Vietnamese sword guards. The hitsu-ana (openings for Japanese kogai and kozuka) were later additions, cut through the dragon designs. Notice that the area around the tang opening is angular, matching the angular hilt mounts common on Chinese swords of the 17th and 18th centuries. (See my article on fangshi and yuangshi saber mounts.)

2. The second example retains the overall shape of the originals, but its designs have become very much simplified. This piece once received hitsu-ana, but they were later plugged with shakudo, a copper/gold alloy used in Vietnam and Japan.

3. The third example is a further simplification of #2. While it retains the overall form of the originals, more and more detail is lost here. The piece seems cast, and within the cast are two sunken areas for hitsu-ana, now pierced through. This means that it was probably once mass produced in order to cater a market of people who wanted hitsu-ana, and those that didn't.

The work on these is fairly crude, but with clear references to the better work made in China. A wink, so to say, to top of the line Chinese guards.

Who would have need for these large, relatively crude but practical sword guards in a Chinese style.. Some made with sunken areas as to easily add hitsu-ana in the Japanese style?

In the 17th century, Chinese settlers had moved into every port city imaginable where they became the main agents of trade and skilled craft.1 The main buyers of goods at that time were the Chinese, the Dutch, the Portuguese, and the Japanese.

A large and often overlooked presence in the area were the massive pirate fleets, like those of the House of Koxinga:

"The particulars of Cheng Chih-lung's rise to power in the 1620's are not at all clear and probably never will be. The world in which he gained power was outside the purview of official record keepers and was not much interested in publicizing itself. Among its most important centers of power were the Chinese communities in Manila, Hirado and Nagasaki. Maritime trade, legal or illegal, was its lifeblood. Trade required arms, to fend off the Ming coast guards when trade was illegal, to guard against pirates, and to exclude unwanted competitors."2

His son Zheng Chenggong (1624 - 1662) a.k.a. Coxinga was born in Hirado, Hizen, from a Chinese father and a Japanese mother. He rose to power in the 1640s and gradually took over the family assets. His crew was a truly international mix of Chinese soldiers and sailors, Japanese ronin (masterless samurai), and other sailors, traders and soldiers from across maritime Asia.

This was not a small operation. At his height, Coxinga was able to field armies up to 100.000 men. In 1659 he lead an armada to besiege Nanjing, in 1662 he expelled the Dutch from Formosa (Taiwan) in an attempt to build a base from which he could attack the Qing.

If we consider the mixed pirate crews of these massive fleets, it starts to make sense why there was a demand for such guards, some clearly made so that they could fit both Chinese and Japanese swords. They were probably produced by Chinese makers that were active in the port cities across maritime Asia.

A classic example of this genre of sword guards, with a double rim with stylized lotus petals. Inside this rim is relatively simple pierced work. The round and oval forms seem to mimic the pieces that hold the semi-precious stones on sabers intended for princes and imperial guardsmen. The guard was once covered mostly in silver and gold overlay, much of it now worn through use.

During its life of service, hitsu-ana were cut, but at some point, an owner decided to plug them with shakudo.

A good example of a rather large, practical guard that is a stylistic derivative of high-end Chinese sword guards. I believe such guards were most likely used by the multi-cultural crews of pirate fleets that roamed the South China seas.