The kasthāné is the national sword of Sri Lanka. It seems to have emerged in the 16th century following the first contact with Europeans. The general design shows influences from various cultures but their execution is wholly Sinhalese, exhibiting classic Sinhalese motifs and lion head pommels after the royal emblem.

Silver-mounted kasthāné like this example were made in the royal workshops of the King, who bestowed them upon noblemen and local chieftains as symbols of rank and office, or as gifts to diplomats. Gold was reserved for the king himself and silver for his highest officials, Adigar, who were basically feudal lords that also acted as ministers and governors.

"When he first promotes them [the Adigar] (…) he (...) gives them a sword, the hilt all carved and inlaid with silver and brass very handsomely, the scabbard also covered with silver - a knife, and halberd; and lastly, a town or towns for their maintenance. "1

All the men in office wear swords of a moderate size, antiquated and not formidable in appearance. The hilt and scabbard are made of silver. The former imitates the head of a tiger, the latter is embossed and turned round at the point.2

A beautiful silver-mounted kasthāné with a narrow, curved blade with a single groove on each side. The blade bears the V.O.C. Amsterdam cipher on either side, with the year 1776. Many such marked blades are found all over the former colonies, including Sumatra and Java. It is unclear how they were obtained, as the V.O.C. was not officially selling the blades in these areas. Unlike many highly ornamental kasthāné that are purely ceremonial, this blade is a decent piece capable of actual use.

The silver hilt is typical Sinhalese. Cast out of two halves and worked to finer detail with chiseling in traditional Sinhalese motifs, with remains of parcel gilding. It has the large simha (lion) head pommel with ruby pupils set in gilt copper eyes. The grip is articulated with cutouts for the fingers, leading up to an octagonal gilt copper ferrule.

The crossbar terminates in a sérapéṅdiya on one side, the other side has a makara head from which the knucklebow emerges, which in turn ends in another sérapéṅdiya head. On the front of the knucklebow is a figure of Lakshmi, goddess of abundance and fortune. She is sat in the lotus position, holding two sprays of vegetation. Above the guard section emergy two makara heads, they neck leading their heads back towards the base of the blade.

The wooden scabbard is clad in silver, worked in repousse with traditional Sinhalese liya-vela, a decorative repetitive vegetal motif that sprouts from the head of a sérapéṅdiya near the tip. The scabbard endpiece is a highly stylized bird's head, with liya-pata, Sinhalese traditional curly elements.

The scabbard has a band in the middle beset with 13 pink rubies. Near the mouthpiece is engraved ".A:M.", repeated in the knucklebow. Possibly the initials of a previous owner. By the late 18th century, the western script was adopted in Sri Lanka as well, and male names often started with an A so it could have well been the initials of a local. The scabbard has four loops by which it was attached to a sash worn diagonally over the body.

Very good condition with only minor losses to the silver sheet of scabbard and blade collar. The knucklebow's sérapéṅdiya misses the small silver "drop" that normally emerges from its head, otherwise, the piece seems complete. Some denting in the silver covering the scabbard. Blade in very good condition, only minor pitting. Original patina throughout.

A very nice example of a classic Sinhalese kasthāné of the silver type that was presented by the king of Kandy to Adigar at their appointment. It has the rare and desirable additions of a band of rubies on the scabbard and a dated, V.O.C. marked blade that put it firmly in the 18th century. In addition, there are initials that may help a future owner in further investigating the sword's context. 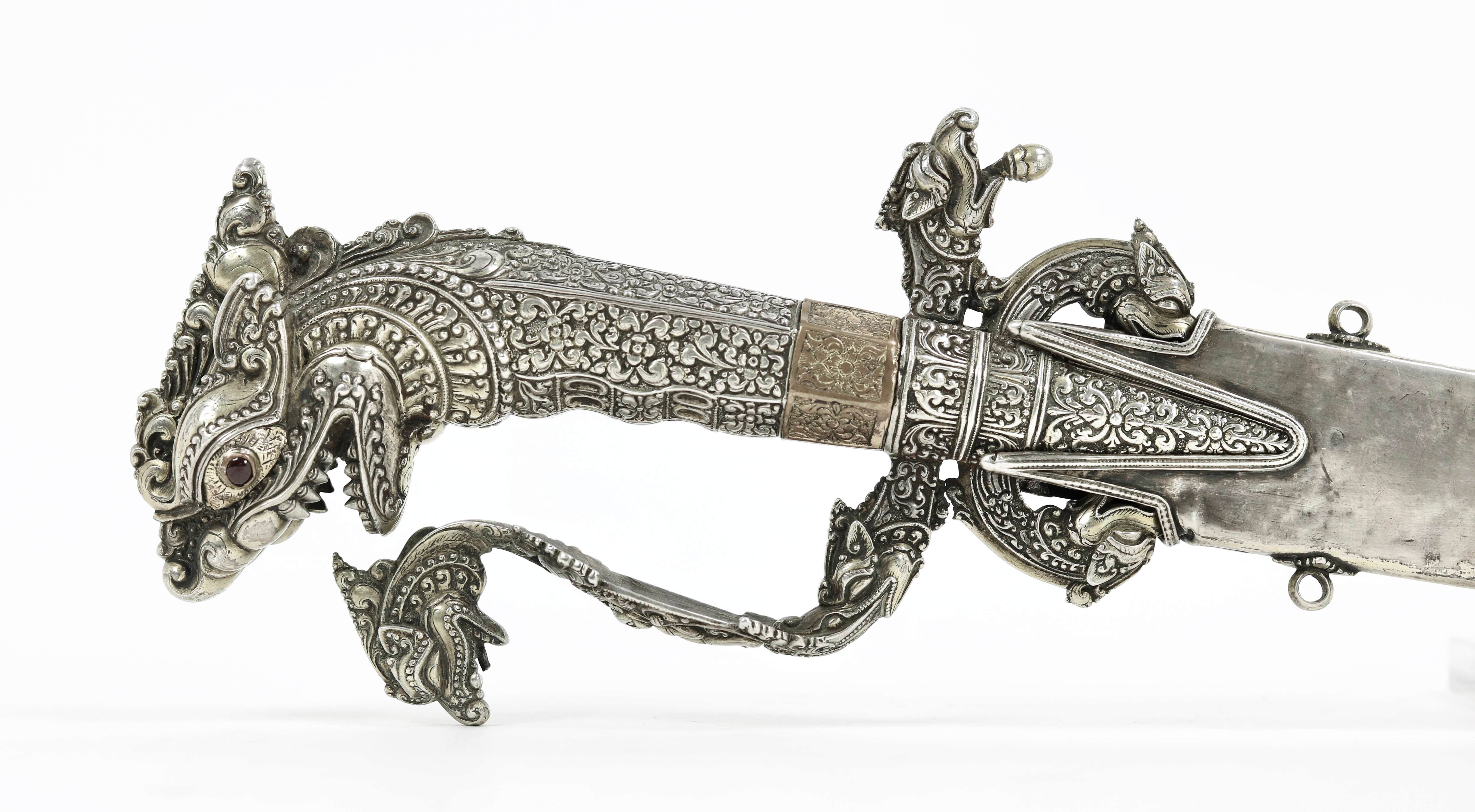 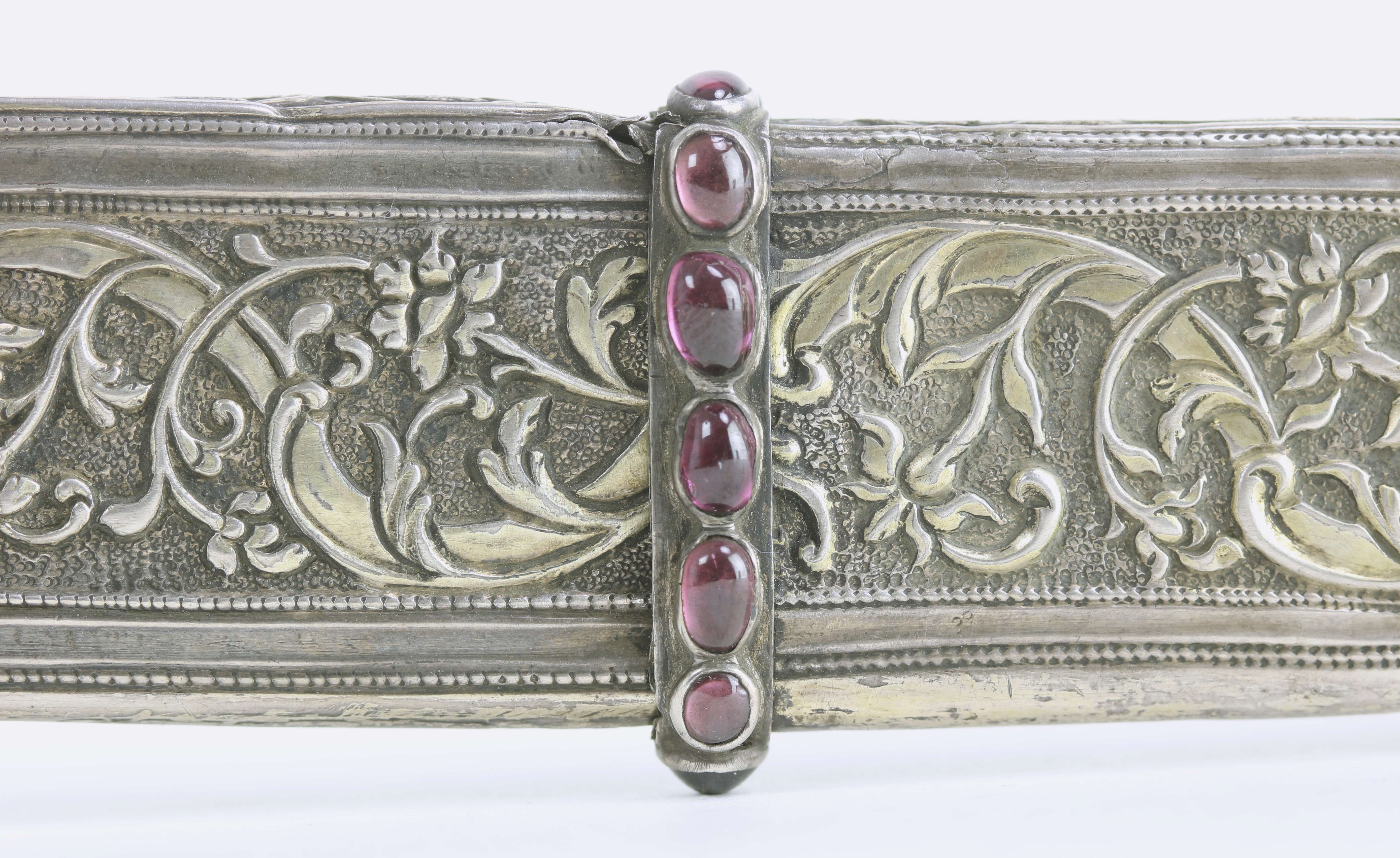 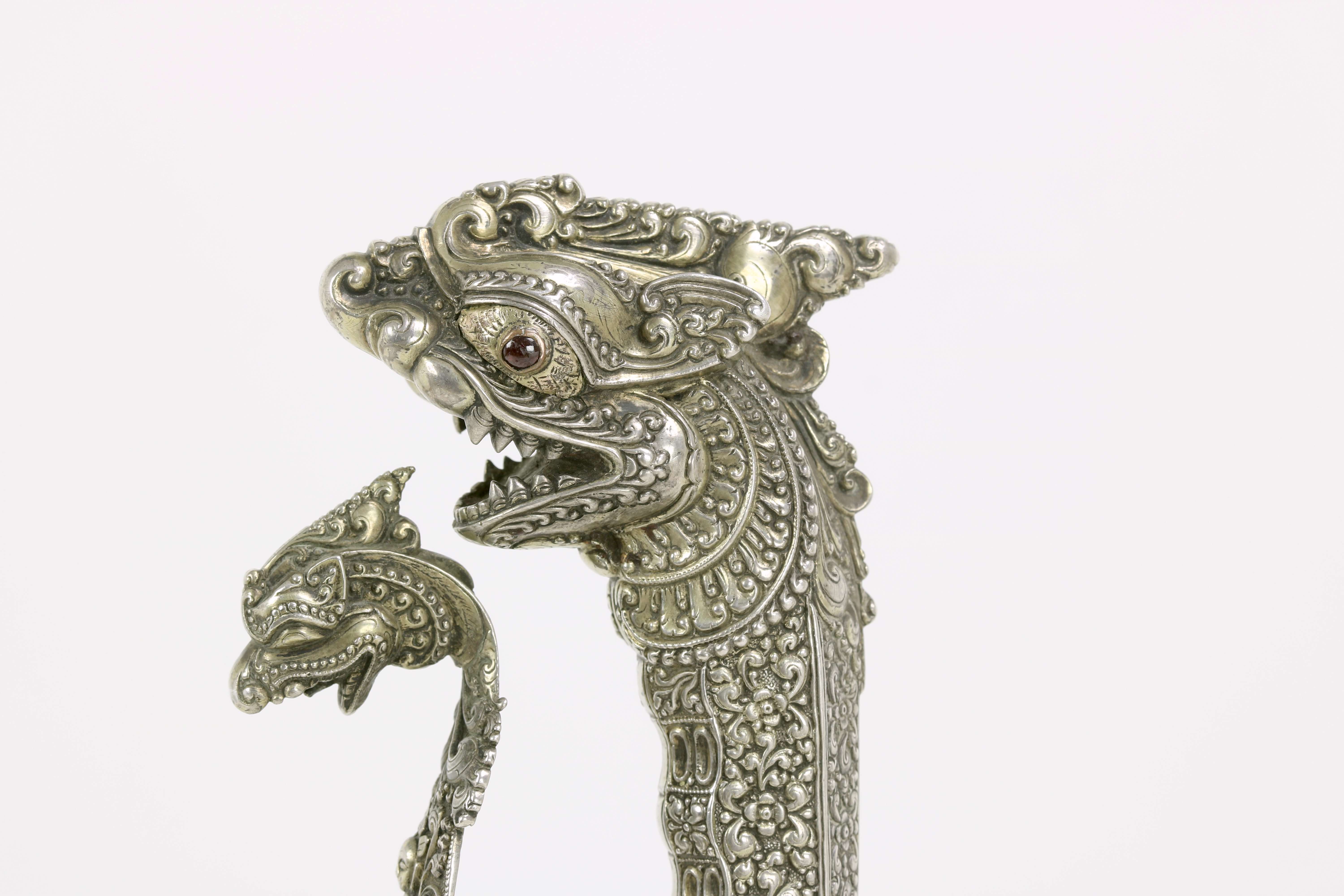 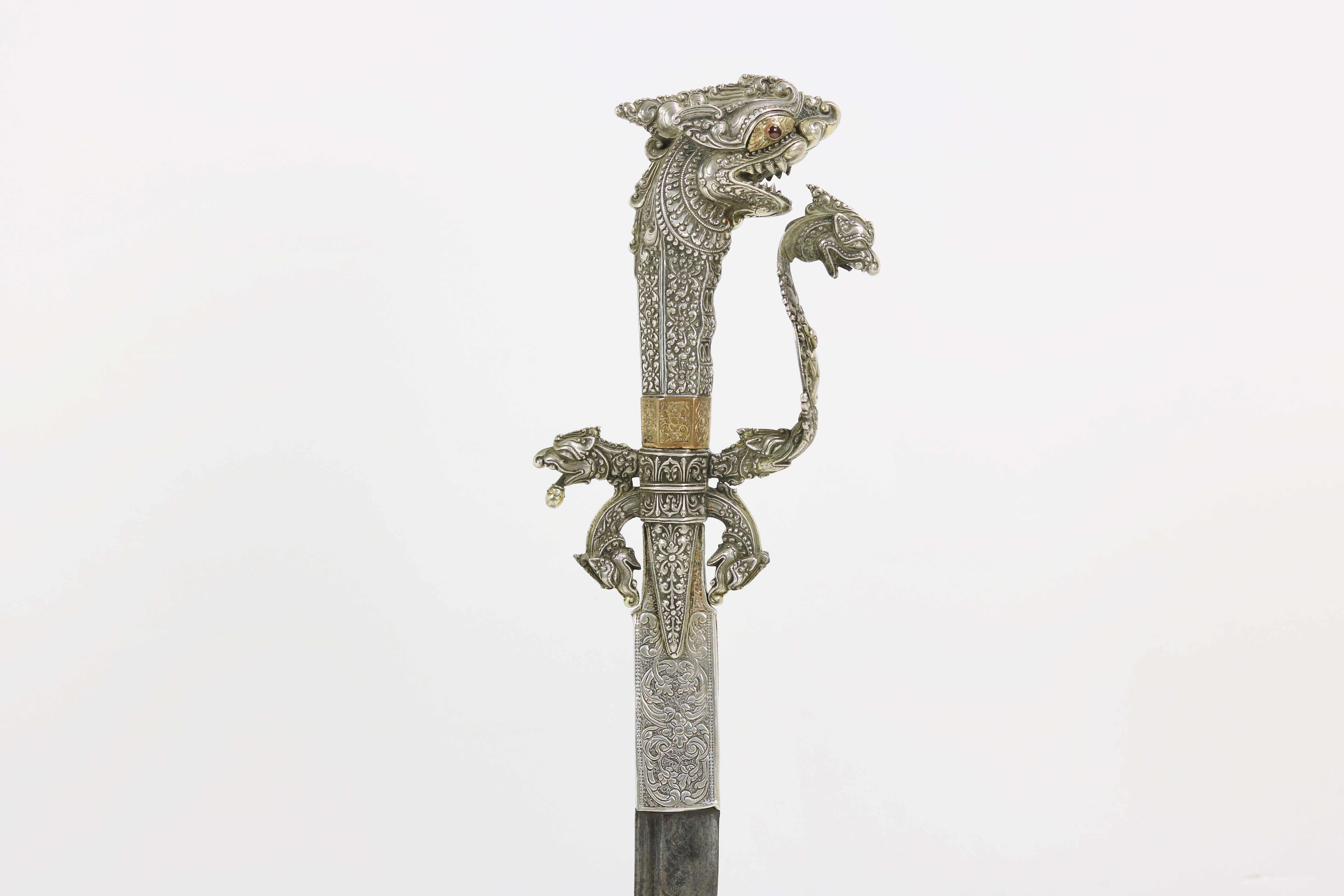 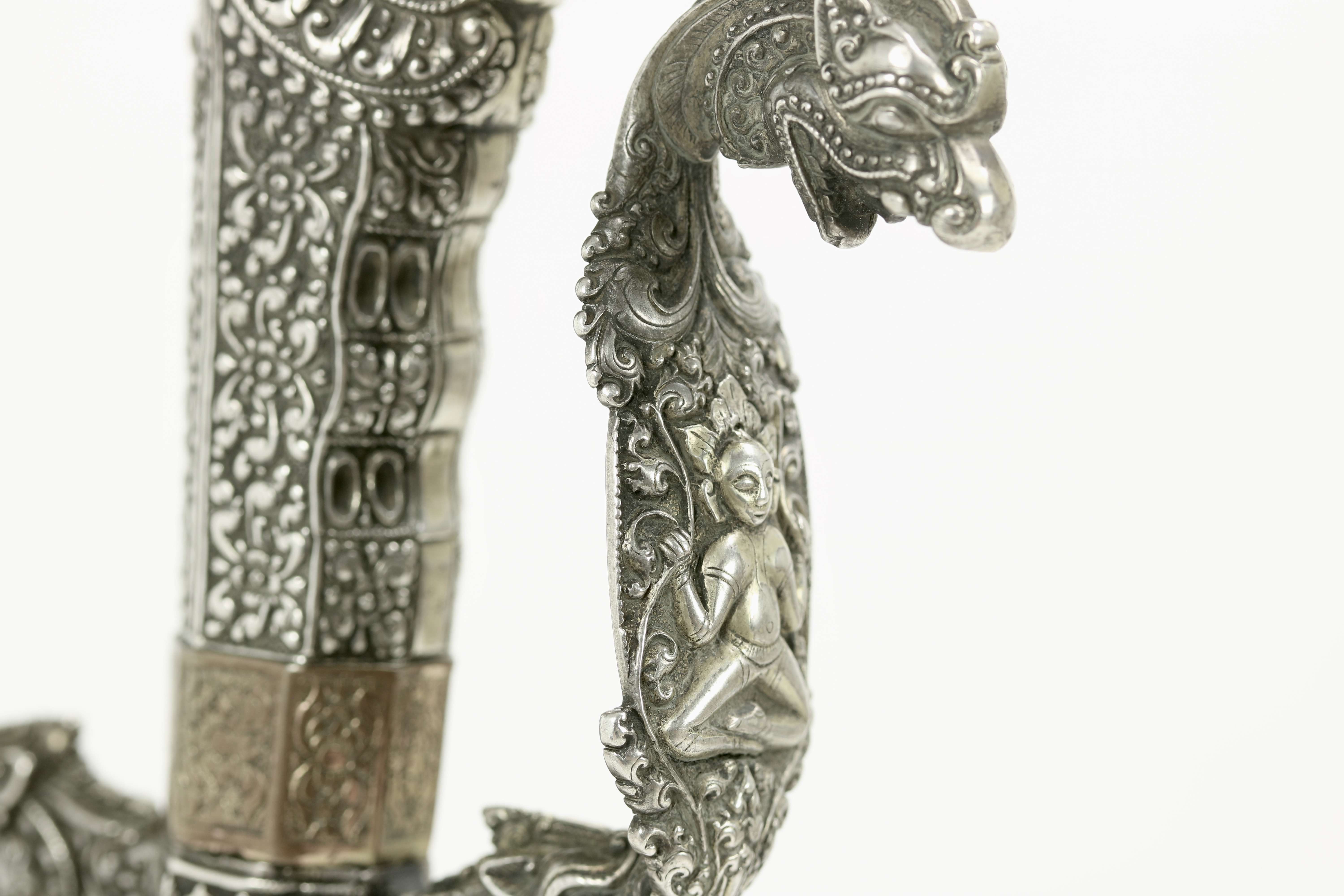 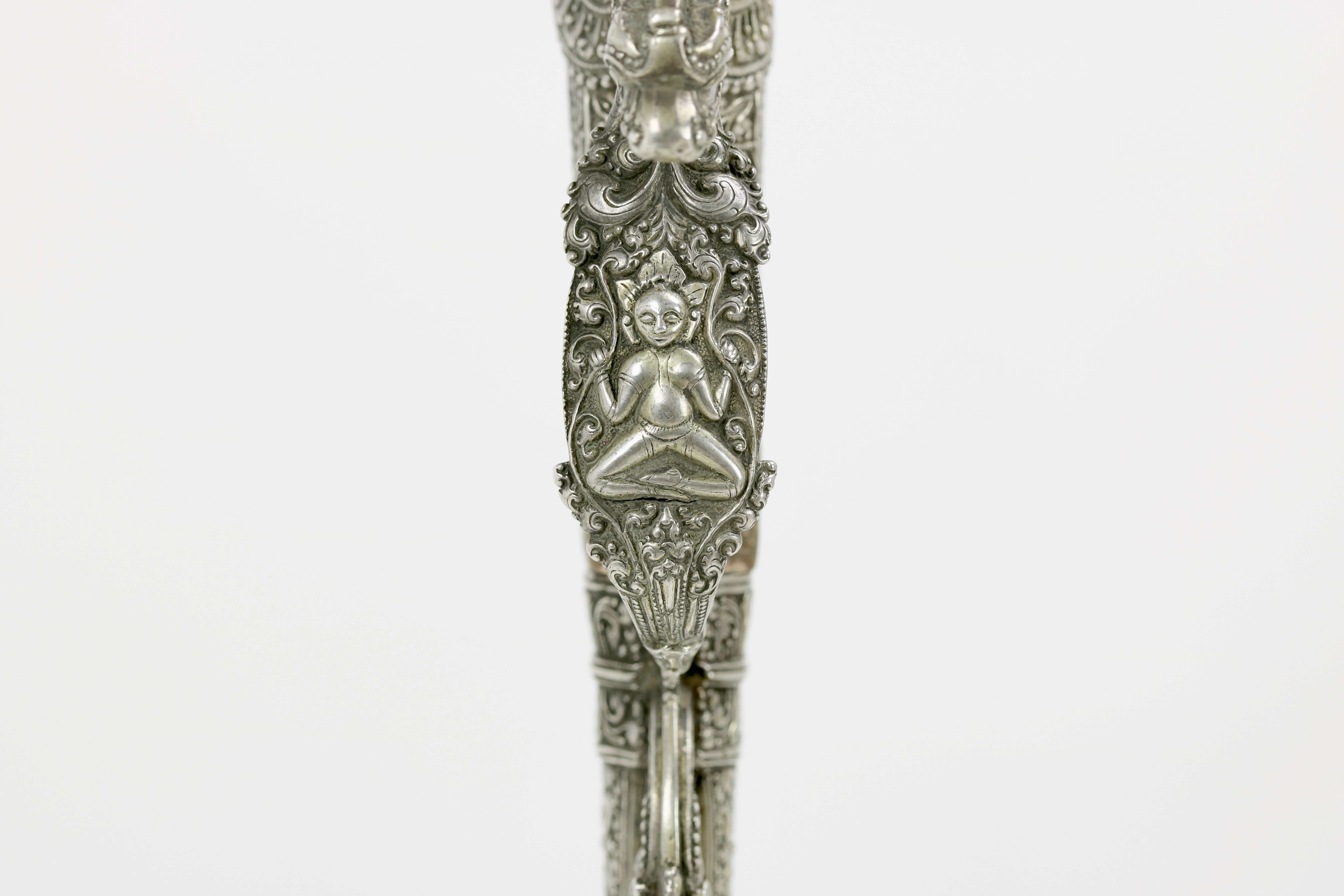 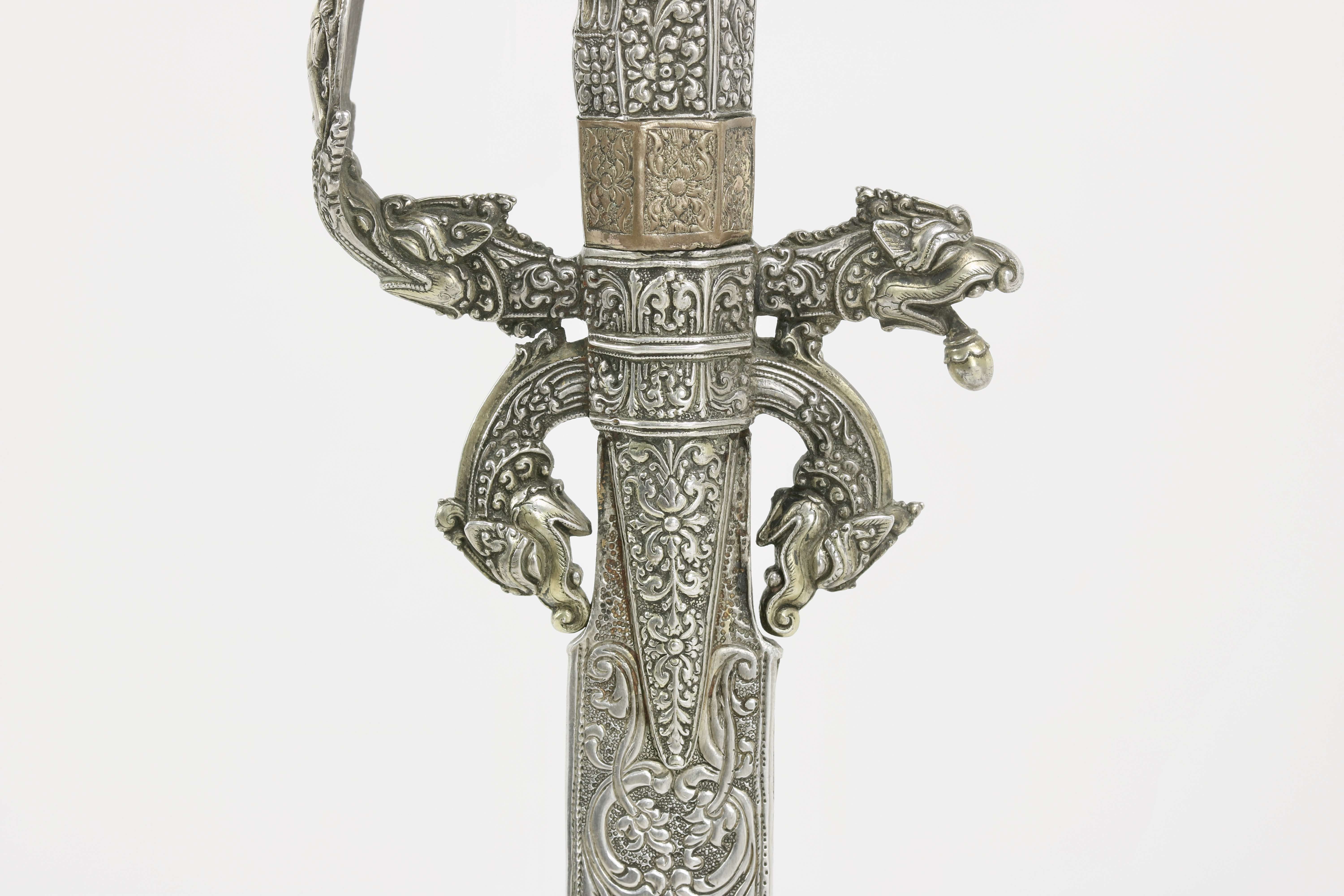