The kasthāné (often called simply kastane), is the sword of Sri Lanka. In colonial times, the island was known as Ceylon.1 The Low Countries, situated in the west of the island, fell under the control of colonist invaders in the early 17th century. The Kingdom of Kandy was situated in the highlands of the central and western part of the island. Here, Sinhalese culture survived relatively undisturbed for two more centuries until their capital, Kandy, was finally overrun by the British in 1815.

Among connoisseurs of the arts of Asia, the Kingdom of Kandy is well-known for its outstanding metalwork and their fine carving of natural materials like ivory, horn, coral, and wood. During the height of Kandyan craftsmanship in the 18th century, their workshops produced some of the finest and most complex works of handicraft of Asia.

There were three types of kasthāné:

First, the kasthāné of Kandy that were made in the royal workshops of the King, who bestowed them upon noblemen and local chieftains as symbols of rank and office, or as gifts to diplomats. These typically have a highly ornamental hilt of gold, silver, of horn, such as this one. The blades varied from short to long, light to heavy, but all had functional blades that were at least capable of fighting.

Second there were pure fighting pieces, often quite heavy, following the same general style as the first class but with only rudimentary decoration.

Third, there were the kasthāné of the Low Countries. These were made under foreign control to be bestowed on local puppet leaders. They tend to be short, light and purely ceremonial. Although technically sometimes well-made, they are out of proportion, look somewhat clumsy and lack the aesthetic appeal of the swords made in the Kingdom of Kandy. 2 After Kandy fell to the British in 1815, only this type remained in production.

An impressively large kasthāné, dating from the 18th century. It is of the first, native Sinhalese type, as described above.

Its blade is massive for one of these and is exhibiting the irregularities often encountered on swords used in combat. The irregularities are caused by repeated sharpening and polishing of edge damage. There is a lap weld in the middle of the blade, this could mean a part of the blade was replaced or perhaps broken and welded back together. Such lap welds are incredibly strong, resulting in a fully functional blade again. The blade is not much to look at.

Despite being clearly a fighting piece, the handle is every bit as nice and ornate as the more ceremonial pieces. It was perhaps worn by a nobleman of a Kandyan fighting class. Sinhalese swords and daggers are primarily collected for the craftsmanship and aesthetic appeal on their hilts. This one is a classic example of the better Kandyan work: The handle is carved out of a large piece of dark brown horn.

Its most striking feature is the pommel, carved like a simha, the highly stylized Sinhalese lion, their national symbol. The complex head is made of several pieces of horn such as crest and ears, skillfully joined. Such pieces were easily replaced when damaged, and on this example not all pieces seem of the same period but the work is excellent. There is also a very skillful period repair on the right side of the mouth.

The whole is articulated in great detail, with the rest of the hilt elaborately carved with several layers of curly manes. The ferrule is missing. The hilt further comprises of a D-shaped knucklebow, emerging from the mouth of a mythical sea creature, the makara, it terminates in the peacock-like head of the serapendiya, a mythical bird. The knucklebow is elaborately carved and gilt, both inside and out. From the opposite side of the hilt emerges yet another makara head with its characteristic snout like a tapir.3 Then, finally, two more makara project forward and turn inwards into the base of the blade. The forte is held firmly in place by two thick, triangular langets that are -again- elaborately carved and gilt. The forte of the blade is inlaid with designs of flowers. Such designs are said to be forms of Sinhalese heraldry relating to the class or caste of the owner.4

A large and very impressive kasthāné, with fighting grade blade that shows it has been put to use, probably on many occasions. Yet, its hilt represents the finer craftsmanship that is associated with the royal workshops of the Kingdom of Kandy. Sinhalese arms are still a relatively under-appreciated and therefore under-valued niche in the antique arms collecting community. Because of this, they present great value for money considering the kind of materials and craftsmanship involved in their manufacture. 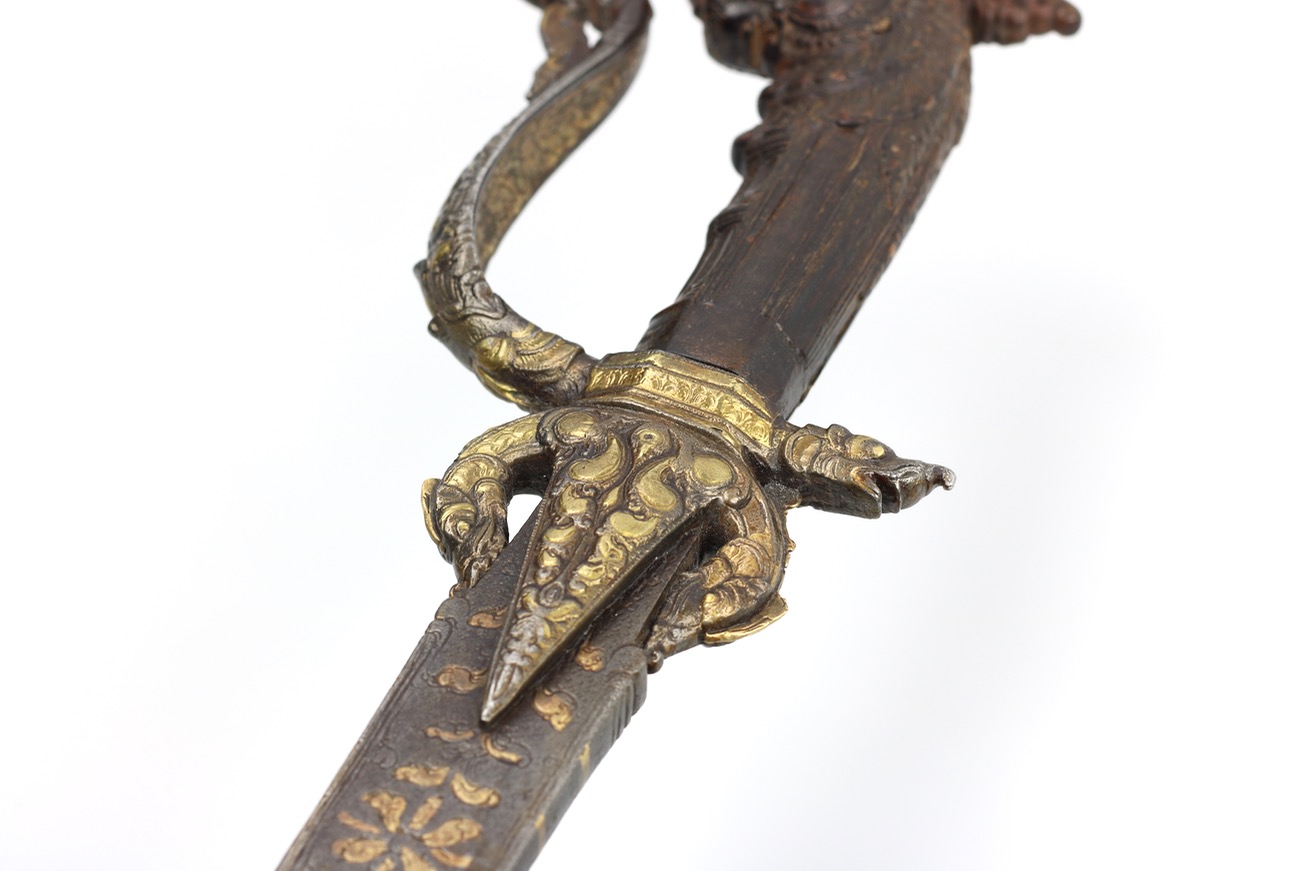 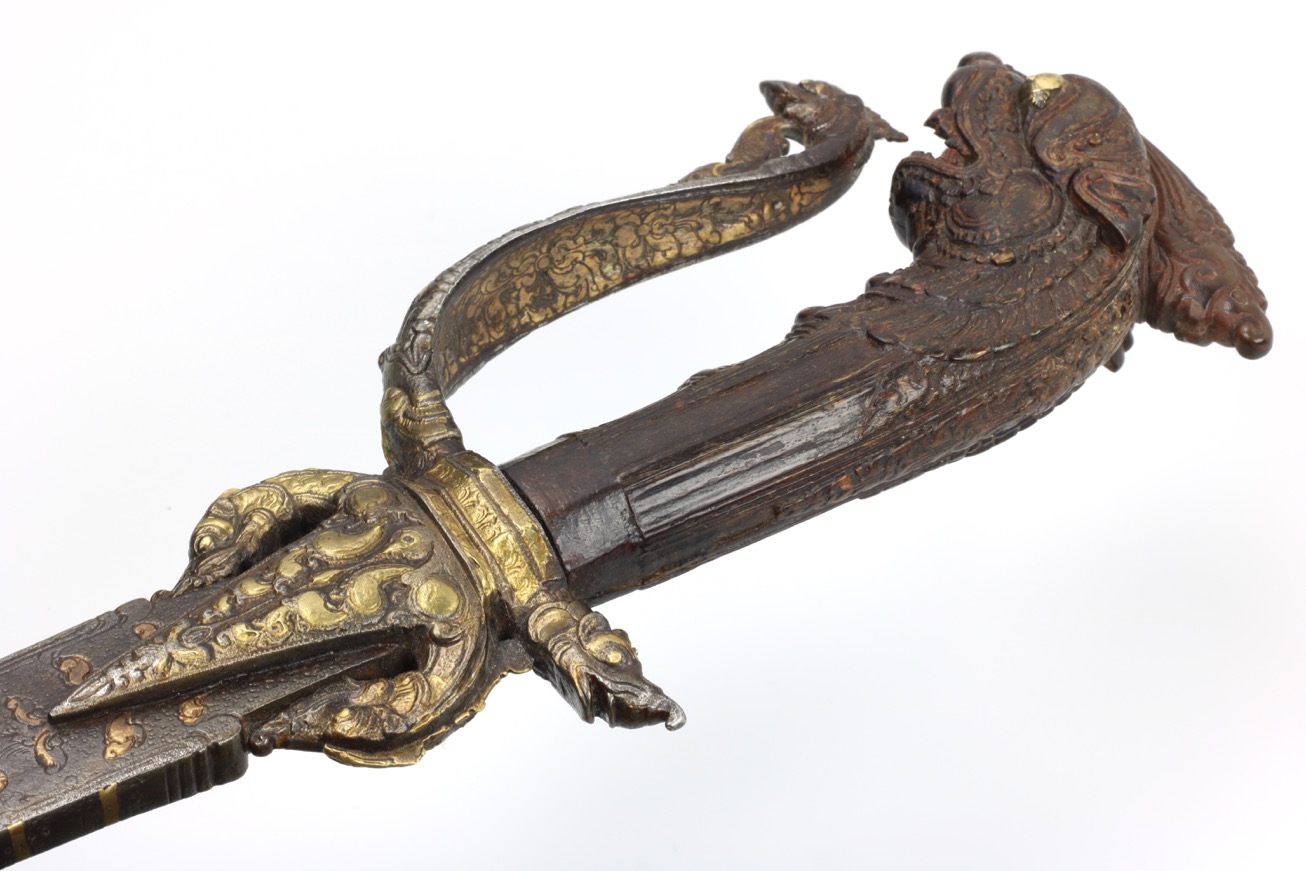 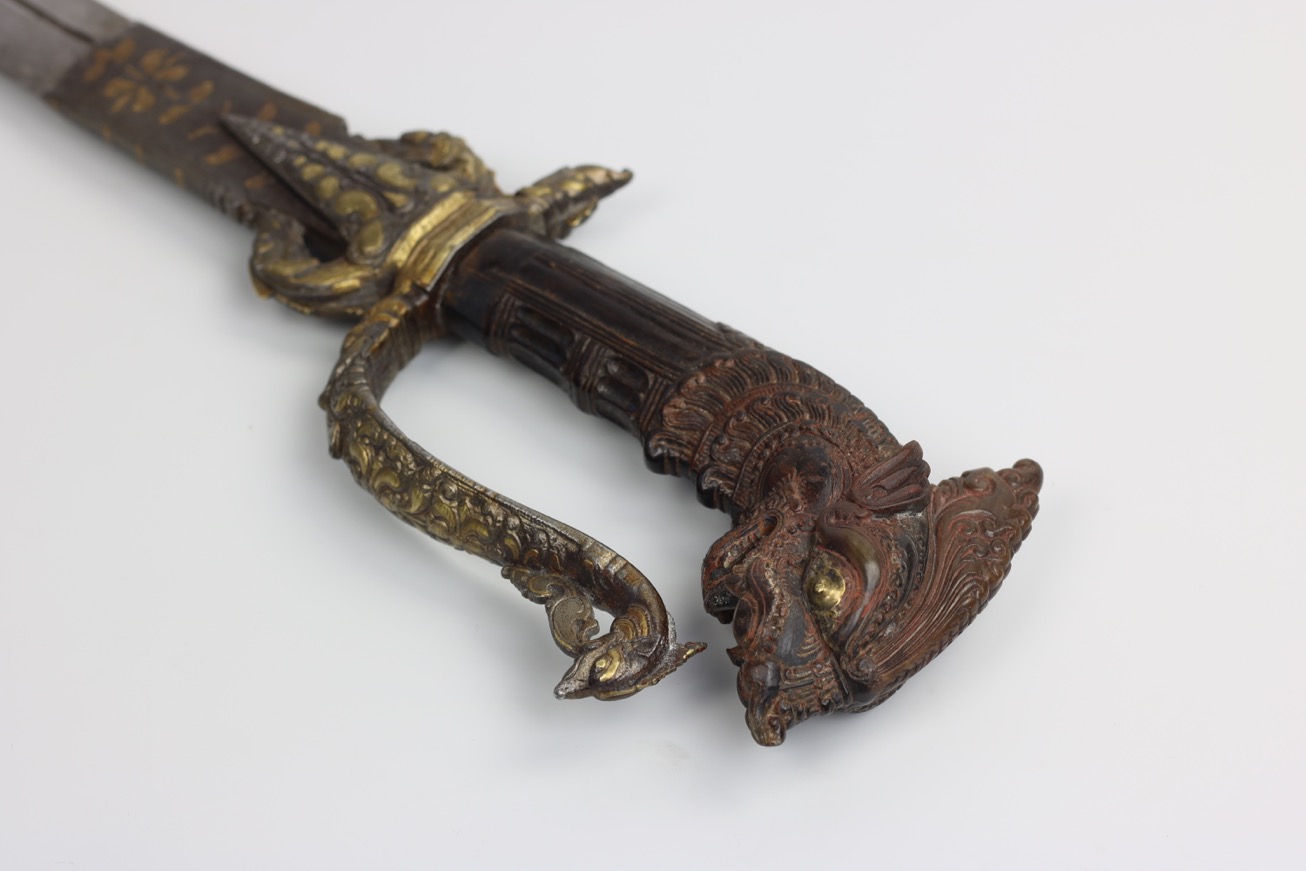 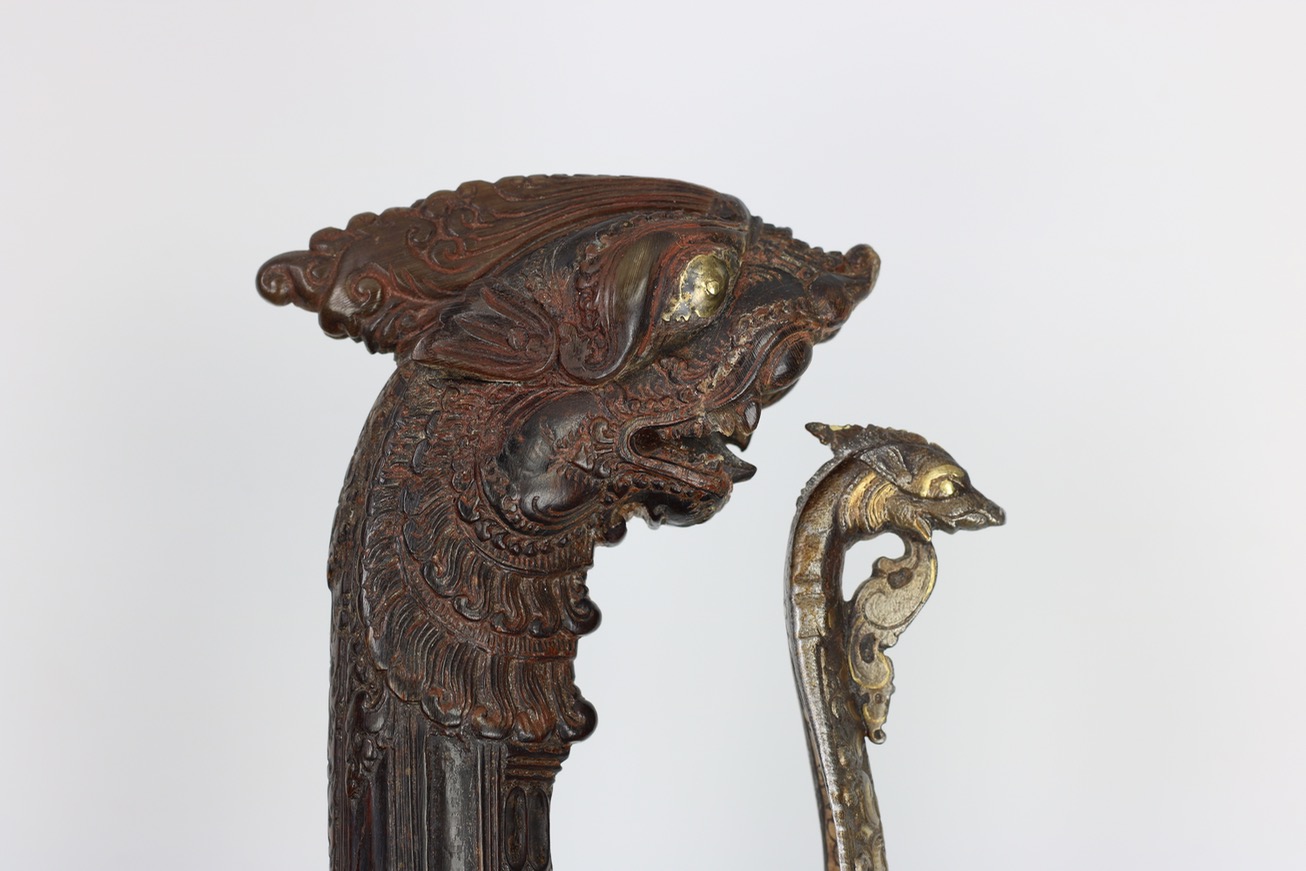 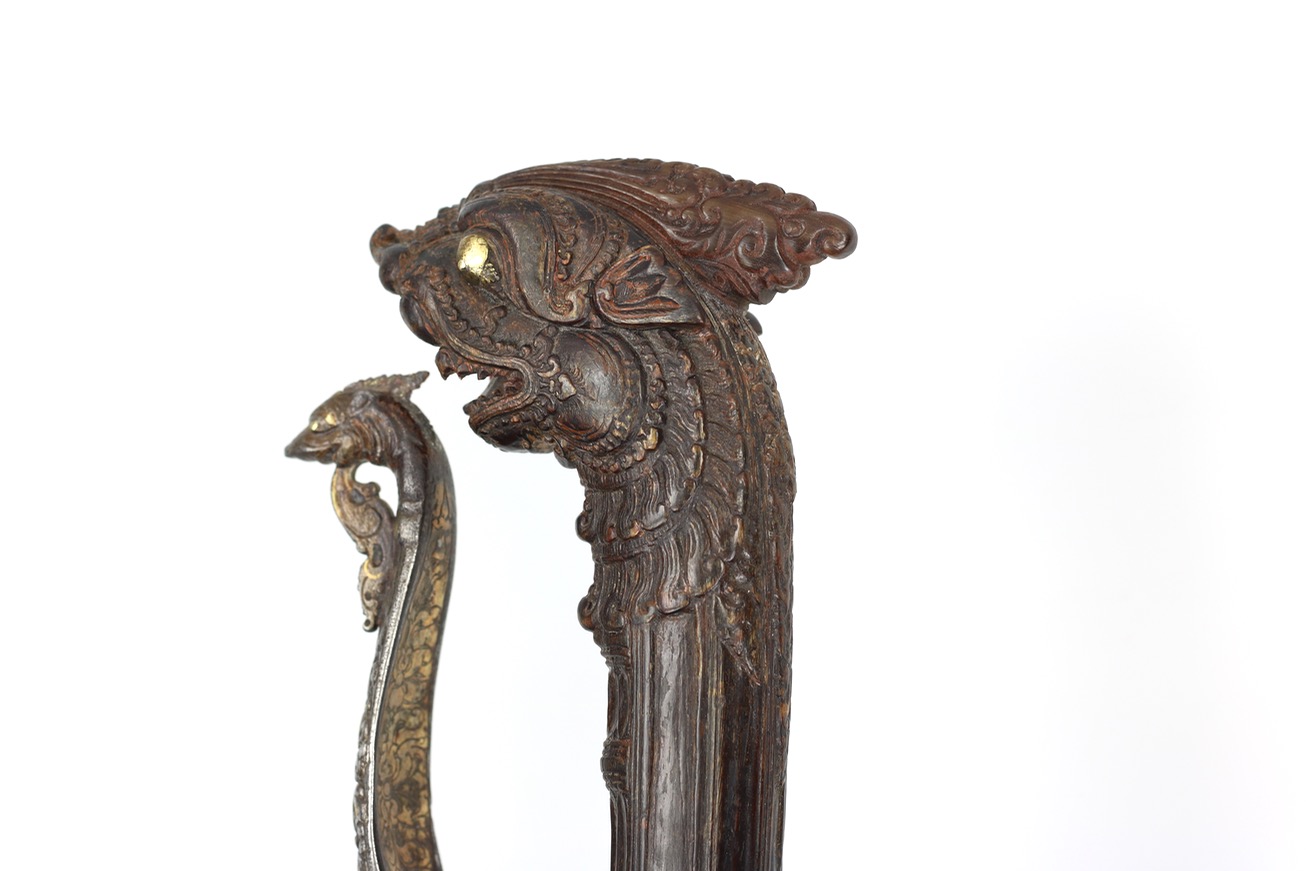 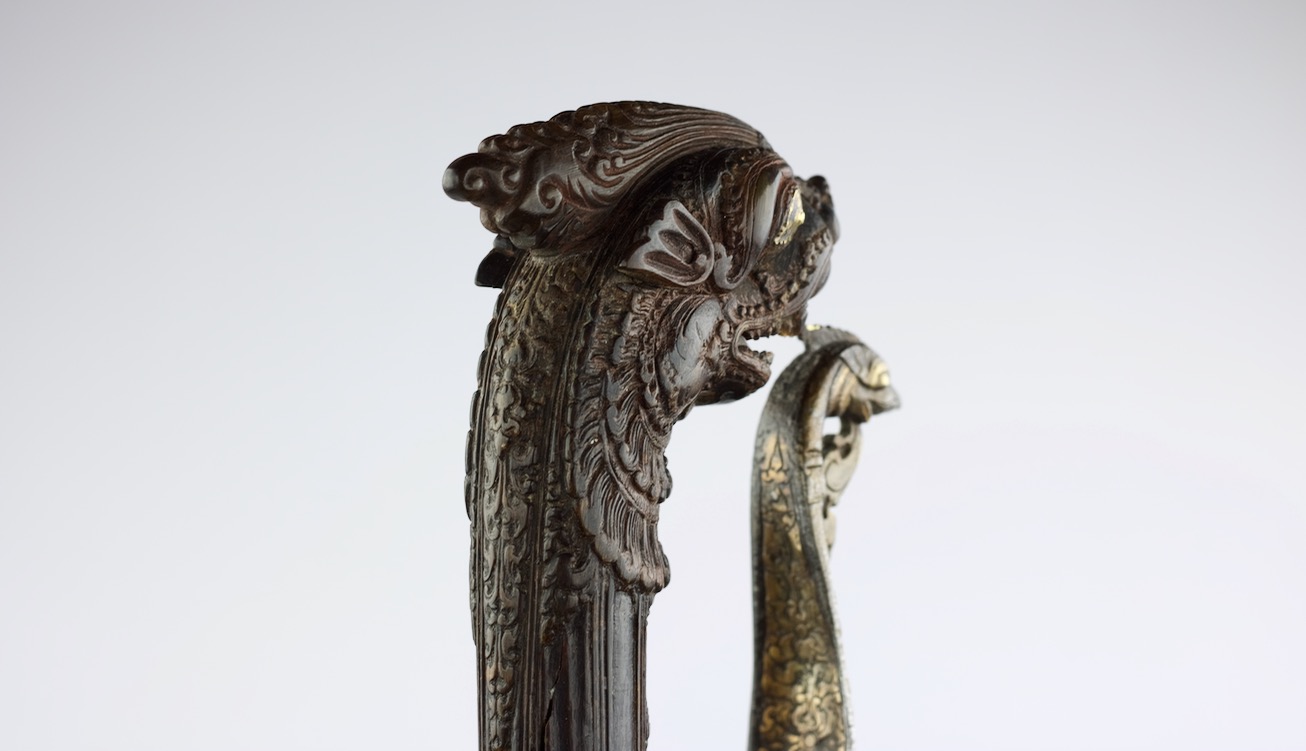 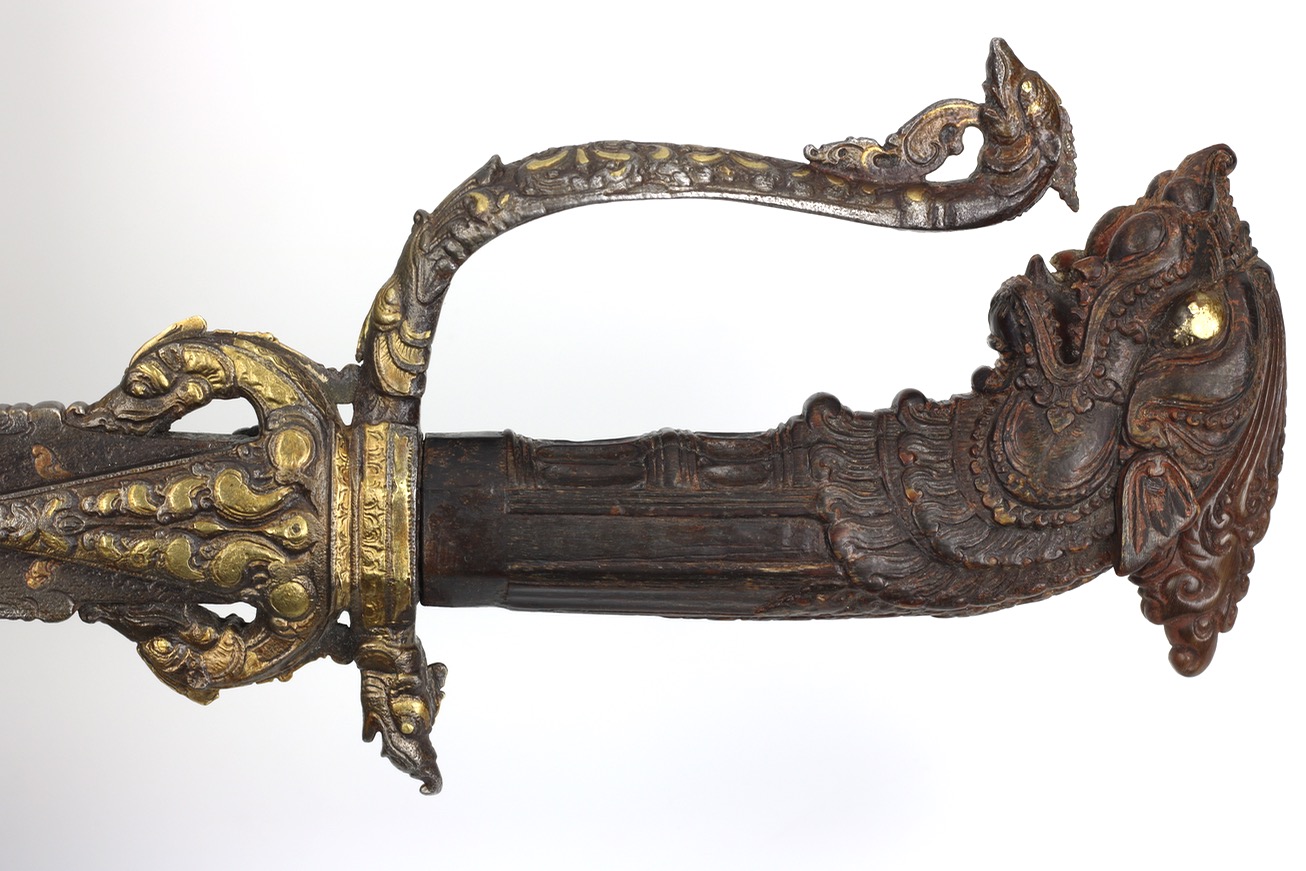 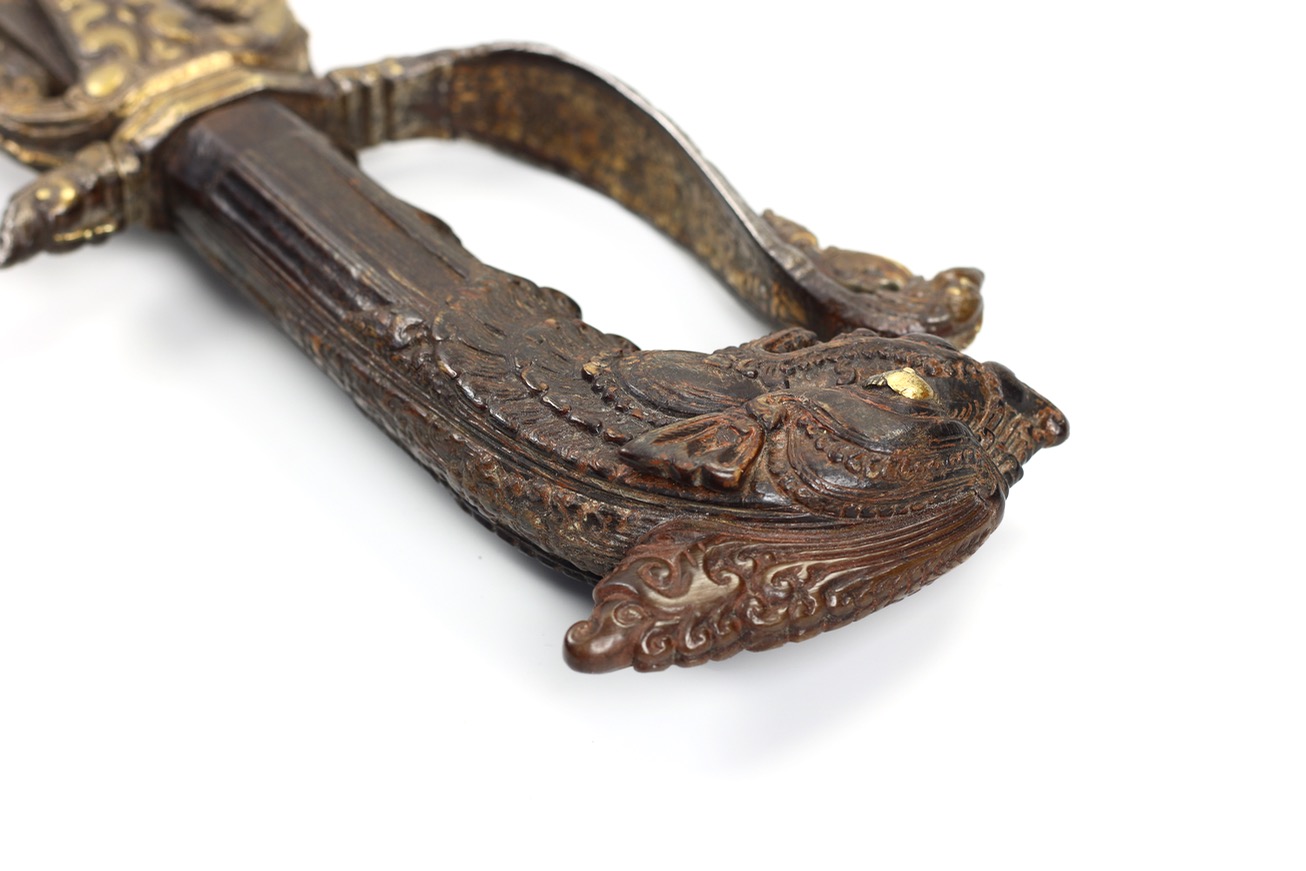 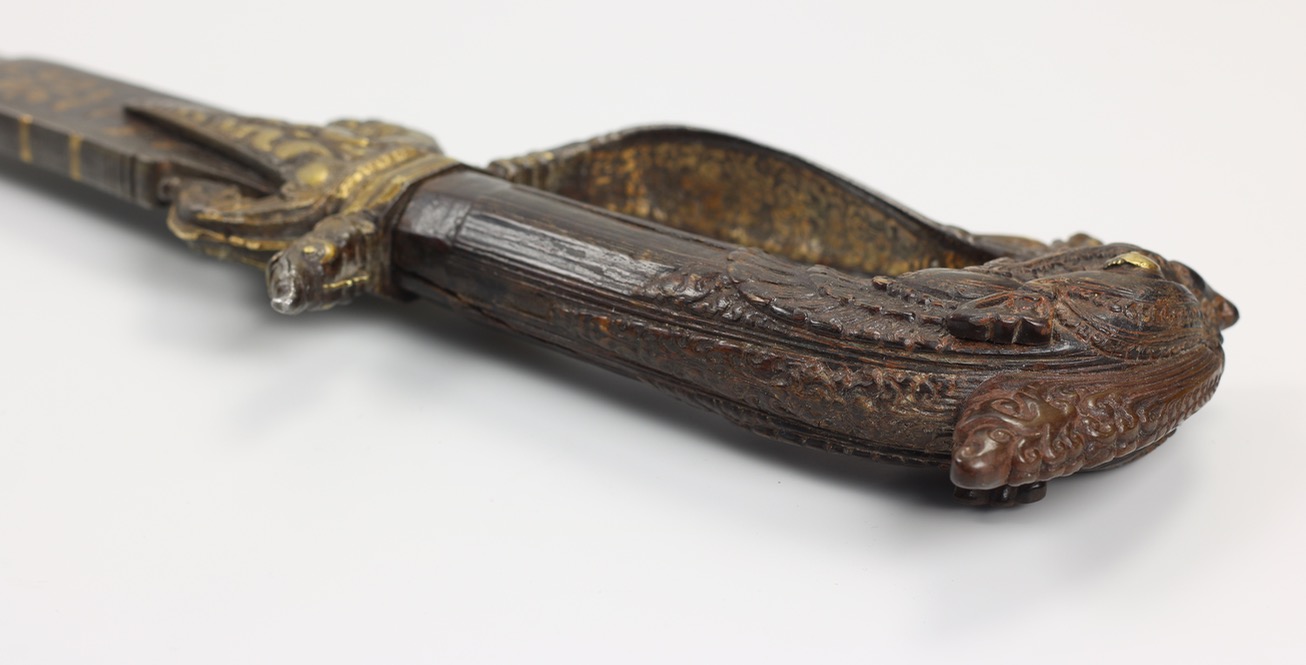 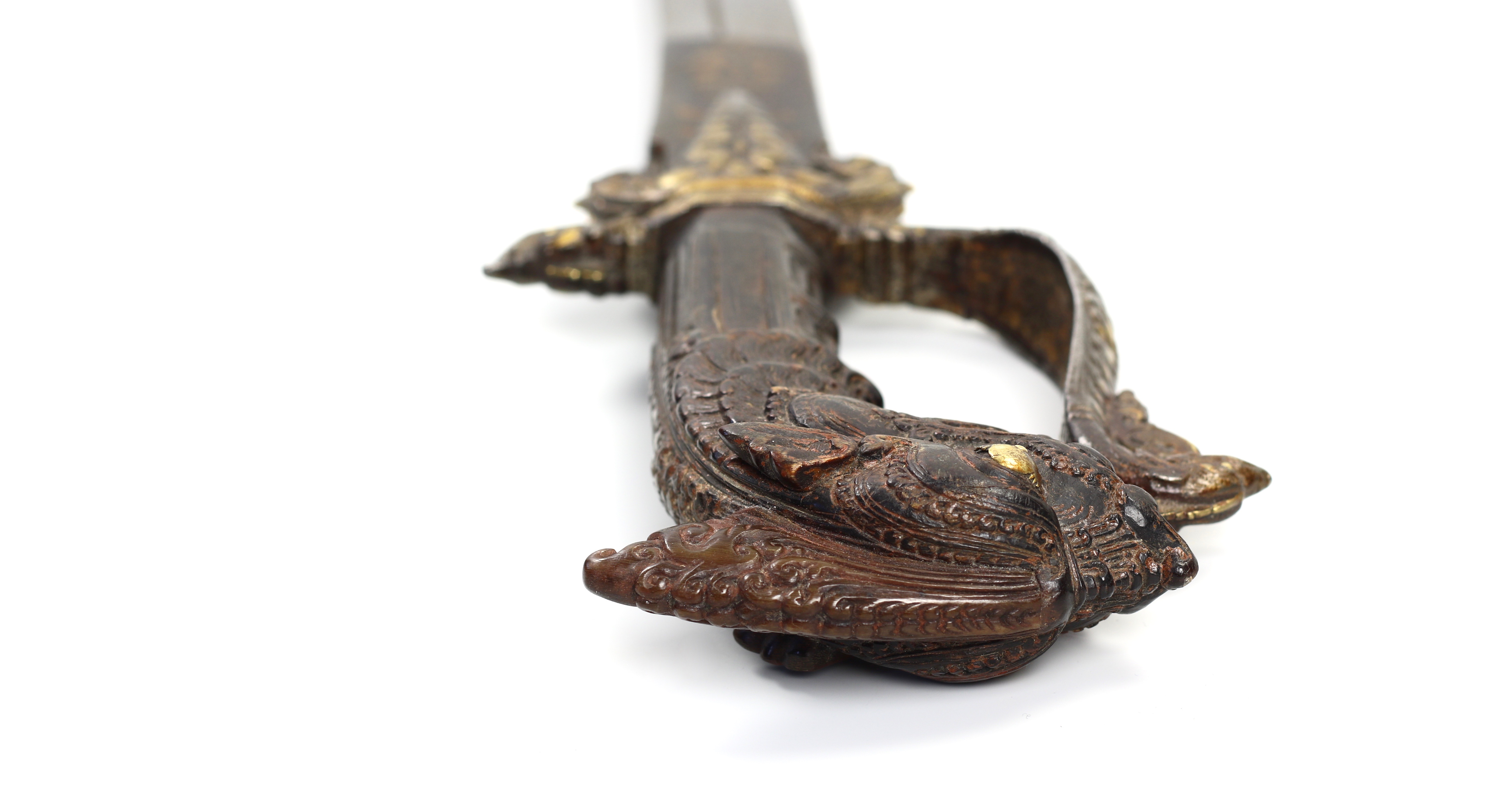 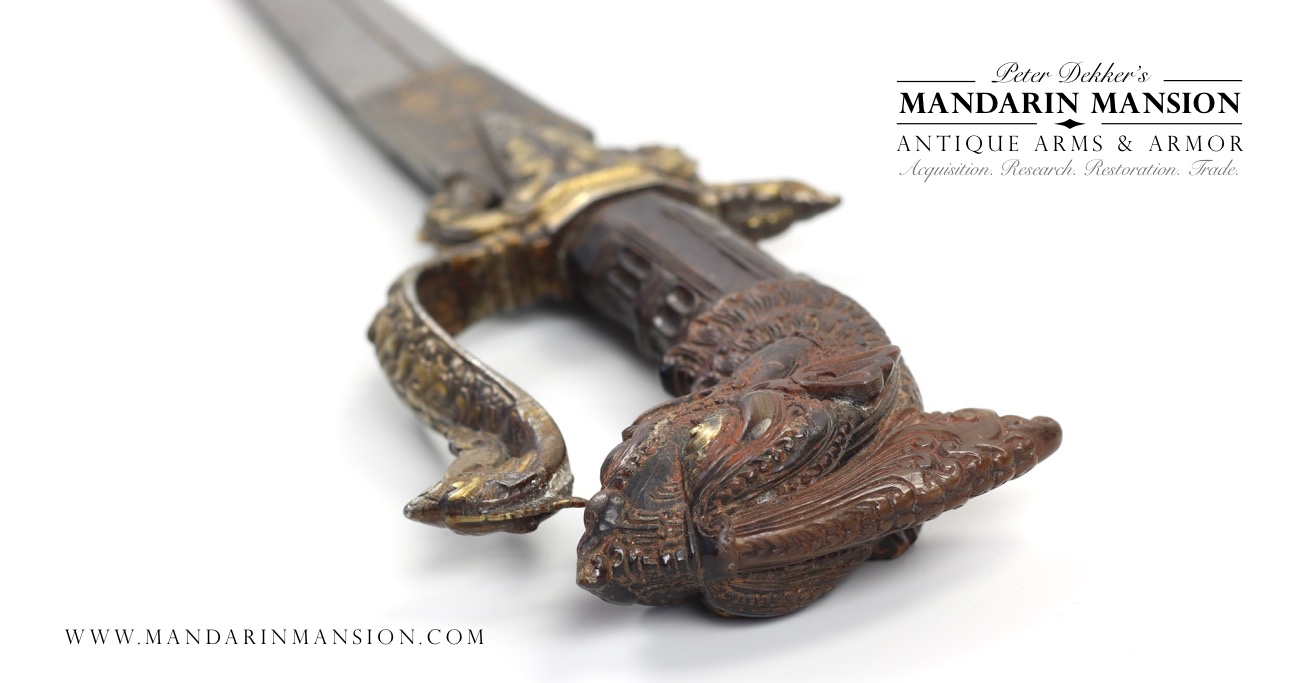