A fine Kandyan knife, or ul-pihiya, probably mid 18th century. The type of knife is known among collectors as piha-kaetta but strictly speaking that term only applies to the larger, chopper-like examples.

The better examples were made in the king's own Four Workshops (pattal-hatara) where artisang made them exclusively for the king, who in turn bestowed them to his nobles and officials. Adigâr, a class of appointed feudal lords that also acted as ministers in the king's court were presented with a silver mounted kasthāné, a cane, a halberd, and a knife as a sign of rank and office.

"When he first promotes them [the Adigar] (…) he (...) gives them a sword, the hilt all carved and inlaid with silver and brass very handsomely, the scabbard also covered with silver - a knife, and halberd; and lastly, a town or towns for their maintenance. "1

Silver is predominant on these knives and swords because in the Kingdom of Kandy, only the King himself was allowed to wear arms with hilt and scabbard constructed out of gold. 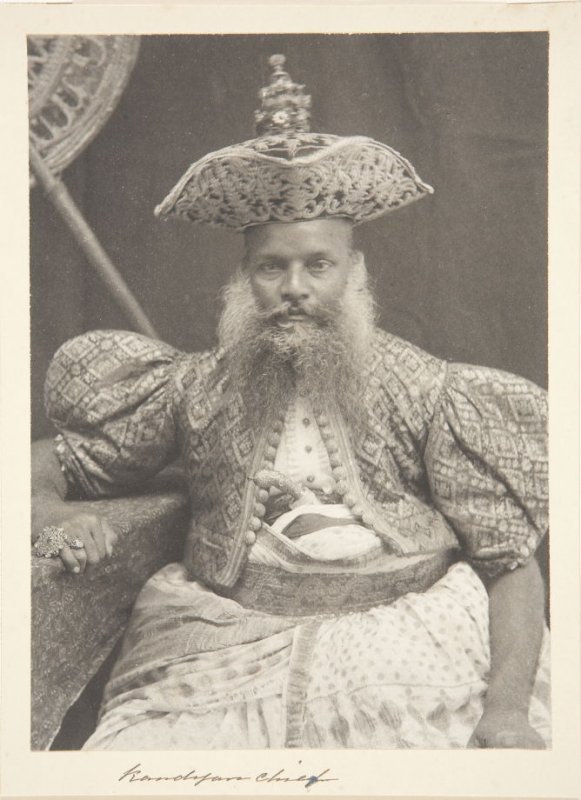 Exhibiting the kind of quality we expect from the Kandyan royal workshops, all mounts of this example are entirely made of solid silver. As such it is the only one of its kind I have seen so far. The silver slabs that form the pommel and collar piece are thick and solid. The base of the blade is chiseled and then silver plated.

The decor consists of the typical designs found on these, with the pommel and collar exhibiting complex scrollwork called liya pata. The silver sheet plating on the base of the blade with typical Sinhalese liya vela scrollwork. The single groove is decorated with a repeating honeysuckle motif, called vęl-pota. The tip of the blade is inlaid with silver vine work that is called sina mala.2

The overall form also represents a rarer type. Most of these rather have the more common downward curve, somewhat like a pistol grip but on this example the hilt turns down and then back. This is a reference to its earlier shape resembing a mythical bird. Rare ul-pihiya with bird-head pommel. The example described here is a further abstraction from this design.
Sold by Mandarin Mansion in 2017.

Many are puzzled as what these knives are for. There are plenty of references to knife fighting in Sinhalese historical literature but these don’t seem too suitable for that purpose unless in emergencies. As some come with a stylus for writing, it is possible that they were mainly for cutting palm leaf to write on. They are also very ergonomic as a page-turner for books, which may have been another function.

In good condition overall, with minimal losses. The only missing piece is a silver sheet at the pommel, and a little bud shaped finial these tend to have at the back. I decided to leave it untouched, as you can now see the heavily patinated steel underneath which -along with the quality of work- is the only true reference to its age. The thick patina also suggests it is probably not a recent loss, but gone for a long time. Some play in the handle scales. Some minor damage at the tip of blade, see pics.

An interesting old Sinhalese knife that is entirely clad in silver, its grip and characteristic collar piece are made of thick, solid silver plates. Silver was the most expensive metal that the highest officials could own, as gold was reserved for the king alone.

Notes
1. Robert Knox; An historical relation of the island Ceylon, in the East Indies. Printed by R. Chiswell. 1681. Page 53.
2. for an excellent overview of Sinhalese decorative motifs, see: Ananda Kentish Coomaraswamy; Mediaeval Sinhalese Art, Being A Monograph On Mediaeval Sinhalese Art And Crafts, Mainly As Surviving In The Eighteenth Century, With An Account Of The Structure Of Society And The Status Of The Craftsmen.