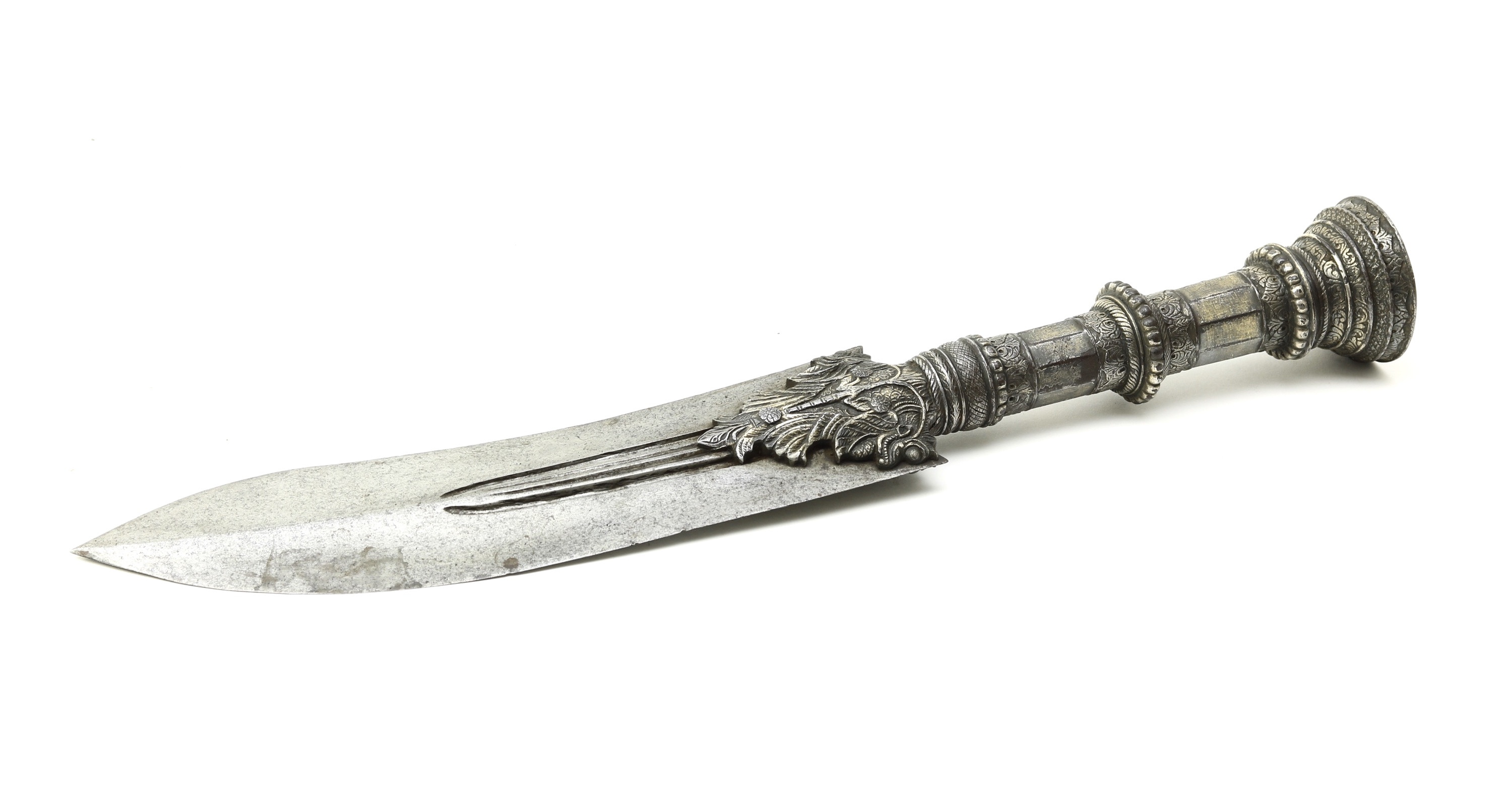 It has a substantial blade, both wide and thick, with the characteristic gentle curve. On either side it has a sunken panel with a raised rib, the rib itself has two grooves of slightly shallower depth than the sunken areas around it.

The blade is held to the socket by means of two langets, attached to the base of the blade with three rivets.

The langets are chiseled with designs of yāli in bird form.1 Their heads are on either side of the langet while their bird-like tails join to form the palmate motif projecting forward.

The socket is entirely decorated with chiseled and engraved motifs. It has three bands of beaded rims and a large conical mouthpiece where the shaft is inserted. Between the rims, the shaft and mouthpiece are decorated with geometric and floral patterns.

Both socket and langet are overlaid in silver, with remains of a gold wash. Gold over silver was a common finish for the better south Indian arms of the 17th century.

The yāli seen on the langets was the royal emblem of the Vijayanagara empire, and as such is a typical motif found on various types of weapons from the Tanjore armory.

Most south Indian spearheads, although exhibiting many similarities to ours, have a rounded base. This example has a slightly barbed base of the blade, and is of a somewhat rarer form.

A number of south Indian spears with heads with the more common rounded bases were presented to the Prince of Wales on his 1875-76 visit to India. They are now kept in Sandringham House, and were published in Arms and Armour at Sandringham by C. Purdon Clarke. Nine of the published examples were presented by "H. H. the Princess of Tanjore, Madras Presidency", two were presented by "the Zemindar of Salur, Vizagapatam, Madras Presidency" and the origin of two others is unspecified. All are believed to date from the 17th century.2 Another is in the Government Museum, Chennai, which Robert Elgood dates to the late 16th century.3 An example in The industrial arts of India is described by Birdwood of being of Vizianagram work, based on Madras temple architecture.4 An example nearly identical to the one illustrated above, from the Jacques Desenfans Collection was auctioned at Bonhams New Bond Street, 10th April 2008. Lot 284 for €6,306.

Lastly, where is a south Indian straight spearhead in the Metropolitan Museum, accession number 36.25.1931 with two facing yāli on the langets. It was purchased by Walhouse in Tanjore in 1863 during the disbanding of the Tanjore armory. It ended up with London based dealer W.O. Oldman, who sold it to George Cameron Stone. The Metropolitan Museum obtained it at the bequest of Stone. It is dated to the early seventeenth century.5

Most such spearheads found in collections are thought to date from the 17th century. Those with the rounded back tend to have Madras provenance, which is present-day Chennai. The beaded work seen on the socket of ours is distinctive, and a common sight on the weapons coming from the Tanjore armory.

The yali depicted on the base of ours is also a very common motif on Tanjore arms, and was the royal insignia of the Vijayanagara empire which lasted from 1336–1646 A.D. I would, therefore, think the piece is most likely also from Tanjore and dating to the first half of the 17th century.

It is in good condition, not overcleaned or corroded like most, and retaining most of its silver overlay and some of its fire-gilt finish. Some very minor edge damage.

An impressive piece. A very rare type of south Indian spearhead, most likely from Tanjore and dating from the last decades of the Vijayanagara empire. 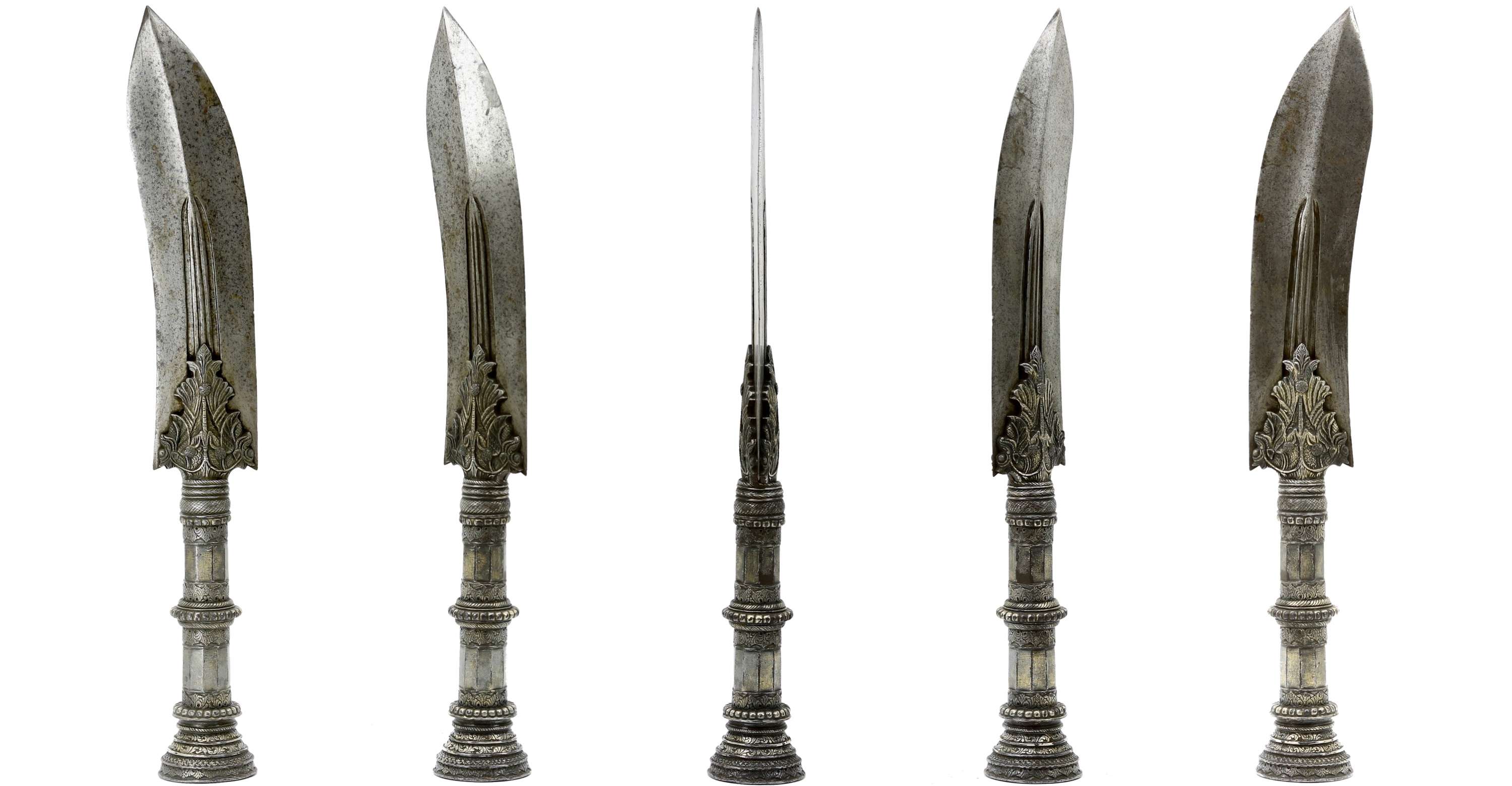 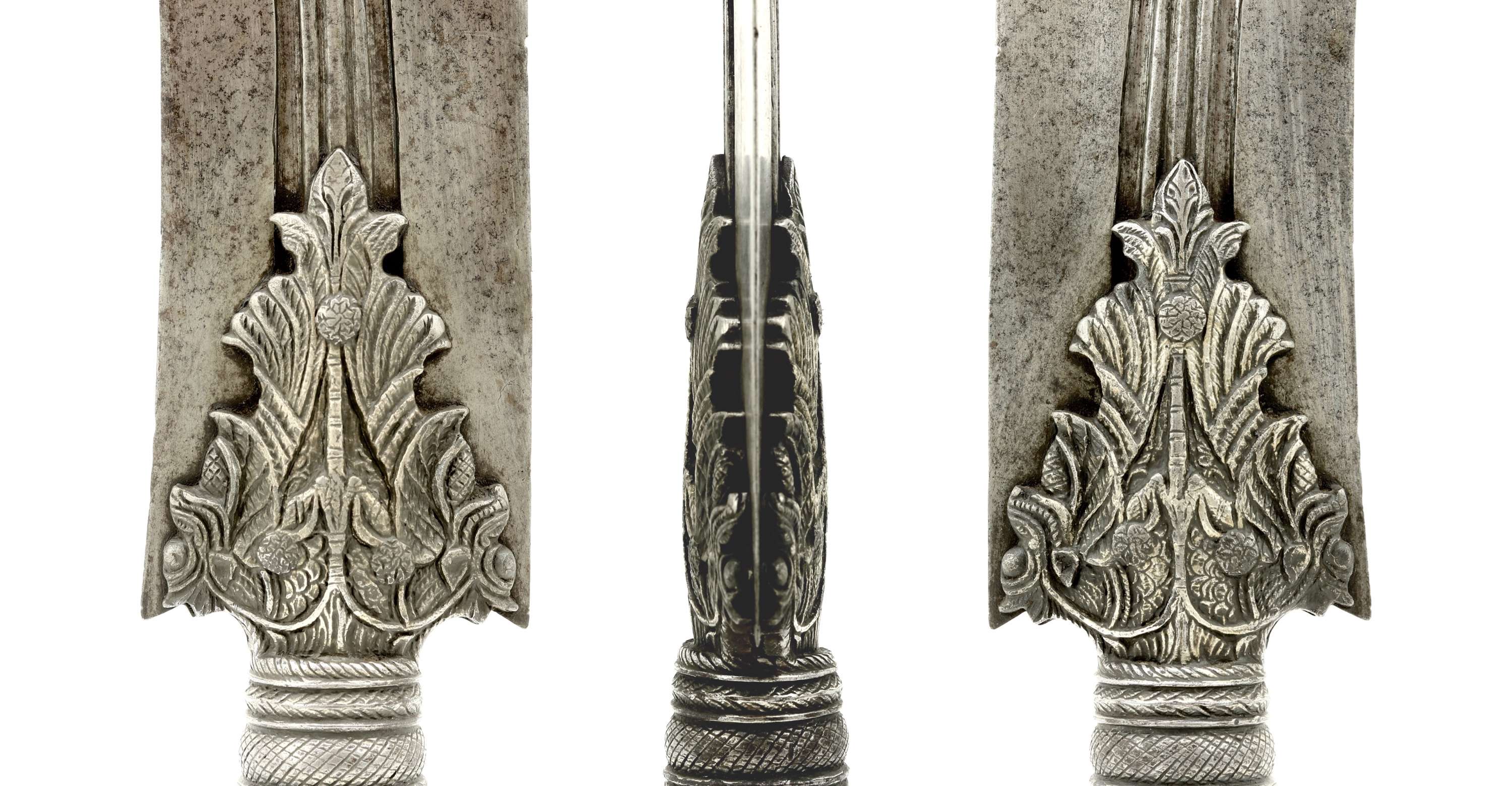 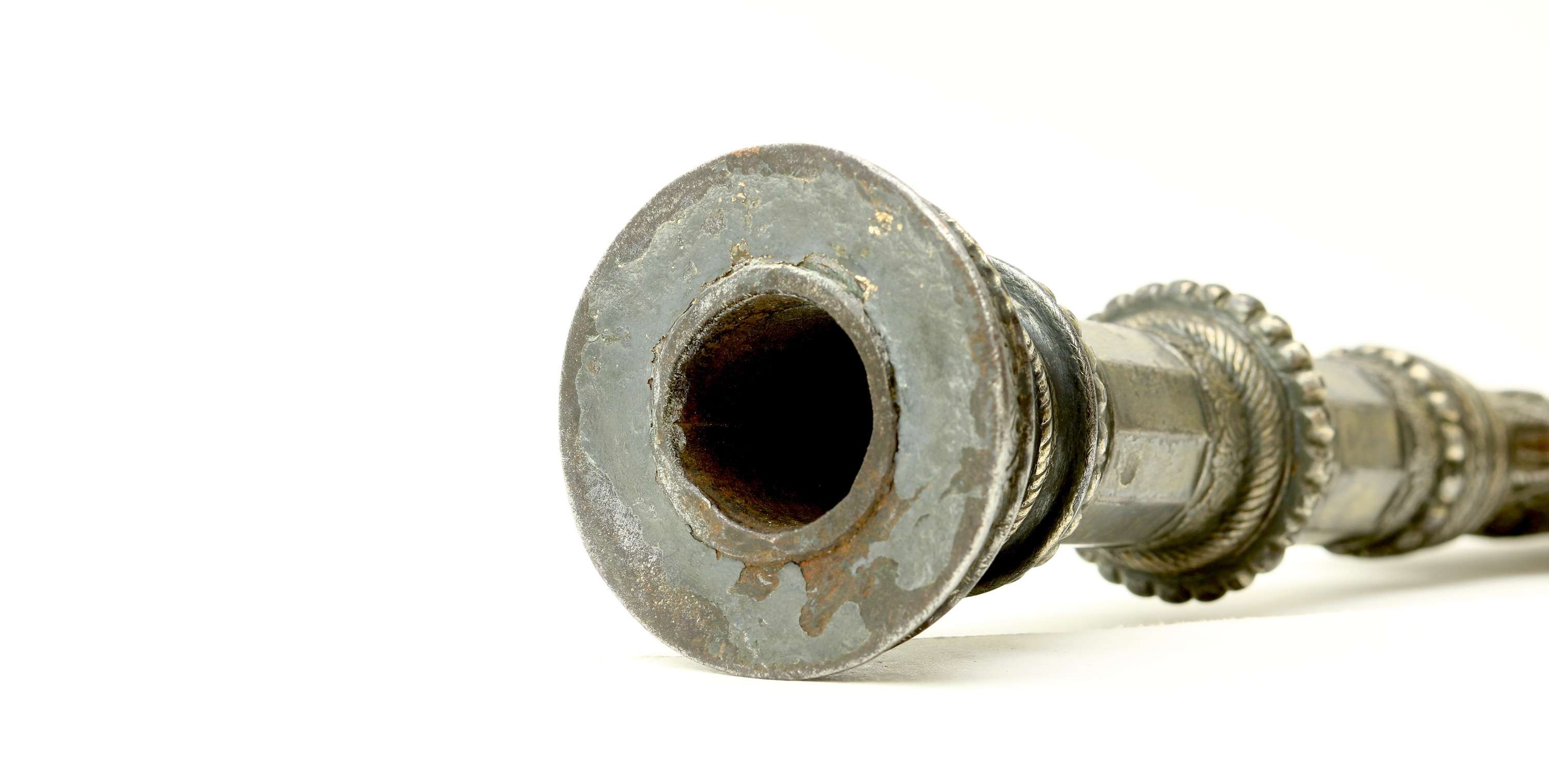 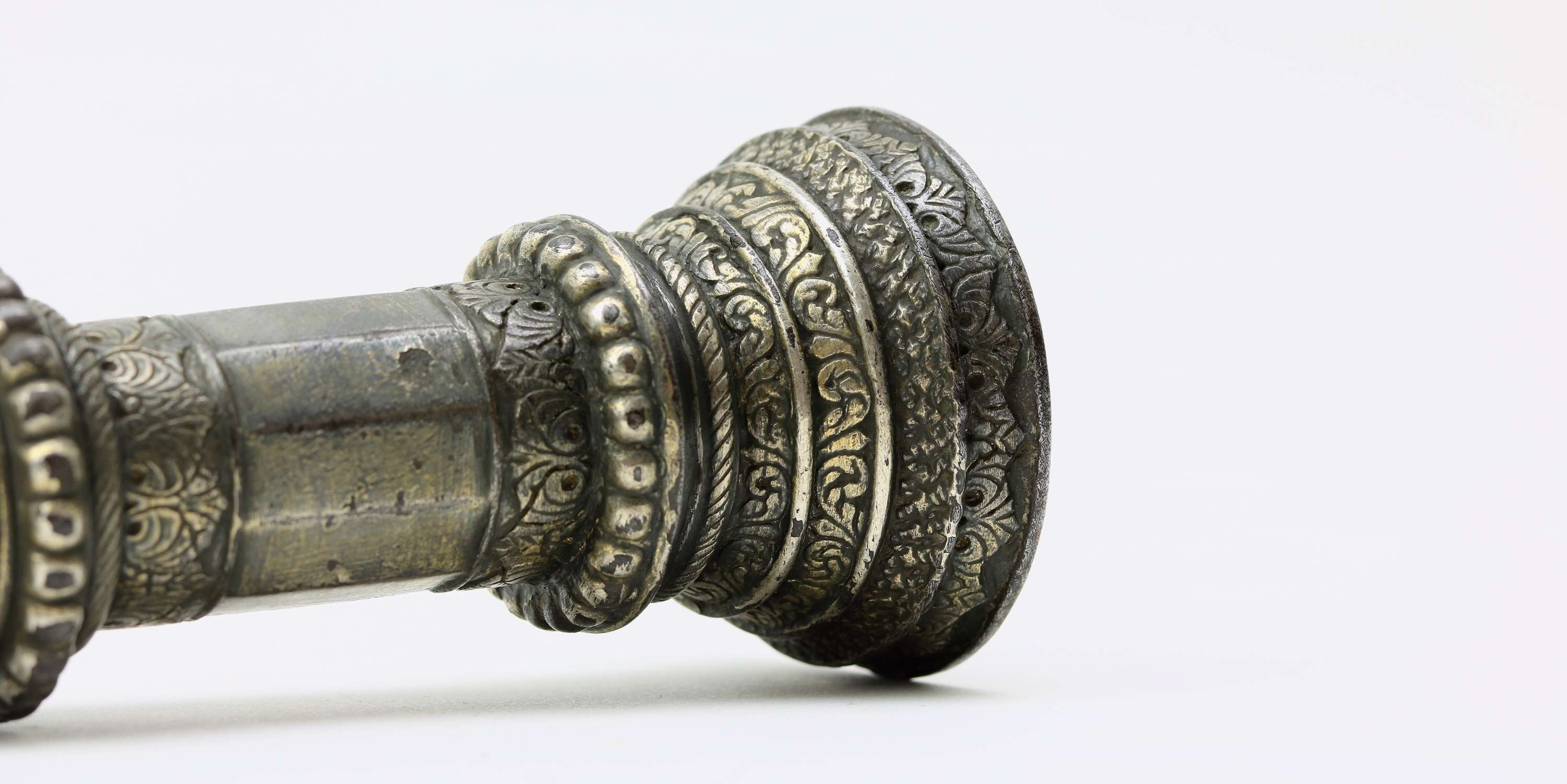