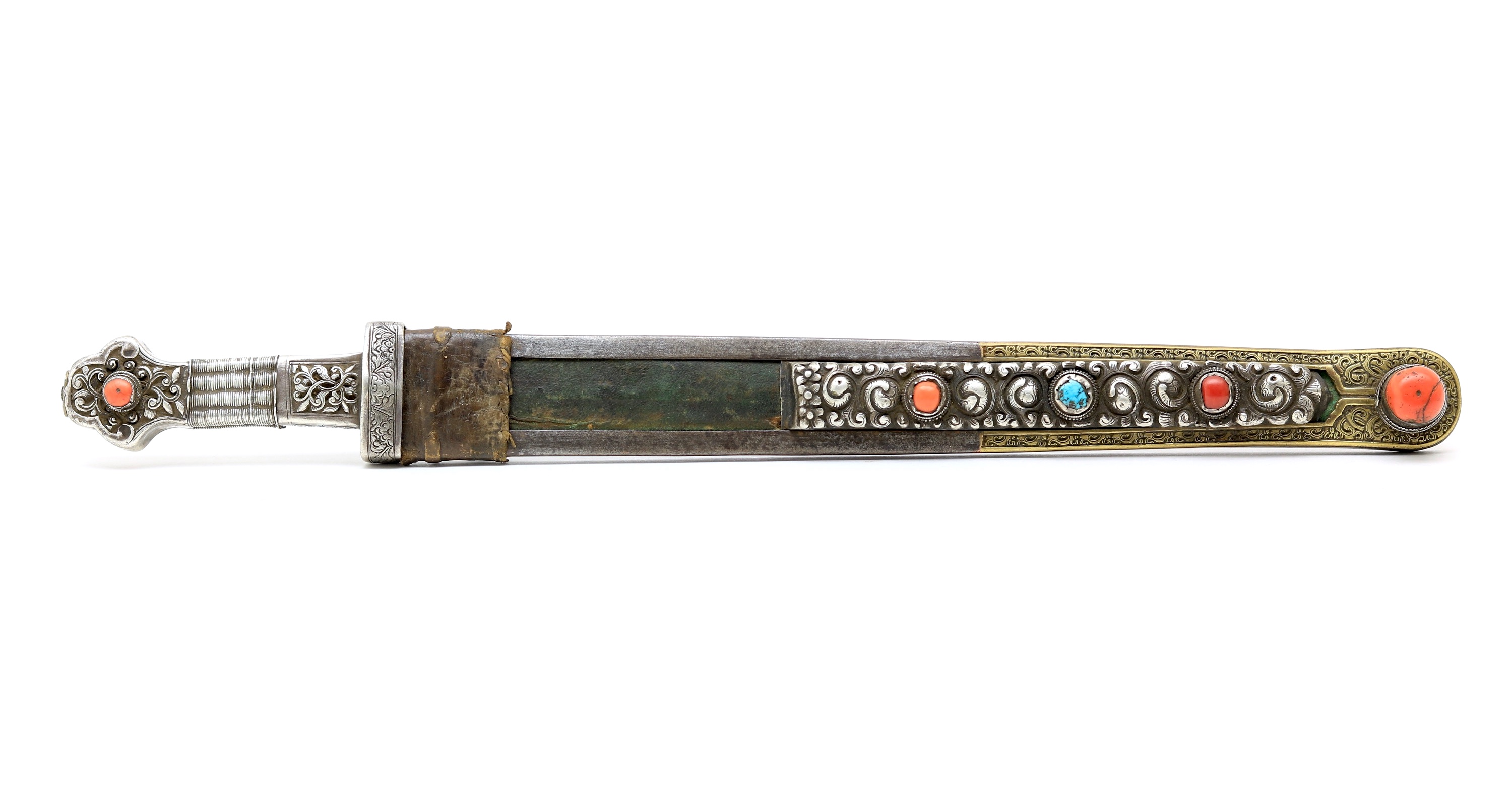 A typical example of a higher quality Tibetan shortsword. The single-edge blade is of characteristic form, being wedge-shaped in cross-section and gradually narrowing into an acute point. It follows the common Tibetan construction, being made out of rods of alternating high and lower carbon iron/steel that was folded upon itself and worked into a blade. The result is a blade with alternating light and dark lines that form a sharp bend near the tip, which is why collectors often call it "hairpin forged".

The hilt features a silver rectangular guard with engraved ornamentation, a large pierced ferrule with floral scrollwork, and a trefoil pommel with similar pierced floral scrollwork. The grip is wood, wrapped with silver wire. The pommel holds a piece of coral.

There are two interesting things going on at the pommel.

At the pommel end, the tang is peened over a British Indian coin, with the text "George VI King Emperor". Its size indicates that it is a 1/2 Anna coin, minted between 1946 - 1947. (See numista.com.) This is a lot later than I would otherwise date the piece. Especially the scabbard looks earlier. 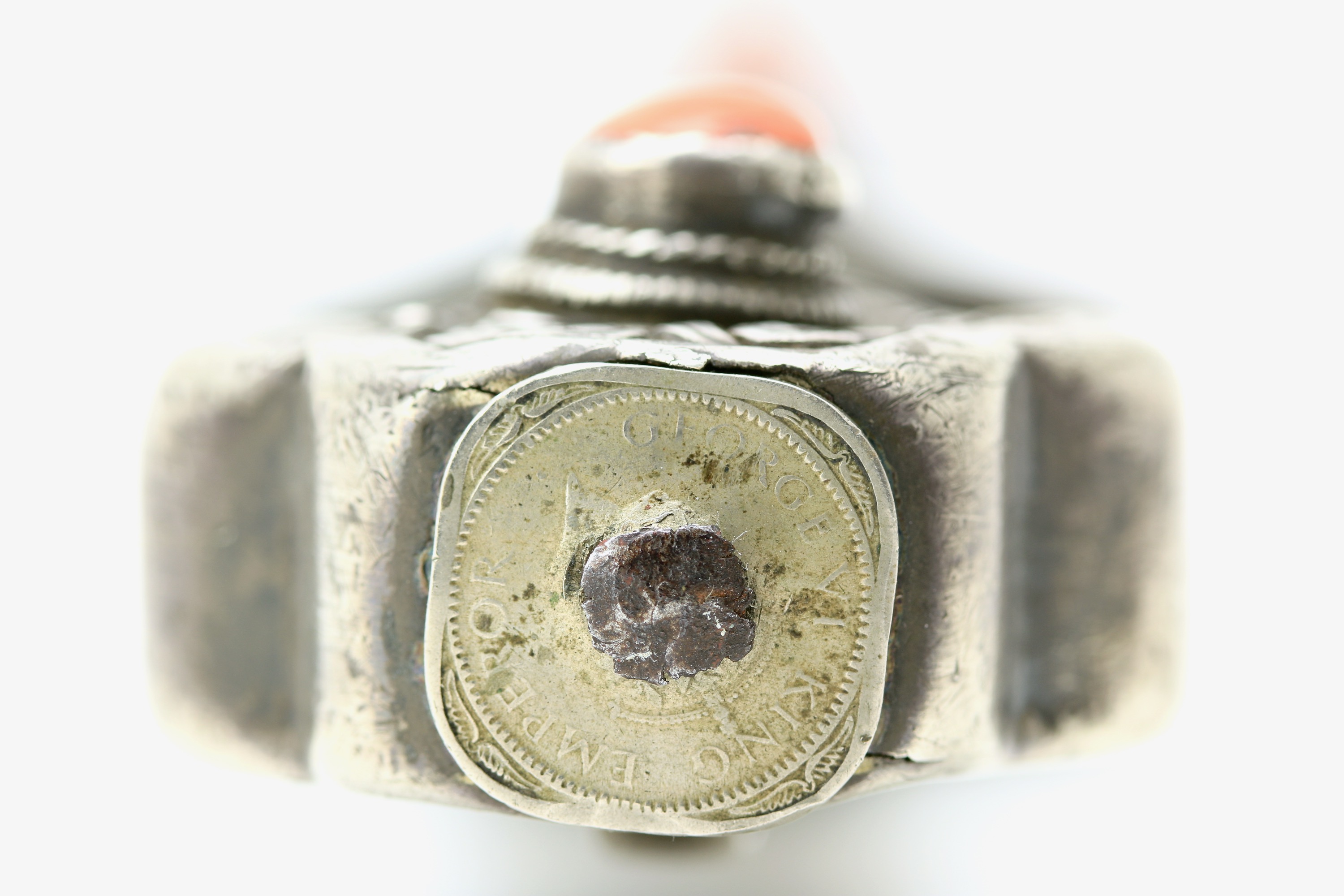 At the back, the pommel is stamped with a Chinese silver mark that seems to read "長谸" (changqiān). Probably a shop name. 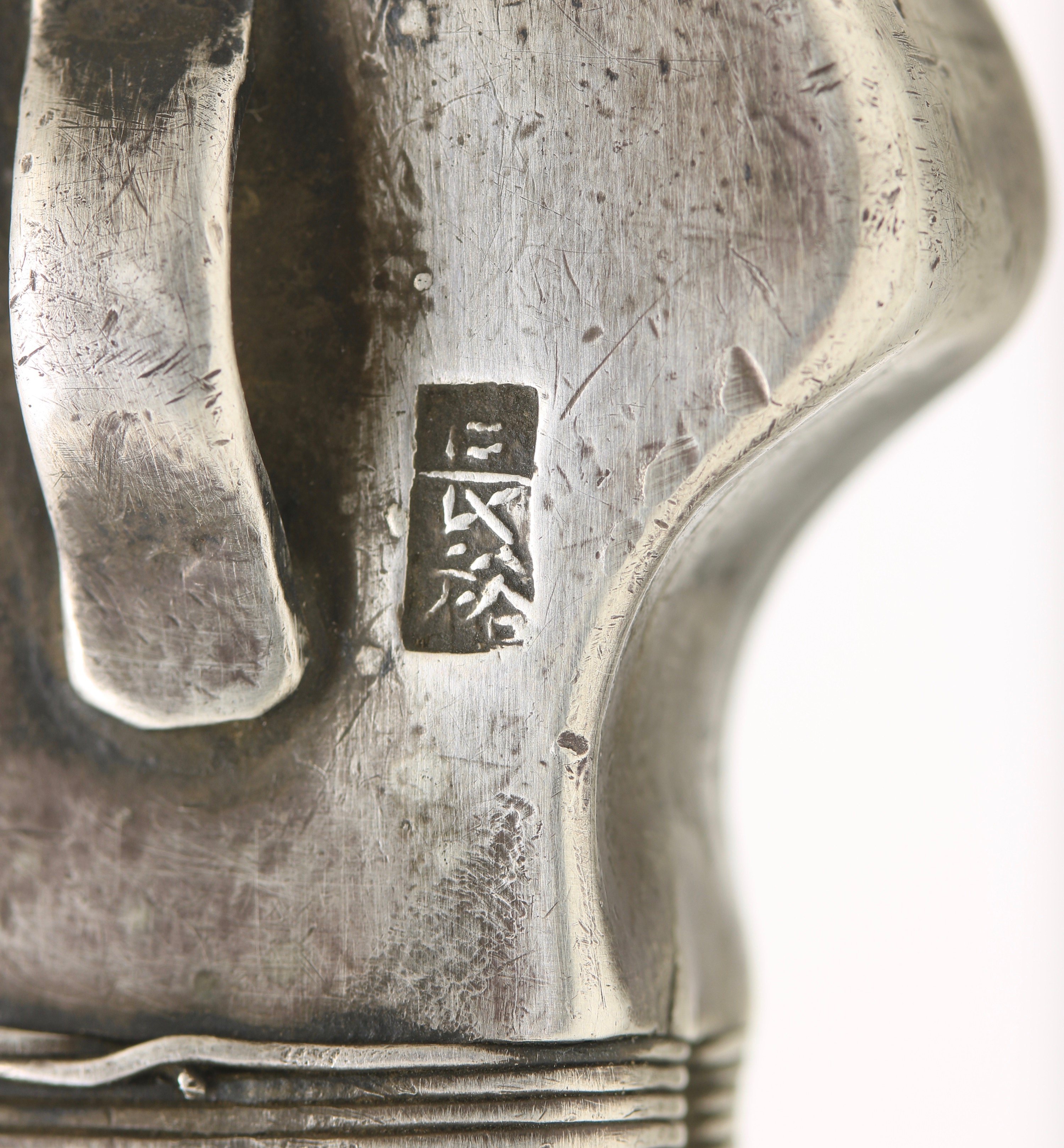 Chinese silver mark on the pommel.

The presence of this mark suggests it was either made in China for the Tibetan market, or by a Chinese silver worker working in or near Tibet. Either way, the coin, and the mark are very interesting and deserve closer study.

The scabbard features the typical iron U frame that holds the wooden halves of the scabbard, ornamented with a brass overlay on the bottom half, and with a fitting holding a large piece of coral. The legs of the U also hold a silver plate worked in high relief in repousse and then chiseled to further detail at the front. The plate is decorated with stylized waves and holds a coral, a turquoise and a carnelian. Only a slight part of the scabbard is unadorned, this is where the cummerbund, a broad sash, would go over the scabbard.

This piece, unfortunately, reached me with only fragments of the scabbard wood left. Luckily I had a spare Tibetan scabbard, so I took the leather-covered wood from that piece and cut it to size for this scabbard. So the wood and leather are antique and Tibetan, just not originally belonging to this piece.

Good condition throughout. Some patches of pitting on the blade, and some nicks to the blade age. Some normal age-related wear and tear. See photos.

A charming Tibetan shortsword, of typical form, but with some unusual features that invite closer study. The Chinese marked hilt on an otherwise purely Tibetan sword is fascinating. 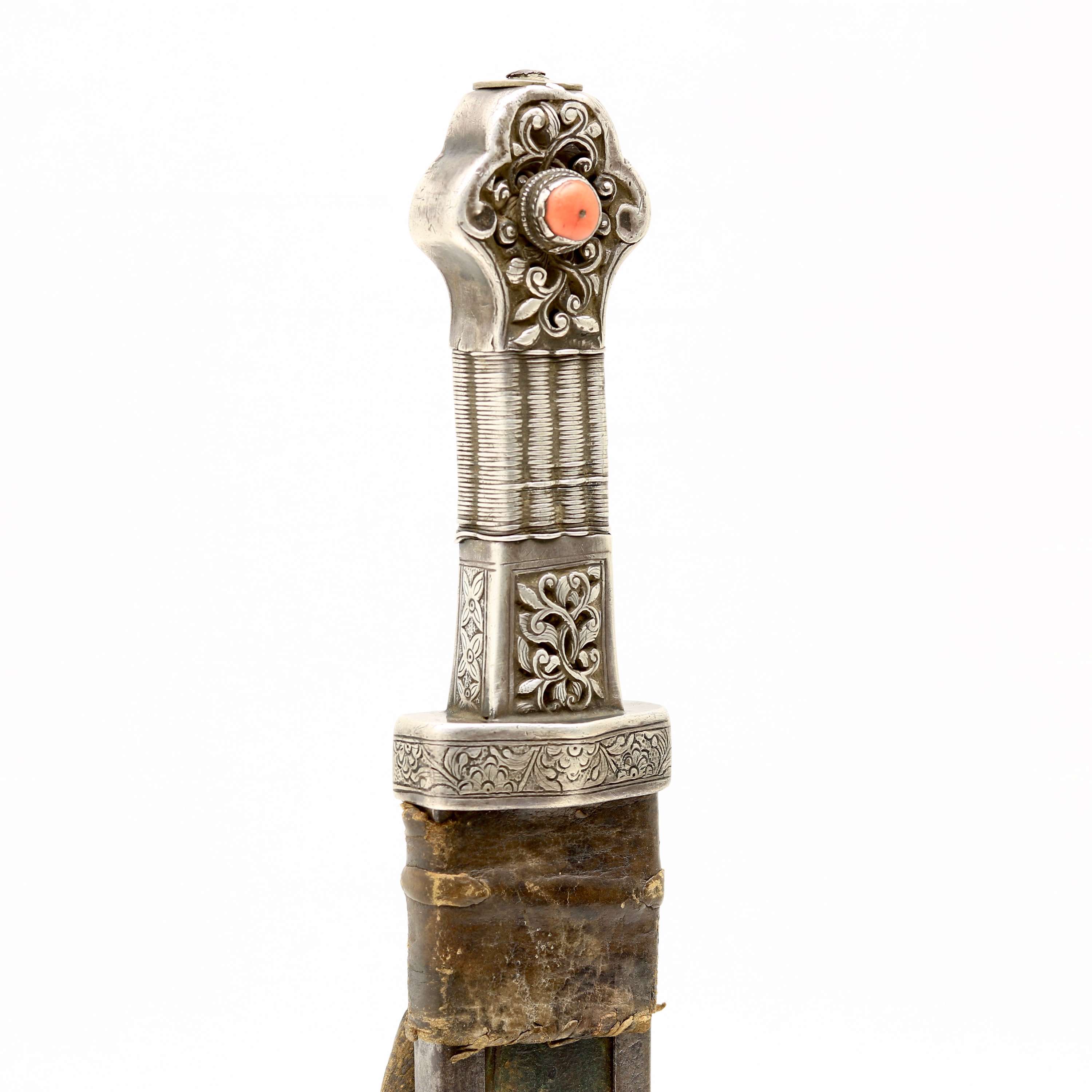 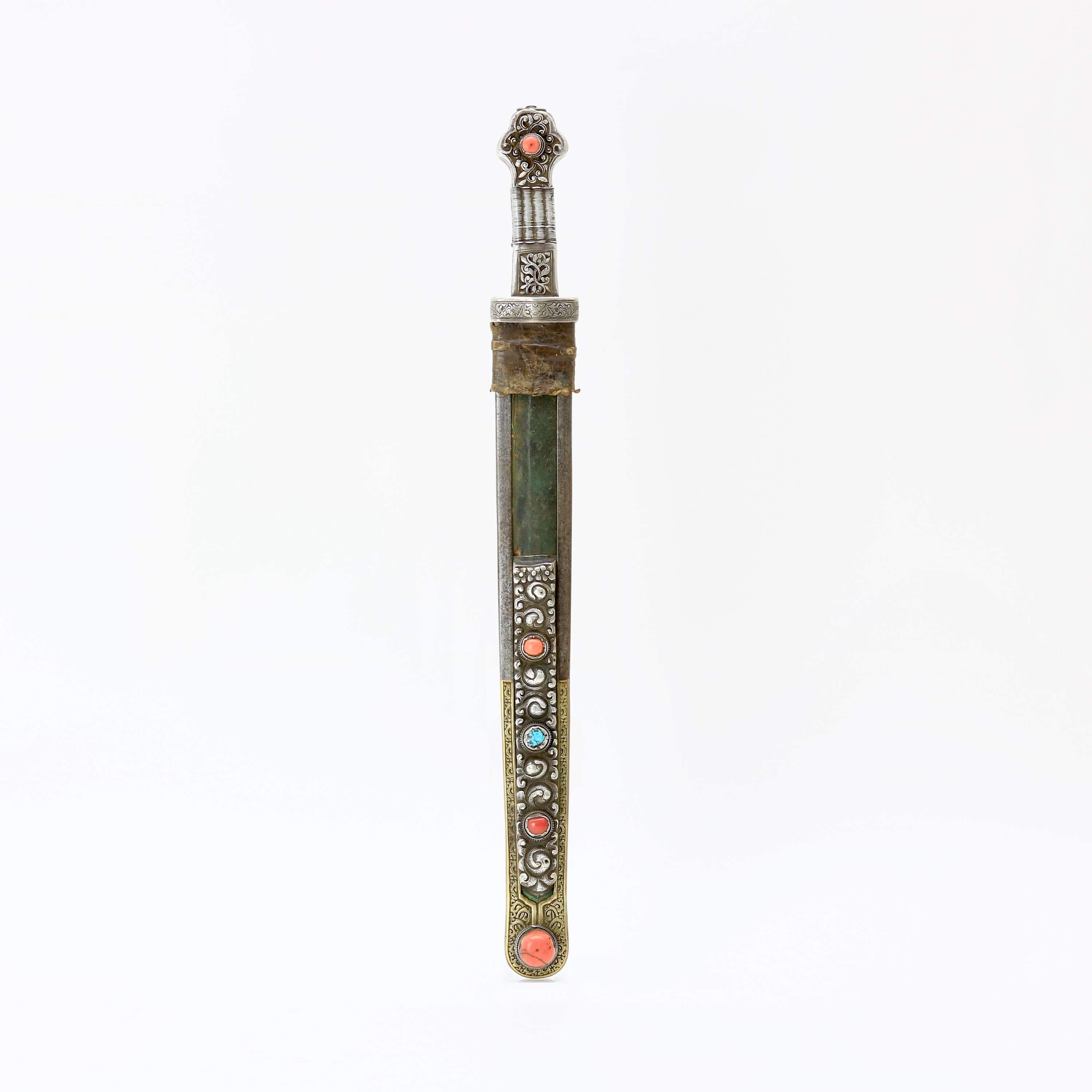 Collected by American anthropologist Melvyn Goldstein in the 1980s.