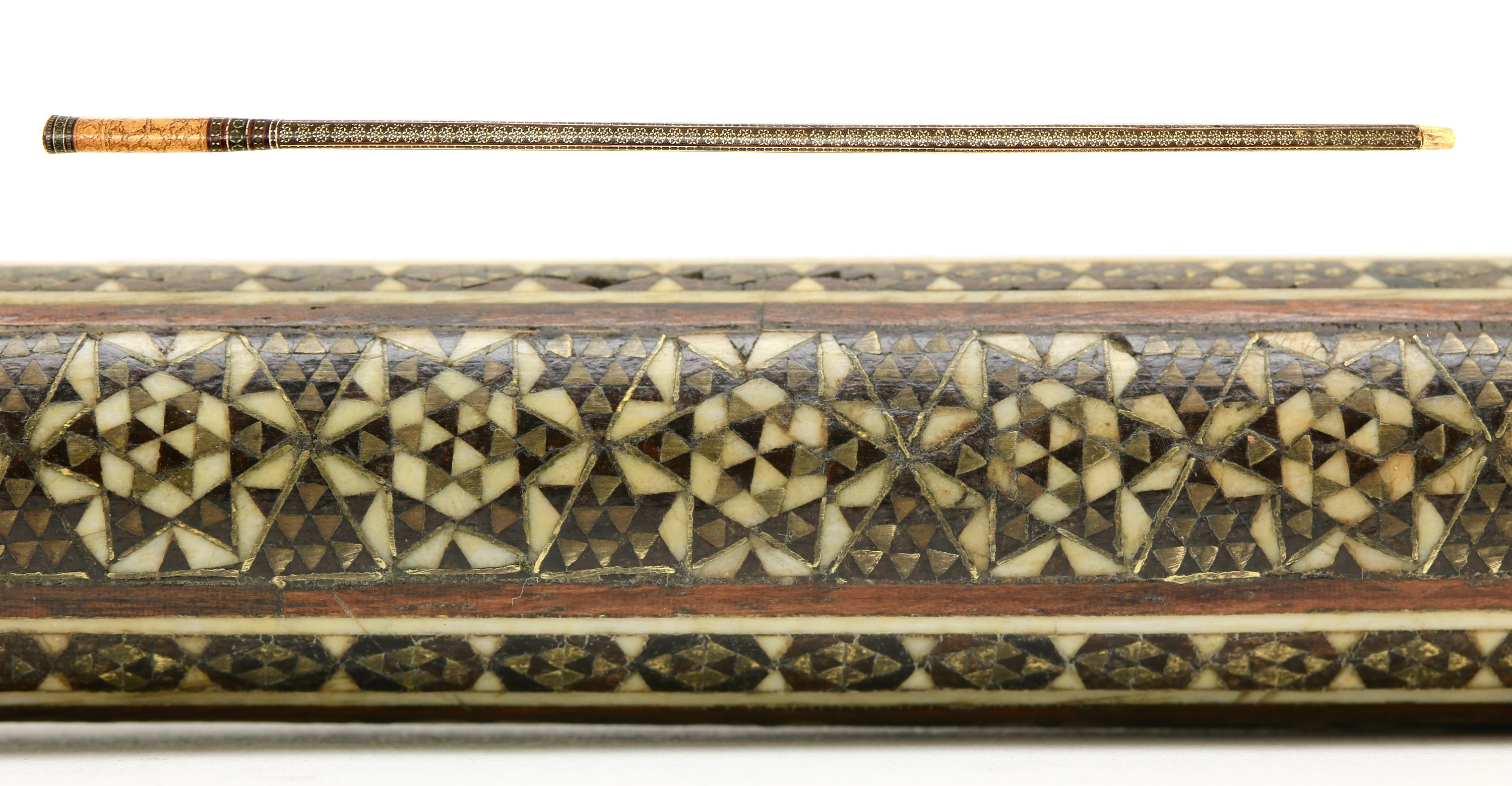 Sadeli is the Indian name of a type of marquetry that is primarily associated with the town of Surat on the coast of Gujarat. Sadeli is done by joining long strips of different materials and cross-sections into long rods, that are then cut into slices, each slice showing the rod's cross section. Materials used were often horn, bone, ivory, ebony, and various metals.

The technique originally came from Persia where it is called khātam, and was probably first introduced into Sadeli through Sindh. Indian craftsmen developed their own distinct forms from there. By 1903, the chief centers of its production also included Ahmedabad, Baroda and Bombay.1

Read more about sadeli in my glossary.

Notes to introduction
1. Sir George Watt; Indian Art at Delhi, 1903: Being the Official Catalogue of the Delhi Exhibition, 1902-1903. Published by the superintendent of government printing, Calcutta, India. Illustrations by Wiele & Klein of Madras. 1903. Pages 156-157.

An Indian cane covered almost entirely in sadeli work. Exceptions are the handle, which consists of a thick veneer of dense light hardwood that is carved in shallow relief in forms of traditional flower motifs.

The main cane is decorated with three wide bands of sadeli, separated by strips of bone, hardwood, and a row of sections of smaller cross-section rods.

The top knob exhibits exceptionally fine work, the finest I have seen executed in this technique.

The bottom is protected with a bone endpiece, attached by means of an iron screw. 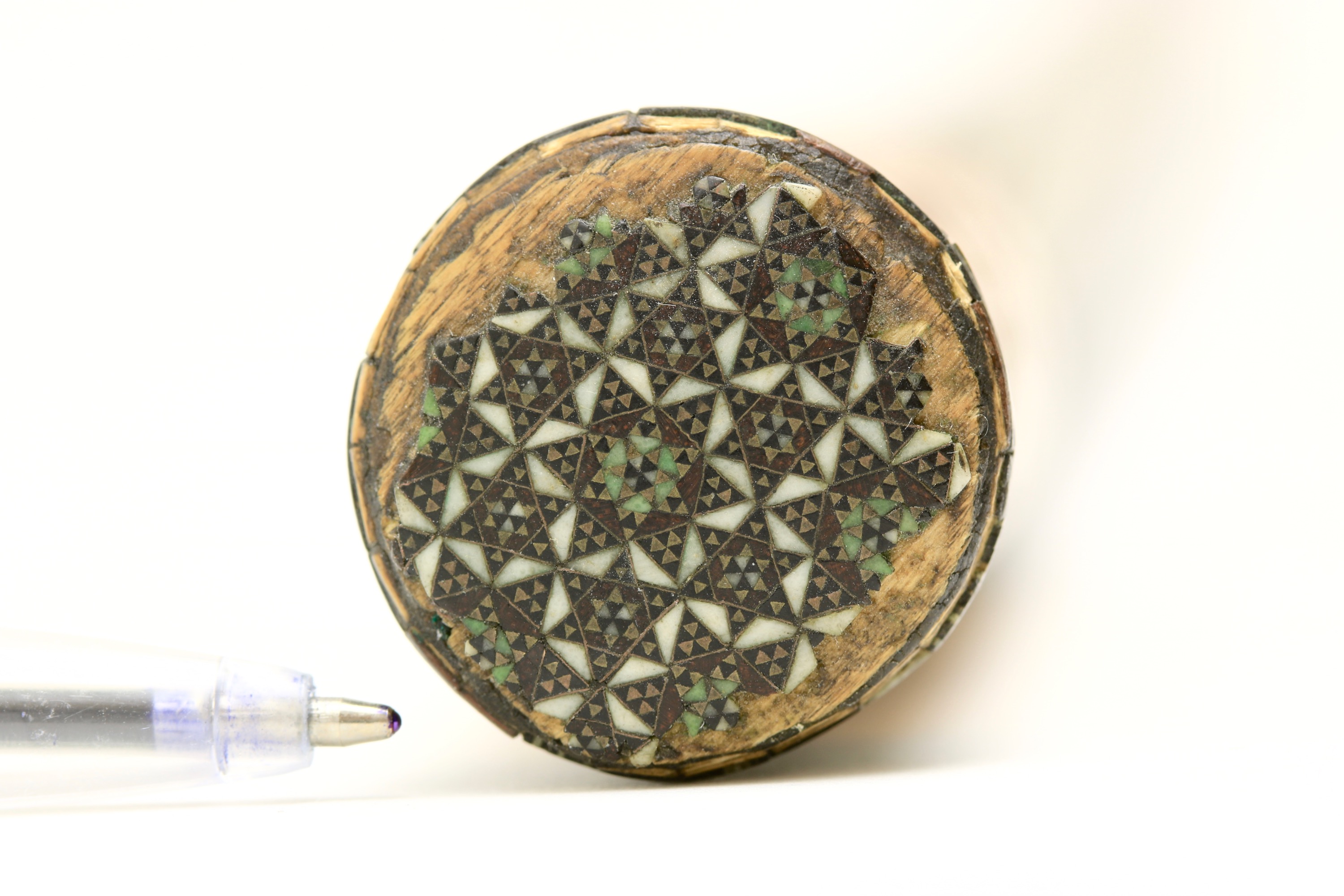 Top of the cane next to the tip of a ballpoint.
Sadeli work doesn't come much finer than this.

The overall form of the cane betrays strong European influence. The profile of the top resembles that of the so-called "pique cane" that was primarily popular in the 17th and 18th centuries. It stands to reason that this cane probably dates from that period, as there was not much of a market for them anymore by the end of the 18th century.

Also compare the work to that found on a writing box in the Metropolitan Museum in New York, accession number 2004.439, that is dated to the 16th - 17th century.

The cane suffered a number of losses during the coarse of its working life. Most notable losses are, unforutnately, at the edges of the fine work at the top. There are some other lesser losses here and there. Study the photos to get a good idea of the condition.

A rare Indian walking cane covered entirely in fine sadeli work. The top part is exceptionally fine, although unfortunately that is also where most of the losses occured. Nevertheless, this is an opportunity to obtain some of the finest work done in this technique, at a favorable price.

A nice study piece, or an ambitious project for the restorer. 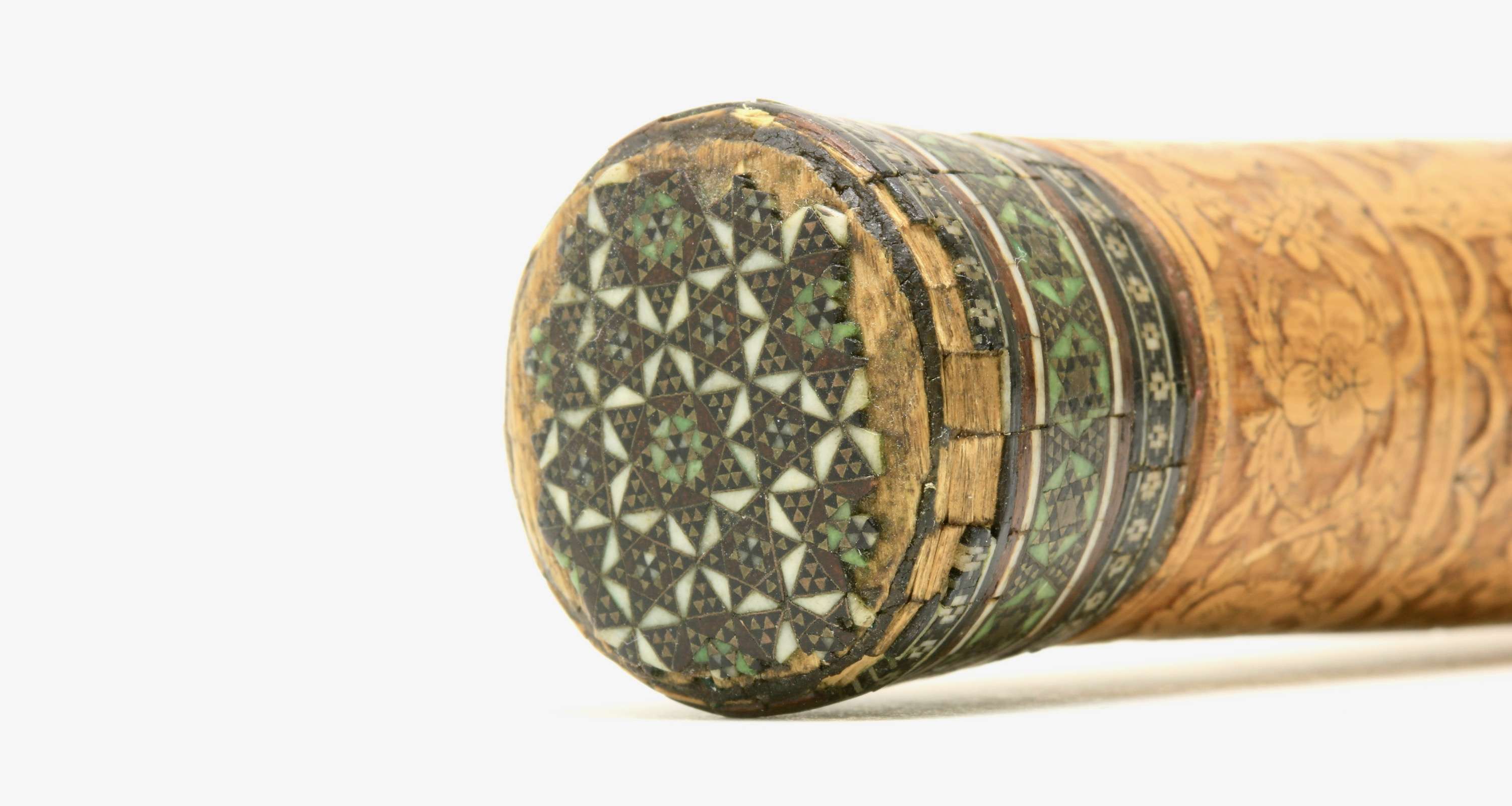 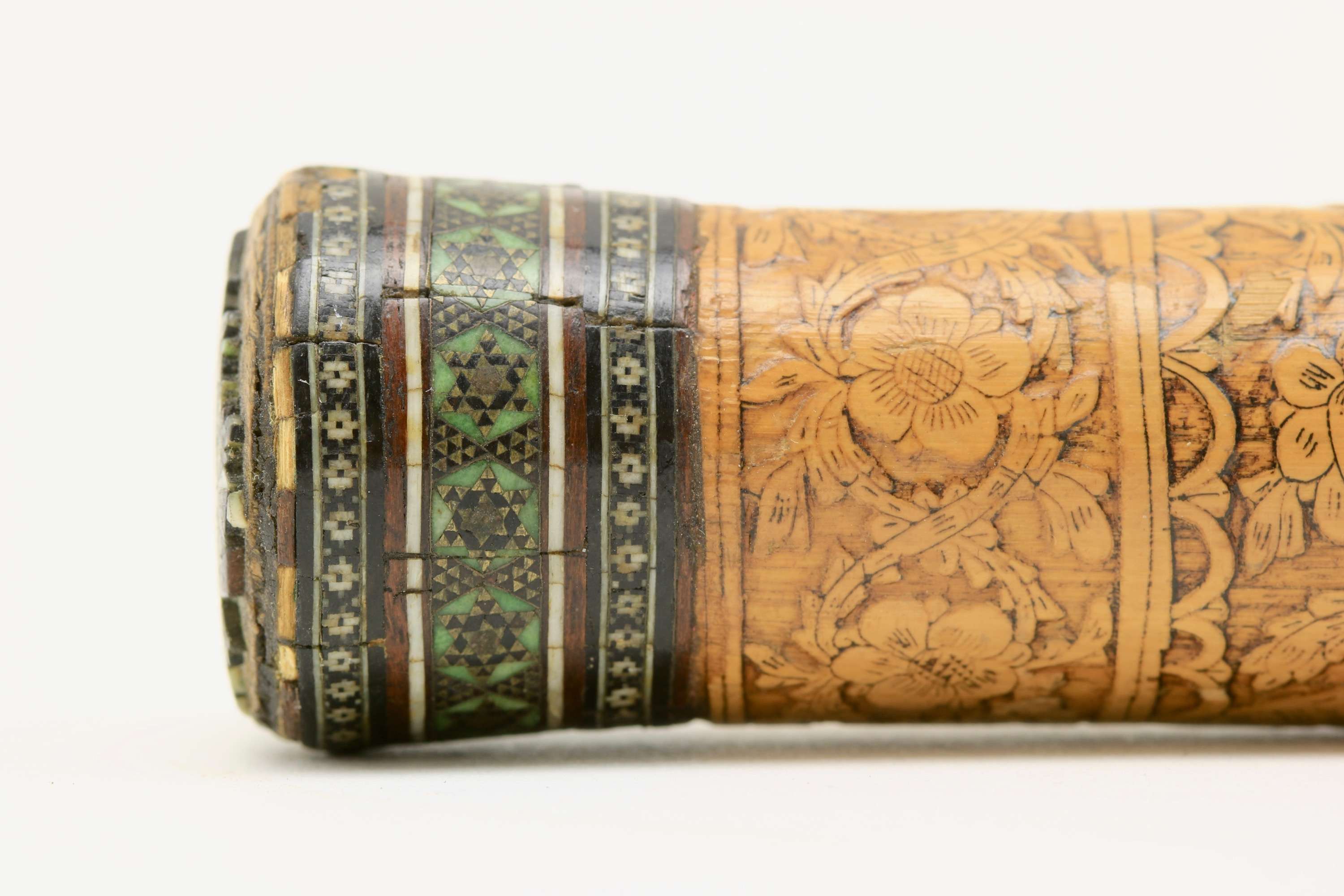 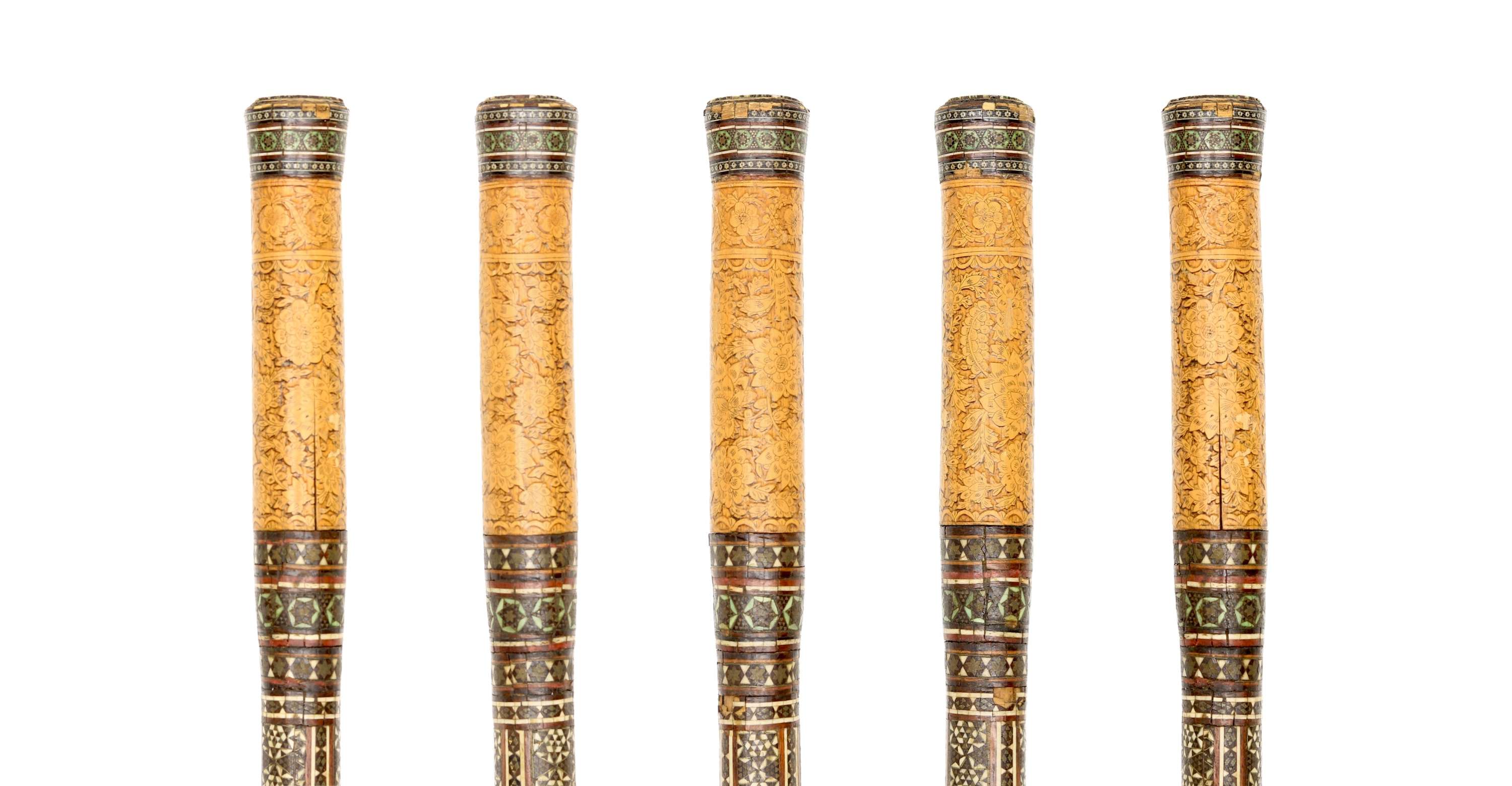 Weapons not for man, but for an unfortunate rooster. Retired, in a hardwood box.

Executed in gold and silver on a shakudō nanako base, with golden back.