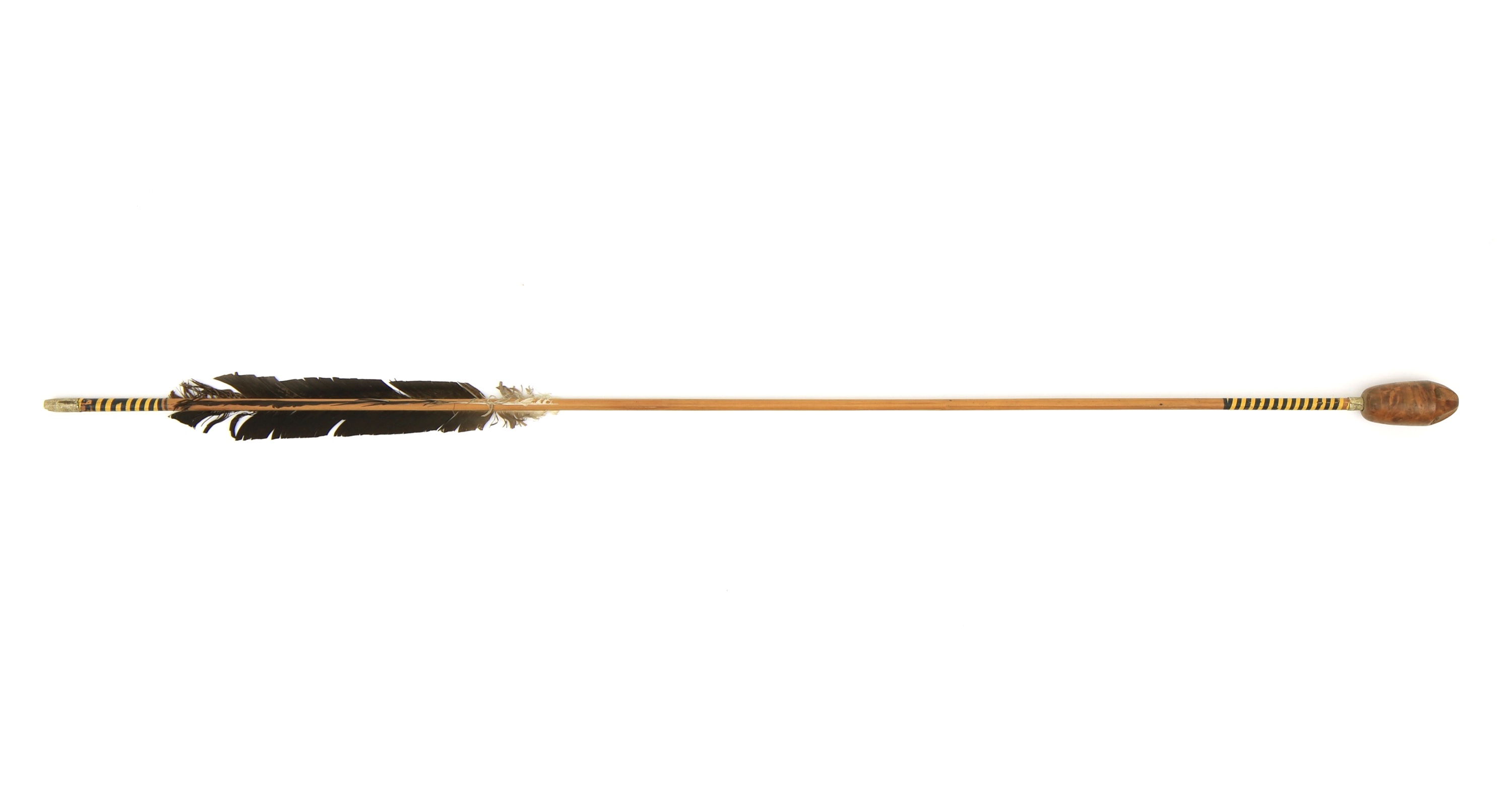 (Inside nock to base head)

Such arrows are often thought to have been used by commanders to let their troops know which direction to shoot at. And although such use is described in ancient Chinese texts, their use as such was rendered all but impossible by the rise of firearms.2 The deafening sound of musket volley-fire wasdescribed by Manchu soldier Dzengseo as the crackling sound of frying beans.3 Such noise would make it impossible to hear a feeble flying whistle.

They could still be used for signaling, just not in the heat of battle, and so certain guards and vanguard units would still carry them. Looking at Qing records, countless varieties were still made in the 18th century, but almost all are described as being for hunting and/or sports. The shriek of the whistle made the animal behave in a predictable manner, usually startling it, making it easier to hit. Blunt whistles were used for shooting pelt animals and keeping their pelts intact, while sharp ones took out other animals.4

In sports, the whistle would add spectacle to the event. Whistling blunts would be used to shoot the special Manchu and Mongol tunken target.5

Chinese archery after the Qing dynasty
China's long-enduring archery tradition finally came to a near-complete halt when in 1908 the military archery exam was scrapped in favor of more modern weapons and tactics. The dynasty fell in early 1912 and bowyers and fletchers were initially struggling to survive now the bulk of their clientele was gone.

The 1930s saw a renewed interest in archery as a sport, with attempts at a revival by small clubs in cities including Beijing and Chengdu. This revival was short-lived because interest shifted from Asian archery into the more widely practiced Olympic style archery that largely followed the teachings of Horace Ford. The final blow was dealt in the late 1960s, when the Cultural Revolution sought to rid Chinese culture of tradition and all lineages of old craftsmen were halted.6

Notes to introduction
1. For further reading, see my article at www.manchuarchery.org: Whistling arrows and whistle arrows.
2. Sima Qian; Records of the Grand Historian. Finished circa 94 B.C.
3. Nicola Di Cosmo; The Diary of a Manchu Soldier in Seventeenth-Century China: "My Service in the Army", by Dzengseo, Routledge Studies in the Early History of Asia. 2006.
4. Yun Lu (允祿), et al, editors; Huangchao liqi tushi (皇朝禮器圖式) or "Illustrated Ceremonial Paraphernalia for our Dynasty", 1766 woodblock print edition, based on a 1759 manuscript. Chapter 14.
5. See my article about this target at www.manchuarchery.org: The five-tiered-target.
6. Tan Danjiong's (T'an Tan-Chiung) "Investigative Report on Bow and Arrow Manufacture in Chengdu" published in Academia Sinica Language and History Review, Taipei, 1951, an English version was published by the Society of Archer-Antiquaries in 1984. An interview with Wu Yonghua by Stephen Selby is published online at ATARN.ORG.

A nice example of a Republican revival period whistle arrow, called bàojiàn (骲箭) in Chinese. The relatively large whistle head is made of a single piece of beautiful orange-brown burl wood. It is drilled with four whistle holes, chuān (穿), and an equal number of ridges, qǐ léng (起棱).

The shaft is made out of liùdào mù (六道木), scientific name: Abelia biflora Turcz. It is a shrub native to northeartern China that creates distinctive branches that are divided into sections with six grooves in them, each section alternating the position of the grooves. When I visited the Ju Yuan Hao shop on 2005, liùdào mù (六道木) was still harvested in Manchuria and cut to arrowshafts by Yang Fuxi. It is a strong and relatively heavy wood.

Fletched with large brown feathers with some light fading near the front. Both ends of the shaft are reinforced with pale green ray-skin. The shaft is further decorated, front and back, with distinct spiral wrapping in black and yellow; a very common color combination on Republican era arrows. 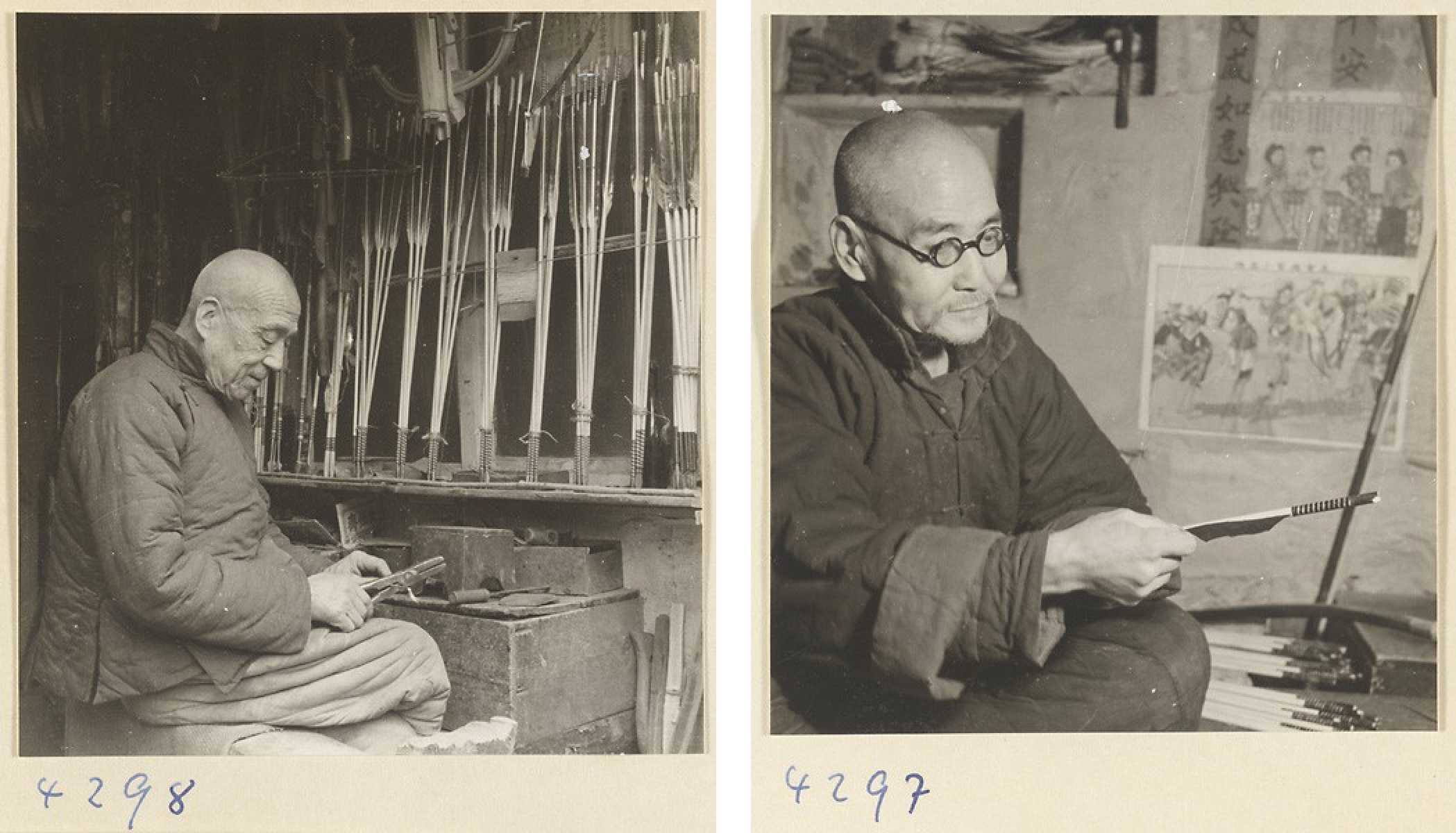 Arrow making in Beijing. Photos by Hedda Hammer Morrison (1908-1991) who was a resident of Beijing from 1933 to 1946.
Photos were digitized by the Harvard-Yenching Library. For the complete set, see www.manchuarchery.org.

The arrow was probably used for shooting the "five tiered target" called gǔ (鵠) in Chinese, and tunken in Manchu. Such arrows were thus referred to as shègǔ bàojiàn (射鵠骲箭) in Chinese, literally "shooting the gu target blunt arrow" or simply tunken yoro in Manchu.

Antique Chinese whistle arrows are pretty rare on the market. It's nice to see a revival period piece that is still largely made like the earlier pieces that date from the Qing dynasty. 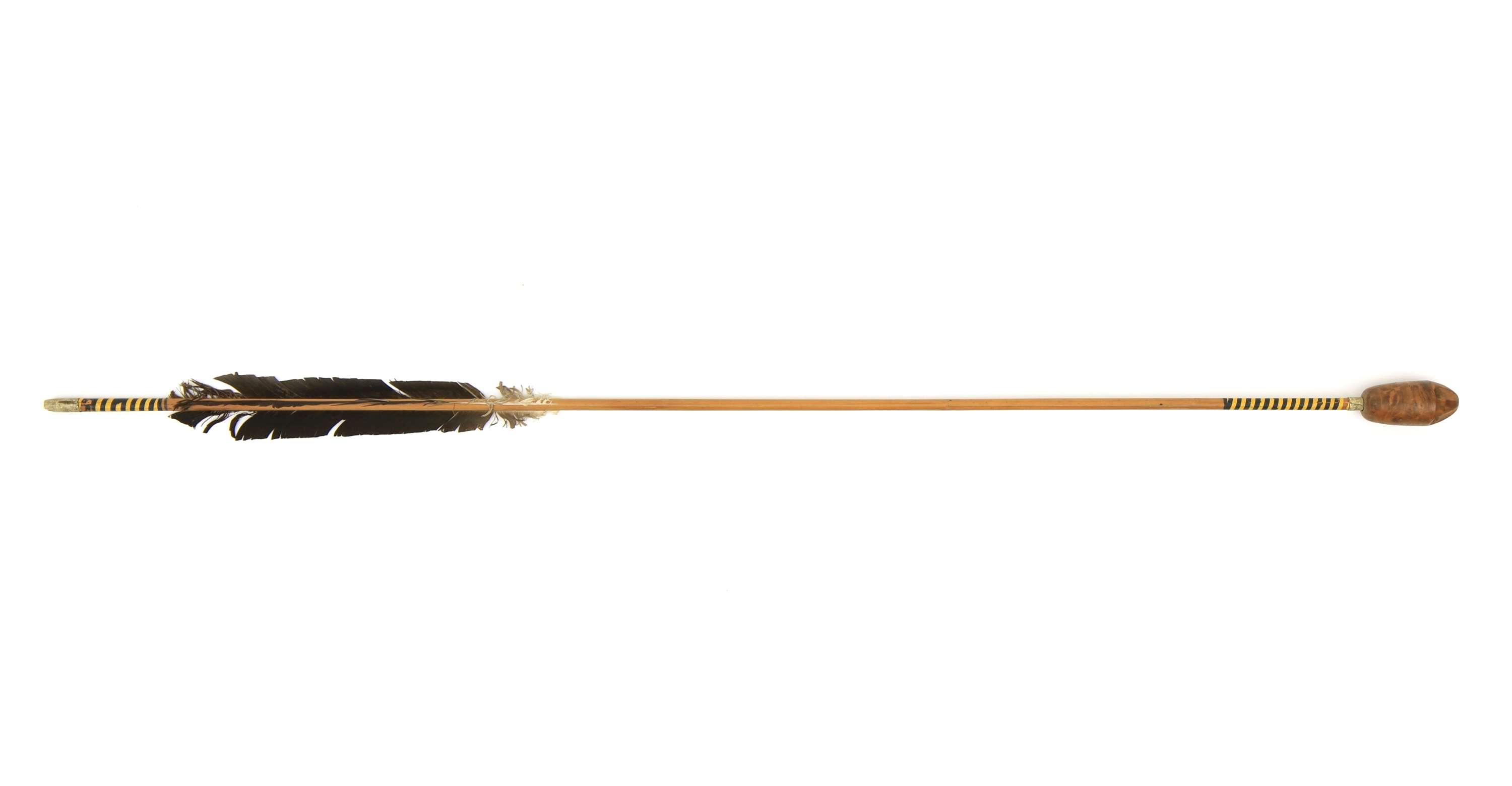