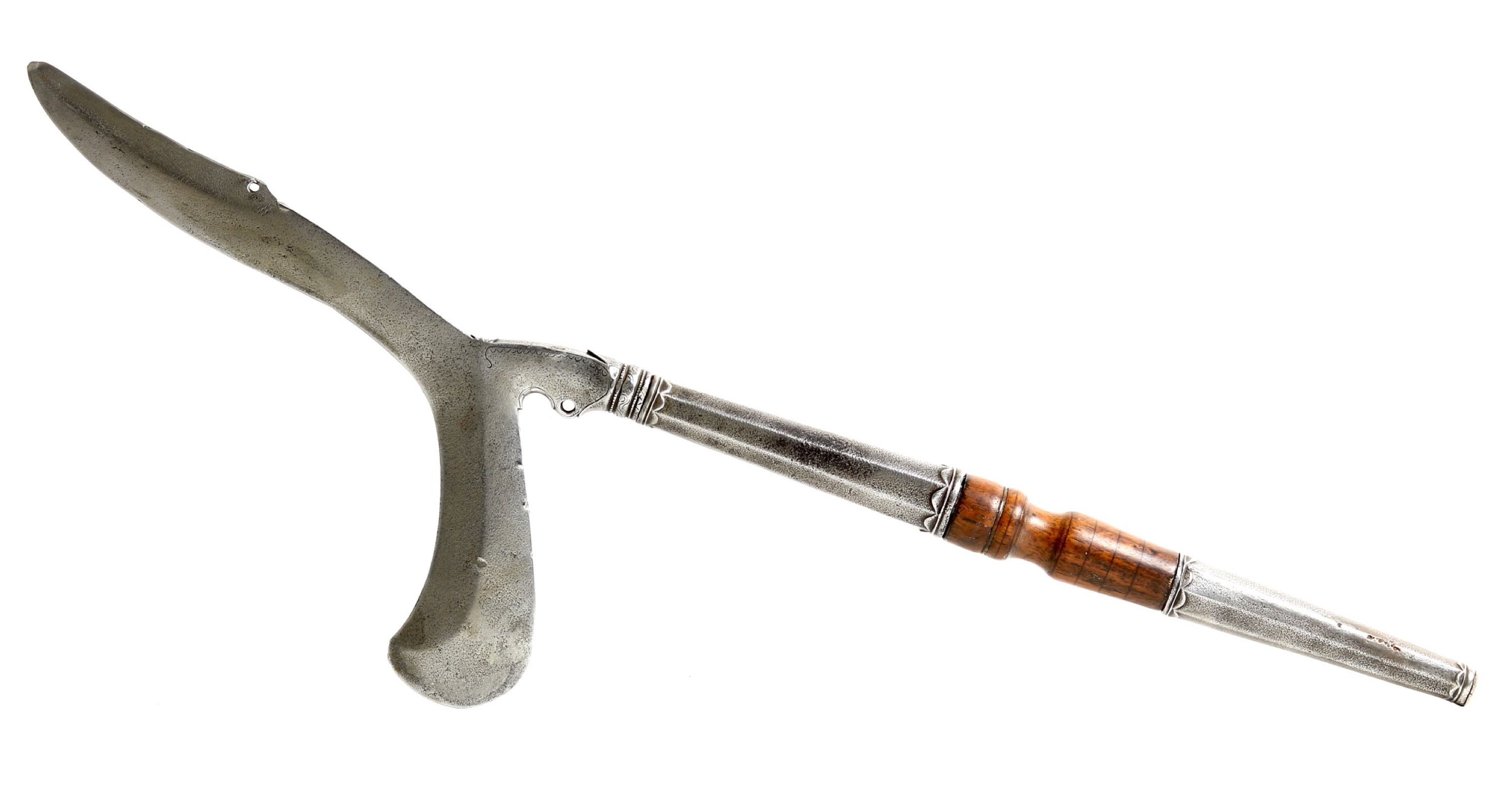 One of the most obscure of Indonesian arms, it is described in Stone as kudi tranchang but a more accurate transliteration is kudi trantang.

It comes in a very wide variety of shapes, one illustrated by Rouffaer and later re-published by Stone that is much like ours here was stated by both sources to come from Madura.1

"The kadi-tranchang is a weapon which was formerly general on Java, but not now much used." 2

Dutch sources also attribute the weapon mainly to West Java but also mention use in Madura where it was called kodhiq.3

Snouck Hurgronje, writing in 1904 mentions that these weapons were mostly in use among the Sundanese of West Java who call it koedjang, (kujang) and the Javanese and the Madurese. It has been in use since at least the 14th century but by the time he researched the weapon, around 1900, it had long fallen out of use and only stories could be recorded. It was said that it was initially a fighting weapon, but in the later period of its use often carried solely as a talisman and that waving it around would ward off ferocious animals like tigers.4 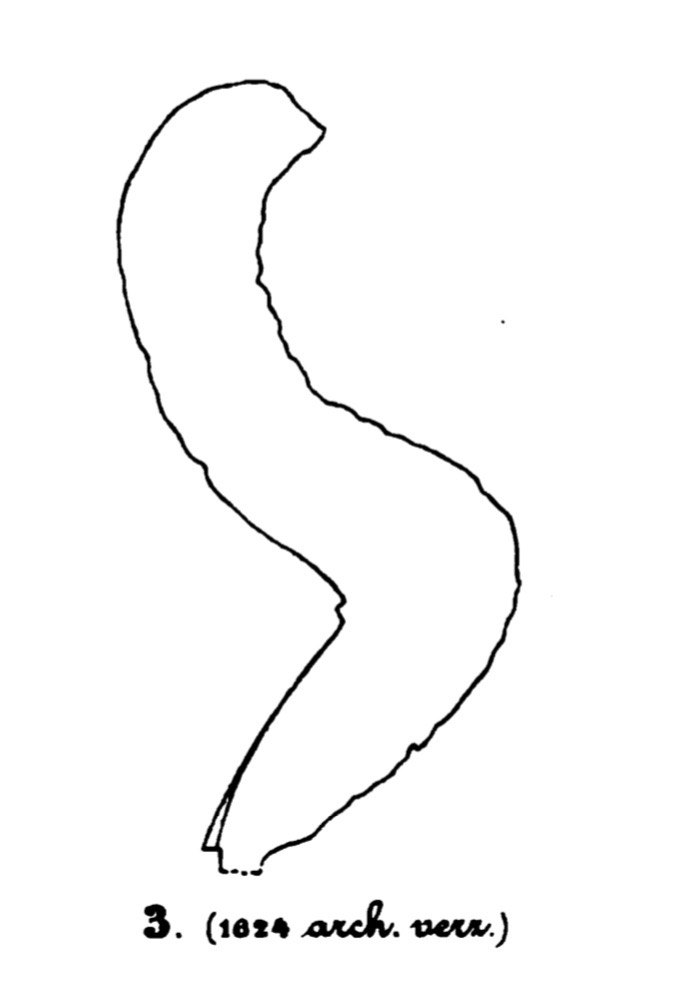 A simple variation of it, called kudi bares, remained in use as a farming tool in the more remote areas of Java and Madura until at least the early 20th century.5

Our example is of a rarer, ax-like variety with a long haft. The head is made of forge folded iron, its laminations only vaguele visible in current condition. It consists of a forward projecting knife tip that is half double-edged with a raised backedge. From the base of the leading edge emerges an ax-shaped blade with a rounded edge. The back of the blade is nicely engraved with vegetal motifs.

The tip is tanged and securely seated in a turned hardwood haft with a waisted center. The haft in turn has an upper iron sleeve and lower buttpiece, both octagonal in cross-section.

The whole is nicely made, with attention to detail in the execution of each part.

The typical example is quite elongated, without the strong ax-shaped projection. I have been able to find only two that match this one fairly closely. One published in Stone, as cited above. 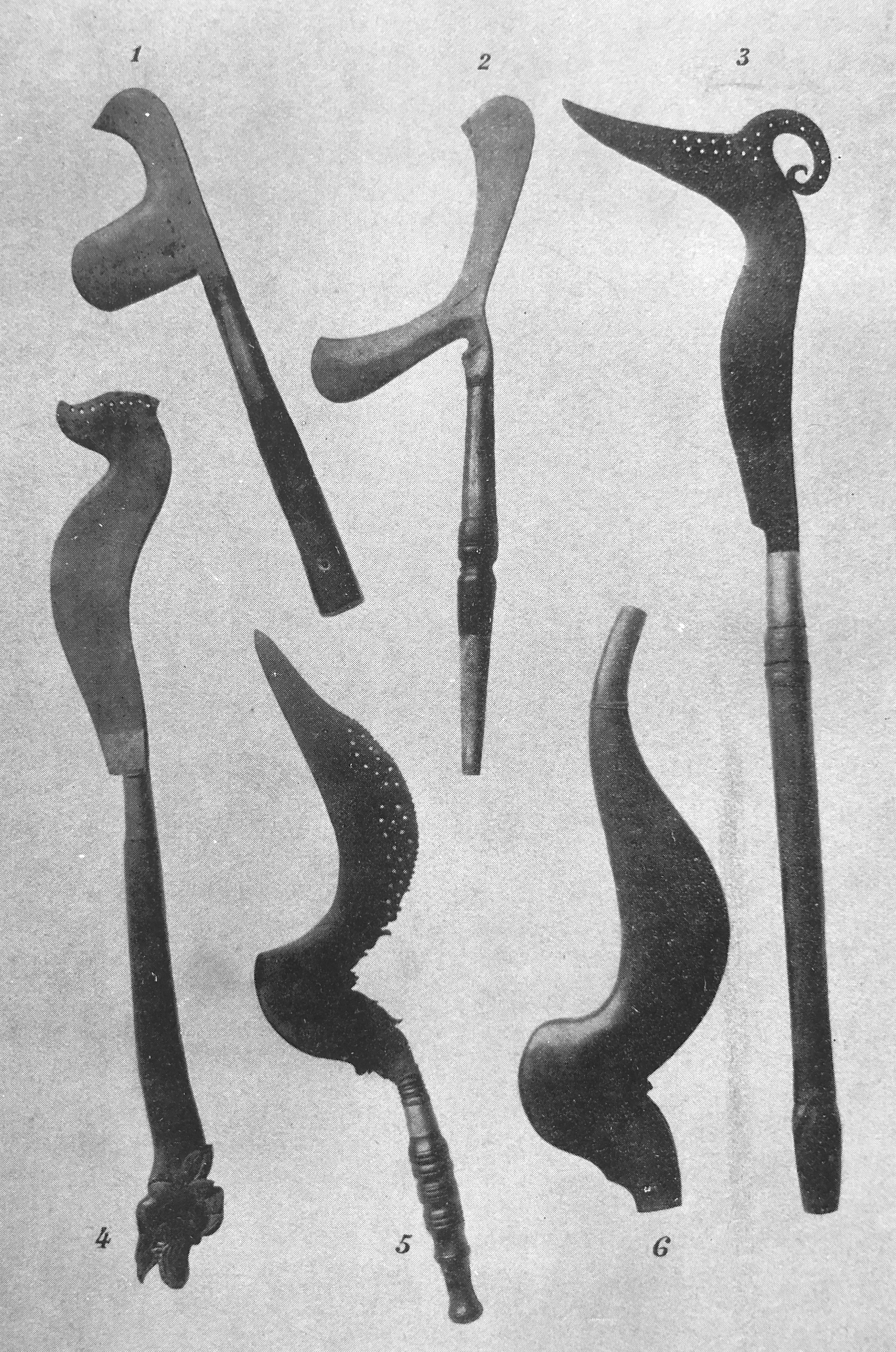 A number of kudi and kudi tranchang as illustrated by Rouffaer in 1909. Later again by Stone in 1934.
5 is the most typical shape. 2 is closest to ours, said to be from Madura.

The other is held in the Dutch Ethnographic Museum in Leiden under accession number 370-48. The museum provides no explanation or provenance other than that it is labeled Javanese.

Light pitting on all metal surfaces. Edges are blunt, and there are some dents here and there.

A very rare variety of an already very rare Indonesian weapon. By the time most ethnographers found out about them, they had long fallen out of use and only stories remained. 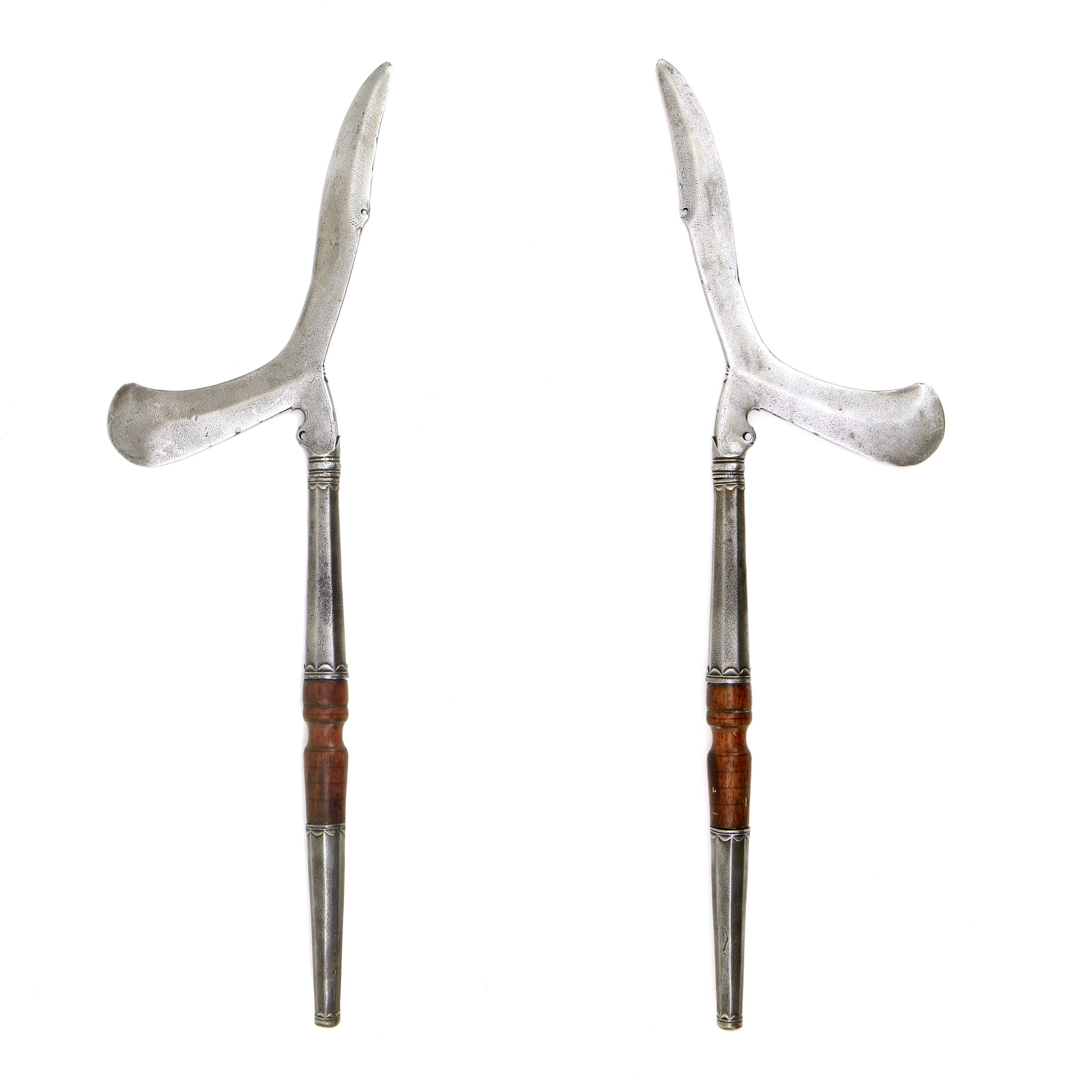 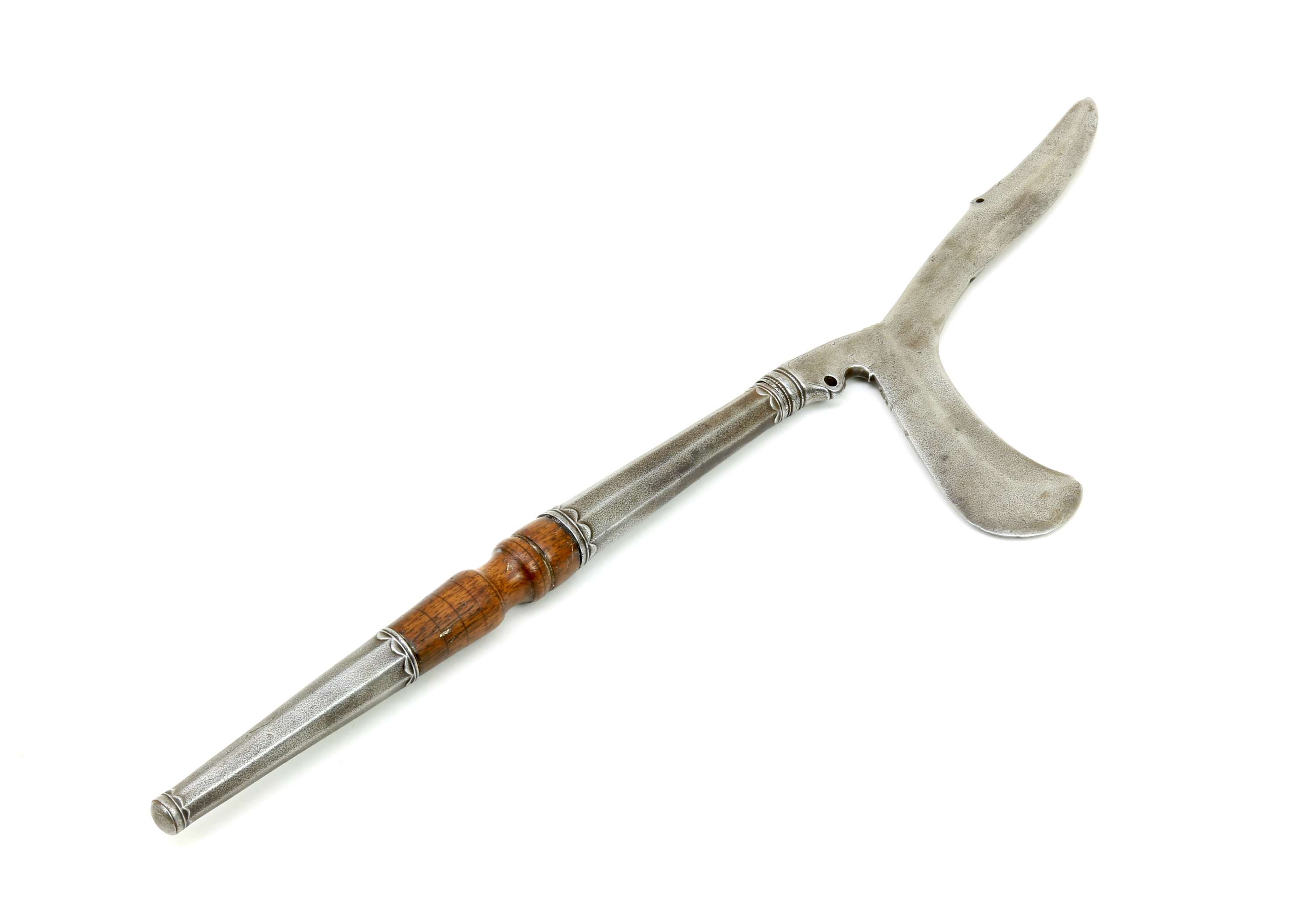 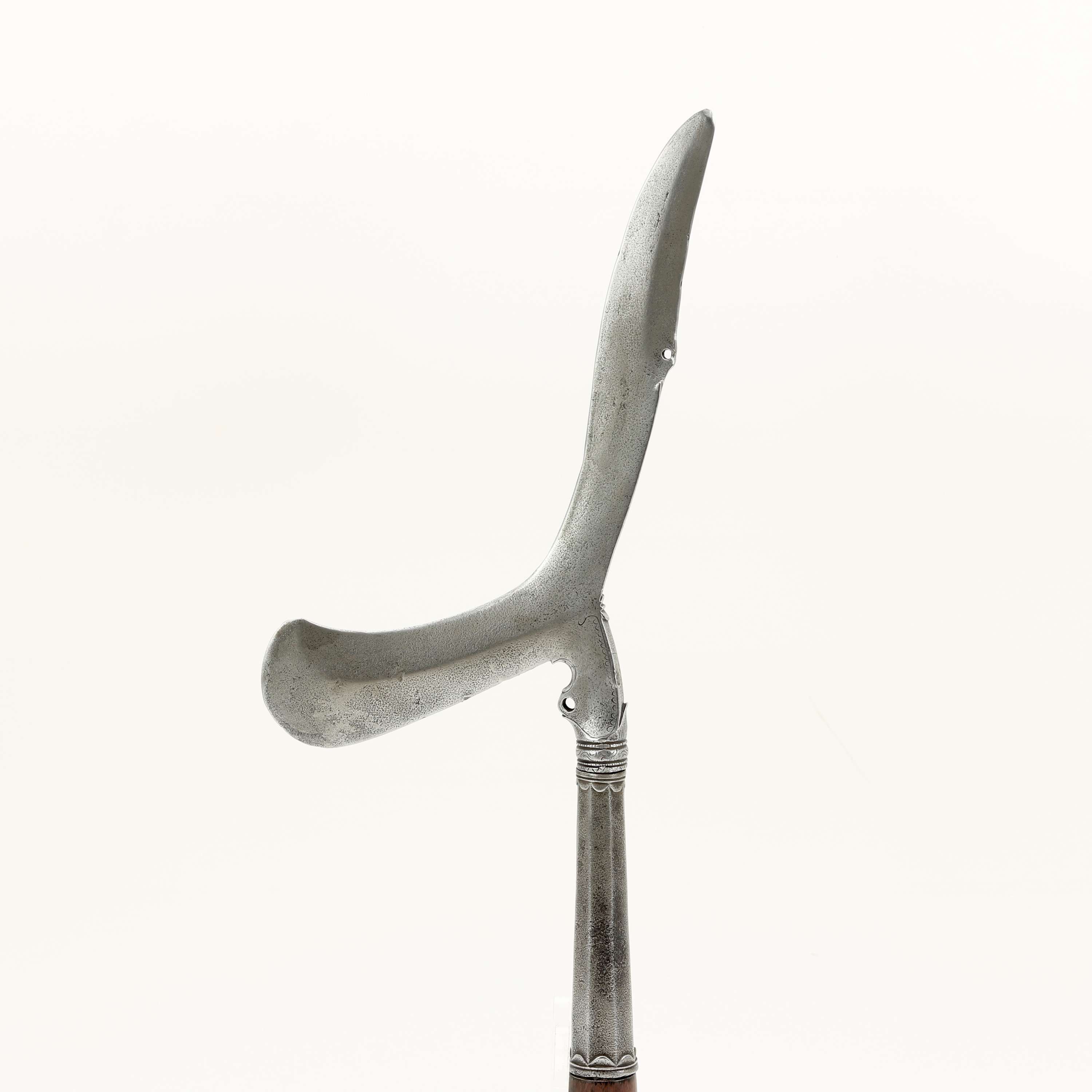 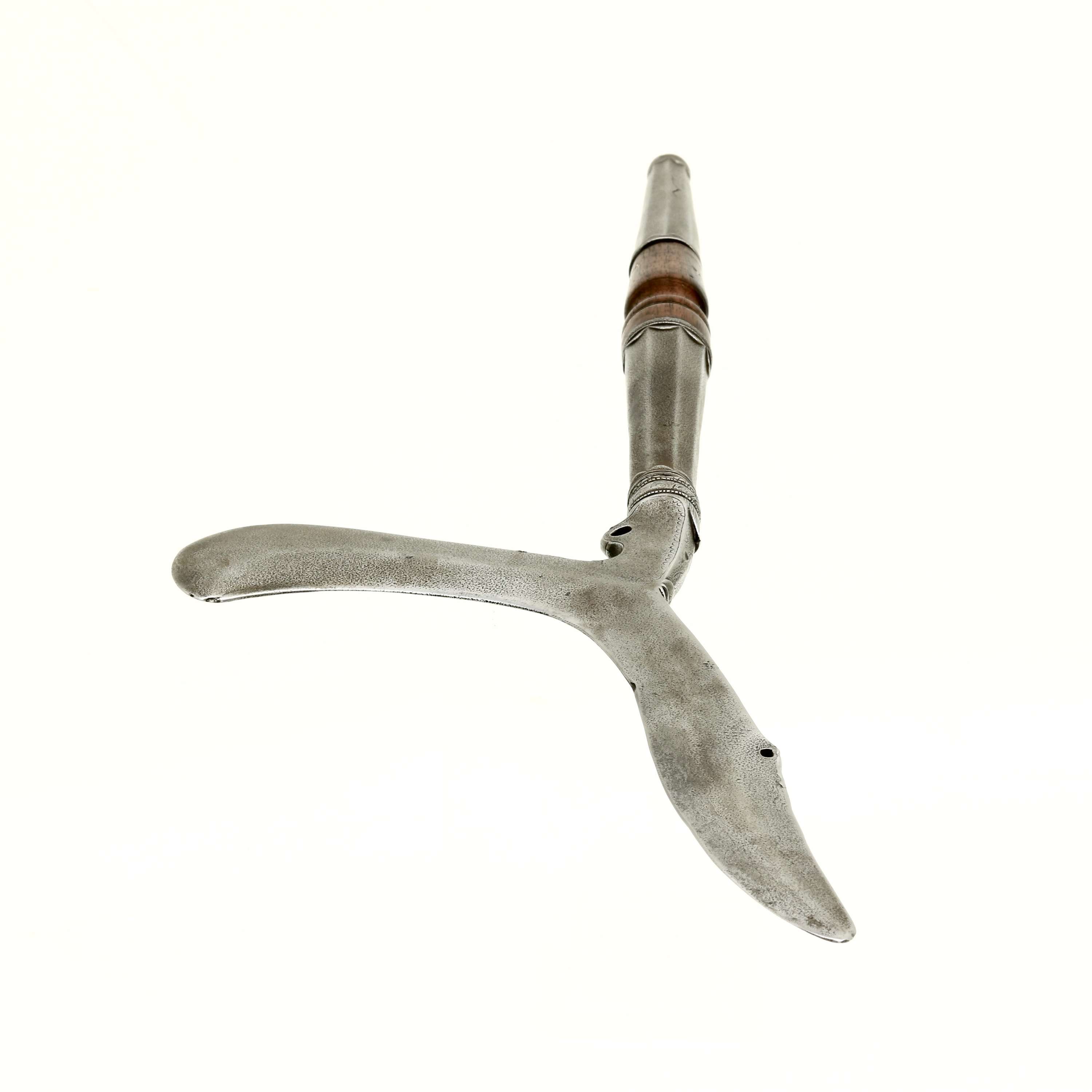