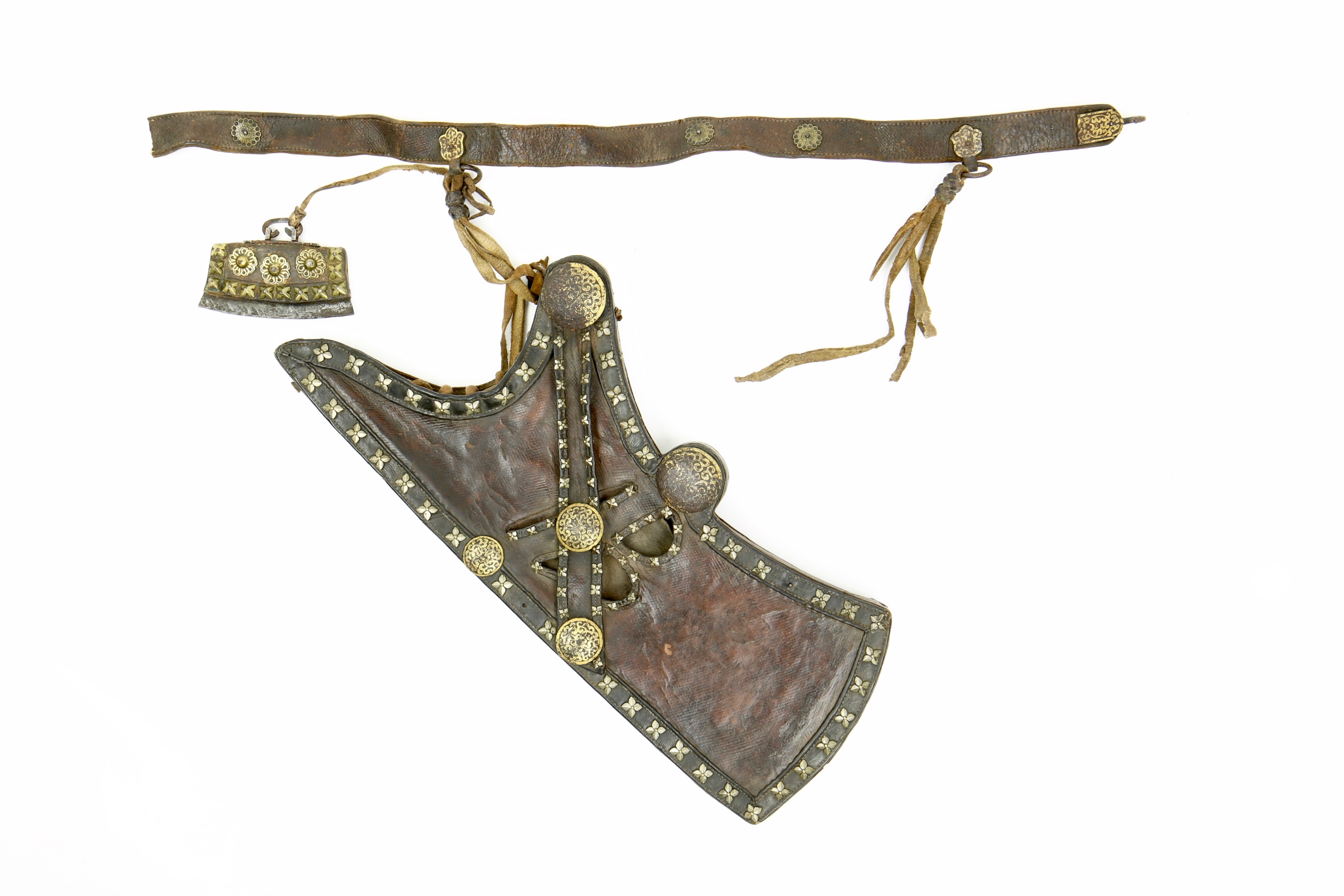 Some time ago I sold a rather remarkable sword that was closely associated with local kings in the Jinchuan region of Western Sichuan province. That sword was recently auctioned by a new owner in China for 3.5 million RMB, which at the time of writing (August 2019) is the equivalent of $495.000 or €445.165.

I have now found a quiver with iron mounts that are an exact match to the style and execution of the ironwork of that sword. 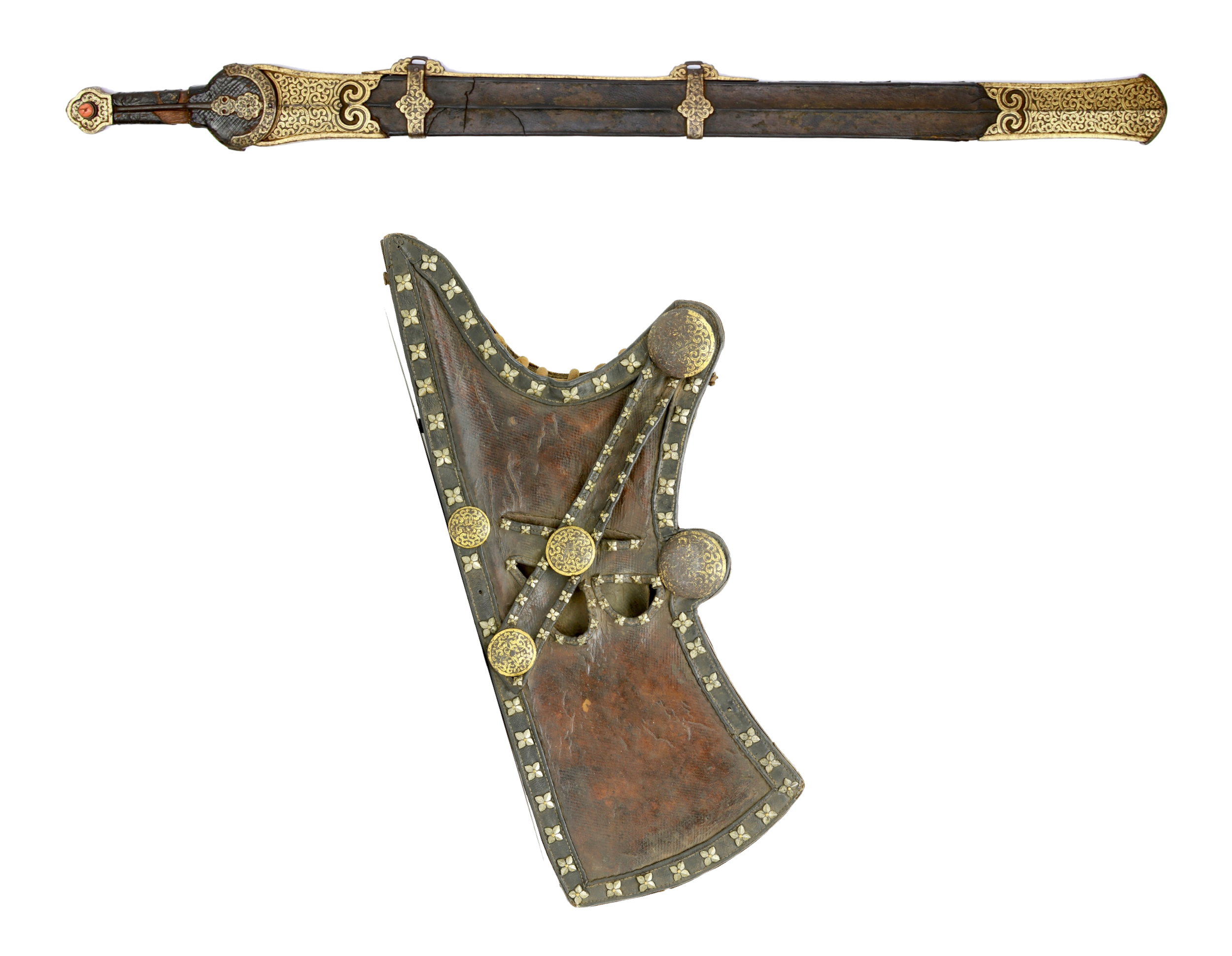 Top: The Jinchuan sword. Sold by Mandarin Mansion in 2017.
Bottom: This quiver, depicted to scale. 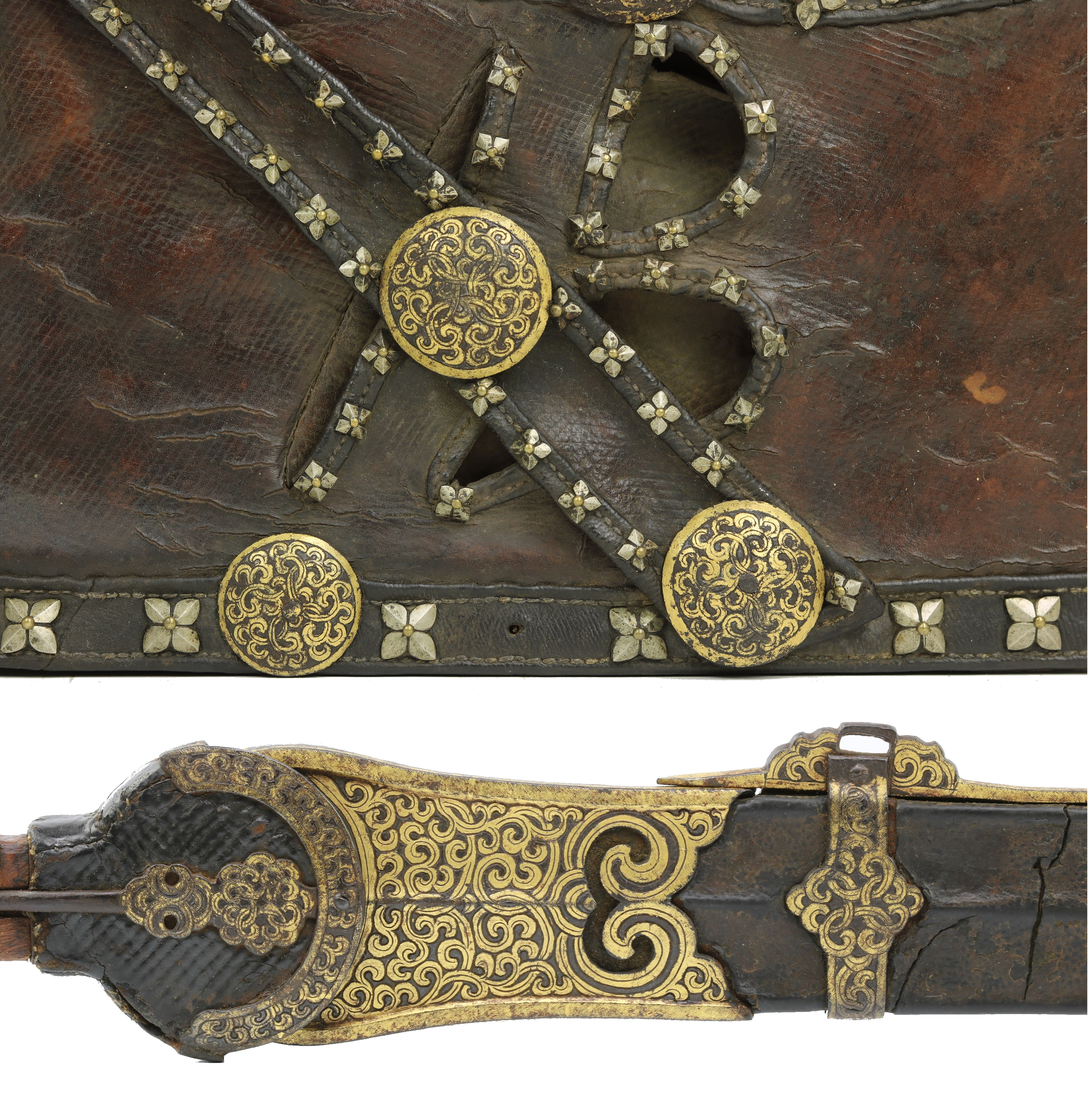 This quiver (top) compared to the Jinchuan sword.
Notice the similarities in the metalwork, as well as in the color and texture of the leather. 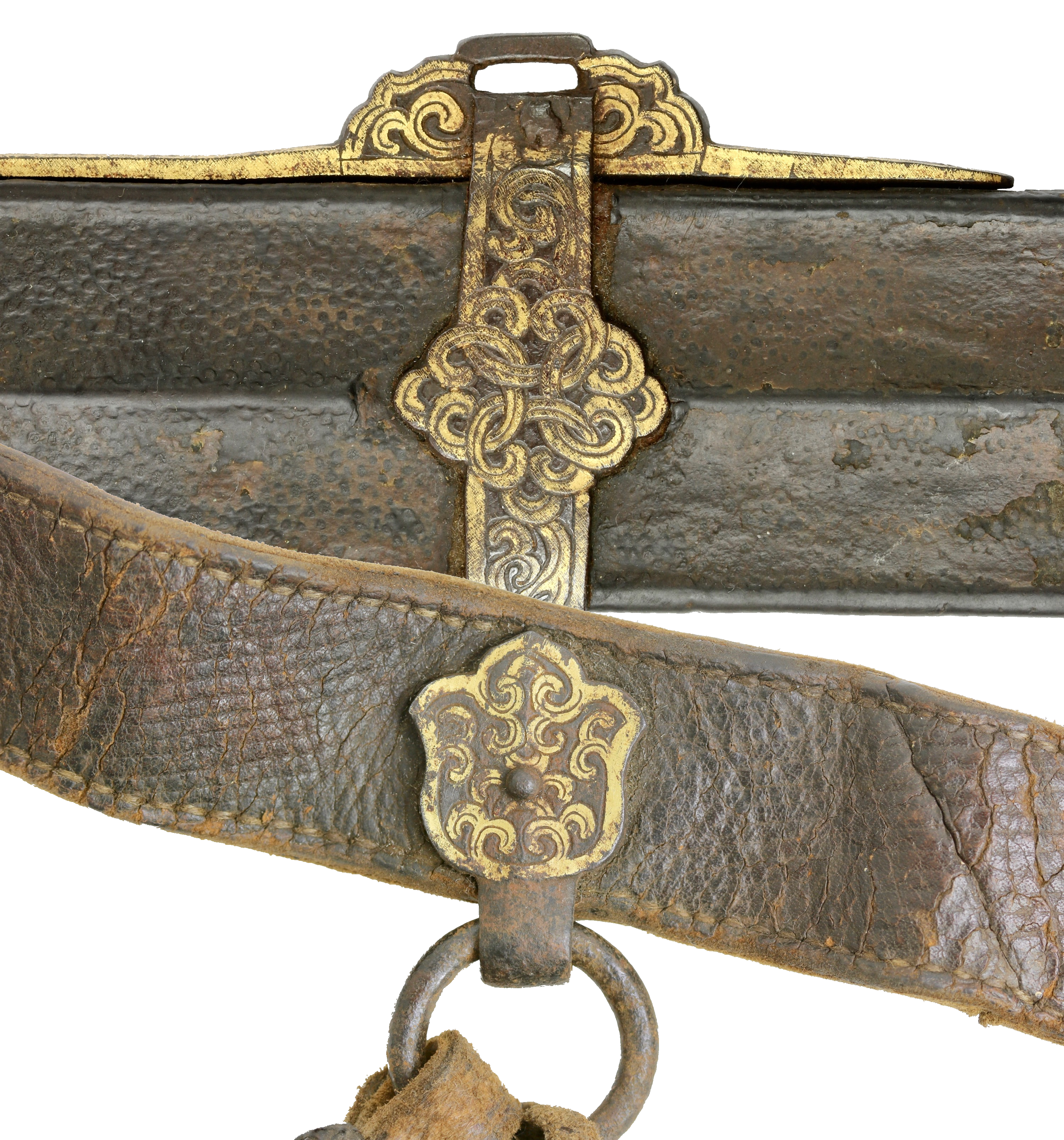 Scabbard mount of the Jinchuan sword (top) compared to a belt mount of this set (bottom).

Built around a wooden frame that is reinforced with an iron frame nailed to the back. Front and back are covered with dark brown leather with a fine grid structure pressed into the leather.

Its design closely follows that of Tibetan quivers; elongated and with two straps crossing in the front, under which are two pockets for extra arrows. Inside the quiver's opening is a thick cord that serves as arrow spacers.

The entire outline of the quiver is studded with silver ornaments resembling stylized flowers with four petals. The borders of the cross-straps and extra pockets are similarly studded with smaller versions of these ornaments. Five iron domed bosses are laid out along the cross, one in each corner and one in the center where the two straps pass over one another. All are damascened in gold with scrollwork that is typical for the Jinchuan region.1

The back of the quiver retains a strap for counterbalancing the quiver, exhibiting a system that is close to that found on Islamic quivers of similar type. While generally Tibetan in design, this quiver is considerably larger than the average Tibetan quiver.

The quiver comes attached to its original belt, along with a huǒliénbāo (火䥥包) or "flint striker pouch". The belt comes with a belt hook and suspension mounts in iron and gold that match the iron bosses on the quiver. The flint pouch has brass studs in the same shape as the silver the studs on the quiver.

Two silver studs are missing, and part of the belt is missing. Significant losses to the gold on two of the bosses. Some missing suspension straps. The rest is in good condition, the leather is still soft and flexible.

There is a very similar quiver in the Royal Armories in Leeds which reputedly came from an old Scandinavian collection, and is thought to date from the 17th or 18th century. Accession number: XXVIB.188

A rare type of quiver with a type of leather and golden damascened decoration that connects it to a small group of Jinchuan royal swords. It would make a matching set with a Jinchuan sword we sold some time ago, that recently auctioned in Beijing for a substantial amount.

The type of goldwork seems closely connected to the Tusi of Jinchuan, hereditary royalty that ruled over kingdoms in the area. 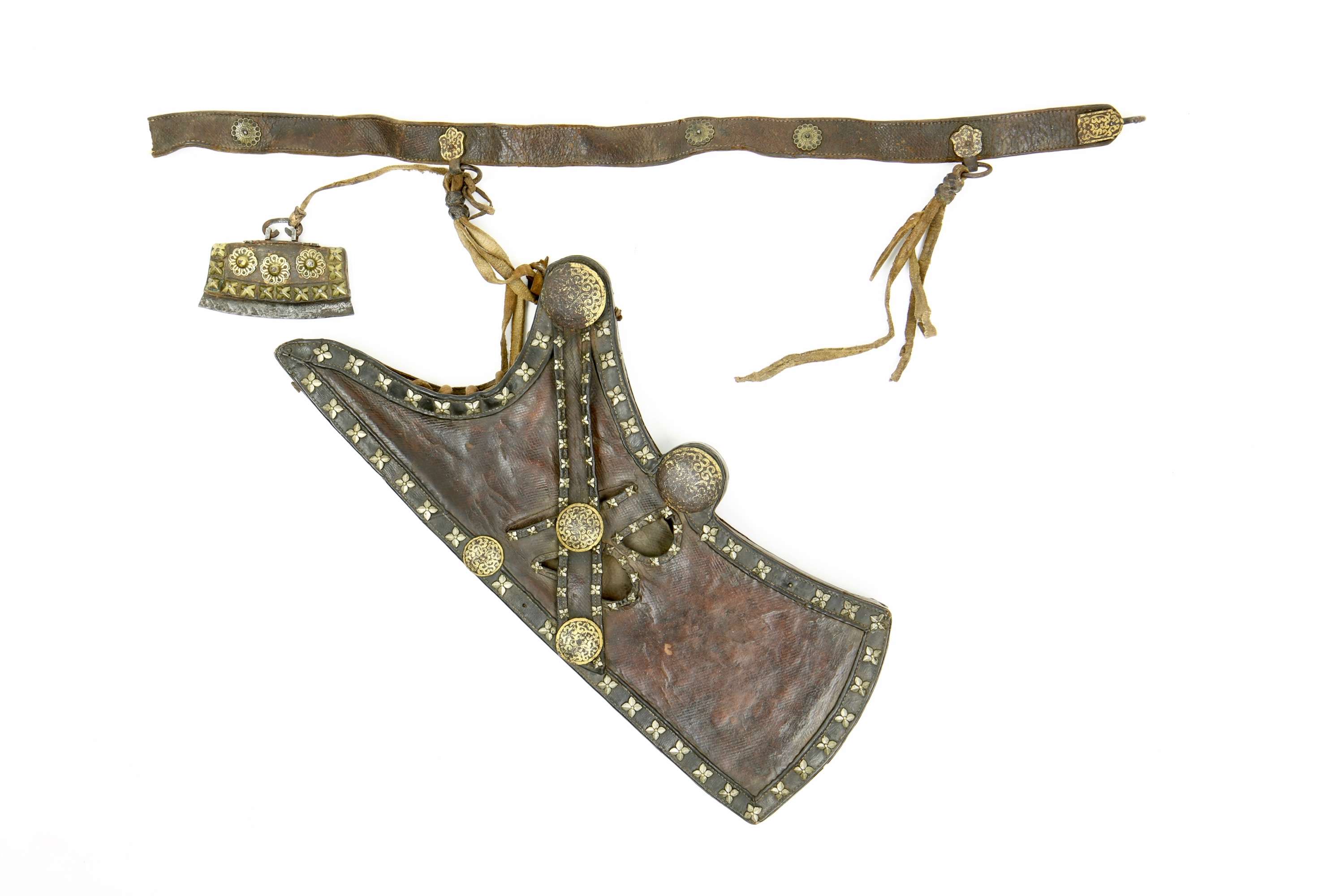 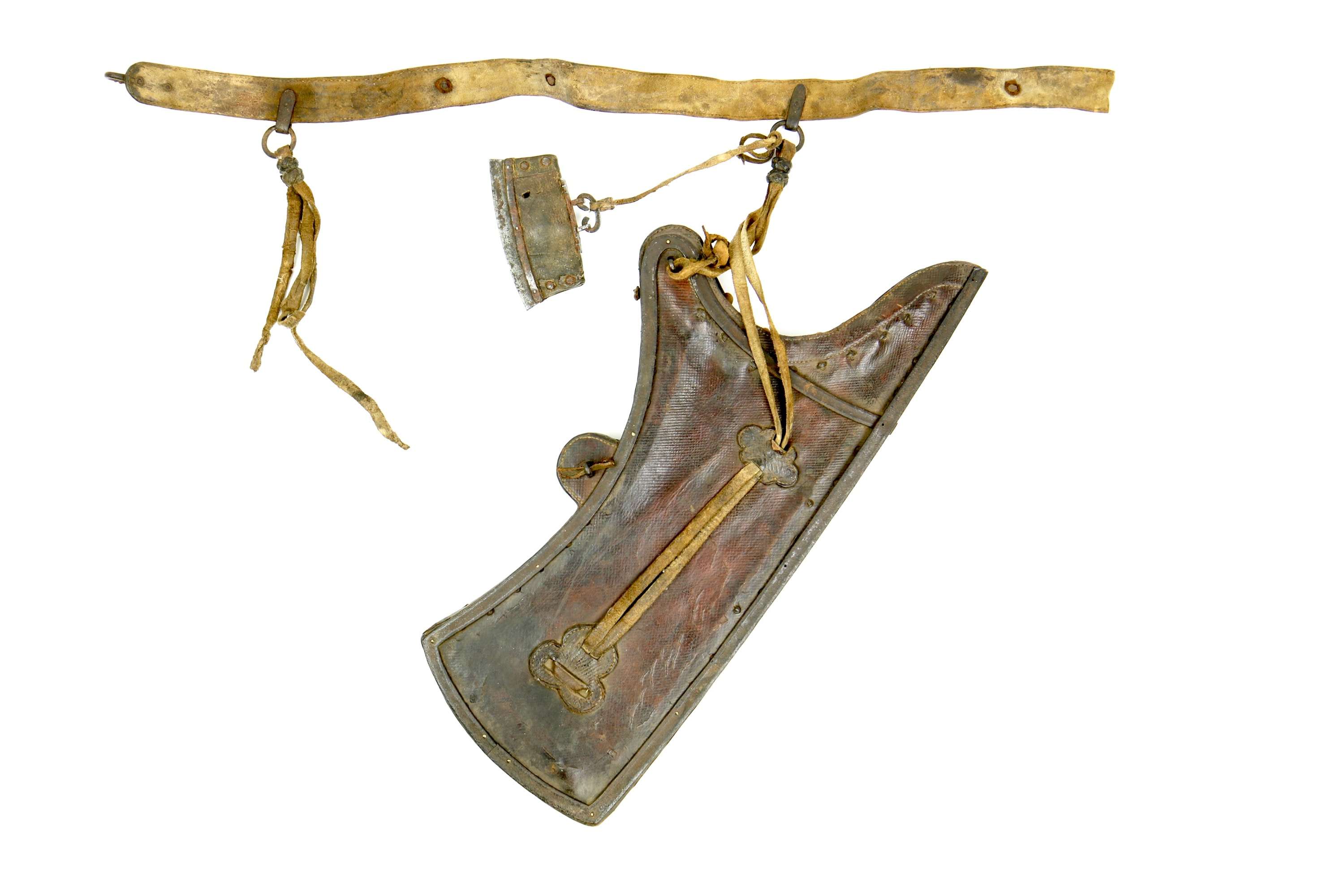 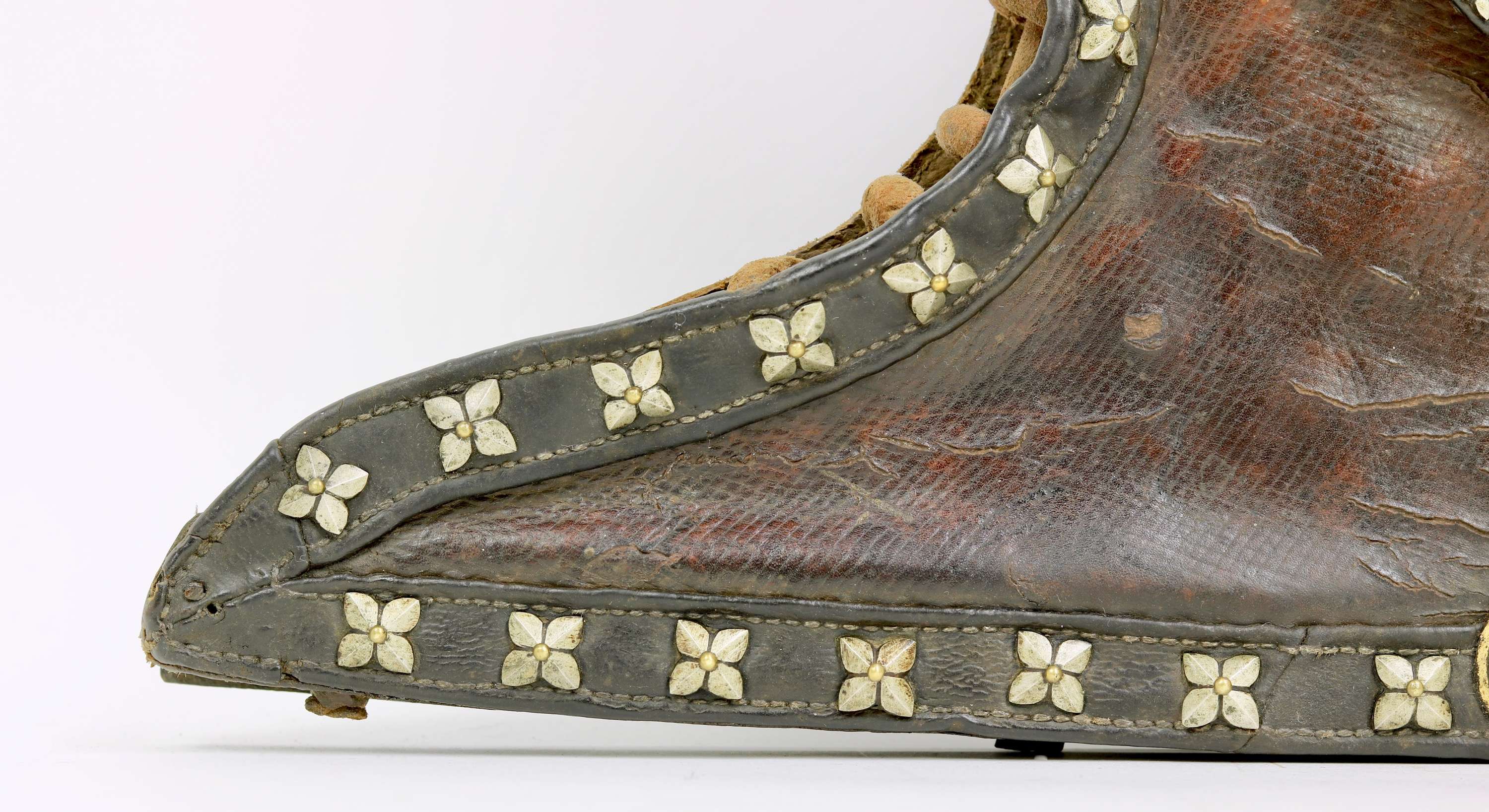 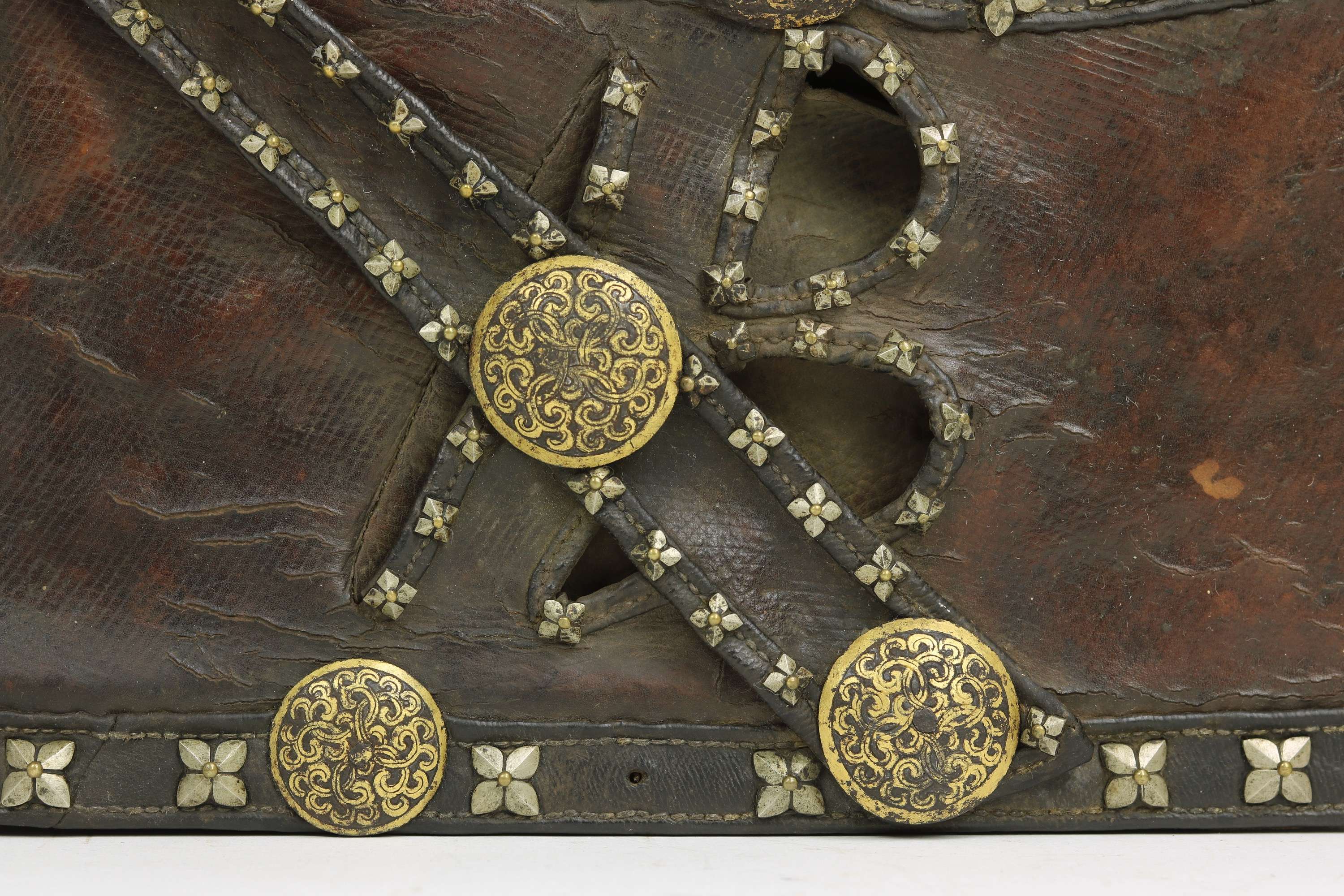 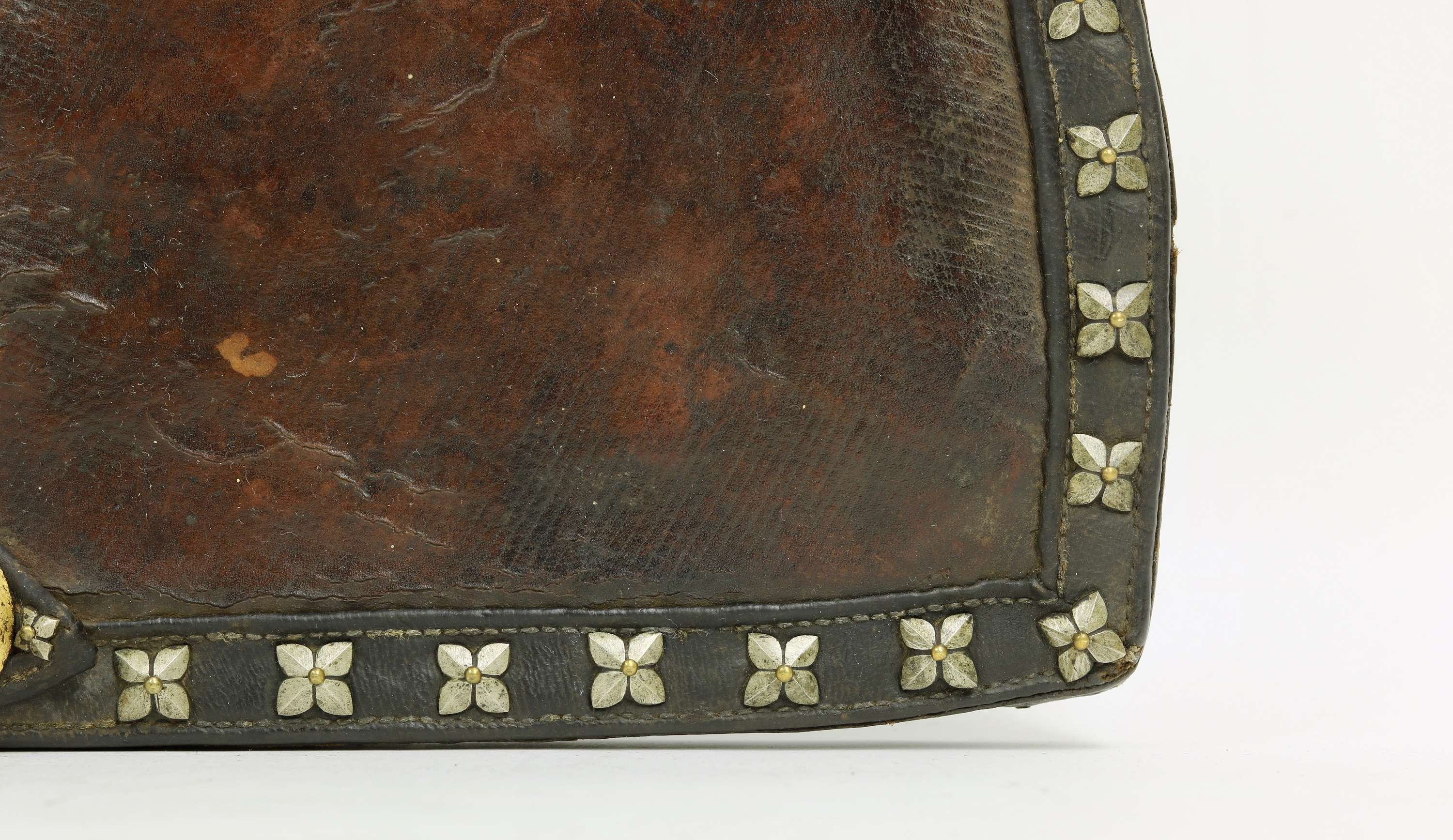 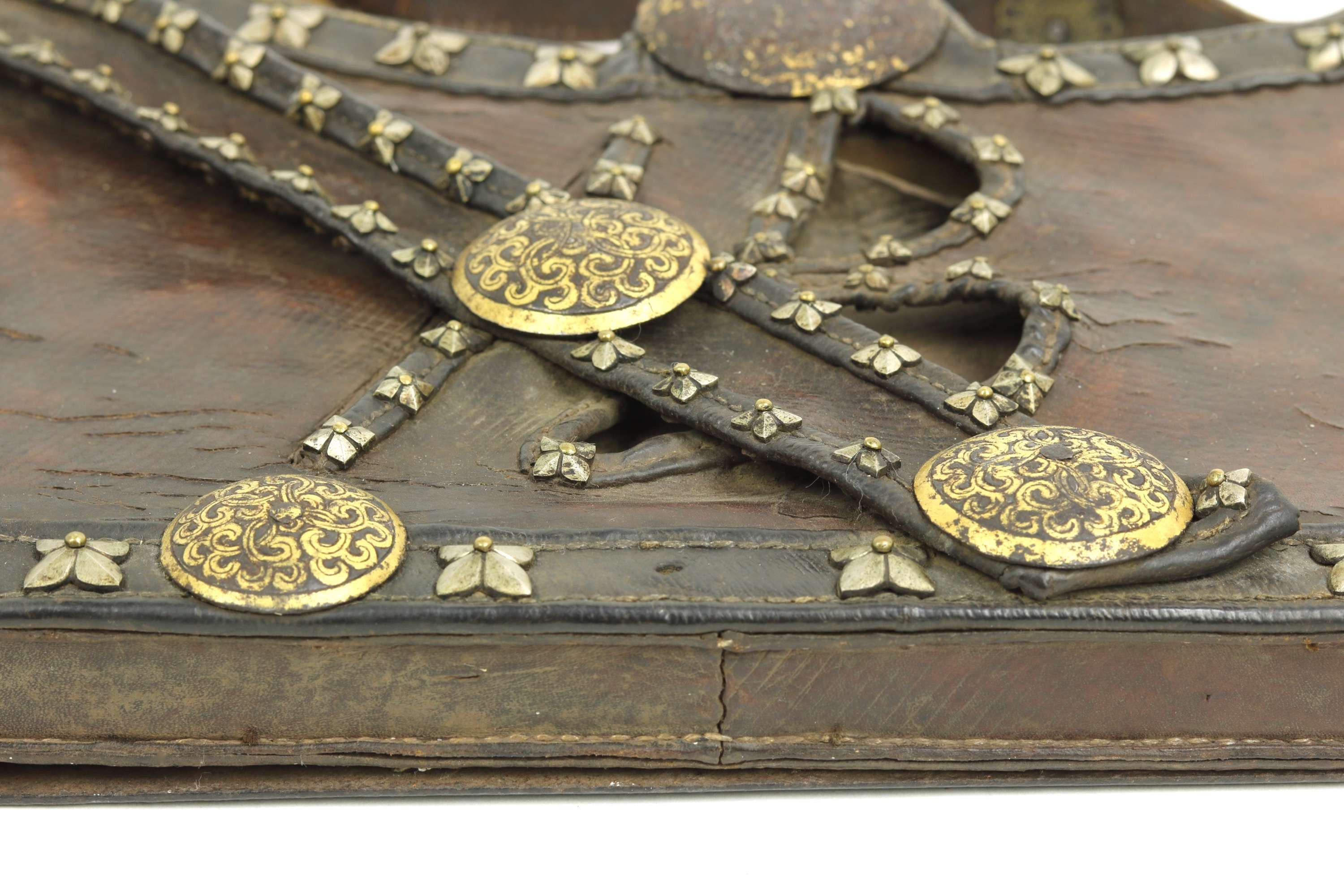 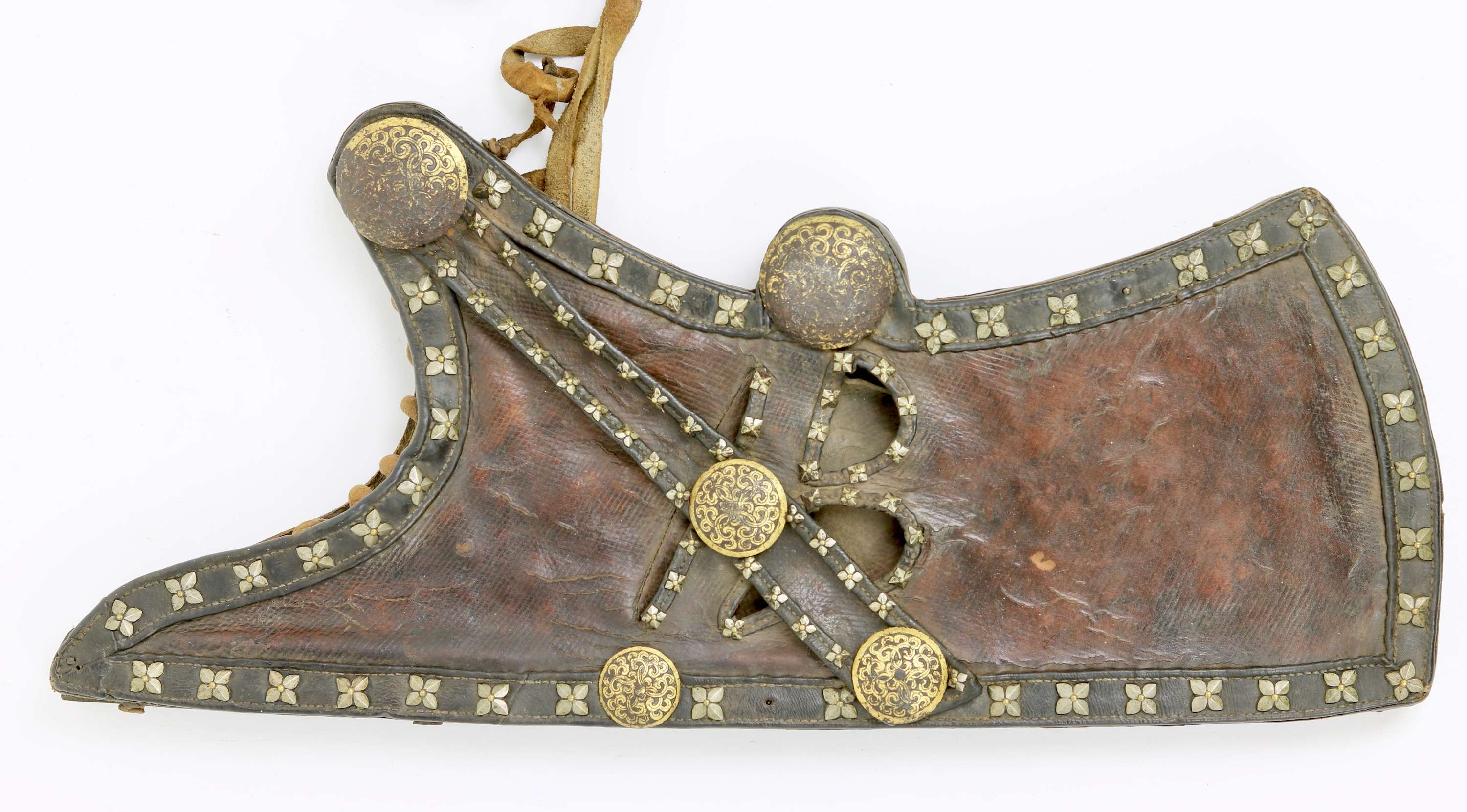 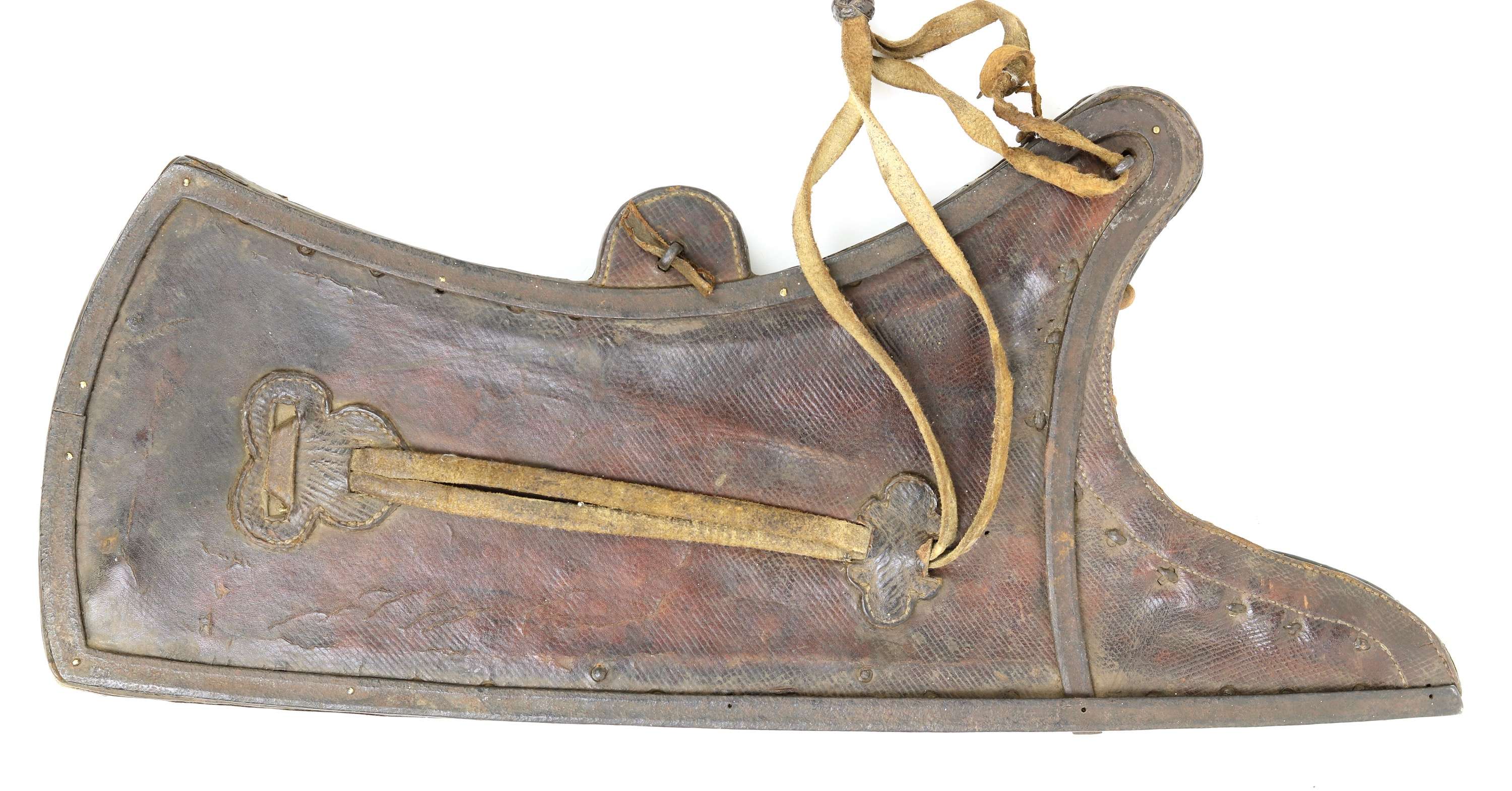 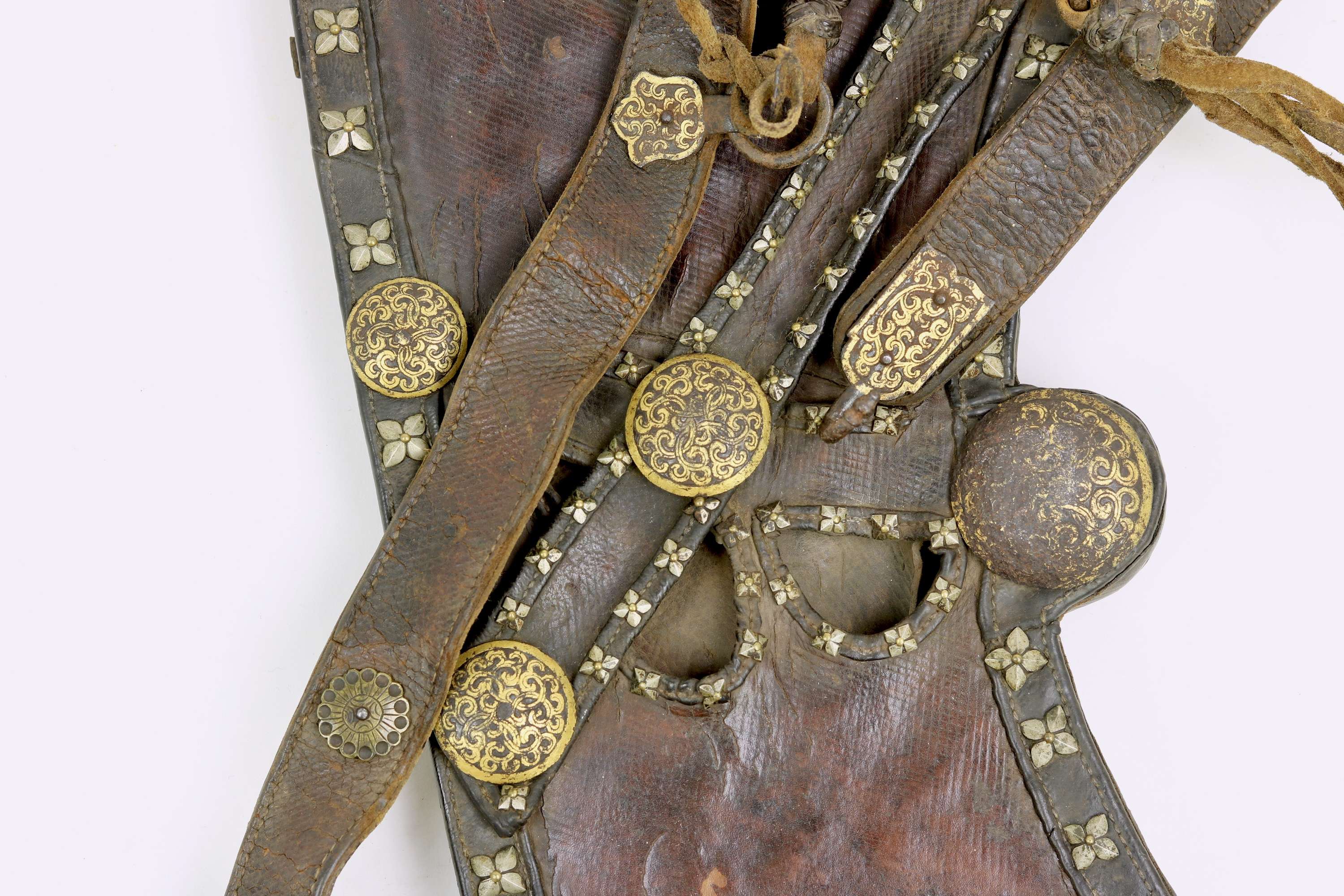 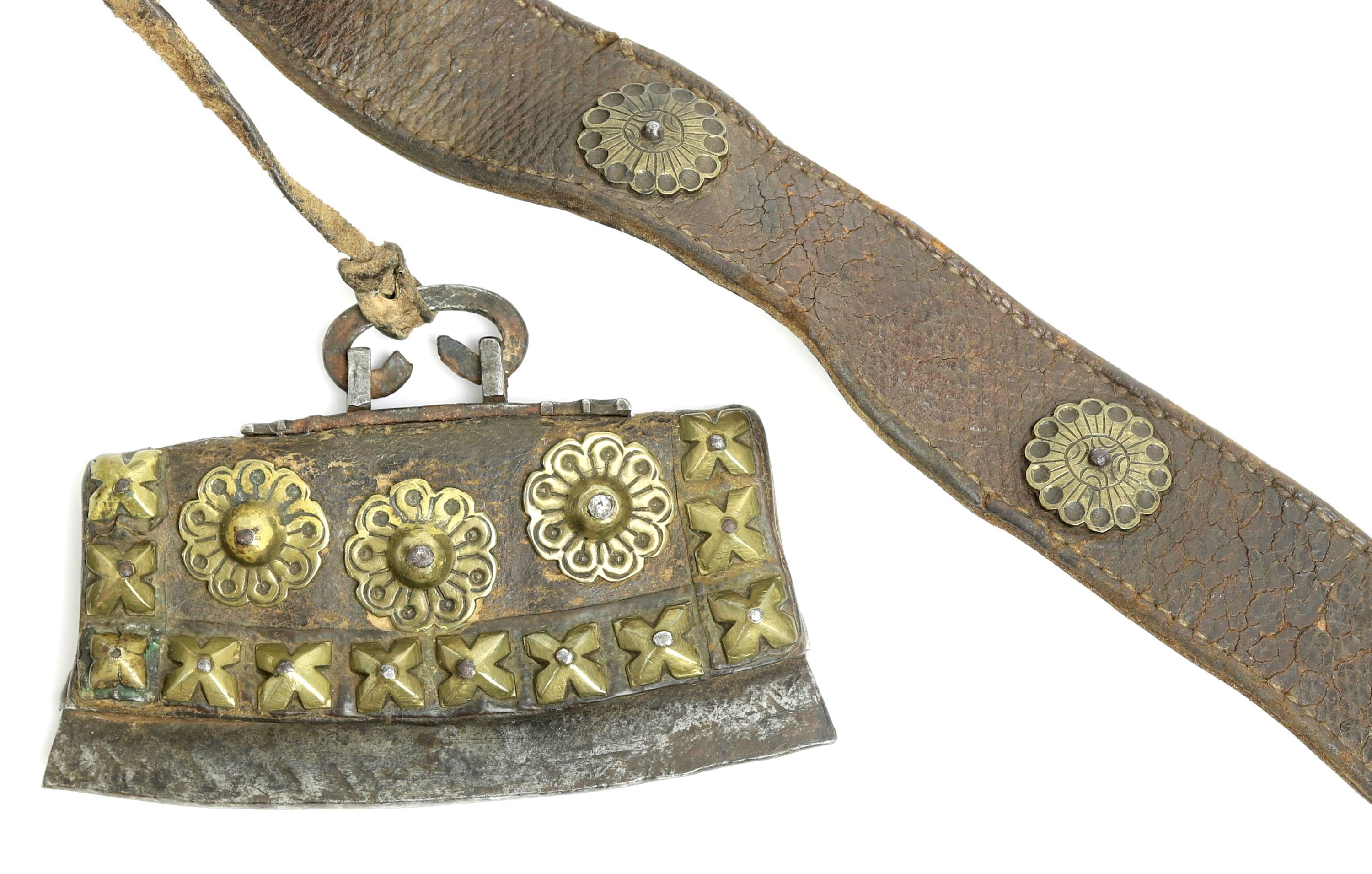 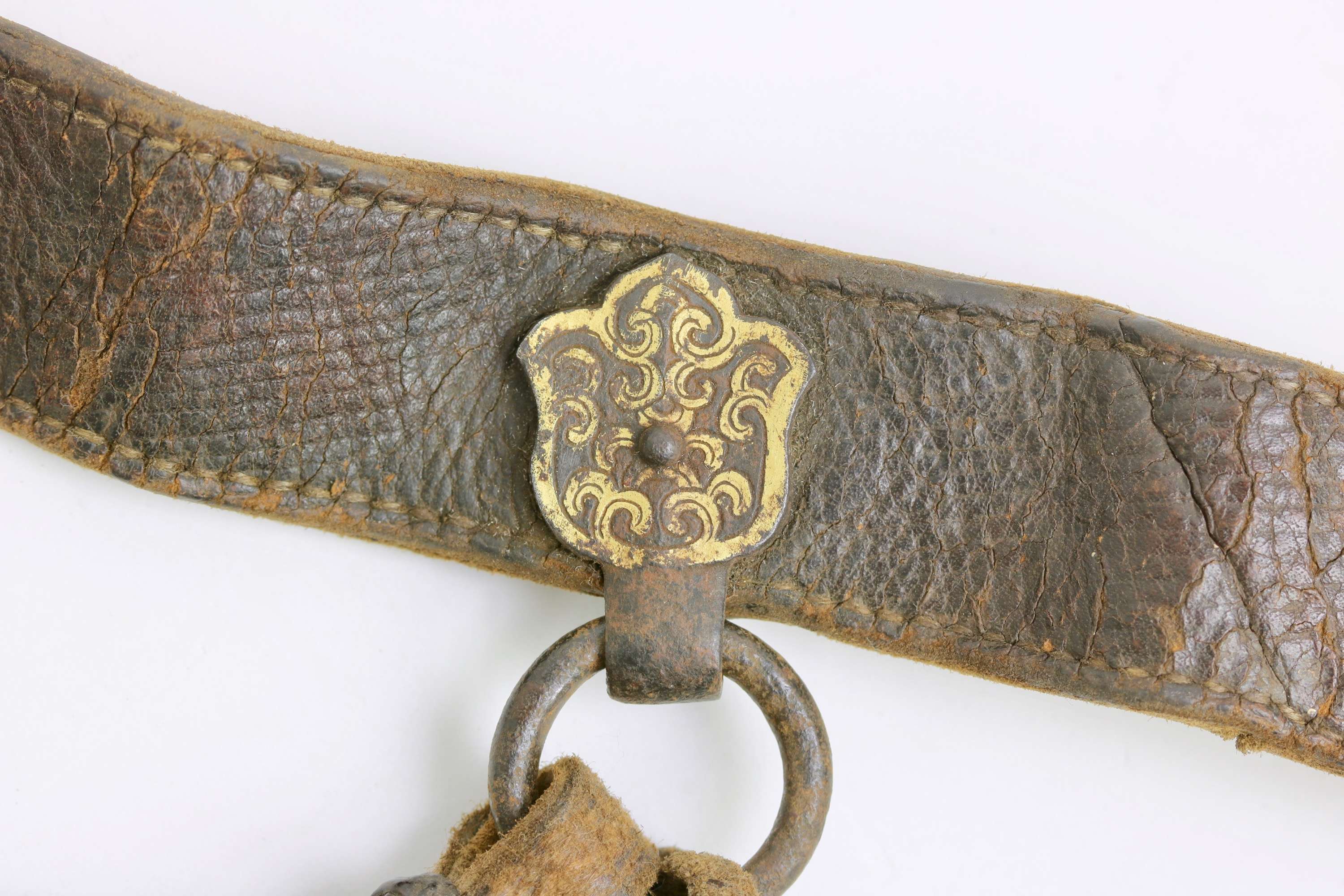 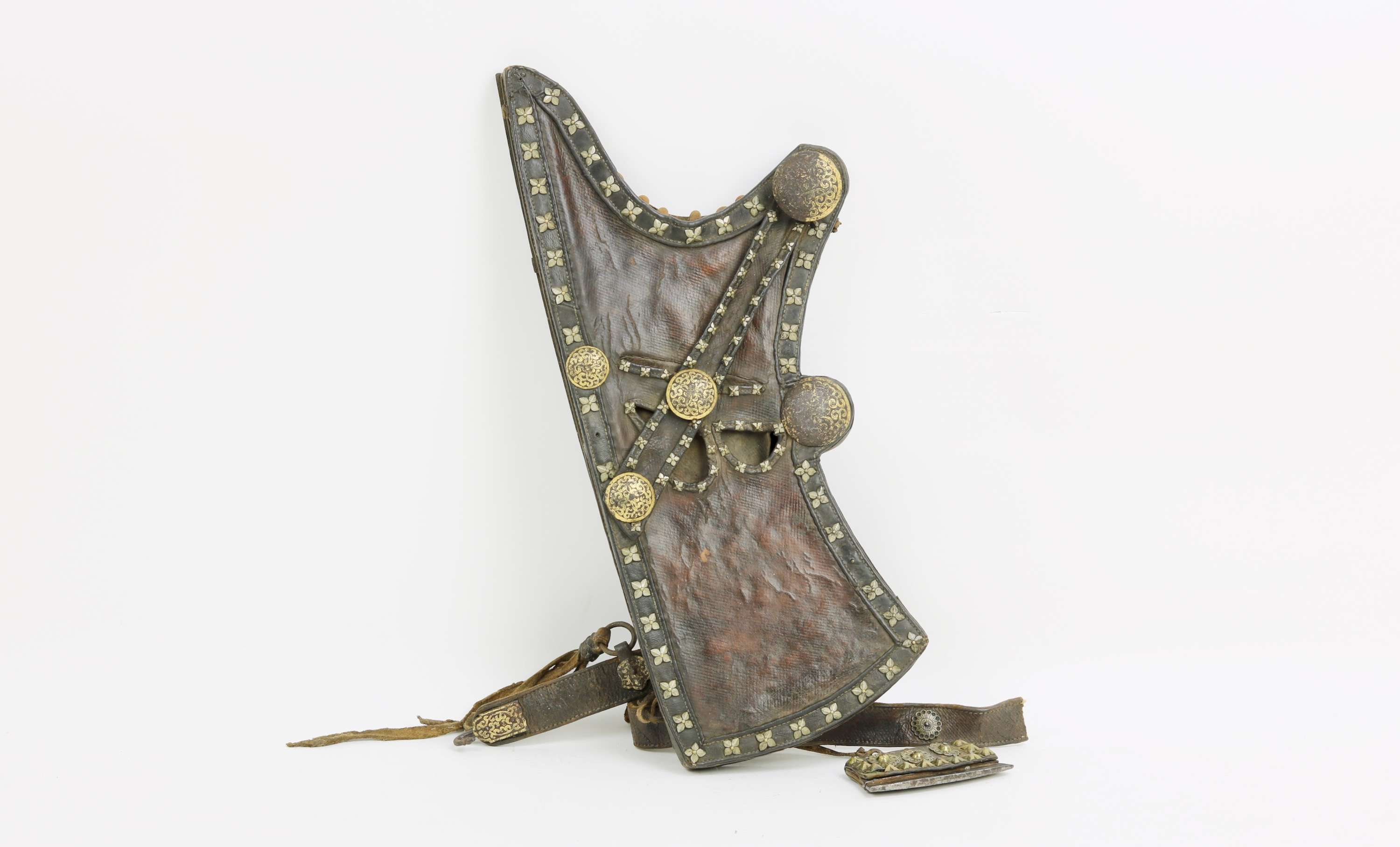