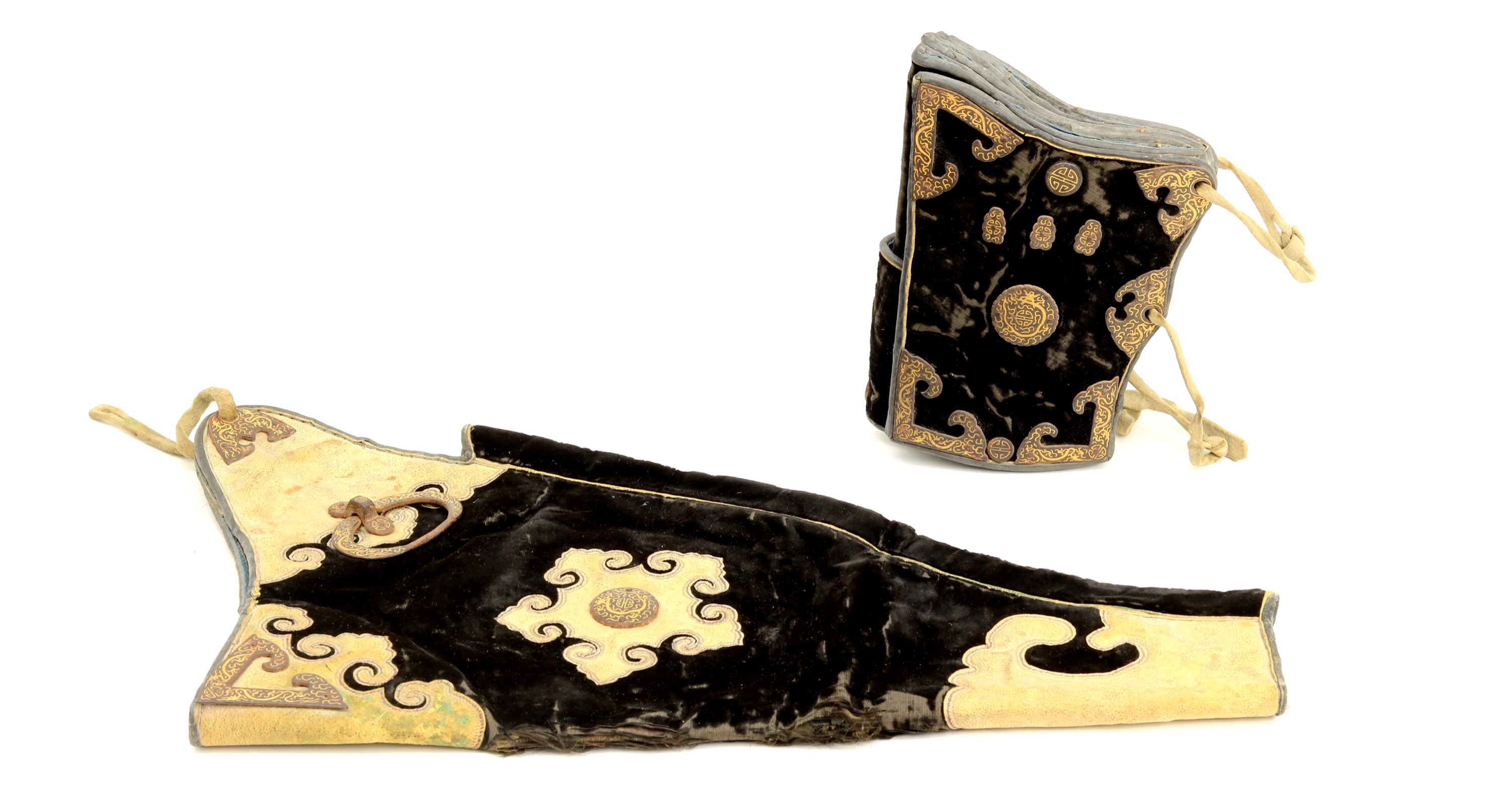 This item has been sold.
Read full article
Bowcase

The bowcase is decorated with appliques of pale green pebble-grained leather on each of its three extremities, following the outline of stylized Chinese cloud motifs. In the center is an applique of a five-pointed star shape, with each point being a cloud-head.

Both bowcase and quiver have iron mounts with golden overlay, most of them showing dragons and many stylized shòu (壽), symbols meaning longevity. The iron was lacquered black to make the gold stand out, lacquer now only partly remaining.

The bowcase is mounted with an L-shaped mount in the left hand corner, a suspension mount in the right corner. It further has a "saber ring" that was used to hold the bare saber when riding into battle, and a round boss in the center.

The quiver is of a type rarely encountered. The typical Manchu configuration has one large pocket, and three small pockets in the back connected by two hinges. The pockets on the back are for special arrows with large heads, often used for hunting. This quiver, instead, has no less than seven narrow pockets; 4 wide pockets of which 3 of them have a smaller inner pocket. This layout is optimized for carrying a relatively large number of arrows with smaller heads, like standard military war arrows.

Like most Qing quivers, there is a bolt and a nut to tighten the quiver. On the back are several loops for the quiver's suspension system.

It comes with a partial orange silk belt with white metal suspension loops woven in it. The belt probably misses about 1/3rd of its original length.

Decent condition overall. Some wear and tear to the fragile velvet. Also some cracks in the leather appliques. Mounts with some corrosion but overall in fair condition.

Looking at the shape and overall decoration, I think this set most likely dates from the first half of the 19th century. The style of the dragons on the iron mounts reminds somewhat of Mongolian work, and it makes me wonder whether the set perhaps belonged to an officer in the Mongolian Banners of the Qing dynasty.

Over the years, only one other set like this turned up, which remains in an anonymous private collection. It also came with that orange belt, but what is white on this set was more green and there were some subtle differences in construction.

A very nice and rather rare set of Qing dynasty bowcase and quiver, with iron mounts decorated with dragons in gold. The layout of the quiver suggests a purely military purpose, while the gold indicates a high rank of the wearer. The style of the set is so rare that it is not represented in any museum collections I know of. 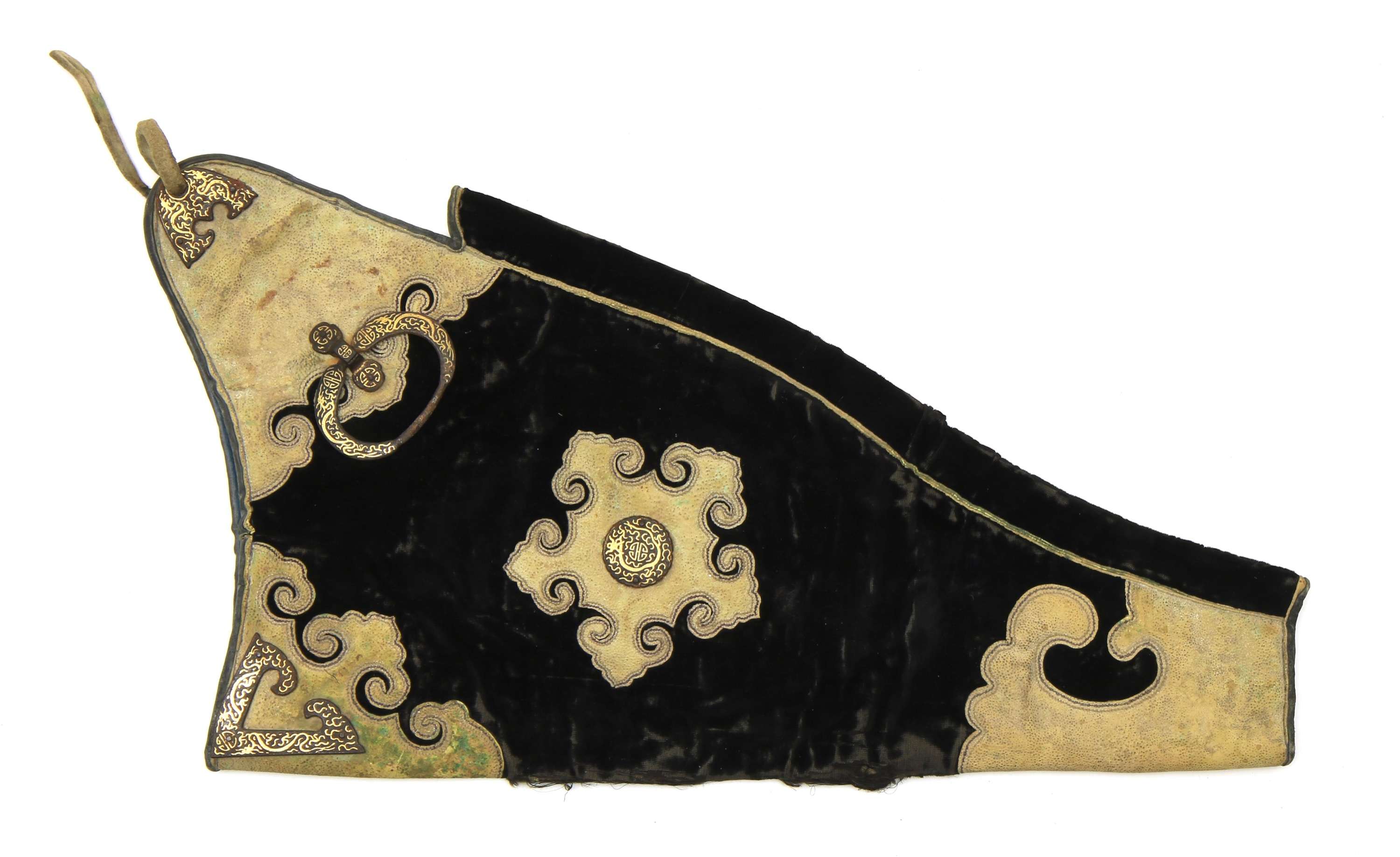 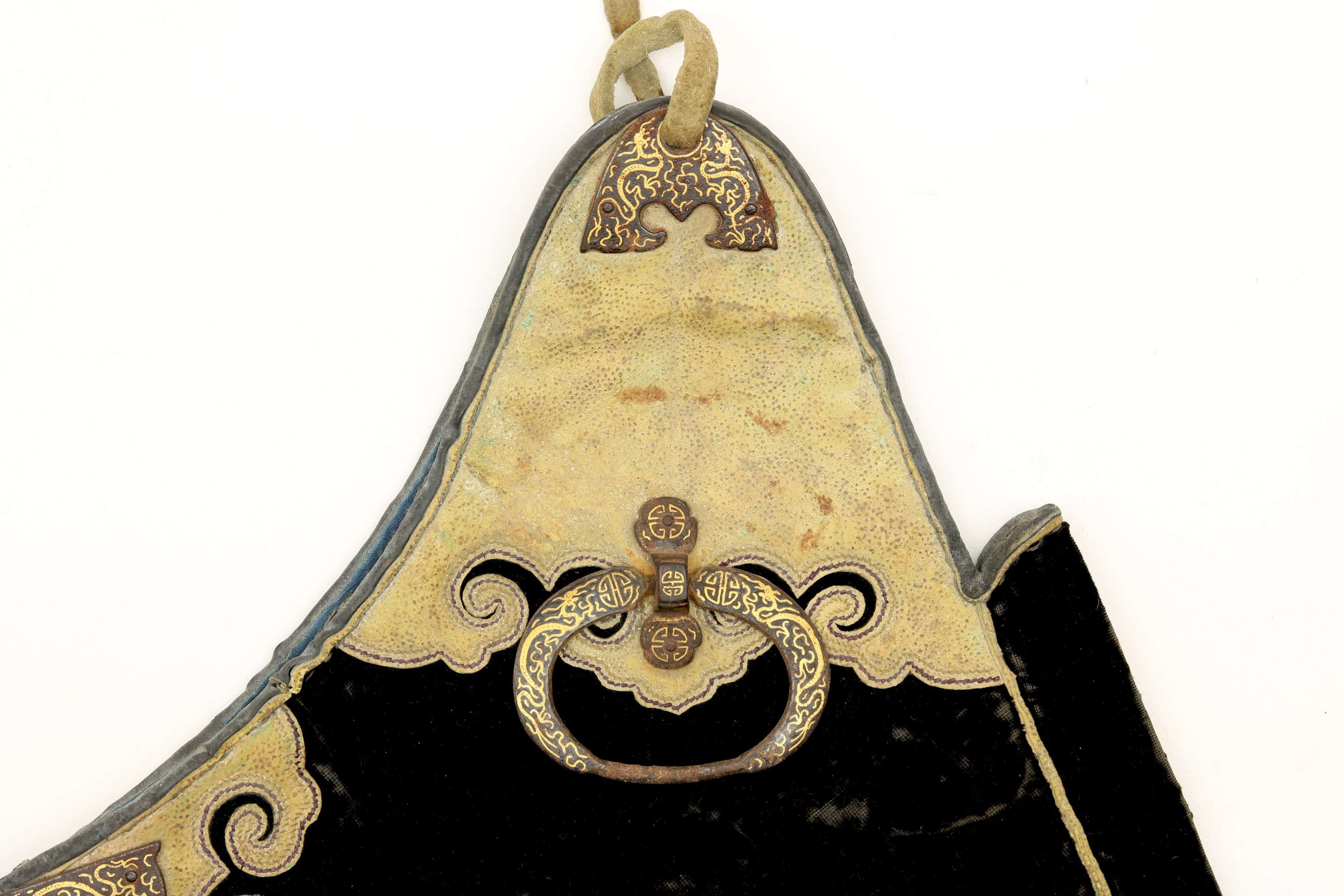 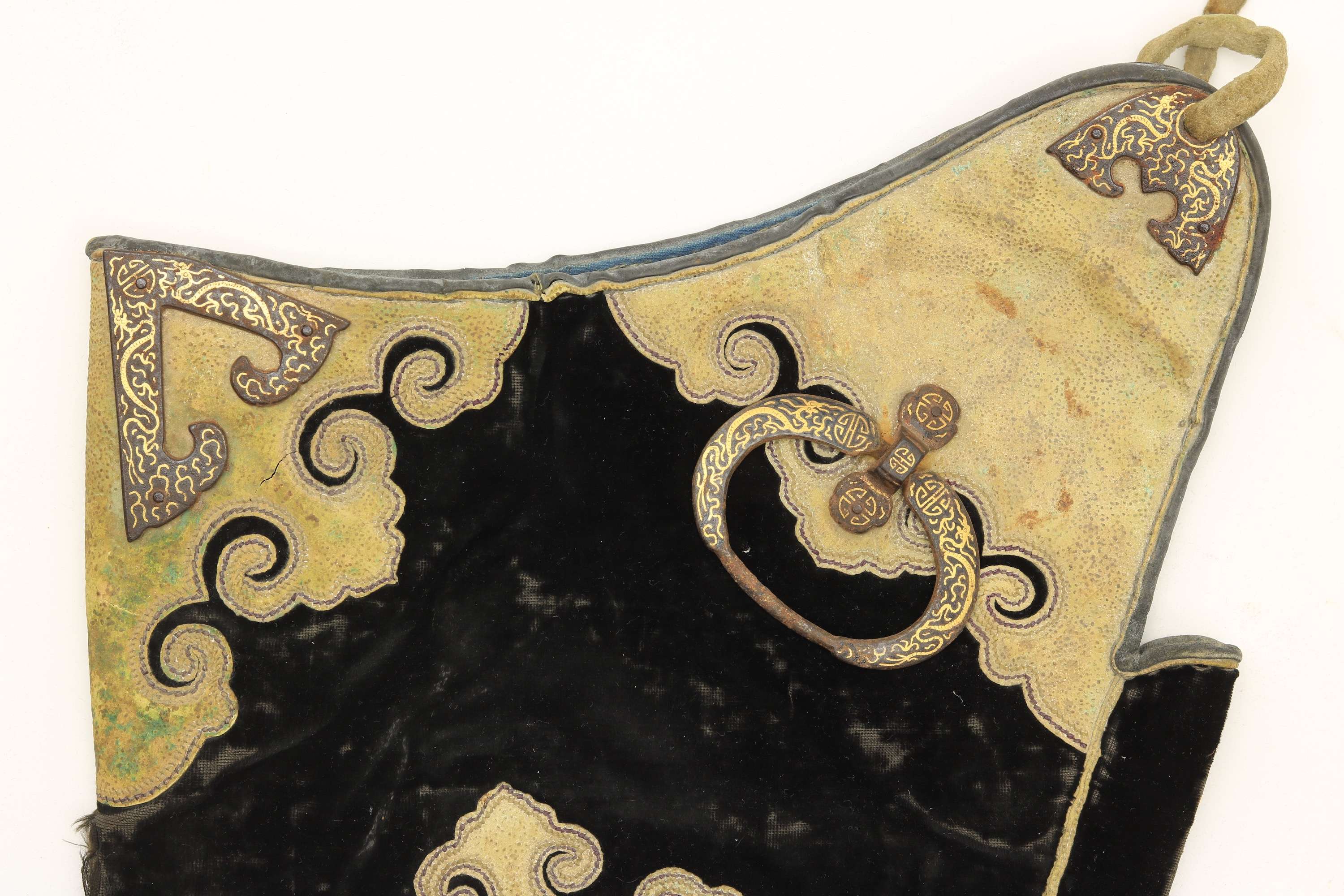 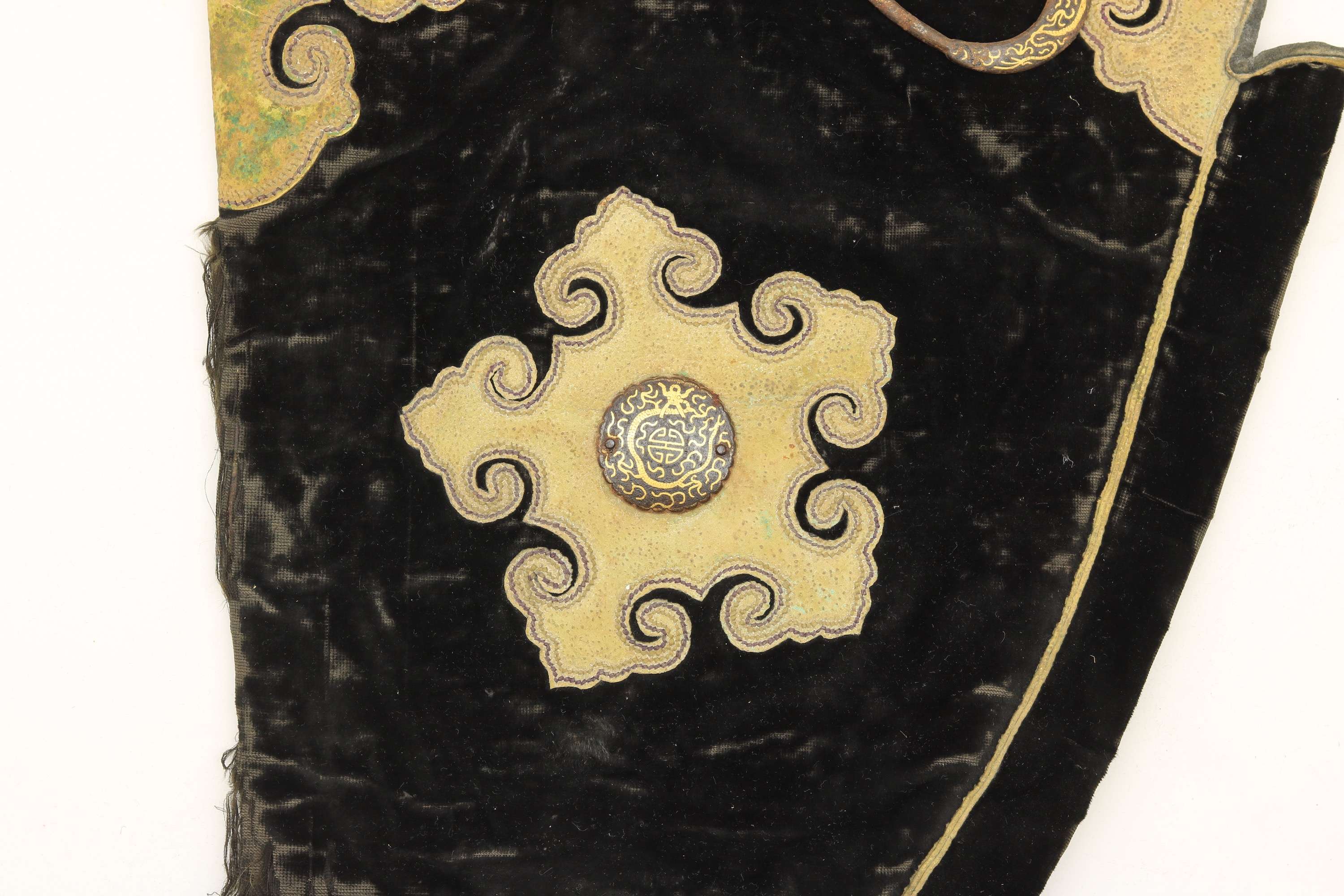 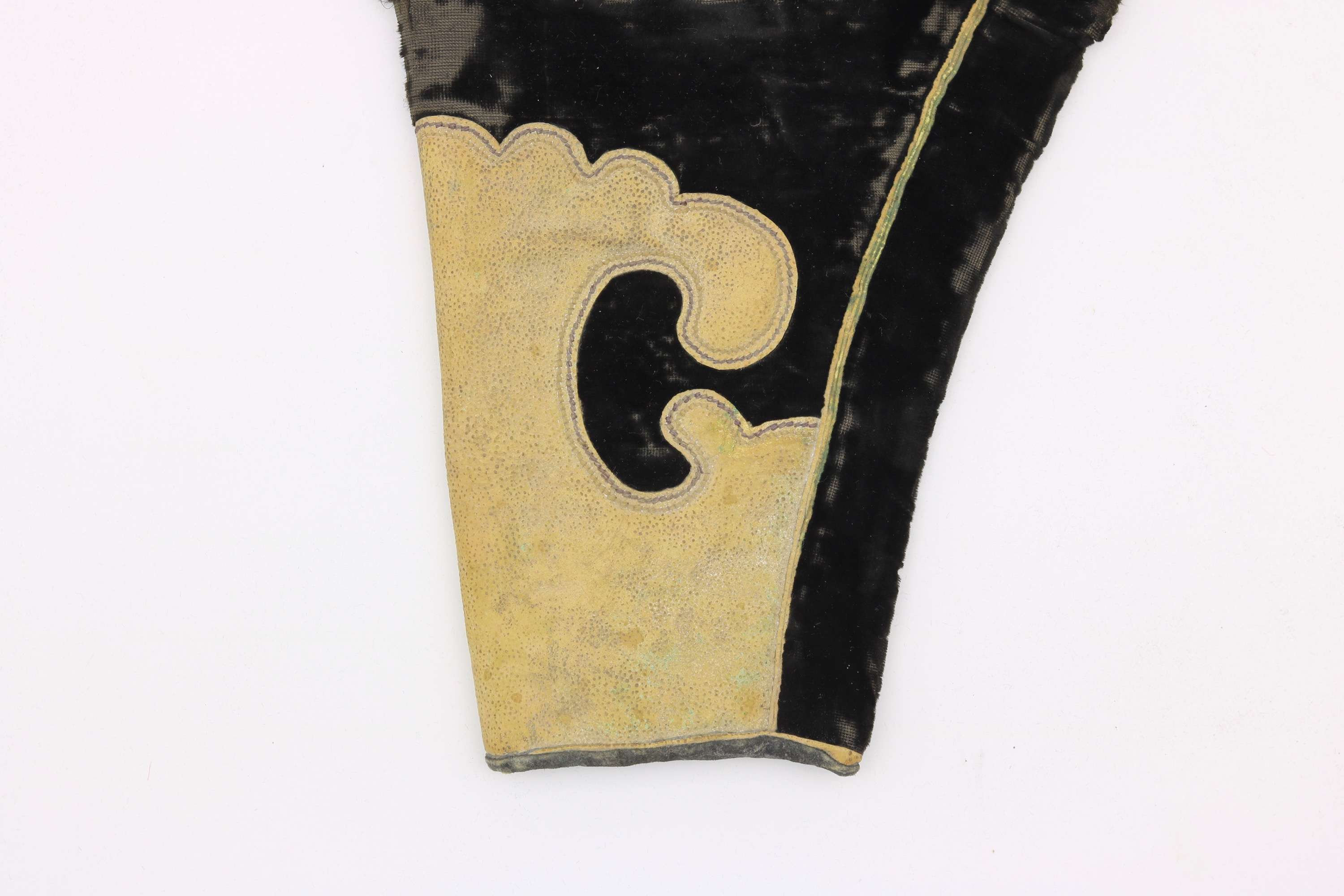 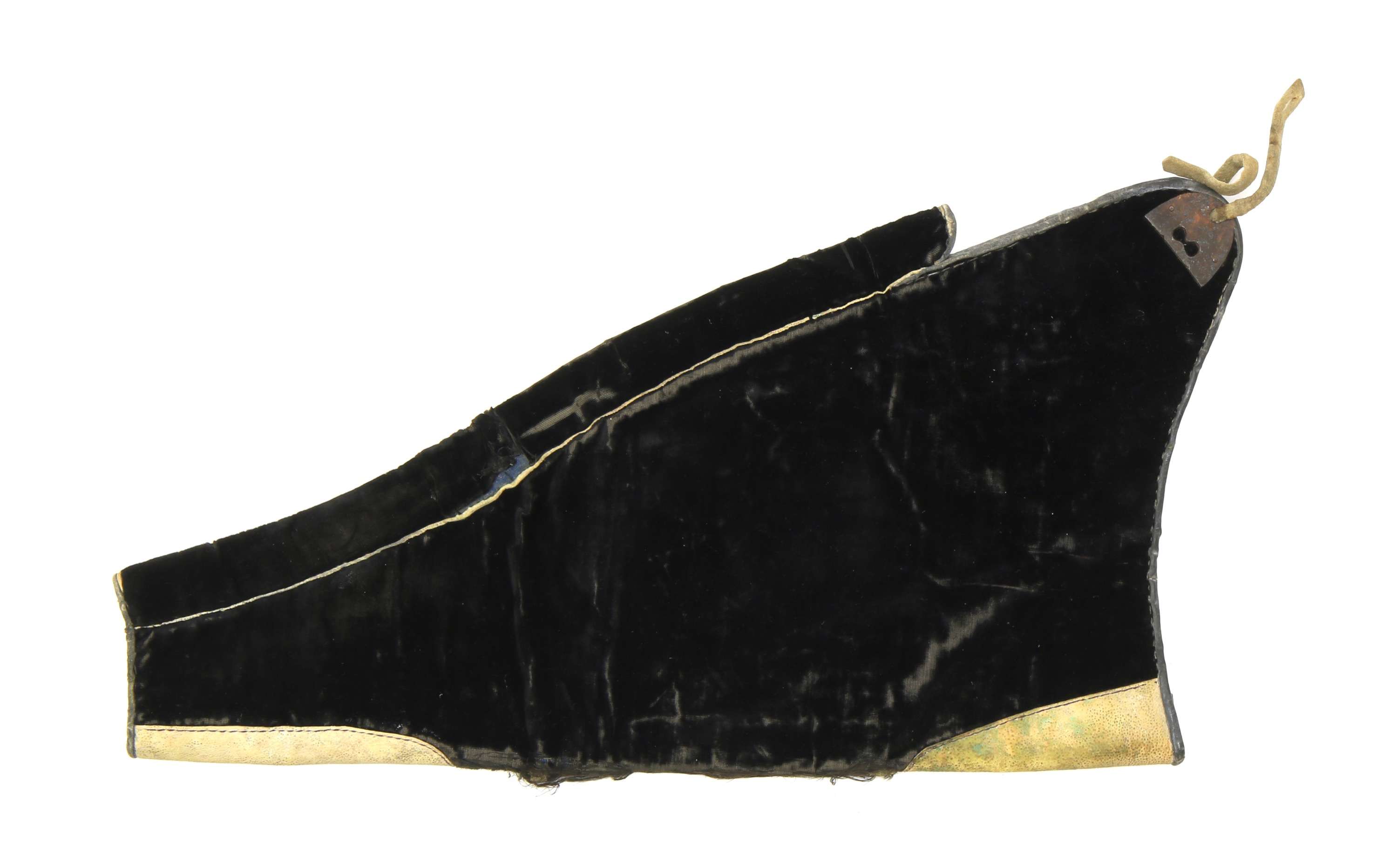 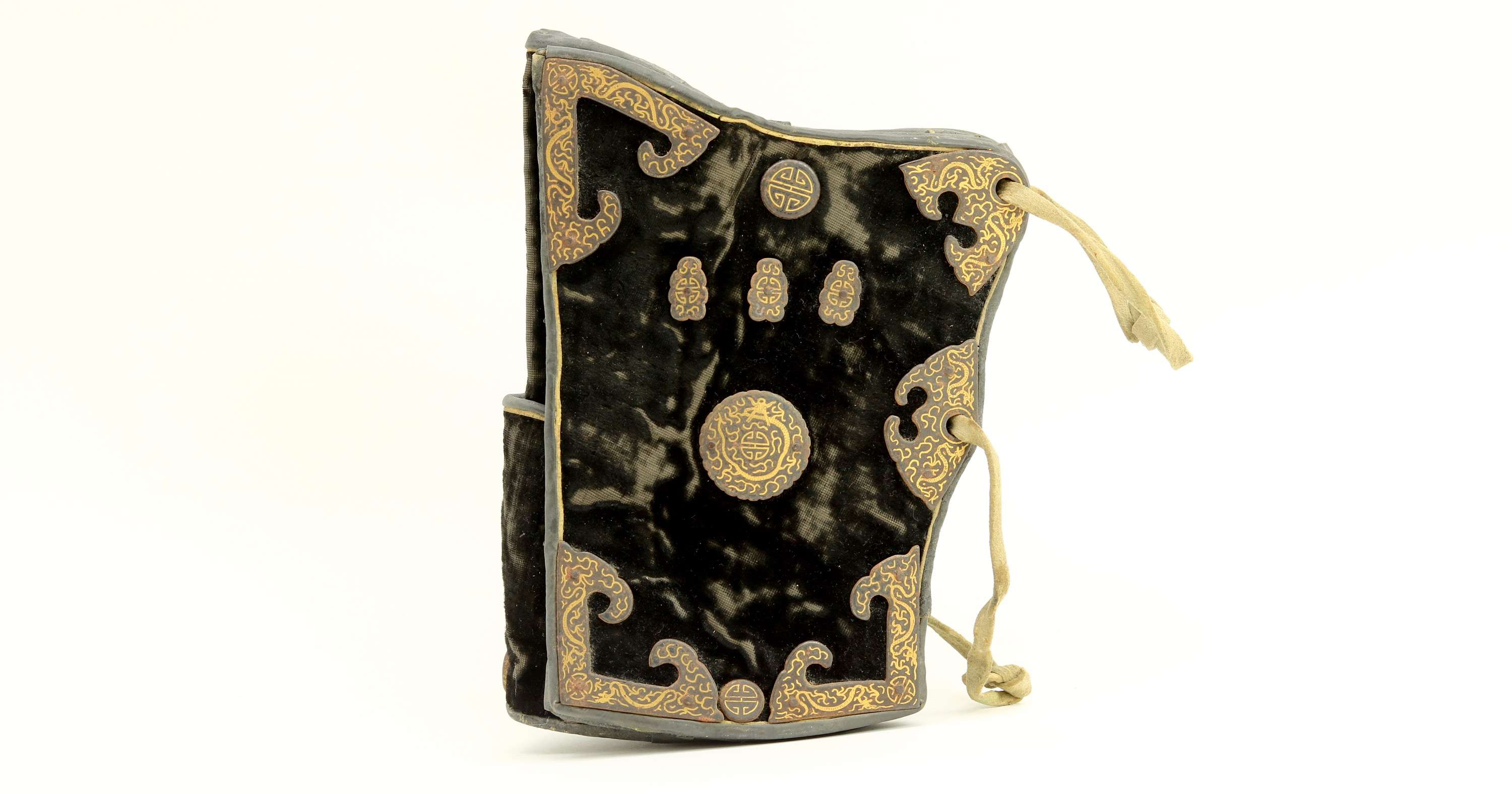 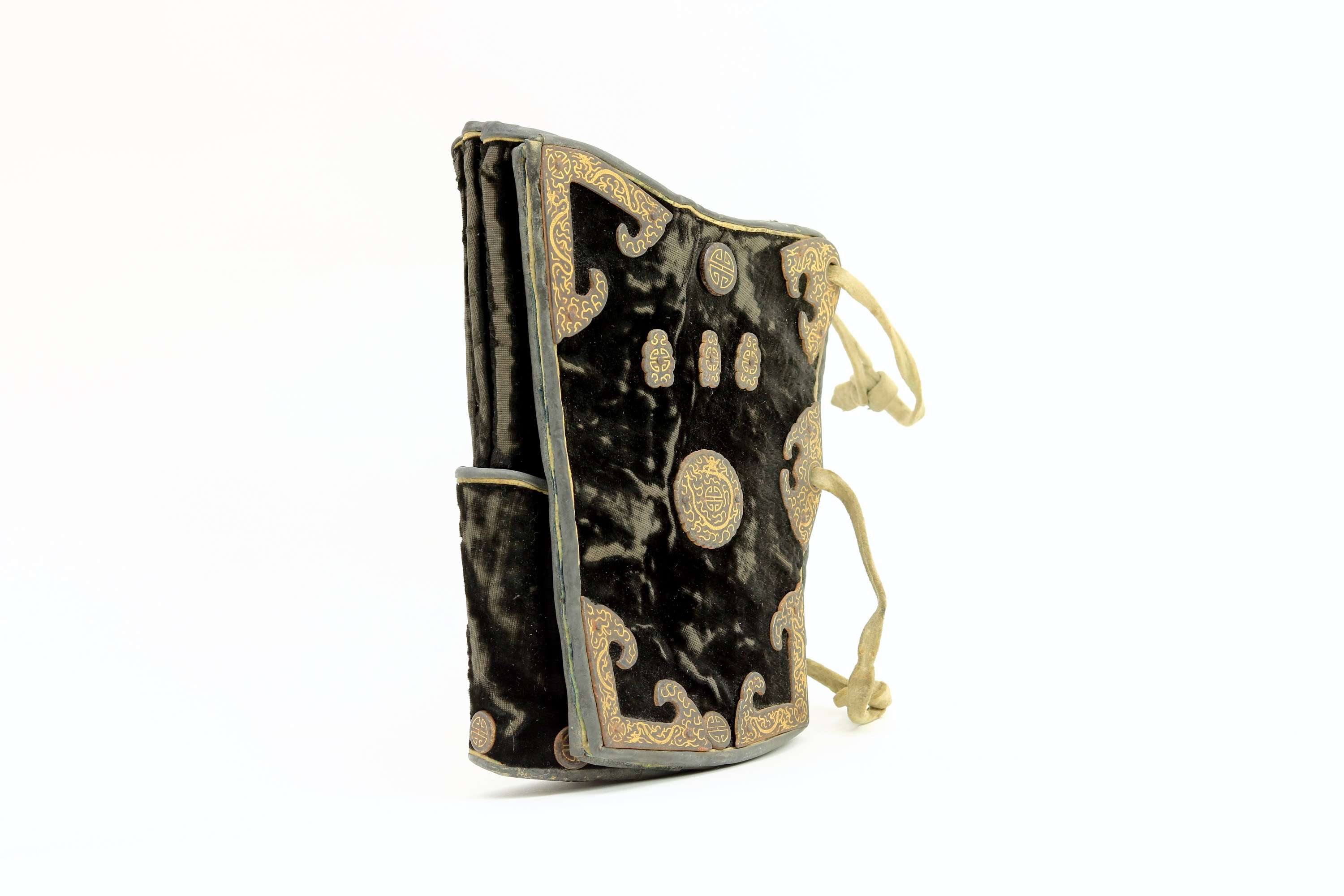 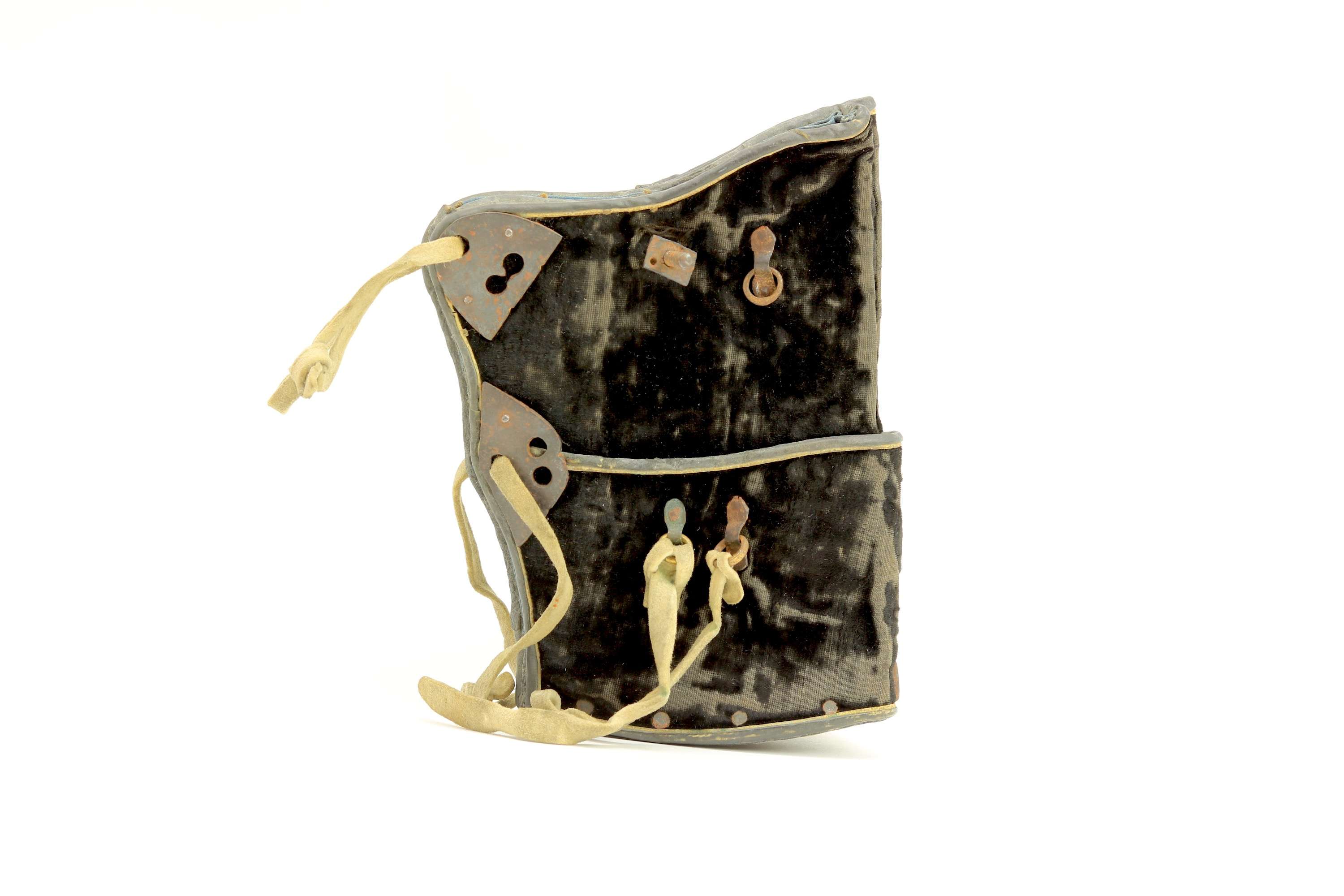 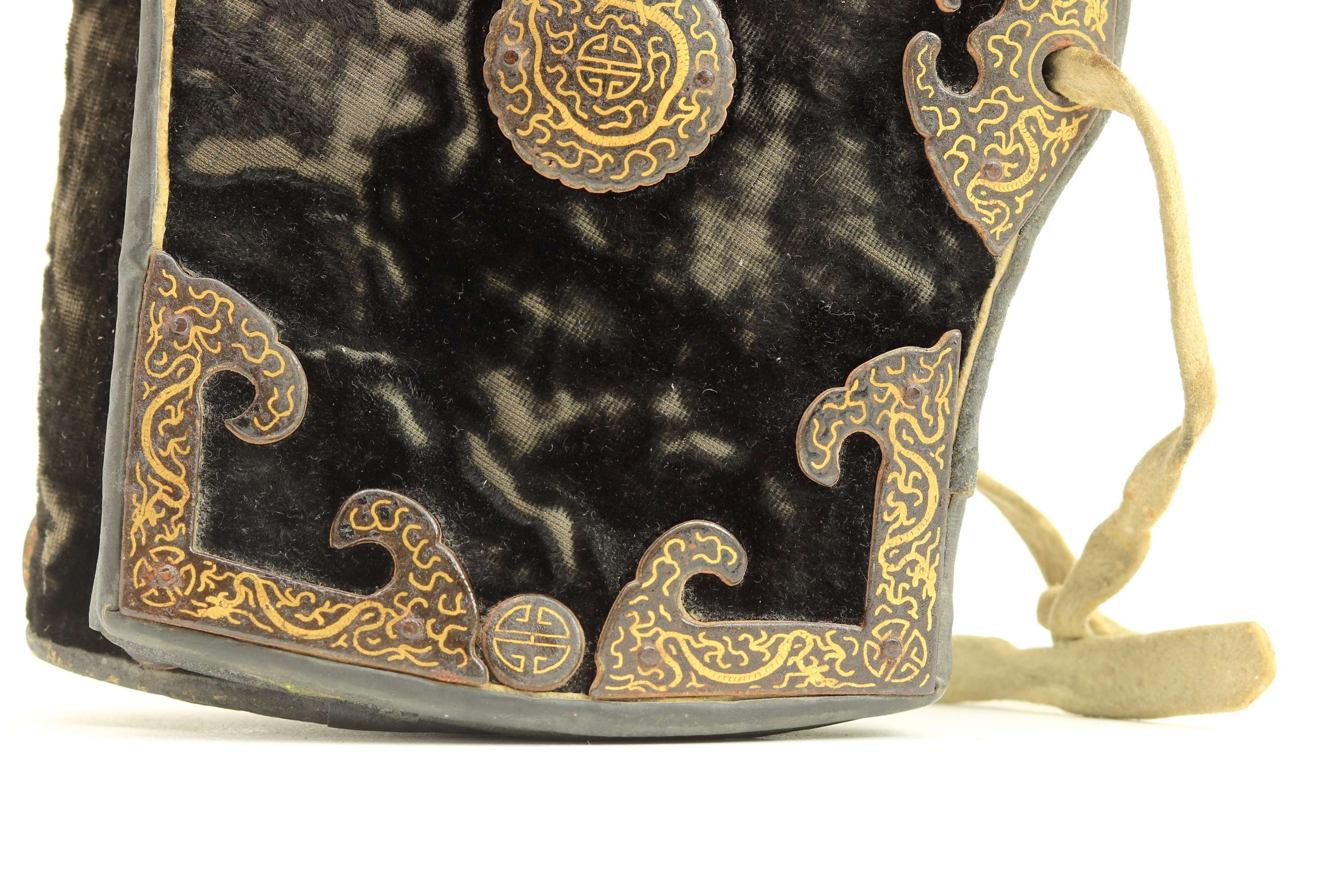 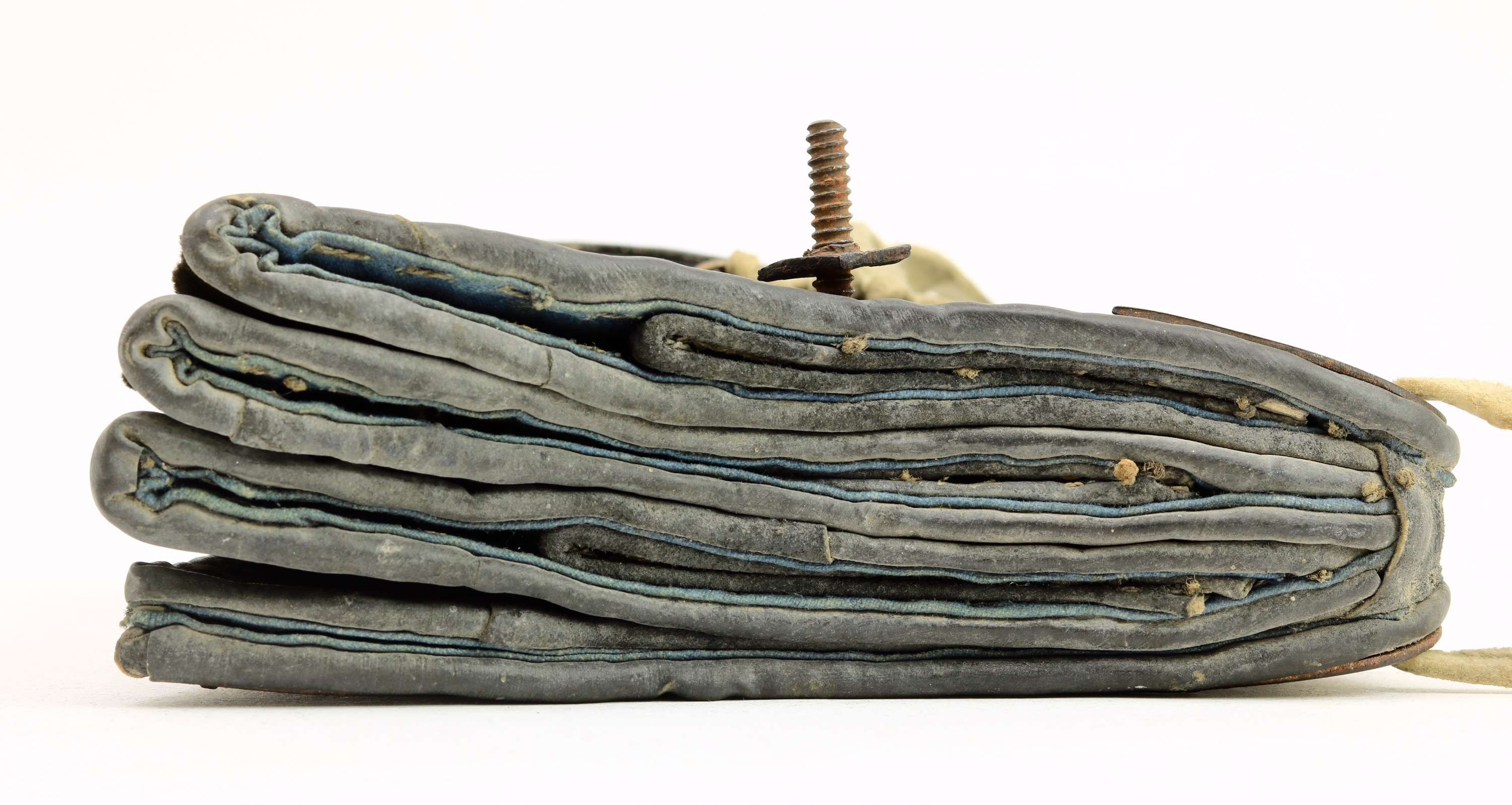 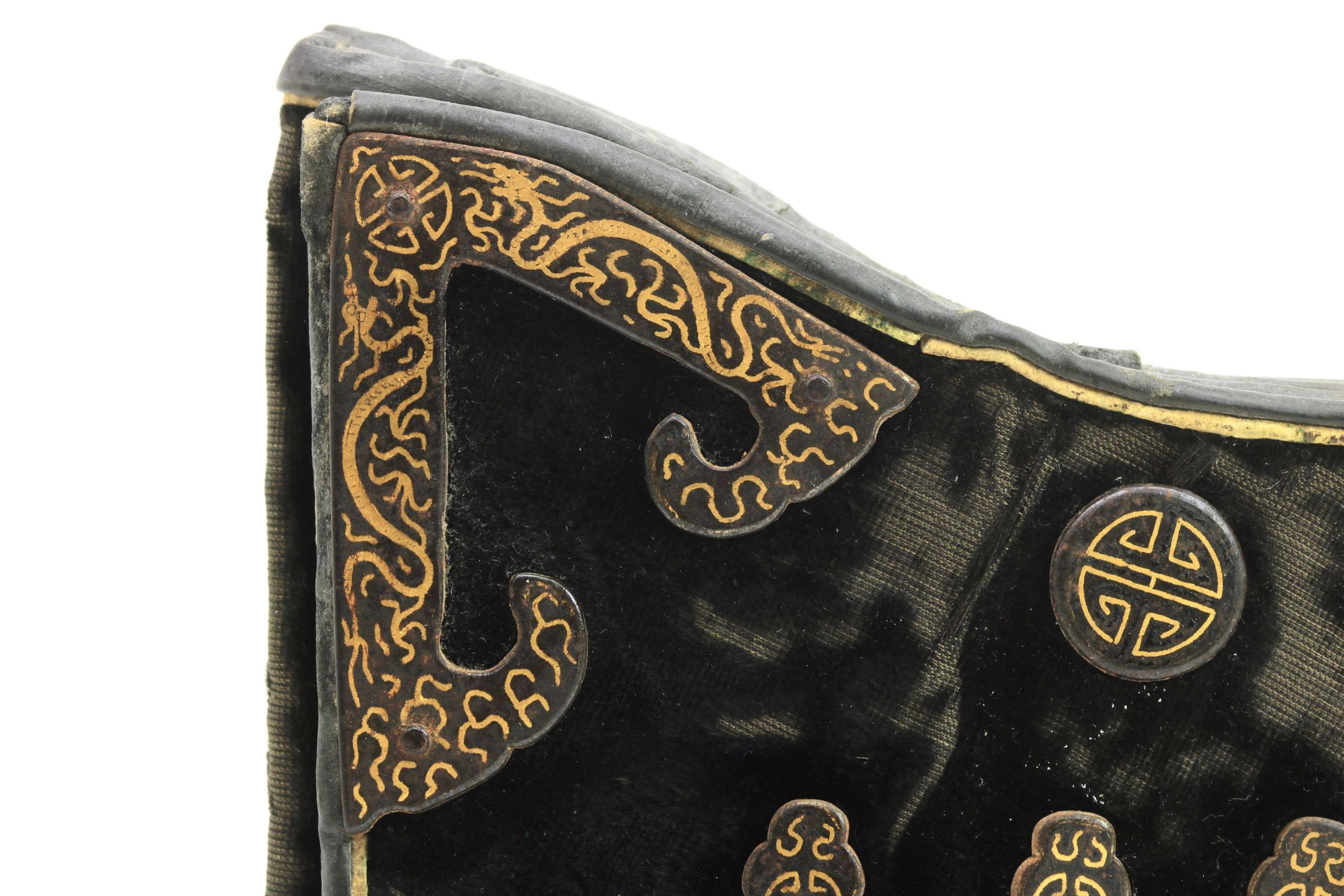 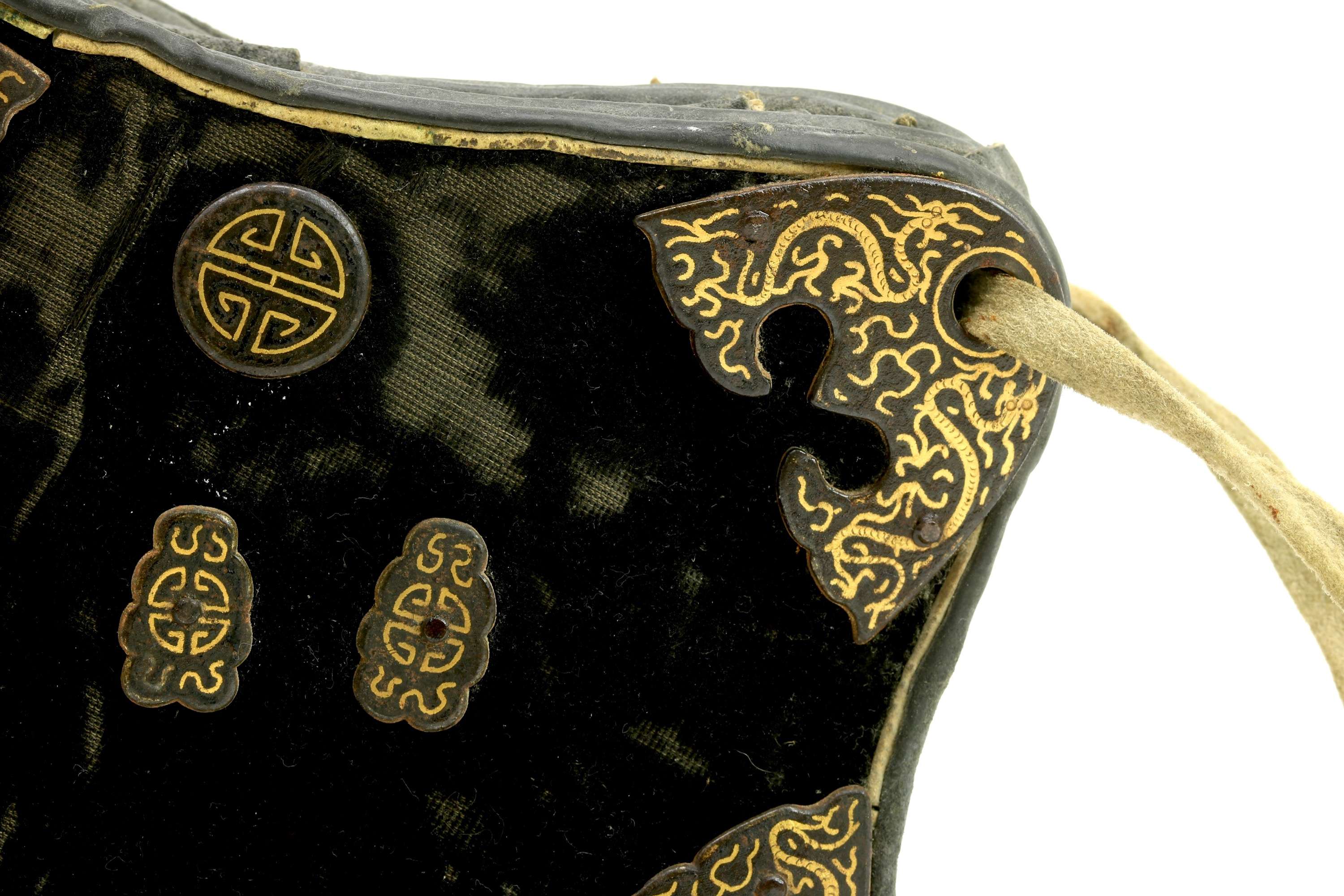 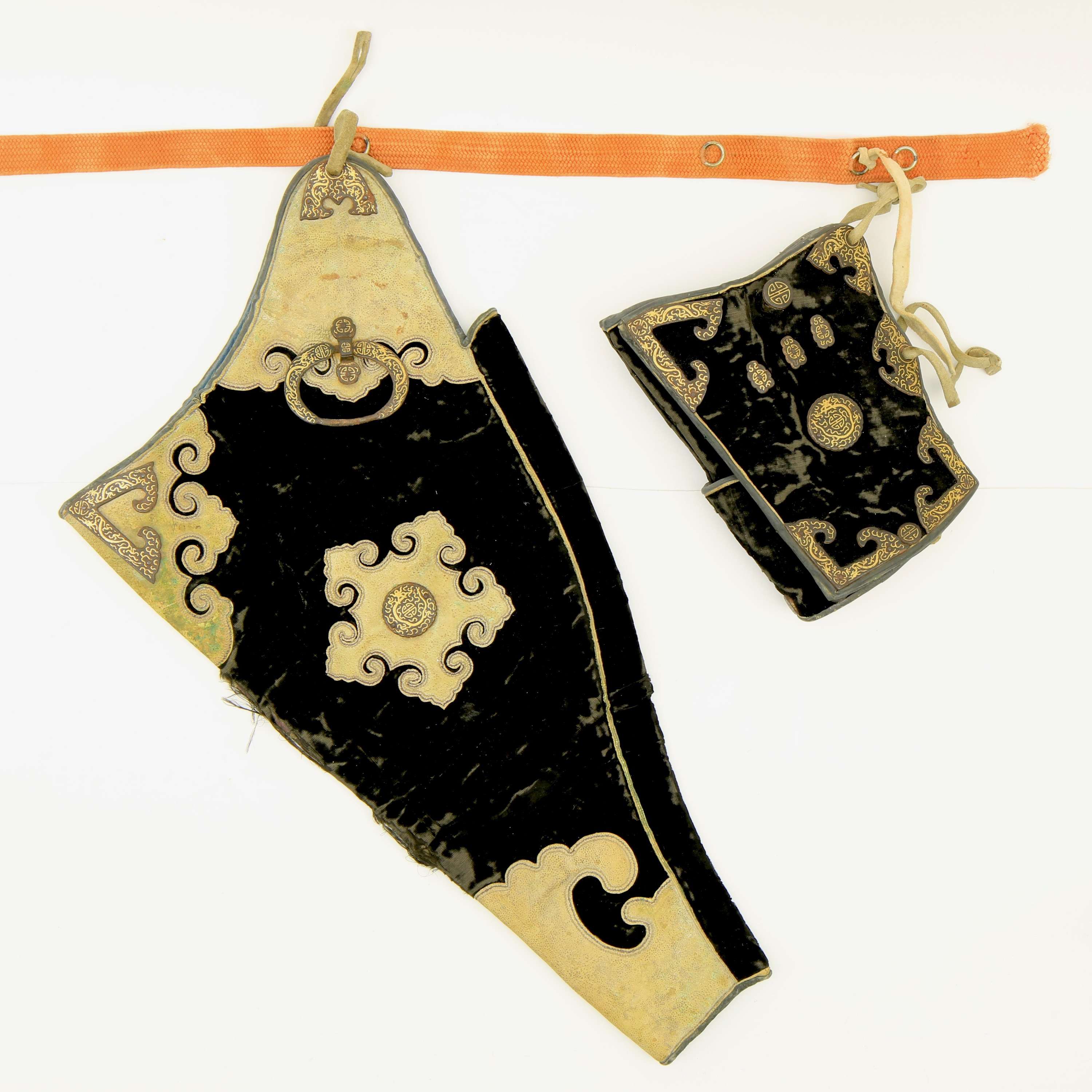