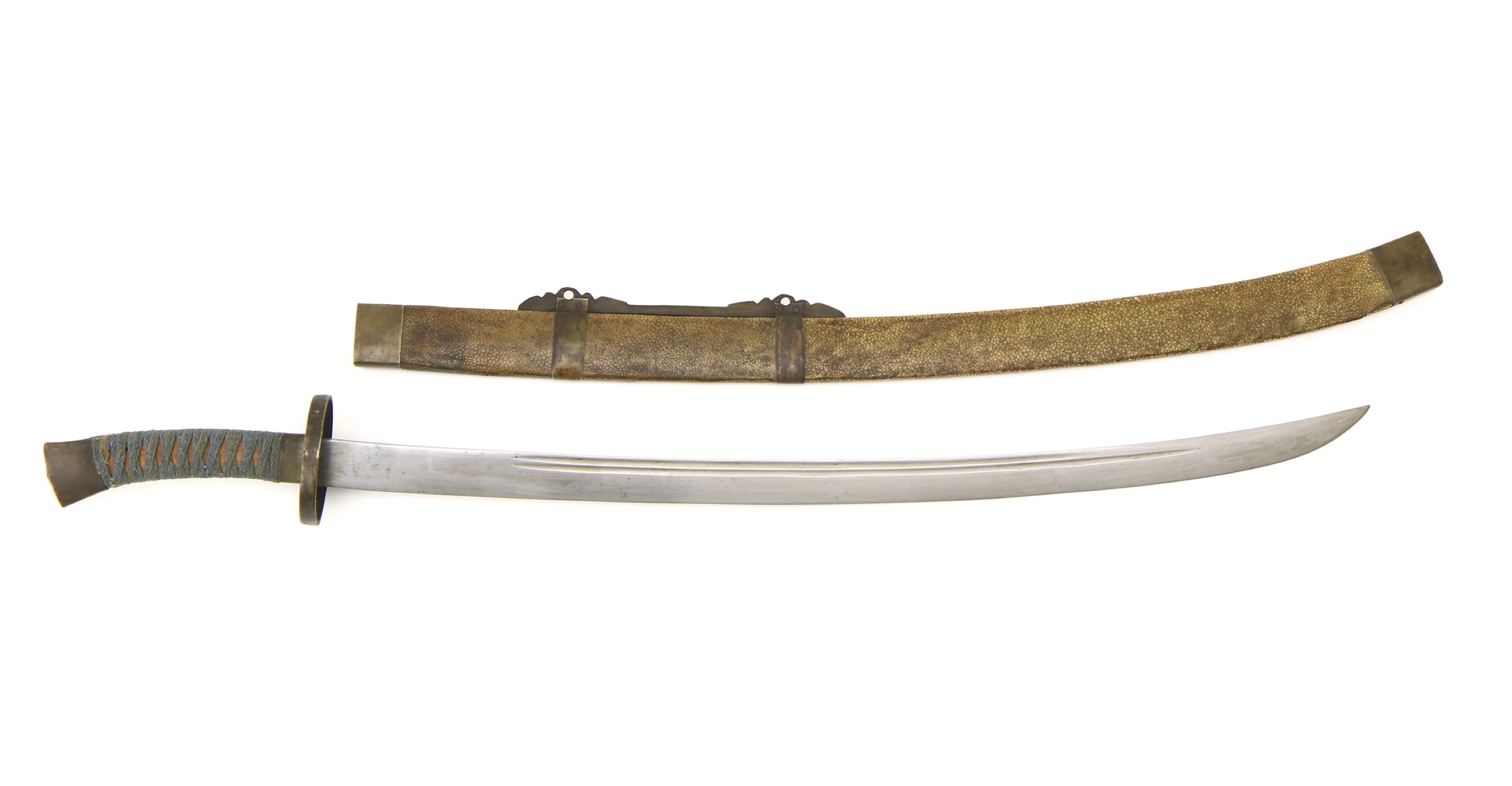 From the beginning of the Qing dynasty, its military sabers were fitted with a grip and scabbard with flat sides and an elongated trapezoid cross-section and mountings following this general shape.

By the mid 18th century a new style emerged with an oval cross-section scabbard and grip and scabbard mounts with stylized cloud-shaped borders. At first, these were for certain elite units like the jiànruìyíng (健銳營) and certain ranks of imperial princes but in the decades to follow it tricked down to the rank and file and became the prevalent Qing military saber style worn by all common soldiers.

An exception was the Manchu elite in Beijing, some of which clinging to fe doro ("the old ways") and the old Manchu warrior ethos, there is evidence that shows some of them kept using the original angular style. 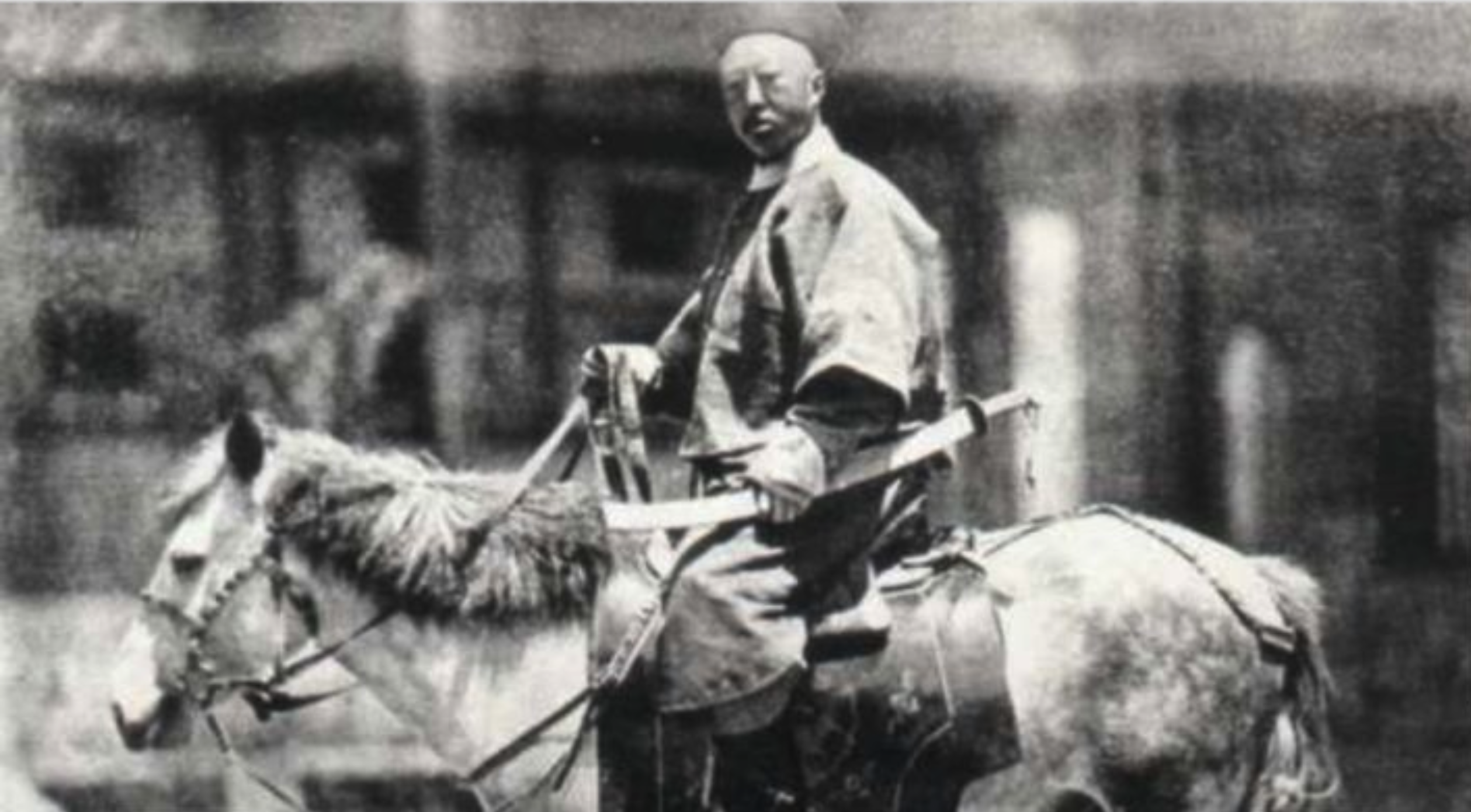 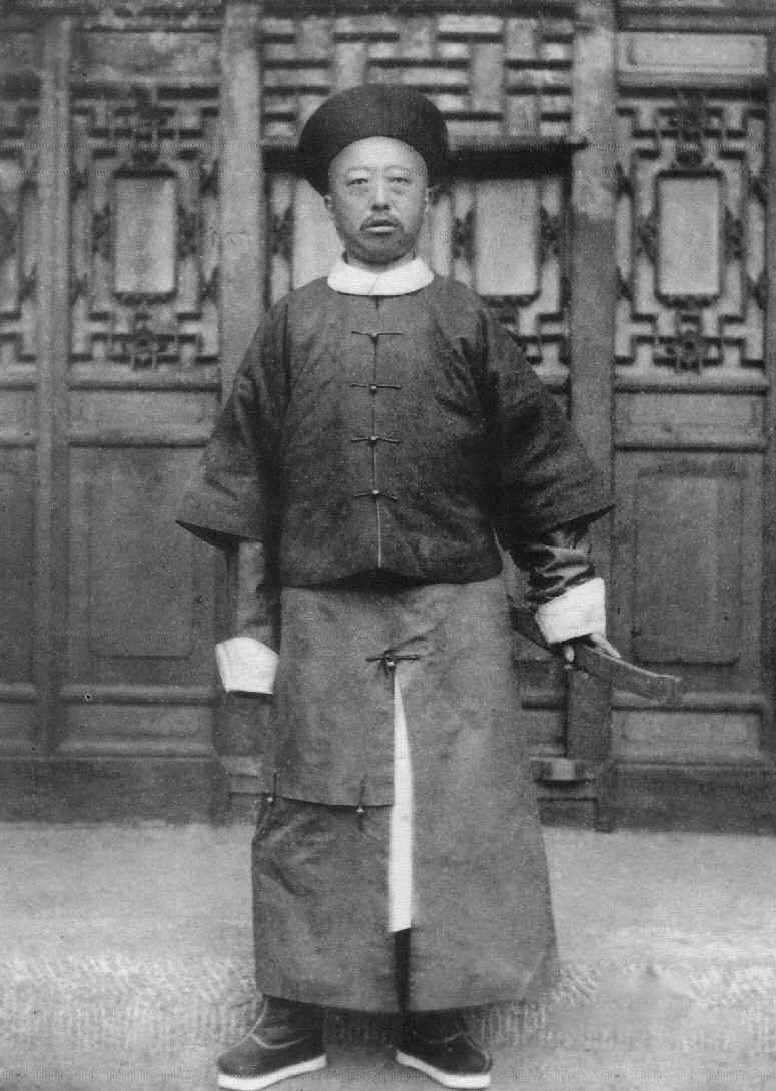 The saber worn by Prince I-Huwan in the above photos is surprisingly plain, with mounts of simple sheet metal much like ours. This may seem strange, as princes were entitled lavish sabers with openwork gold mounts and the use of precious stones. But not all that were entitled such items made use of it. The Manchu ideal was that of the frugal warrior and some Manchus were keen to show this aspect of their personality.

On top of this, I-Huwan deliberately tried to keep a low profile. He was the father of the reigning emperor with which came grand titles and a level of power that he was uncomfortable with, especially since the volatile Cixi was the de-facto head of state. He resigned from most court duties and declined positions where he could, but could not prevent himself from remaining one of the most powerful people of his time.

With this in mind, it makes sense he didn't choose to display himself with the grandeur that was entitled to him.

A Qing military fāngshì (方式) or "angular style" saber of the middle of the 19th century. It comes in a ray-skin scabbard with mounts of sheet brass. The hilt consists of a cast brass cup-guard and sheet brass pommel and ferrule. The grip was wrapped with old indigo blue cord, now faded to a pale blue-green.

Everything is simple, elegant but well made for a Chinese military saber. Notice for example the seem in the ray-skin which is neatly hidden on the bottom inside corner of the scabbard.

The modest mounts hold a blade that is surprisingly good. Starting at a hefty 8mm at the base, it tapers down to 4 mm in the center for good, weighty feel and a lively balance. Handling characteristics are excellent.

The blade is relatively narrow throughout, blunt by design for the first 20cm at the base, then presenting a hardened edge that is very sharp up until the tip. It has two narrow grooves on either side, the upper groove stopping earlier up the blade to make way for a back bevel.

The blade, in current condition, shows very subtle signs of forge folding. It is probably made with an inserted high-carbon edge as they all tend to be. The quality of the forging is exceptional, with no forging flaws or cold shuts of any kind.

In excellent condition. Chinese sabers rarely come in this good a shape. Virtually no losses to the ray-skin scabbard. Blade was lightly cleaned by Philip Tom and has no pitting, no signs of excessive grinding, etc. One very small nick, about half a mm deep.

The old grip wrap was in decay and with parts missing so I replaced it. The cord I used came from an old Qing military saber I once repaired, so it is of the period, and the wrap used was the same as the one I found the piece with.

Grip is tight, but there is a tiny bit of play in guard and ferrule but only if you apply pressure. It doesn't rattle. This kind of play is common, and caused by the wood of the grip shrinking, giving each part more space.

Original peening at the pommel is still intact.

At first glance it is much like the sabers used by the Manchus and later entire Qing armies of the 17th and 18th centuries, but small details betray its later origins. To sum up:

-The use of wide, sheet brass scabbard bands for the suspension bar, that are attached with two rivets each. On earlier fangshi, they would be thicker but narrower and secured with a single rivet each.

-The shape and profile the scabbard mouth and endpiece; on older fāngshì they tend to have a narrower profile.

-Shape of the pommel; higher than older fāngshì tend to be, and a slightly different profile with less of a radius at the top.

The blade is surprisingly good, more akin to what we are used to seeing in the 18th century, but some aspects of its design remind strongly of standard pattern Qing military sabers, (see a previously sold example) it is just a little more refined.

A rather nice example of a Qing military saber of the 19th century, mounted in an earlier revival style mounts that remained popular among the Manchu community in Beijing.

It is in very good condition and comes with a blade that is a lot better than most Qing military sabers of the period. 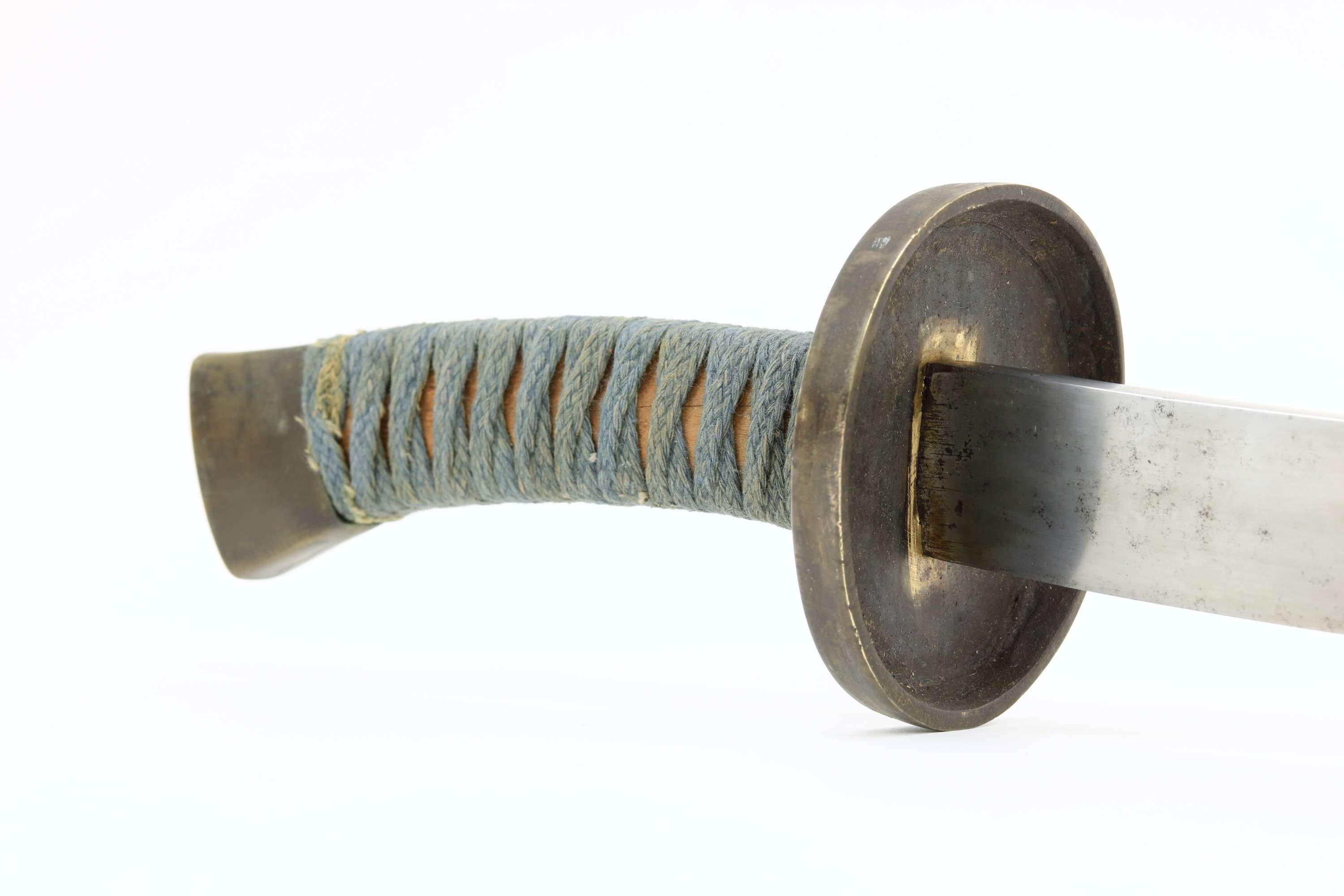