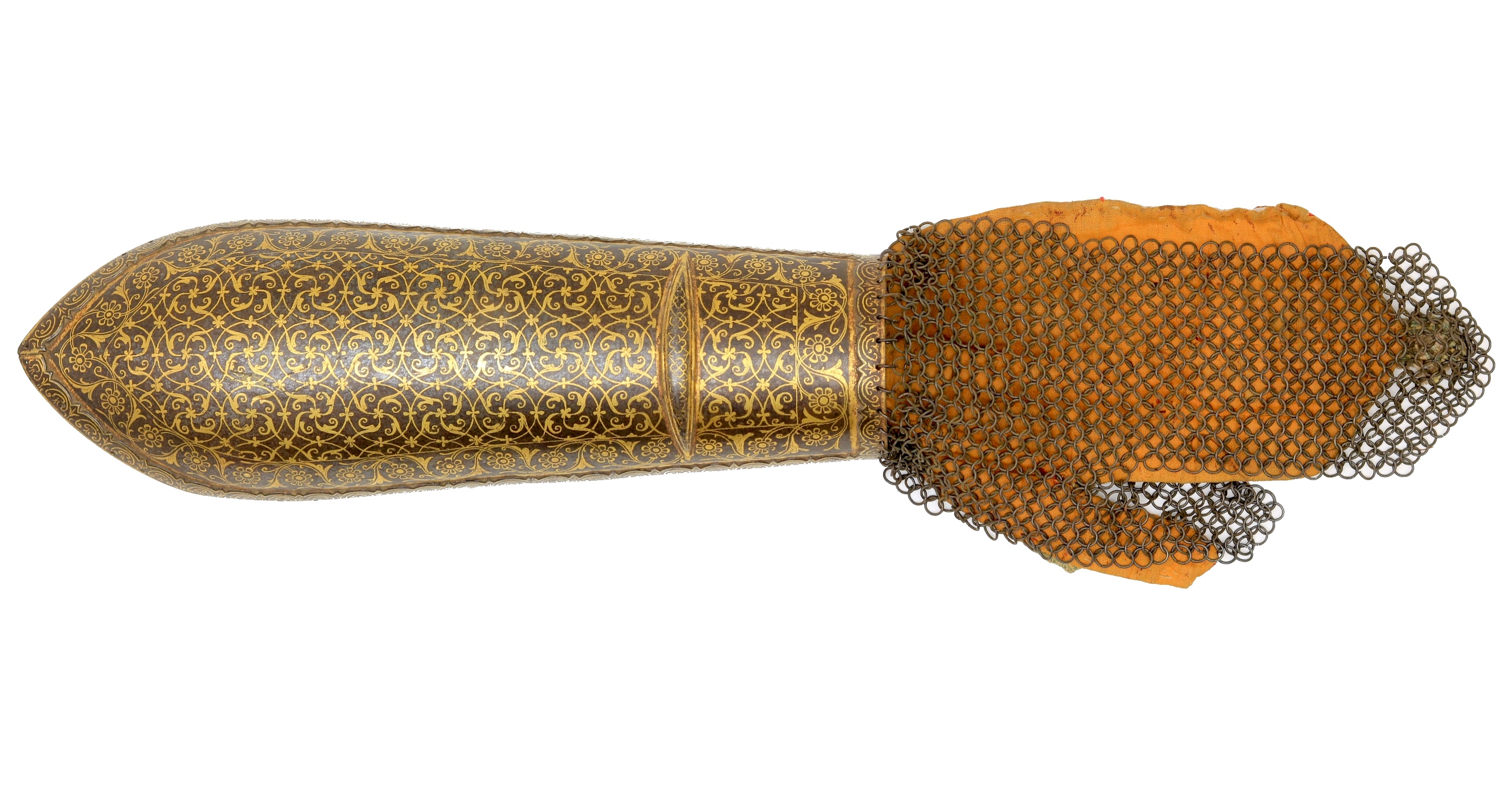 Called bazuband (بازوبند) in Persian and dastānā (दस्ताने) in Hindi, these are pieces of lower arm protection that were worn in much of the Islamic world and northern India, all the way down into the Deccan. It encloses the wrist and elbow with a steel plate and usually has a protective mitten attached to it for the hand. The whole is lined with fabric padding. They close by inserting pins in the hinged sections on either side of each element.

A nice example of the outer protection for the lower left arm, consisting of an elongated dish of steel with a mail mitten attached. The piece is of classic form for these, with a pointy top at the elbow and a raised rib above the wrist, something is also seen on the gauntlets of pata swords. On the inside is red velvet padding. Inside the mitten are loops to secure this part to the fingers.

The edges are reinforced with a steel border with a decorative serrated top. The whole is decorated with a fine gold overlay, consisting of patterns of flowers around the edge that frames the main decoration that consists of a series of stylized swastikas.

The plated part is in very good condition with only minimal wear to the gold. Some wear and tear to the more fragile lining. The finger rings inside the mitten are not well attached anymore, and so is the mail on the outside what used to be sown to the mitten. These are expected issues and very easy to fix. The wrist section is missing.

Patterns with swirling lines forming circles like seen here are typically Persian. This design features a pattern where each circles contains a stylized swastika. I've seen it in carvings and stone work in the old silk road town of Bukhara, present-day Uzbekistan. 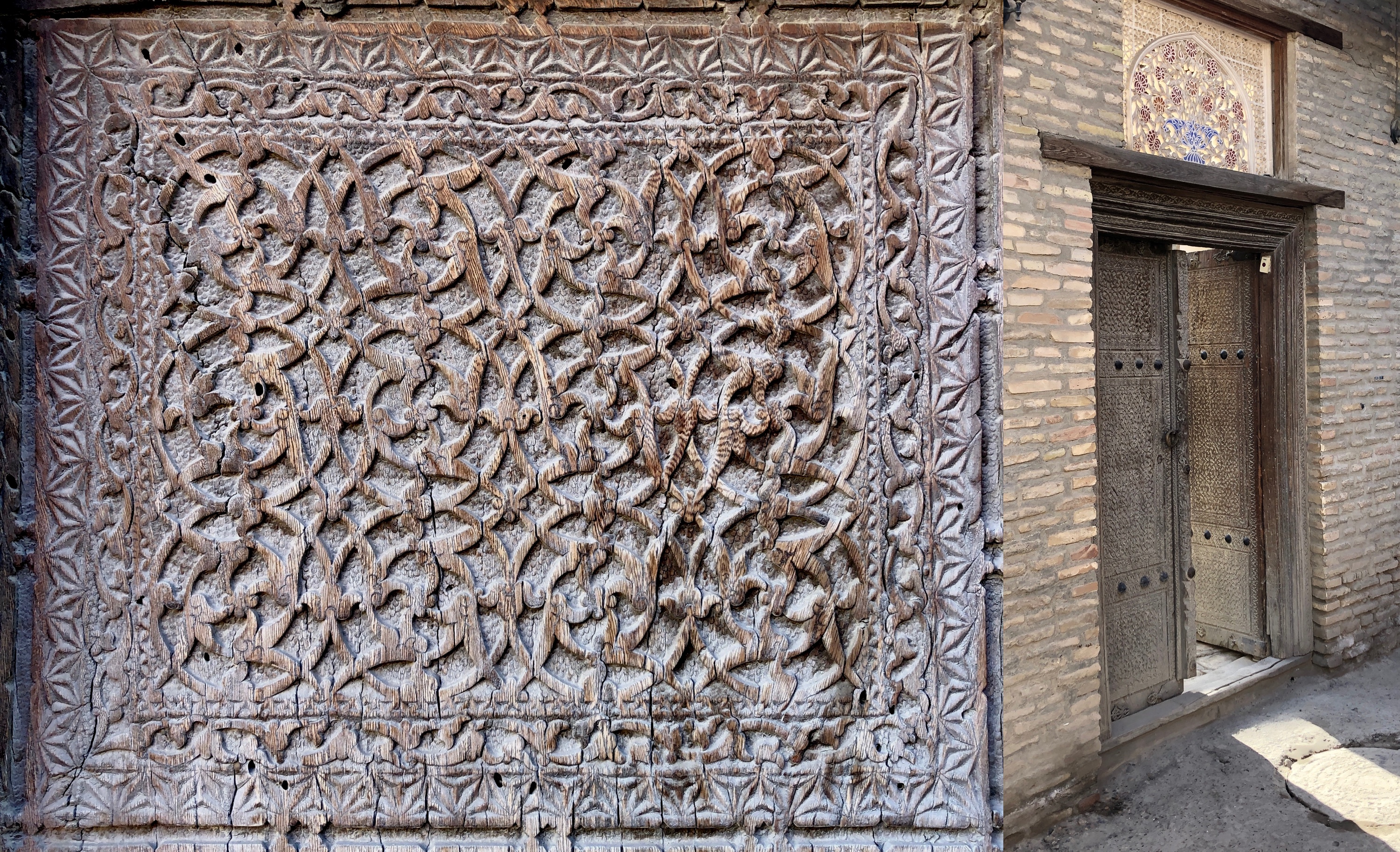 Persian style swirling swastikas on a door in Bukhara.
Photographed early 2020 by author.

Hendley illustrates a breastplate with such a pattern made in the Punjab and the cover of that book also features the same pattern.1 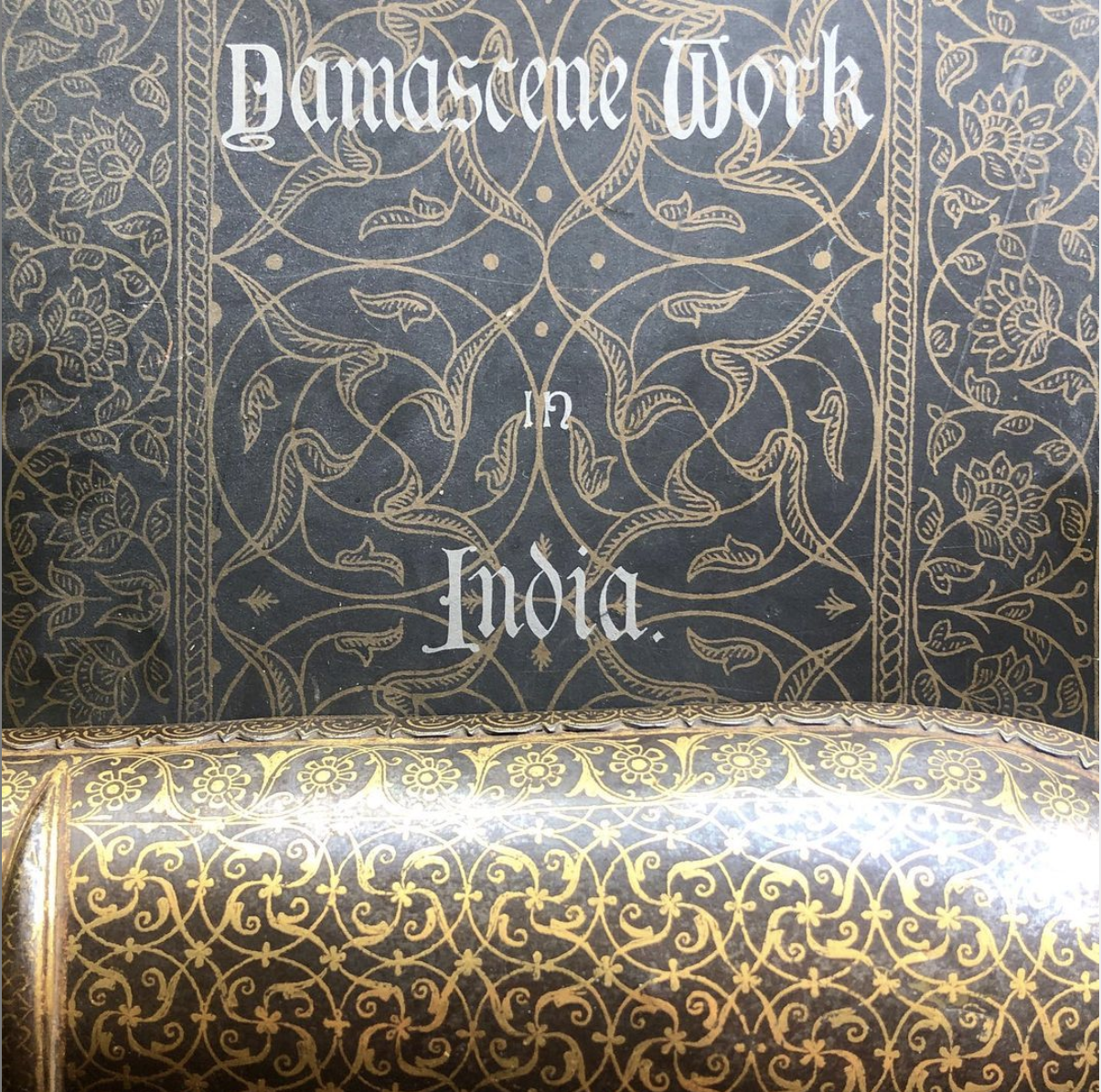 There is also a design for a sword hilt with a similar pattern in the collection of the Boston Museum of Fine Arts, accession number 17.2691 that is believed to be from "Lahore, Punjab plains, Northern India or Pakistan", circa 1800.

There is also an interesting photograph of Kishan Singhji Rawat of Bijolia, Rajasthan who is seen wearing a full set of armor decorated in this style. The dastānā he wears may be identical to our example. It could be that it was purchased from further northeast, or perhaps the style had by then also caught on in Rajasthan. 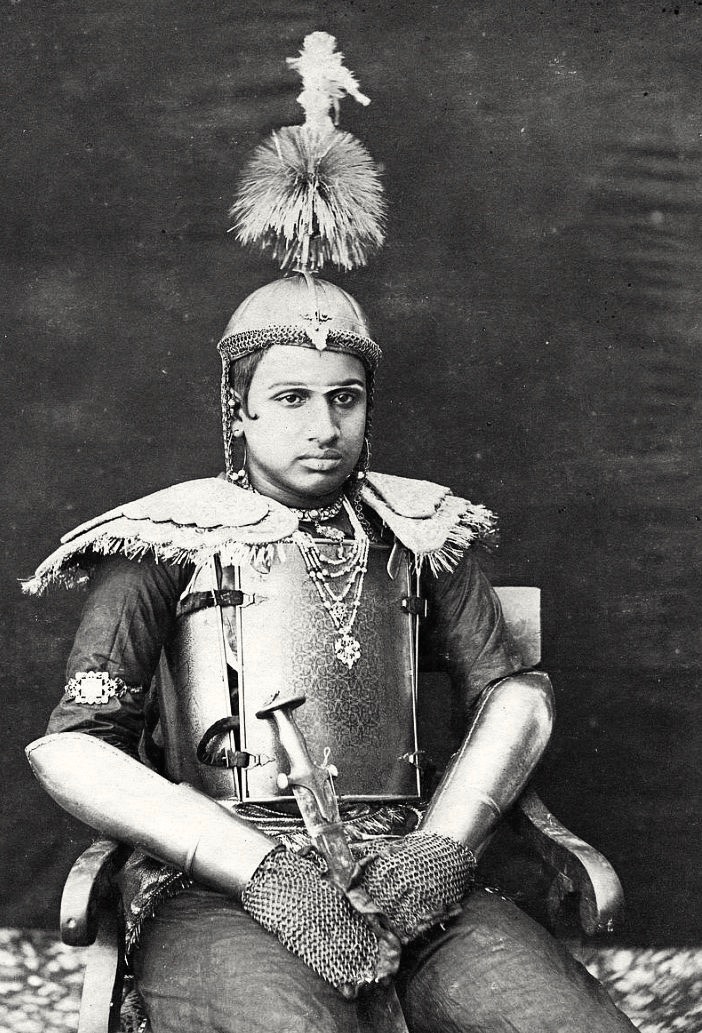 Another example of an armor set was published by Ricketts & Missilier in 1988, it was attributed to North India, 19th century.

The work on ours is quite good, with the cross-hatching being done precisely under where the gold should be applied and not elsewhere, giving the impression of it being true inlay. It was said that the best work of this kind was done in Lahore under Sikh rule, and quickly waned there after the fall of the Sikh Empire in 1849.2

Given the above I would tend to attribute ours to probably Punjab, Lahore, and Sialkot being the main production centers, and most likely dating from the first half of the 19th century. 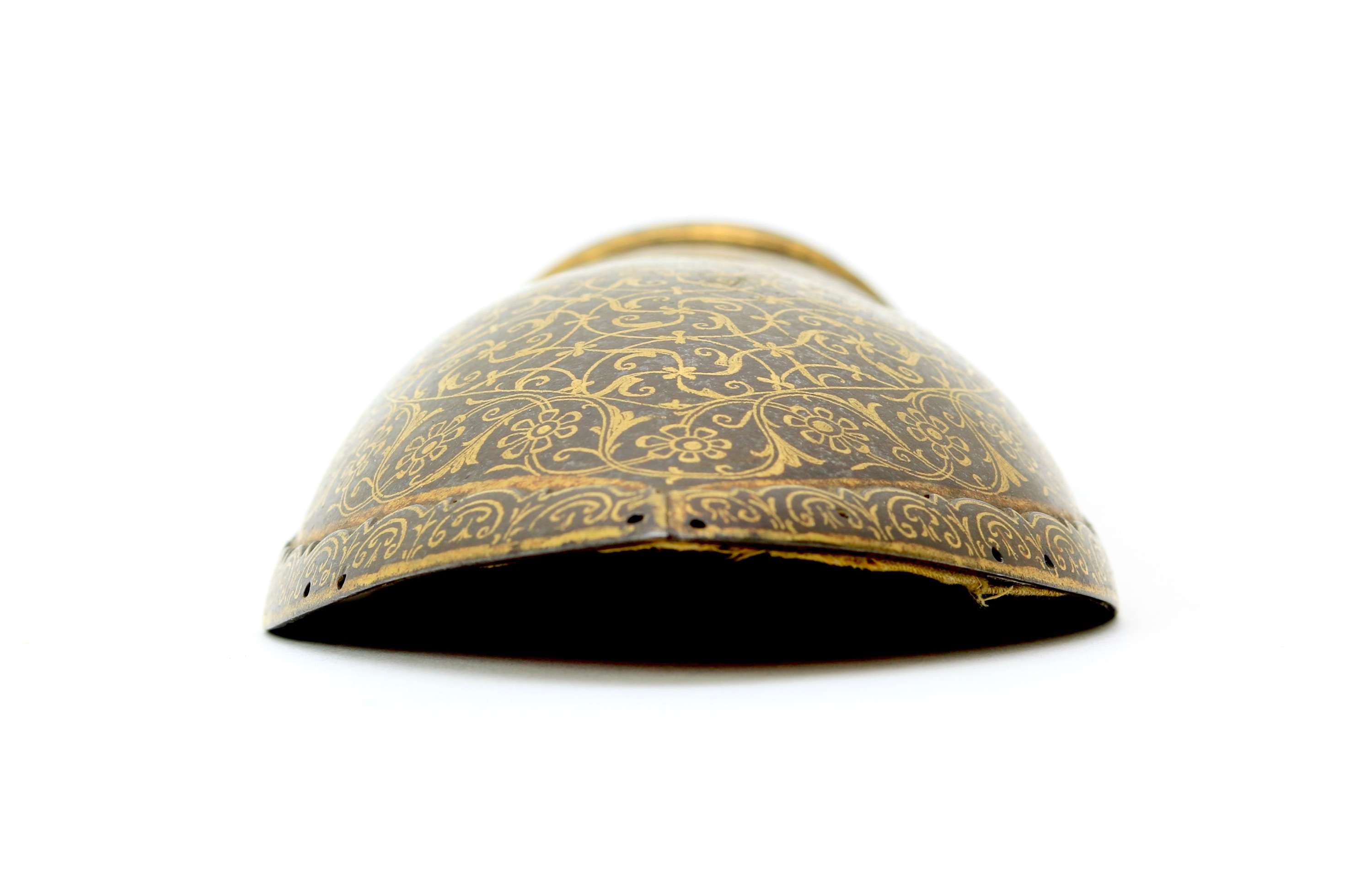 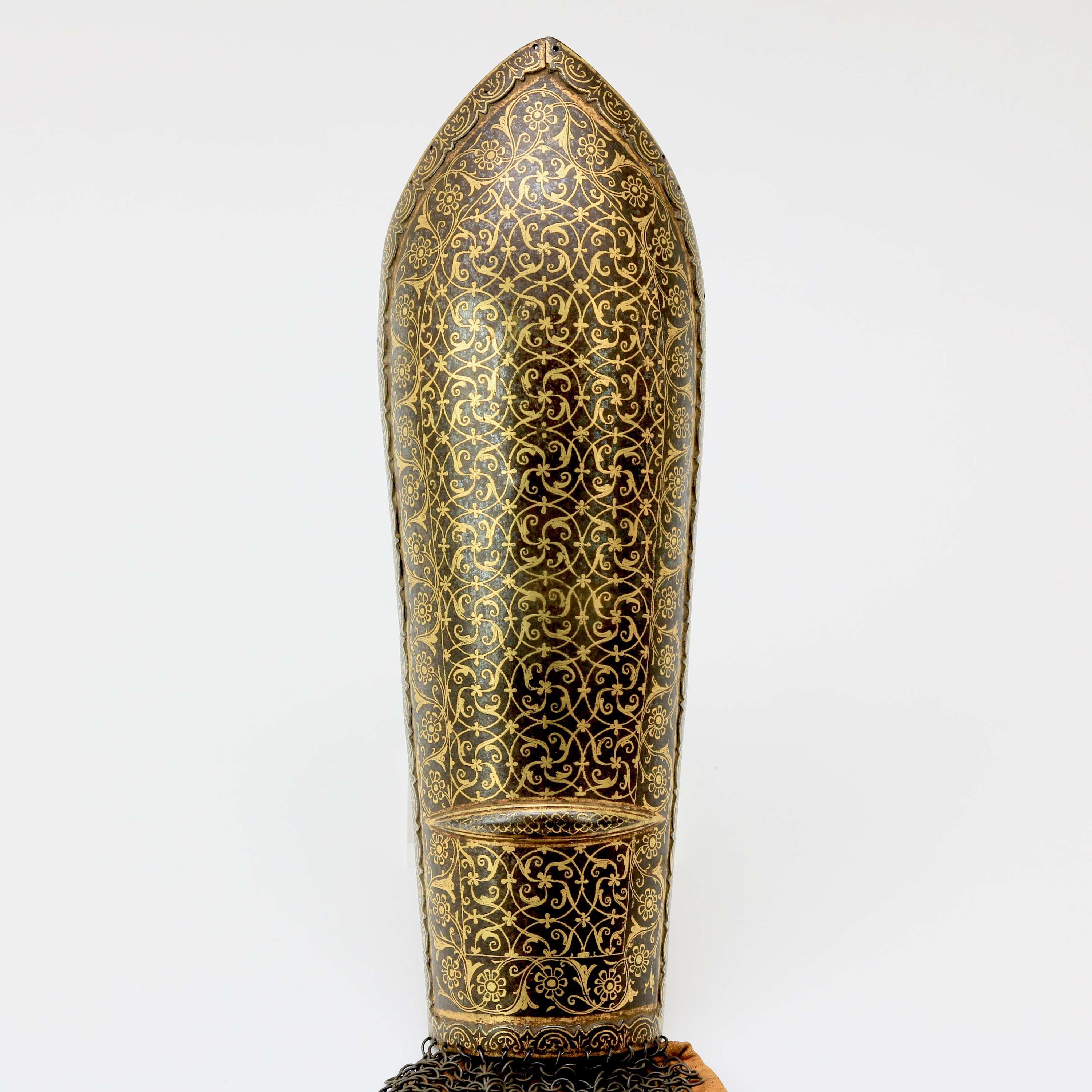