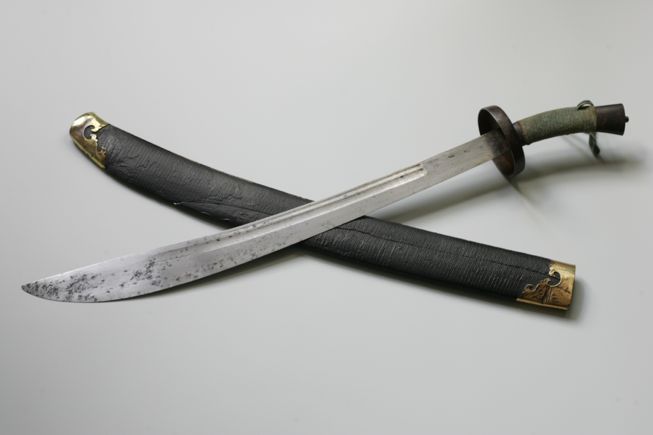 A late Qing dynasty niuweidao (牛尾刀) or "oxtail saber". These sabers originated in civilian circles somewhere in the 19th century and their widespread use among rebels and martial artists have made it known as the archetypical Chinese saber. They are characterized by having relatively thin blades that flare out considerably near the tip, where they have a rounder cutting section than other Chinese saber types. This design is optimized for cutting soft targets, something that reflected the disappearance or armor of Chinese battlefield when firearms became more widespread.

The blade of this saber is thin and wide, with a clear audible ringing tone when you strike the steel: An indicator of good steel. There are some hints of a forge folded construction, which would be standard on blades of this age. The steel is still in its original finish, with some speckles of now stabilized corrosion here and there. Its fullers are well-cut, straight and nicely shaped. It comes with rather well-made, sturdy iron fittings. The peened tang end visible through the pommel is still undisturbed: a sign that the hilt was never taken apart. The blade is currently not sharp, and may have served as a training or demonstration piece in the latter end of its life by street performing martial artists.

It comes with its original black lacquered resting scabbard with brass fittings, polished to their original gloss. The resting scabbard is purely that, a resting scabbard so it is without suspension fittings. The scabbard has lost its metal wire wrappings and has developed a long crack, but is still structurally fine.