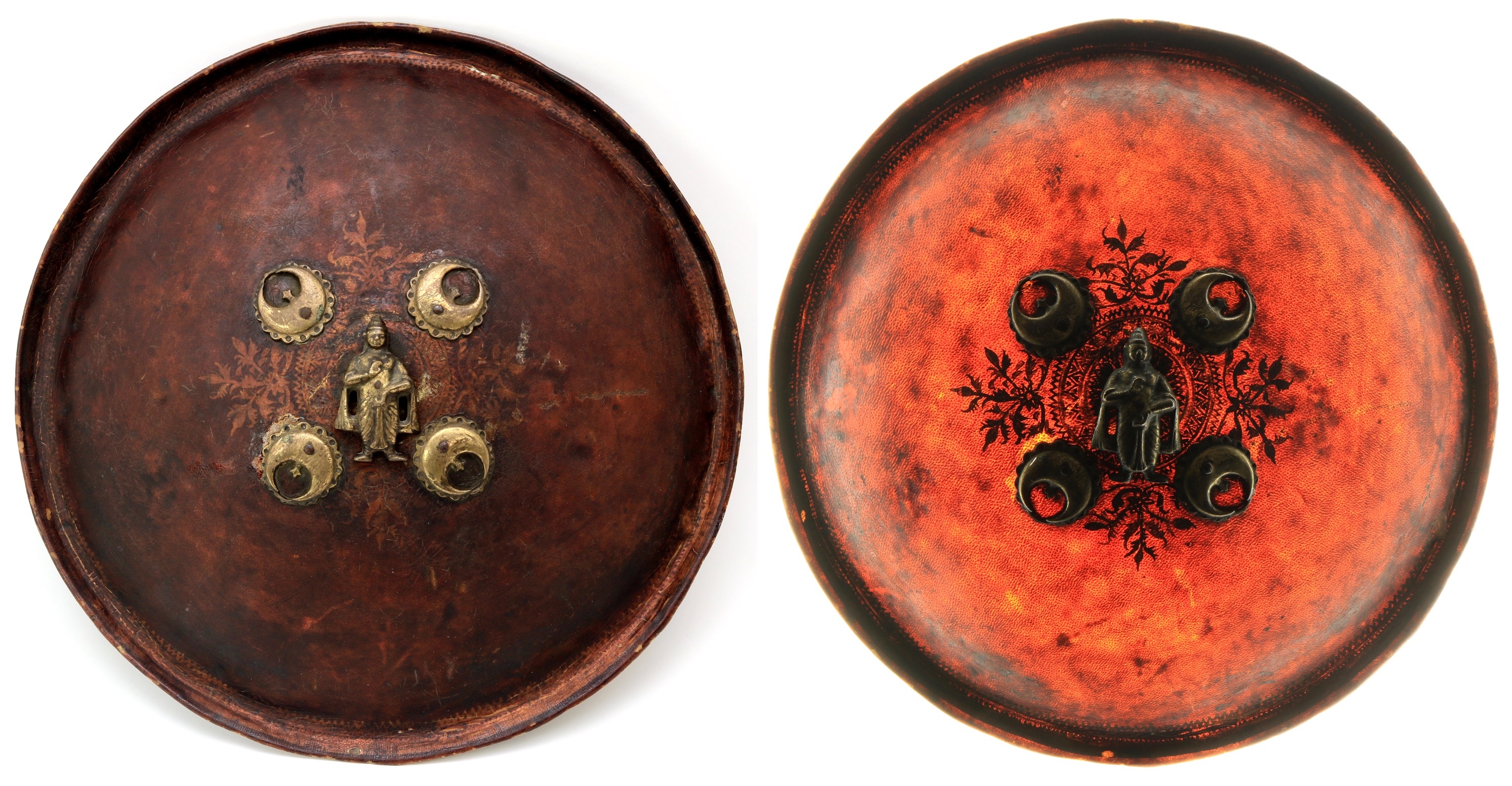 Made of cured translucent hide, it is of a pronounced dome shape with an upturned edge. From a functional standpoint, such an edge prevents a tip to slide off the shield, and Chinese sources stated it is in particular useful against arrows that could otherwise bounce off and do damage to a body part not behind the shield.

The shield is lacquered and decorated with gold lacquer in the form of geometric patterns around its rim and a circular ornament in the center with floral elements projecting in four directions. The gold decor is hard to see currently under a deeply tarnished outer layer of varnish. When shining light fro the back of the shield, it lights up a beautiful amber and the decor becomes visible in letting pass less light. See photos.

The most unusual element about this shield is the shape of the metal ornaments on the front. These are normally round bosses but in this case, consist of four crescent moon-shaped ornaments with a little projection in the concave side. Crescent moons rendered in this form are relatively rare but I have encountered them on pieces from the Ottoman Empire all the way to Japan. They are most commonly found, however, on the flag of Nepal and sometimes the shape is seen reflected in the notch on some Nepalese khukurī knives. 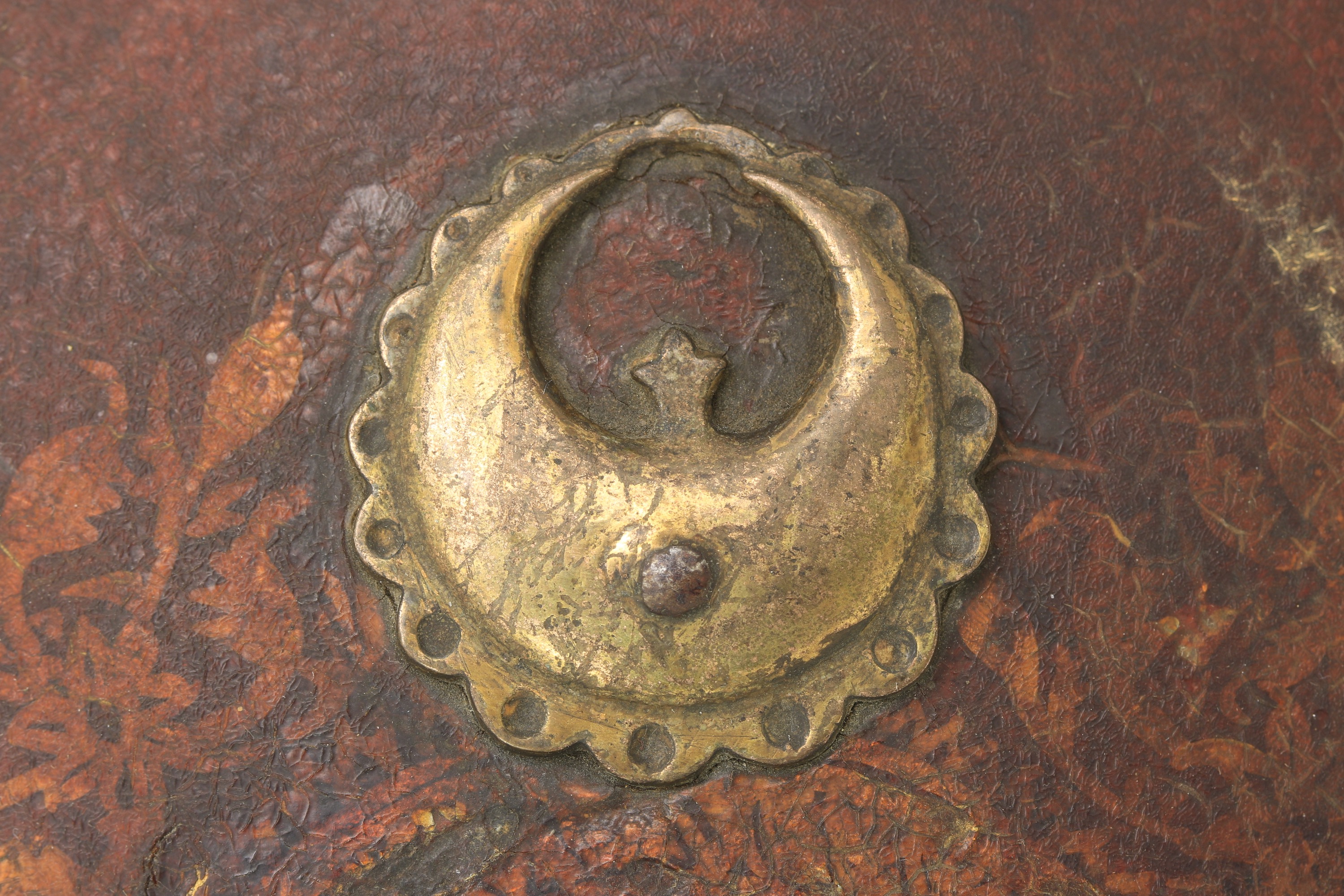 Stylized crescent moon on our shield.

Left: A 19th-century khukurī with crescent moon shapes stamp and notch, called kauro.
(Sold by Mandarin Mansion in 2020)
Right: the flag of Nepal as it was before 1962.

In the middle of these four crescent moons is a human figure, which is probably a somewhat unusual rendering of Shiva "the destroyer". I suspect it is Shiva because the crescent moon is strongly associated with this God of destruction, the moon's cycle representing the eternal decline and regeneration in nature. Shiva's destructive force is believed to be a necessary force that inevitably leads to regeneration, and his name was often uttered to clear a space of bad vibrations.

On the inside of the shield are rings that once held the straps by which it was held. Now, there is a piece of old fabric-insulated electrical wire that is used to hang the shield from the wall. Such wire was commonly used in European houses from around 1900 to the early 1960s so I left it on as to a hint of its provenance.

In decent condition. Some damage here and there, most of the damage seems very old damage. See photos. The crescent moon bosses still snugly attached. The figure in the middle can move a little.

The shield is probably Nepalese or made in one of the northern Indian states for a Nepalese client. I base this attribution on the shape of the crescent moons which are nowhere as ubiquitous as in Nepalese culture, and the fact that the only other shield I am aware of with such a figure as a centerpiece also features a number of khukurī. That shield was auctioned at Olympia Auctions, London, on December 6, 2017, lot 66. The image on that shield is more clearly Shiva.

The overall shape with the strongly upturned edges is something seen in Nepal and Bhutan, and several shields of this form are in the National Museum of Nepal. One features on the panoply of arms attributed to General Amar Singh Thapa (1759-1814).

Other shields of this general form are seen on a photo that circulates the web that supposedly depicts the The Royal Arsenal of Kathmandu, around 1864.

The golden lacquer and its application appear less Nepalese to me and more northern Indian, but who knows. Styles and craftsmen moved around.

With such an unusual piece that has no direct parallels, dating is hard, but I would say most likely the second half of the 18th to the first half of the 19th century. 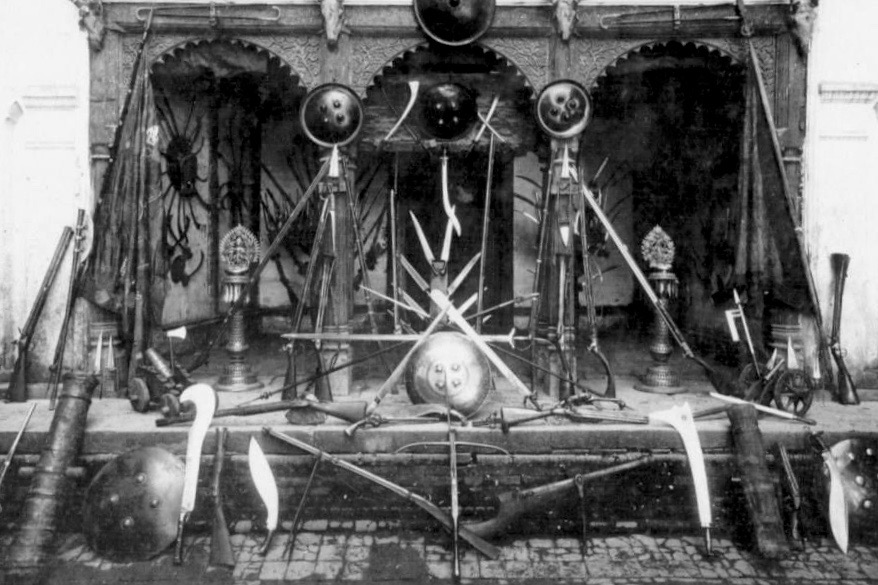 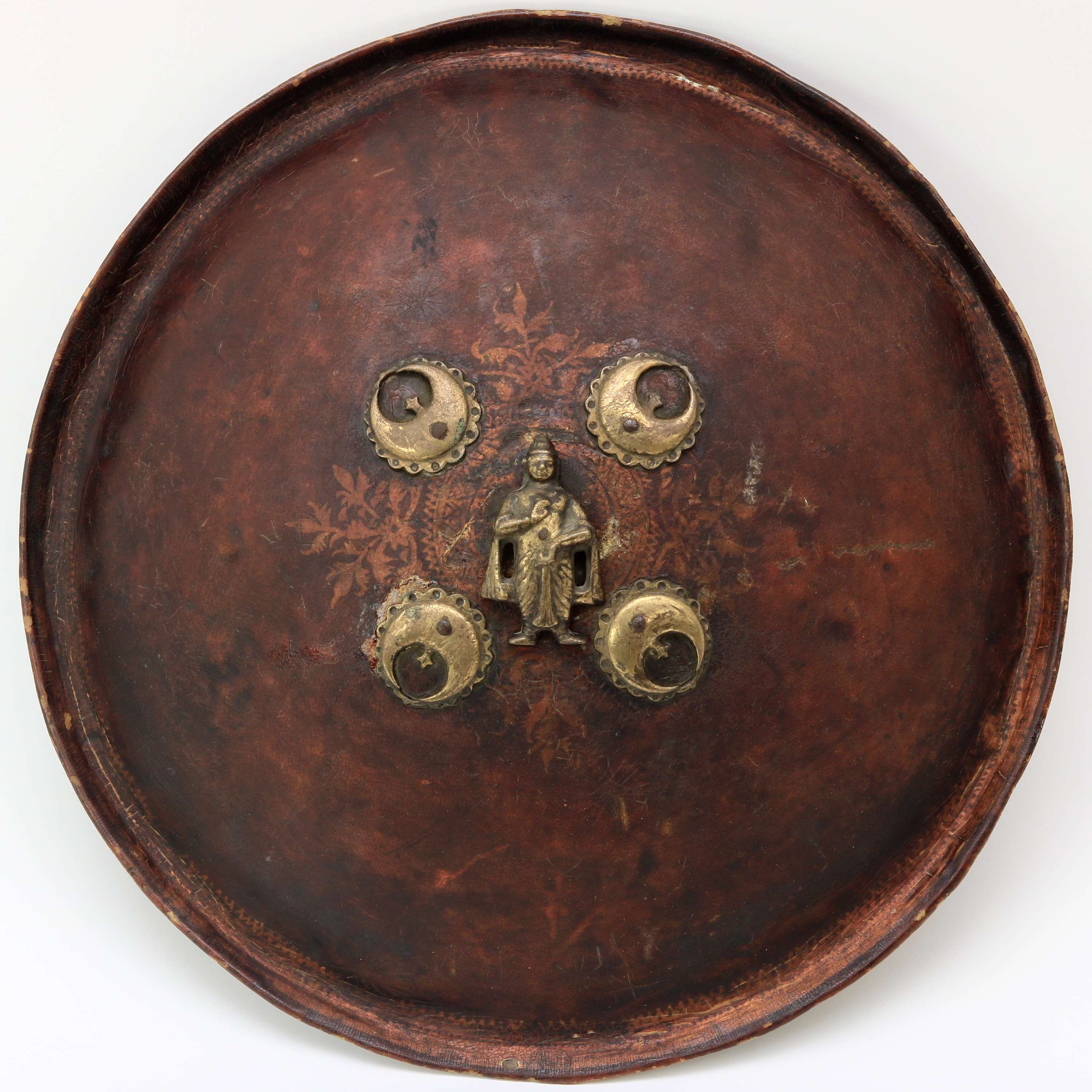 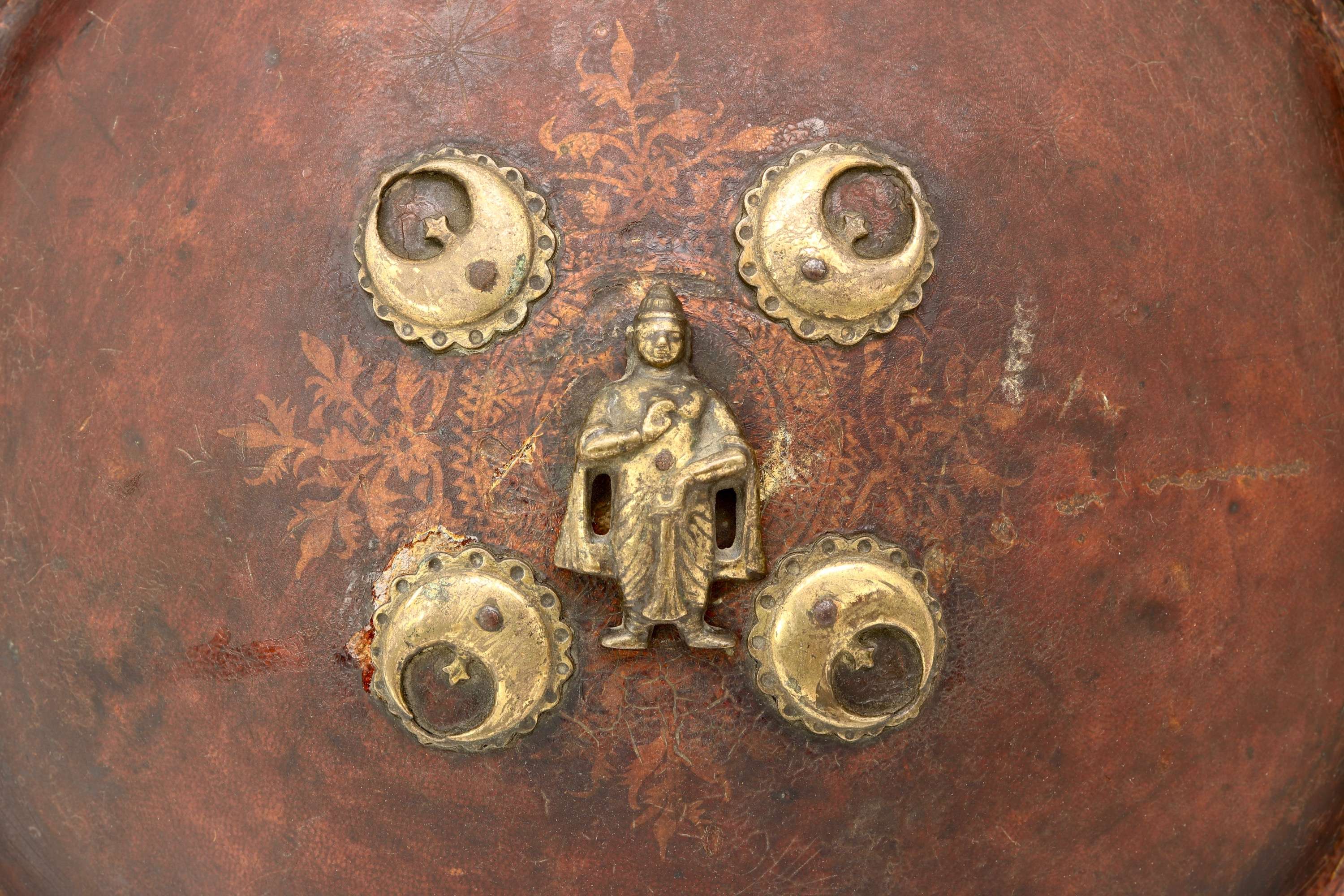 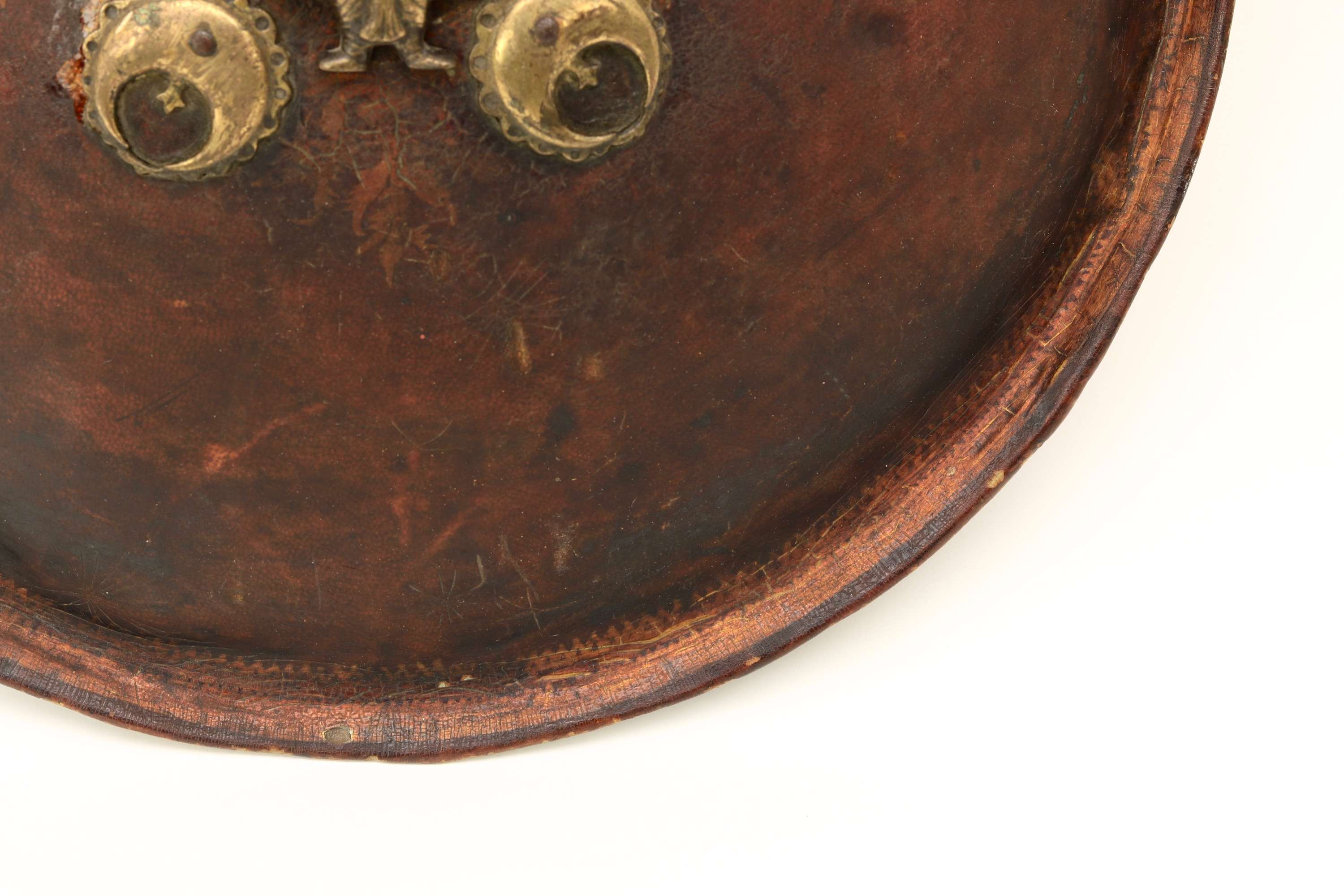 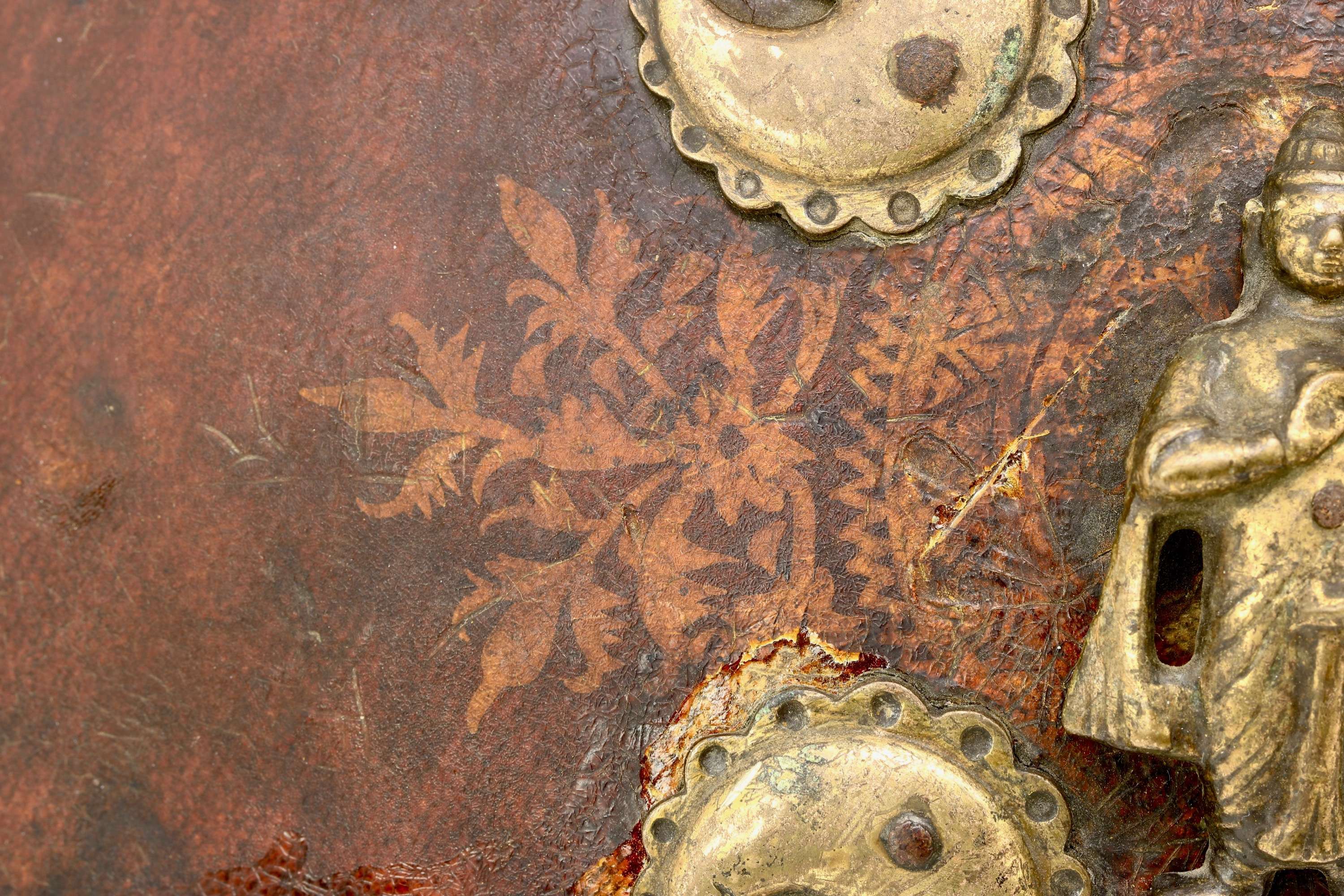 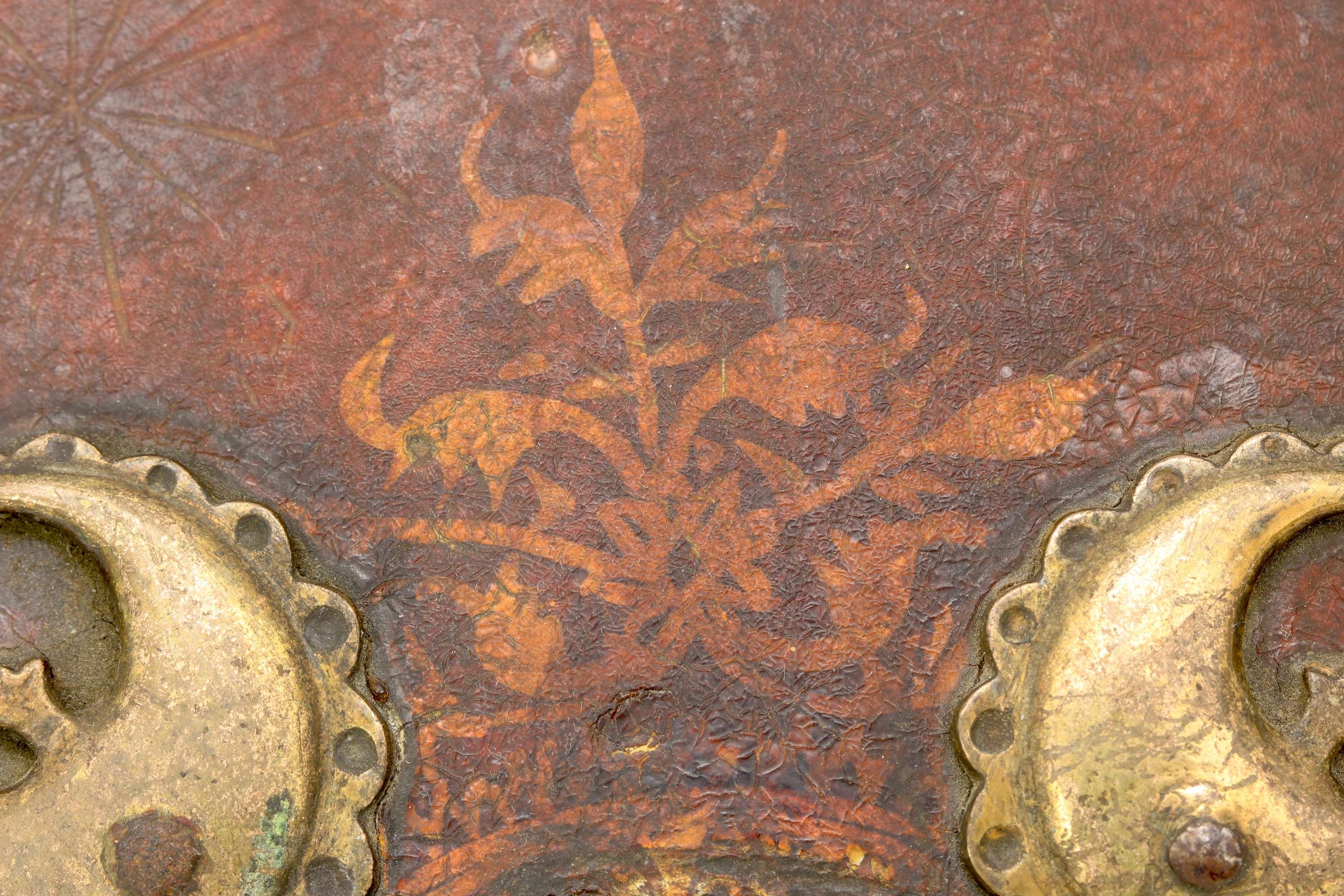 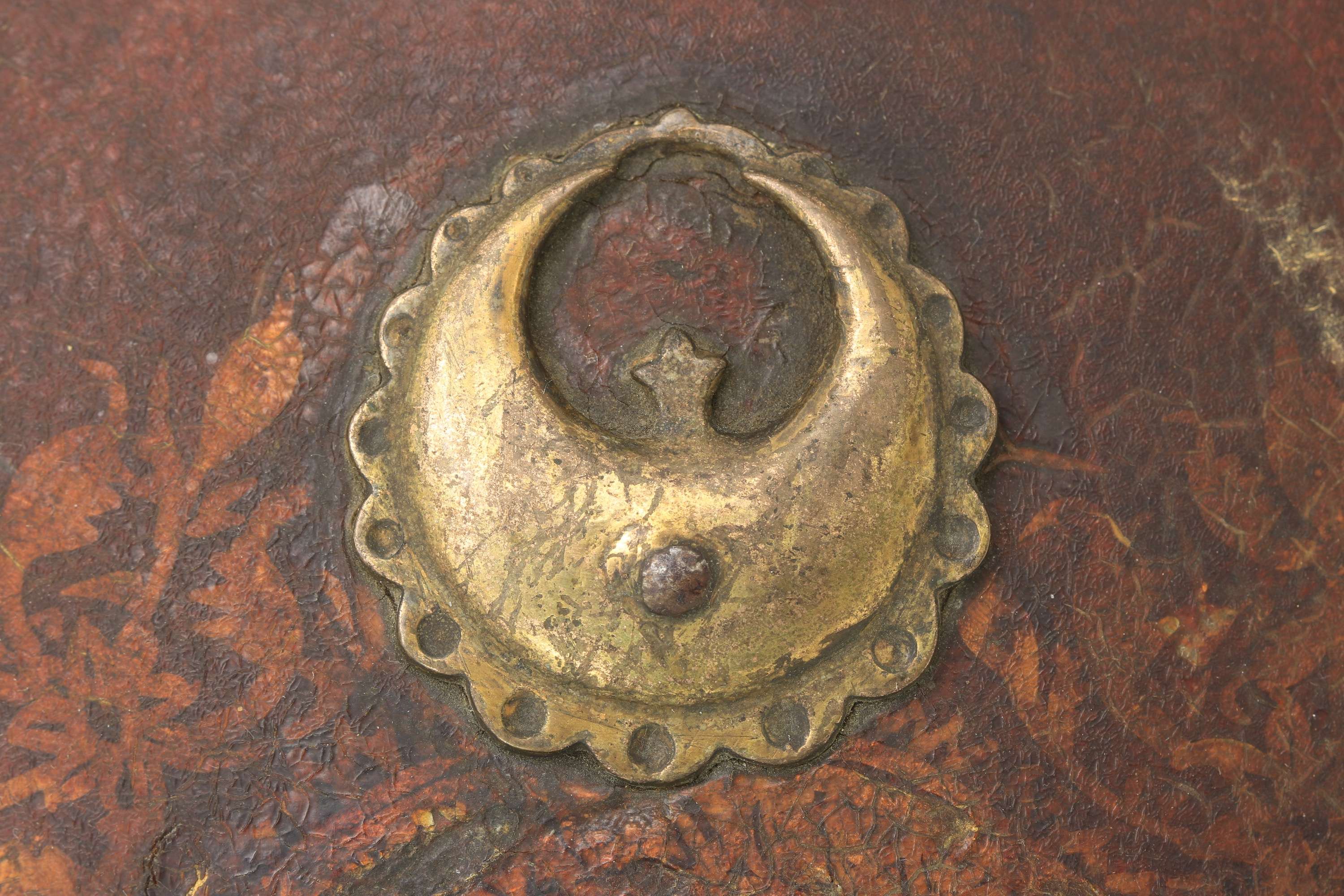 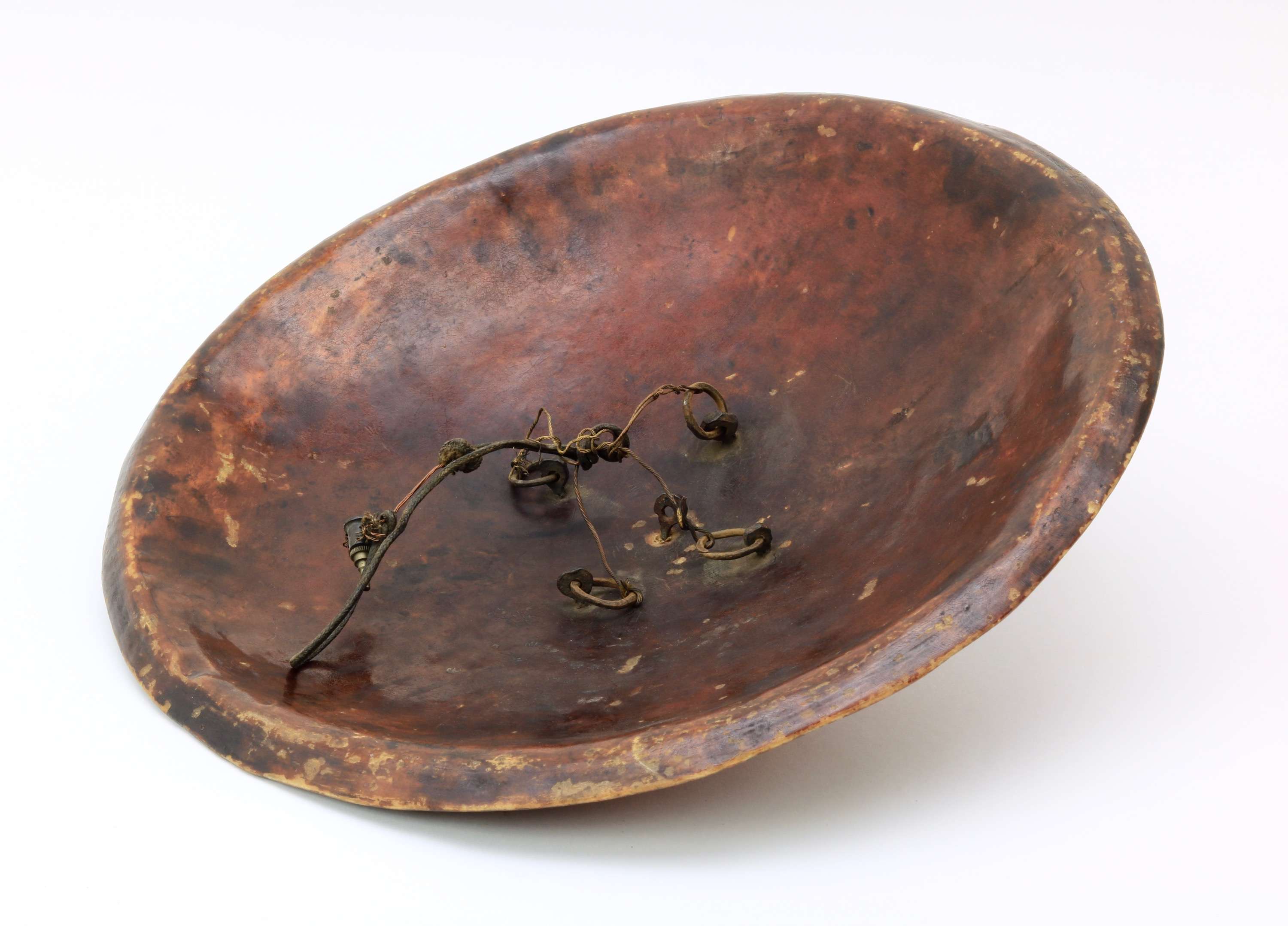 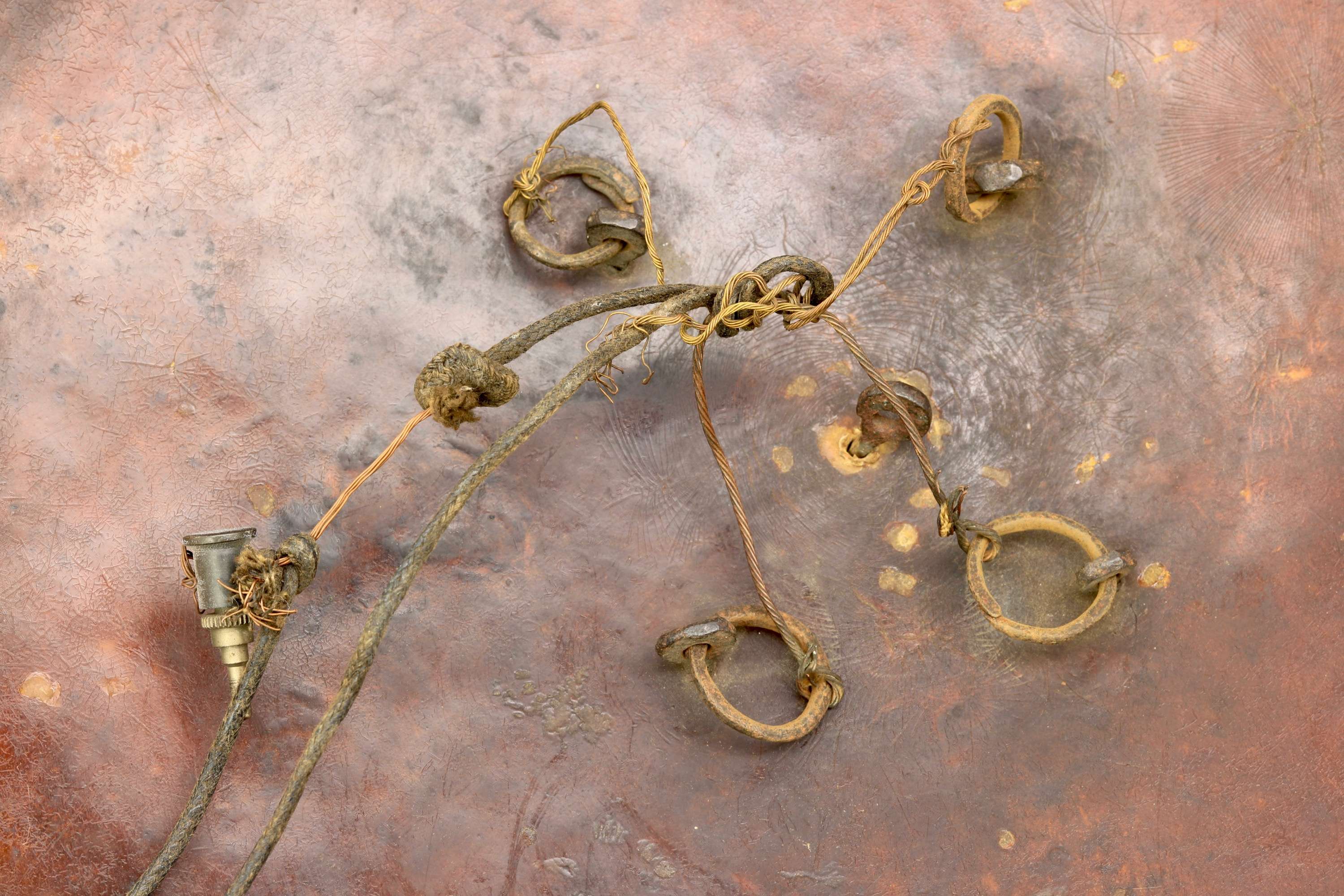 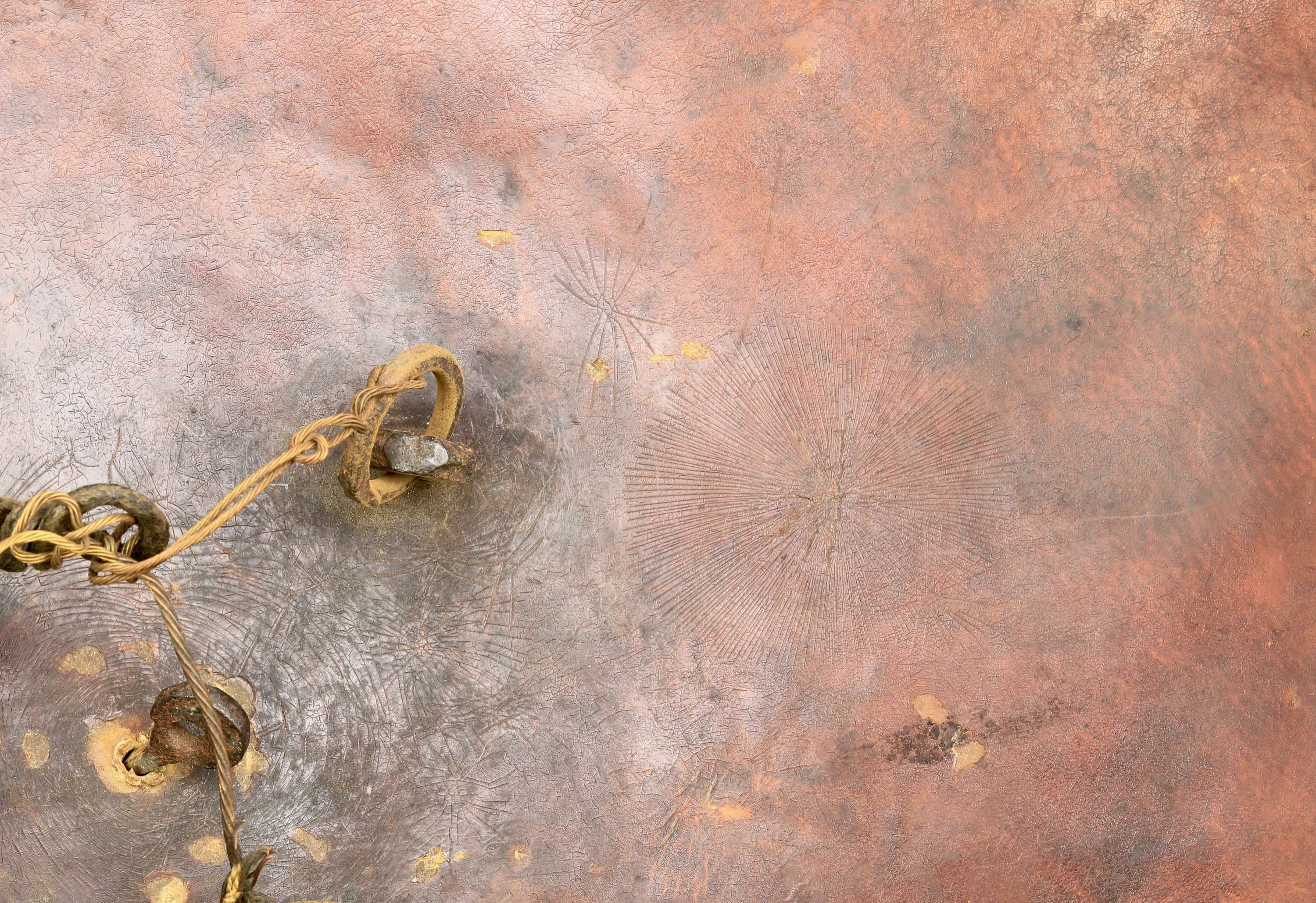 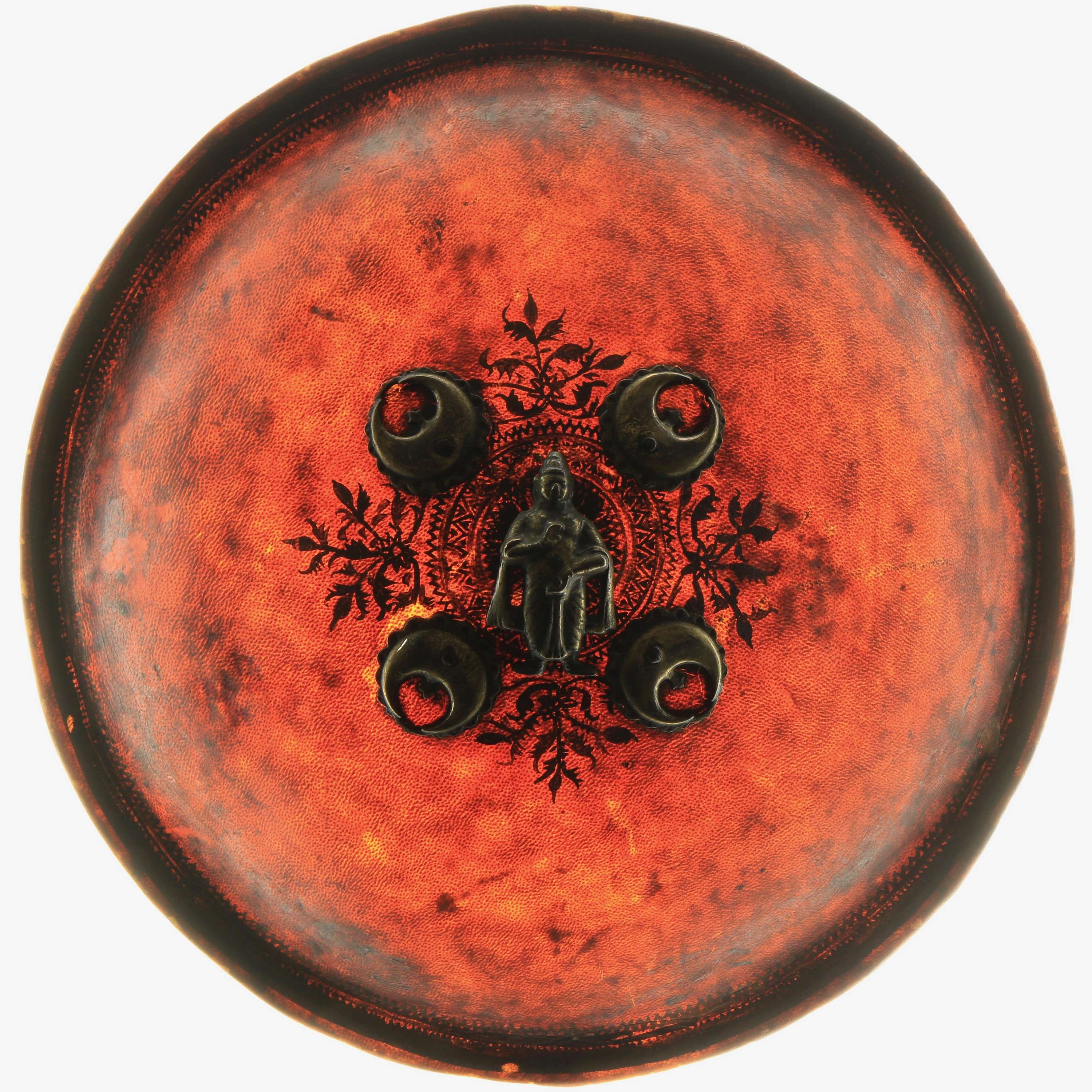 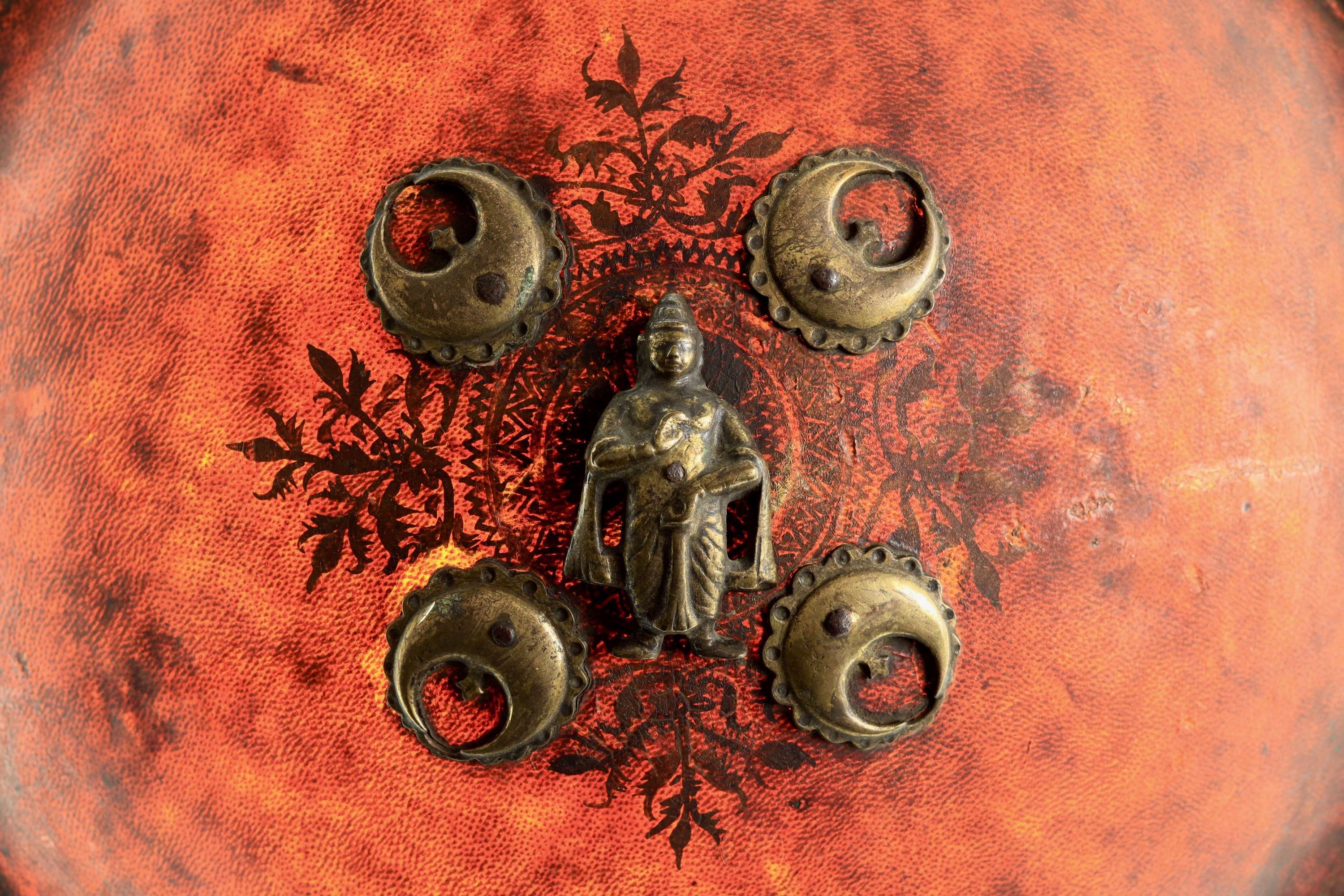 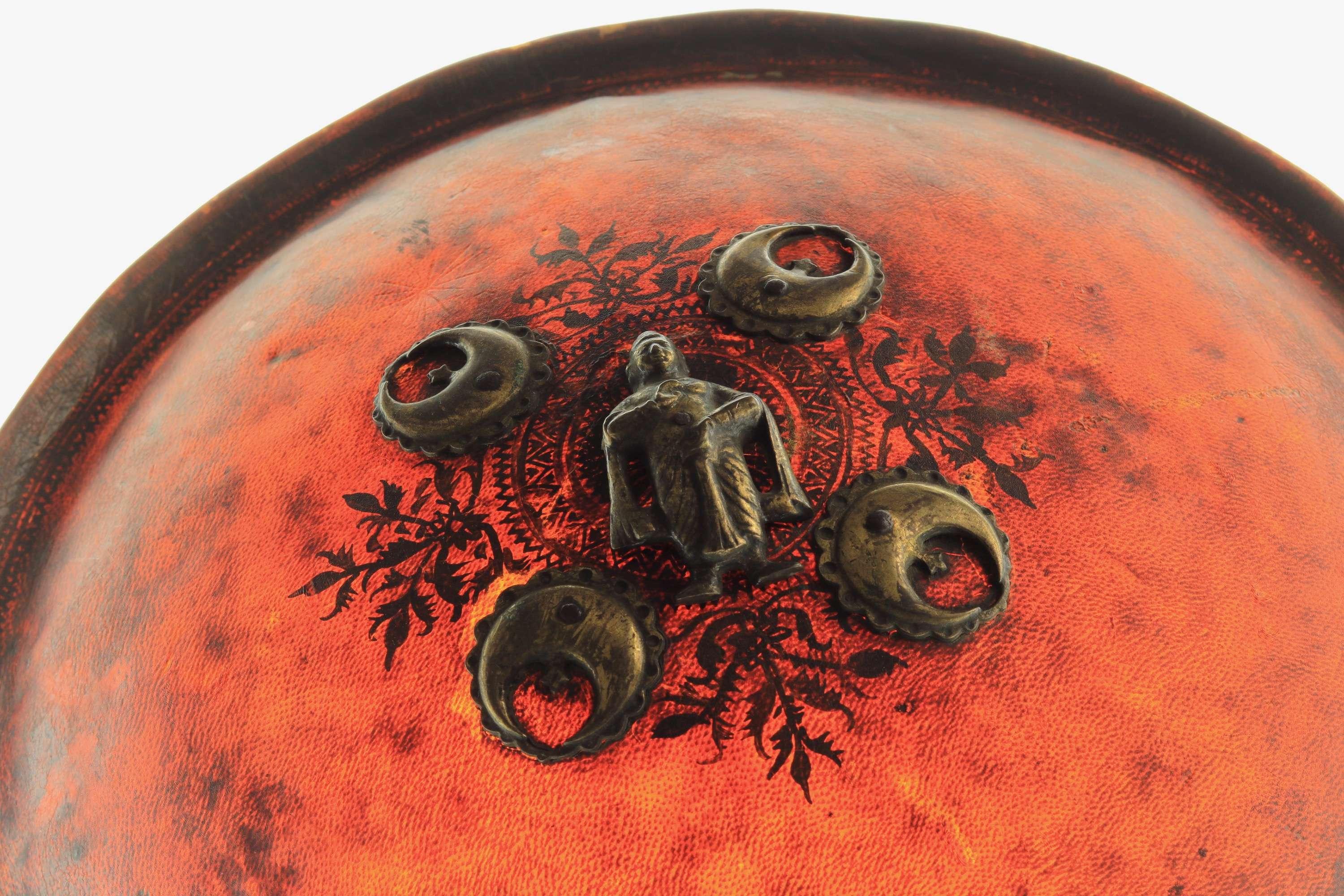 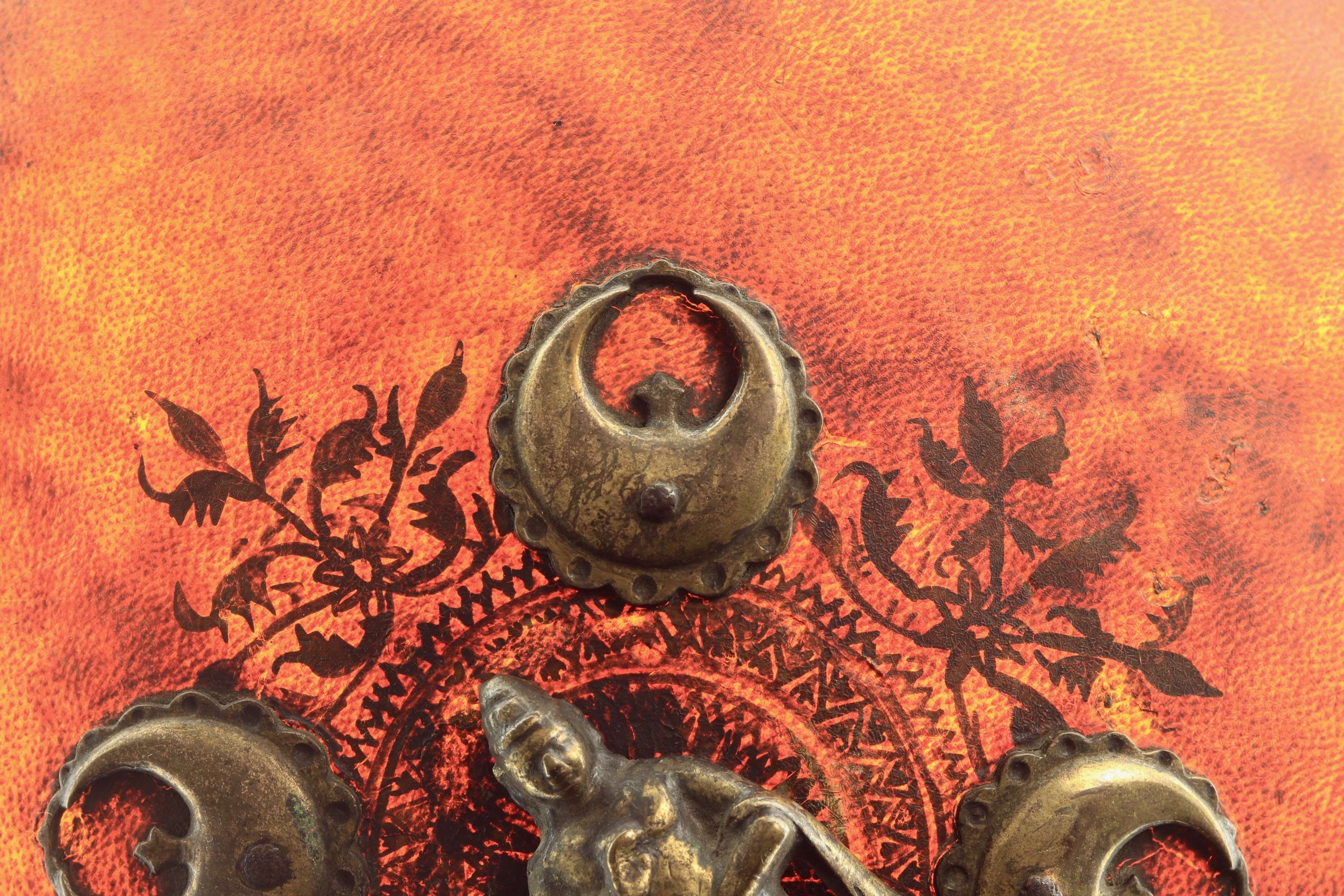 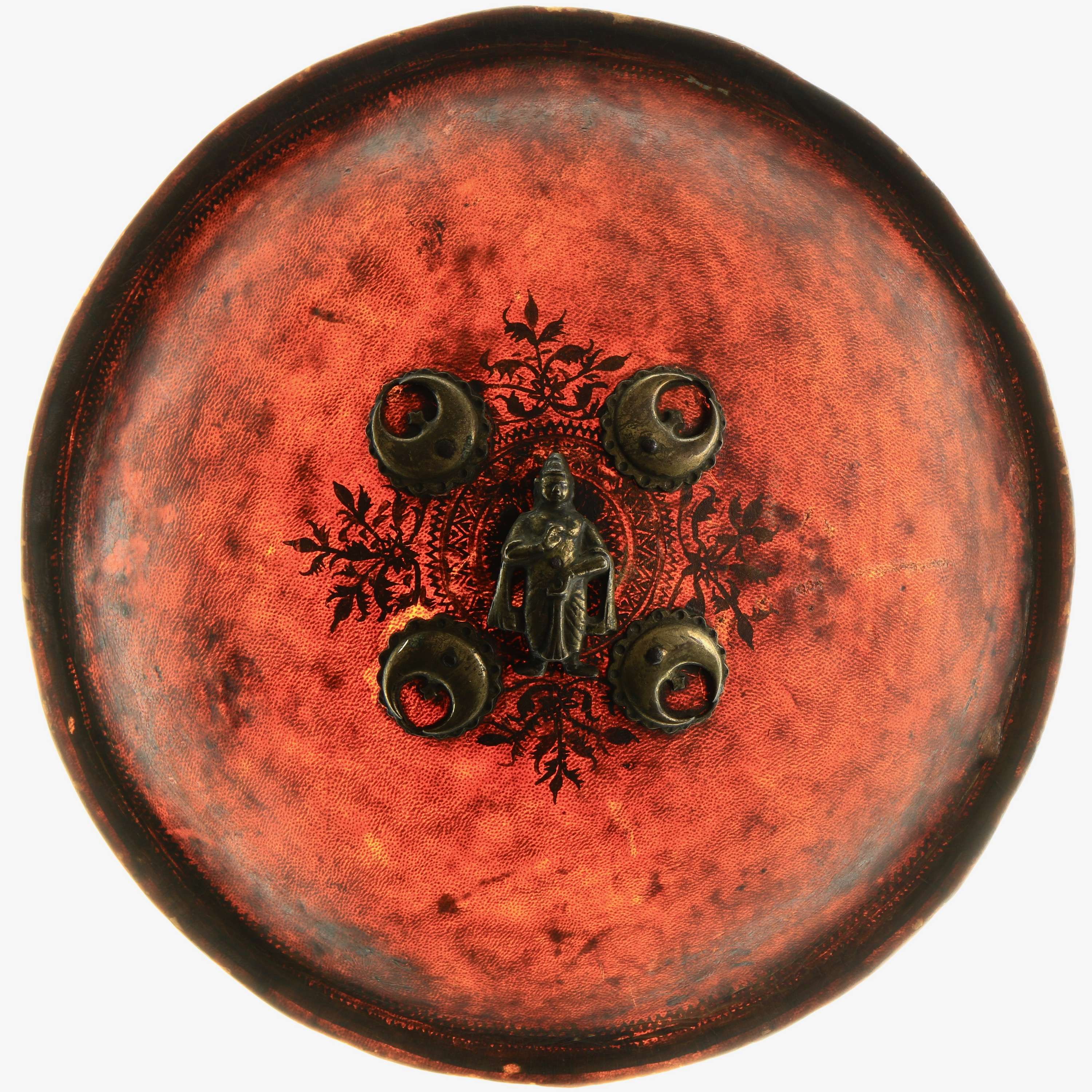