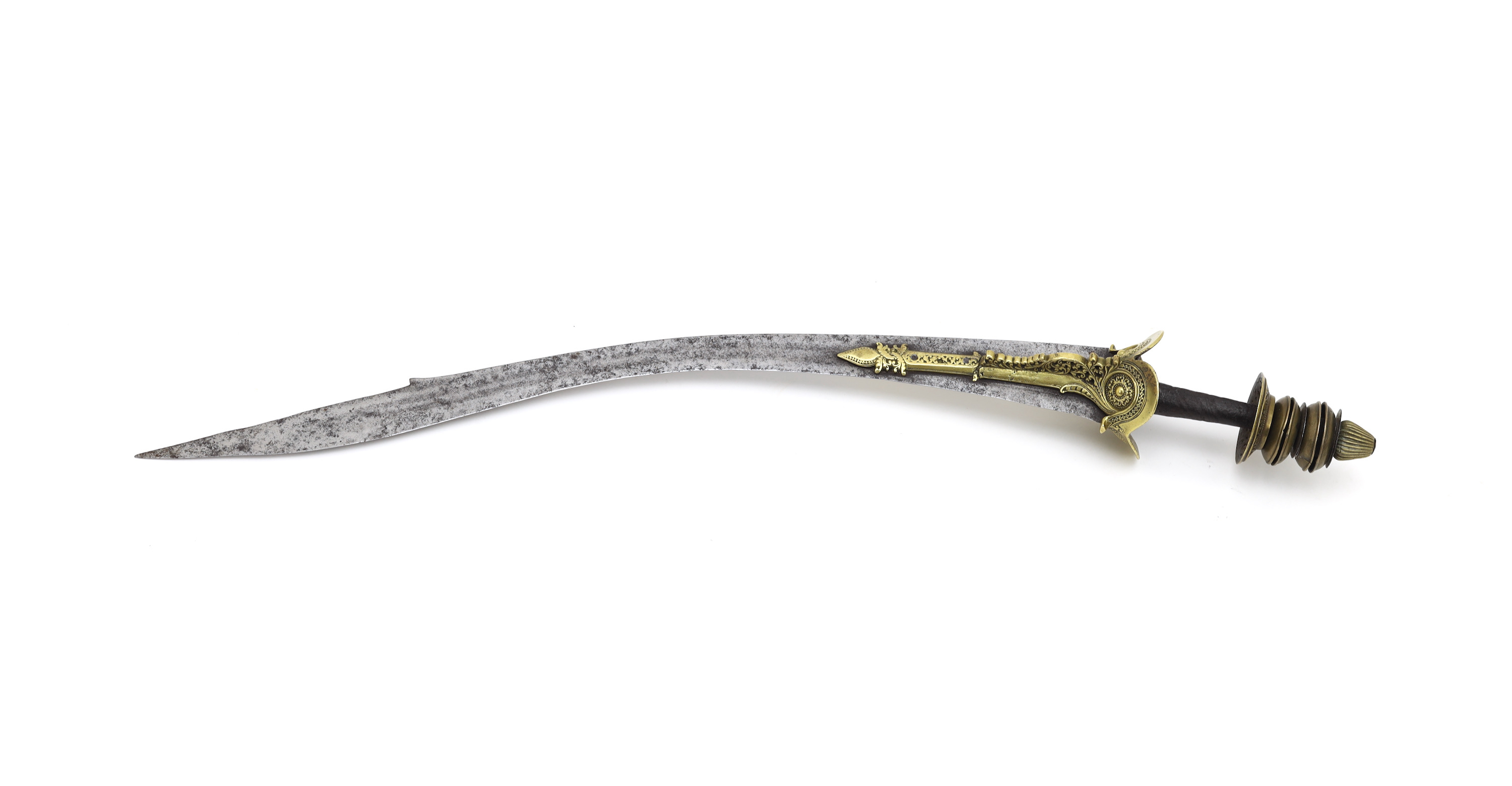 This peculiar type of sword was used in India for many centuries. Scholars have proposed that the general blade design may have been inspired by the Greek machaira sword that was brought into the area by Alexander the Great.1

Increased (maritime) trade and Muslim armies pressing down from the north introduced more conventional curved sabers into India which gradually replaced this style. They remained in use the longest in South India, where an alliance of Hindu kingdoms under the Vijayanagara Empire had long been able to resist the Muslim invaders until they, too, fell in the 16th century. Early Western accounts associate these swords especially with the Nayar, (also known as Nair), a group of Hindu warrior castes of Kerala, South India, who were among the last to use them in fighting.

They may have lost practical relevance but remained in ritual use in Theyyam dance rituals in Kerala, and Bhuta Kola animist spirit worship in Karnataka. Some antique ritual swords are even kept in use until this day. 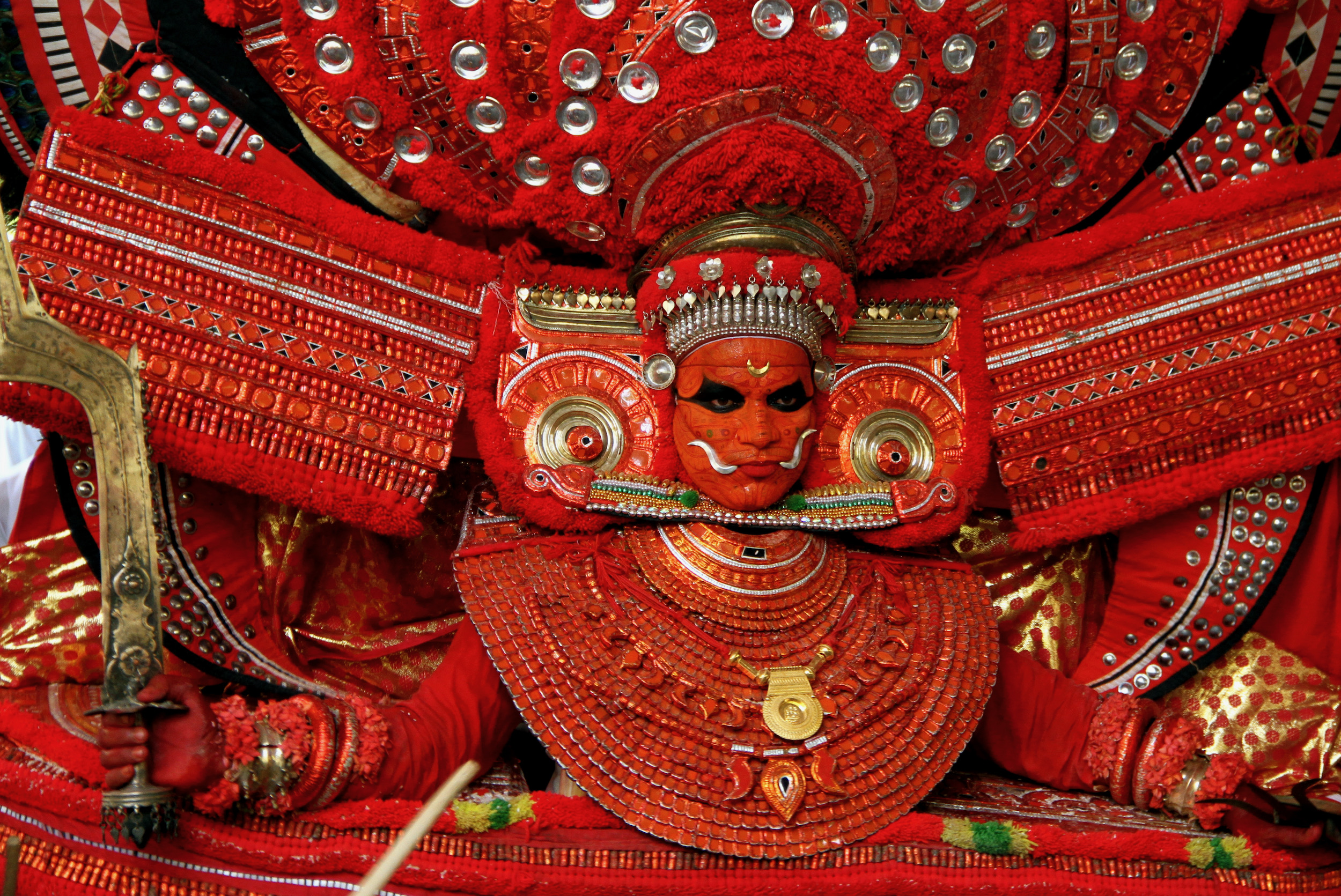 An antique bronze sword in use at a contemporary Theyyam ritual.
Photo by Dhruvaraj S.

A fine example of the 17th or 18th century. This iteration of the design is purely ceremonial; the blade is thin and flexible, meant to vibrate, and the pommel is full of metal jingles that make a ringing sound to add to the spectacle.

Its most striking element is the cast brass guard with four circular ornaments, chakram, each different and carefully chiseled, and the two long langets that hold the blade, reinforced with pierced scrollwork. The pommel consists of a series of discs, four of which hold jingles, and a ribbed pommel nut. 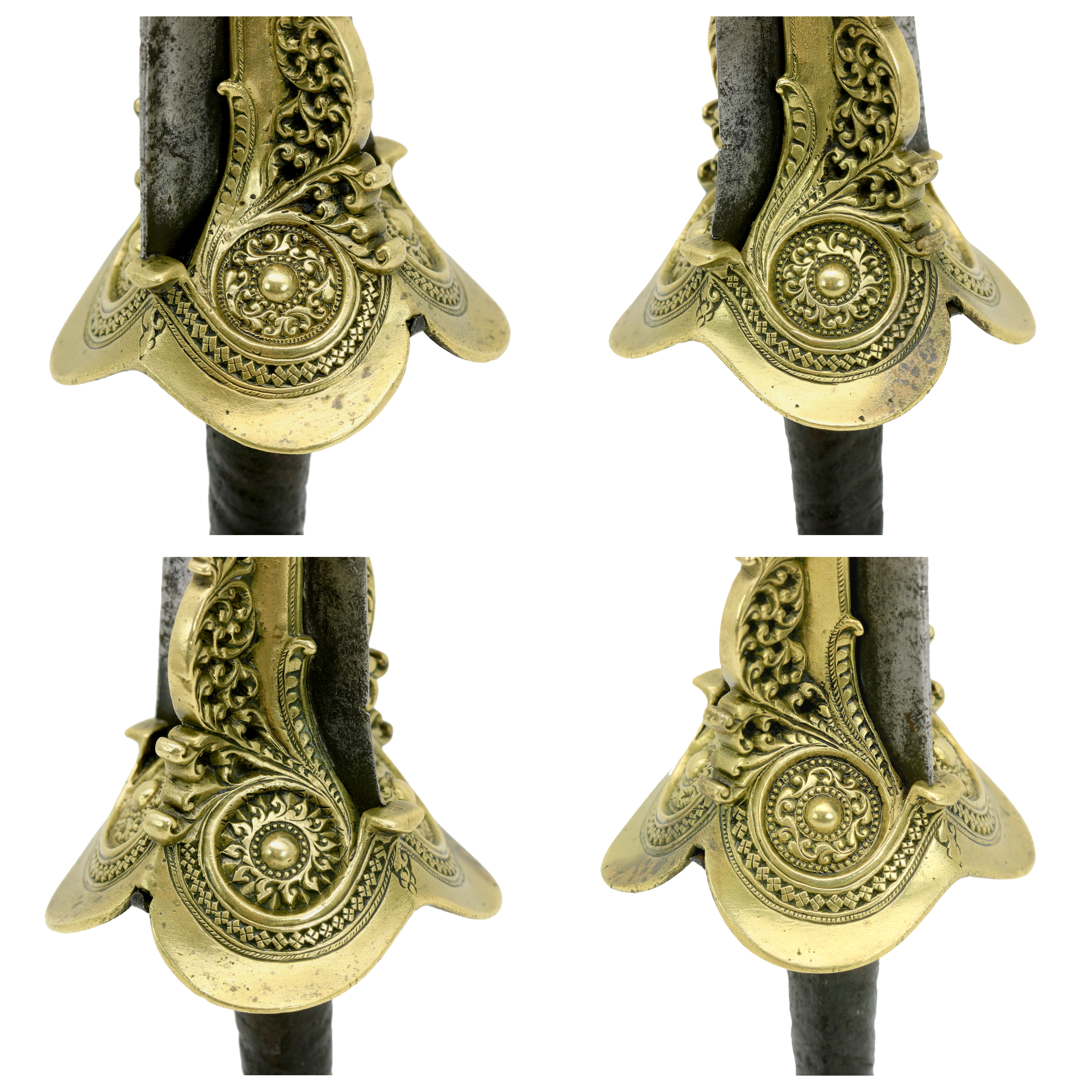 The four different chakram on this sword's guard.
Each individually carved, after casting.

Philip Rawson, a notable scholar on the Indian sword, coined the term “Nayar flamboyant sword” for these, which has remained in use since. They are thought to represent a nostalgia for the good old days of Nayar military height of centuries past.2

This sword is a very ornate example in a rarely encountered style, exhibiting a much higher level of complexity in design than usually encountered on these swords. I am not aware of any direct comparables in museums or collections in the Western world. 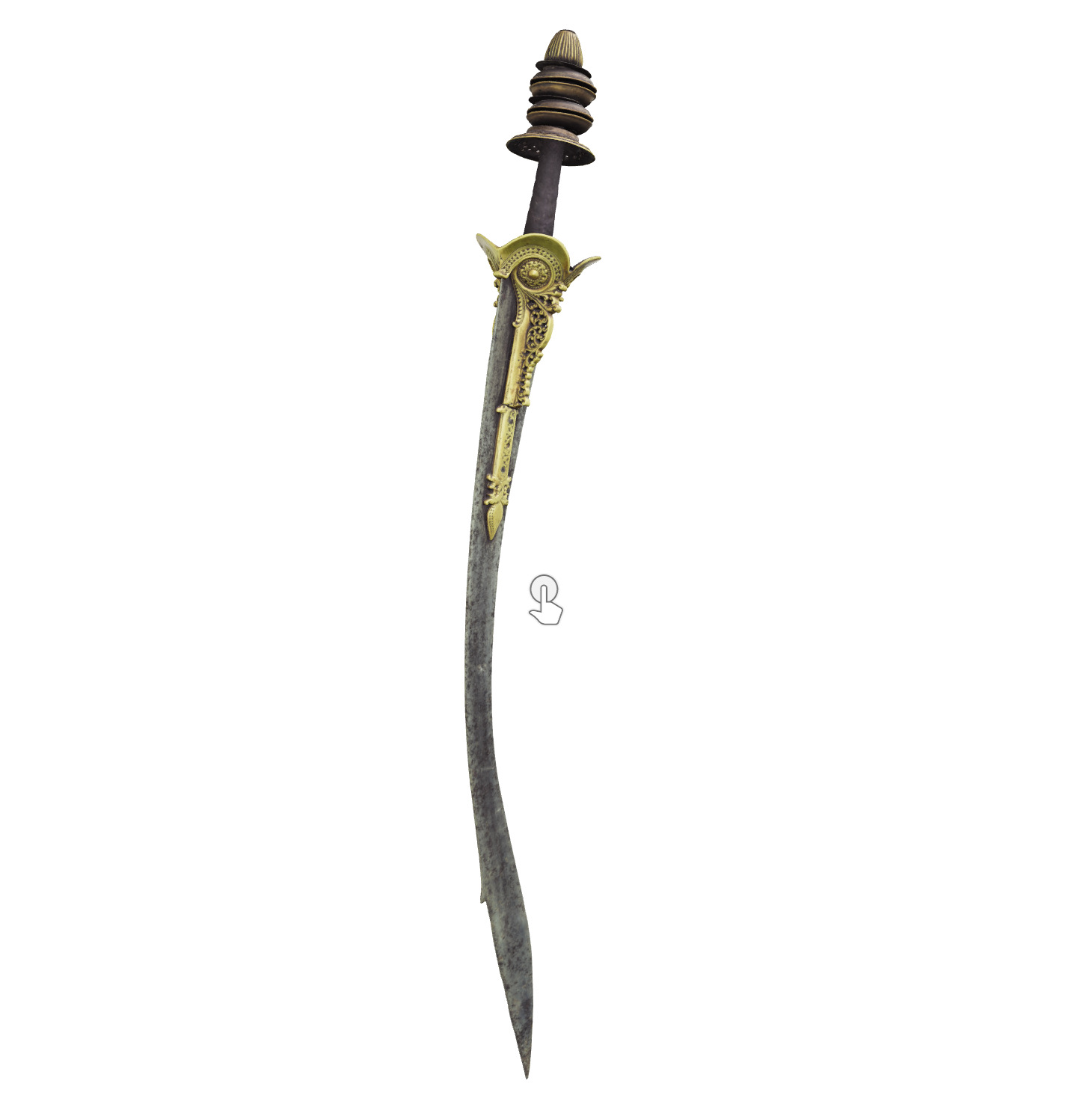 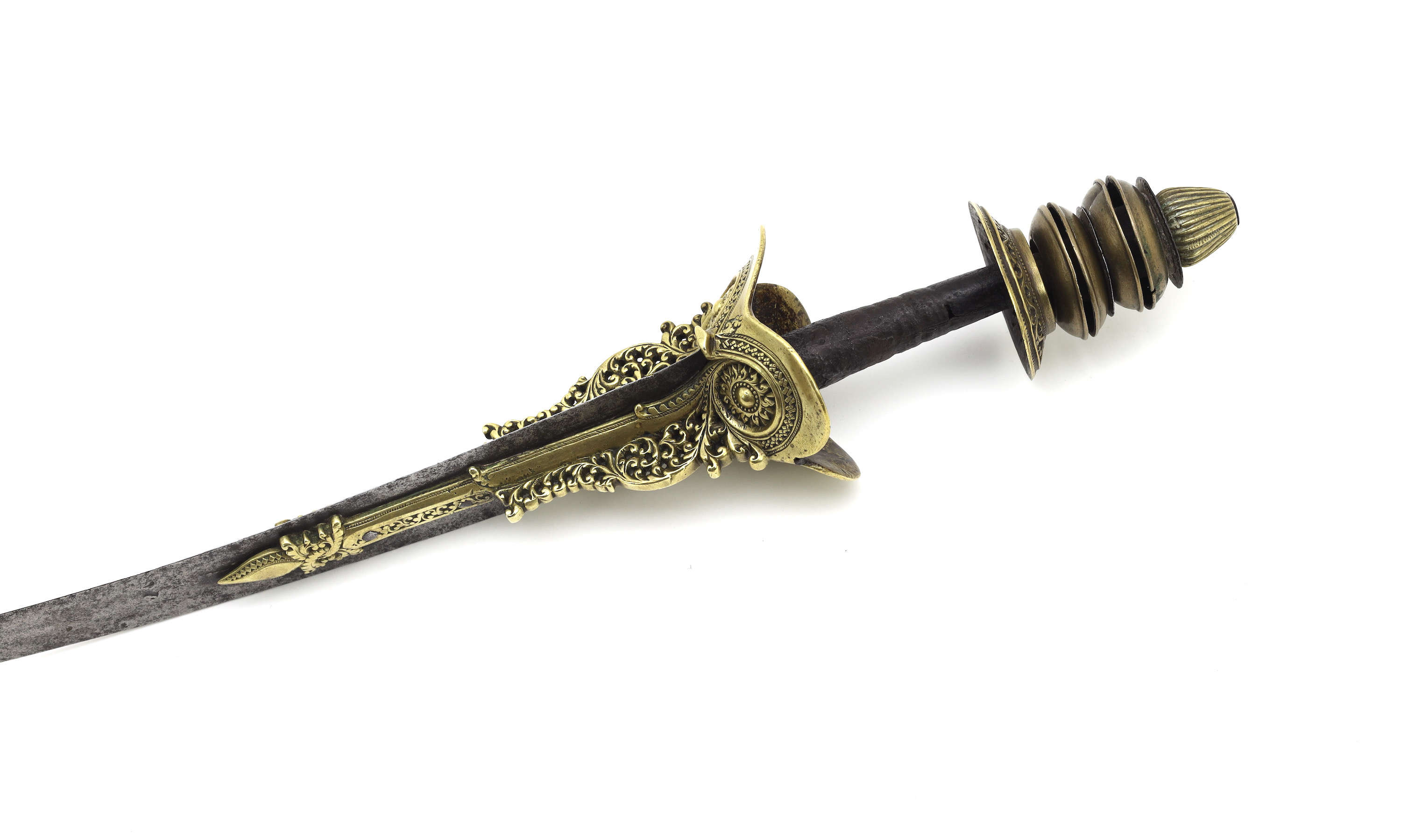 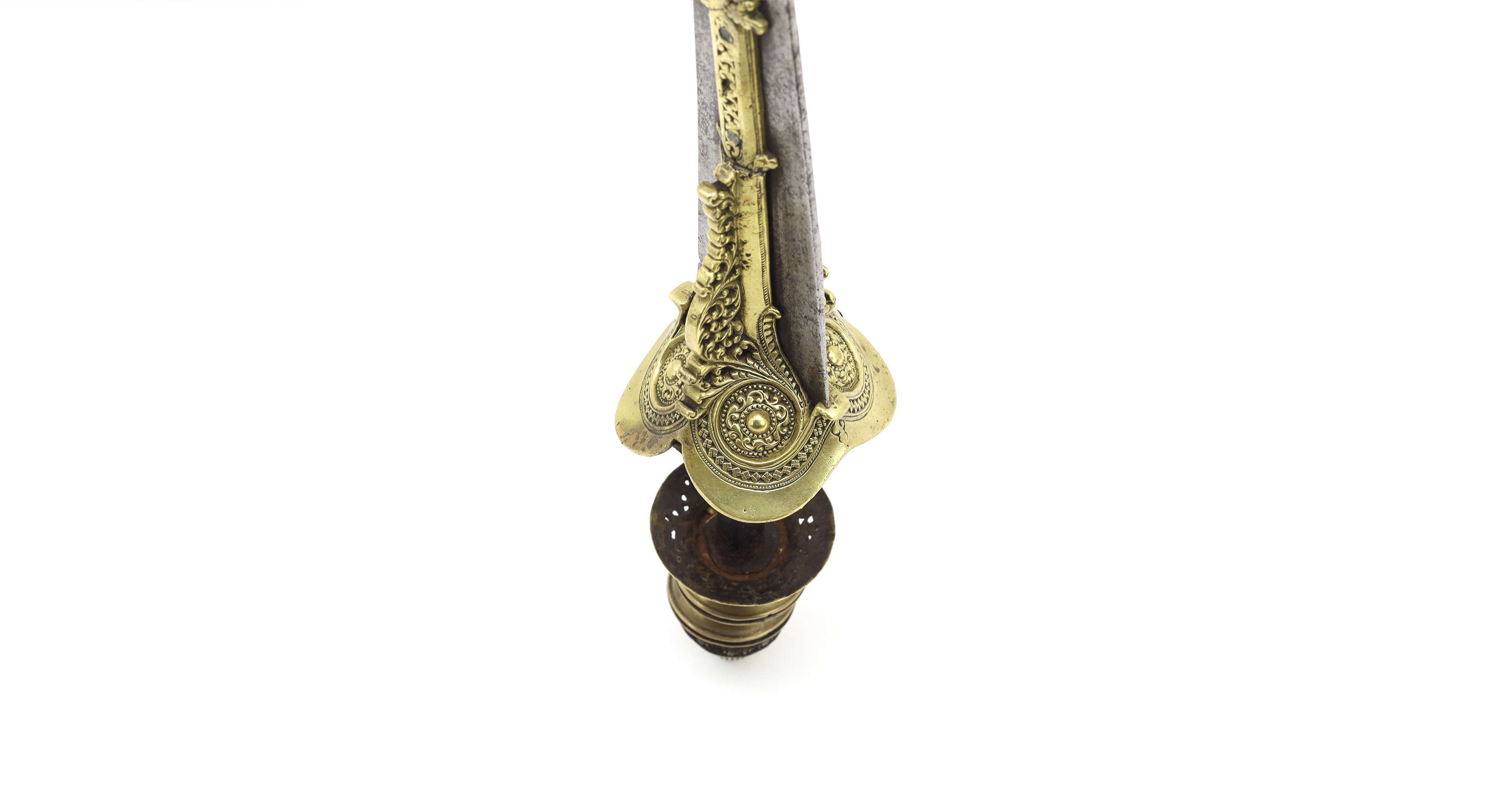 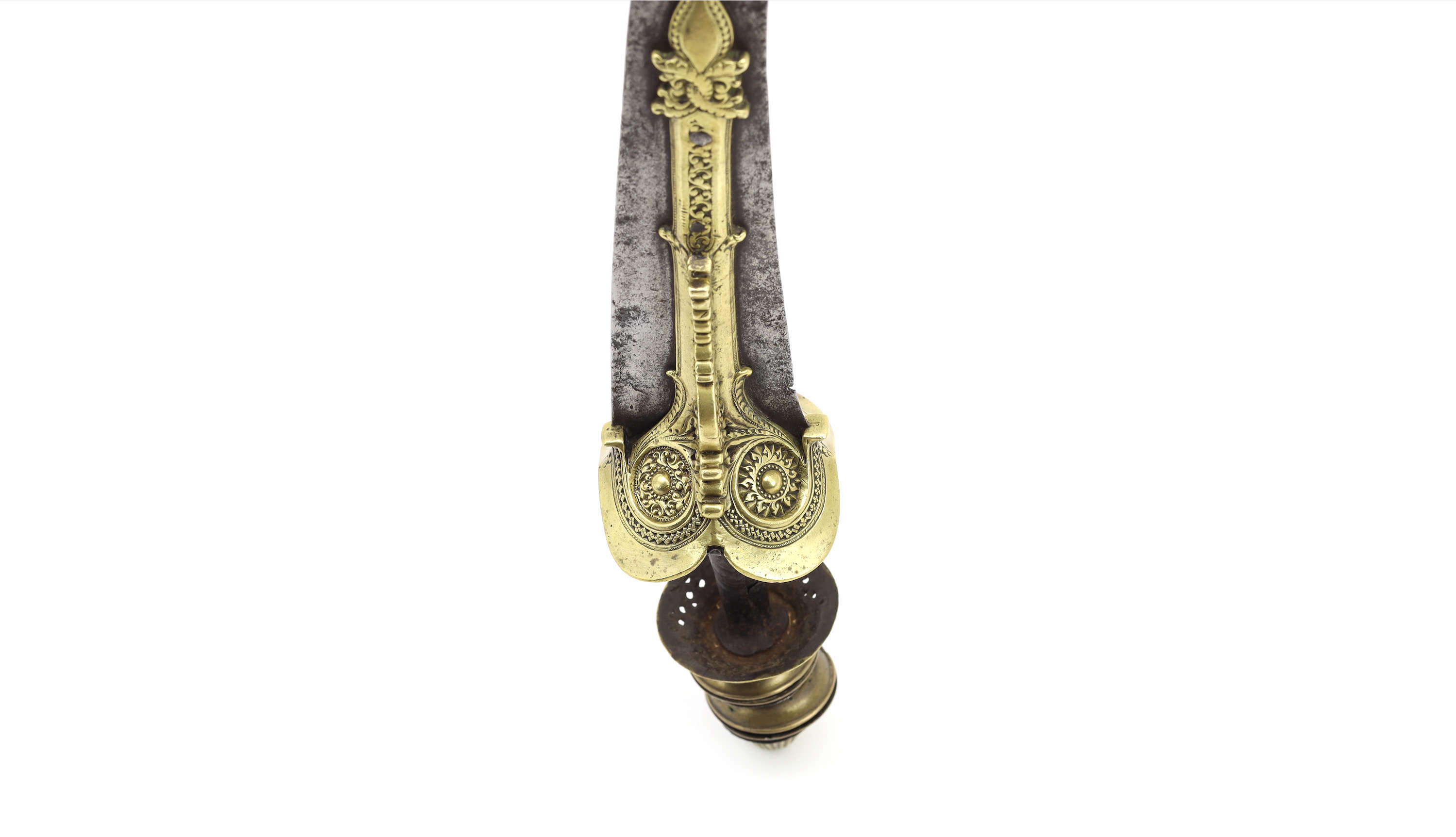 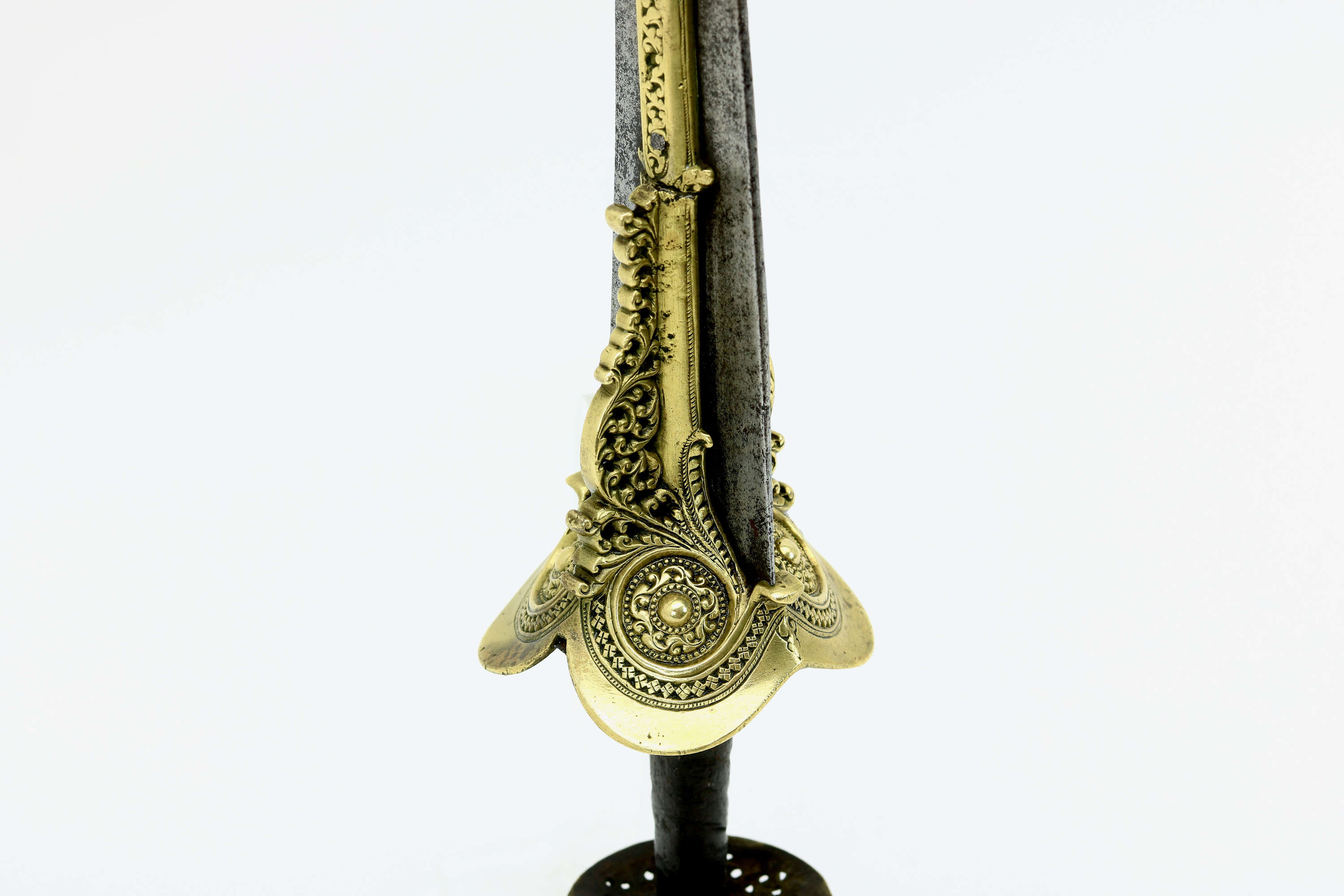 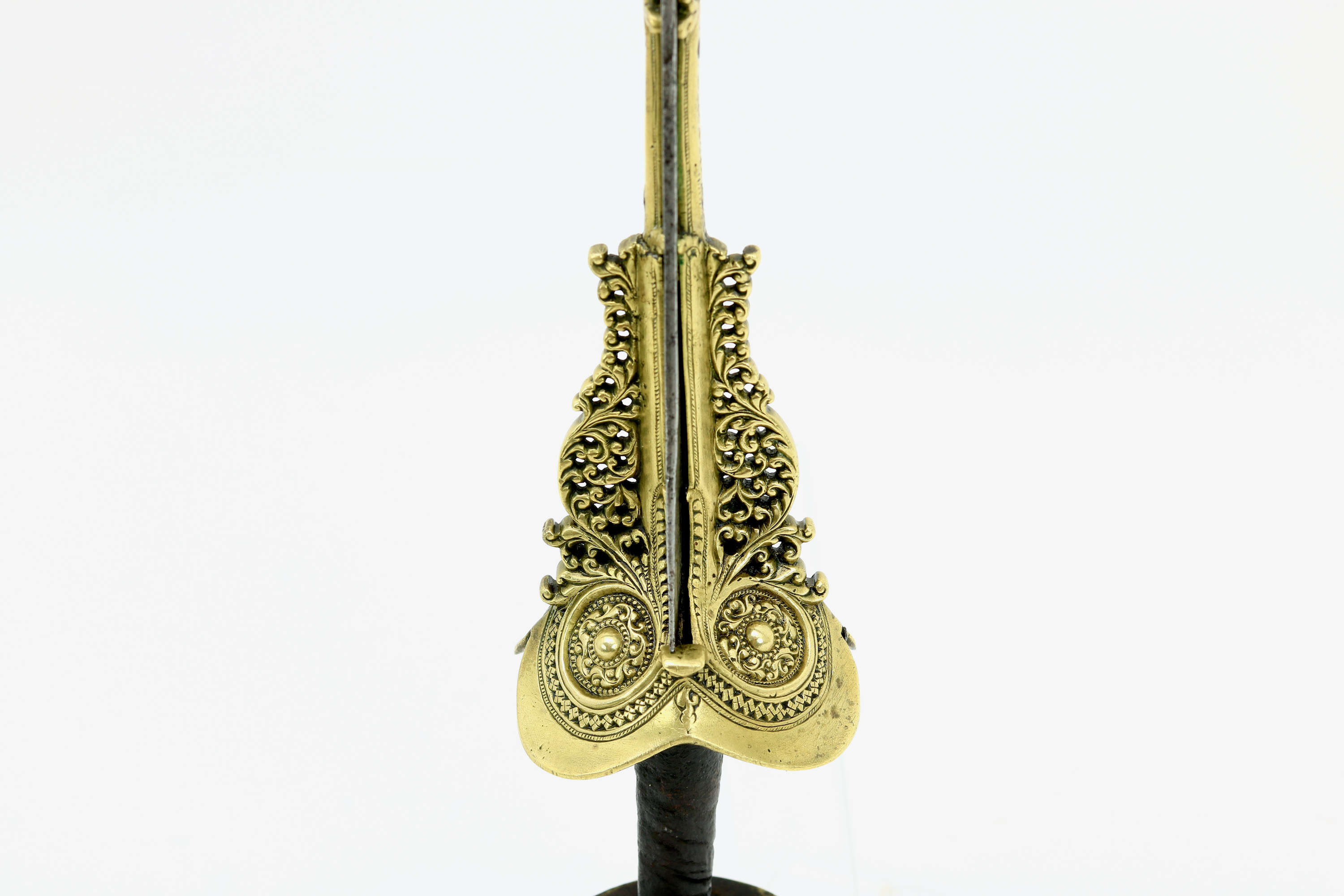 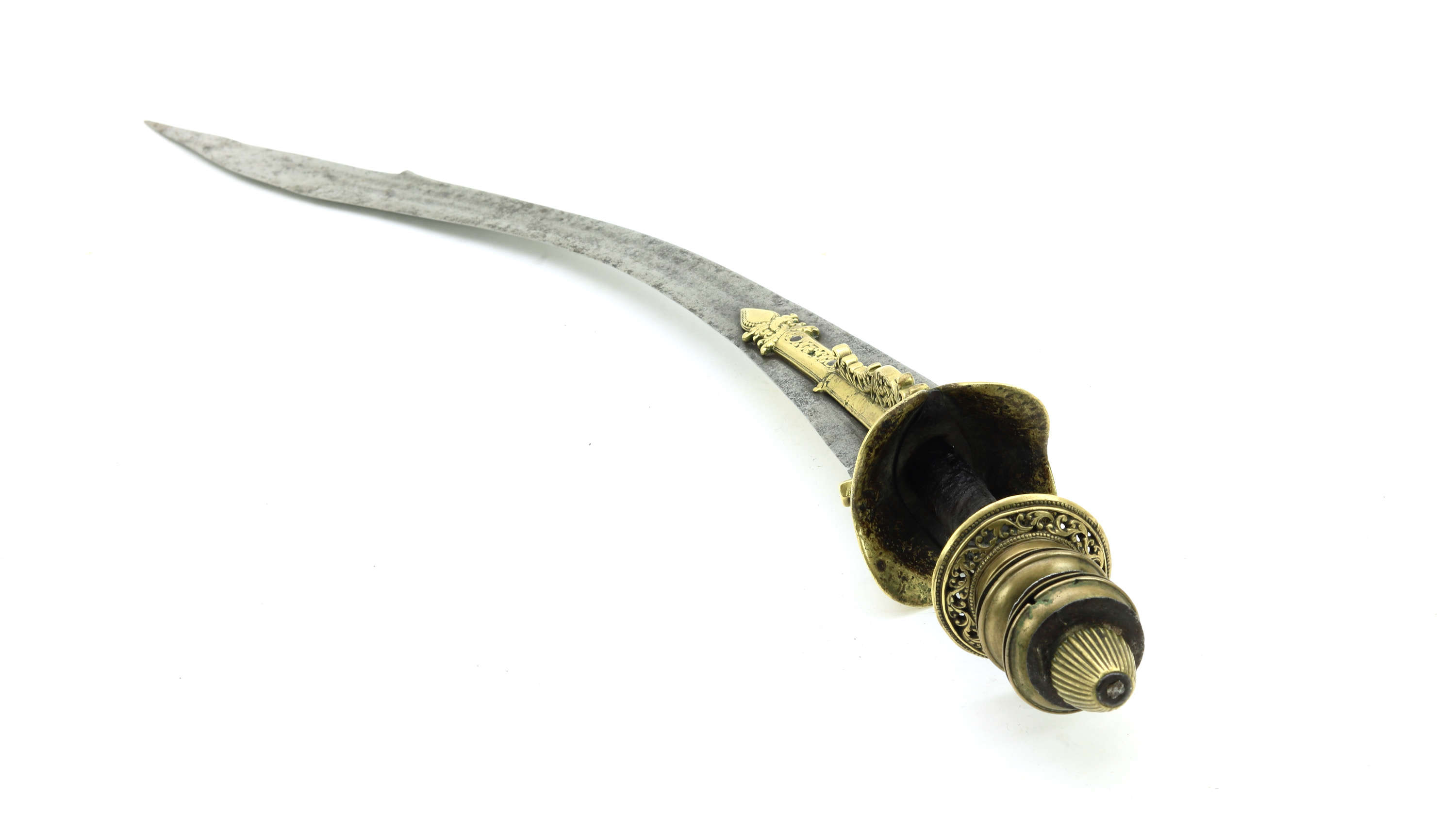 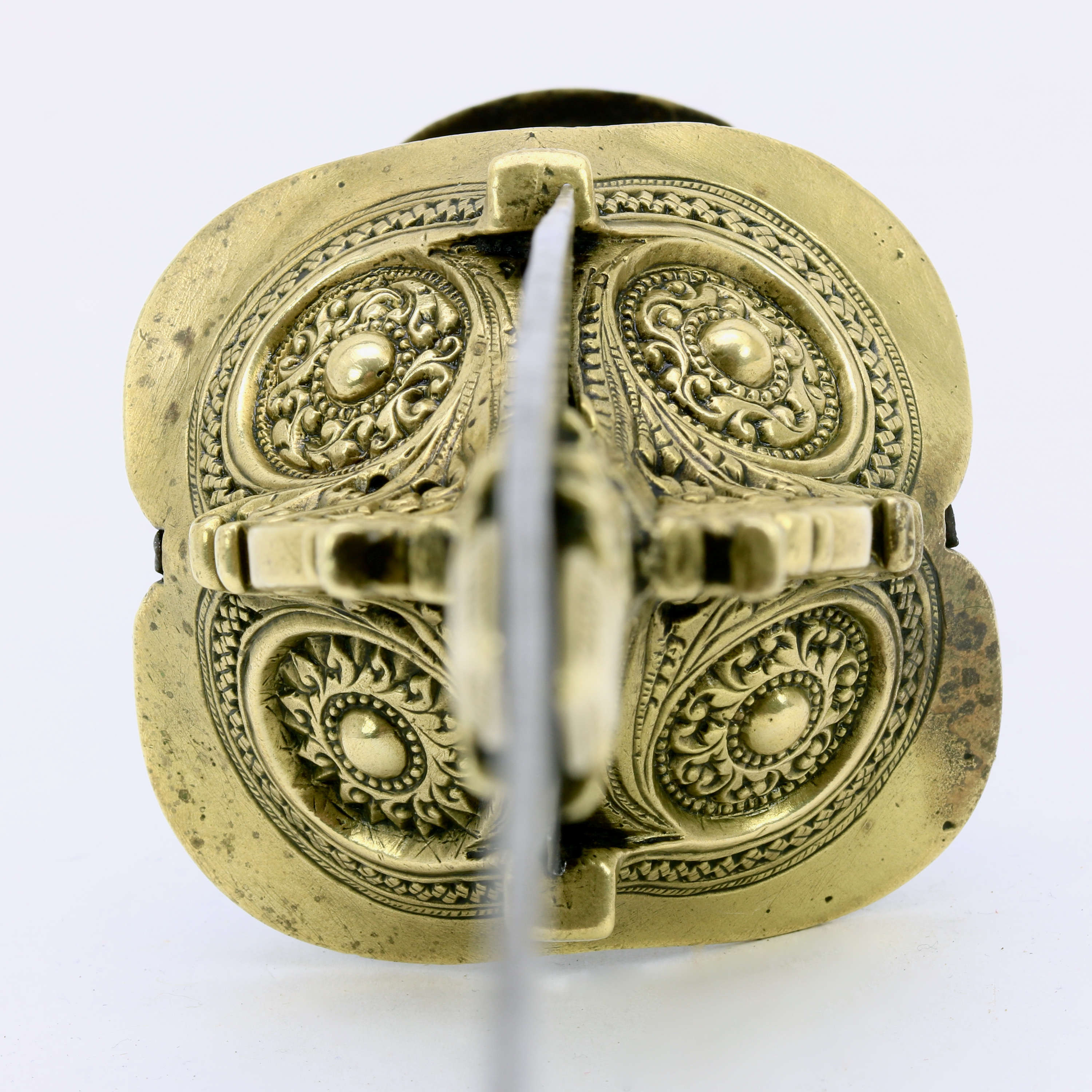 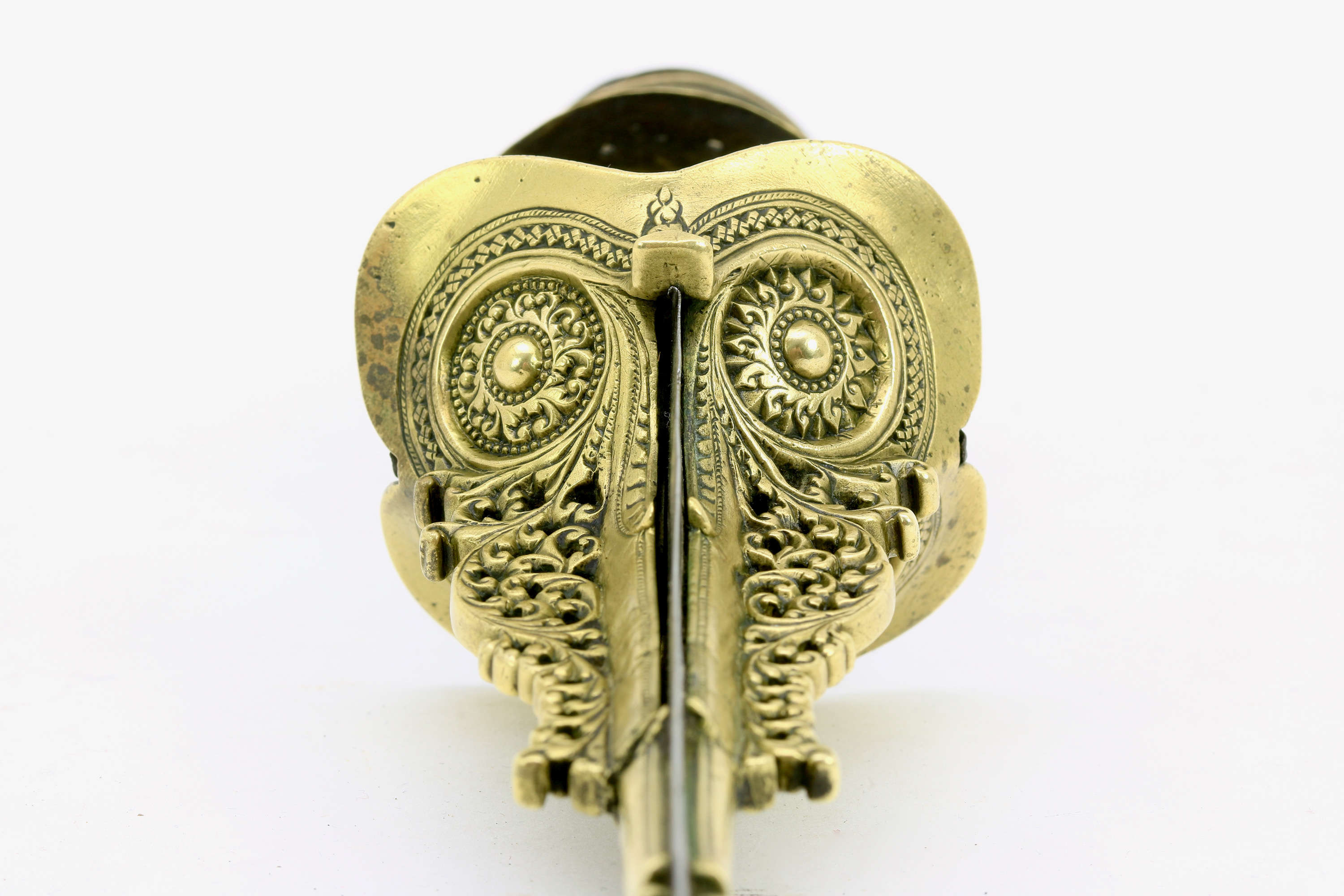