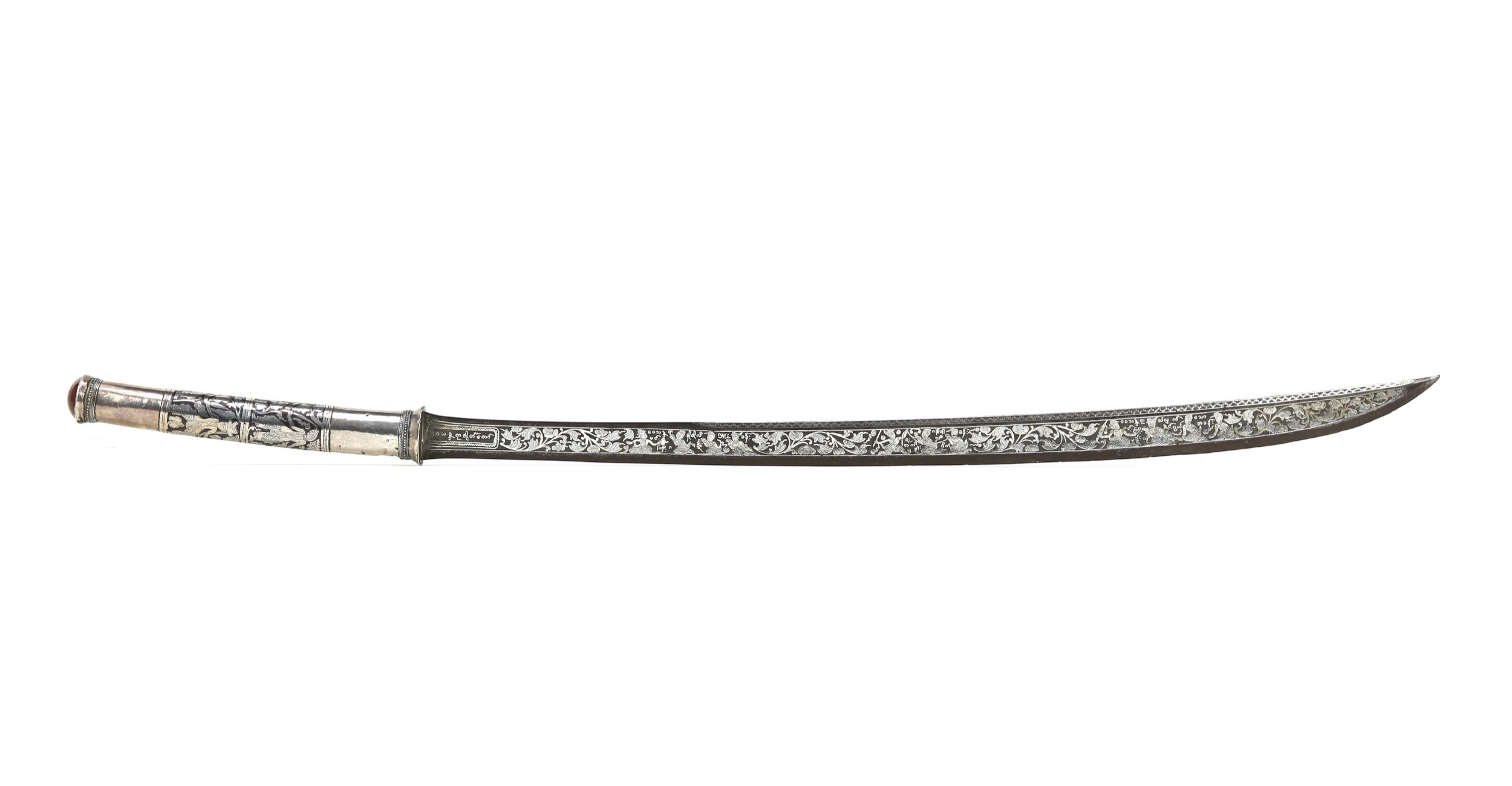 The inlaid dha and dagger blades of Mindan near Yamèthin are well-known. The dhas are inlaid in gold, silver and brass.1

"Of the 26,221 workers and dependents shown in the census returns under the head of workers in iron and hardware, few can have been capable of executing anything more than the coarsest blacksmith's work. An exception must, however, be made in favour of the forgers of the inlaid knife-blades produced in Yamethin District, some of whose work is really meritorious." 2

The most thorough account on their work is Bell's monograph on Iron and Steel production in Burma:

A fine Burmese dha with a well-balanced, heavy blade with a long back bevel. The blade is overlaid in silver in the typical Mindan fashion, with annotated scenes from the Vessantara Jataka story.4 At the base, for example, is written on both sides:

Jataka are stories about the previous lives of Gautama Buddha. In this particular instance, the Buddha was a prince named Vessantara who is eventually crowned king. It is one of the most popular stories of Theravada Buddhism and tells of a compassionate prince called Vessantara, who gives away everything he owns, including his children. The story is celebrated annually with festivals on the full moon of the 12th lunar month.

Vessantra offers his children as slaves to Jujaka, a poor Brahmin, while his wife Maddi is out in the forest.
Three gods disguised as tiger, lion, and leopard keep her in the forest to save her the suffering of witnessing the children's departure.

The sword's hilt is completely covered with silver sheet and scenes in contrasting niello. Just under the silver it seems to be strengthened with iron, as a magnet firmly sticks to its outer surface. There is fine ornamental silver braid work on either end of the hilt. The pommel contains a deep red stone, probably agate.

The Gazetteer of Upper Burma and the Shan States of 1901 mentions the use of red stones on dha as insignia of certain officer ranks around the Shwe-gyo-that Ne, literally: "Royal City Area", the Mandalay district.5 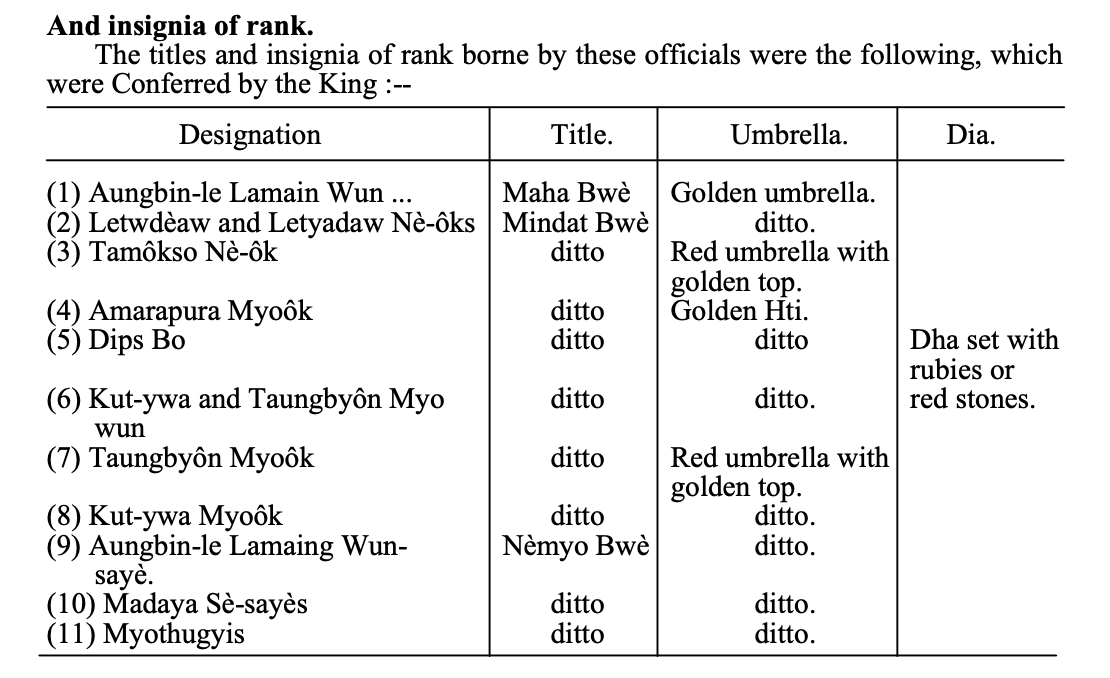 The duties were described as follows:

"The duties of all the officers were to try civil and criminal cases; to collect land revenue and thathameda; and to repair roads, bridges, bunds, irrigation channels, and the like, within the limits of their charge.

They were at one and the same time Police Officers, Magistrates, Judges, Revenue Officers, and Engineers, and there were no rules limiting their powers or their duties. The more serious cases, however, were generally decided by the Wuns, Myoôk, and Né-ôks." 6

Yamethin where these dha were made, was some 200 km south of Mandalay.

A fine Burmese dha. Because of the story portrayed on the blade, some collectors have called these "story dha". But not all of them portray a story, what unites them more than anything is the lavish use of silver in hilt and blade overlay, and their craftsmanship which was applauded then and now.

A survey through the literature indicates that these are mostly made in Mindan village, Yamethin district. They seemed to have been made mostly on order to people who could afford them. In one case this was a British officer called Rundle who ordered one in 1898. (See: The Rundle Dha). The foreign market was of course only a side-business for the Mindan sword makers who mostly catered to a local, high-market.

This particular dha has an interesting addition in the form of a red stone pommel which may be indicative of it being made for a state appointed official in the Mandalay district. 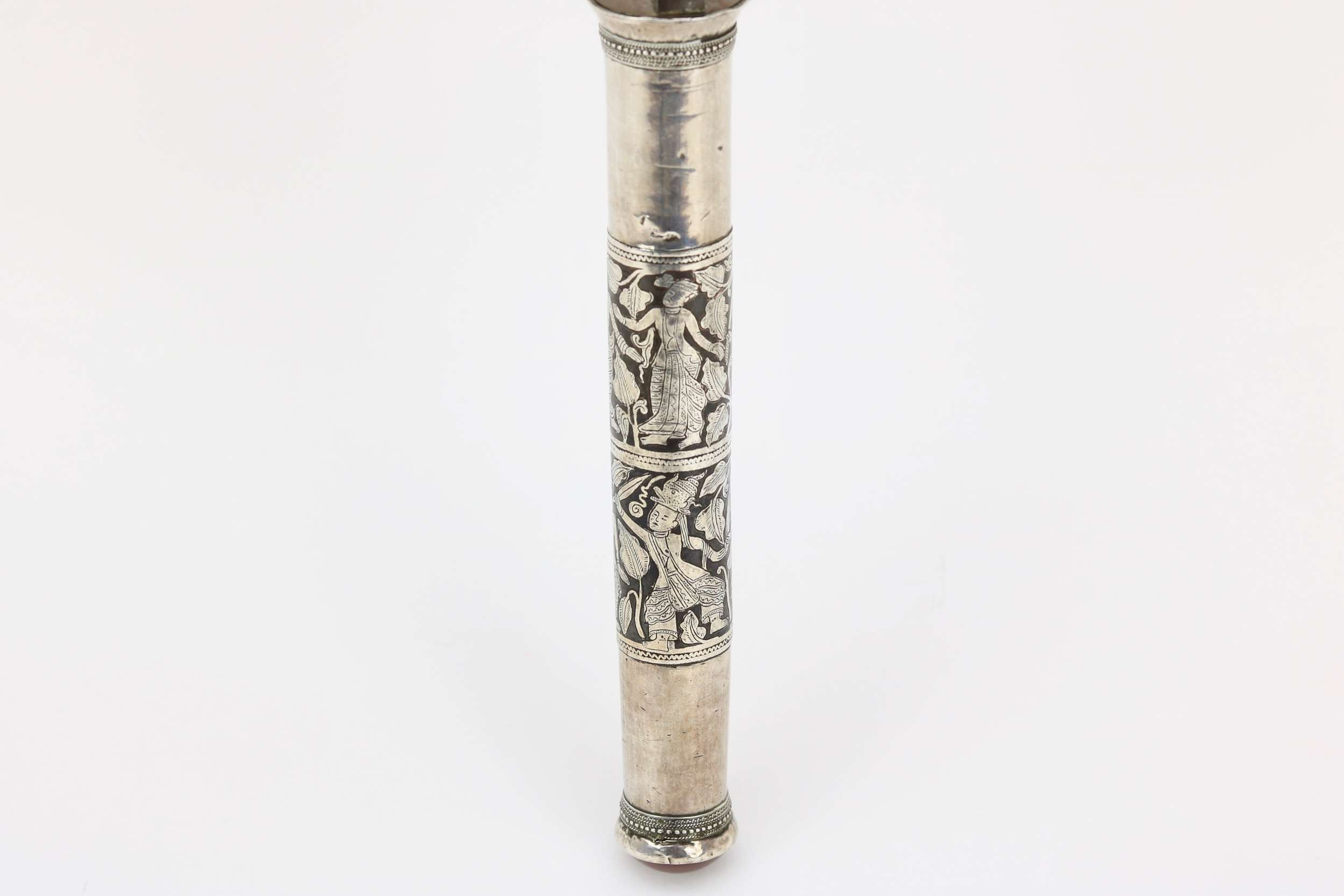