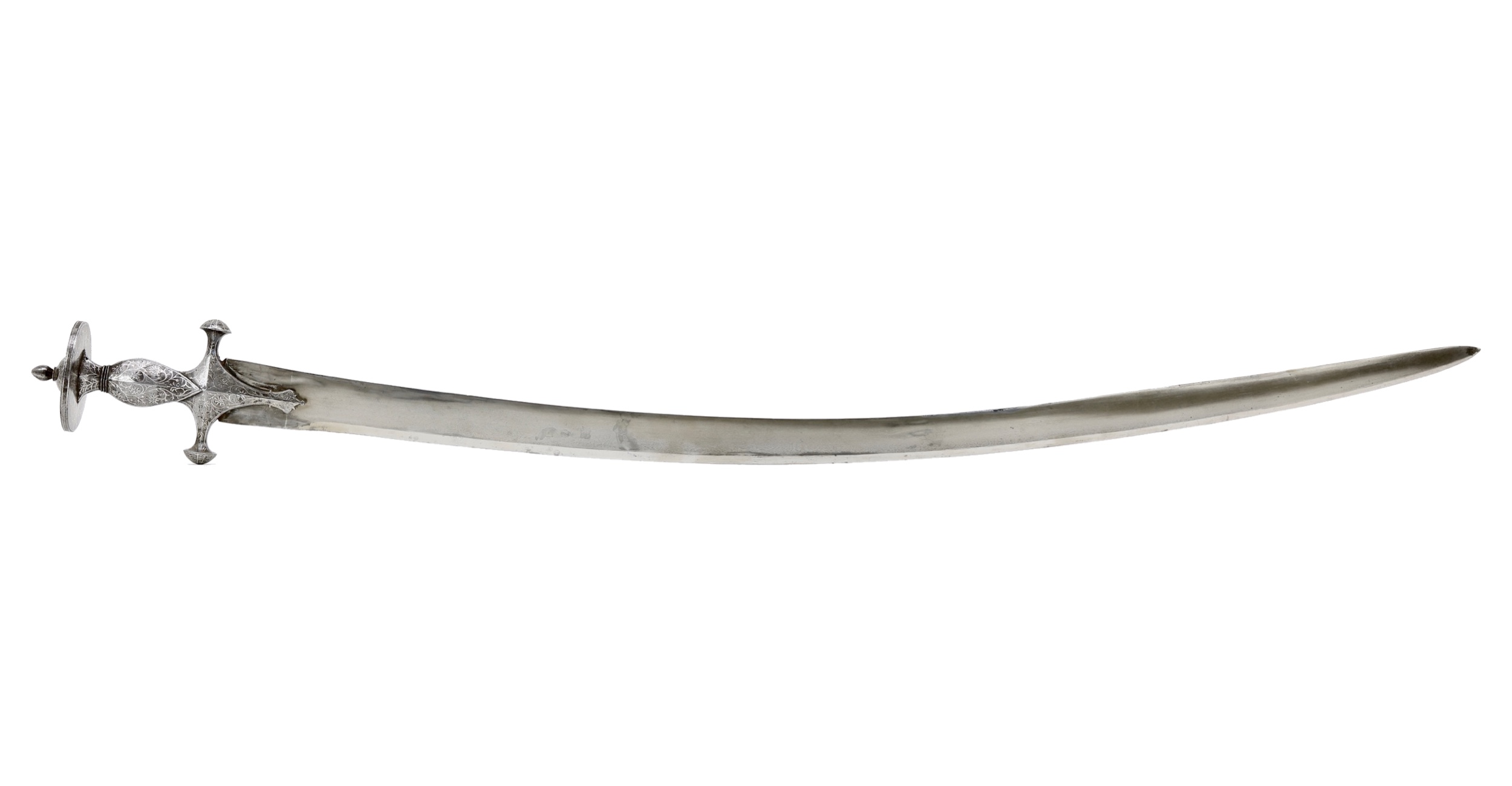 A large Indian talwar, built around a fine blade that consists of two pieces that were lap-welded together.

The novice may frown upon the practice, but seasoned collectors will know that this is actually quite common and the welds were seen as auspicious:

"The bands created by the lap-welds are known in Rajasthan as "mala", plural "male", meaning "garlands" or "necklaces" and are considered auspicious." 1

The blade is long, slender but heavy and has a long, fully sharpened backedge. Size and handling characteristics suggest it was a cavalry sword.

The steel is a very fine-grained wootz. It is curious to see that it was lap welded and that the wootz pattern is intact at the weld, as it is generally thought that wootz will lose its pattern if it is heated to high temperatures. Yet, to accomplish a lap-weld like this it should be heated to around the melting point, usually around 1370 degrees Celcius for steel.

A secondary bevel forms the edge, which is burnished as is the northern fashion.

The steel hilt is in hakim shahi style, a form that was among others produced widely in Delhi.2

It is decorated with silver lines in true inlay, forming swirling vines that are slightly different on each side. On the side of each of the quillons, we see spiderwebs, a rather unusual feature. True inlay is a much more durable method than the commonly used overlay, and as a result, almost all the silver is retained.

The work is nice, strong, and bold, a hallmark of earlier examples dating from the 17th and early 18th centuries.

The steel shows signs that it was once probably blued:

Signs of blueing on the sides of the langets.

According to Hendley, the combination of blueing and plant motifs in true inlay was an earlier feature:

"The visitor to the Indian Section of the South Kensington Museum will find good specimens of both forms of the work. He will see how very superior the old examples are to the modern ones. In the former the best results are attained with the simplest designs, which are displayed on an ample ground of blue steel. In the latter, even at the best, the work is spoiled by an excess of meaningless and elaborate scroll, floral, or arabesque ornament done in fine instead of bold lines." 2

"The older pieces (17th century) are decorated with large flowers or birds in silver damascene work." 3

In addition, there is a sword with identical hilt shape and blade geometry in Apsley House, London. It was acquired by Arthur Wellesley who would later become Duke of Wellington, probably during the Maratha War of 1803-1805. The blade carries markings suggesting it was owned by Mughal emperor Aurangzeb (reigned 1658-1707).4 The hilt is also of identical form to ours and seems to have been made in Delhi.

Overall, I would say it is probably from the 17th to the earliest decades of the 18th century.

A very nice example of a large wootz talwar with some interesting features. It features a good wootz lap-welded blade in near excellent condition and a hilt of strong proportions that is decorated with true inlay techniques in silver that were popular in the 17th and beginning of the 18th century. A rare, early, quality piece. 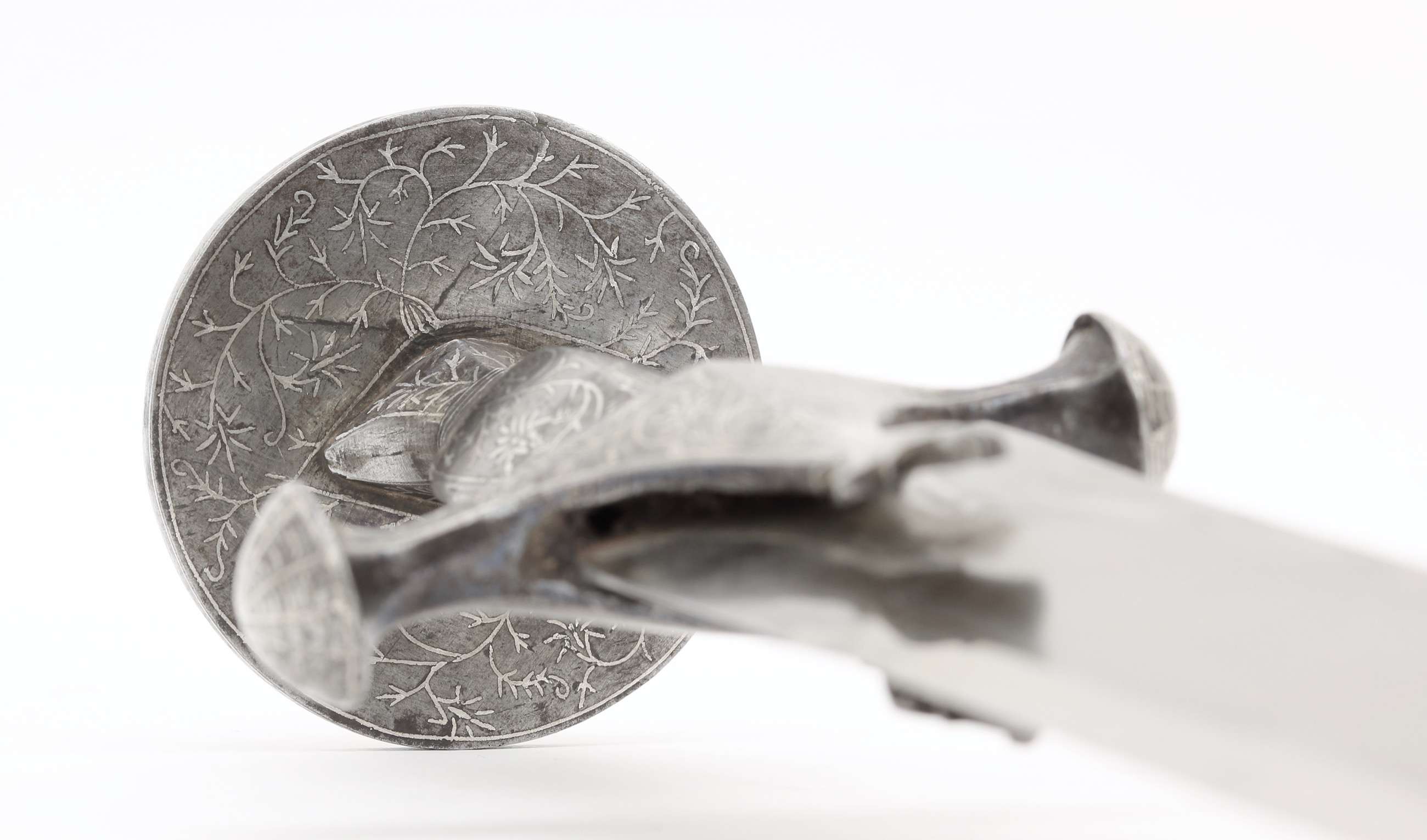 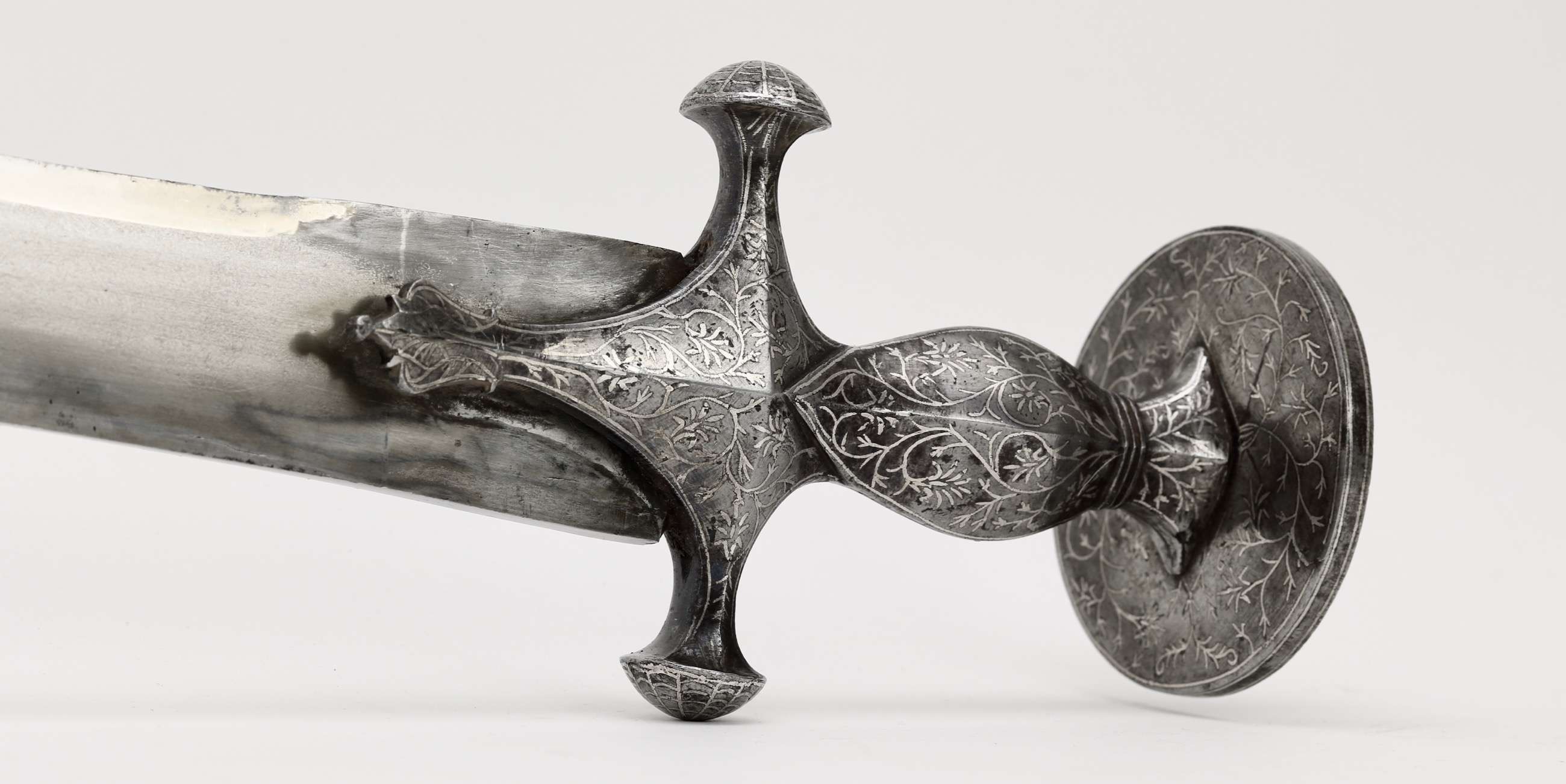 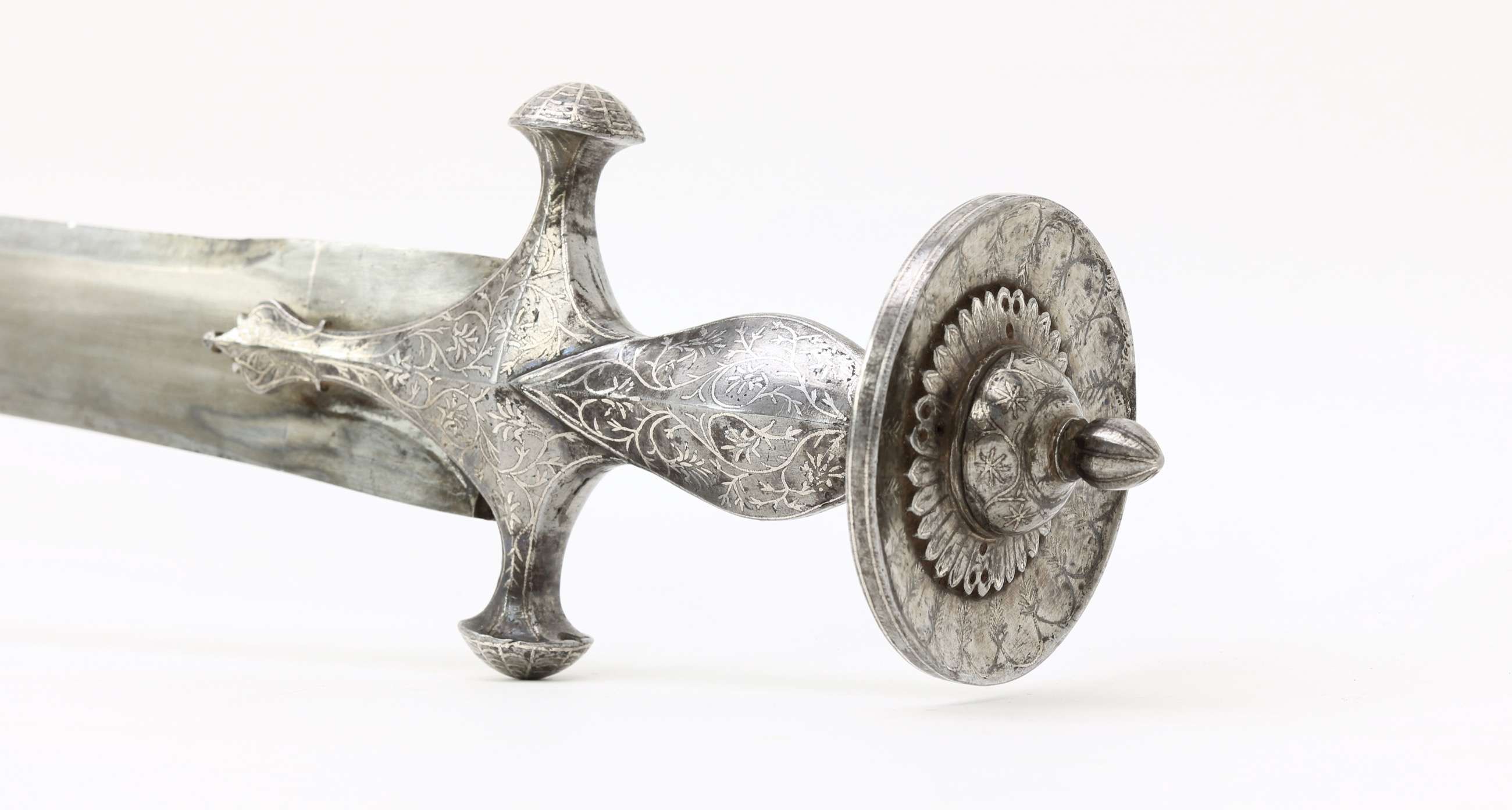 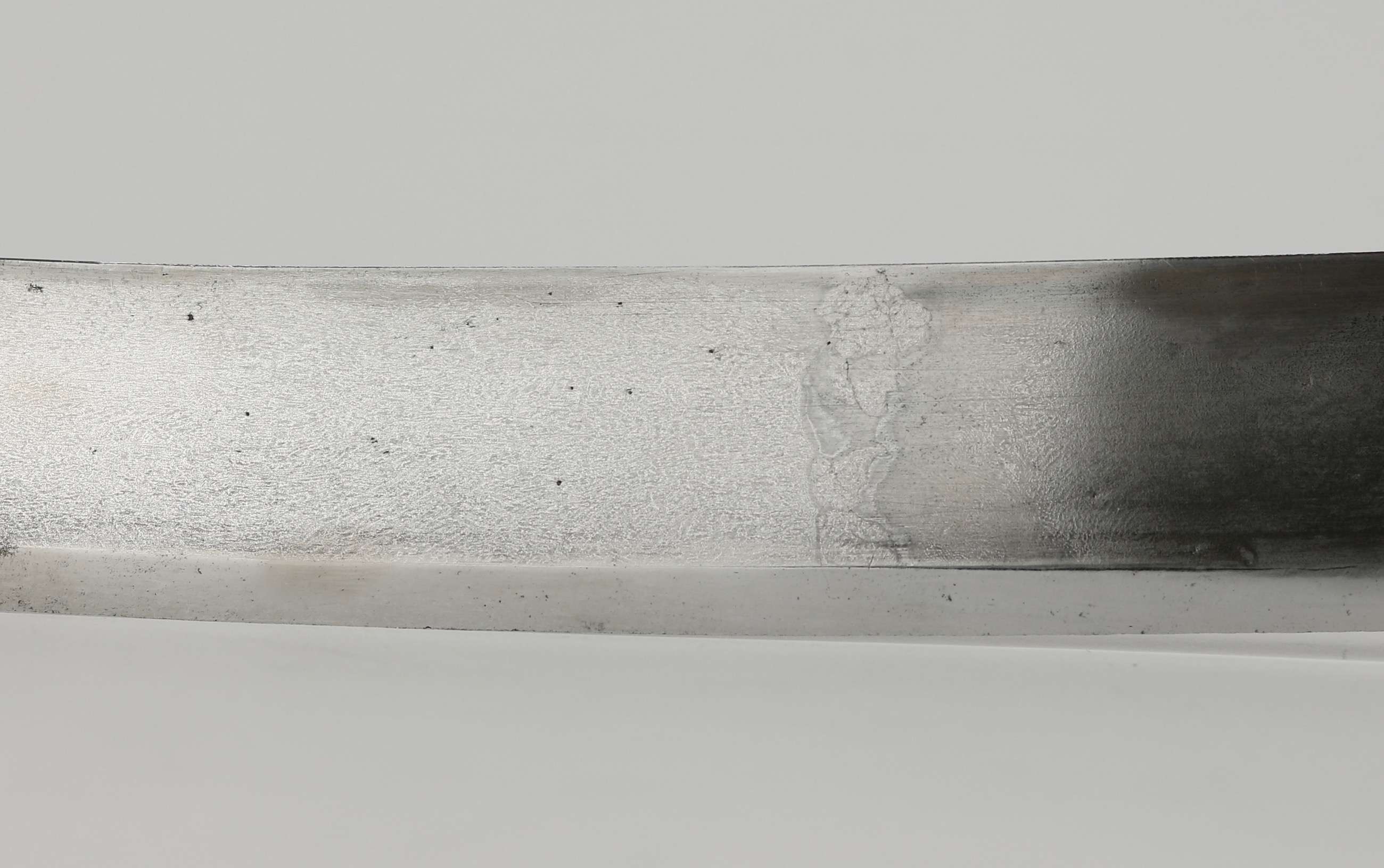 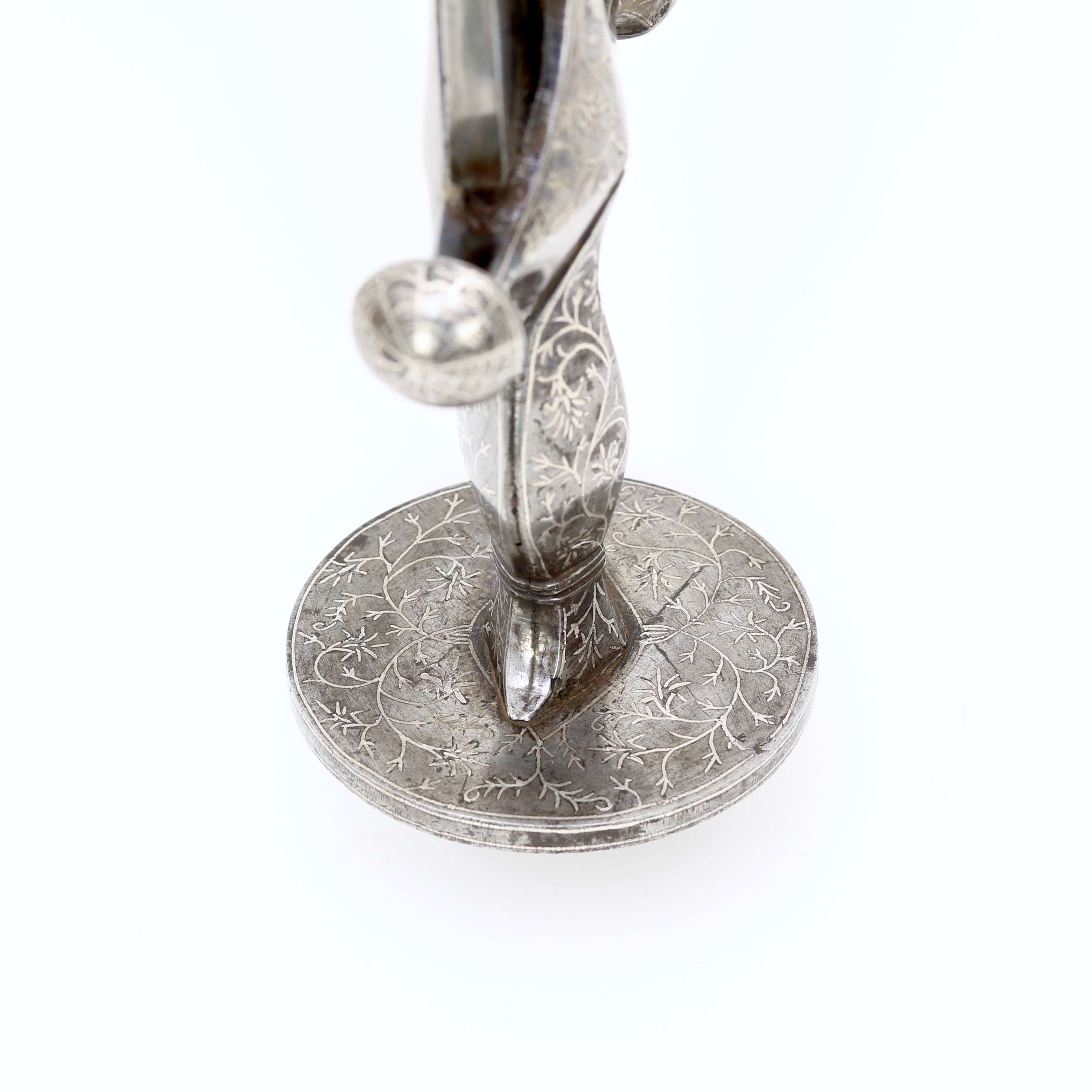 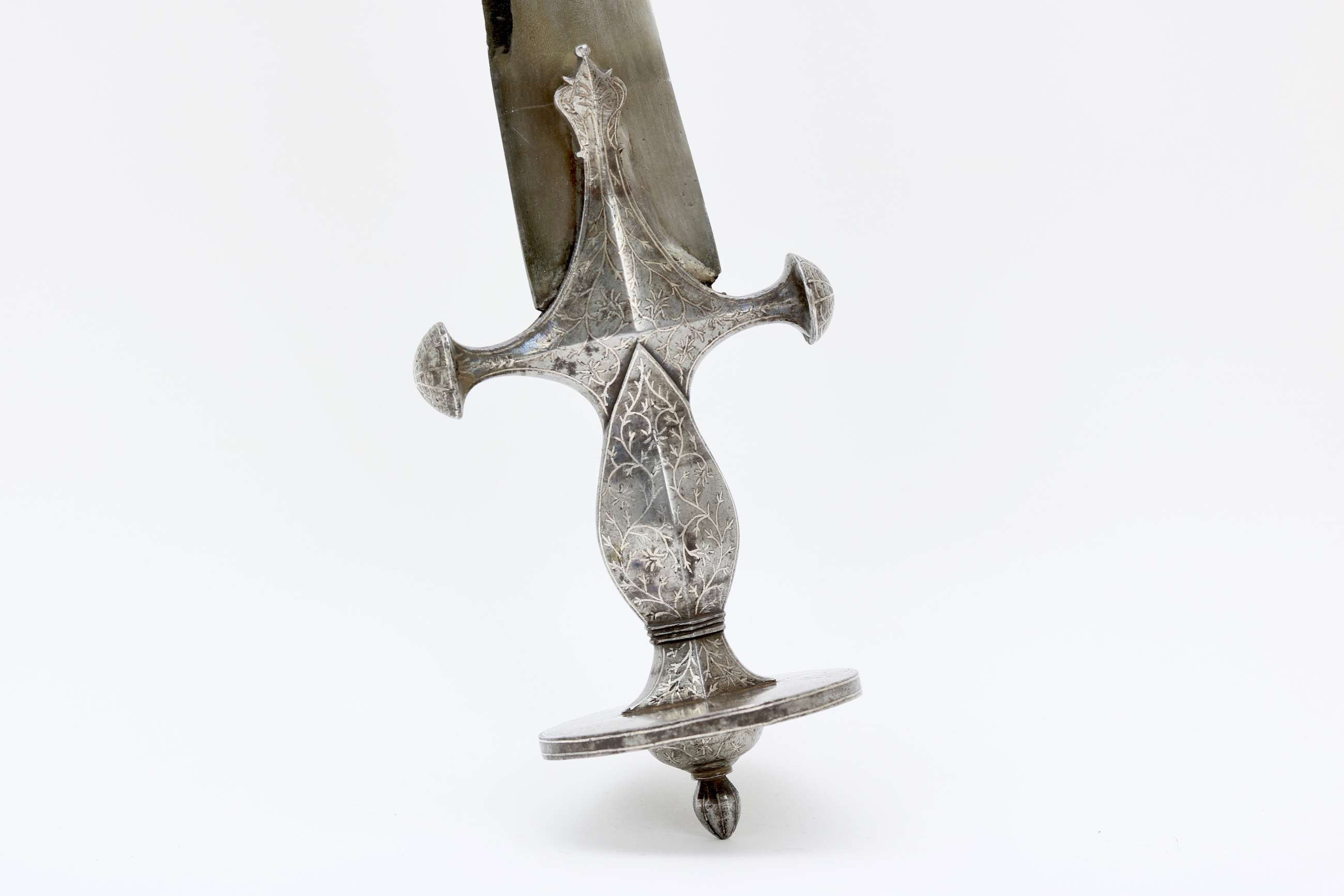 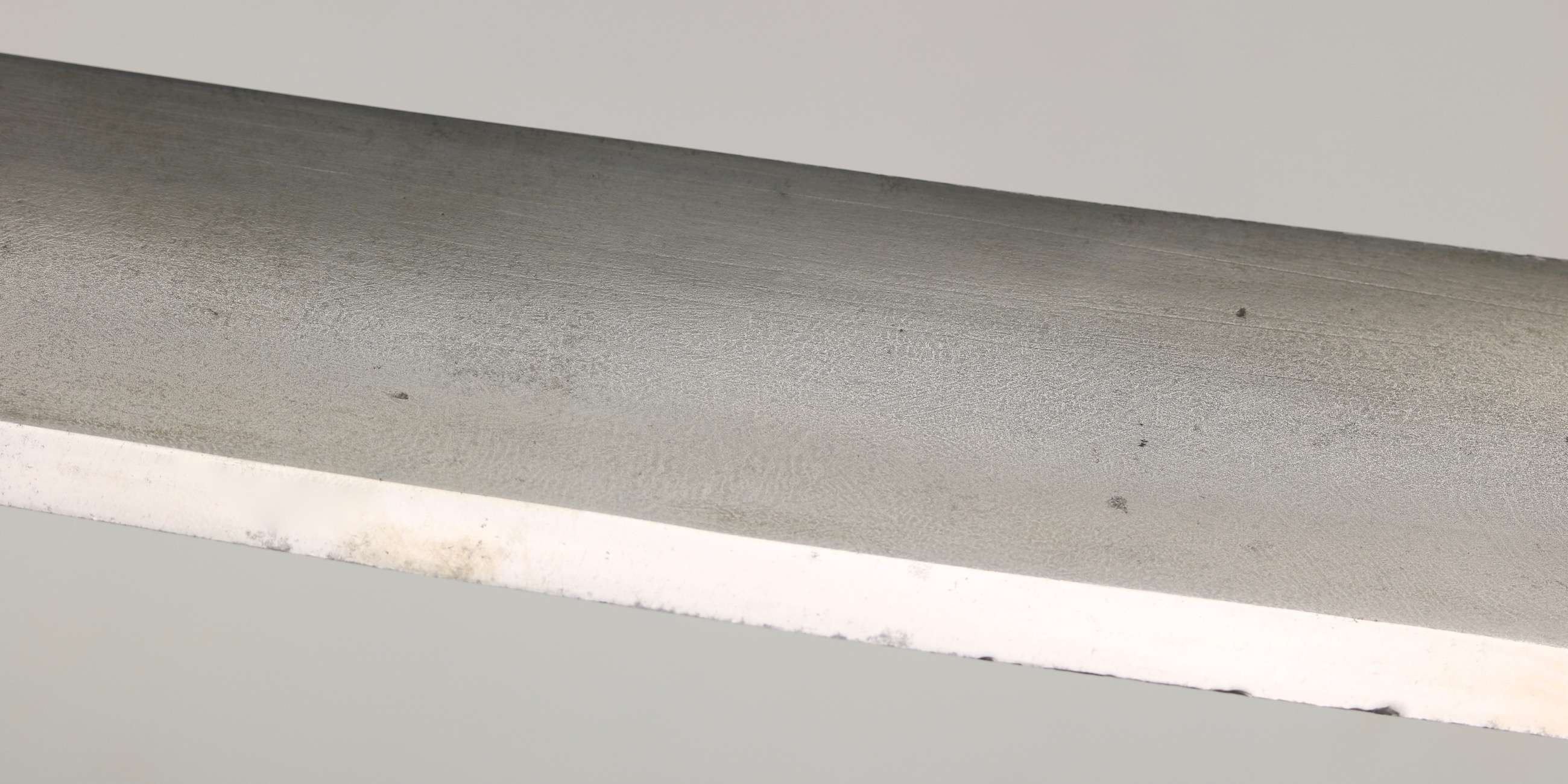 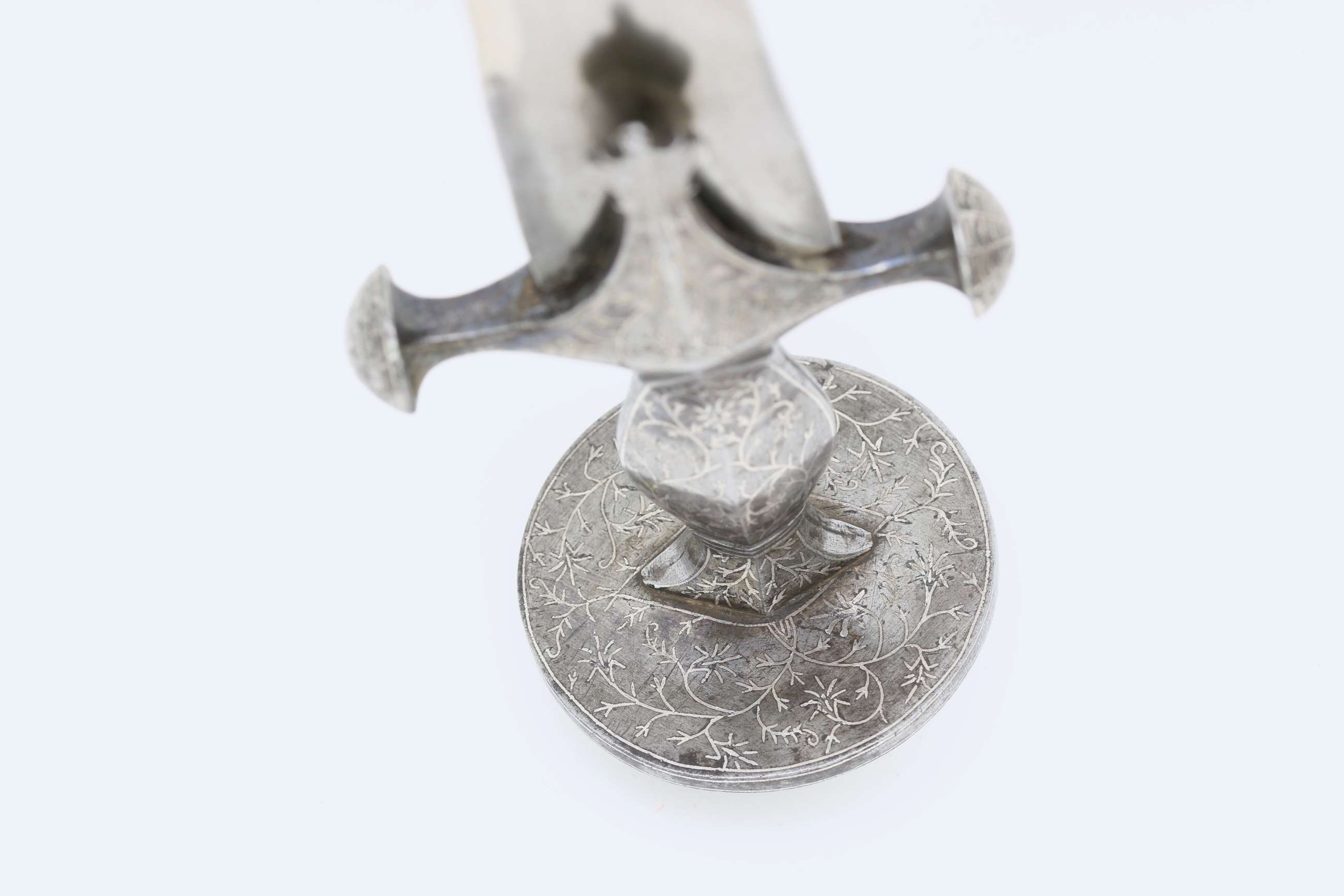 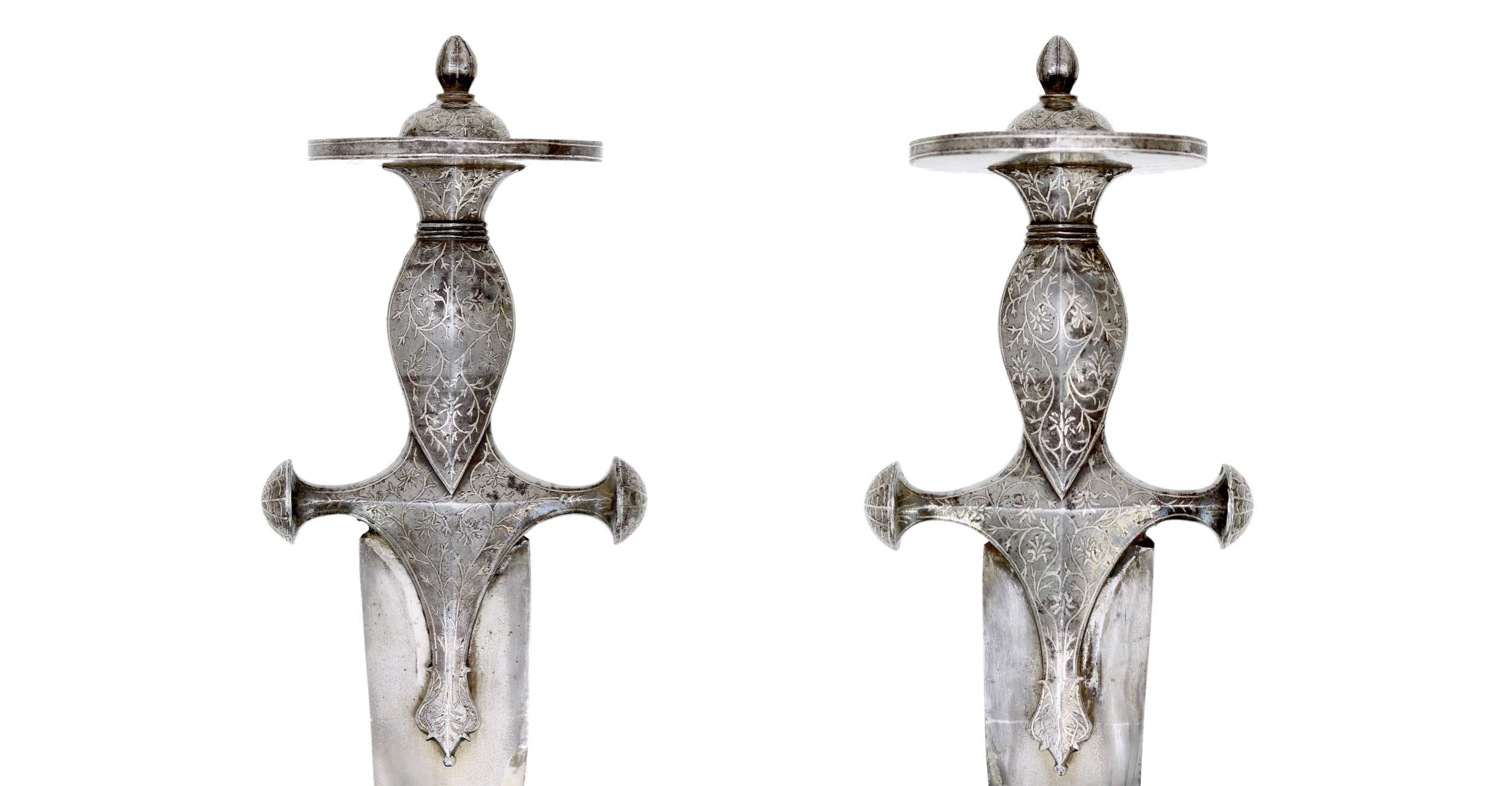