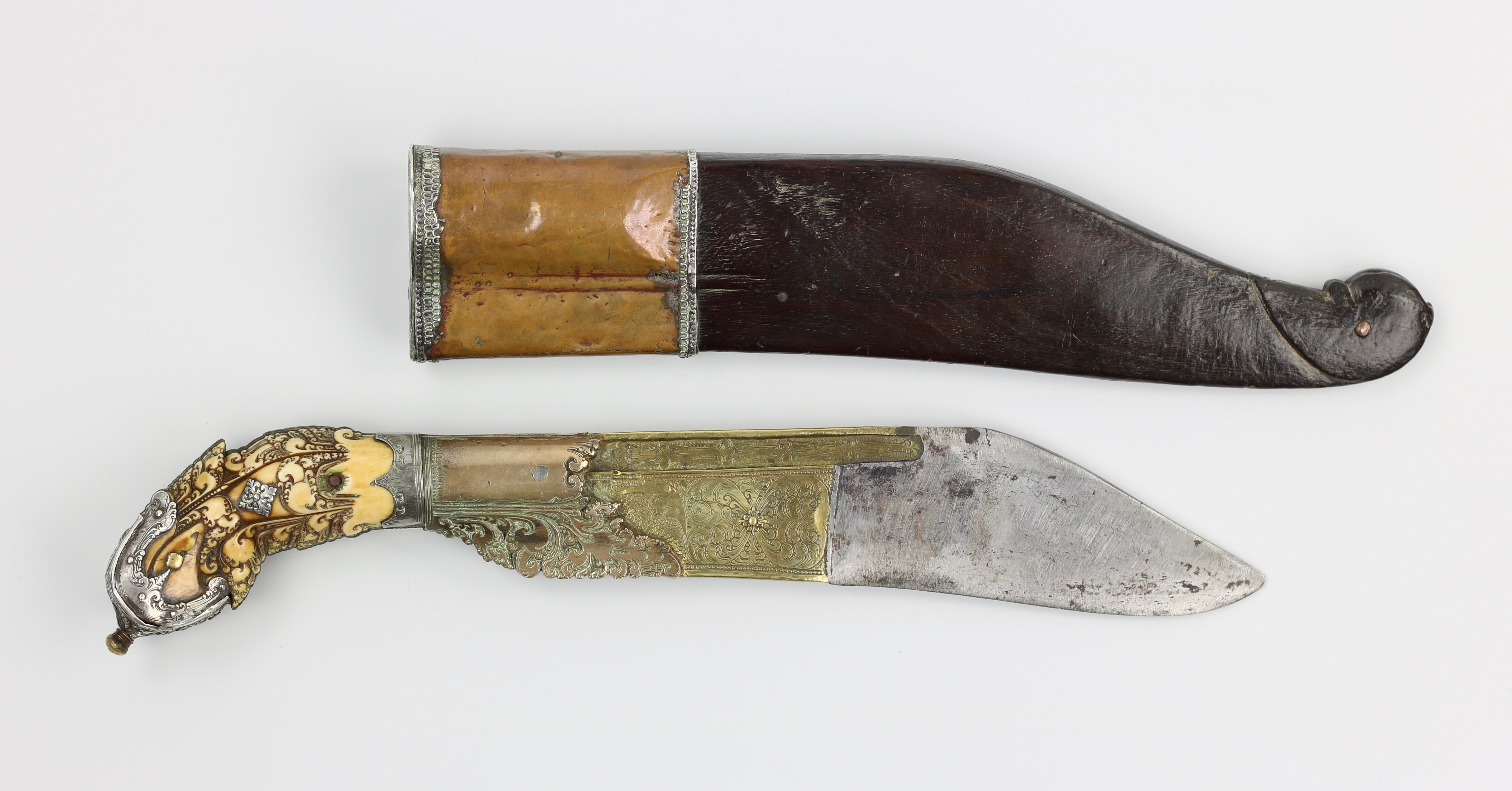 Ahead of collar 10 mm

Ornate Sinhalese knives today are indiscriminately called piha-kaetta by dealers, collectors and curators alike. A glance in the literature on the subject gives a more nuanced image, where only the larger chopper or billhook type is actual piha-kaetta, romanized today as pihiya kättha.1

Here is an example of such a Sinhalese knife.

A classic example with the wide, heavy blade with a recurved edge on a bill-like blade from which they derive their name. This piece is unusual only in its size and weight. At 800 grams, it is as heavy as many standard military sabers. 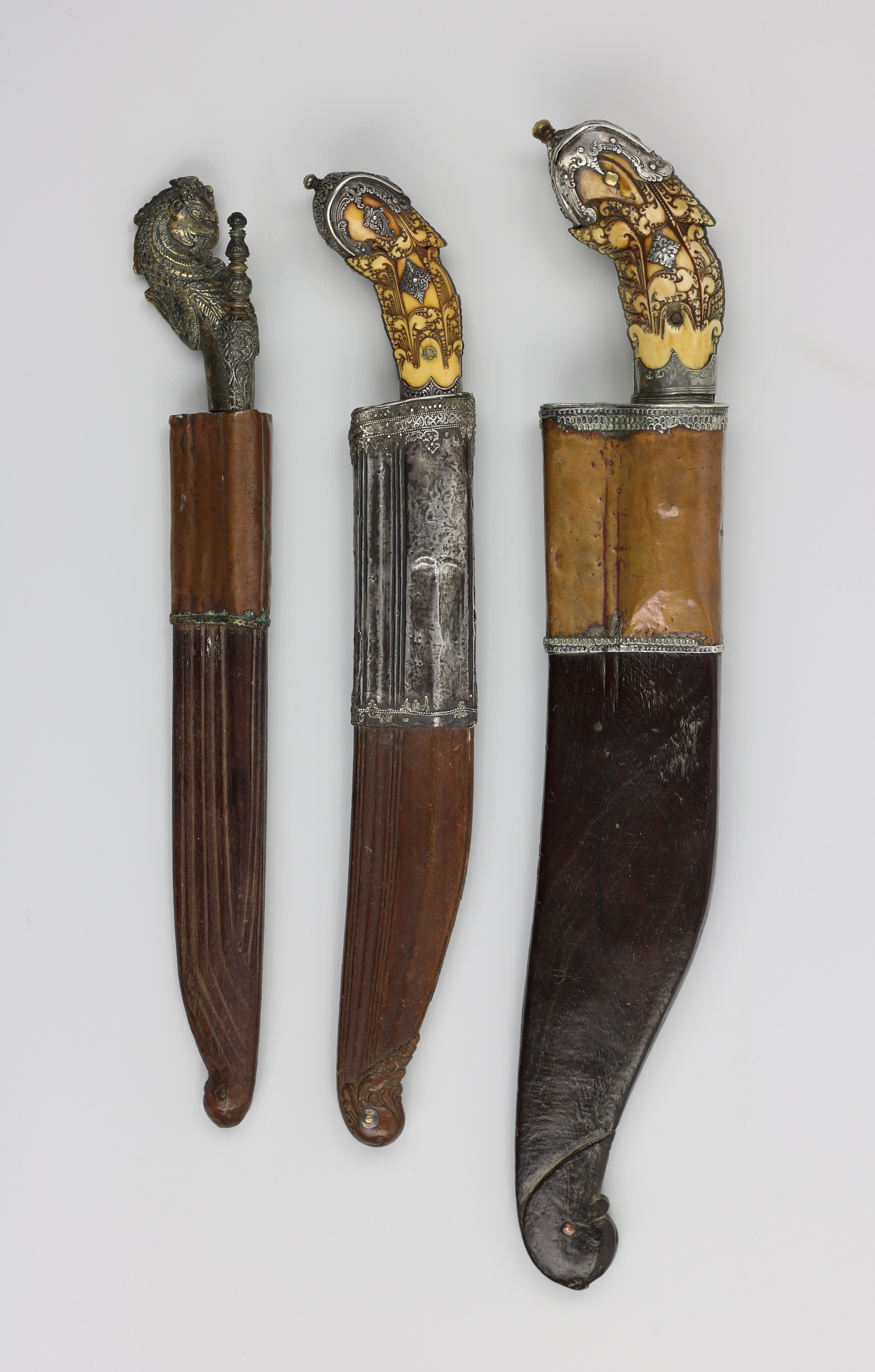 This knife on the far right, compared to two standard size Sinhalese knives.

The thick blade has a deep and wide groove on each side. The groove, spine, and part of the blade's surface area are covered with brass sheet engraved with Sinhalese classical motifs.

In the center of the panel on the blade is a small rivet with a cross-shaped ornament from which sprays of foliage emerge that turn inward again. In the groove is a repetitive pattern of stylized honeysuckle.

The spine is decorated with a geometric pattern called dẹla ("netting") with lozenges, each with an engraving in the center. Coomaraswamy suggests these are either stylized feathers or pineapple skin.2

Between blade and handle is the characteristic collar piece made of a gold-copper alloy (suassa). It exhibits an abundance of liya-pata, curled ornaments so typical for Sinhalese arts. They used to represent a bird's tail on earlier, bird-head hilted examples of these knives. Highly stylized by the 18th century, they are now a series of curls upon curls, upon curls. The finesse and complexity of the liya-pata are indicative of the overall quality of the piece.

The ivory hilt is also carved with an abundance of liya-pata, finer and more complex even than those on the collar piece. The grip is framed by silver mounts, and held by pins, the center pin with a silver washer. The pommel plate is worked in repousse, all silver decor in this section are in the form of Sinhalese vegetal motifs.

It comes complete with its old wooden scabbard. constructed of two halves, riveted at the end. The mouthpiece is of copper plate with silver ornamentation.

Very good condition throughout. Some losses to the silver on the scabbard. No losses whatsoever on the knife itself, only some denting in the silver sheet covering the pommel plate. Blade carries scratches from period sharpening.

A very nice and complete example of a pihiya kättha, the large chopper-type among ornate Sinhalese knives. It exhibits the fine craftsmanship and characteristic styles of decoration that are so typical of Sri Lankan work, combined with a weight and substance that is less common among these knives.

Notes
1. See the glossary article pihiya kättha.
2. Ananda K. Coomaraswamy; Medieval Sinhalese art: being a monograph on medieval Sinhalese arts and crafts, mainly as surviving in the eighteenth century, with an account of the structure of society and the status of the craftsmen, Second Edition, Pantheon Books, New York, 1956. Pages 107-108.

CITES
To meet the demands of the Convention International Trade of Endangered Species (CITES), this object is sold with an appraisal document from a certified Dutch appraiser of the TMV Federation. It states that the item is manufactured in the 18th century. The handle is of ivory of the species elephas maximus, listed on CITES appendix I.

Buyers outside of Europe: Beware that it may not be possible to export the item to your country due to restrictions on international ivory trade. CITES sets the minimal restrictions, countries and states under the convention often maintain further restrictions on top of CITES. 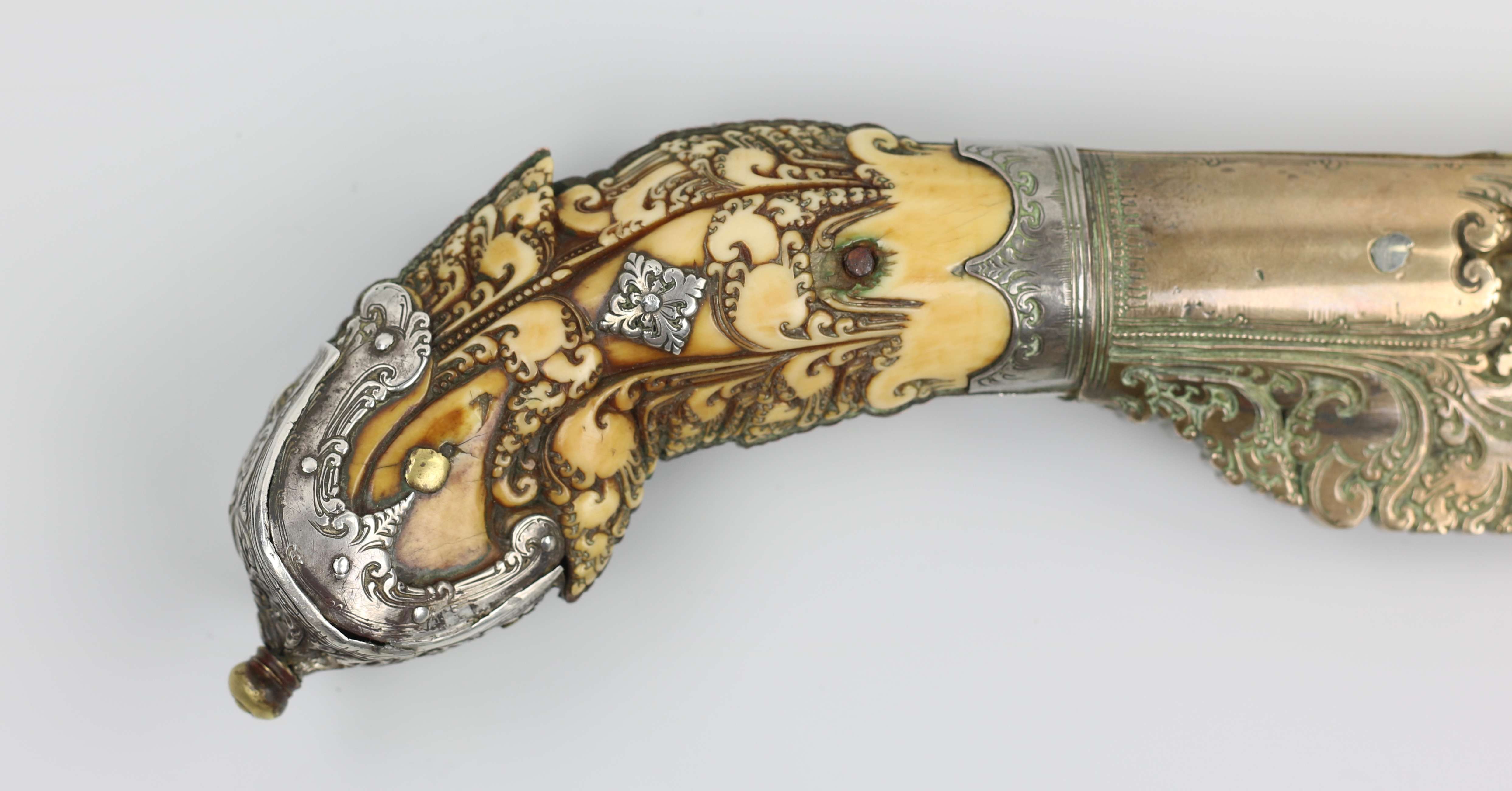 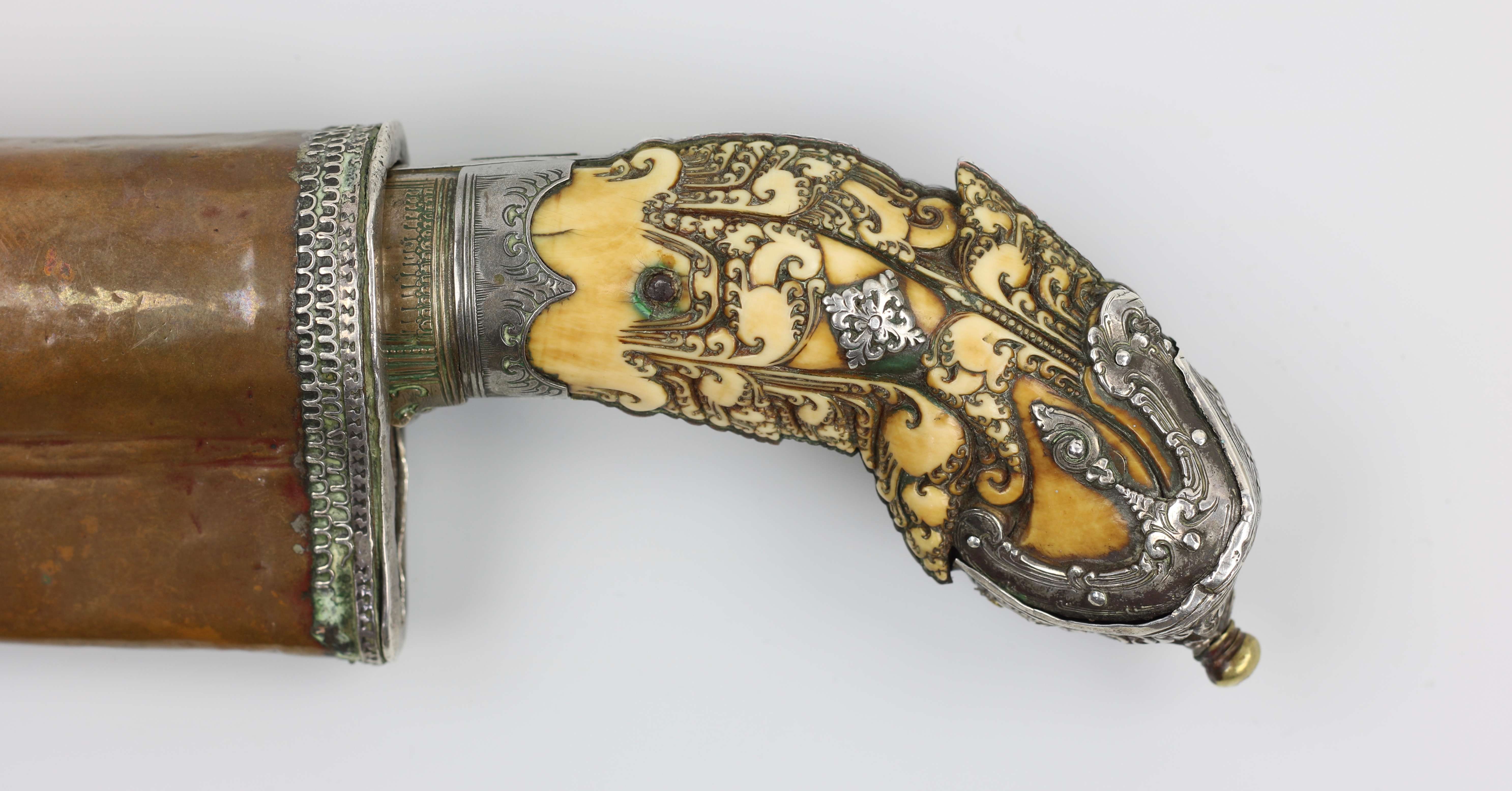 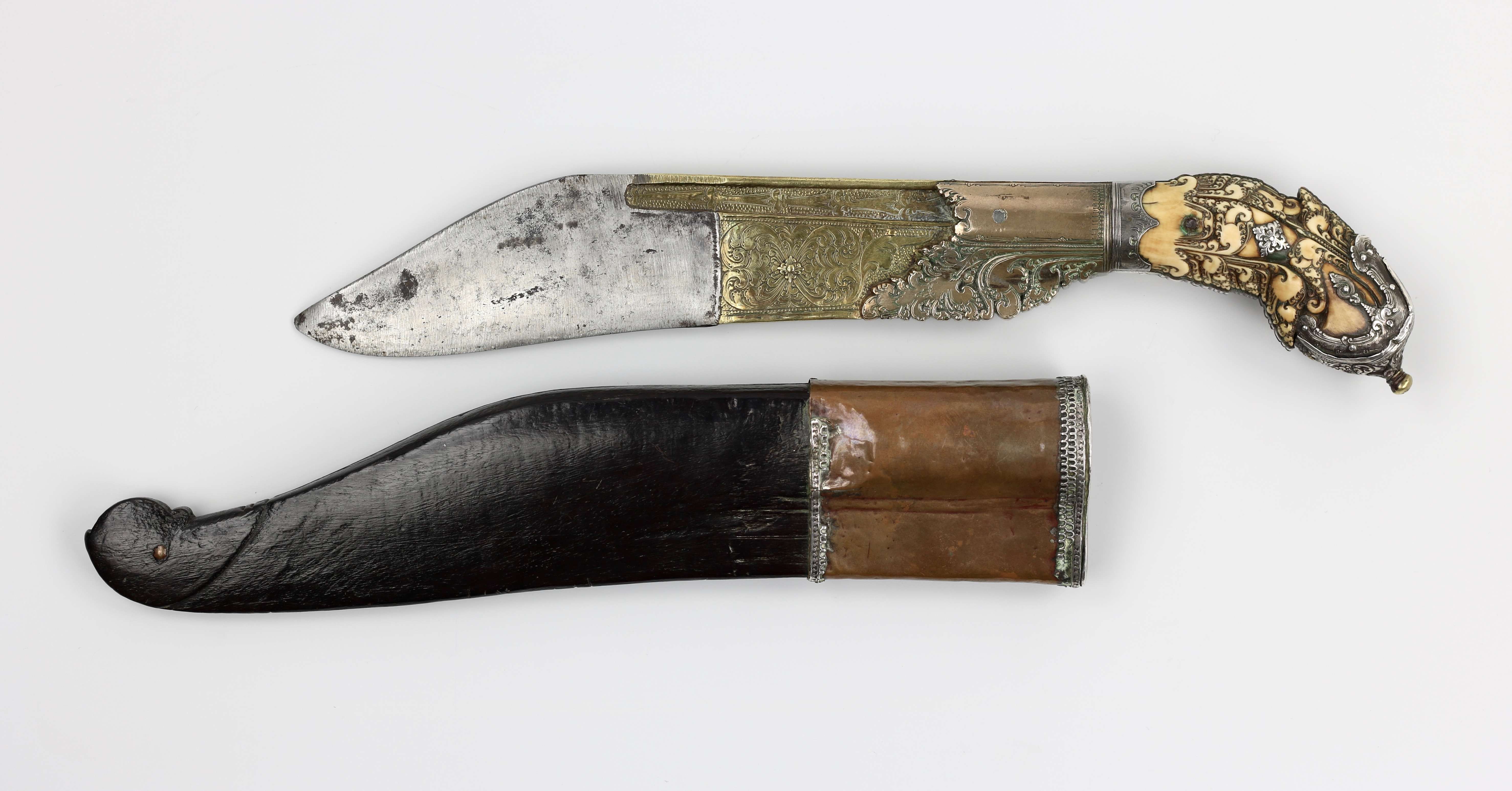 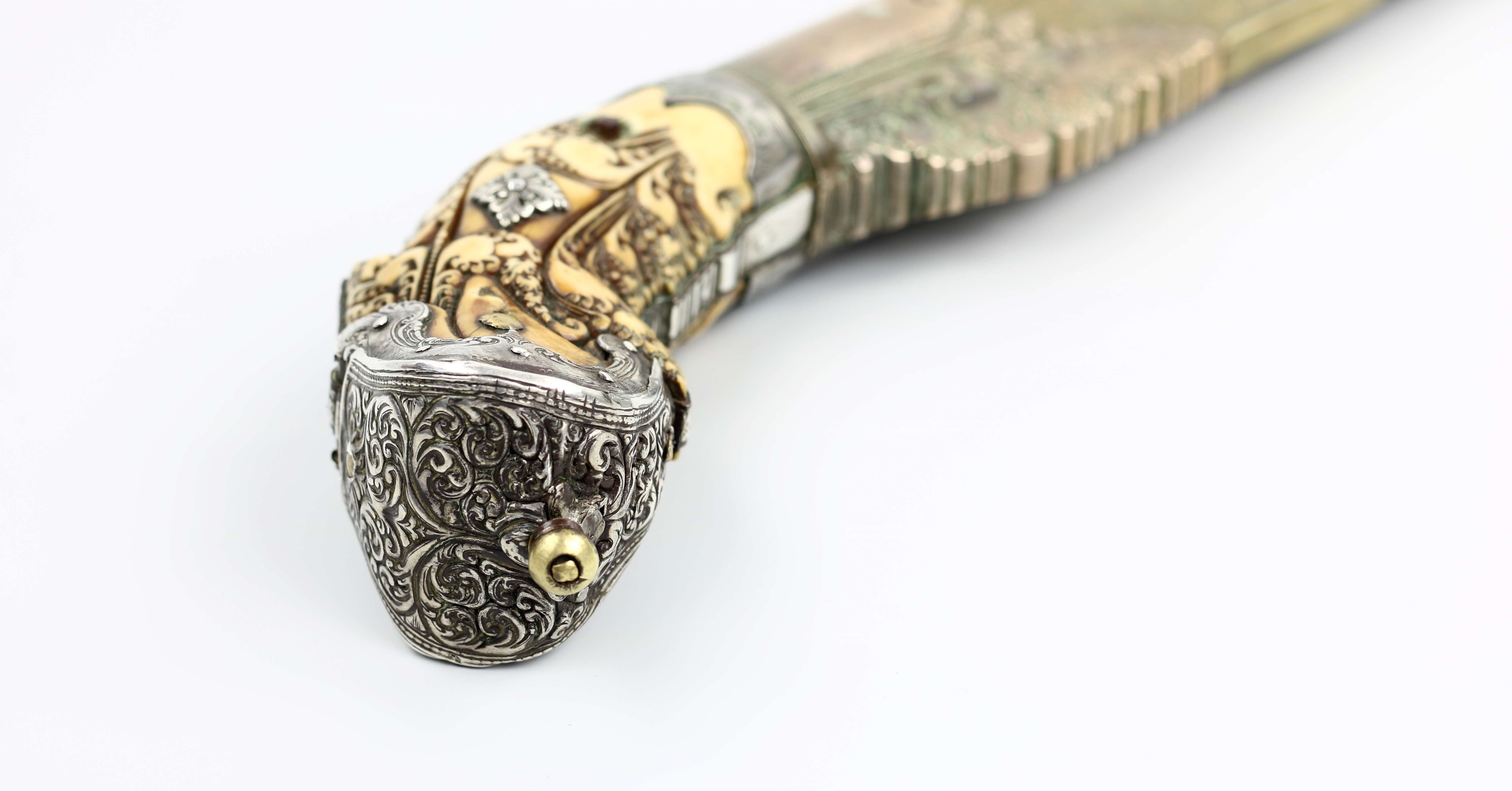 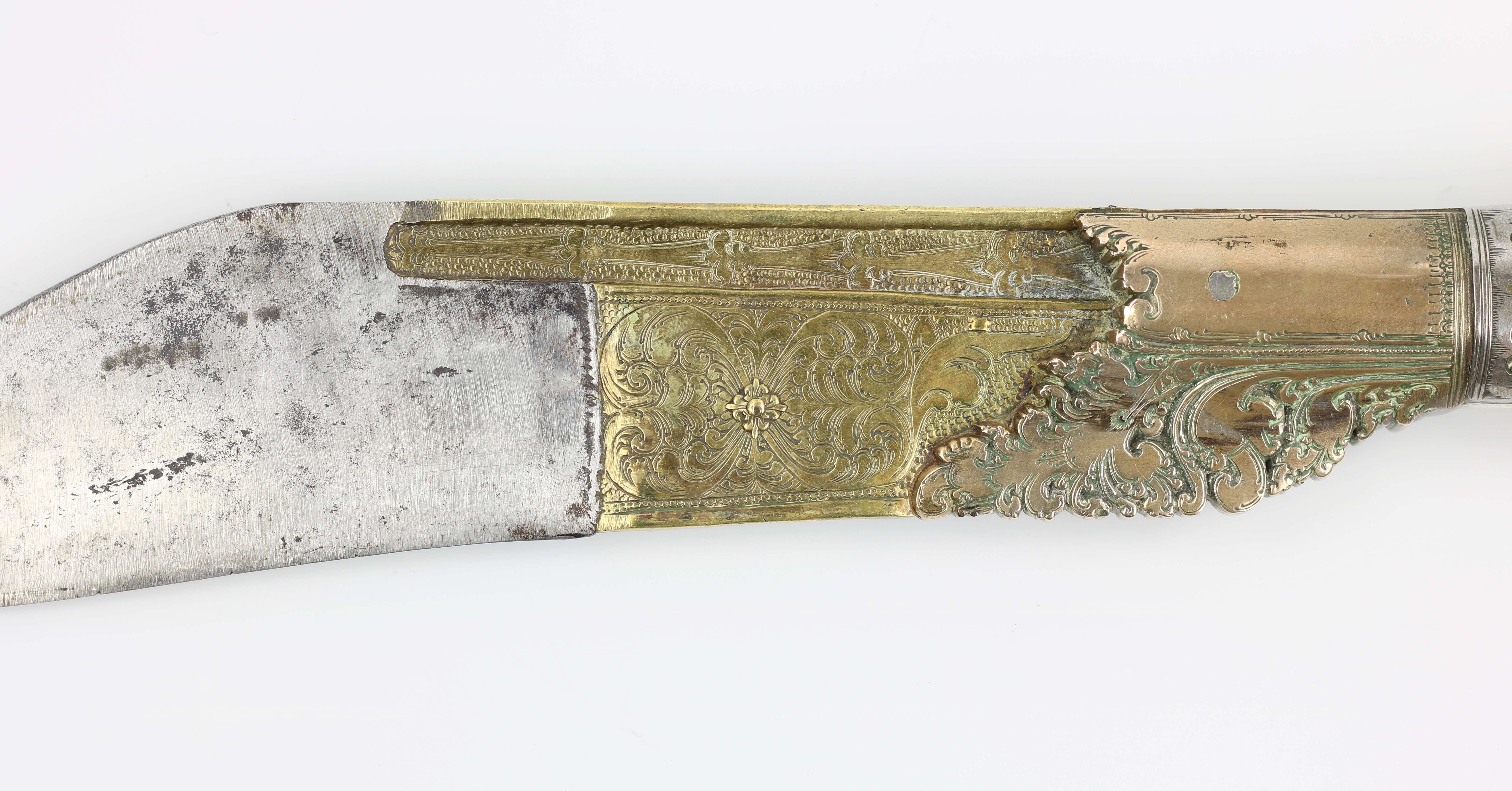 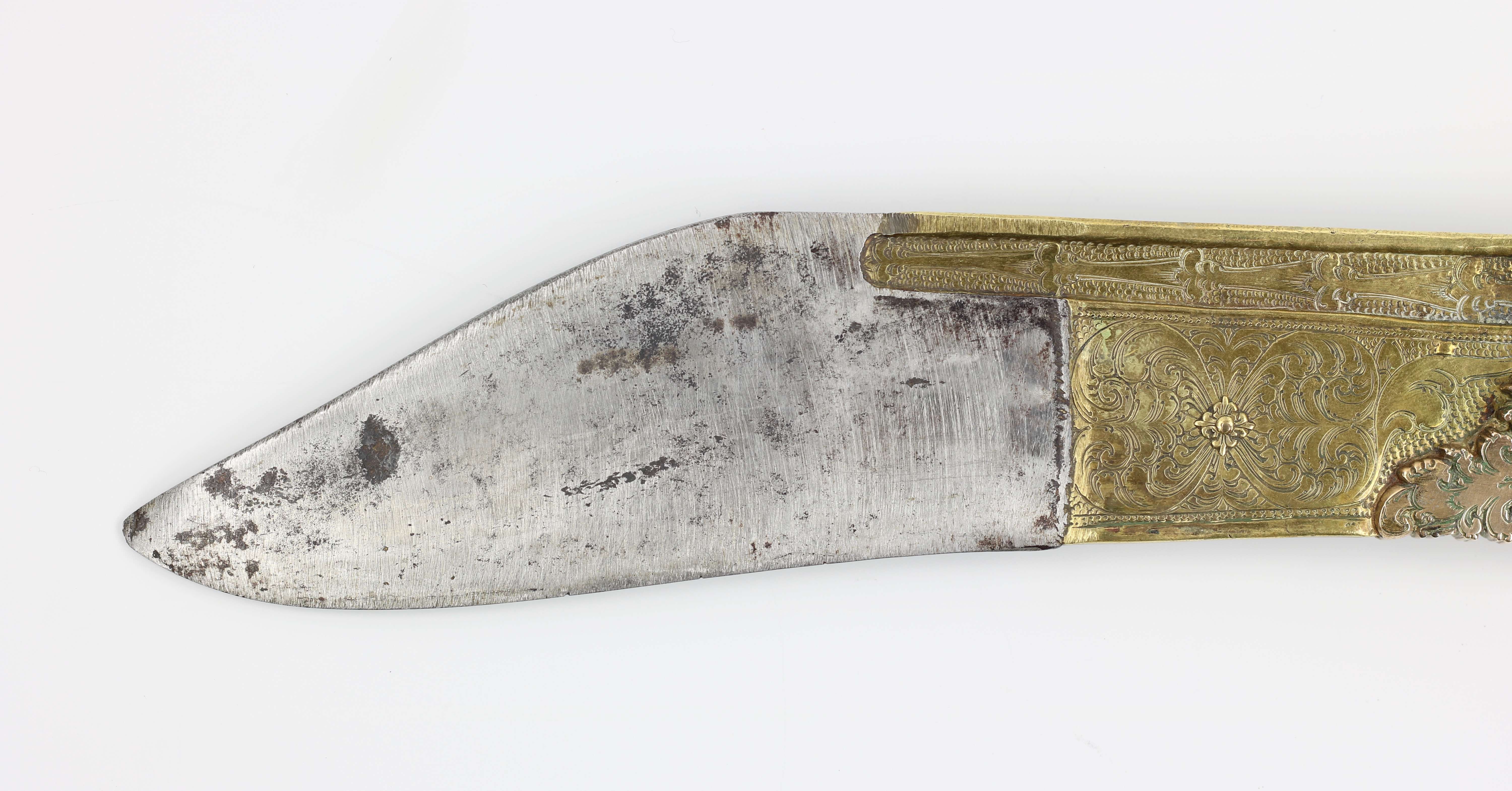 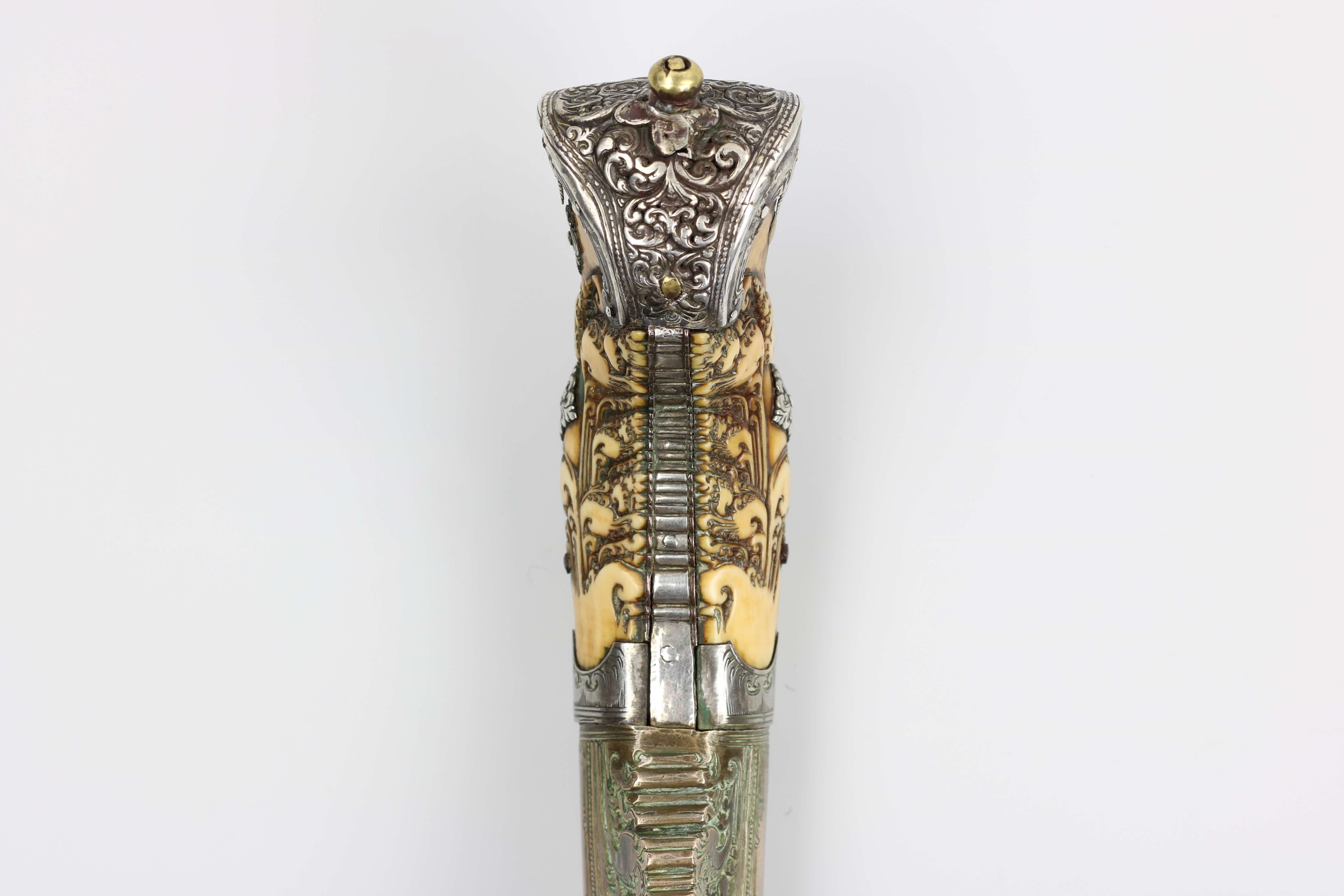 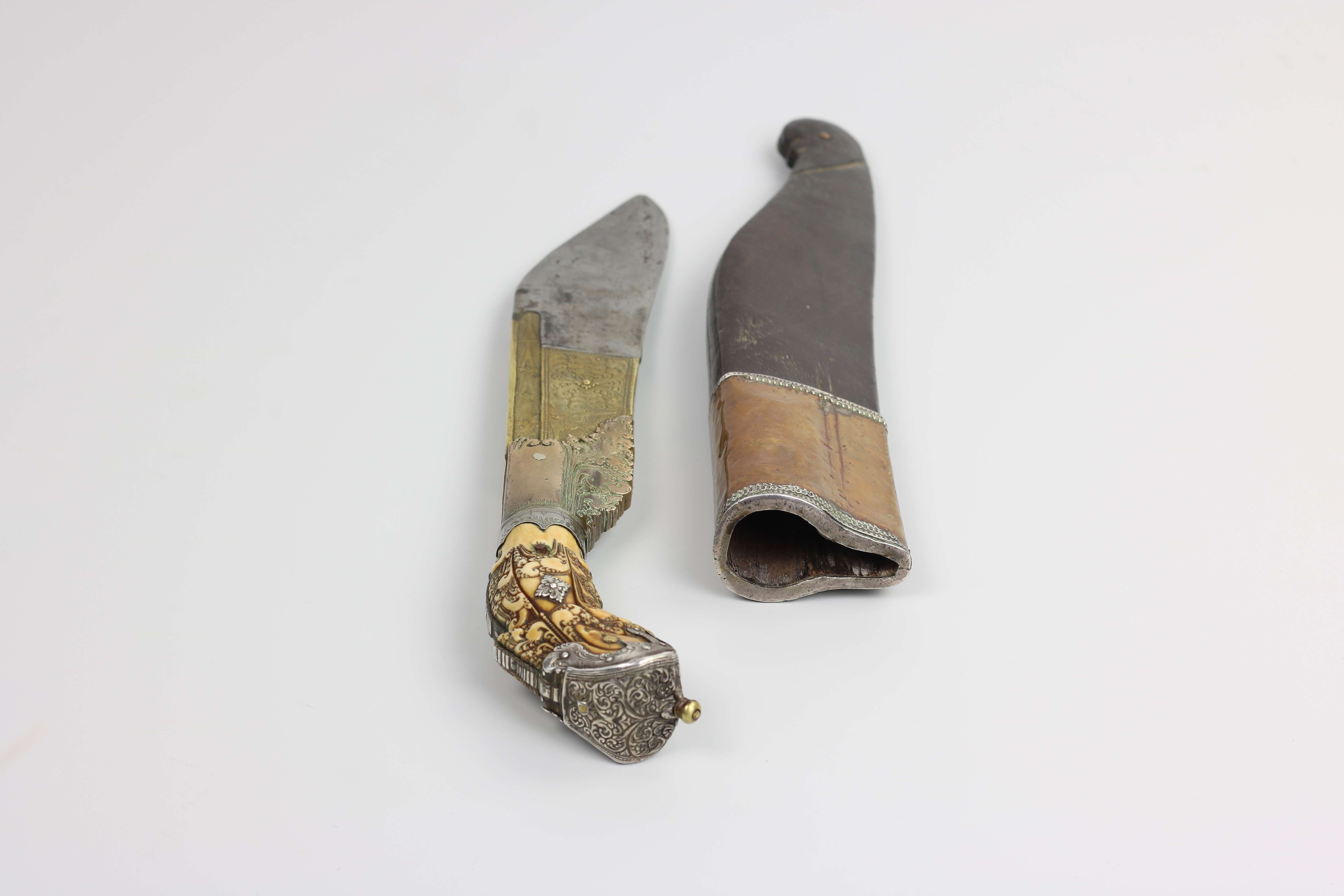