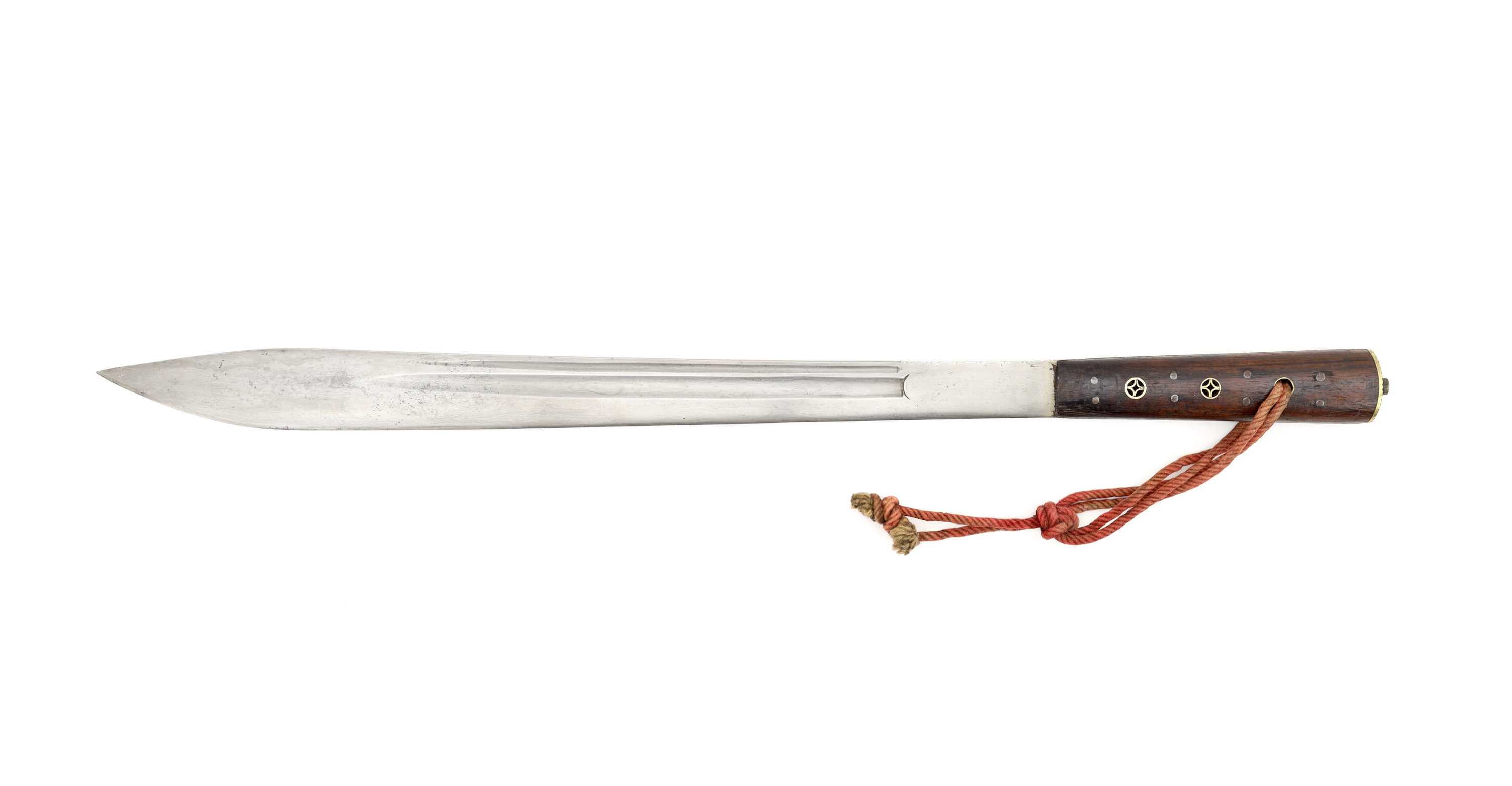 A Hong Kong based collector

An impressive Chinese knife that could be used as a hunting sword, machete, and fighting knife.

The substantial blade flares out gradually towards the tip, and then forms an assymetrical triangular point. There are two grooves on either side of the blade, a wide one and a narrow one above it. The wide grooves start with a crescent moon engraving and gradually fade into the tip.

The spine is filed at the base with a stylized representation of the sections of a bamboo stalk, and then turns into a ridged spine.

The blade is made with an inserted high carbon edge around milder forge folded steel layers. A construction called jiā gāng (加鋼). Both flats of the blade show the fine layering structure of the steel. The forging is remarkably tight, with no flaws. Blade in excellent condition, no distortions to edge contours and bevels, no edge damage, no pitting.

The hilt construction is a strong full-tang, with wooden grip scales riveted to each side with 8 rivets. In addition, the pommel is peened over a ribbed brass butt plate. Three holes are drilled through the hilt, two are filled with brass stylized coin motifs, the third one is left open and still retains an original, red cotton wrist lanyard.

In recent polish by Philip Tom, it comes with a plain wooden storage scabbard to protect the blade.

This large fighting/utility knife is closely related to the shùndāo (順刀). See my glossary article. However, shùndāo literally means "parallel knife" and it is named so because edge and spine run more or less parallel on these. This version of the knife has a tip that widens considerably, while it flattens in thickness. Functionally, it creates a deeper curve near the tip on the thinner blade, excellent for slicing while giving up some of the strength and rigidity associated with the regular shùndāo.

We can draw a direct parallel to the Chinese niúwěidāo (牛尾刀) or "oxtail saber" that increases the cutting ability of its tip section in the same way. Probably not coincidentally, the groove combination and bamboo-section file work found on the spine are identical to some similar work seen on niúwěidāo.

With this in mind, it is likely that the knife dates from around the same period as the early adoption of the niúwěidāo which started around the 1850s.

Oversized shùndāo were used by Manchu and Mongols, among others were carried by elite Qing vanguard troops of the Manchu banners. They probably used it for clearing areas for encampments, hunting, and the occassional confrontation.

Because the edge and spine are not parallel, perhaps lièdāo (獵刀) "hunting knife" is more appropriate for this particular variety. 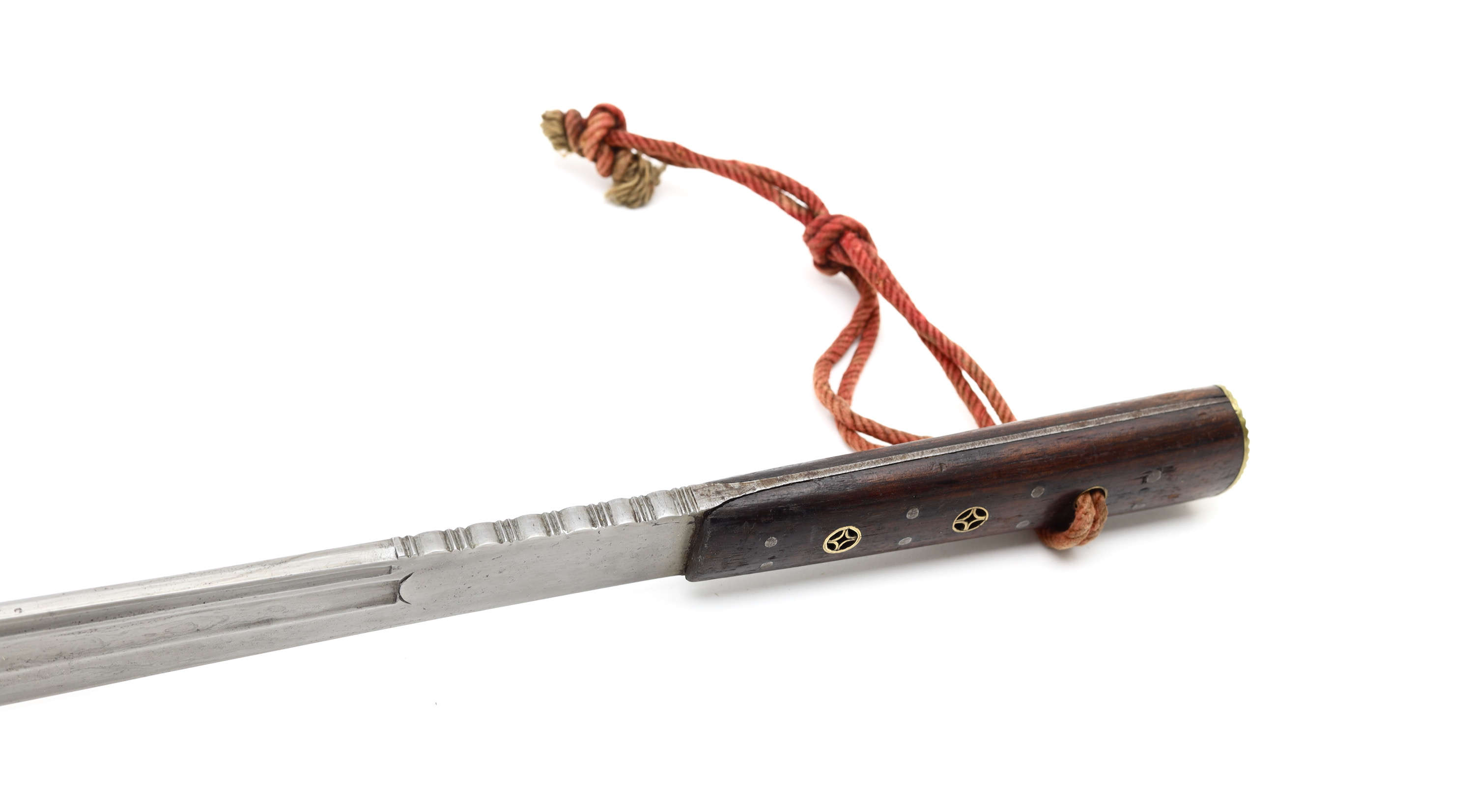 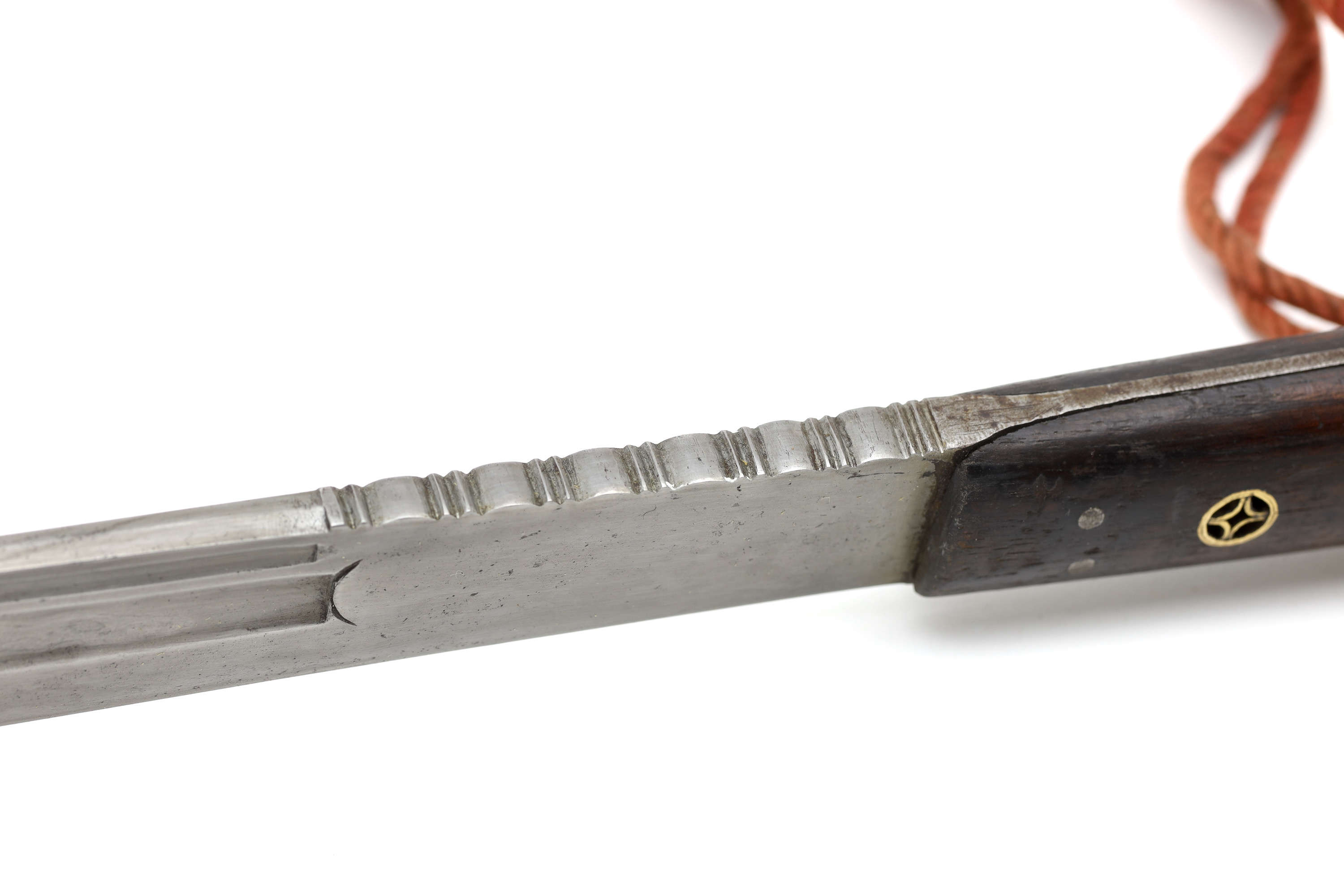