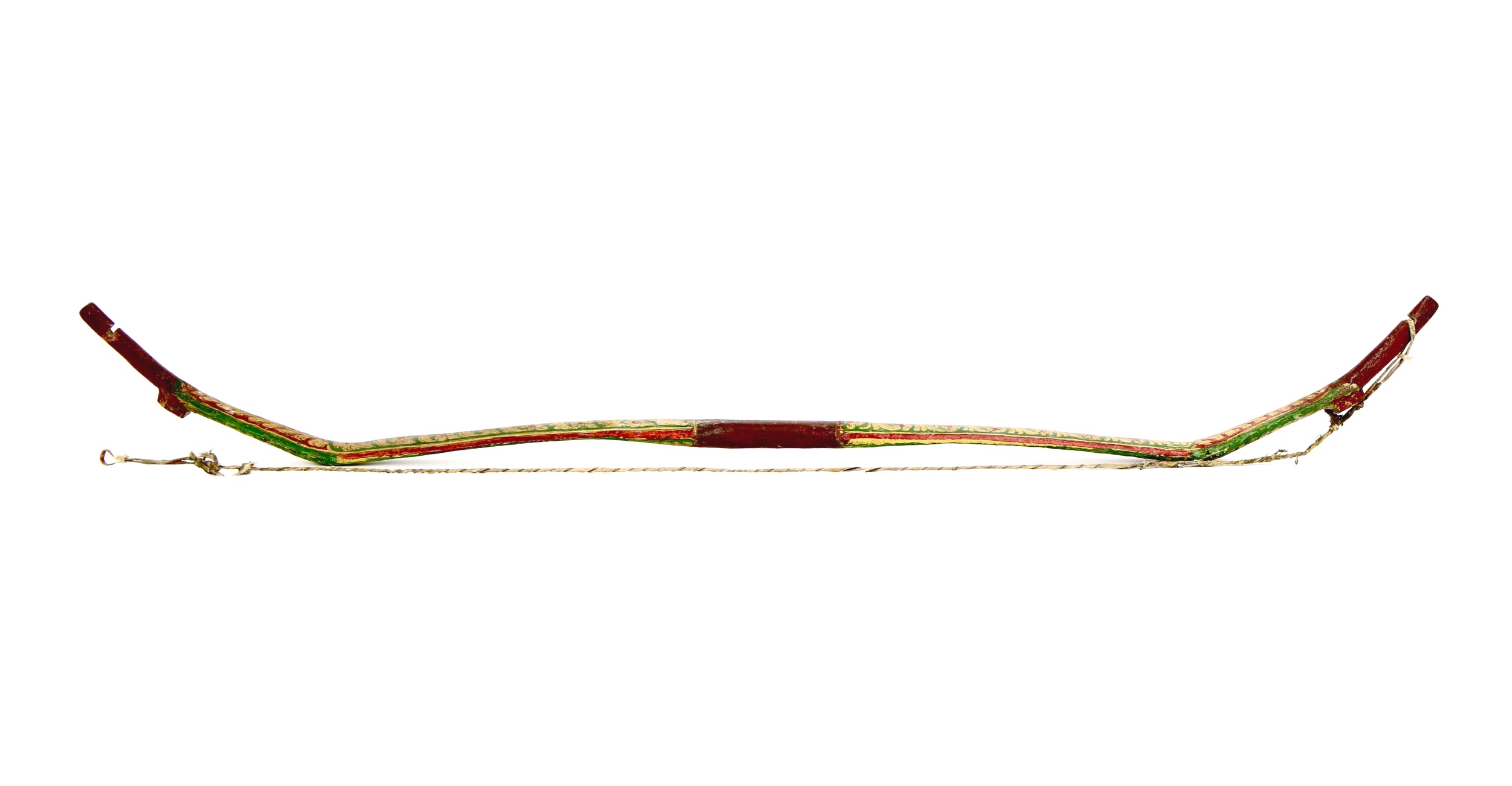 (tip to tip over belly)

Asian composite reflex bows are a broad family of bows that were used from Europe to the Far East. They gained military fame in the hands of powerful steppe armies like the Scythians, Parthians and Mongols. Many cultures had their own take on the design, with the Manchus developing a variety that could launch huge arrows to help down large game they were hunting. The Ottomans elevated flight archery to a high art form, and set world records with their bows that still stand today.

A very rare bow from Central Asia, probably from the region around Samarkand, Uzbekistan.

It is large, with thick and wide limbs and must be of considerable draw weight.

The bow is entirely finished with lacquer on top of a rather thick layer of some sort of filler. The final finish is done in bright colors of yellow, red, and green in traditional floral motifs.

The bow was scanned and surprisingly turned out to be made with thick bamboo limbs with additional wood in the handle and the ears spliced in. See this Facebook post.

The string is made of twisted rawhide with rawhide string loops. There is some yellow pigment on the string as well.

The bow's design reminds strongly of Indian and to some extent Persian bows, primarily the shape of the rigid ears with a pronounced "kasan" section, and the fact that it is completely covered with lacquer, without horn being exposed.

Size-wise it neighs more towards the larger Manchu bow that was popular across Qing dynasty China, and which was exported to and used in this region as well.

Functionally, it is probably a bow that could shoot a fairly heavy arrow accurately at medium distances.

Exact comparables are very rare. A very similar example to the one in this article was purchased by a UK based dealer from a German collector who reportedly purchased it in Uzbekistan.

A somewhat similar bow is displayed in the Gardner D. Stout Hall in the American Museum of Natural History, New York. Accession number 70.2/ 4776. Acquired in 1963 from Dr. Louis Dupree. The museum does not give any further information, but Dr. Dupree was an archaeologist, anthropologist, and scholar of Afghan culture and history. He and his wife Nancy Hatch Dupree worked from Kabul for 15 years, where she headed the Afghanistan Center at Kabul University.

There was a bow in the Karl Zeilinger collection, described as "Turkestan composite bow" that has identical surface finish and decoration, but much more recurved ears, more akin to North Indian bows.1

A black example made with strips of horn, exposed, is in an American private collection. It was collected in the Hunza Valley region in northern Pakistan, bordering Afghanistan, Xinjiang and close to southern Tajikistan.

Two bows from the Hunza region are in the Grayson Collection. According to the records, one of them, accession number 1994-0830 was presented to Charles Grayson by "a prince (Mir) of the Hunza royal family who was a friend of Ed Noack (Sacramento, CA)." It remains unpublished. The other, accession number 1994-0829A is of a different type and was published in Traditional Archery from Six Continents.

All finding places seem to be within a radius of a few hundred kilometers, in a general area around the silk road trading hubs of Kashgar, Samarkand and Bukhara. This geographic area was the scene of the Bokhara kingdom, the Kashgar kingdom of Yakub Beg, and the Turcomans of present-day Turkmenistan. All their armies are described as fielding mounted archers up until around 1830-1870, depending on the army. 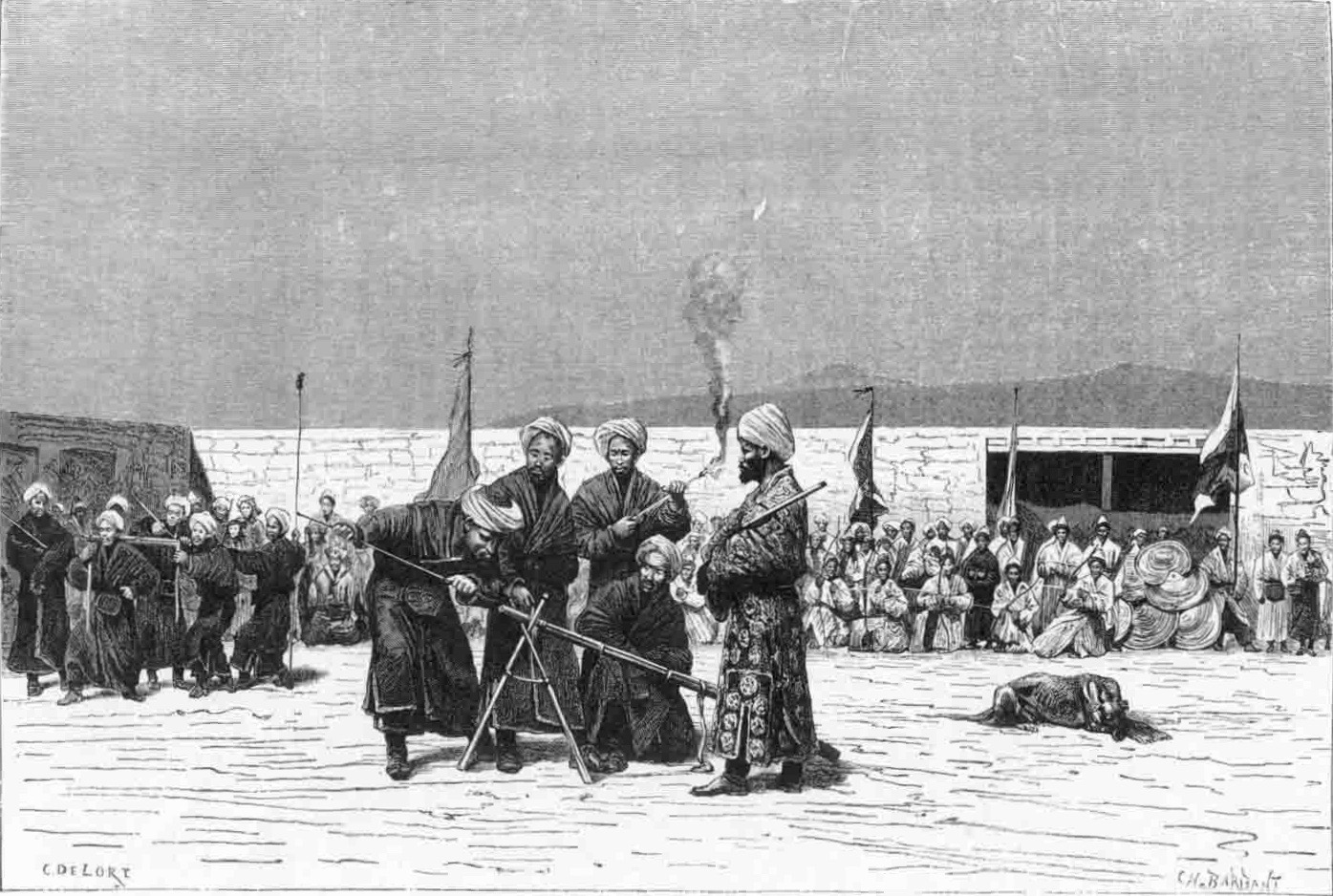 The illustration above shows Yakub Beg's men training for war. They were involved in the Dungan Revolt (1862–77) against the Qing Empire, then lead by the Tongzhi emperor. Notice the archers on the right, who seem to carry bows of about the size and profile of our bow here.

An interesting bow that combines design elements from the bows of major neighboring cultures. It takes on an almost Manchu-like size, unusual for the region, and combines it with ear geometry of the smaller Indo-Persian type bows used in Persia and North India.

Bows like this were in use by nomands and soldiers of Central Asia up to the 1870's.

A rare type of bow that is seldom seen, even in museum collections. 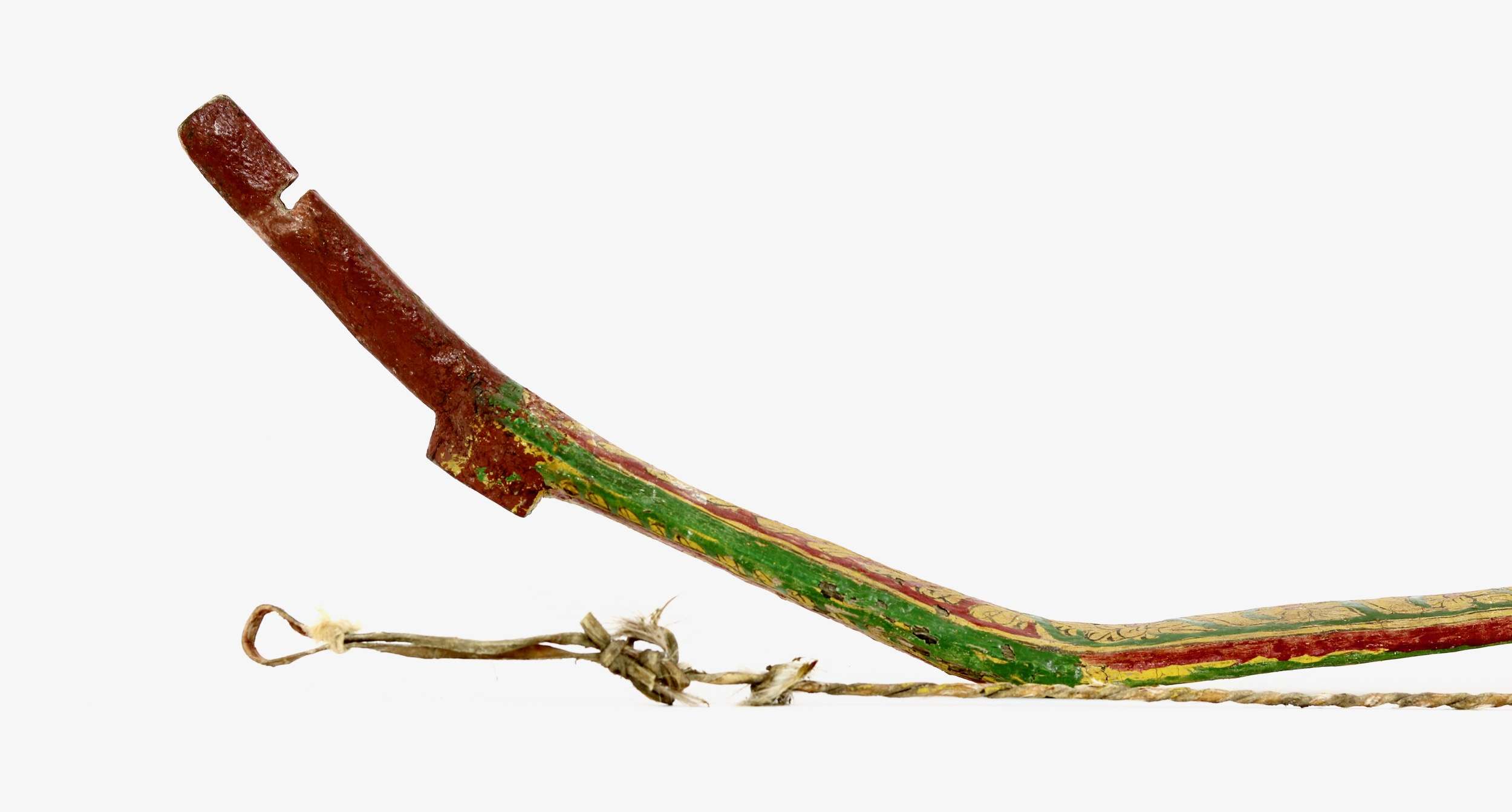