A large and very good khanjarli 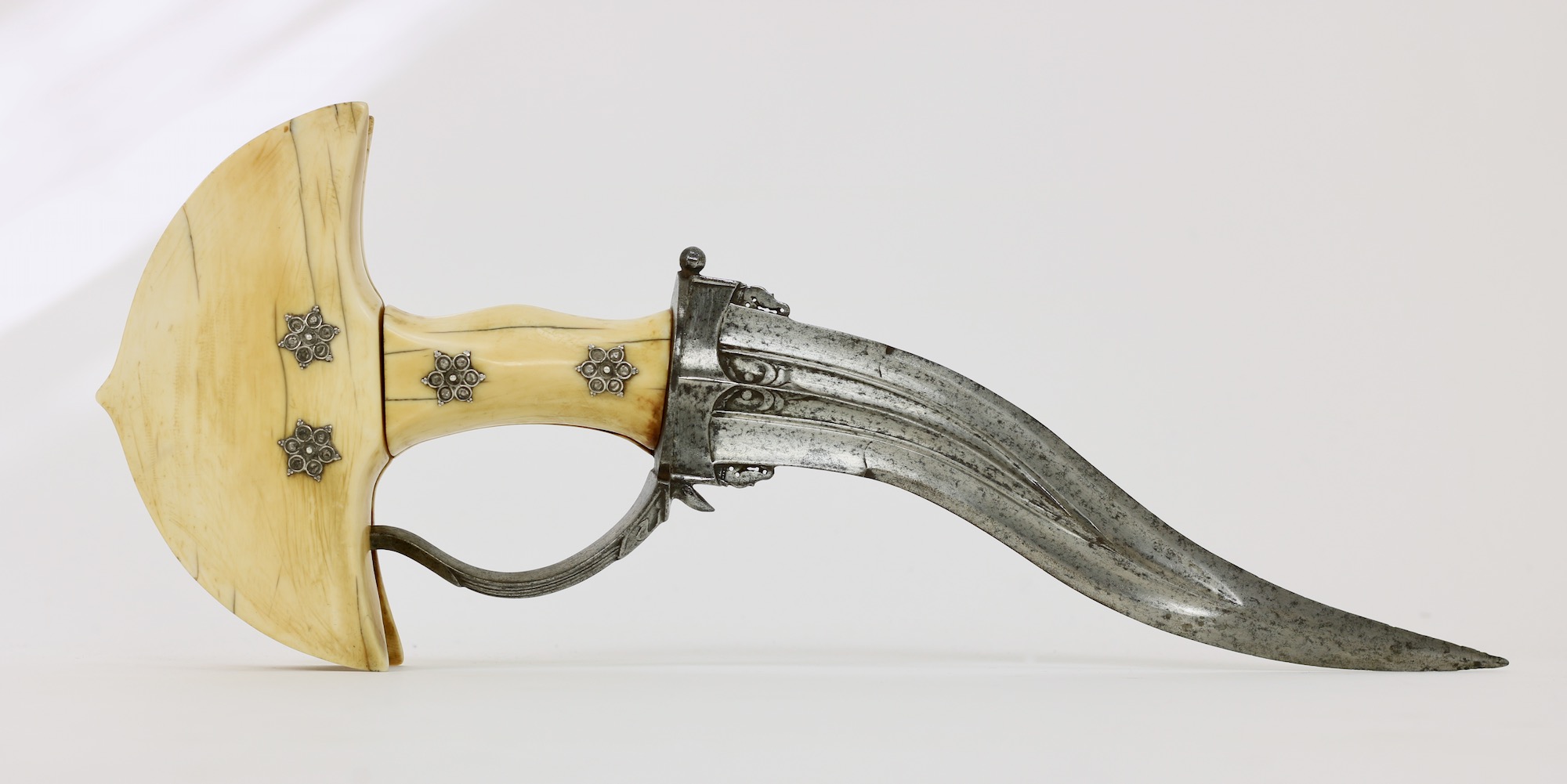 The daggers we now know as khanjarli are characterized by their recurved blade and large lunette pommels that are usually made of ivory plates. They seem to be a further development of the earlier chilanum, some of which have smaller pommels of similar shape. Khanjarli were probably primarily worn as status symbols for the wealthy, as they all tend to be of pretty good to superb workmanship. Most seem to date from the 17th and 18th centuries.

In literature, they first seem to appear in Egerton, who believed they were from Vizianagram.1 It is interesting to note that he describes a set of two of these as khanjarli and a single one khanjar. Stone notices Egerton's possible discrepancy in his Glossary.2 Khanjar simply means "dagger" in Hindi.

One wonders whether khanjarli is not simply some plural form of khanjar, it would certainly explain why Egerton uses these two words describing similar items on the same page of his book. Elgood argues that especially the ivory plated versions are more likely to be from Orissa, where there was quite an ivory industry at the time.3

Lacking a better alternative will stick to the name khanjarli for now.

Notes to introduction
1. Lord Egerton of Tatton; Indian and Oriental Arms and Armour. Dover Publications; Revised edition, 2002. Plate X and numbers 500, 501 and 504.
2. Stone, George C.; A Glossary of the Construction, Decoration and Use of Arms and Armor: in All Countries and in All Times. (Reprint) Dover Publications, 1999.
3. Elgood, Robert; Hindu arms and Ritual, Eburon Academic Publishers, Delft, 2004. Pages 179 and 202.

A fine and exceptionally large example of a khanjarli. The recurved blade with a center ridge and complex channeling, all still incredibly crisp. Blade construction cannot be seen in its current state, but these all tend to be made of pretty good wootz steel. At the base of the blade is ornamentation in the form of a lotus bud in the center and a stylized elephant head on either side, a remnant of earlier chilanum decoration where the elephant heads are more clear. The blade terminates in a disc guard of a shape typical for Deccan chilanum, that other out-worldly Indian dagger design. It also features a finely shaped knuckle-guard with faceted inside and ribbed outside surfaces that terminates in a beautifully rendered yali head. (Yali are mythical, often lion-like creatures common in South Indian art.)

The massive hilt is made out of four plates of ivory (Elephas maximus indicus), two of which form the characteristic lunette pommel plates, each 17mm thick and 14.3cm wide. This makes it possibly the largest of such features I've seen on this type of dagger so far. The pommel and handle plates are riveted to a flat steel tang and held in place by ornamental silver washers in the shape of six pointed stars.

A rather similarly shaped piece was once in the collection George Cameron Stone, whose collection was bequeathed to the Metropolitan Museum in 1936. It remains there under accession number 36.25.999. This piece is considerably smaller. Only 29.2 cm long, 10.8 cm wide and weighs 266.5 grams. This piece is significantly smaller, as most of them tend to be: The khanjarli in the Royal Danish Kunstkammer that entered the collection in 1743.

Tis example has a smaller lunette pommel, closer to the size of earlier chilanum daggers that indicate that the form had yet to reach full maturity. We don't know how old the piece was when it was collected, but if it were relatively new, that pushes the development of the more exaggerated models to probably around the mid 18th century.

A fairly similar but poor condition example can be found in the Royal Collection accession number RCIN 69756.

Two other examples in the same collection, accession numbers RCIN 38194 and RCIN 38194RCIN 38196 were presented to King Edward VII, when Prince of Wales, during his tour of India in 1875-76. Both were said to be from Vizianagram.

A predecessor of this style, in the form of a chilanum with ivory lunette pommel, was also presented to King Edward VII, when Prince of Wales, during this same tour. It was presented by Tukoji Rao Holkar II, Maharaja of Indore. Accession number RCIN 38194RCIN 37603. Indore is in the Indian state of Madhya Pradesh, to the West of Orissa and Vizianagram. What these locations have in common is that they were all Maratha territory in the 18th century.

And finally, an very nice and example was published by Robert Hales in Islamic and Oriental Arms and Armour: A Lifetime's Passion, Robert Hales C. I. Ltd., Guernsey, UK, 2013. Page 2. This piece came with a little portrait with a note on the back. The note stated: "Portrait of the Maharajah of Vizianagram. Presented with dagger to General A. N. Rich about 1855 for saving his life when attacked by a wounded cheetah.". This is a stunning piece with gold and rubies, undoubtedly reflecting the level of gratitude of the Maharajah.

A red thread among many examples seems to be the Vizianagram connection that Egerton already proposed.

Excellent quality and condition throughout, one very small chip in one of the ivory plates. Nice, original, untouched condition. See photos.

A very nice example of a rare type of Maratha dagger, commonly known as khanjarli. This example is exceptionally large, but with fine detailing in the steel.
It has everything: quality, condition, and a most gracious form for its type.

To meet the demands of the Convention International Trade of Endangered Species (CITES), this object is sold with an appraisal document from a certified Dutch appraiser of the TMV Federation, confirming that the item is manufactured in the 18th century. The handle is of ivory of the species elephas maximus, listed on CITES appendix I.

The item is within article 2 of council regulation EC NO338/97 and within Convention of International Trade of Endangered Species (CITES): The materials were removed from the wild and significantly altered from their natural state well before the date of convention: June 1st, 1947. In principle, it can be freely traded within the EU.

Beware that it may not be possible to export the item to your country due to restrictions on international ivory trade. CITES sets the minimal restrictions, countries and states under the convention often maintain further restrictions on top of CITES.