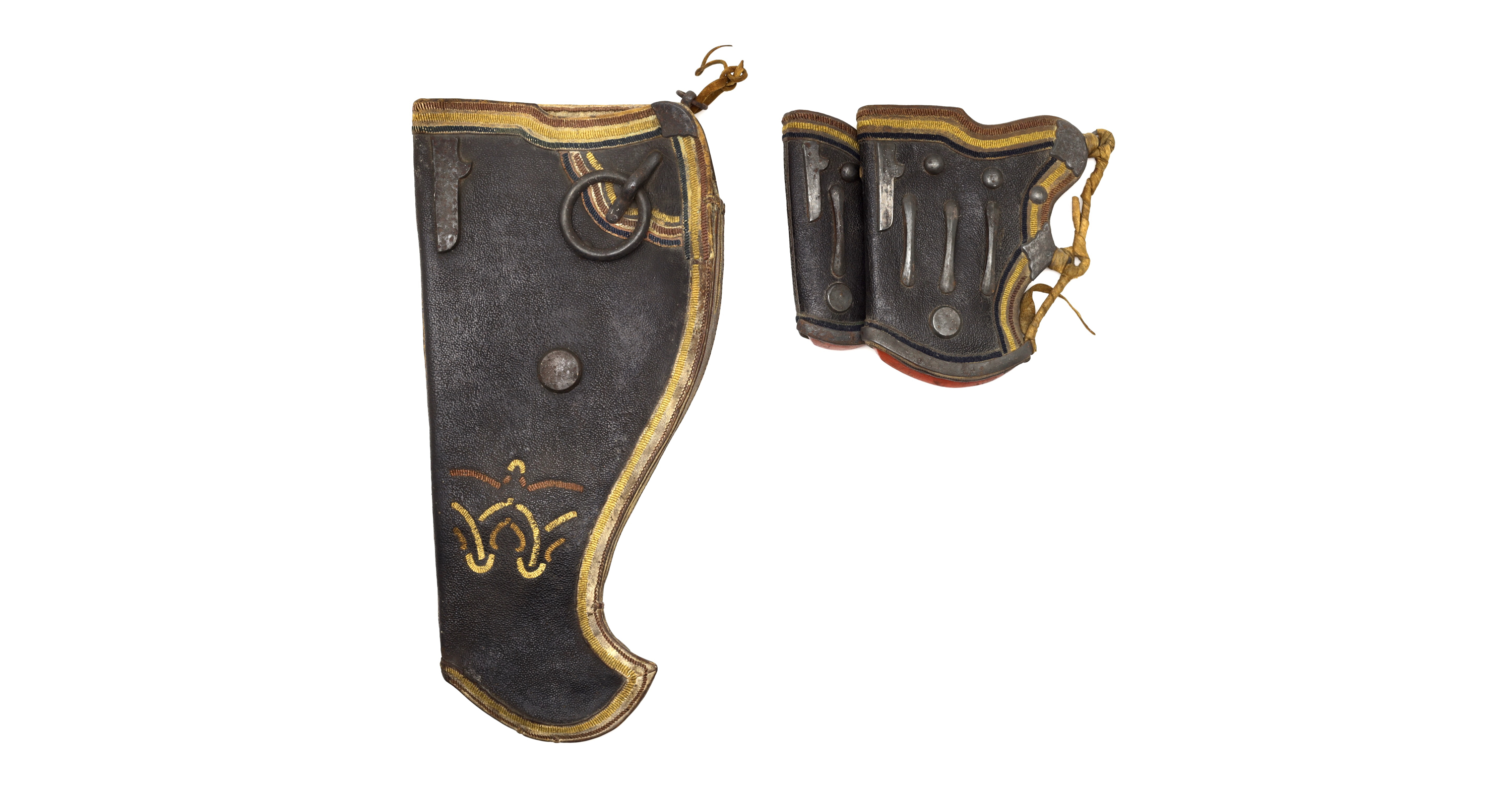 This item has been sold.
Read full article
Bowcase

Korean archers of the Joseon dynasty carried their bows and arrows much like most archers of Asia; a bowcase to the right and a short, open quiver to the left, worn on a belt.

Illustrations of such sets in use in Korea can be seen in early Joseon texts like the Gukjo-oryeui (國朝五禮儀) or "Five Rites of State" compiled in 1474 A.D. during the reign of King Seongjong. 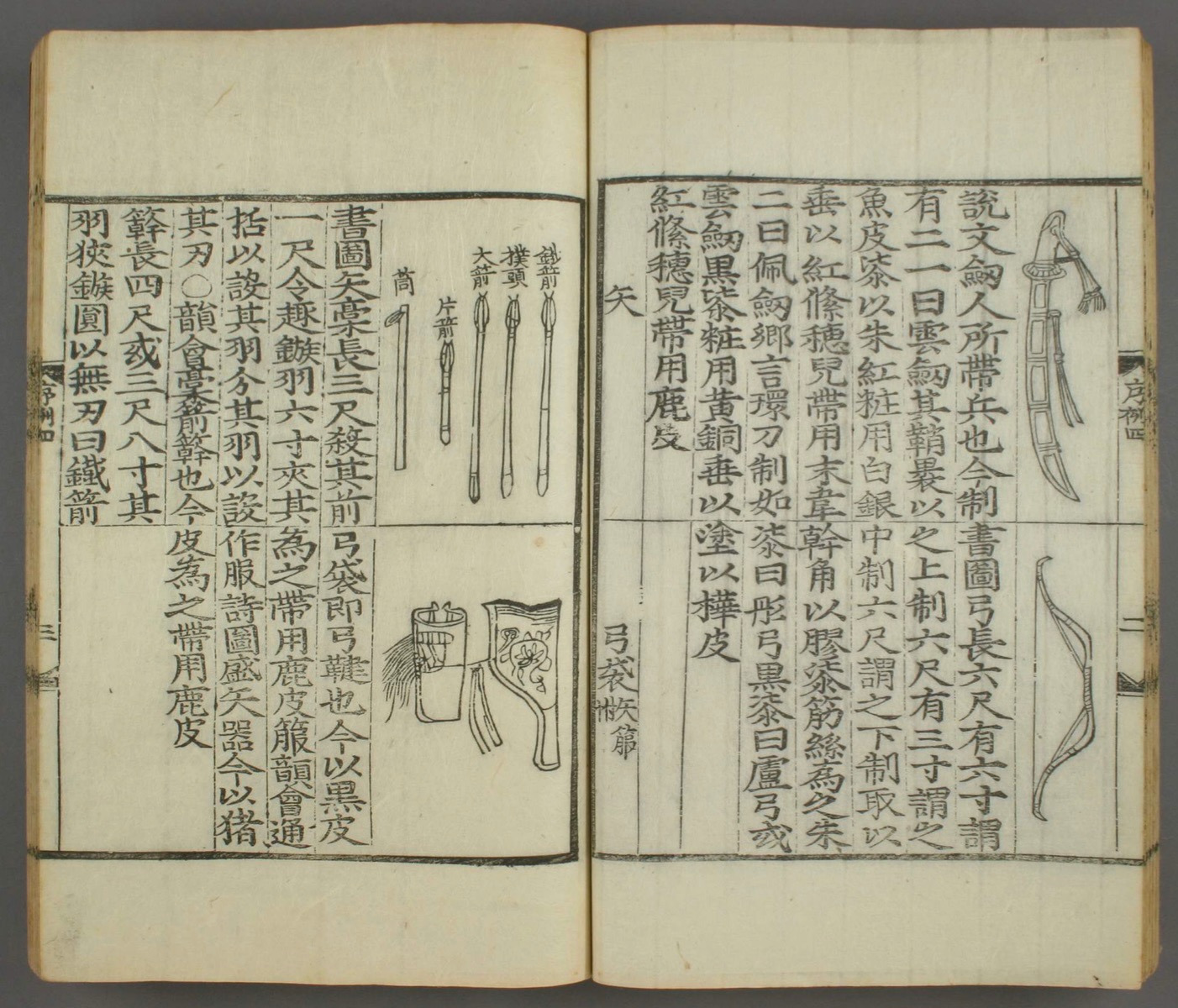 Most extant examples today date from the late Joseon dynasty and show close resemblance to Qing dynasty bowcases and quivers, primarily those of the 17th and 18th century.

Both are made of leather, covered with glossy black pebble-grained leather. The are fitted with iron mounts, overlaid with silver. Some of the mounts were then engraved, others left plain. The ring on the bowcase even has wire overlay decoration on the bottom.

Bowcase and quiver have a wide band of leather at their top and right sides, now beige but with remains of a once green finishing. On both appear three wide embroidered bands in red, yellow, and indigo blue silk. This is repeated under the ring on the bowcase. More embroidery in yellow appears at the bottom of the bow case. Such embroidered bands, in three colors, also appear on Qing regulation bow cases, primarily those of the 18th century.1

I was so lucky to acquire this set. Within the same week, one friend tipped me off on the quiver being auctioned in Japan. Another friend tipped me that he knew a dealer, also based in Japan, that had two identical Korean bowcases for sale. I had no doubt that the pieces were all made in the same workshop so I made sure I acquired both one of the bowcases and the quiver. Upon receiving them it was clear they are indeed an exact match.

While made in the same workshop, they appear to have been stored apart for a while and the quiver is in slightly better condition than the bow case. There is more blistering under the silver on the bow case mounts, and some old insect damage in the form of tiny holes in the leather. Some are filled with wax to make them less apparent. See photos.

Various sets of Korean bowcase and quiver are kept in museum collections. Among others:

Leiden Ethnographic Museum accession number RV-666-122a. This set is made of black lacquered leather, giving it a smooth glossy finish. The embroidery on the borders is close to our set. Acquired in 1888.

The Pitt Rivers Museum in Oxford has two sets, both with lacquered leather finish, this time one in red, one in black. Accession numbers 1959.3.2.1-4 and 1959.3.3.1-32. Again the embroidery on the borders echoes the current set. These two sets were acquired in 1896 by professor and diplomat Sir Walter Caine Hillier and subsequently owned by Cuthbert Edgar Peek before being incorporated into the museum collection.

There are also two sets of bowcase and quiver in the Metropolitan Museum, New York. Both are from the George Cameron Stone collection, bequethed to the museum in 1935. Unfortunately, only one bowcase is illustrated in the online database, accession number: 36.25.2576a-b. The other set can be found under accession number 36.25.2575a-b. They are illustrated in Stone's Glossary.2

Notes
1. Huangchao Liqi Tushi (皇朝禮器圖式) or "Illustrated Regulations on the Ceremonial Paraphernalia of the Dynasty". Woodblock edition of 1766. Chapter 14.
2. See: Stone, George C.; A Glossary of the Construction, Decoration and Use of Arms and Armor: in All Countries and in All Times. (Reprint) Jack Brussel, New York, 1961. Page 136. 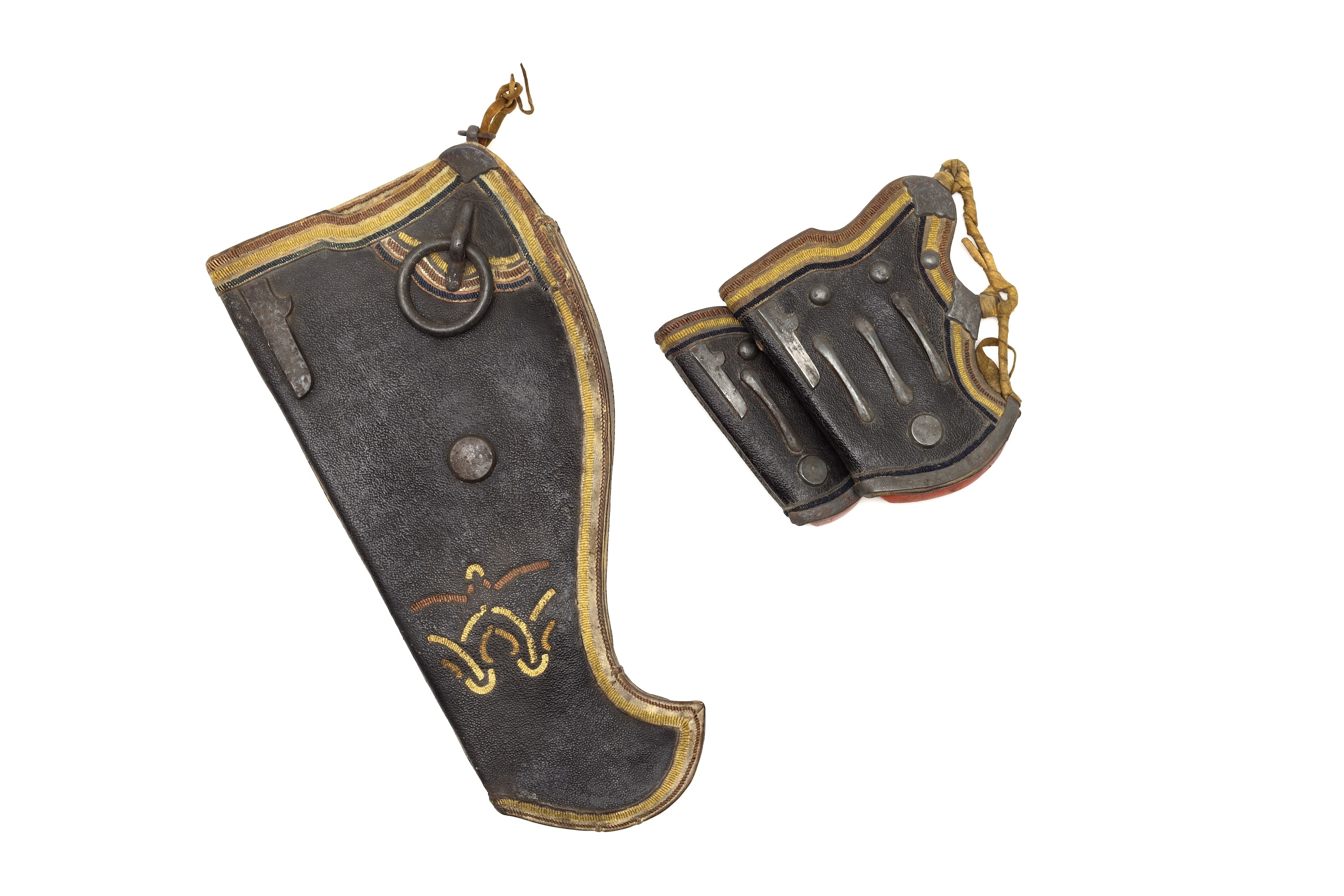 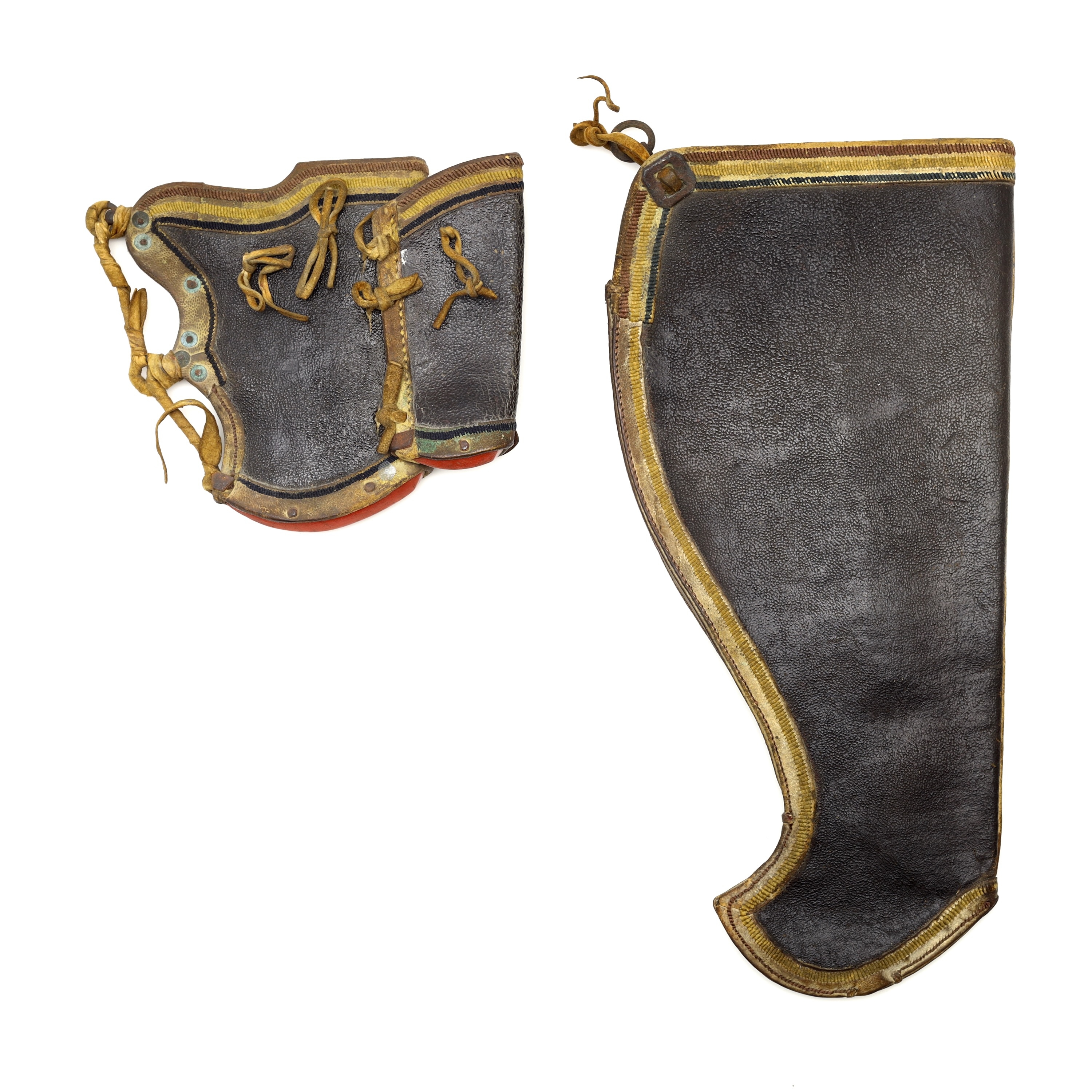 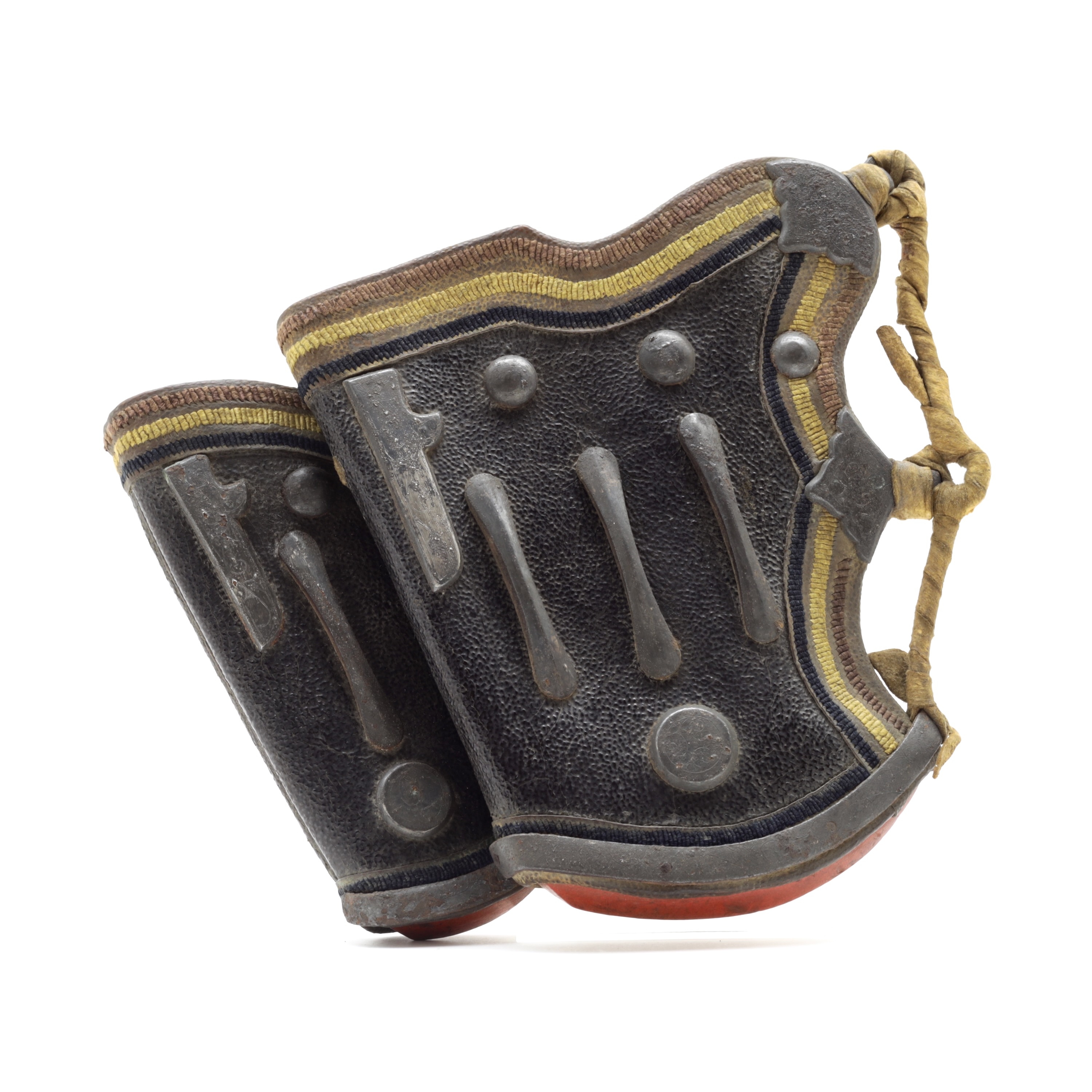 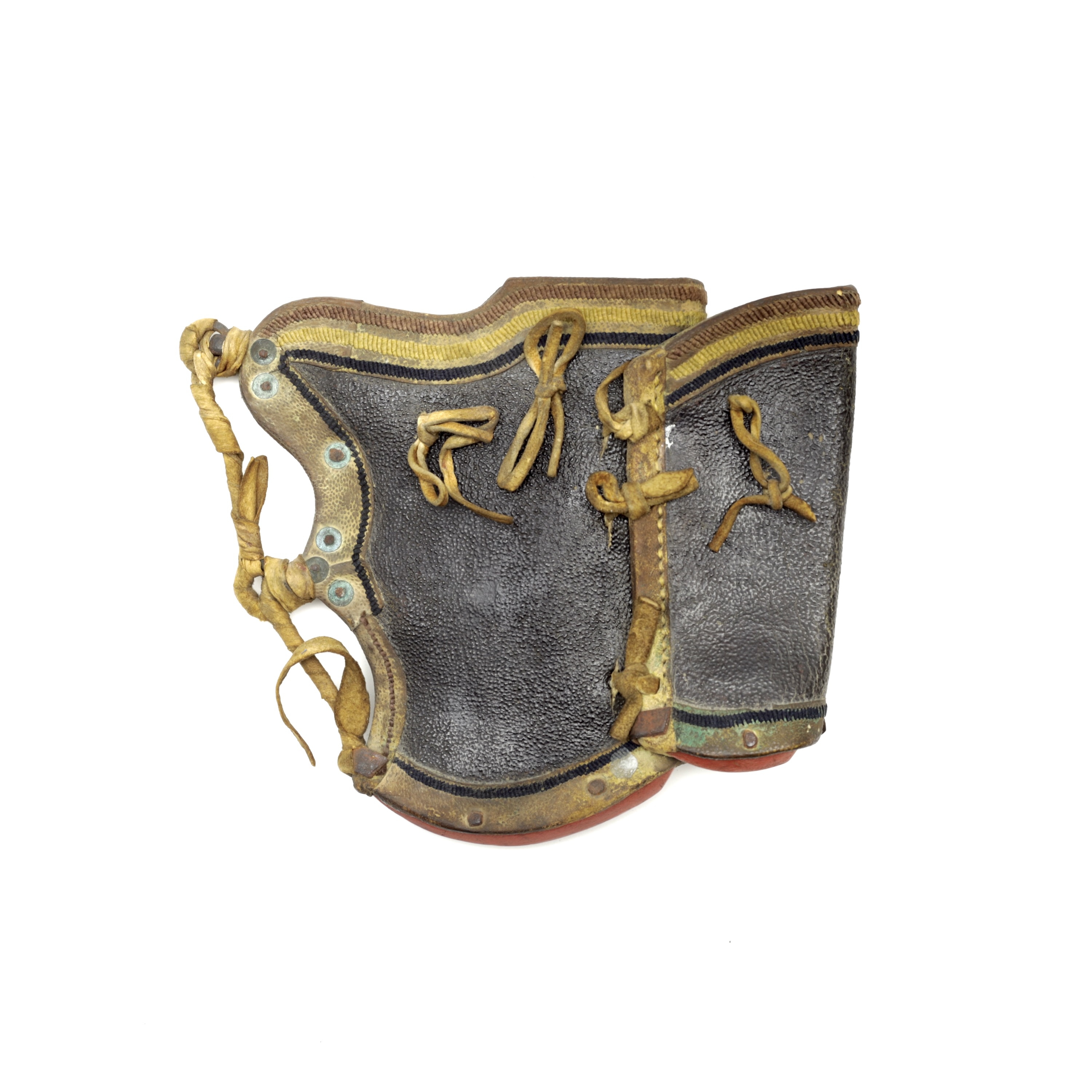 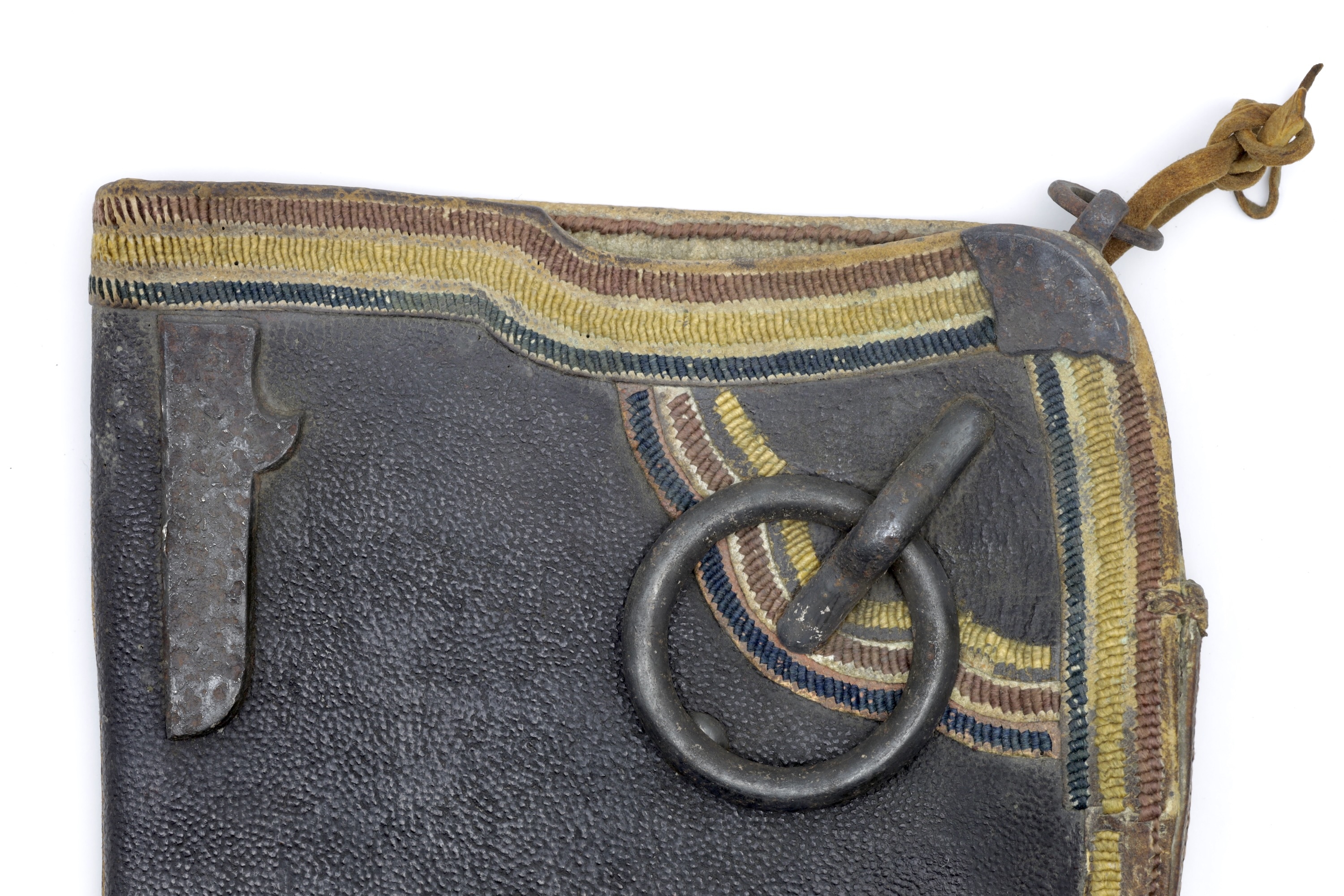 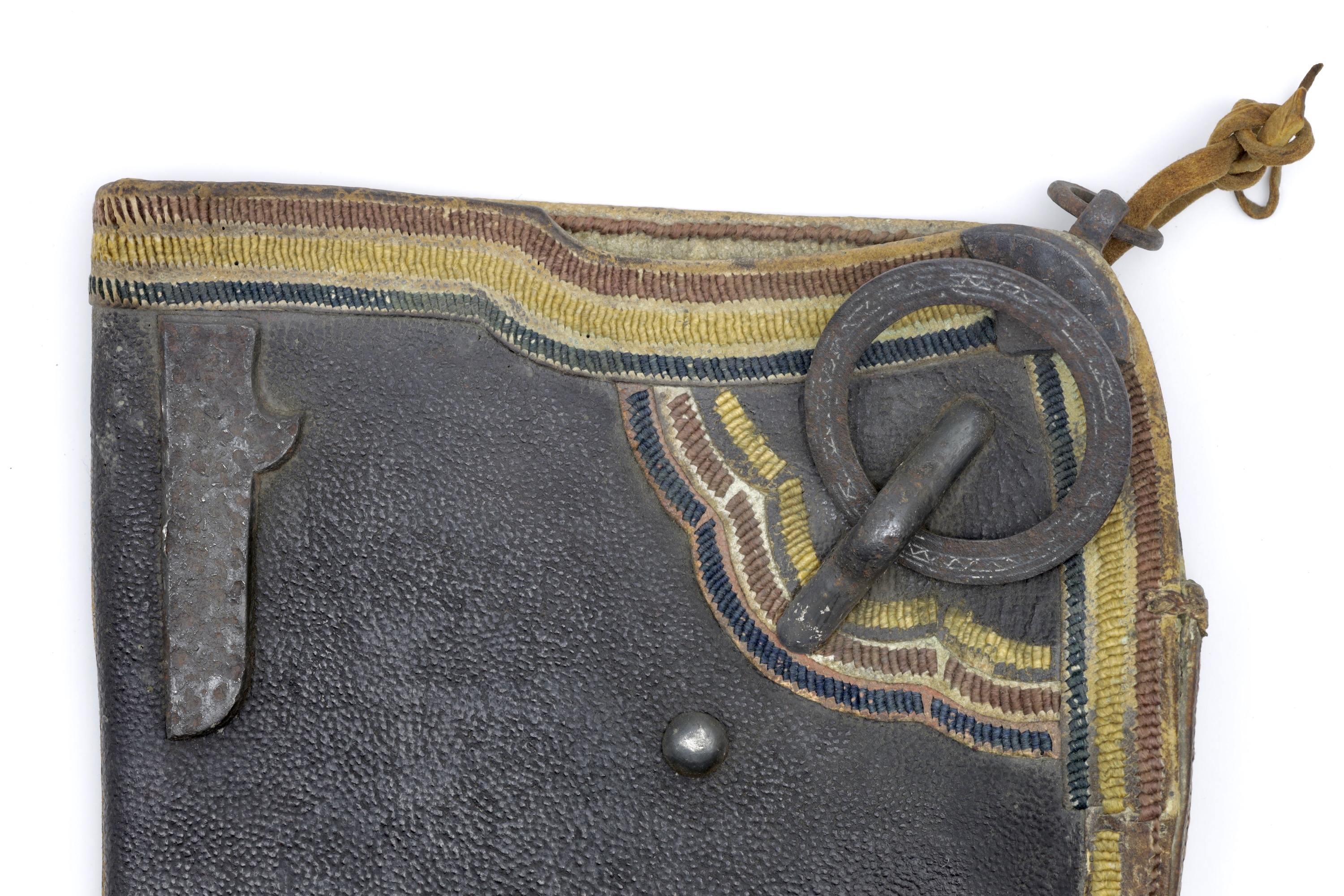 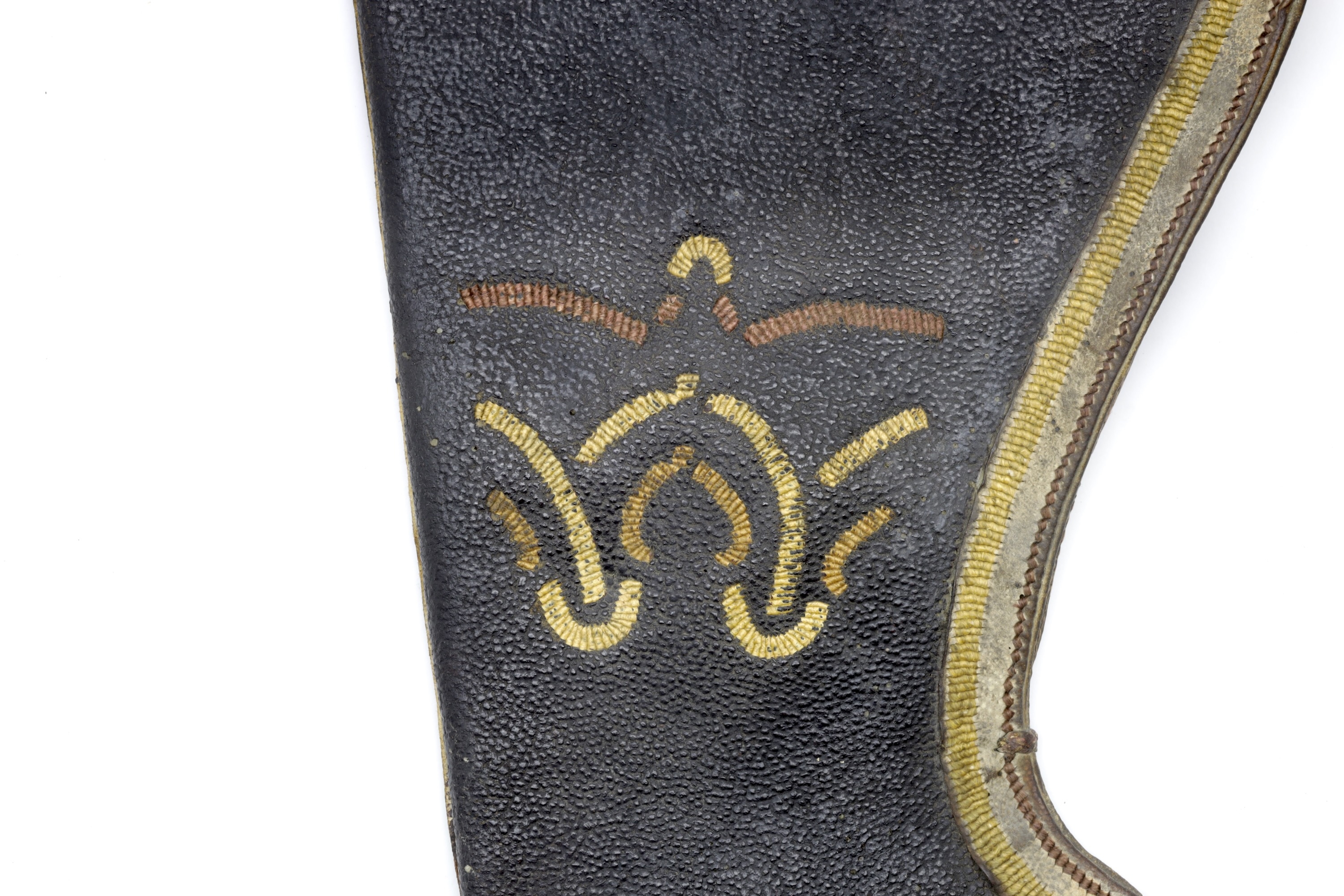 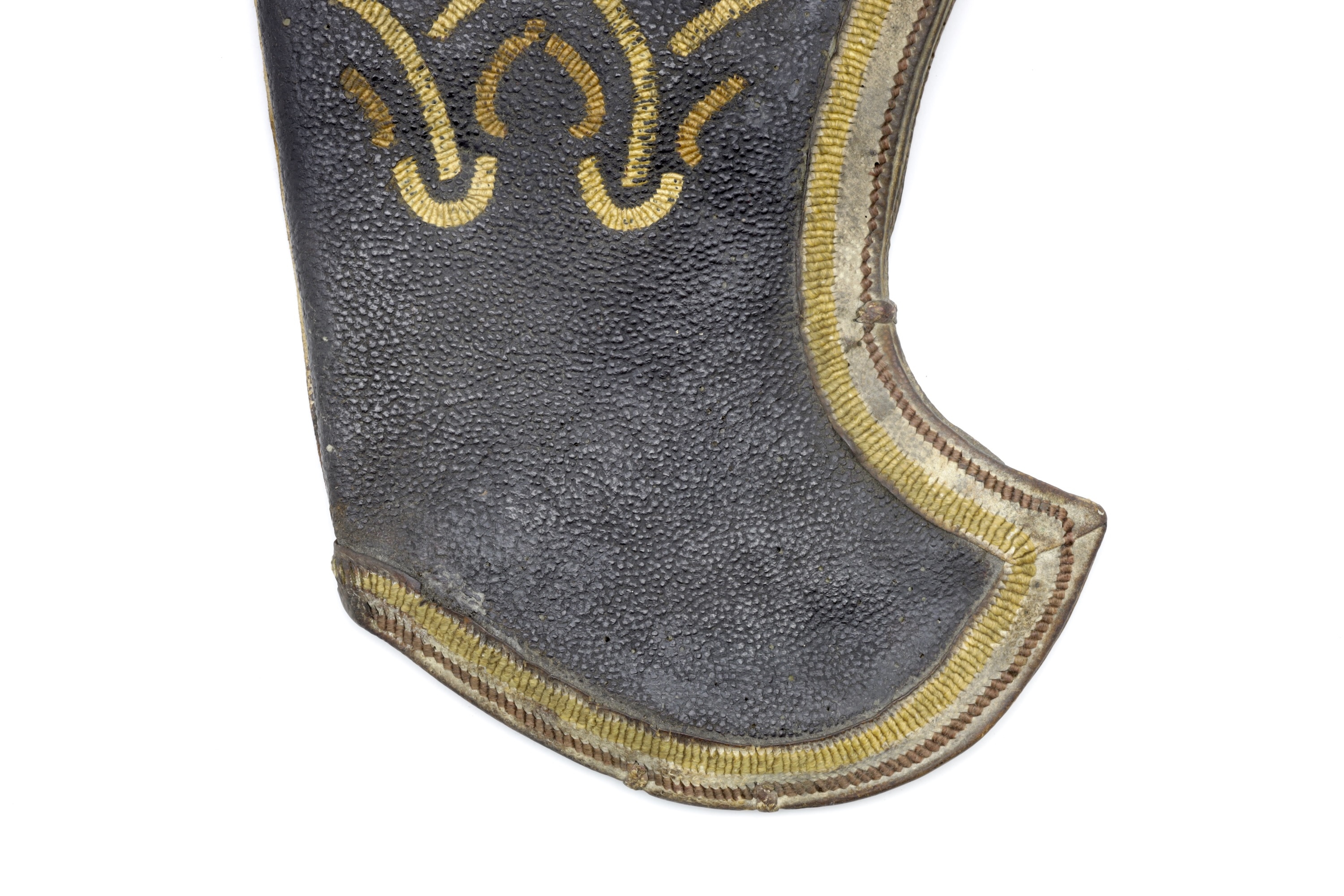 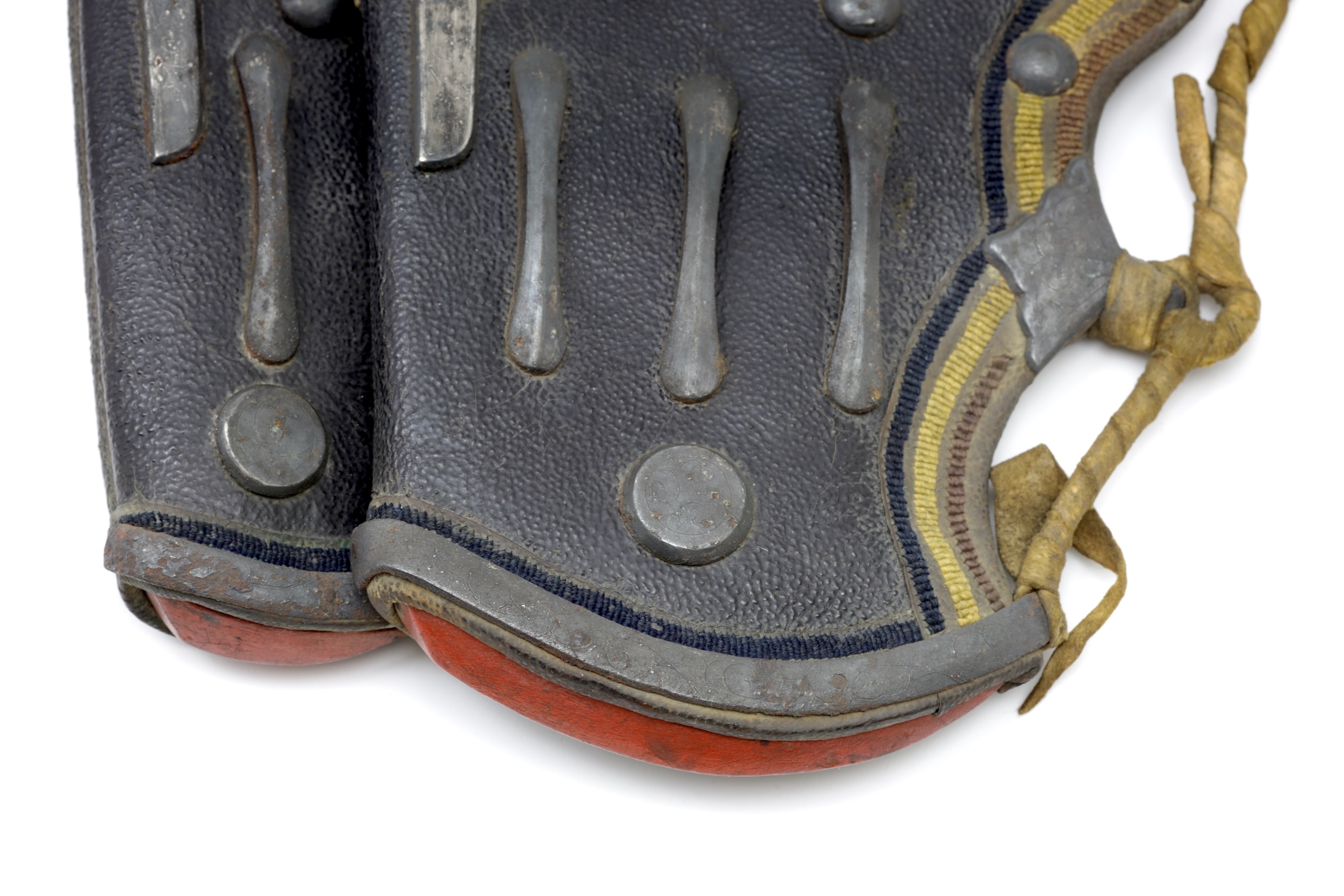 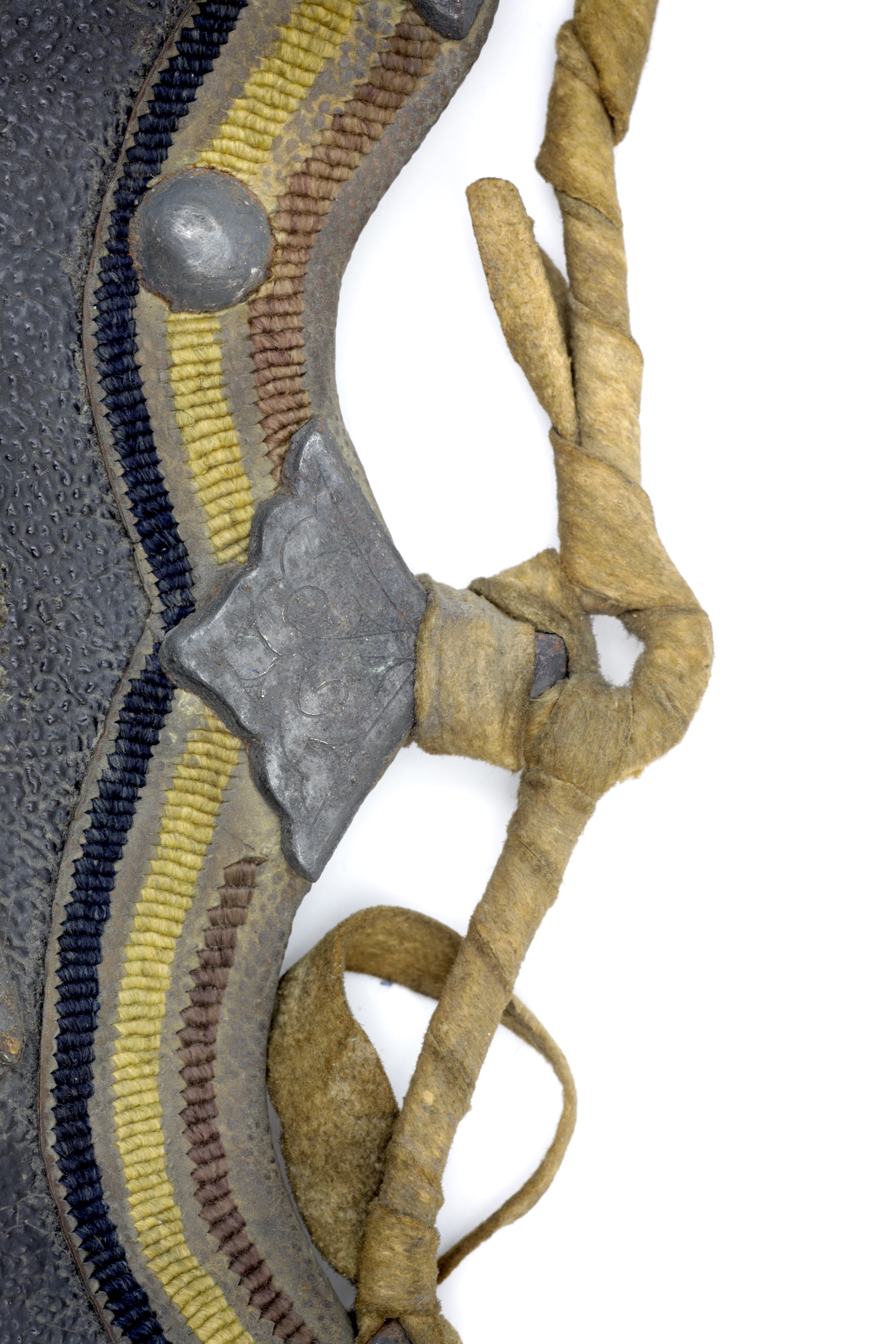 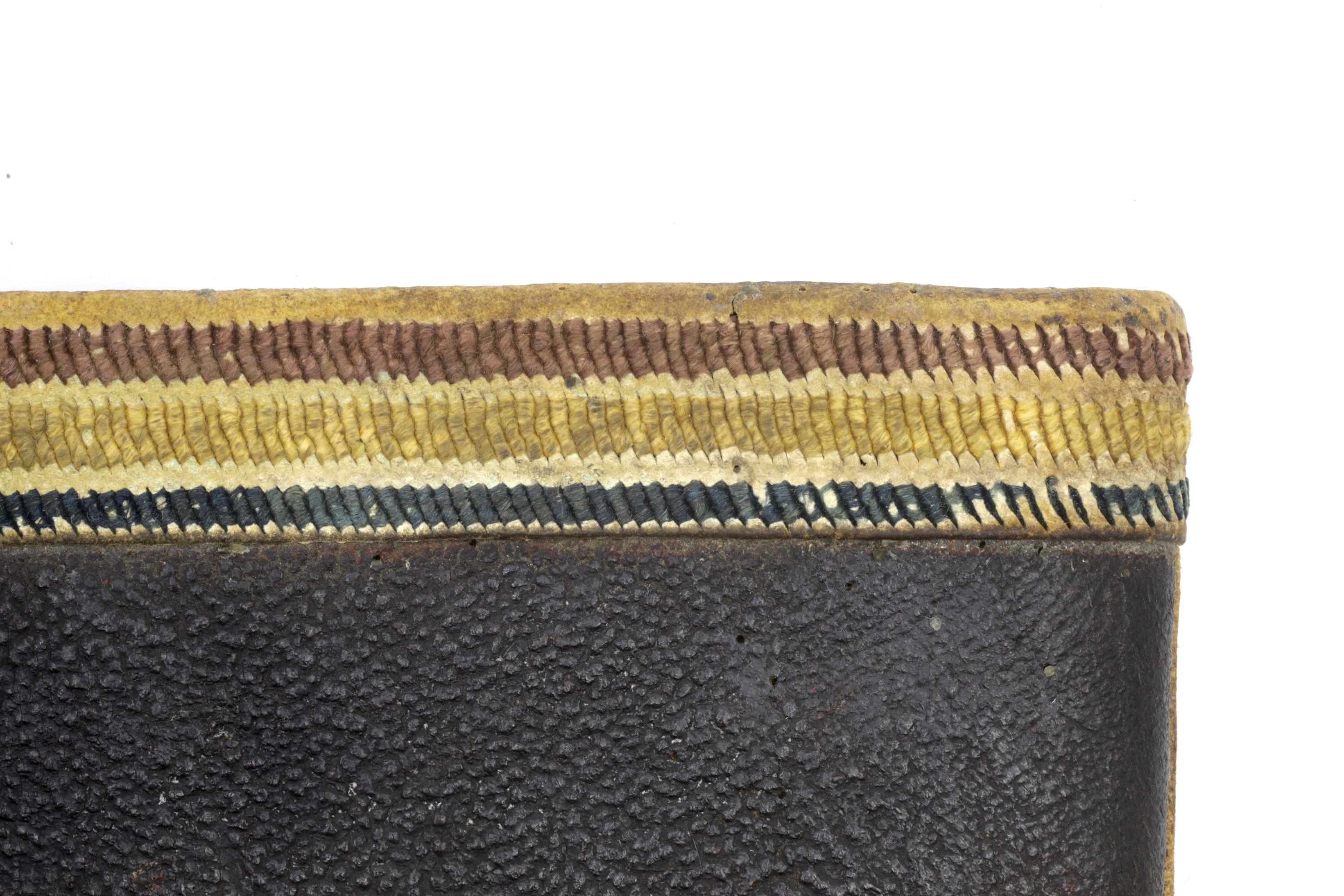 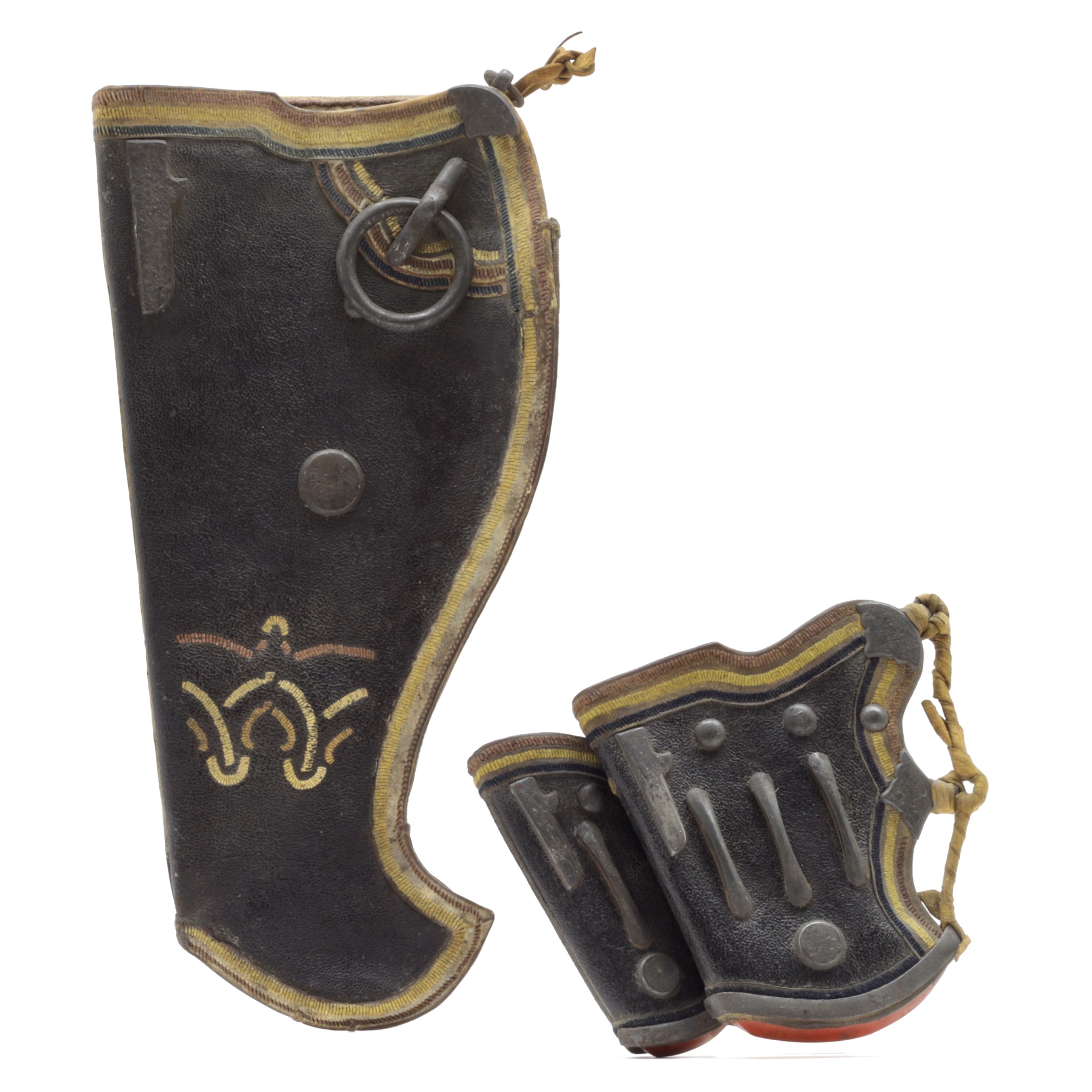