Narrowest at base 28 mm

The knife itself has a beautiful blade, with gentle hollow ground blade with secondary edge bevel. It is very finely forged, with no visible flaws in its laminations and ground with considerable precision.

The edge is still very sharp. Two narrow grooves run along the spine up to the "shoulder" of the blade. The notch, called kauro, has a subtle three-pronged protrusion. Blade in very good condition, with only very minor edge damage and staining.

The hilt consists of a brass bolster and a carved black buffalo horn grip, both highly polished. Some chips off the pommel, as is often the case with these.

The scabbard is made of wood, covered with red silk fabric and encased in a silver outer frame with silver mounts decorated in repousse. Two additional openings at the top accomodate the karda and cakmak, both still present.

At the top, the scabbard carries a heraldic shield with three lions on top of a creeping plant with flowers, and under palm leaves. It strongly resembles the state emblem of the Dominion of India of 15 August 1947 and later the state emblem of India, adopted 26 January 1950. Both are based on the Lion Capital of Ashoka of circa 250 B.C. 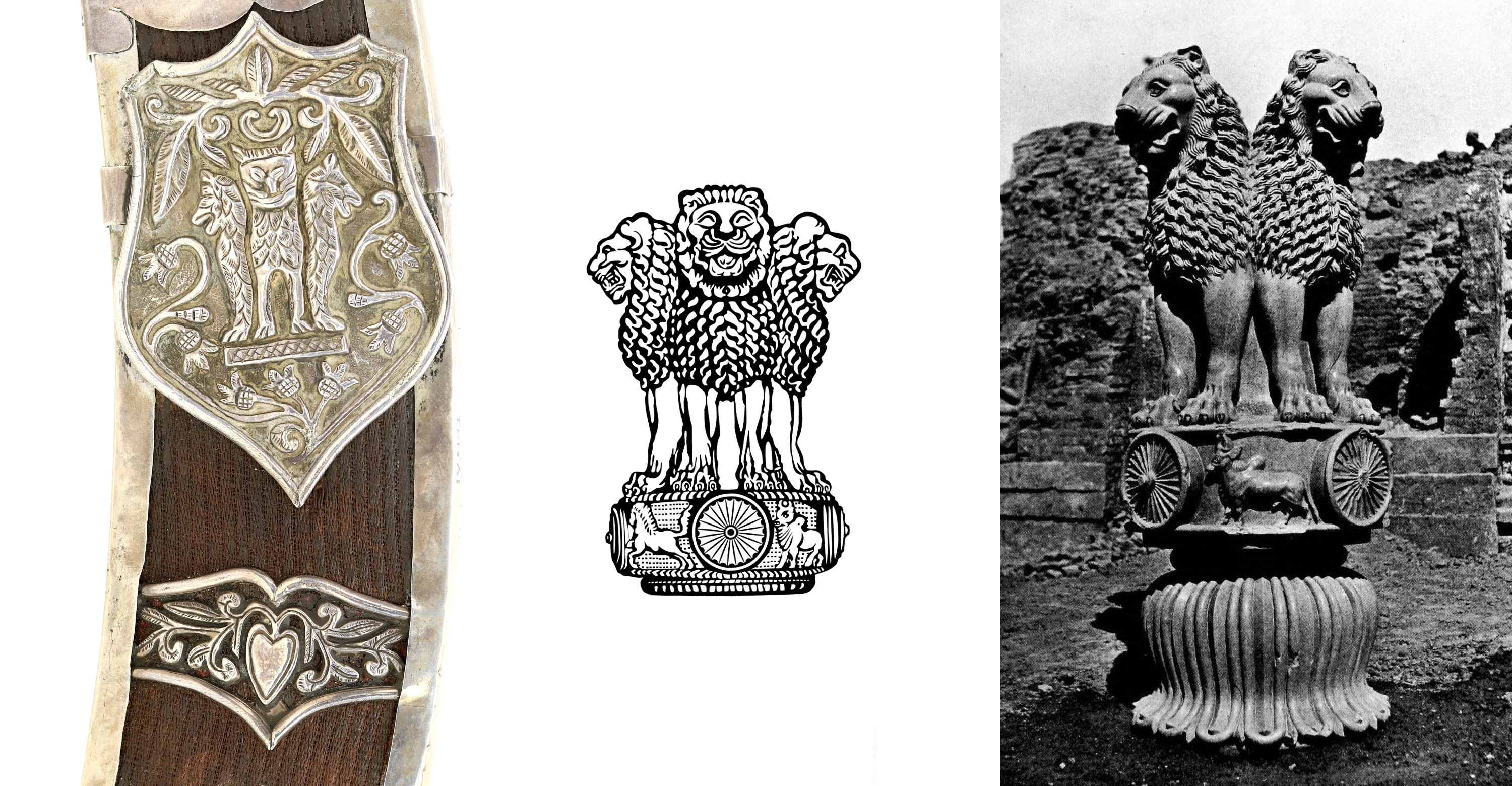 Left: The scabbard of this khukurī.
Middle: State emblem of the Dominion of India and later of India.
Rght: The Lion Capital of Ashoka, photographed circa 1905.

A notable difference between the emblem and the actual pillar and our khukurī scabbard is the base. Still, I assume this is probably meant to resemble the state emblem of India. Furthermore, because there is a marking on the scabbard:

View of the top edge of the scabbard.

FROM MEMBERS OF THE STAFF

Panighatta is a village in the Darjeeling district in West Bengal. It is located on the banks of Balason River and the foothills of the Himalayan Mountains. It is known for it's Tea Estate named Terai, which is without a doubt what "T.E. TERAI" stands for.

P.L. Achard was a bit harder to track down, but I don't easily give up. The Journal of the Bombay Natural History Society of 1961 quotes a P.L. Achard as the author of: Golden Langurs Presby geei Gee (Khajuria, 1956) in captivity. 1 And what have you, it mentions his presence at the Terai tea Estate.

For the reader's delight, I add a passage written by our P.L. Achard, whose khukurī is currently laying next to me on my table:

"During early December 1955, a friend and I visited the Sankosh River on a fishing holiday. On arrival at the Jamduar Forest Bungalow, we found a scientific party there, who were collecting specimens of the Golden Langur, Presbytis geei Gee (Khajuria, 1956), for the Calcutta Museum. We helped the collectors obtain some specimens during the course of which I acquired two baby Golden Langurs, male and female, for myself. These I estimated to be 2-3 months old at the time of capture.

They did not show any signs of being afraid of humans, and took quite readily to a bottle of diluted condensed milk, and also ate oranges and bananas. I took these young langurs back to the garden in the Terai (Darjeeling District)."

P.L. Archard is the author of a number of articles:

An article mentions a Peter Archard who from 1966 was a game warden at Lake Victoria. This must be our guy. I quote:

"Peter Achard was instrumental in establishing Rubondo Island in Lake Victoria as an 'ark' for endangered species...long before such ideas (of relocating endangered species) had taken root elsewhere. From 1966 he arranged the transportation of rhino, elephant, giraffe and chimpanzees to the island - most of which have thrived and survived to the day (with the exception of the rhino)." 2

Another mention in The Touch of Durrell by Jeremy Mallinson:

"Over dinner, Peter Achard told me how he had recently trapped an adult leopard on the shores of Lake Victoria, where it has been a nuisance, killing a number of domestic dogs that had been with their human masters as they picknicked at the lakeside. Because the baboon population had increased considerably in the nearby Serengeti National Park to the north-east of Mwanza, Peter had decided to put the trapped leopard on the back of his pick-up vehicle and released it in the National Park to reduce the number of baboons. However, when released, the leopard instead of it fleeing from the rear of the trick, rushed round to the front of the vehicle and sprang on to the bonnet trying to attack the man who had made it suffer such an indignity." 3

"Peter Achard was an energetic and enthusiastic man, and enthusiasm can be infectious even to aging men like me, who really ought to steer clear of adventuring." 4

The silver presentation khukurī of a notable game warden and conservationalist Peter Achard. Given the time of the incorporation of the emblem, his writing about the Terai Tea Estate in 1961, and his work at Lake Victoria in 1966, the khukurī must have been made between 1947 at the very earliest and 1966 at the very latest. Most likely around 1961, when we are sure he was at the Terai estate. 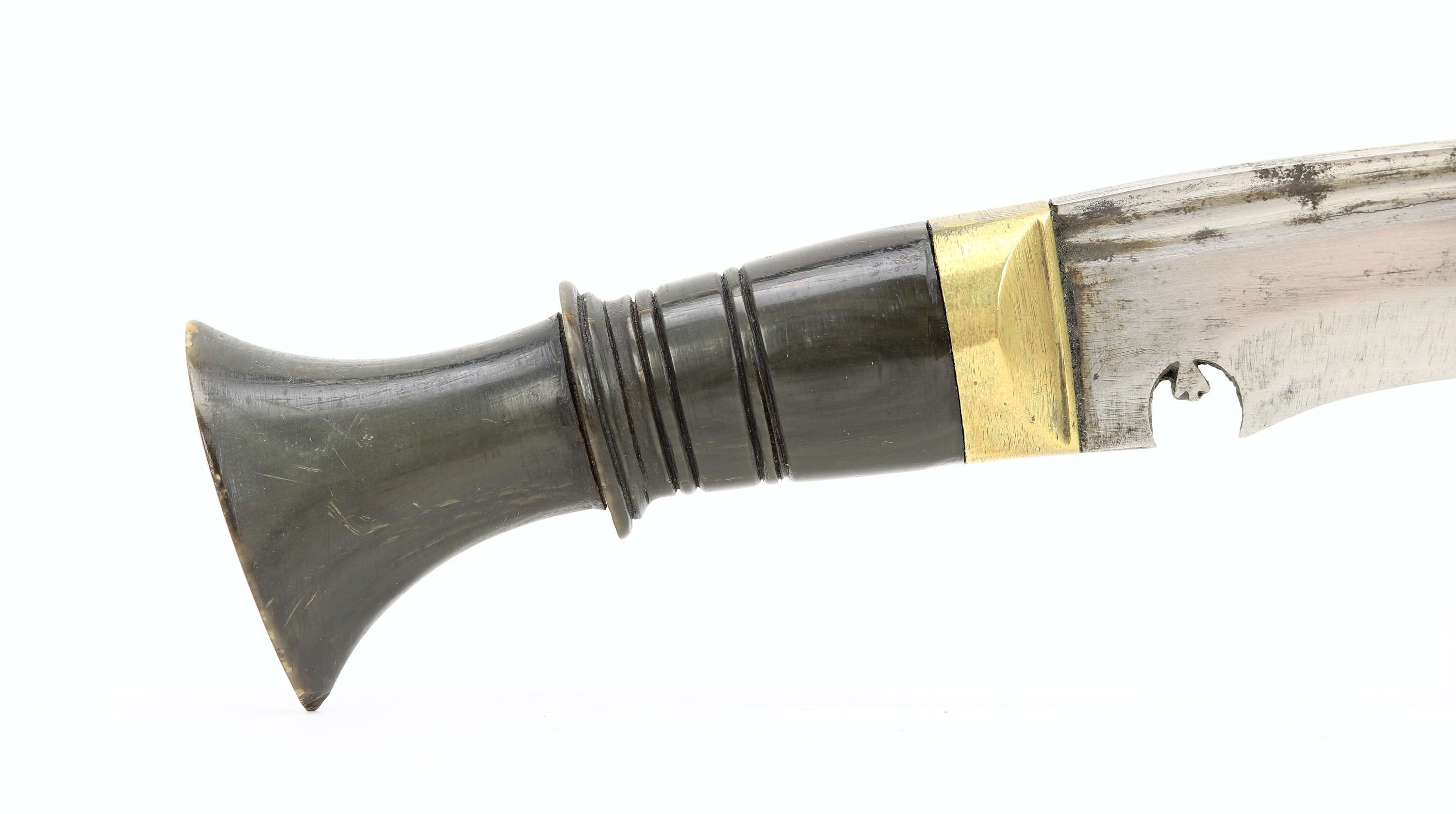