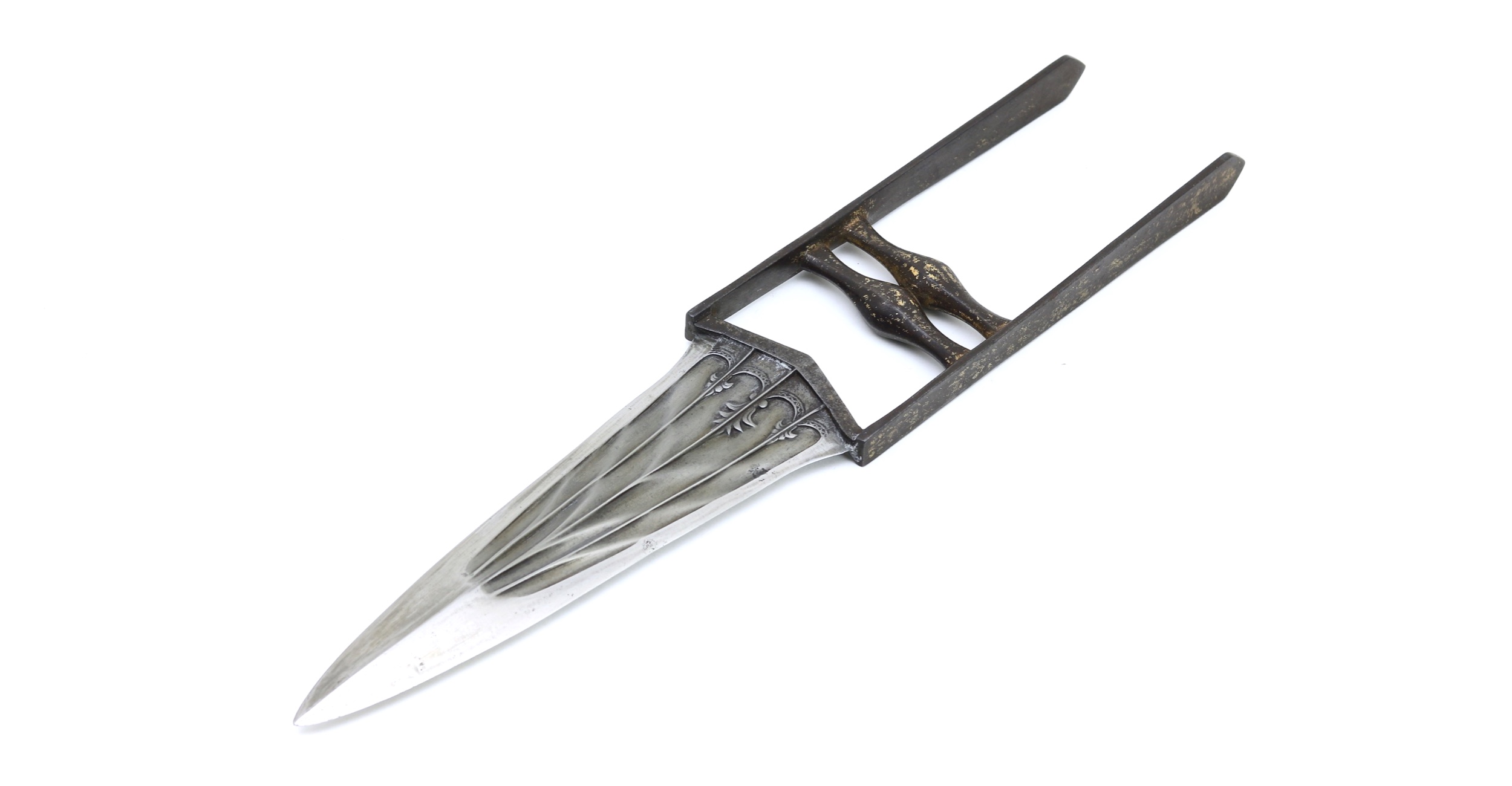 A heavy and robust katar. The strong blade is made of a boldly contrasting wootz steel. Its has a wide profile and thickens considerably near the tip. Three pronounced ribs divide a sunken panel at the center of the katar's blade into four sections. Shallower raised areas split from the main ribs in a pattern of chevrons.

The base of the blade is chiseled with a scalloped design that is reminiscent of archways in early Hindu architecture, with Mughal style palmette sprays emerging from the apexes between each concave section.

The hilt-blade junction is a shallow V-shape, a staple of north-Indian katar design since at least the 16th century. The sidebars are thick for this type of katar and gradually taper in width before ending on a triangular tip.

The handlebars have a pronounced bulge and are facetted in cross-section, with 10 facets to each. They are subtly connected by a small but very deliberately placed piece of iron.

The hilt has remains of cross-hatching with some gold in it. It suggests that the entire hilt was at some point covered with gold. It does not follow the normal pattern you would expect from wear, even in the hard to get spots the gold is mostly gone. This shows a very deliberate stripping of the gold. Possible reasons could be to sell or re-use the gold, or because the item was changing into the hands of someone not entitled to wear a golden weapon. The deep dark patina on the hilt suggests this was done a long time ago.

Let's first look at the most striking element, the elaborately ribbed sunken panels on the blade. This feature was used a lot by the armorer Khēmau of Bundi, whose known works with blades in this style date from around 1850-1853.1

-A piece exhibited at the Jeypore Exhibition of 1883, no date given.3

But although done by Khēmau for a period of time, the design does not seem to be originated by him. There was a piece in the Ulwar armory, described in 1888 as being Made in Sirohi of Ispahan steel. Bought in 1836. The full description with plate:

Detail of plate XXXIII in Hendley, 1888.

"Dagger. Katár. The double cross-bars and side-guards are enriched with well-raised arabesque patterns in gold. There are three ribs on the blade united by cross-ribs. Sheath of embossed leather. Length, 18 inches.

Notice how on this katar, the panel runs all the way up to the hilt. This is not the case on any of the known Khēmau / Bundi pieces.

From the above we can conclude that this design feature was popular among Rajput elite circles in Ulwar and Bundi and was produced in Sirohi from expensive imported steel from Persia.

On to the hilt

When we look at the base of the hilt where it meets the blade we see that the there is a slightly sharper angle in its form compared to the preceding examples. The handlebars have thicker middle bulges, and more facets than the typical work of this kind. Lastly, most katar of this type have rather narrow sidebars in profile, with rounded or sudden ends. While this example has them widening gradually and then terminating in a triangular end.

A combination of these three features in hilt design can also be seen on an interesting curved katar of the Ulwar armory:

"An old dagger, Katár, said to have been made about 1590, in the reign of Mahárájá Bhoj, of Búndi.
Blade flat and curved, watered with a strong central and two lateral ribs; plain double handle bars." 5

Our katar here combines the earlier hilt seen on the above example with a complex blade style that was popular to at least the 1850's. I therefore believe that it probably represents a late form of the simple hilt, and an early form of the complex ribbed blade.

Together with the palmette details on the blade I would say the piece probably dates from the late 18th to early 19th century, and is a predecessor to the other known examples of this style.

A nice old katar of robust proportions, with a much heavier feel in the hand than most later examples. It has a fine wootz blade with a rather complex and nicely executed blade decor. It probably represents an early version, perhaps even a prototype, of a type of katar that would become strongly associated with Bundi through a number of such pieces being made for Bundi's ruler in the 1850's. 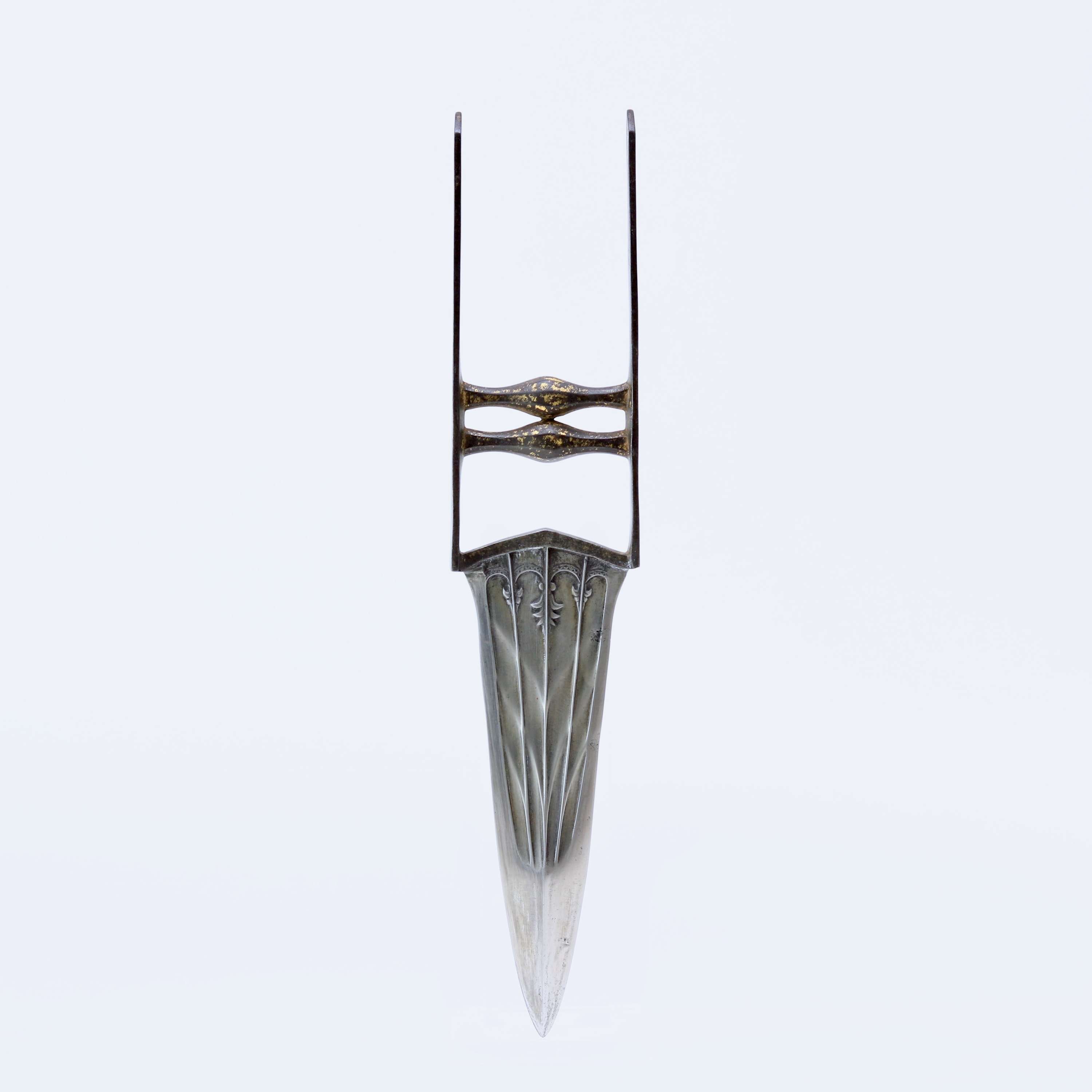 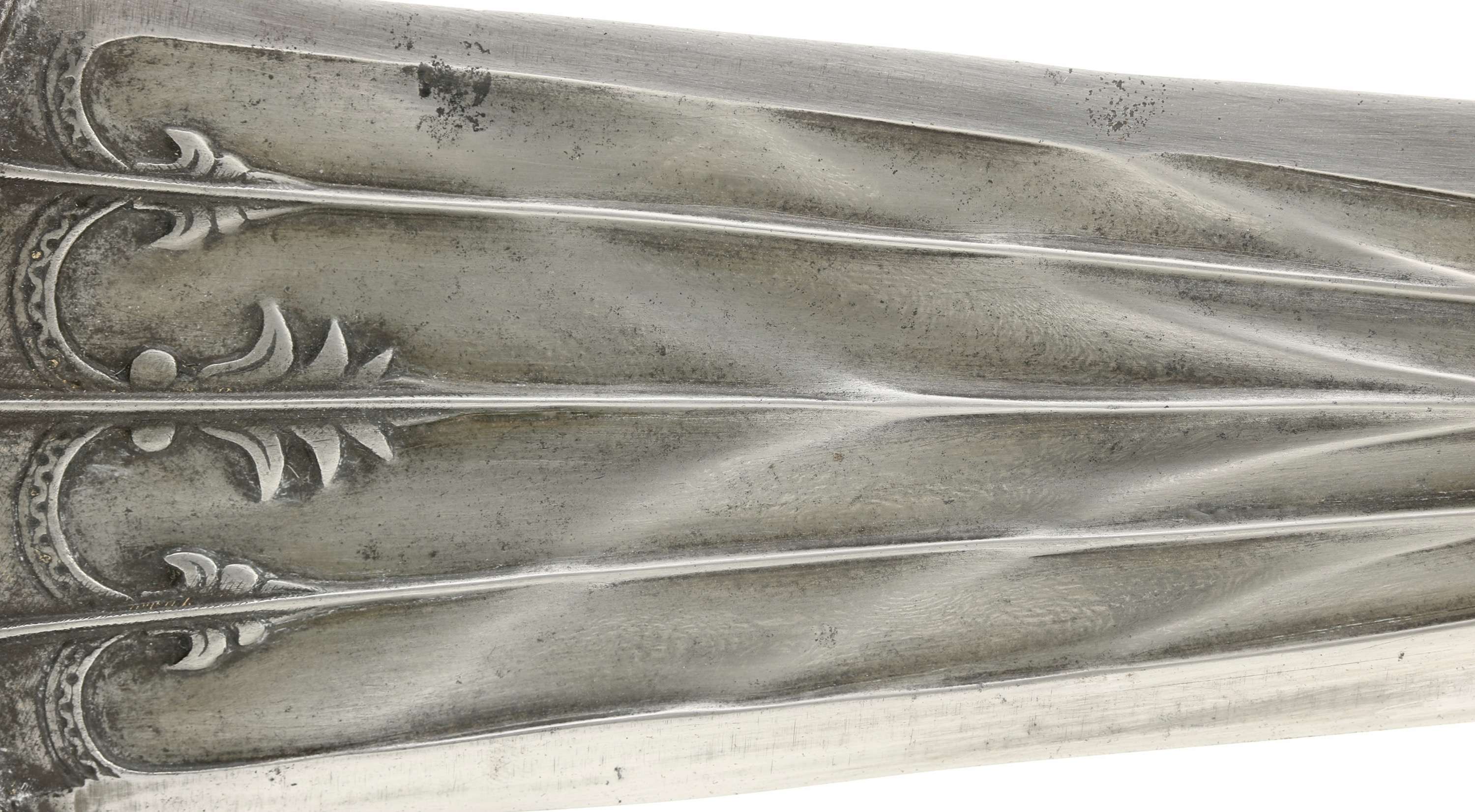 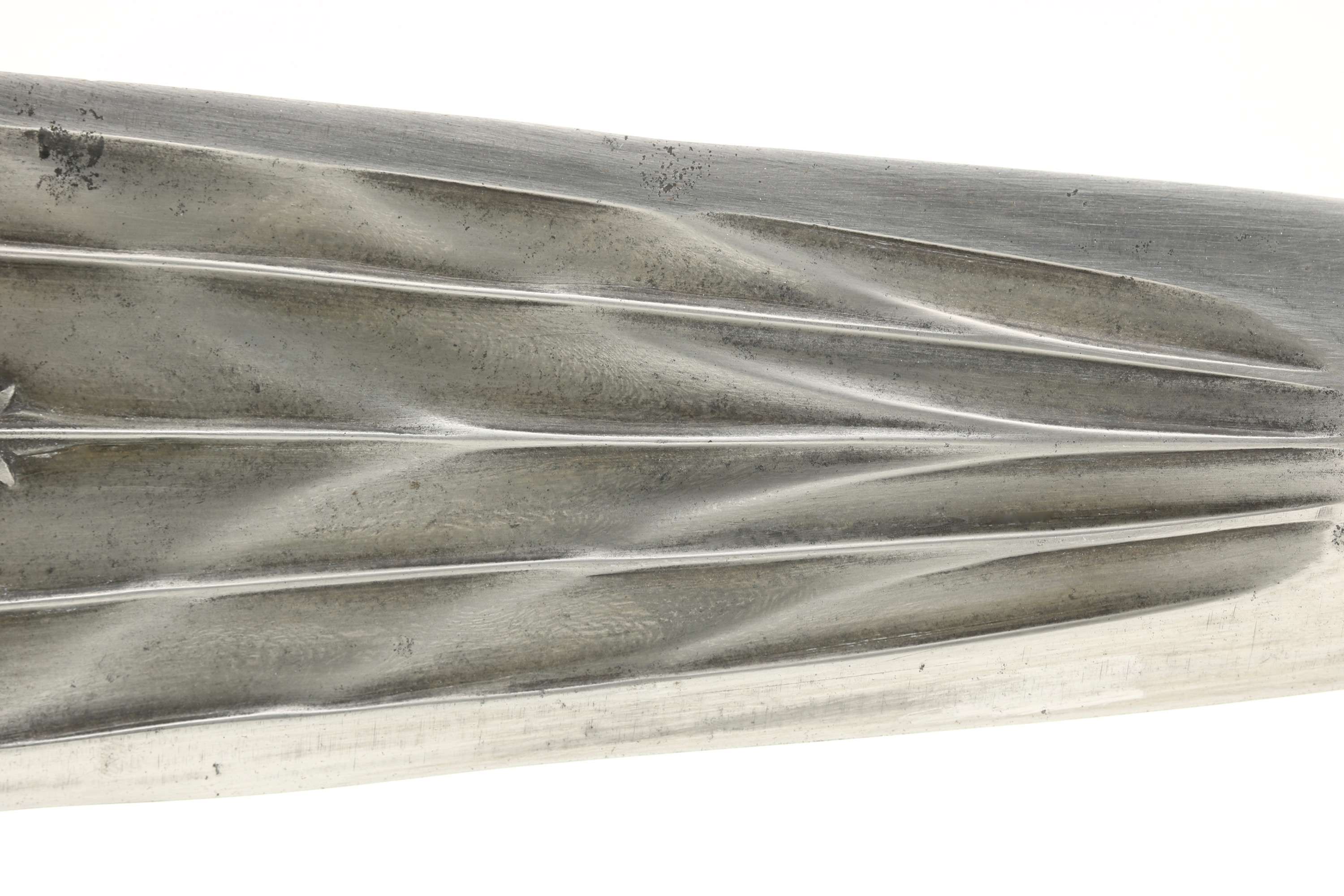 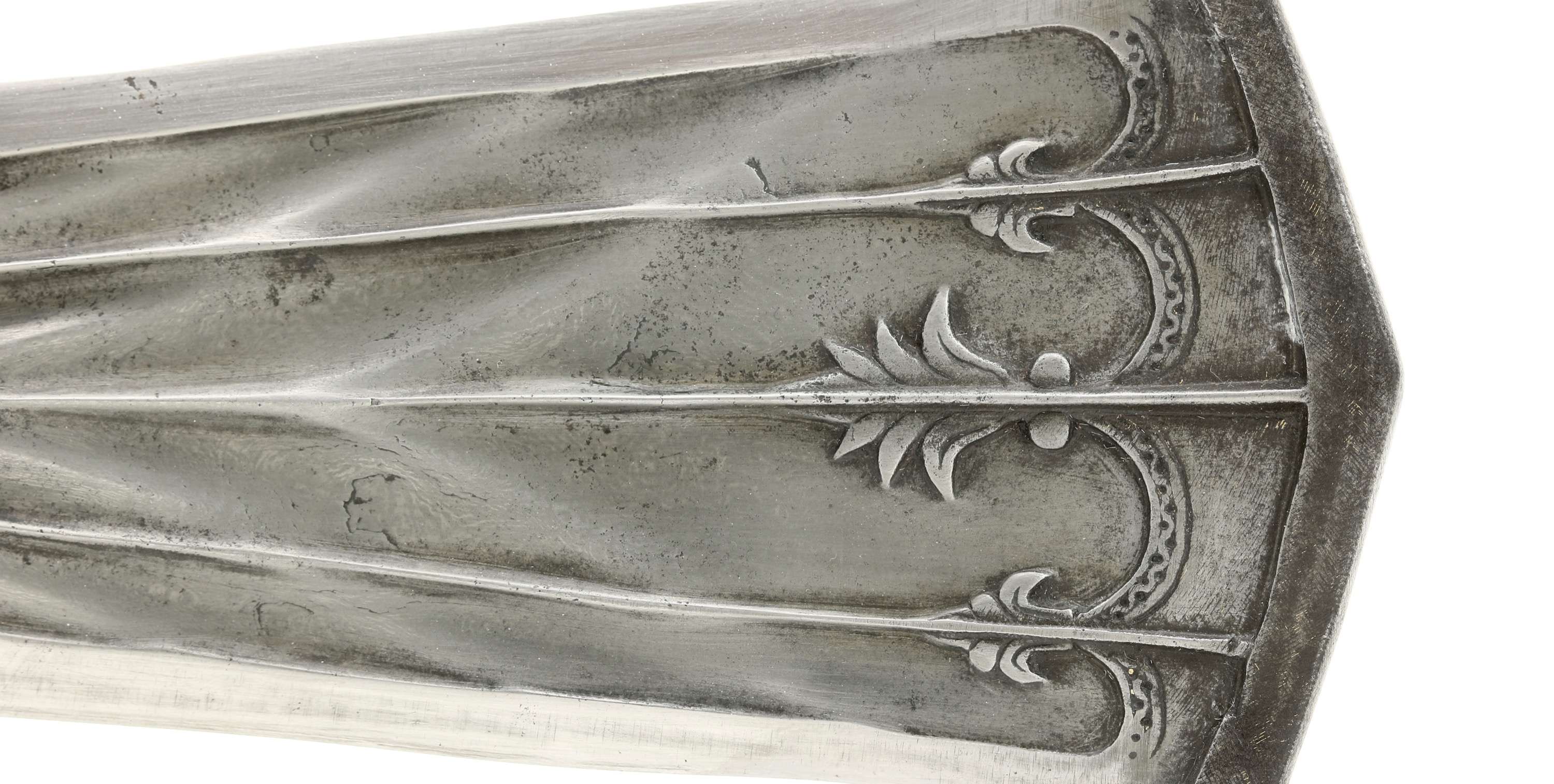 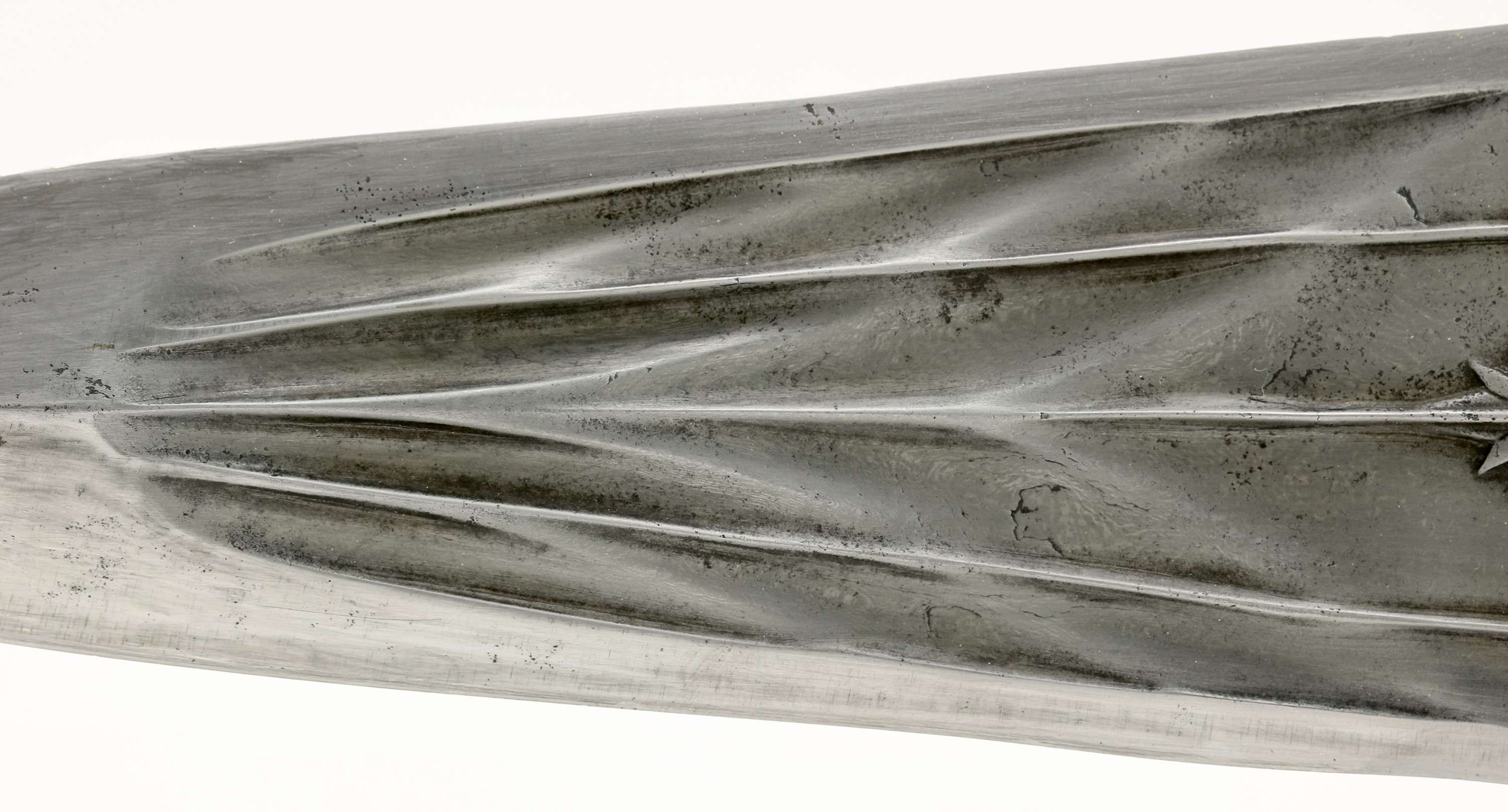 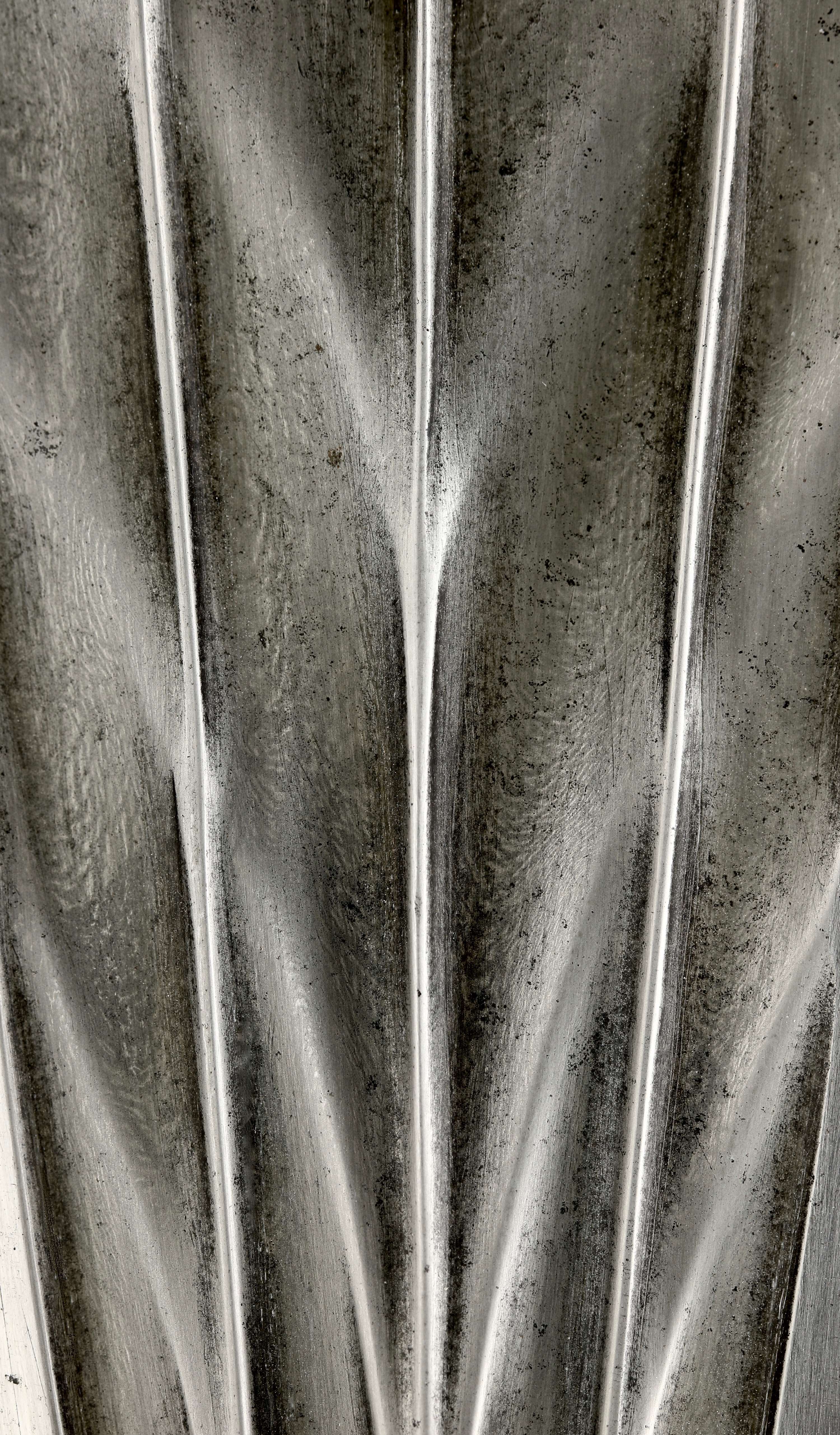 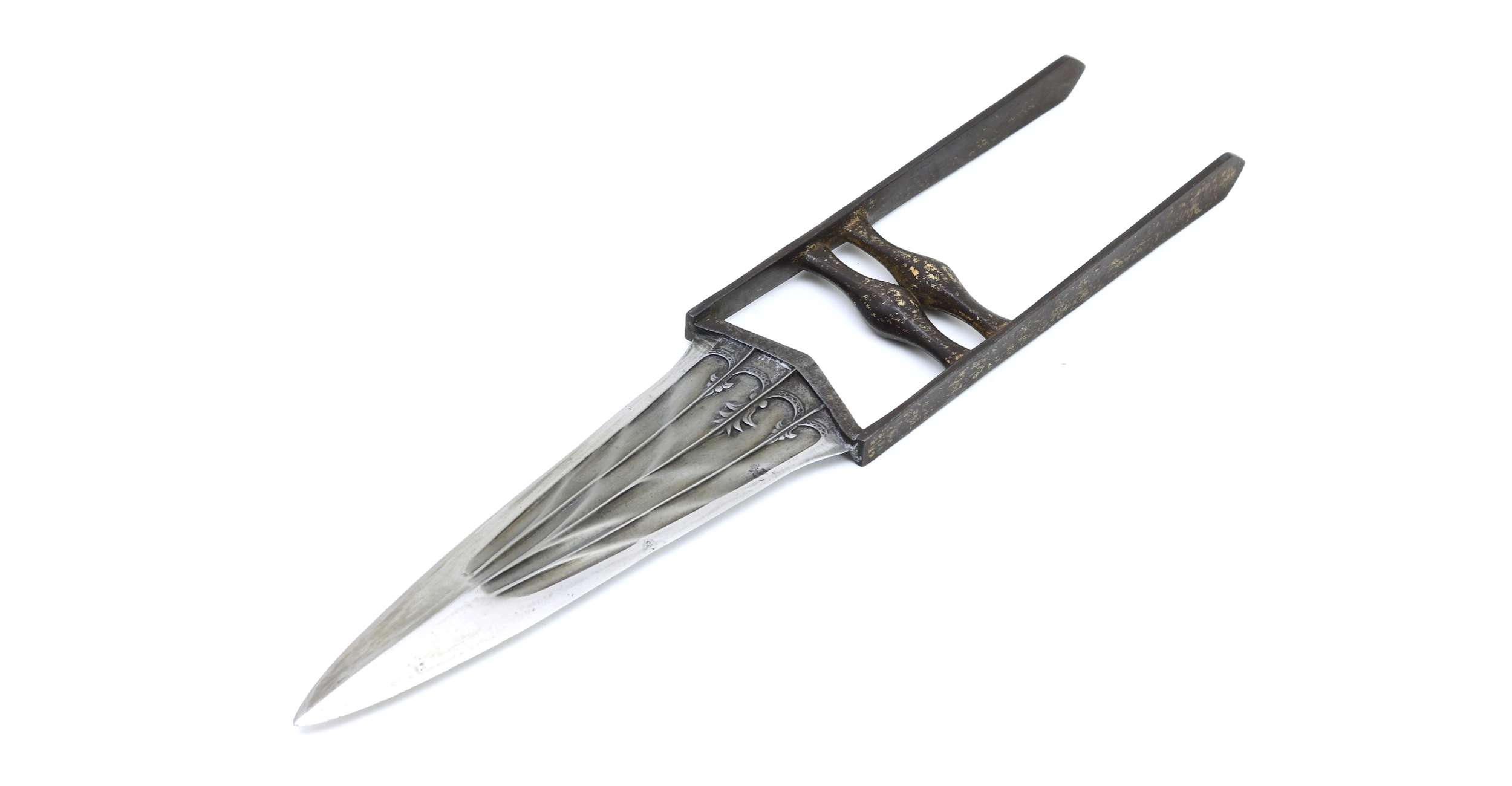