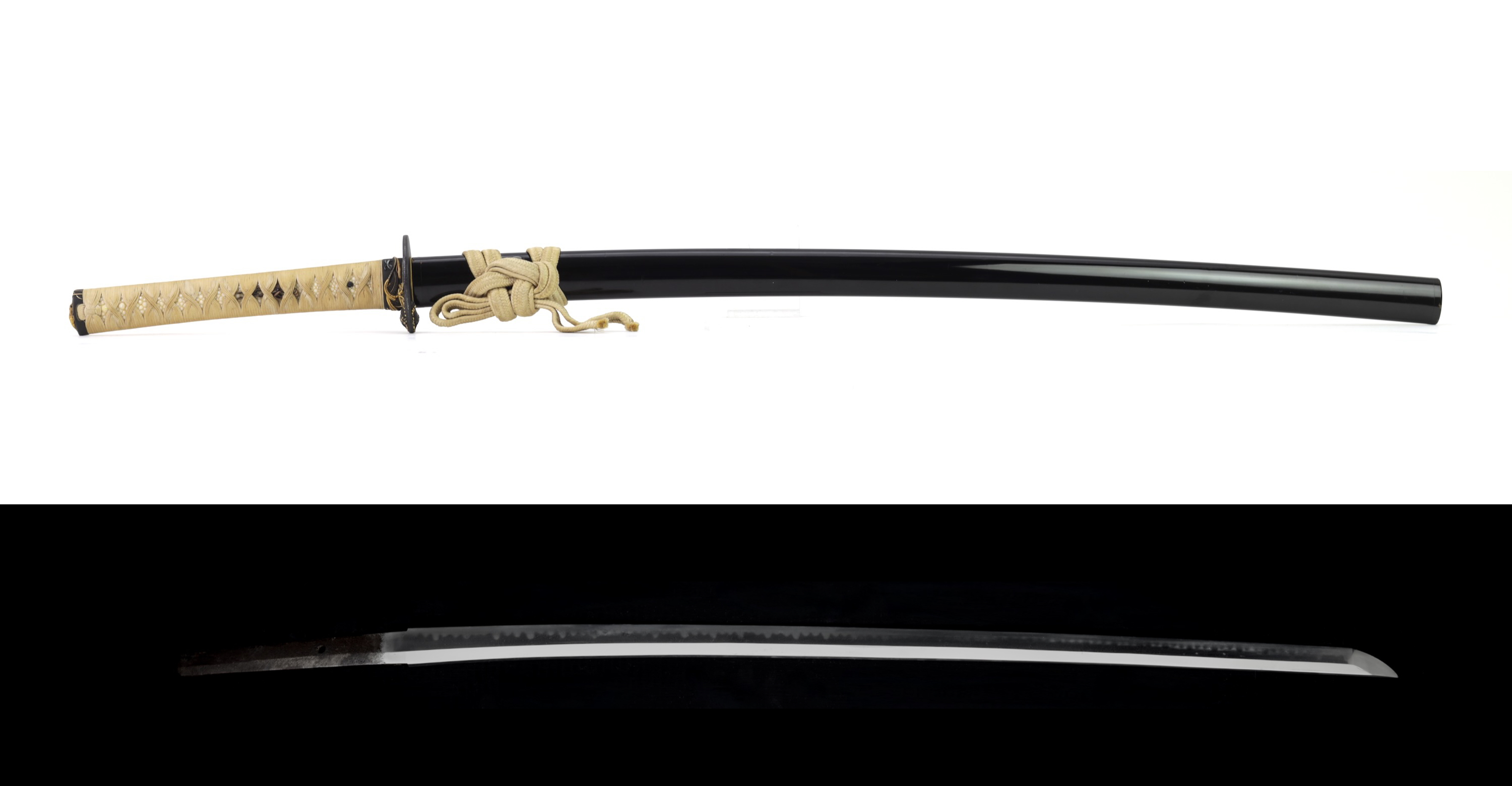 From a Japanese gentleman living in the U.S.A.

A long and heavy, straightish katana showing the typical traits of the Mino school.

Sword attributes
(With plain English below)

Jigane: Itame-hada with masame edge. Some mokume in the shinogi-ji.
(Steel: Regular wood grain with straight grain near edge. Burl patterns appear above the ridgeline.)

Hamon: Sanbonsugi based gunome midare in nioi deki, with some ko-nie. Sanbonsugi based gunome midare with some ko-nie. Some sunagashi.
(Temperline: "Three cedars" style with a repeating pattern of three upward protrusions, two small ones and one larger. Appearing in mostly small martensite crystals that form a mist with some larger particles visible to the naked eye. Some brushed sand effects.)

Boshi: hakikake on the left and kaeri on the right
(Temperline in tip: an effect like brush strokes on the left, a sharp turn towards the spine on the right. 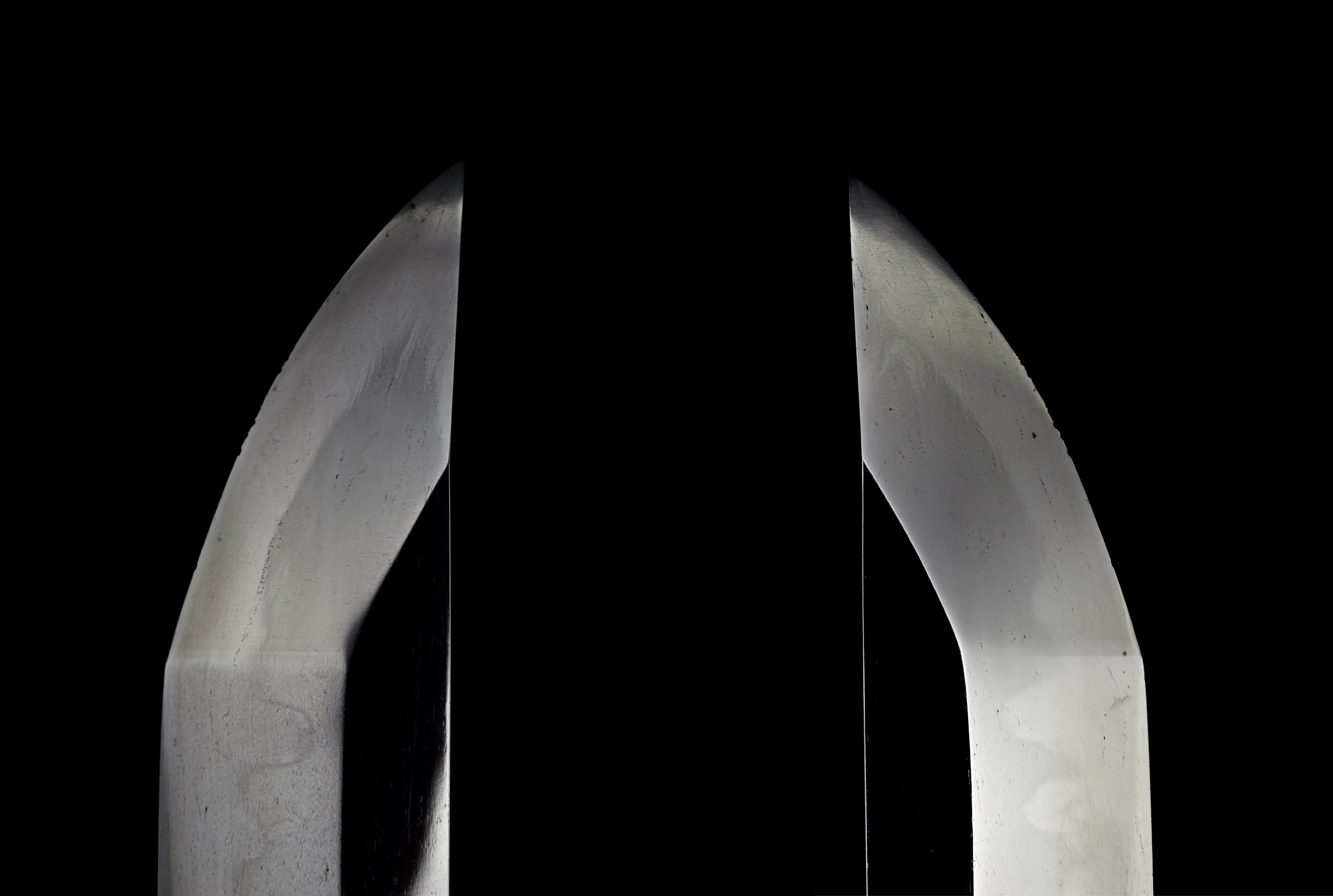 The blade has some interesting features. The strong masame hada that suddenly appears at the edge, and the formation of the martensite on it, is indicative of it being a separate, high-carbon piece of layered steel. This construction is probably indicative of sanmai-gitae (三枚鍛え) or "three-layer forging". 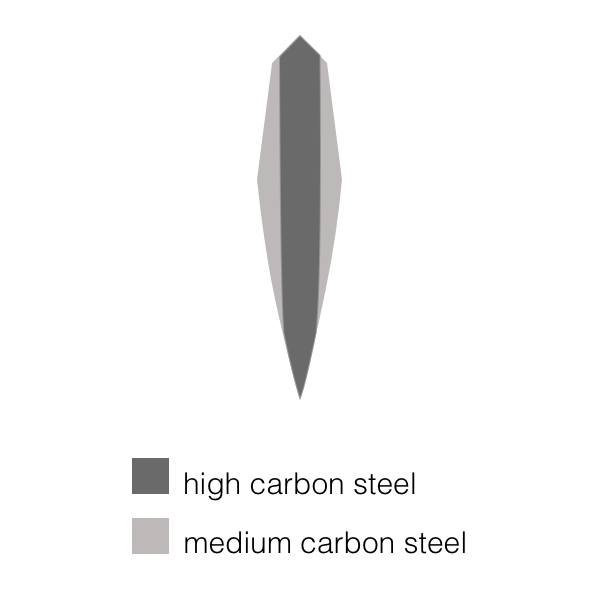 An advantage of this construction is that the blade can bear a lot of polishing and still have core steel exposed at the edge, whereas with other constructions, softer core steel would at some point be exposed.

This photo shows how the edge steel is much brighter and of a different structure.

The appearance of a burl grain in the shinogi-ji (the area above the ridgeline) on this sword is quite unusual.

At the back of the tang is chiseled a mark, probably the Japanese shorthand for "20".

Some pitting was left in place by the polisher, a conscious choice that helps to preserve as much of the original form, thickness, and therefore handling characteristics as possible. Otherwise, in good shape. See photos.

The blade comes with old N.B.T.H.K. Kicho Ninteisho papers, meaning "Precious Work", attributing it to one of the Jumyo (寿命) smiths working in the Shinshinto era of circa 1780-1876. It needs to be mentioned that such old papers aren't deemed as valuable as new ones, although the old white papers tend to be more accurate than the old green papers. 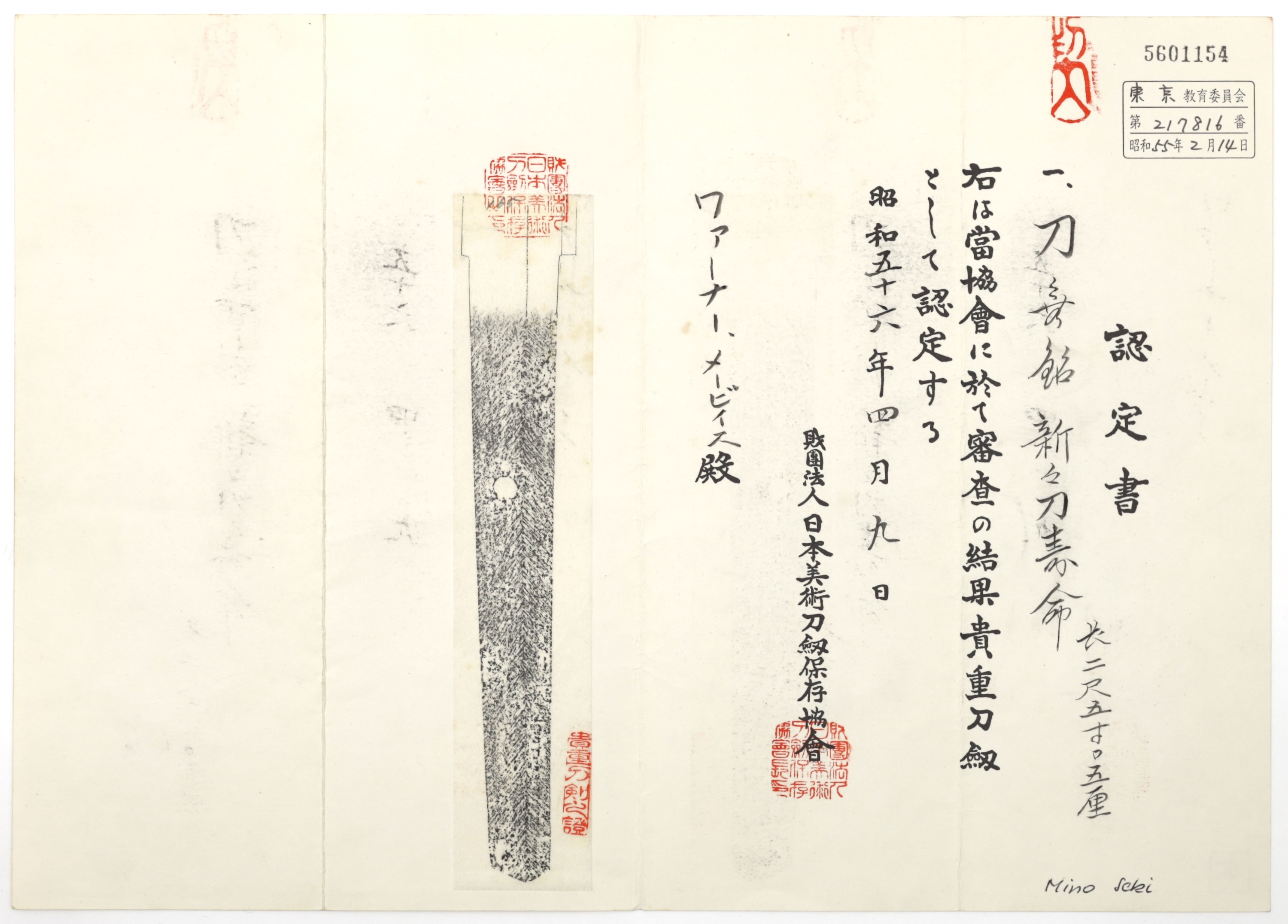 That said, I agree with the Jumyo attribution on this one, and so do others who have examined the blade. Looking at the very shallow curvature and large-ish tip, the blade feels earlier, say circa 1700-1750.

But, the long blade with very shallow curvature does remind of the so-called kinnōtō or "royalist swords" that were in fashion among samurai who supported the emperor after the fall of the Tokugawa shogunate. This was during the bakumatsu era of 1853 to 1867.1 The combination of the black scabbard with cream-colored wrap was also popular at that time, although most were nowhere as ornate as this one.2

Smiths signing with the name Jumyo have been active in Mino from the late 1200s onwards, and the line continued all the way to the early 20th century. Looking at the time of manufacture of this sword, we arrive at a succession of Jumyo smiths who mainly operated from Shimizu (清水).1

Because the name Jumyo (寿命) means "long life," these blades were said to have made popular gifts to high-level people like Daimyo. The koshirae of this blade seems to allude to more well-wishes.

The sword comes in very fine koshirae with mountings of the prized copper-gold alloy shakudō that was artificially patinated to a "raven black", covered with fine dotting called nanako. Such mounts were appropriate for wear with formal samurai attire. The style originated with the Gotō family in the 15th century and became very popular in the Edo period. 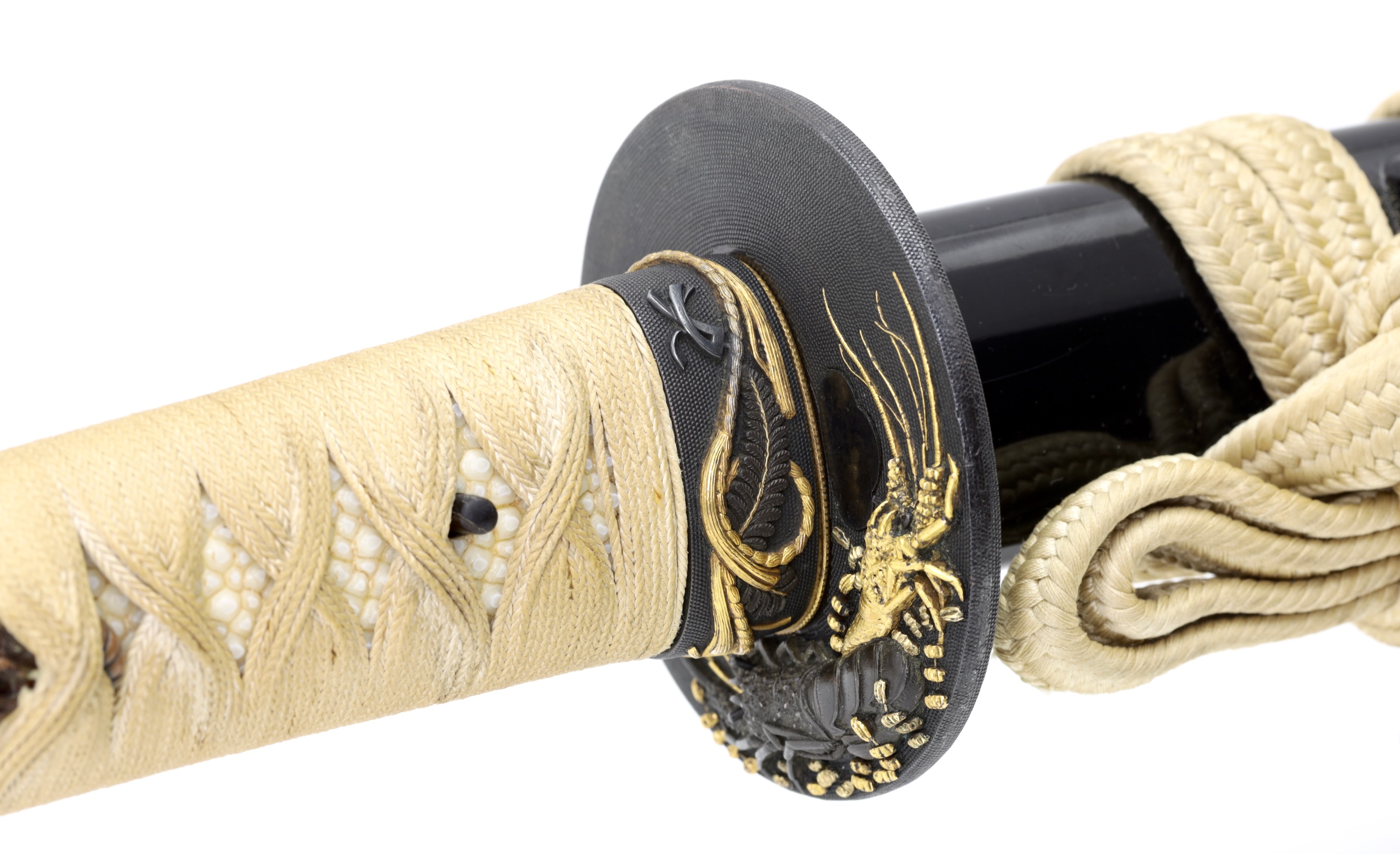 Its centerpiece is the tsuba. It features three spiny lobsters, two on one side and one on the other. One is made of gold, the others of a silver alloy that is patinated to a dark grey. The work is done in very high relief, with great attention to detail. 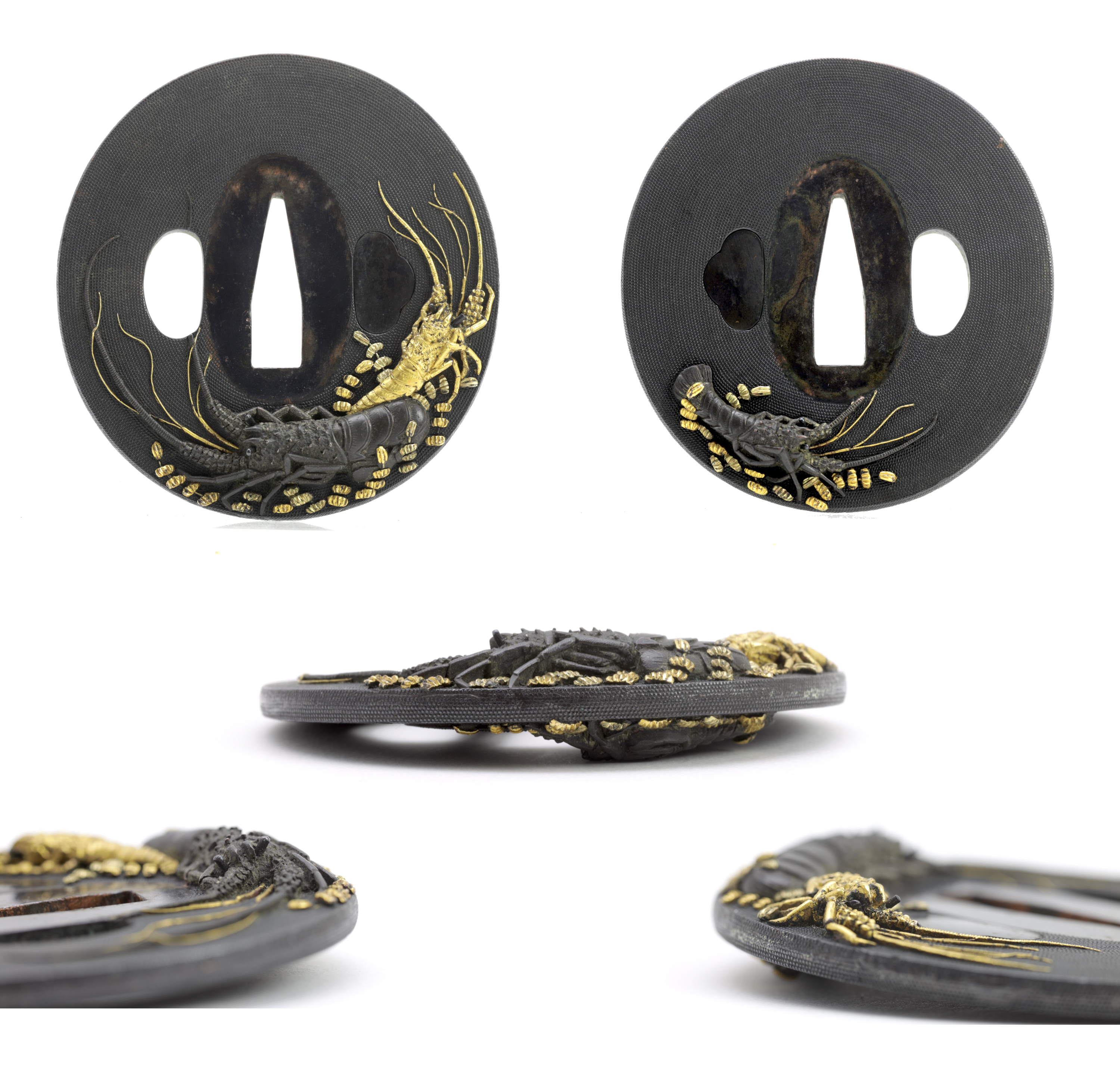 The fine work continues on the fuchi and kashira (ferrule & pommel), with the latter being decorated with a golden spiny lobster on a nanako background. Spiny lobsters are symbols of longevity.

The fuchi is signed: 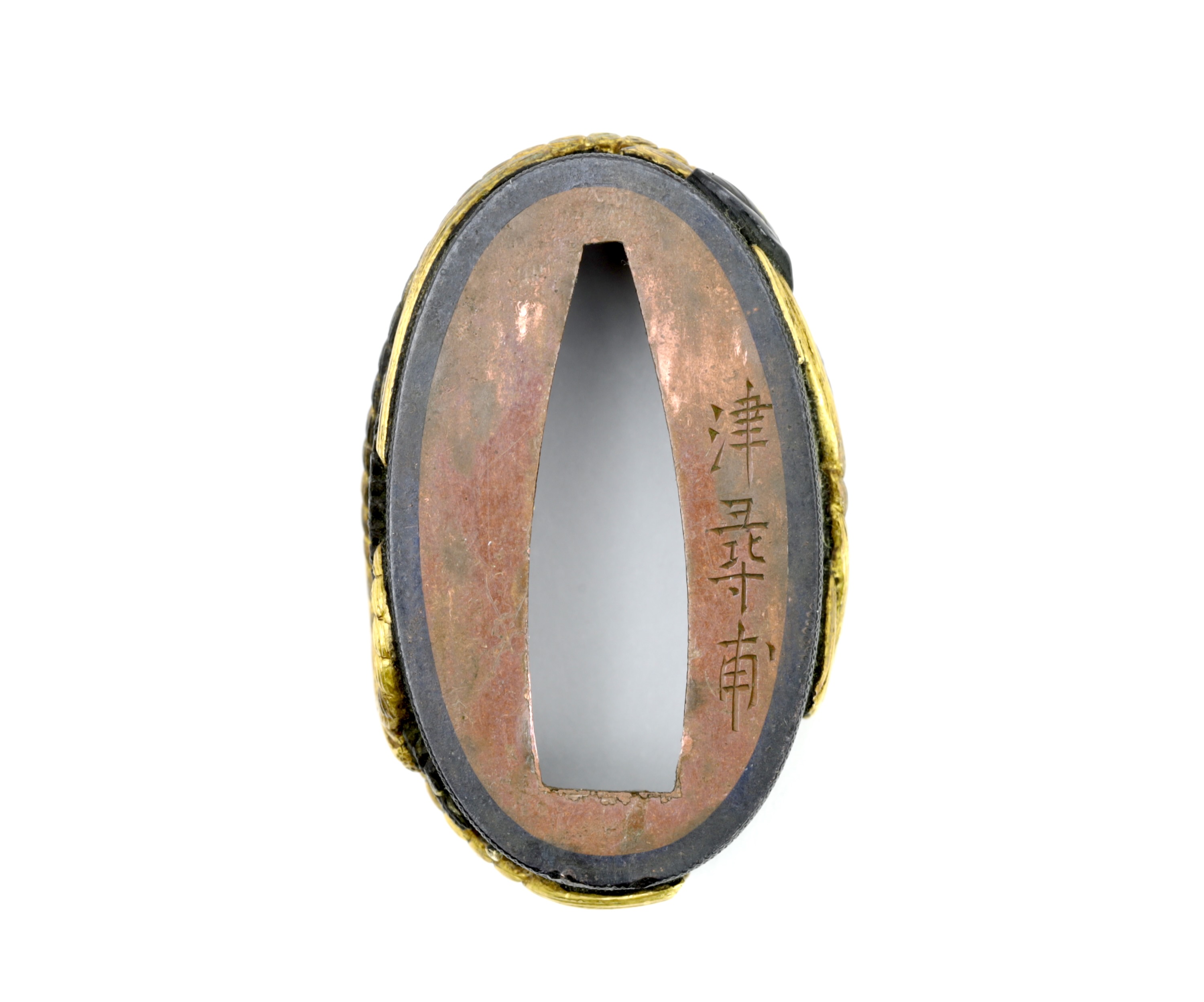 Tsu Jinpo (1721-1762) was a very skilled but short-lived fitting maker of the Nomura school, who also worked in the typical Gotō style as seen here. The signature, however, doesn't match the reference book examples and is clearly not by the artist.

The work on the fuchi is of such a high level that whoever made it could stand on his own two feet as an artist. I therefore believe the piece probably left the workshop unsigned, and someone later added this attribution. Such things were done to make a gift seem more valuable, or it could be an honest attribution by an owner who thought the work was done by this artist. In terms of quality, it is indeed right up there. 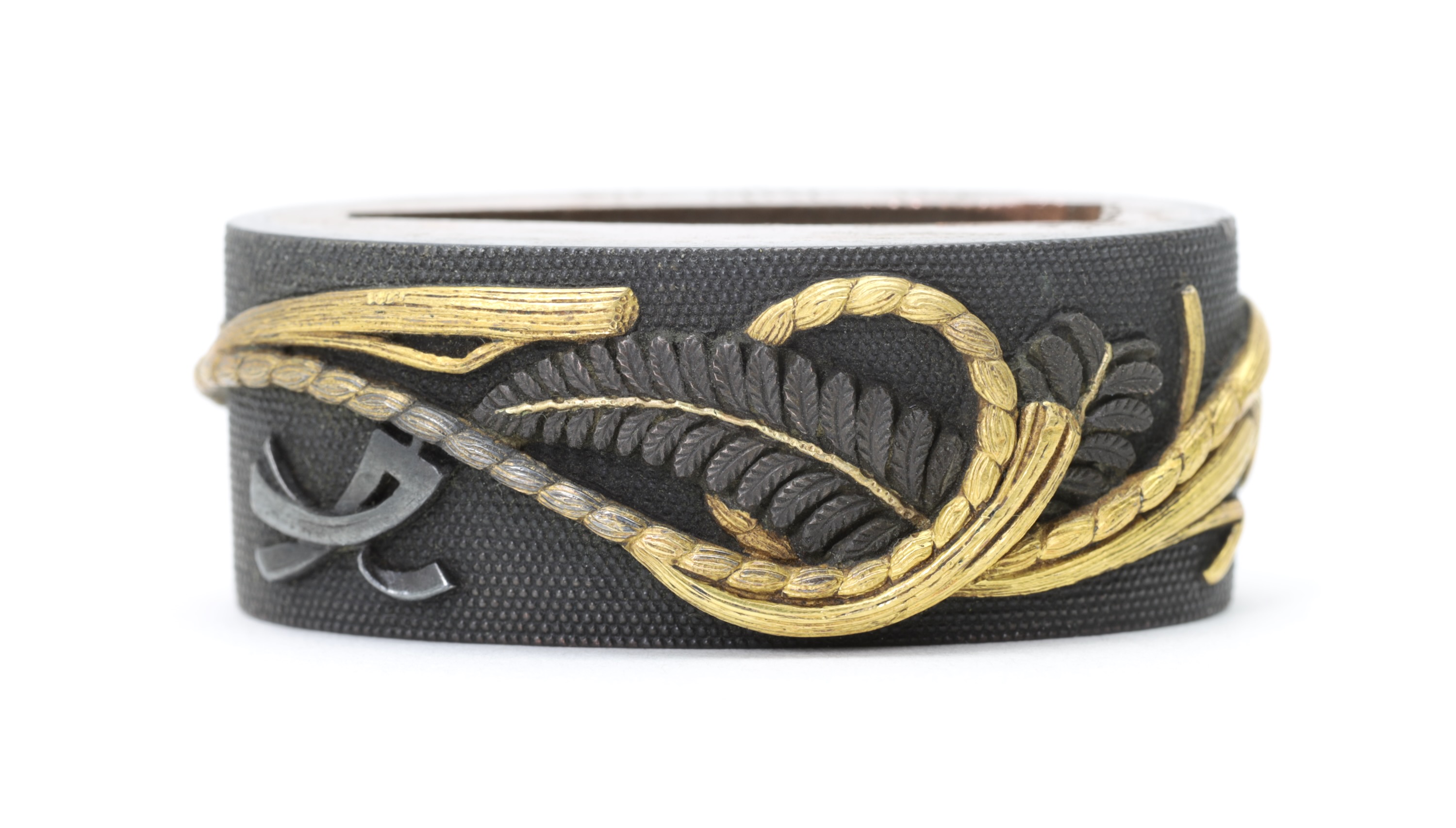 The tsuka is covered with ray-skin and wrapped in jabara-ito maki-zuka (蛇腹糸巻柄) or "snake belly hilt wrap" style. It is a special decorative wrapping method that uses thin twisted cords that are laid side-by-side as to look like a braid.

It has two spiny lobster menuki.

The high-quality habaki is made of two-piece gold with copper lining. 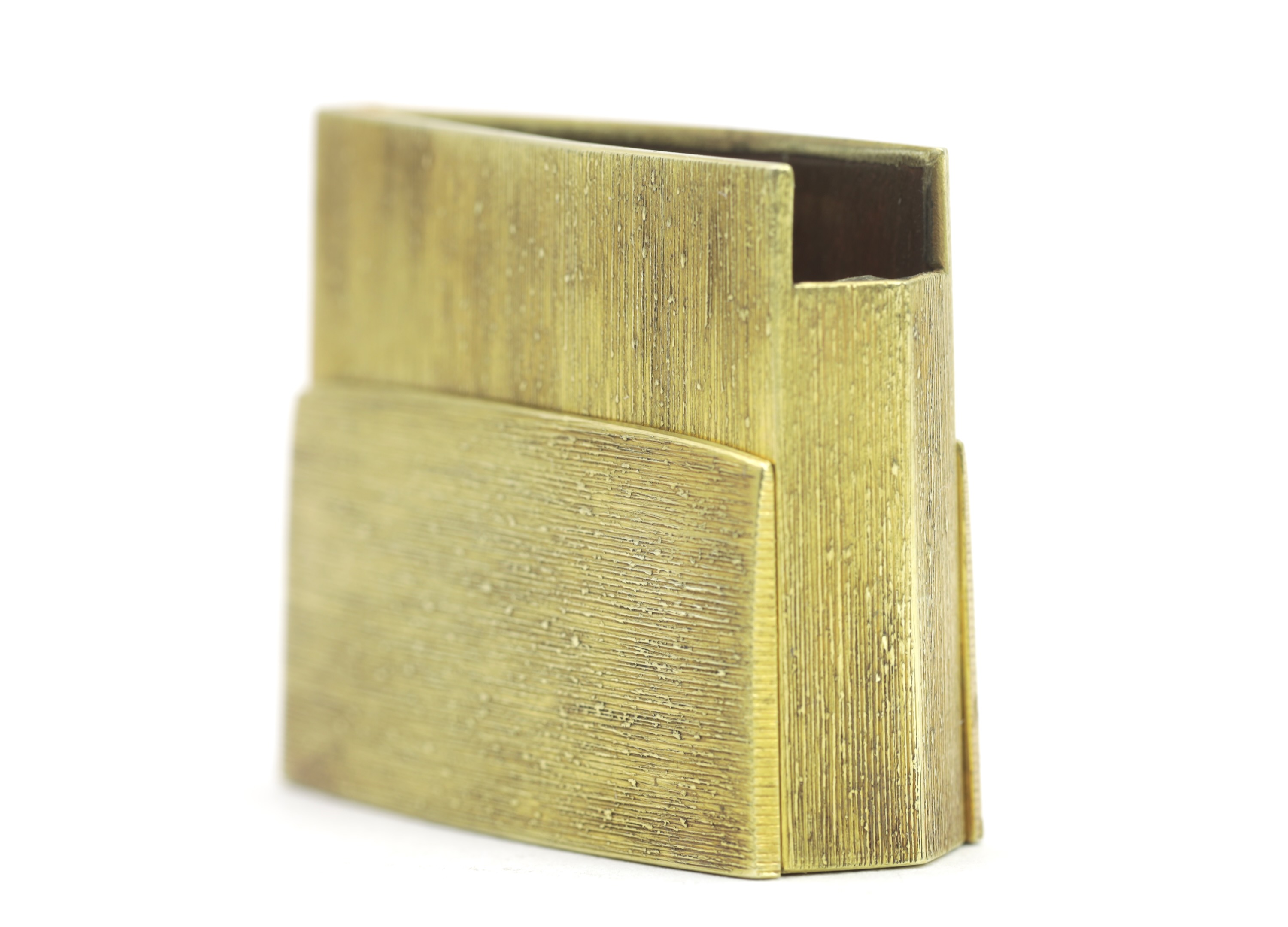 The saya is covered with glossy black urushi lacquer. Some minor damage to the lacquer from wear. It retains its original cream-colored silk sageo.

A very large and heavy Jumyo katana blade from Mino that probably dates from the 18th to mid-19th century. Because Jumyo can be read as "long life," such blades were popular as auspicious gifts.

It comes in a beautiful koshirae with fine shakudō mounts with spiny lobster and shimenawa decoration that seem to further add to the auspicious nature of the piece. 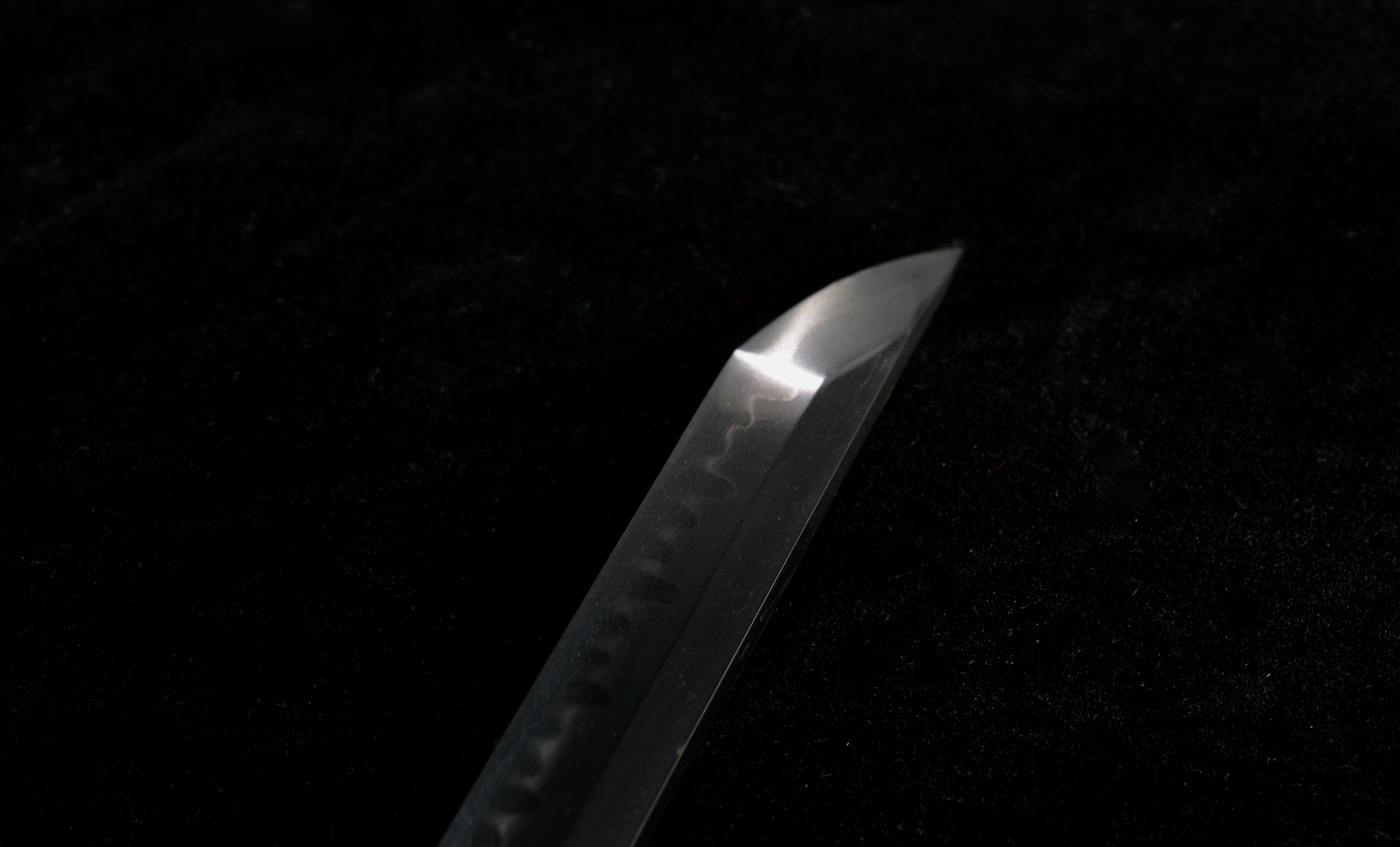 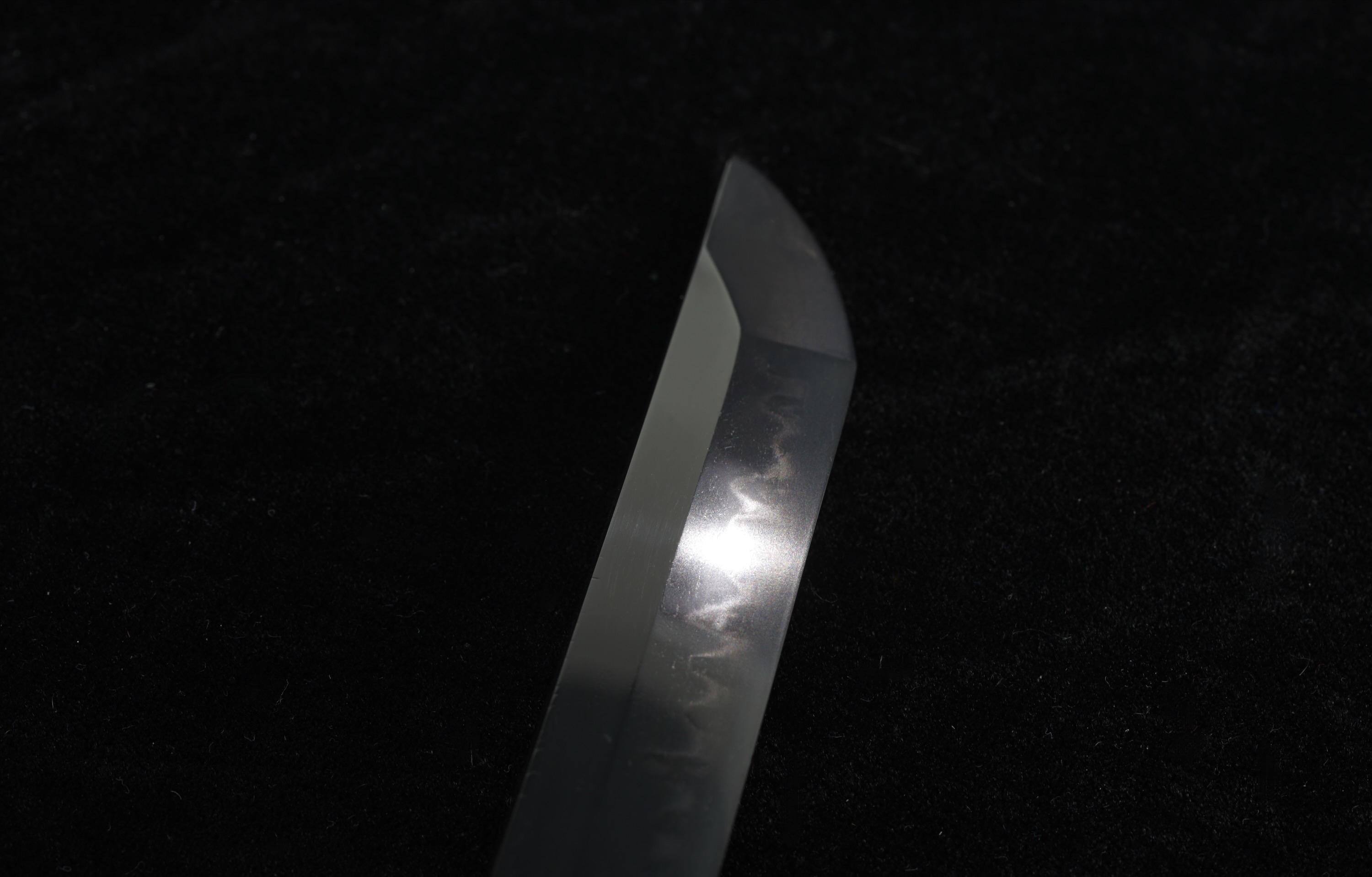 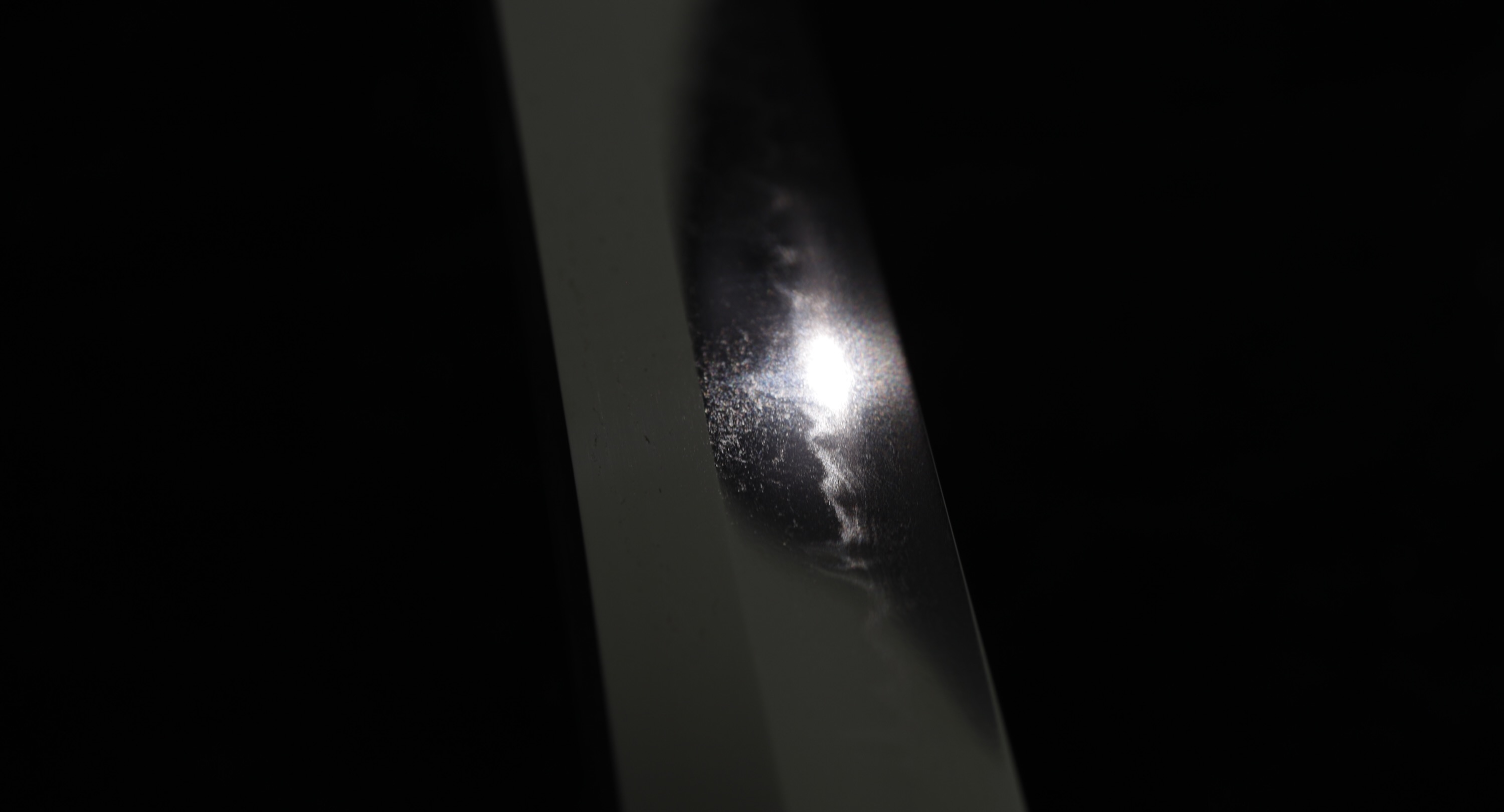 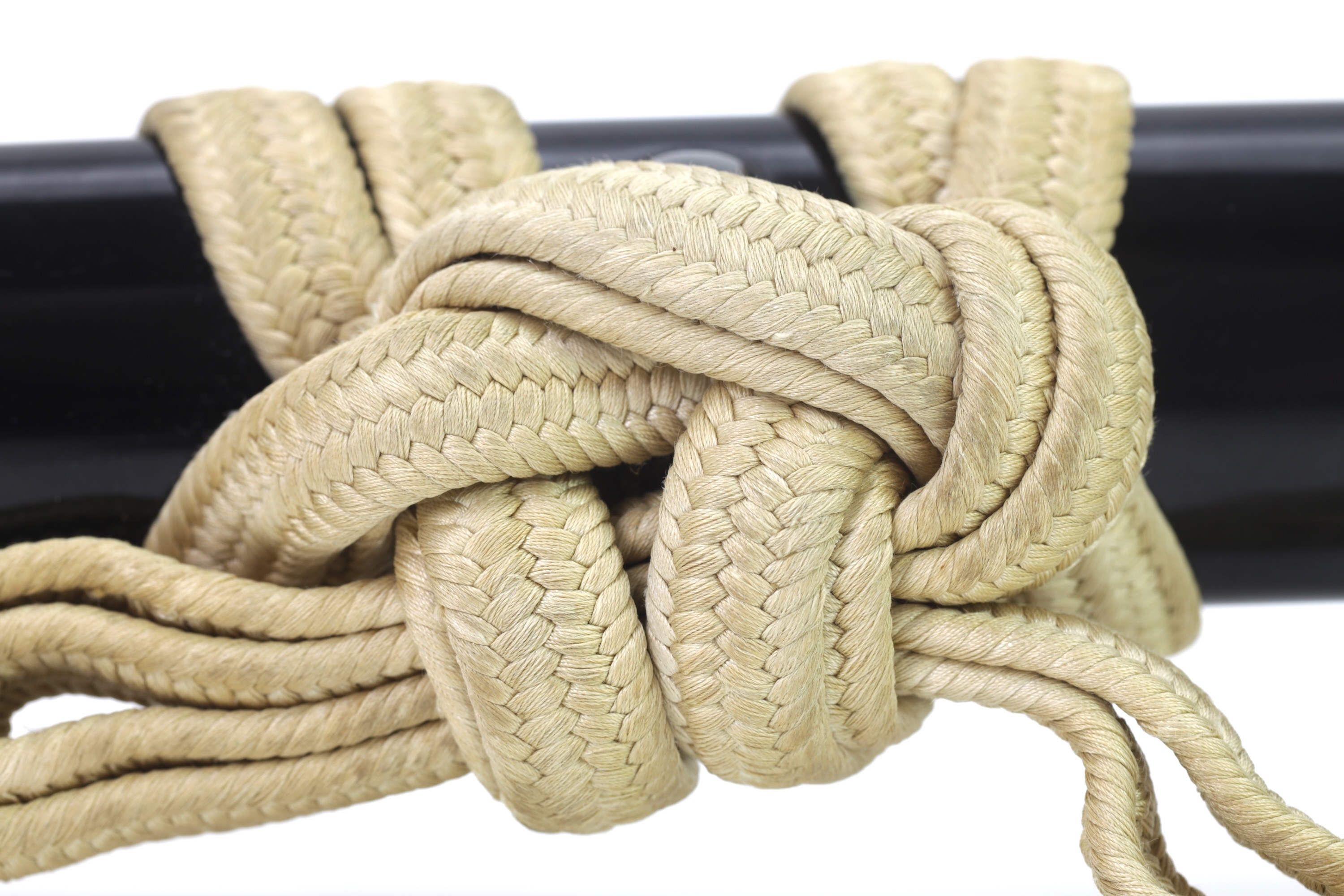 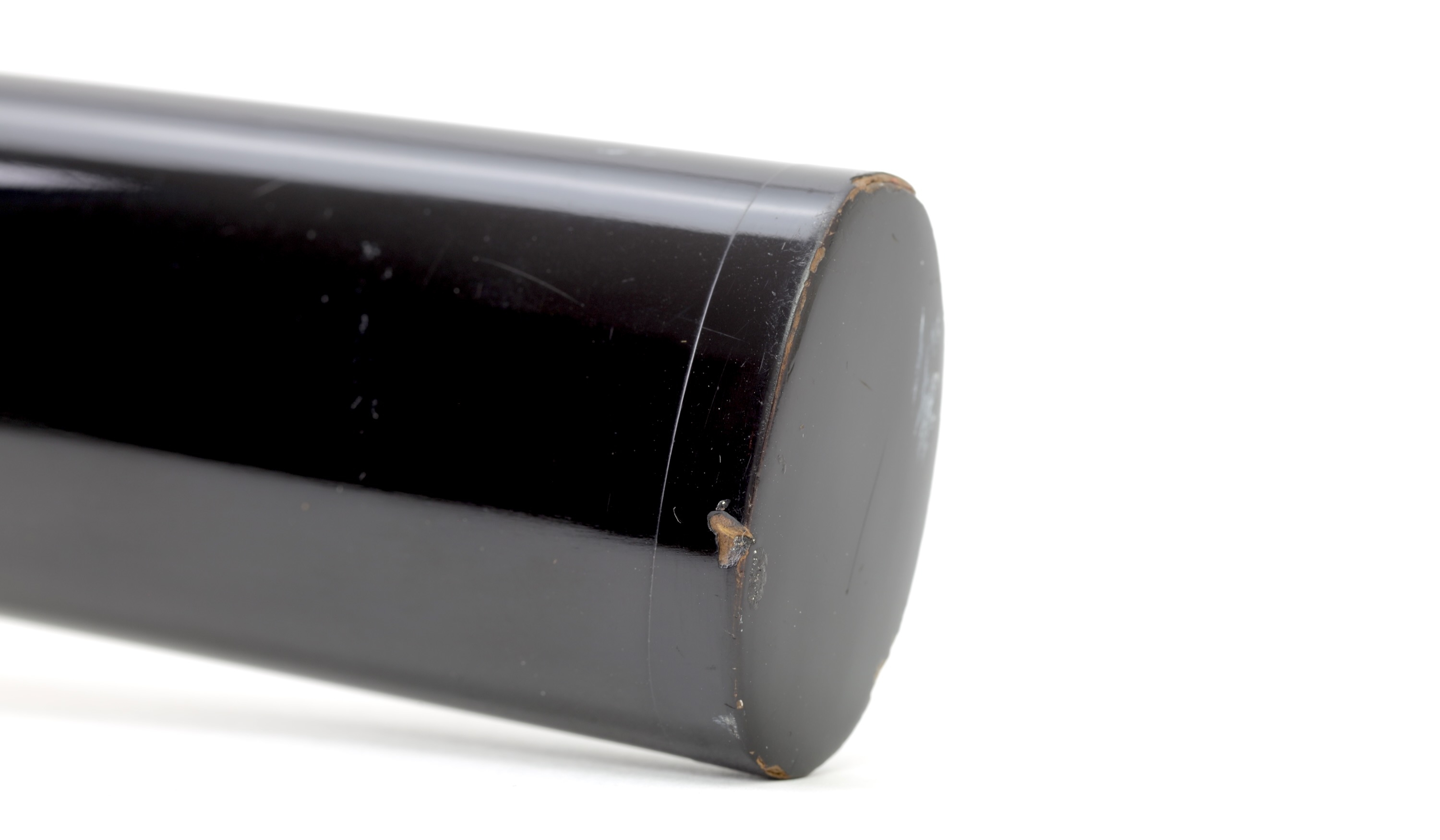 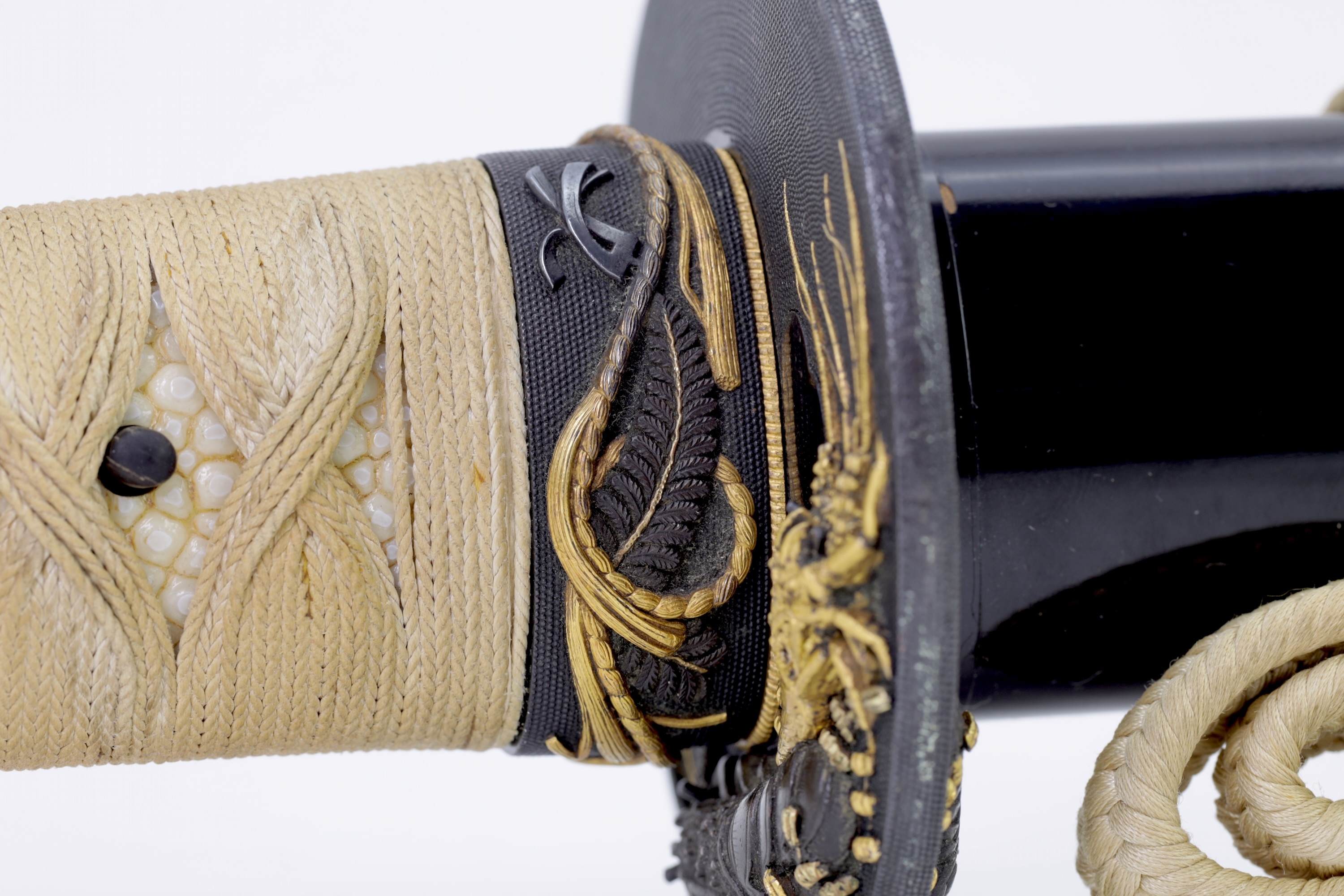 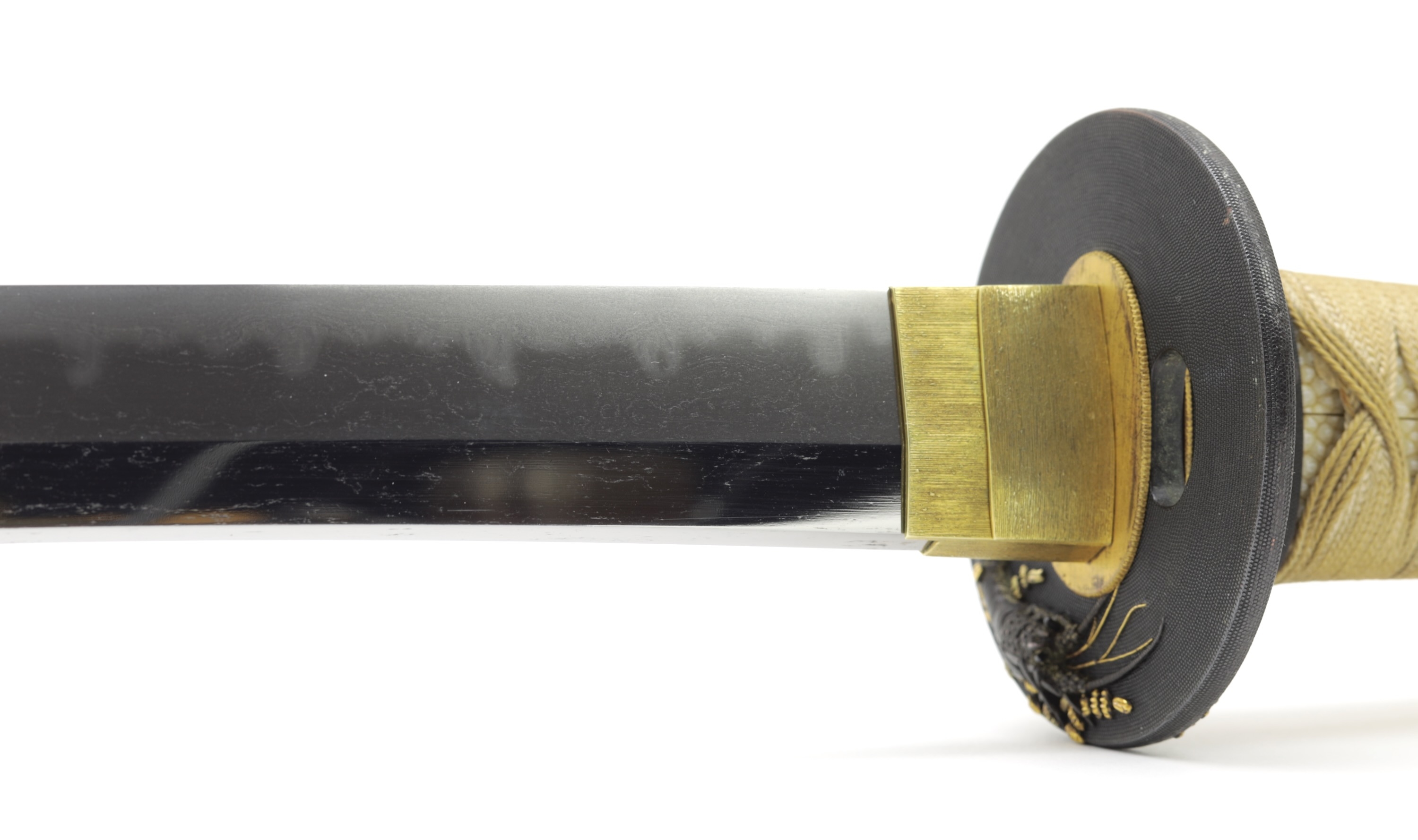 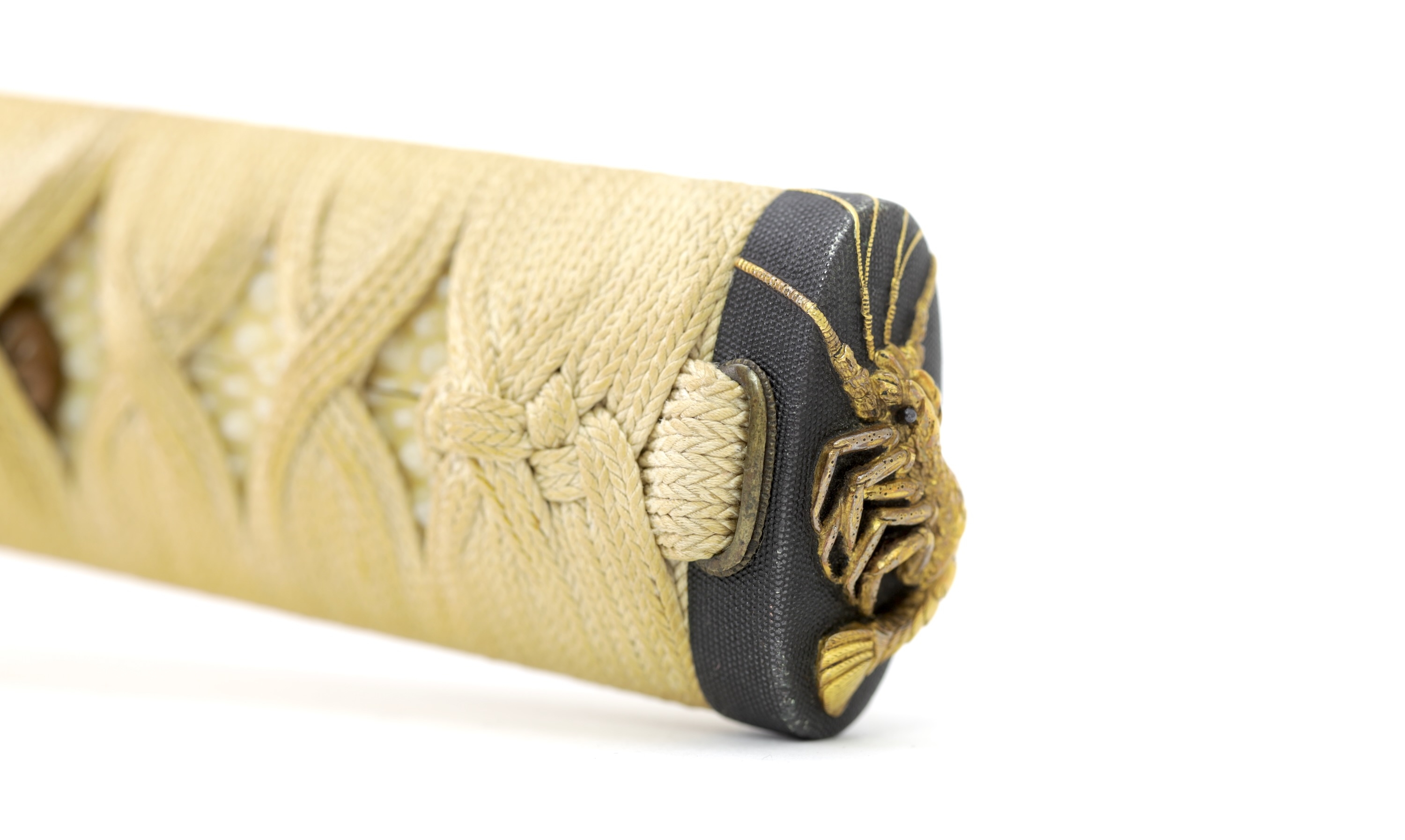 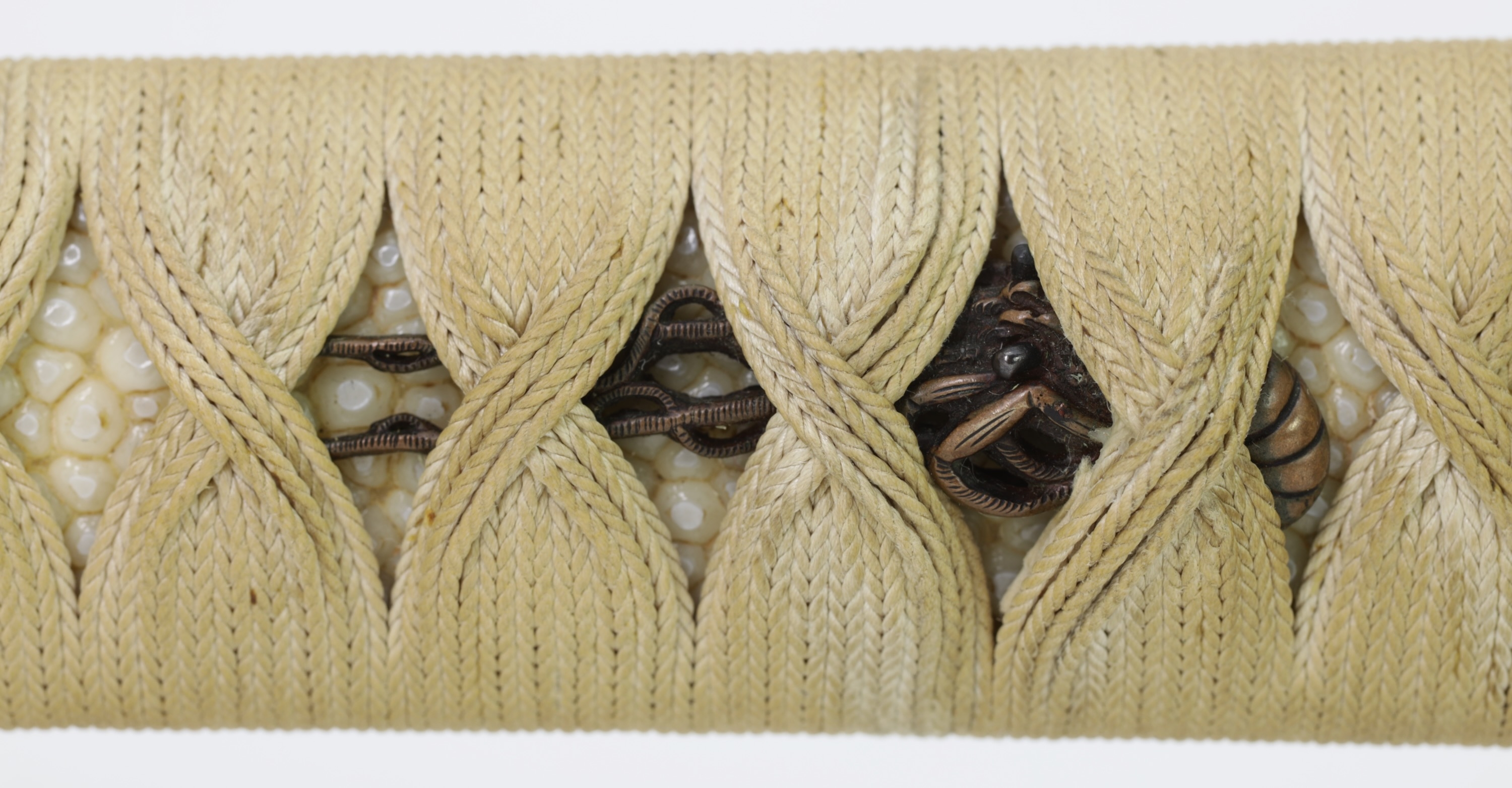 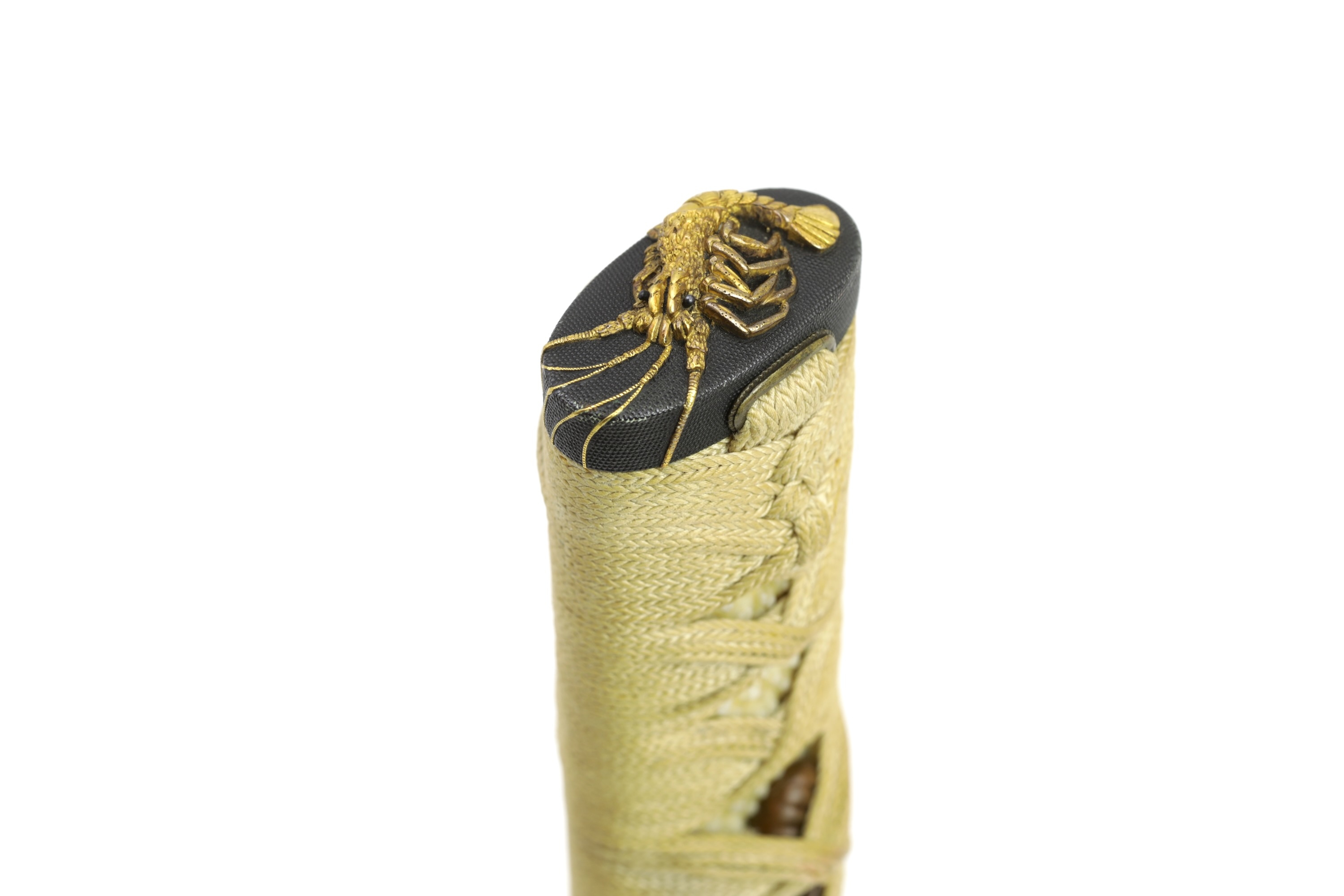 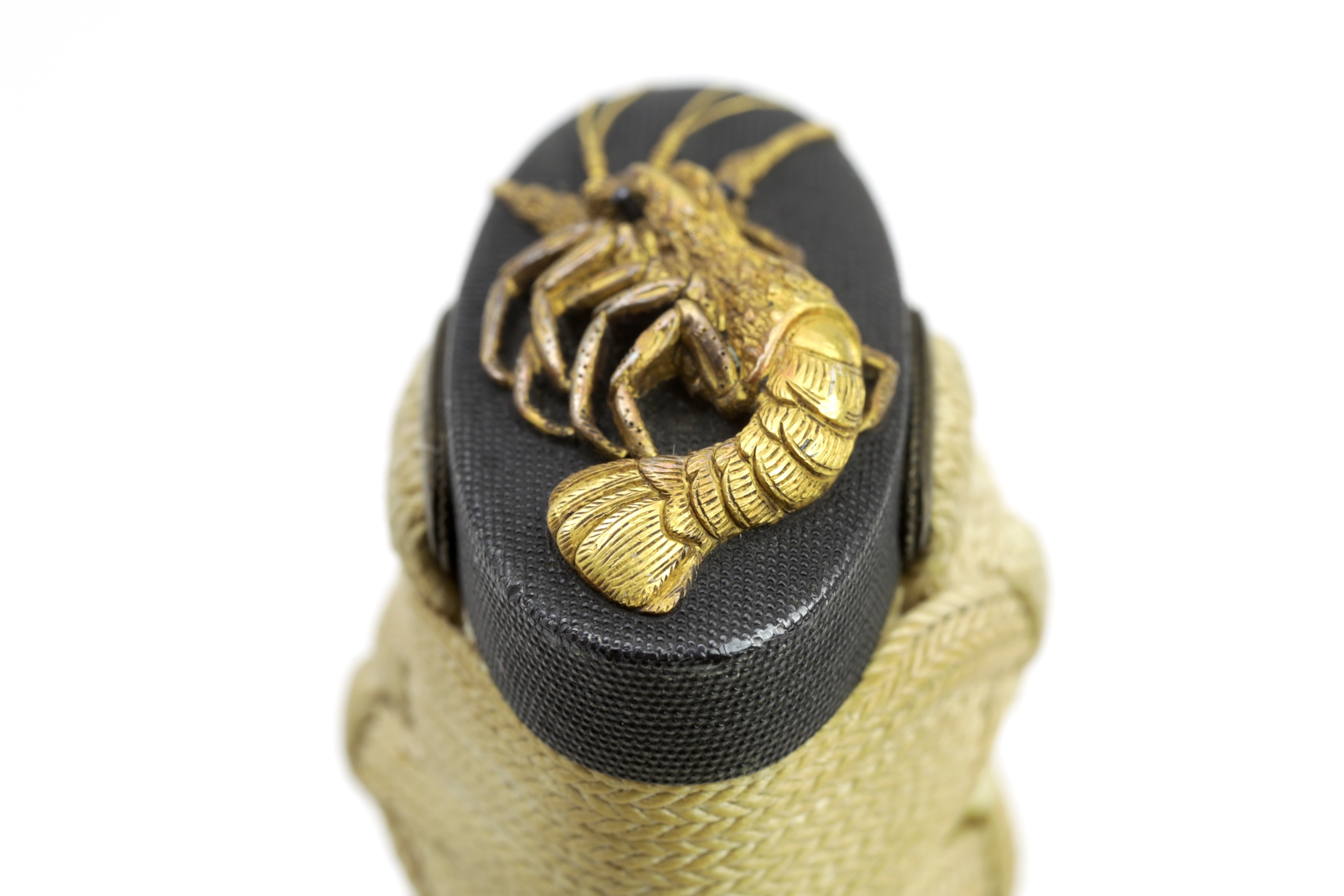 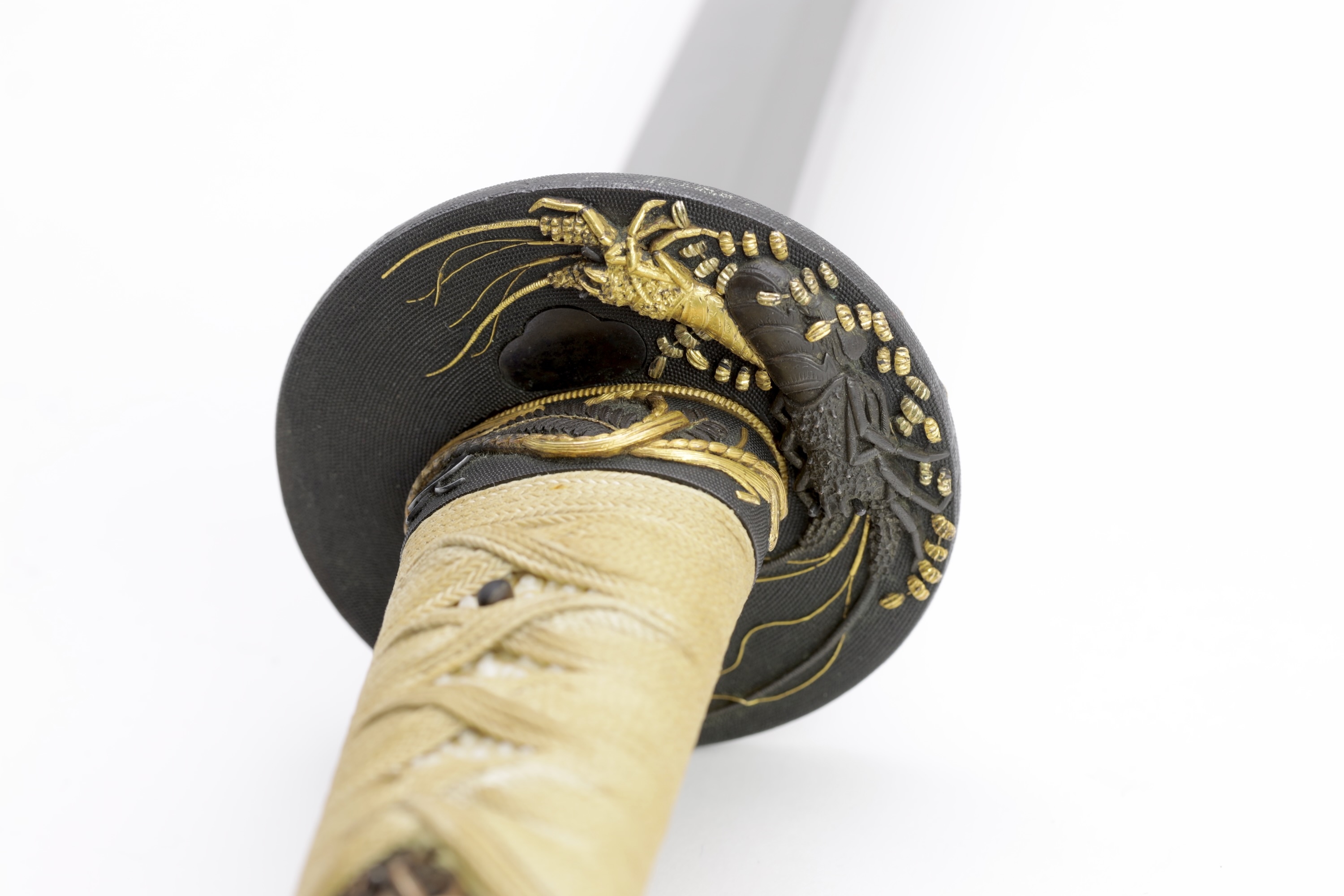 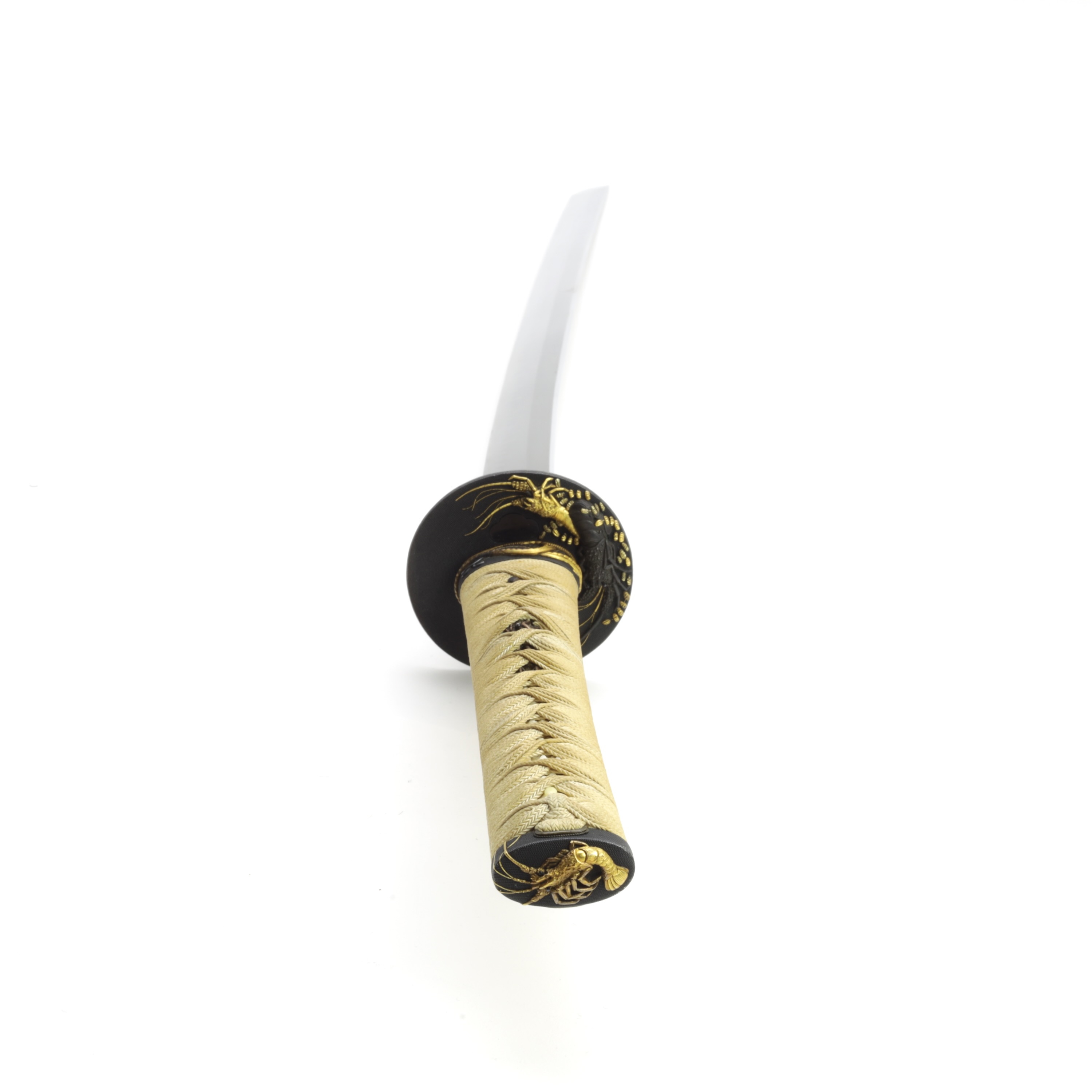