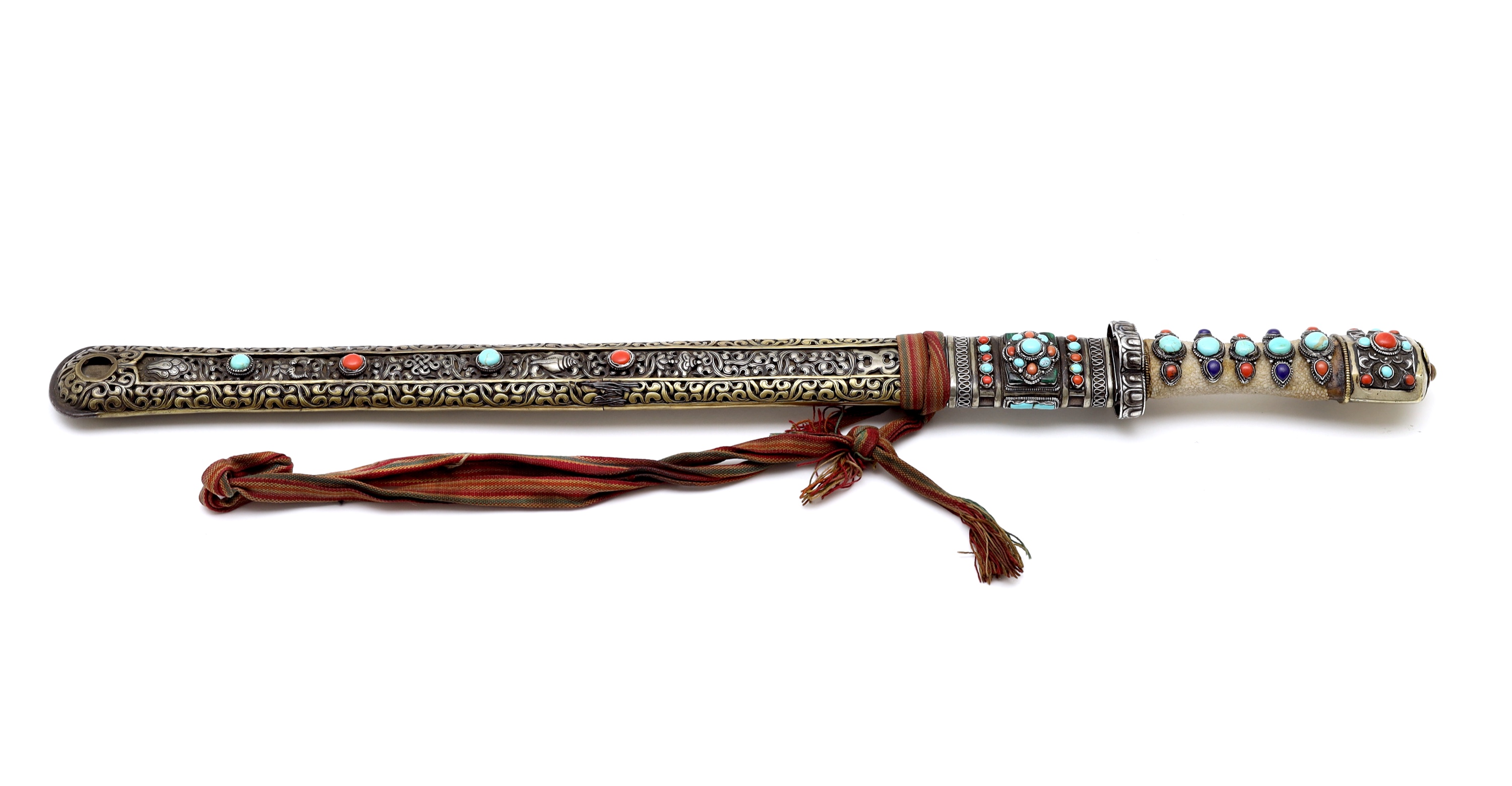 This piece is part of a small group of daggers and shortswords that are richly adorned with corals and semi-precious stones usually including turquoise, lapis lazuli, and sometimes malachite. Common traits among the group are pointy, Tibetan-style blades in Tibetan-style U-framed scabbards, a Bhutanese style waisted grip and pommel with flattened octagonal cross-section, and a Chinese style lobed guard with raised rim.

This mix of styles betrays their origin, which is probably the borderlands between Eastern Tibet and Sichuan. The Qianlong emperor had a shortsword of the style. Published collection records call the piece a Jīnchuān fān jiàn (金川番劍) or "Jinchuan Aborigines Dagger". It also mentions that it is "the most precious thing from the area of Qiong-Zuo", which generally refers to the areas inhabited by minorities in southwest China. 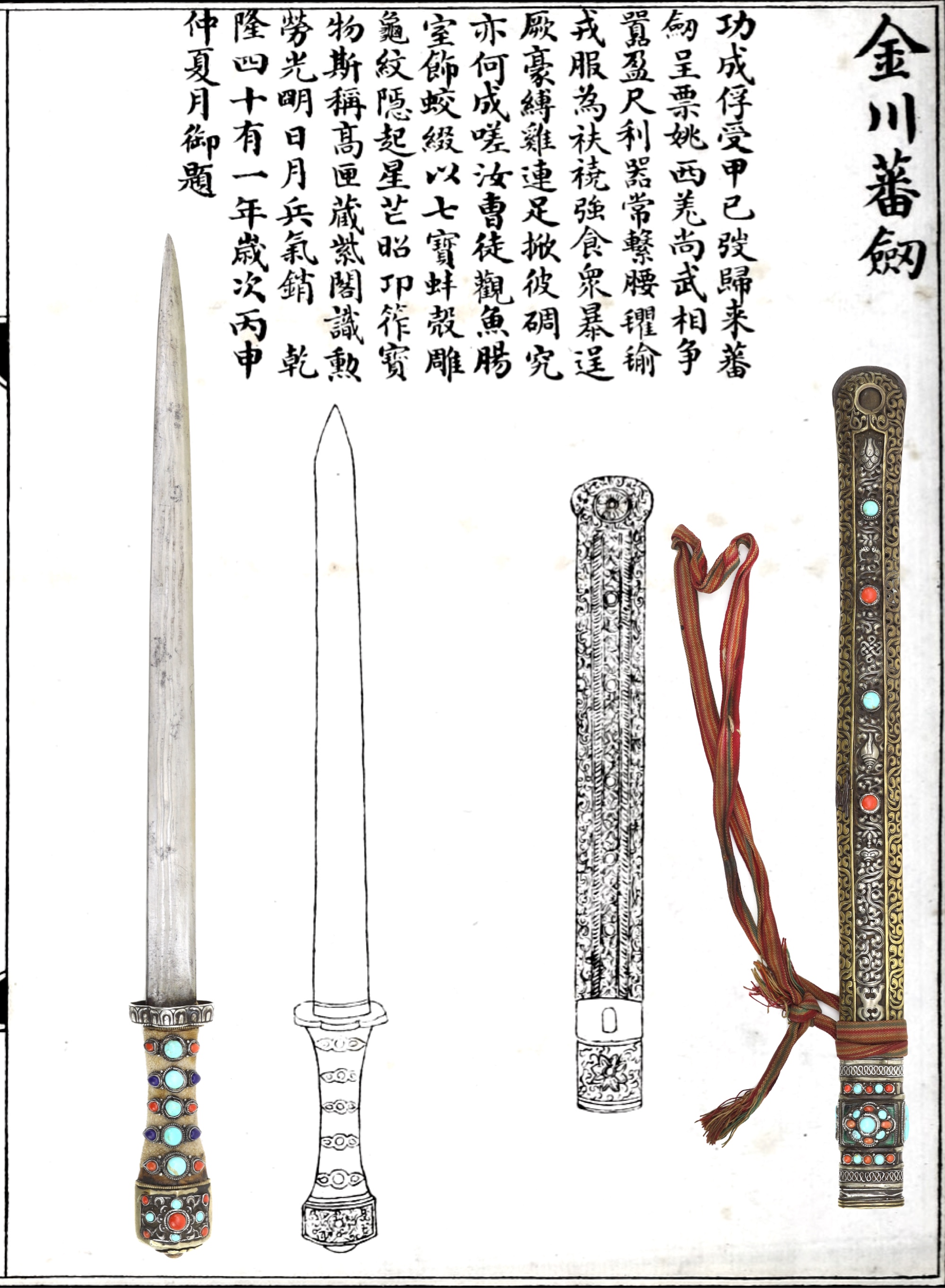 This dagger in color overlaid on the Qianlong collection
record of his Jīnchuān fān jiàn.

Between 1747 and 1773, Jinchuan in western Sichuan was the scene of two fierce wars, and the dagger was obtained during the First Jinchuan War of 1748-1751. The collection catalog entry is dated to the summer of 1776, but it does not state whether this particular piece was collected during the first or second Jinchuan campaign.

Qianlong was so fond of the style that he used many of their stylistic elements in his redesigns for imperial guard swords for worn during special auspicious ceremonies, called Shénfēng (神鋒) or "divine edge".2

Notes
1. Xīqīng xù jiàn jiǎ biān (西清续鉴甲编), a catalog of antiquities that was compiled for the Nán shū fáng ( 南書房) or "Southern Library" of the imperial palace and published in 1791.
2. Huangchao Liqi Tushi (皇朝禮器圖式) or "Illustrated Regulations on the Ceremonial Paraphernalia of the Present Dynasty". An imperially commissioned text that was published in 1766 based on a 1759 manuscript. Chapter 15. And: Gugong Bowuyuan Cang Wenwu Zhenpin Quanji 56: Qing gong Wubei (故宫博物院藏文物珍品全集 56: 清宫武备) or "The Complete Collection of Treasures of the Palace Museum, Beijing 56: Armaments and Military Provisions", Palace Museum, Beijing. Published Hong Kong 2008. Pages 131-133.

It has a narrow blade that gradually tapers to a sharp point. The blade is forged in the traditional Tibetan manner with so-called "hairpin" laminations of alternating silverish "male" and darker "female" iron/steel.

The hilt has a large pommel of flattened hexagonal cross-section, made of báitóng, an alloy of copper and nickel that was found in the area of Yunnan. It was highly prized and its trade was strictly regulated until German metallurgists managed to recreate it in the 18th century.

At the facing side of the pommel is a rectangular piece of silver, worked in repousse and holding eight bezels for stones and corals represented the eightfold path of the Buddha. The tang end is peened over a floral brass washer with a lozenge-shaped cap.

The guard is a small four-lobed cup guard made of silver, with a stylized lotus petal border. The lotus, emerging in the mud and growing towards the light where it unfolds as a pristine flower, resembles the path towards enlightenment.

The waisted wooden grip is covered with ray-skin and richly adorned with five sets of bezels, each holding three ornaments in a mix of turquoise, lapis lazuli and coral.

The scabbard is made of two thin pieces of wood held together by a brass U-frame of classical Tibetan form. The frame is richly pierced and engraved on the facing side. It holds a silver center plate similarly decorated, with the addition of Buddhist symbols including a pair of fish, an umbrella, a conch shell, and an eternal knot with alternating bezels for corals and turquoises.

The wooden backplate is covered with an unusual dyed fabric.

The scabbard mouthpiece consists of a complex sleeve with applied meandering silver wire borders and groups of bezels of various forms for pieces of malachites, corals, and turquoise.

It comes with an old cotton ribbon.

This is probably the best of this group of daggers that's I've studied so far in terms of original workmanship. Unfortunately, it was also the one that reached me in possibly the worst condition: Somewhere during the course of its lifetime, it got into the hands of someone who took out each and every precious stone and coral, leaving only the malachite. It was probably done by a local who at that point could get more for the stones than for the shortsword.

I bought it because I felt it needed saving, but it sat in a drawer for a long time, not knowing how to approach it. Until one day I talked to Karel Schermerhorn of Haarlemse Zilversmederij K.H. Schermerhorn who said he could do it.

I laid out the color scheme based on extant examples. Working together with a gem expert, Karel repaired the damaged bezels, recreated the lost ones, and started to replace the stones and corals. As it turned out, wood was missing under the silver wire wrap so we used a piece of wood to fill it, after which I re-covered the grip with white stingray skin, on top of which Karel re-attached the three bevels and attached two of his own making, carefully matching the original workmanship.

It was a costly and time-consuming affair but I am glad we did it so we could grant this rare shortsword a new lease on life.

Original peening at the pommel still intact, confirming that hilt, guard, handle and blade were "born together". Blade, lightly cleaned, in good condition. One crack in the scabbard frame, with an old silver wire wrap repair. We chose to leave this repair, as we thought it to be "working life" and thus part of the history of the piece.

Close-up of the old repair.

This dagger is part of an illustrious group of similar items that seem to date from the 18th century and earlier. Published examples are very rare. Apart from the one in the Qianlong emperor's collection mentioned above, there is an example kept in the Palace Museum in Shenyang.1 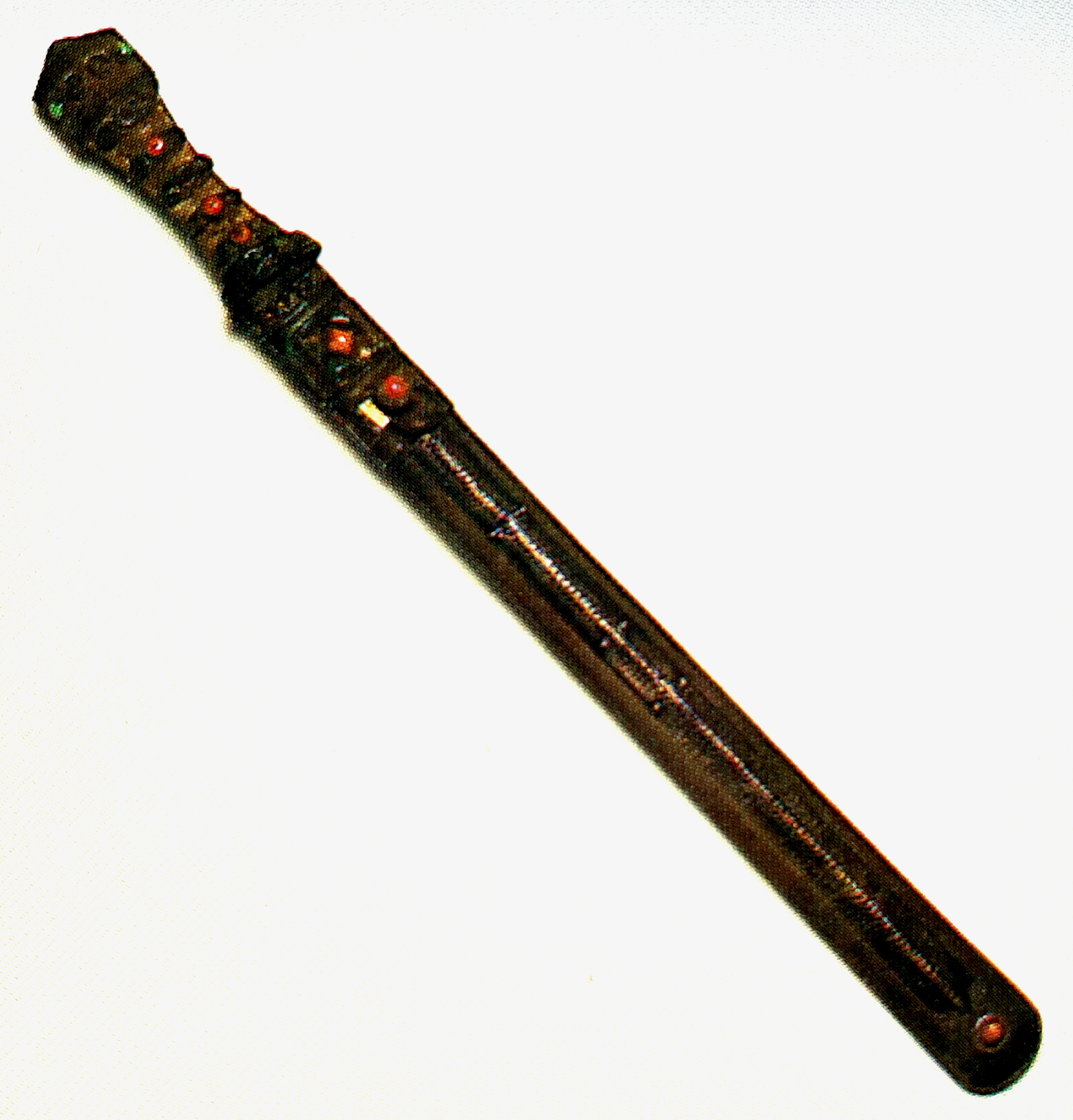 Another was published in Robert Hales' Islamic and Oriental Arms and Armour: A Lifetime's Passion, page 199. It is described as a Tibetan dagger of the 18th century.2

The pommel shape and construction are of a type I am used to seeing from the region from Arunachal Pradesh to Eastern Tibet and Western Sichuan. The Qing court collection cataloged a nearly identical example, obtained in the mid 18th century, as aboriginal Jinchuan. This wider area was previously known as the Kham region, and so I would attribute it to Kham, 18th century.

They seemed to have been highly appreciated in the 18th century already: The Qianlong emperor cherished one in his collection and modeled swords of his trusted guards after them, to be worn by his closest guards at important auspicious ceremonies. 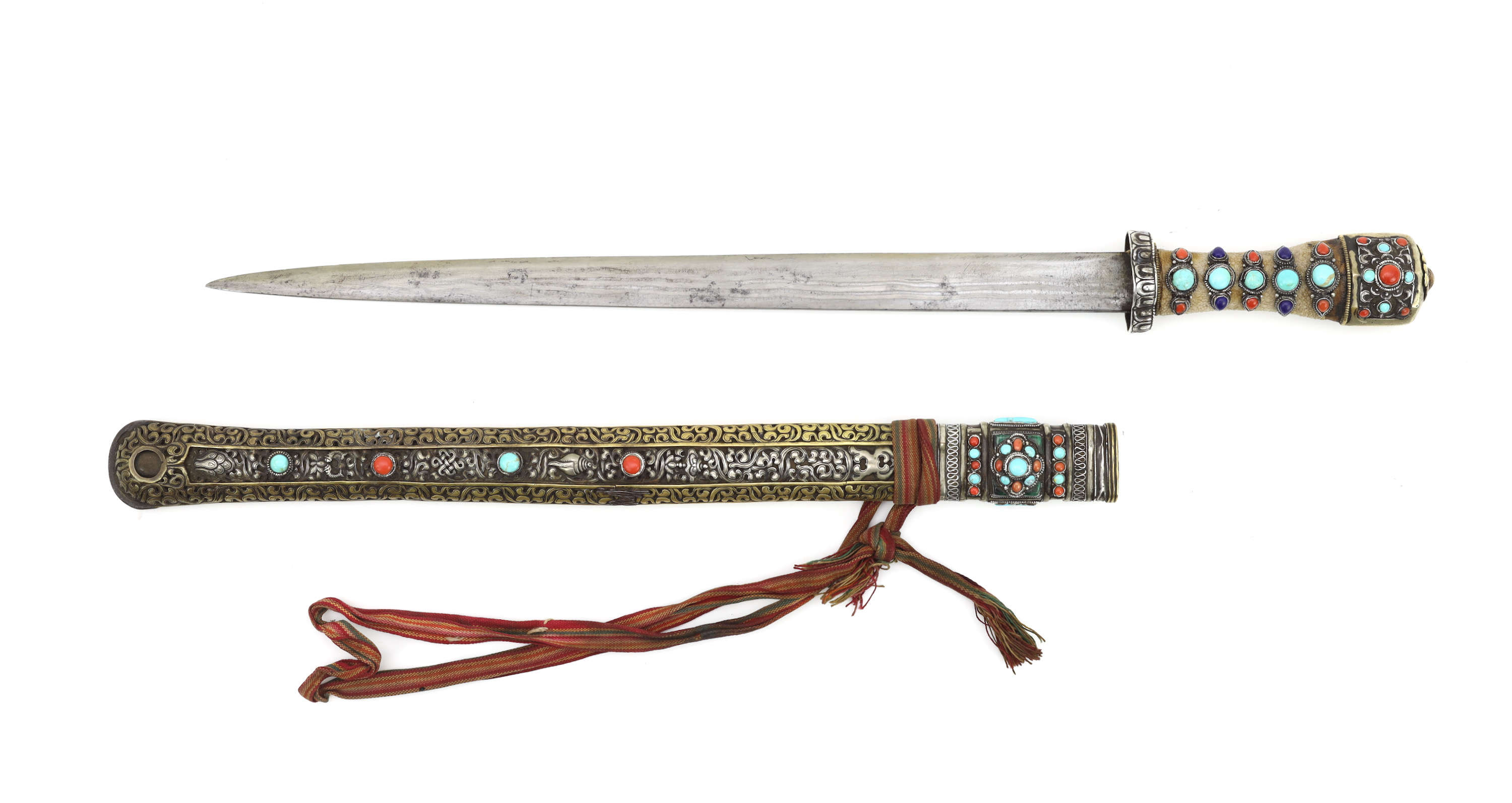 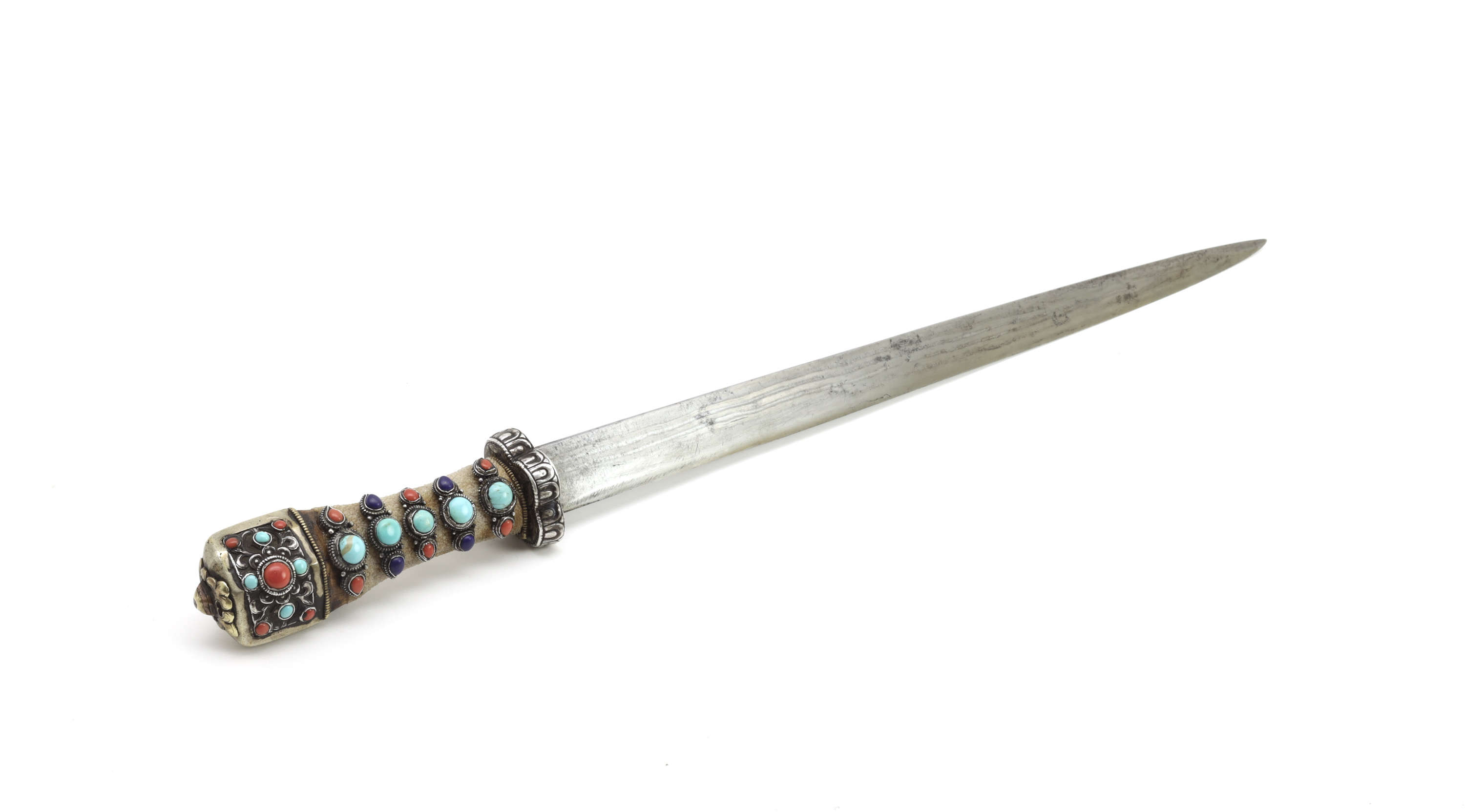