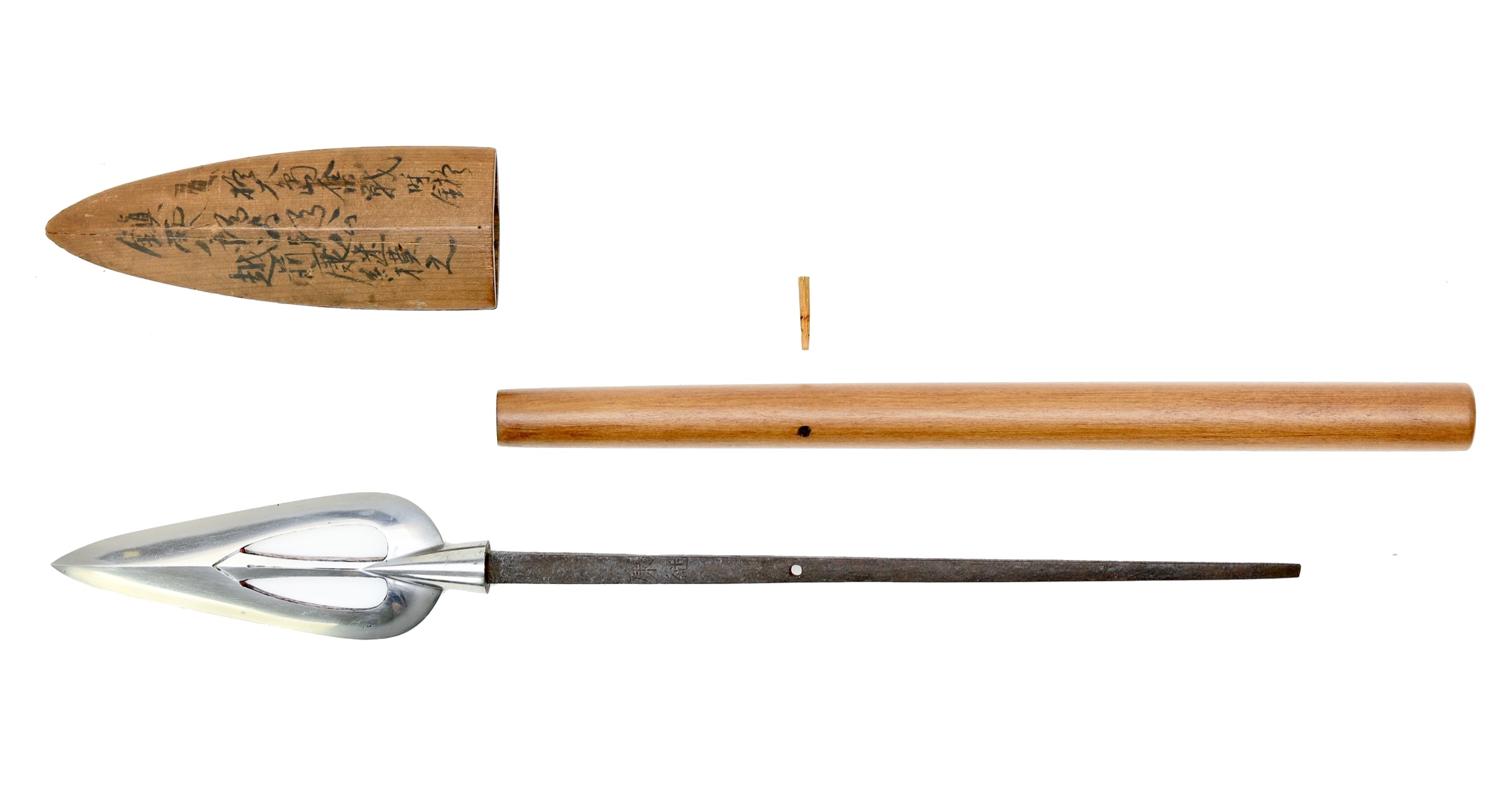 The thick blade of this yari (槍) is shaped like an oversized arrowhead. It has two large cutouts in the center that are painted on the inside with red lacquer. The rib that divides the two spaces is carved like a straightsword or ken. The head is seated on a thick, round cross-section base that connects to a long tang with a square cross-section.

The piece is in an old polish, but on close inspection can still make out a very subtle wood grain pattern, called masame. The grey effect we see along the edges is actually the result of a kesho polish, a special kind of polish where a stone is used to highlight the temperline (hamon). The true hamon is somewhat obscured in its current condition.

The typically long tang (nakago) has one drilled hole for the retainer peg, called mekugi ana.

The Yasutsugu line was a famous line of smiths that were the personal swordsmiths to the Tokugawa Shoguns for over 200 years. The Yasu in their name was granted to the 1st generation Yasutsugu by Tokugawa Ieyasu himself, founder and first shōgun of the Tokugawa shogunate.

The earlier Yasutsugu were known for making many replicas of important older pieces in the Tokugawa family collection.

The lineage started with the first Yasutsugu around 1600 and continued into the 12th generation who was active until the late 19th century. 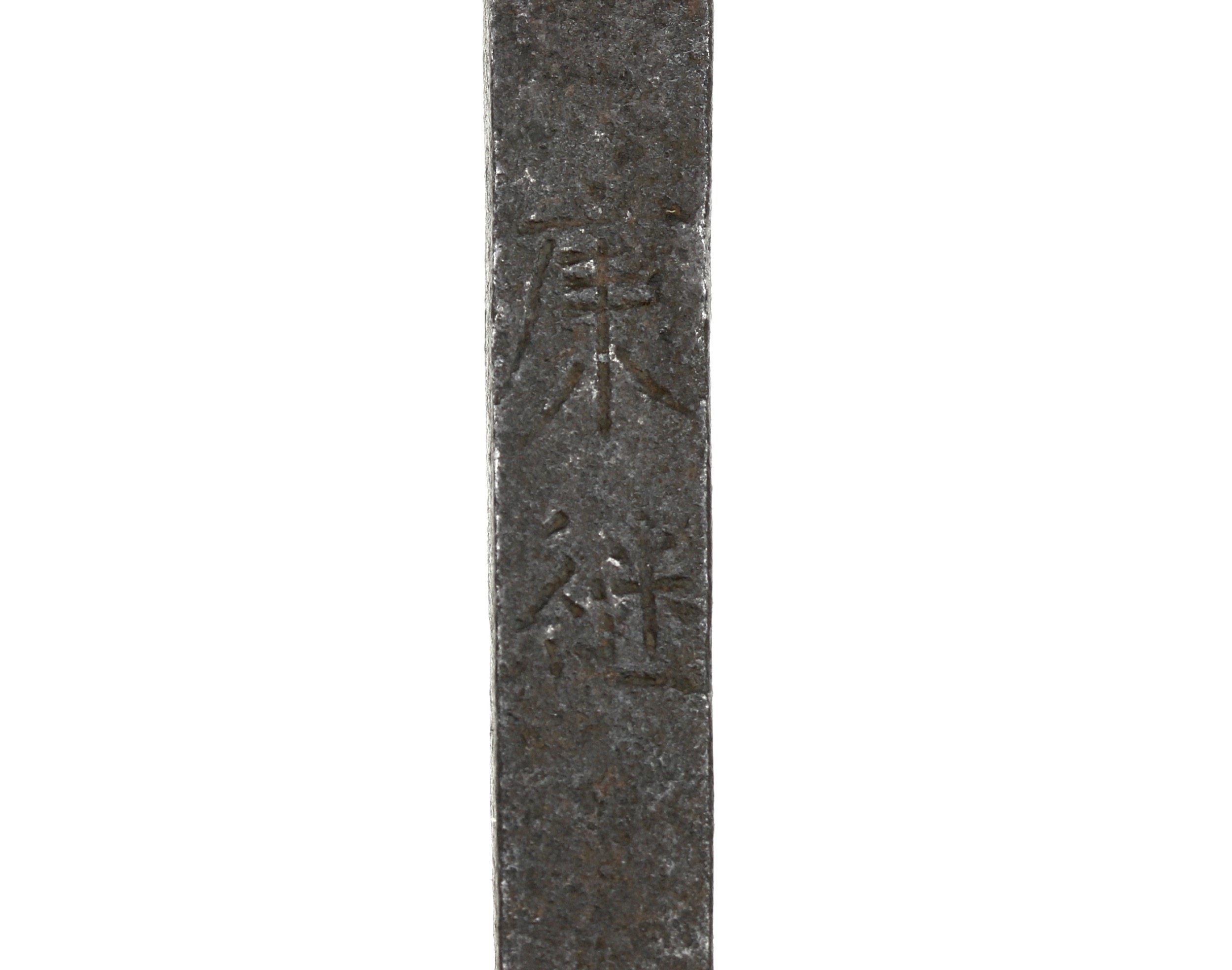 Among Japanese antique arms, there is always the chance of a piece being gimei, meaning having a "false signature". Many such false signatures are added in recent times to make the piece seem more important. It was also done historically, so some false signatures could actually be quite old. Few instances are known of false signatures on polearm blades, and most seem to appear on swords. On this particular piece, no red flags stand out that make me think it might be gimei. 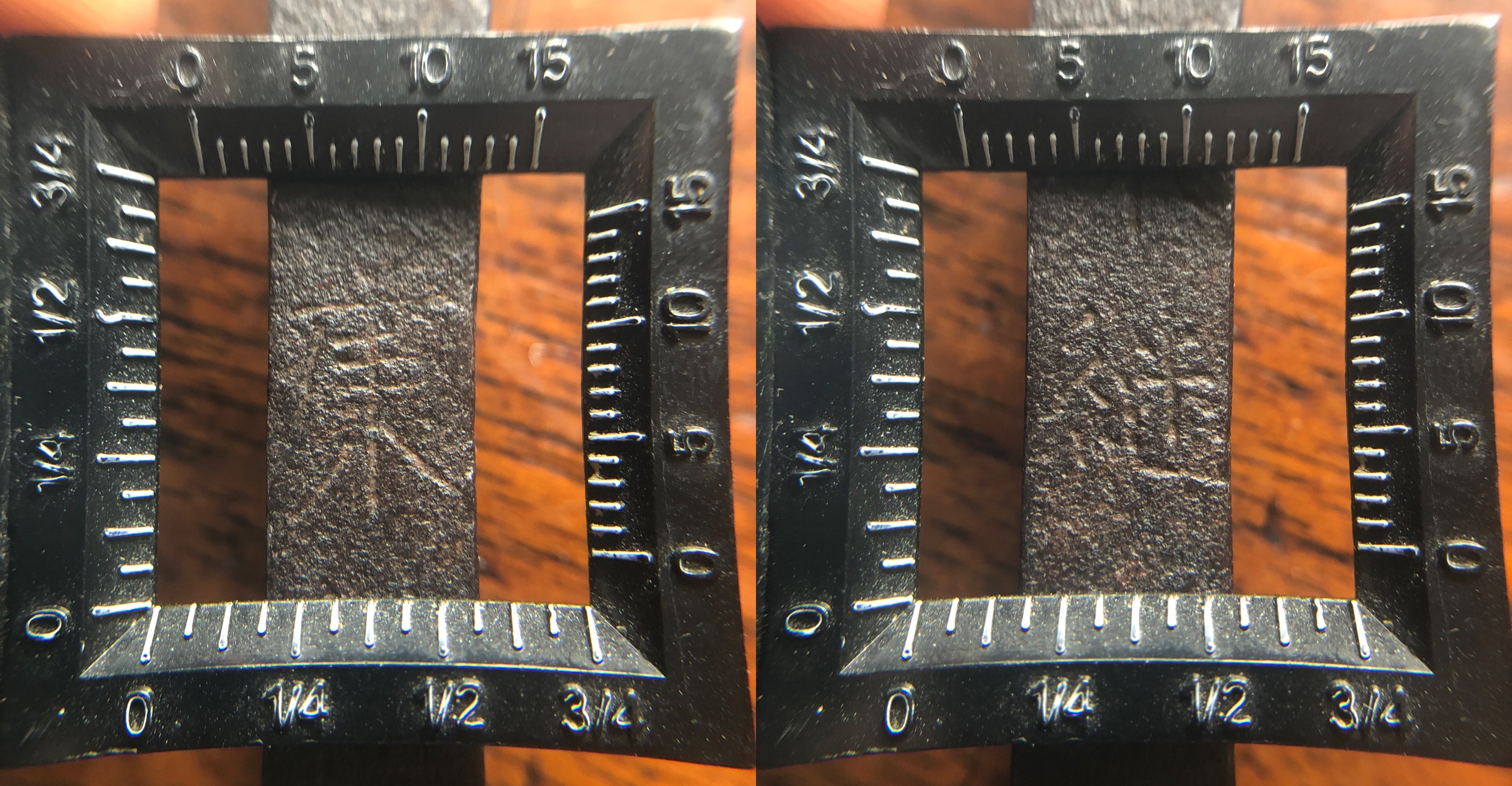 Close inspection of the signature indicates it is old and likely as old as the tang. There is no depression in the tang where a different signature has been removed, and the patina is the same inside and outside the carvings so it is certainly "of the period".

The piece comes with a so-called shirasaya consisting of a scabbard (saya) and a short shaft for mounting and storage. The saya is inscribed on both sides. Such writing on Japanese storage scabbards is called sayagaki and was usually done for inventory identification purposes.

In this case, the sayagaki is quite interesting. 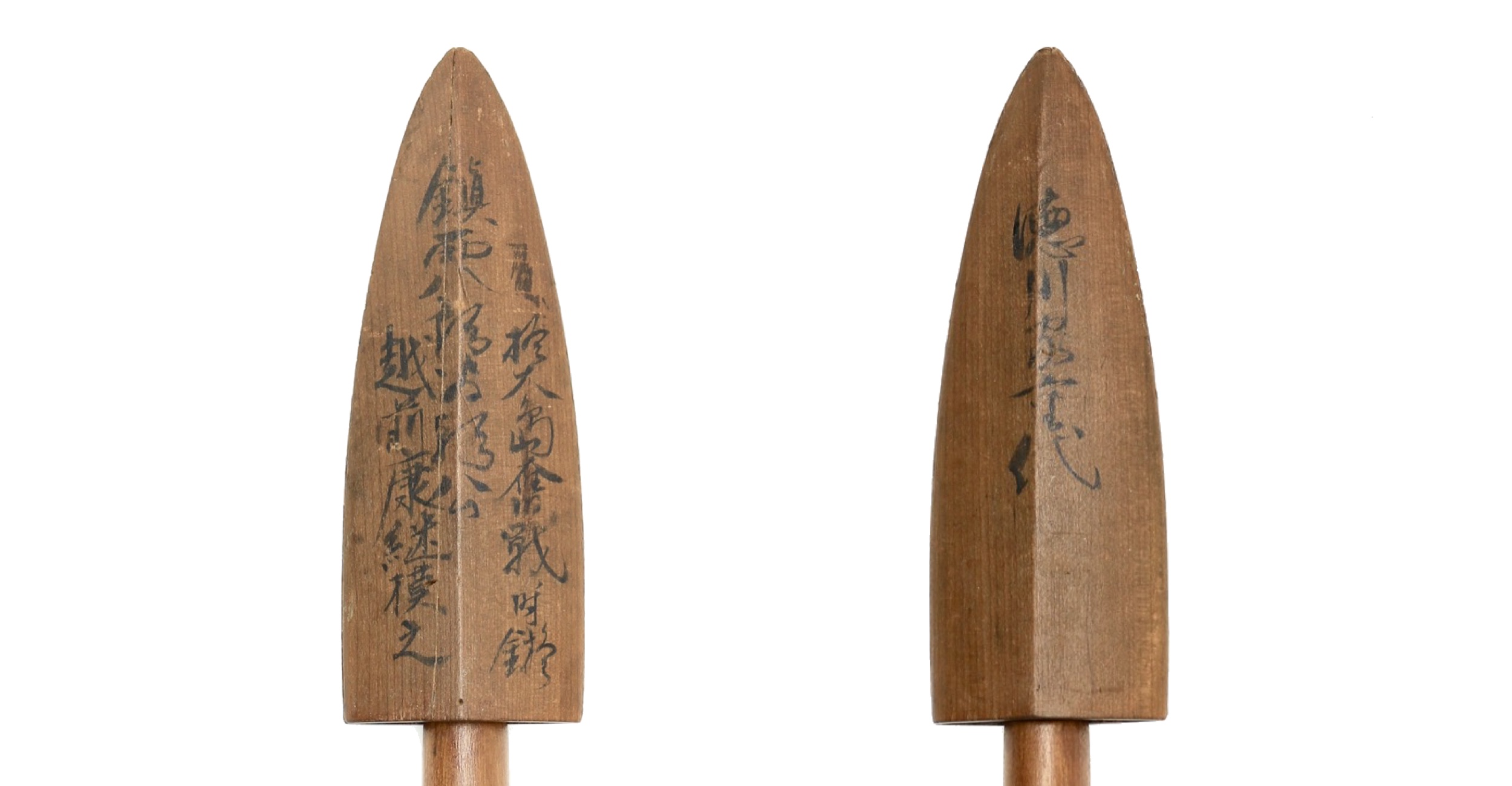 which was later remounted as a yari."

The other side says:

"Heirloom of the Tokugawa family"

Such copies of important works were common, and especially the Yasutsugu line, with their close access to the imperial collection, were known to have made many. They were called utsushi. These replicas were made in part as a homage to a work that was held in great esteem, or as a project by the smith to challenge himself and learn the techniques of a past master. Some utsushi were used as presentation gifts.

In some cases the utsushi later became important references when the original artwork had gone lost.

Also known as Minamoto no Tametomo, was a samurai who famously fought in the Hōgen Rebellion of 1156. Has known as an unusually powerful archer, who according to legend managed to sink a ship with an arrow that hit the hull beneath the waterline. He was said to have had an unusual arm that was 4 inches longer than the other, which helped pull the bow further than most could.

He was eventually captured by the enemy, who severed the sinews in his arm, rendering him unable to use the bow anymore. Not long afterward he committed seppuku, suicide by slicing open the abdomen. He is the first samurai in the chronicles to have done this. 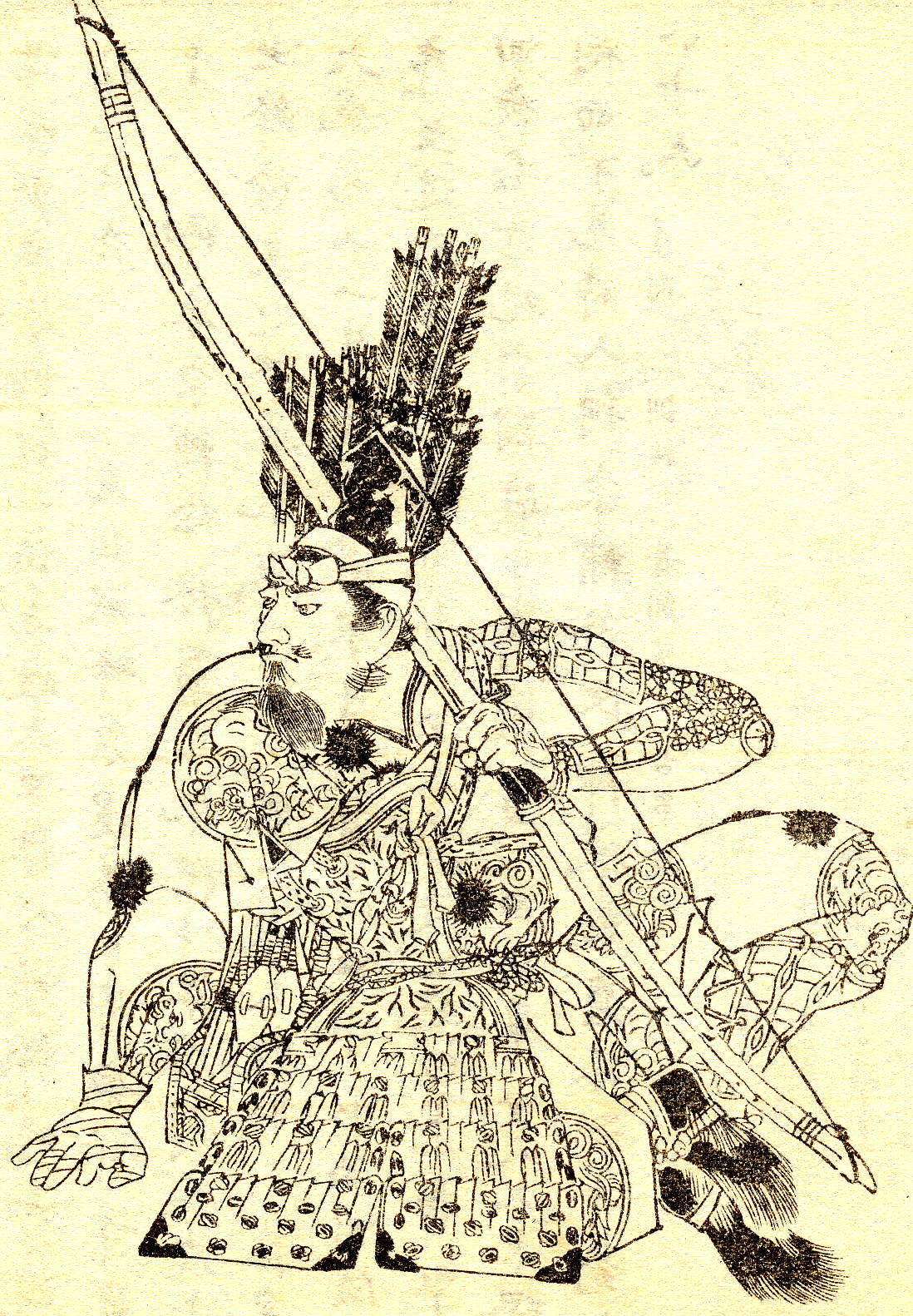 An interesting Japanese spearhead with sayagaki that suggests it was made as a copy of an old arrowhead that is attributed to a legendary samurai of the 12th century. Signed Yasutsugu, a line of smiths that worked for the Tokugawa family. 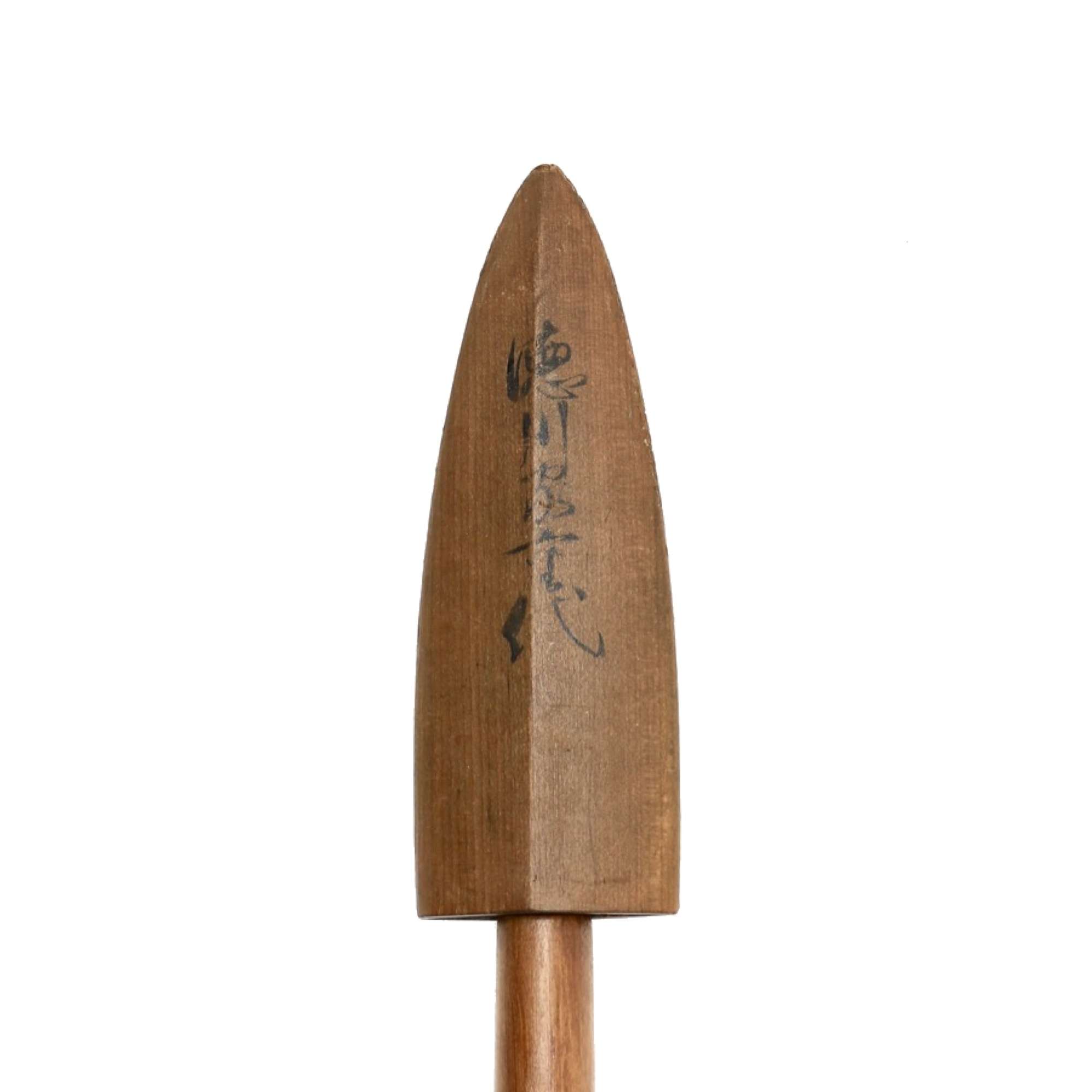 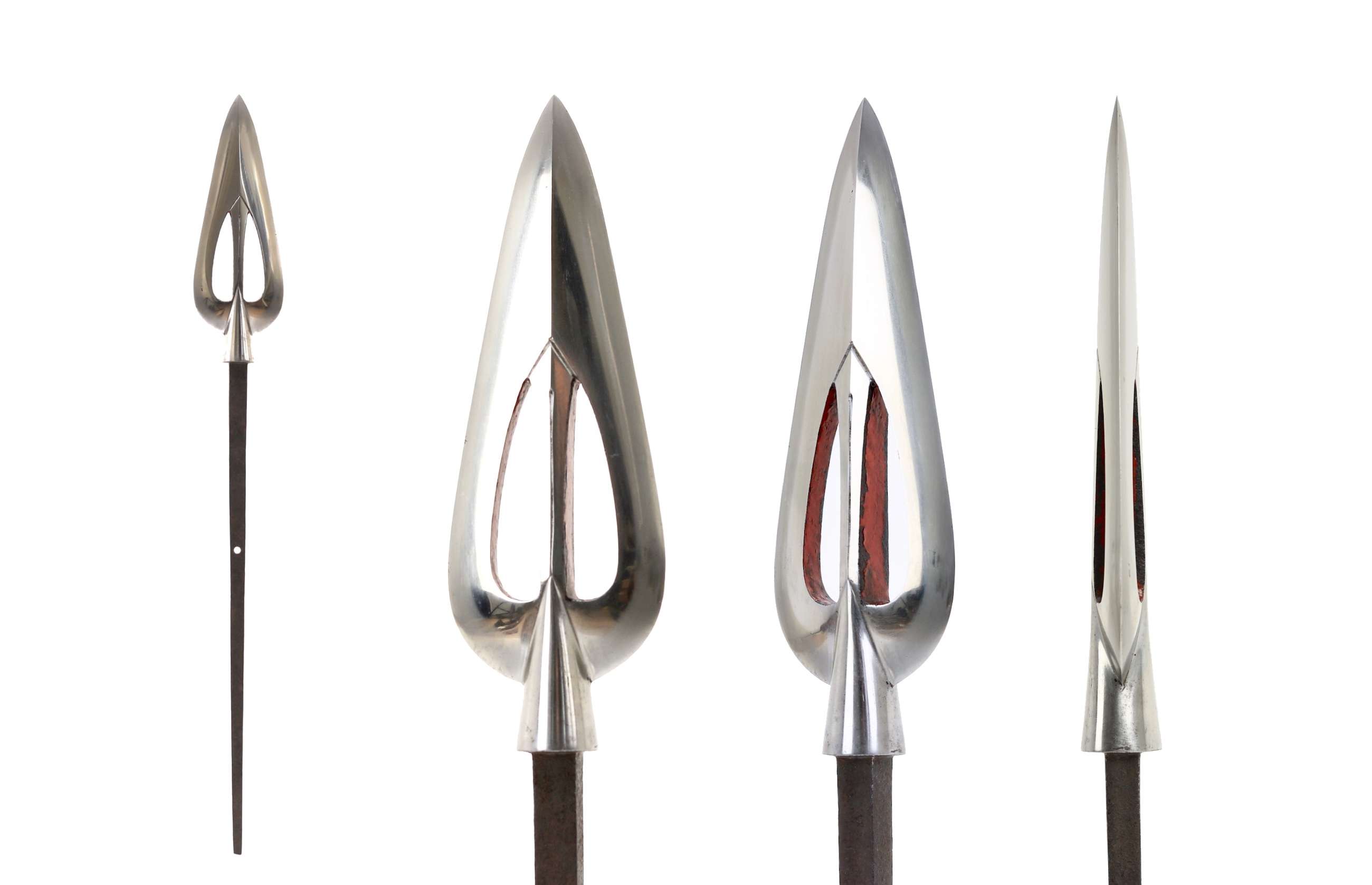 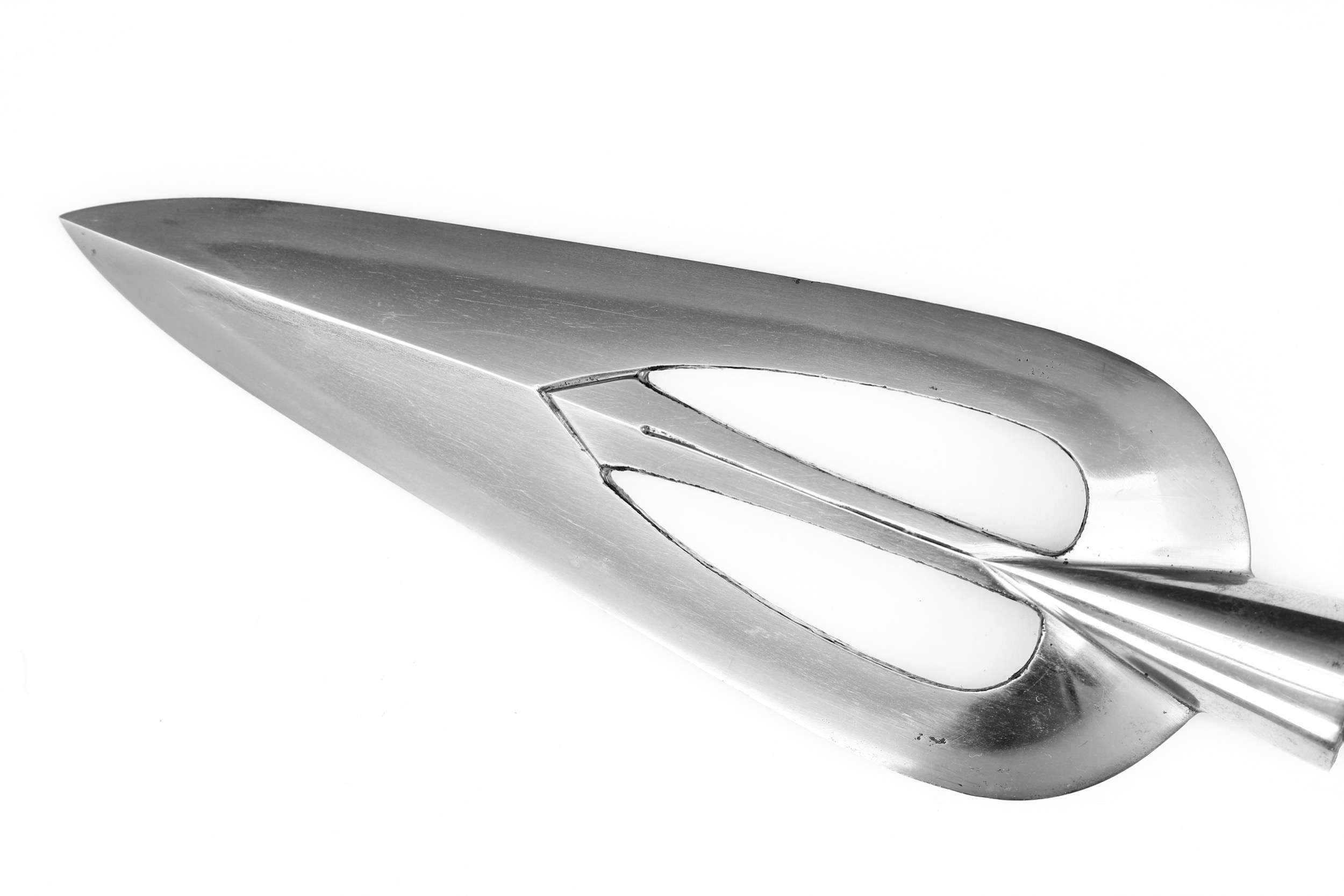