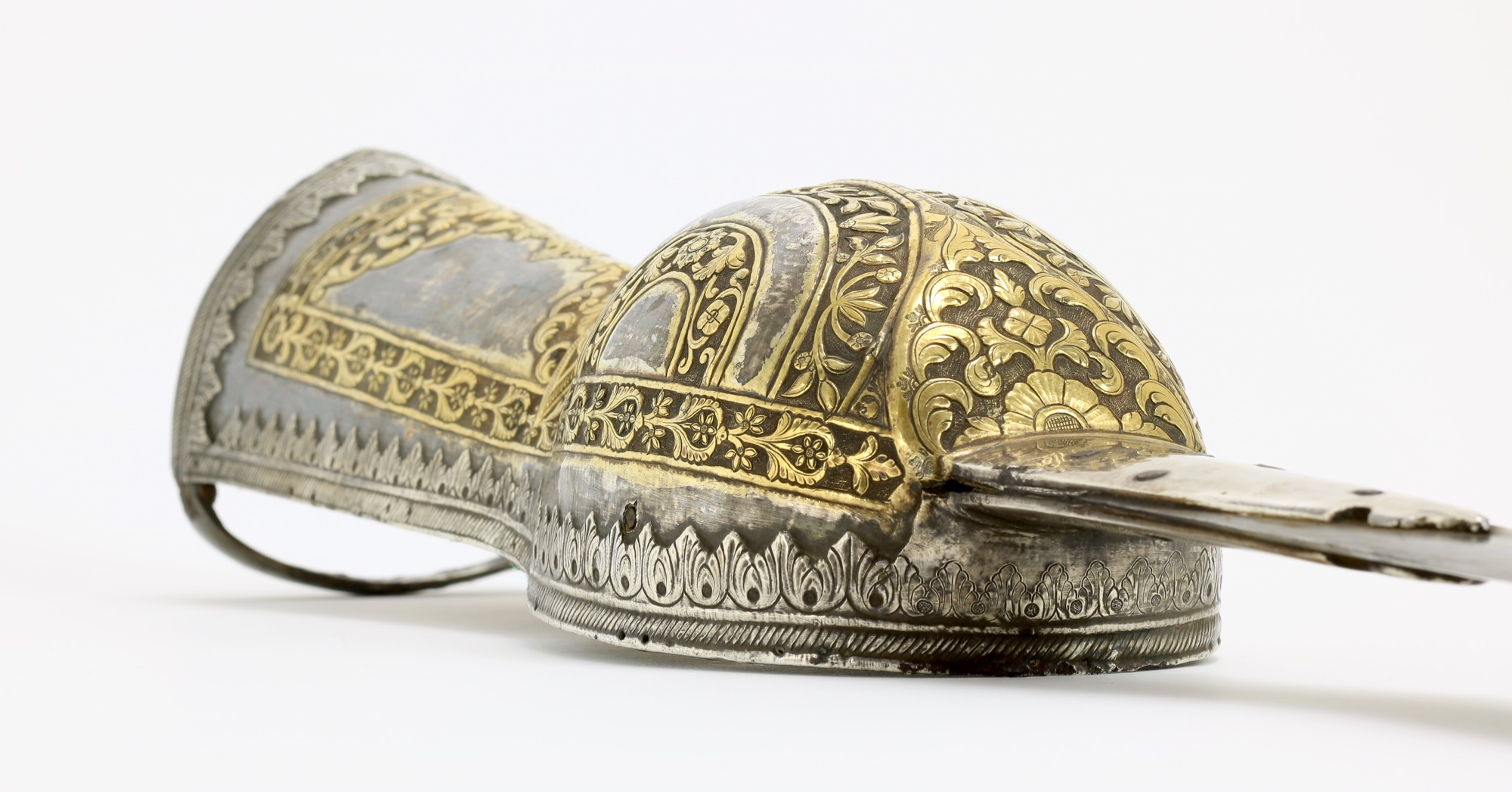 The Indian word pata literally means "a long broad leaf". In English the weapon is mostly described as a "gauntlet sword". It is strongly associated with the Maratha who call it dandpatta. The Maratha empire (1674-1818) rose to prominence in the 17th century and defeated the long established Mughal empire. The pata seems to be a further development from the 16th century Vijayanagara hooded katar. One branch of this evolution lost the hood, got shorter and became the dagger known as katar, which was to become one of the most popular edged weapons of India. The pata seems to be another evolutionary branch in this same tree, becoming longer, and its hood started to enclose the whole wrist.

Pata are typically quite large, often with long, springy with imported European blades. They were used both on foot with a shield and from horseback. Cavalry use was probably confined to downward slashing alone, as a thrust would put too great a shock on the wielder's shoulder. This is perhaps also why they are relatively flexible, as to reduce the burden on the shoulder with an accidental entrapment of the tip.

A fine example of an Indian pata. The long blade is forge folded and differentially heat-treated. There is prominent layering at the base and shading in the steel that indicates it was annealed to make it tougher, while most of the sword is through hardened to make it springy, creating a greyish structure with martensite crystals throughout the length that somewhat obscure the fine pattern. (The same effect can be seen in the greyish hamon temperline in Japanese swords.) The blade has a single shallow groove, with four holes at the base that were plugged with silver studs.

Don't be fooled by the ornate looking handle: It is made of a thick steel plate base, and is fully functional as armor. The steel plating is covered with another thick layer of silver of high purity, as indicated by the blueish tarnish here and there. The handle was then chiseled and very finely engraved with bands of flower motifs, and areas were parcel gilt. It retains its original orange silk-velvet lining with green bordering.

The decoration of them is usually typically south Indian / Hindu. This particular piece is decorated in a style that reminds strongly of silverwork from Kutch, western India. However, Kutch work usually leaves no open spaces while the layout of the decor, with plain areas between the decorated bands, is somewhat less typical for Kutch work. In any case, it's the only pata known to me that is decorated in this manner. Judging from the style of work the piece seems to date from the 19th century. While many 19th century pata seem to be demonstration pieces sometimes with flimsy brass handles, this is a serious weapon with a very good blade and heavy plating.

Excellent condition throughout. Some of the usual and minor age related scratches. Inside fabric lining in near-perfect condition. No major issues, no repairs. Everything is tight. See photos.

An unusually good Indian pata or "gauntlet sword" with a heavy steel gauntled plated in thick silver, with elaborate chiseling and engraving, highlighter by parcel gilding. It has a very large, sharp, springy blade. Good pata are very hard to find on today's market. This piece, with a style decoration that refers to Kutch silverwork, is possibly unique.

Overall photos made before cleaning blade. See other pics for current condition.