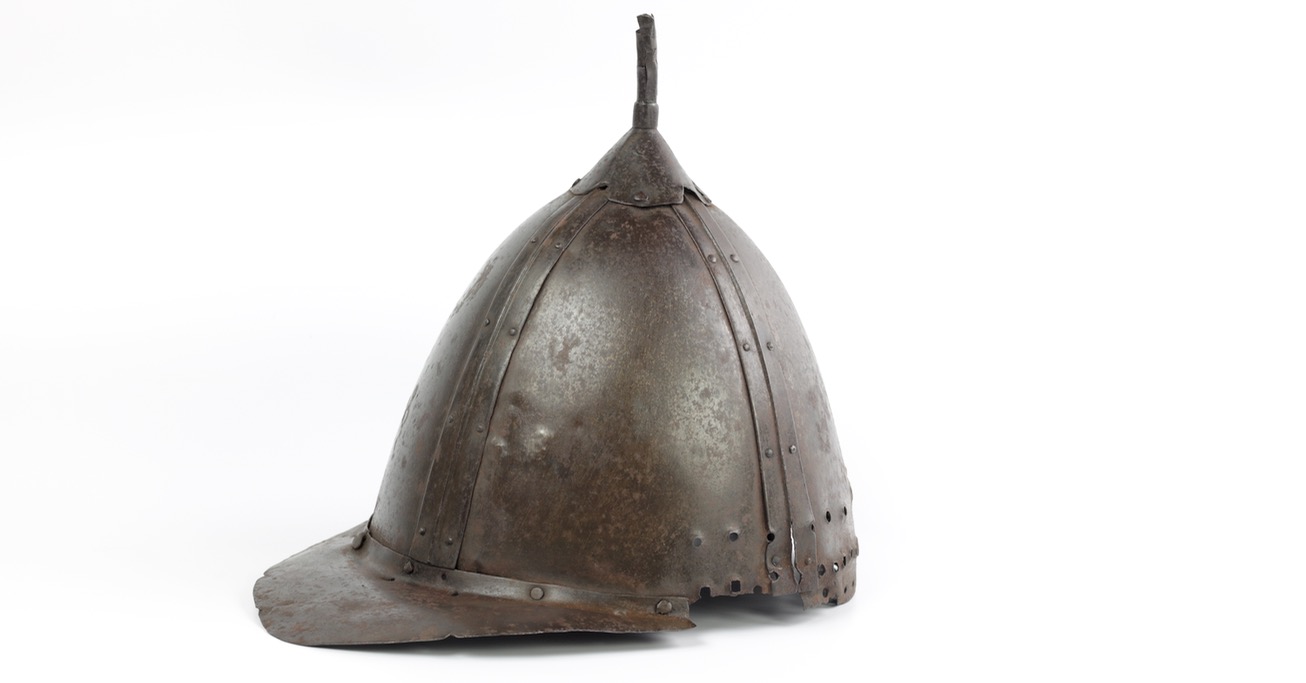 This item has been sold.
Read full article
Overall height

Measured back to front

Measured back to front including visor

An early type of Korean soldier's helmet. Its dome is made out of four pieces, joined together by means of riveting them over four sheets that overlap the seams. The sheets are ribbed for extra strength. On top is a small conical peak that holds a plume holder. Its most characteristic feature is the elongated visor, comprising of a single piece of steel that projects forward. The long visor probably protected the face from harm coming from above, such as things thrown down besieging a wall, or longer range volleys of arrows. The visor is hollow for added rigidity. Stylistically the helmet is an in-between phase between the early Korean helmets with a full brim and later examples with a shorter visor, after the Mongolian / Jin models.

Quality and finish suggest it is a strictly utilitarian helmet, probably worn by a soldier. It is in decent condition for its age, with no recent repairs save for a small number of rivets that seem of a later date but are patinated to blend in well. There are some losses to the underside of the dome, mainly near the ears. The helmet's underside has a great number of holes to which the protective neck flaps were attached.

There is a helmet with comparable forward projecting visor and ribbed plates attributed to prominent scholar-official Ryu Seong-ryong and said to have been worn by him during the Imjin wars. It has been displayed at The National Folk Museum of Korea.1 The helmet attributed to Ryu Seng-ryong in the National Folk Museum of Korea. Note the ribbed sections on each seam, like on our example.

There is also a 17th century handscroll depicting the Imjin wars on which various helmets are depicted, among which several figures wearing a helmet quite similar to this one: A rare early style of Korean soldier's helmet with elongated visor. It is of a type that was used during the Imjin wars of the late 16th century and was possibly preserved as a war trophy from this event.

Notes to description
1. This helmet is featured in an online article of the Korea Herald. (The dark areas are oil I used on the outside that seeped through the seams.)