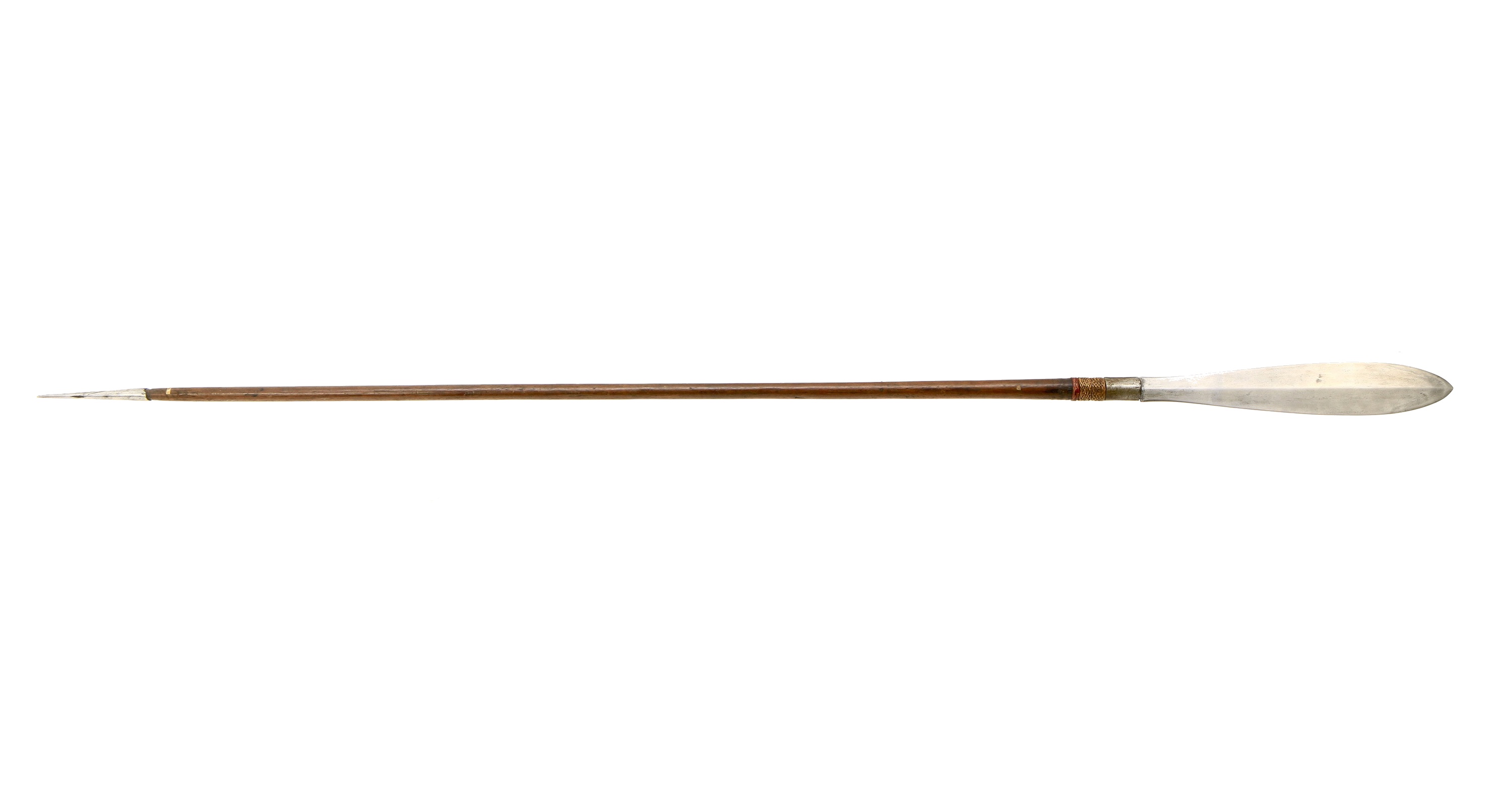 Purchased from a source in the UK

The Igorot are a group of ethnicities that inhabit the northern part of the island of Luzon, the Philippines. Their weapons were a war axe and javelins. The latter were used for both warfare and hunting, their use was trained from a young age onwards:

"The boys are constantly throwing reed spears, and they are fairly expert spearmen several years before they have a steel-bladed spear of their own. Frequently they roll the spherical grape fruit and throw their reeds at the fruit as it passes."1

Igorot warfare was ritualized but that did not make it any less bloody. Two groups of men would face each other and when a foe fell, his head was taken as a trophy. Jenks describing the Bontoc at war:

“Men go to war armed with a wooden shield, a steel battle ax and one to three steel or wooden spear. It is a man’s agility and skill in keeping his shield between himself and his enemy that preserves his life. Their battles are full of quick and incessant springing motion. There are sudden rushes and retreats. Sneaking flank movement to cut the enemy off.

The body is always in hand, always in motion. That it may respond instantly to every necessity. Spears are thrown with greatest accuracy and fatality up to thirty feet. And after the spears are discharged. The contest is continued is at arms length with the battle axe.” 2

A fine example of an Igorot spear of the fang kao, “barbless” type. Such spears are described as being primarily used for hunting hogs and carabao by most of the Igorot, except the village of Ambawan where they exclusively used this type of javelin for all purposes, including war.

Most of these heads were made by the Igorot of Baliwang, where in 1905 four smithies were still active. The smiths used simple tools, like stone hammers.3

It has a much larger than usual blade, which is very well made with a high carbon edge plate projecting from milder steel at the tip, and signs of differential heat treatment. Only the leading edge is sharp, and the tang is only small, both indicative of a weapon that is made solely for the purpose of throwing.

The head sits on a long, tapering hard wooden staff with rattan reinforcements around the tang. At the back is a narrow iron spike by which they planted the spears in the ground when not in use.

The label is an old collection label of the Hawaii-based photographer and ethnographer Christian Jacob Hedemann. He was a collector and curator of the collection of the Honolulu Academy of Arts and donated a lot of pieces to this collection. Part of the collection got sold off in the later 20th century, among which undoubtedly this javelin. He wrote a catalog in 1928, which was very rare to find, but I tracked it down. It lists 431 items "donated to the Academy of Arts by Mr. C.J. Hedemann and his wife and children".

Under the entry for number 182, we find:

And indeed, there it is in one of the photos: 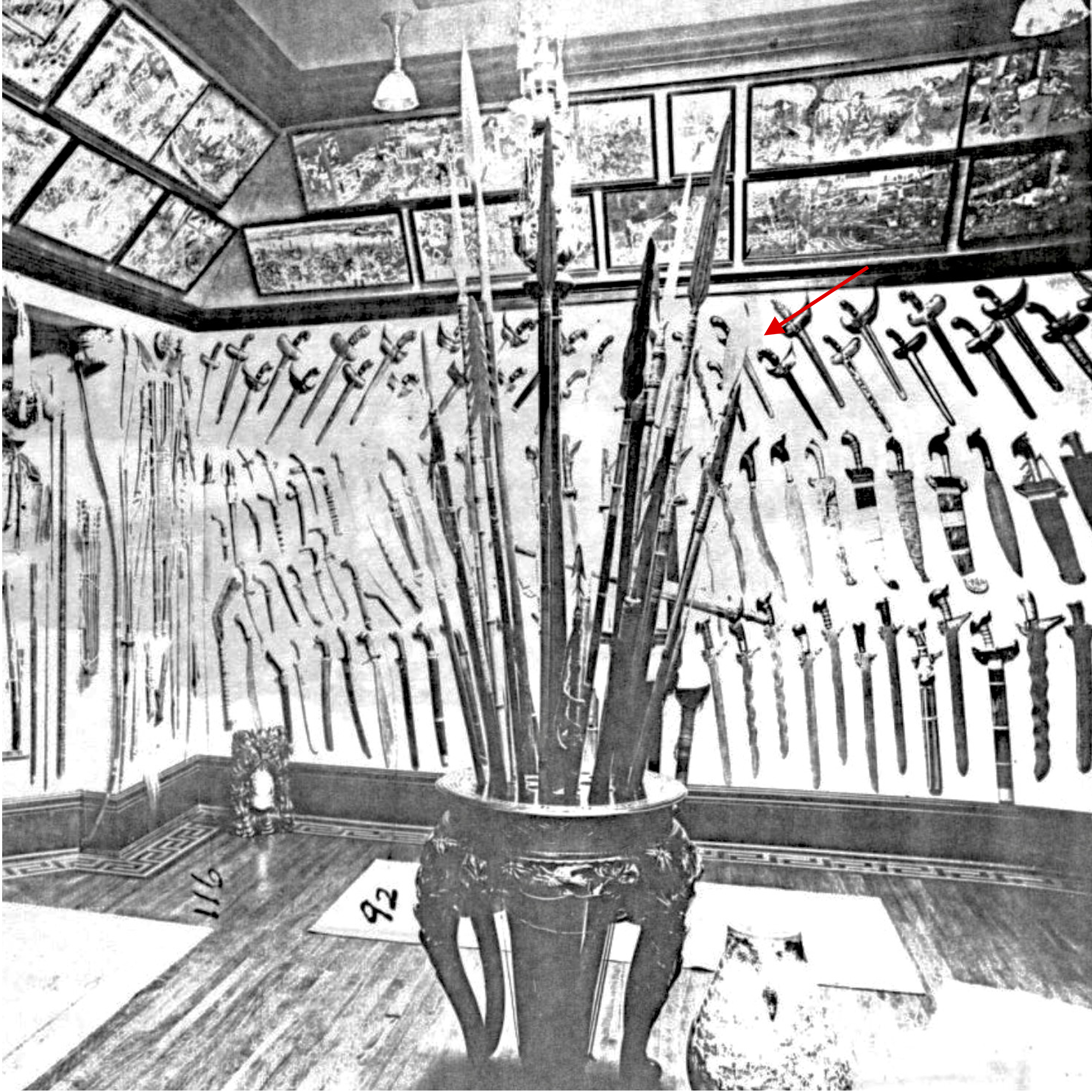 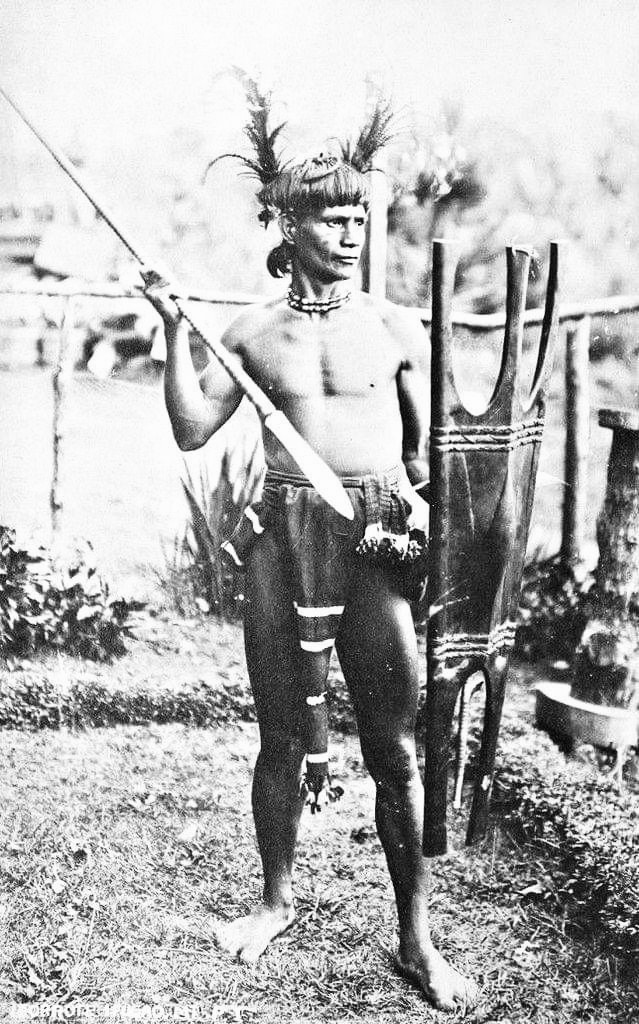 An Igorot warrior with his shield and fang-kao.
Unknown date and photographer. 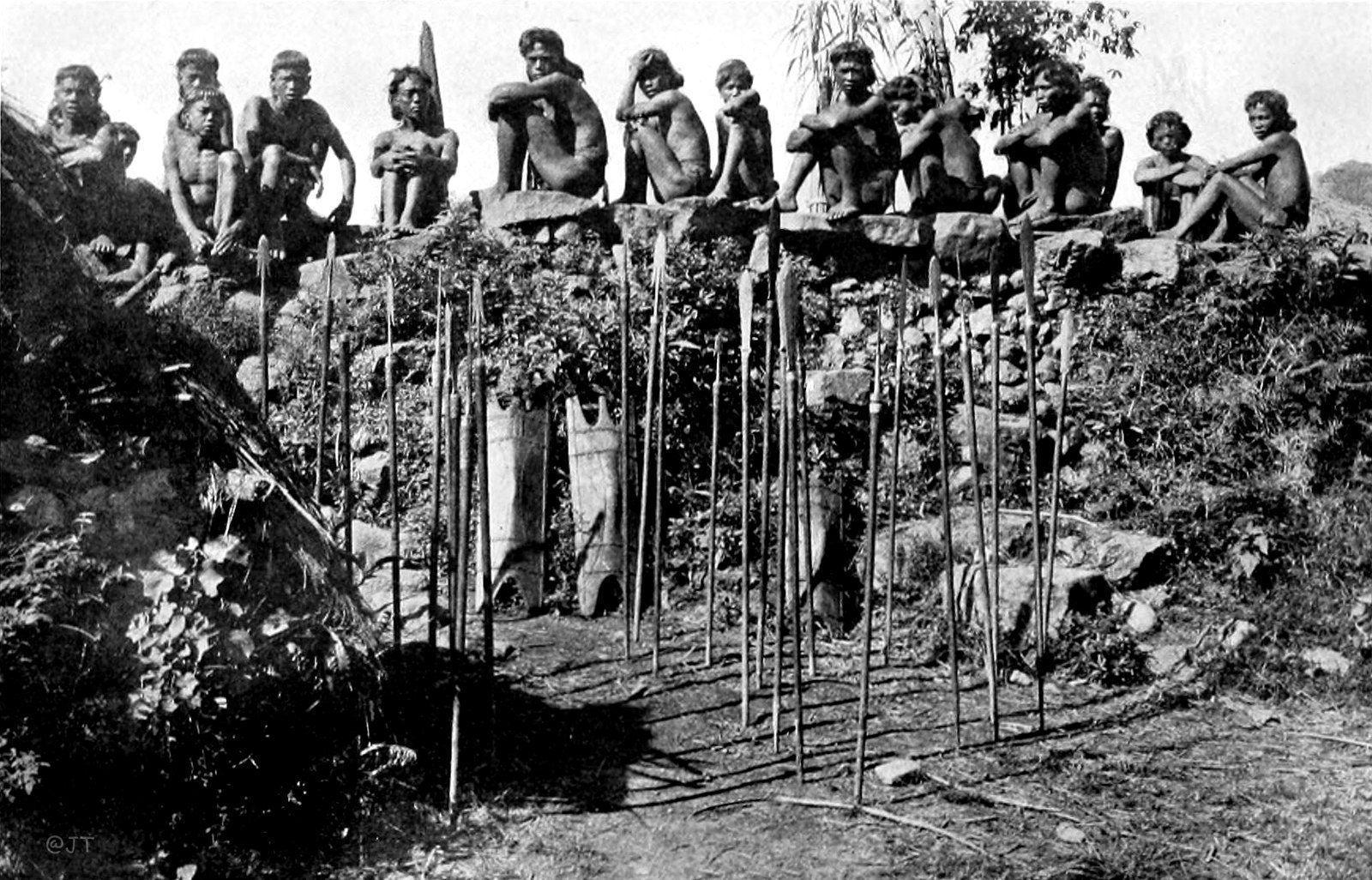 "These men were expecting to be attacked at the time this photograph was taken." 2 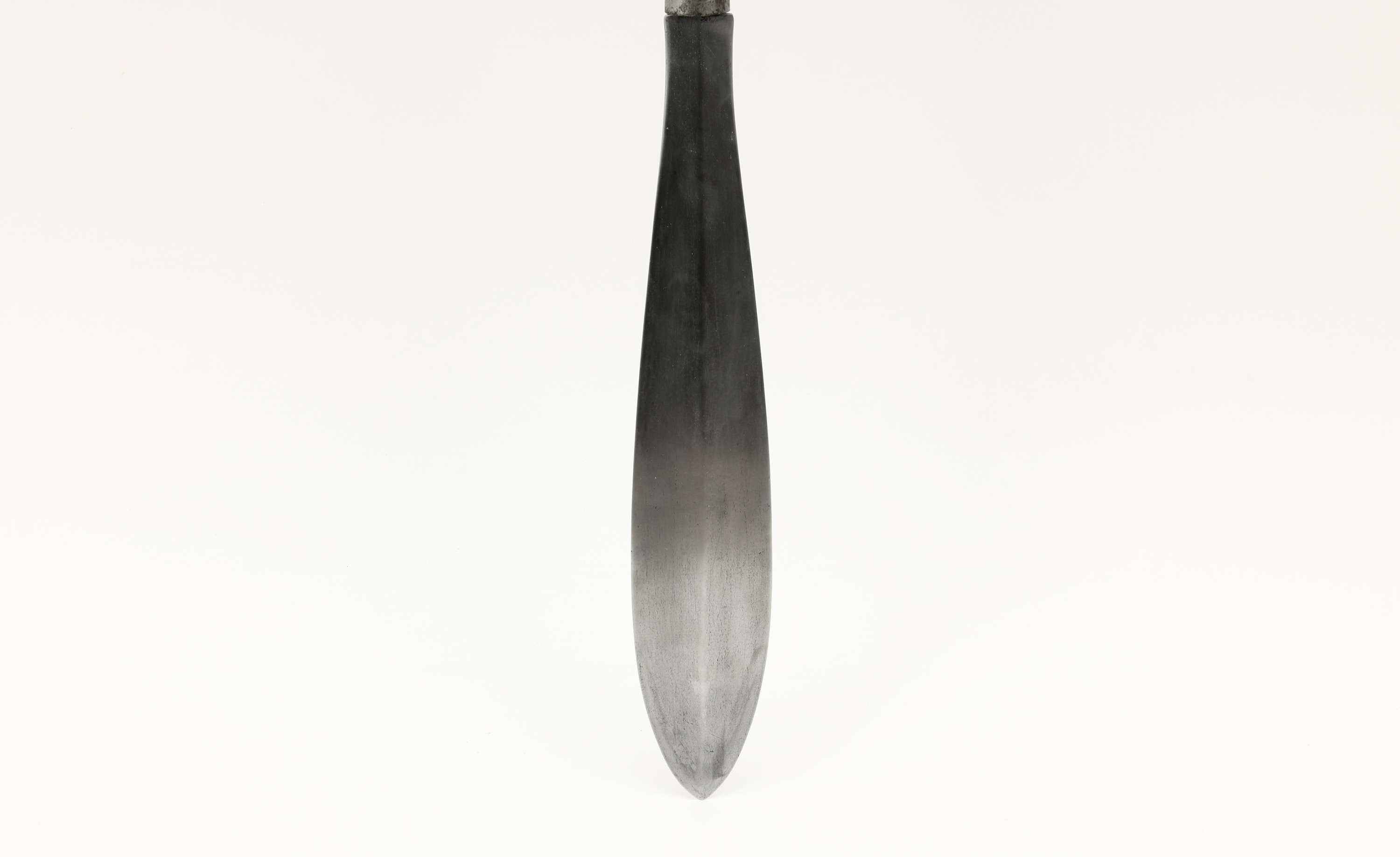 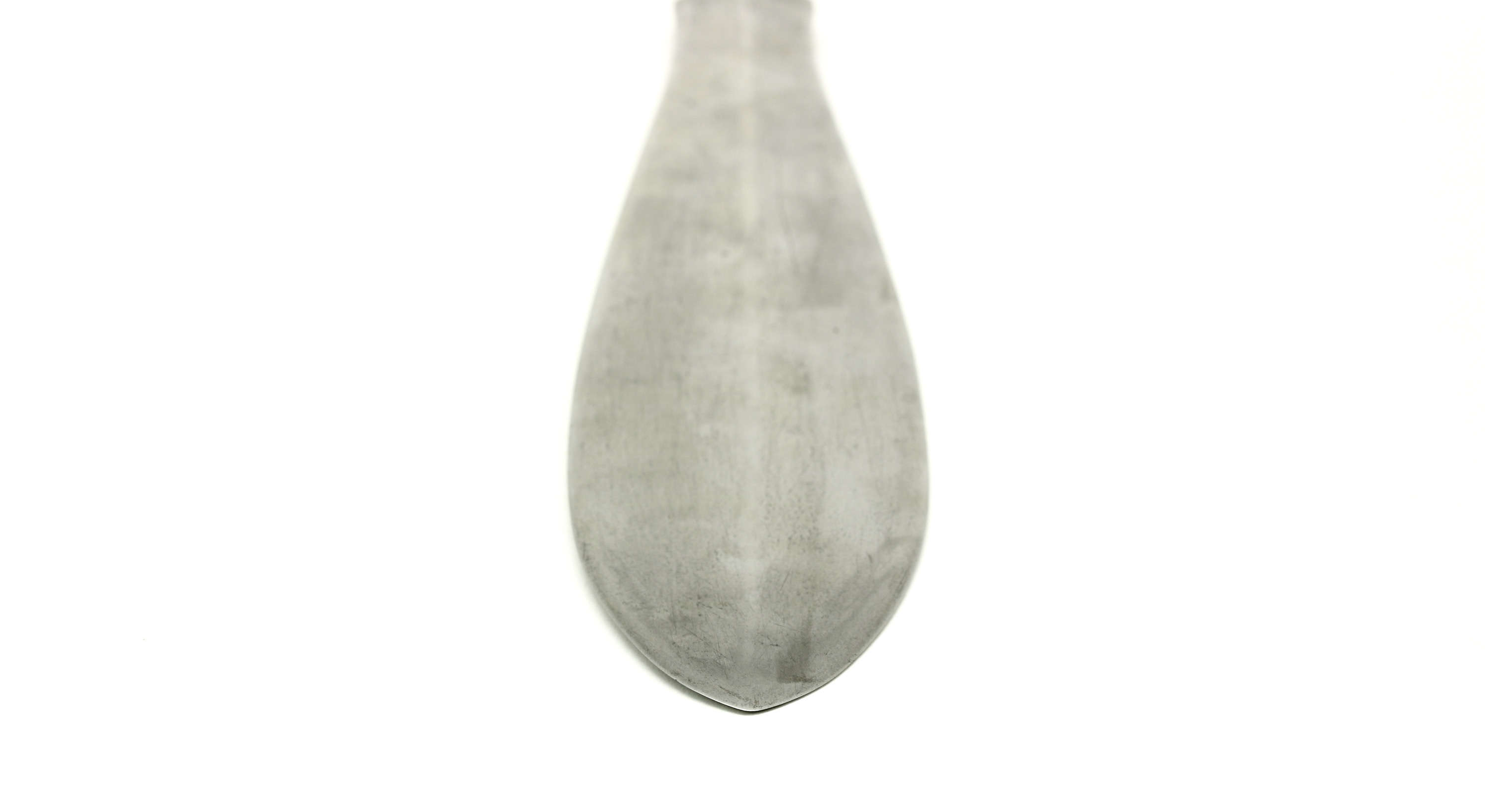 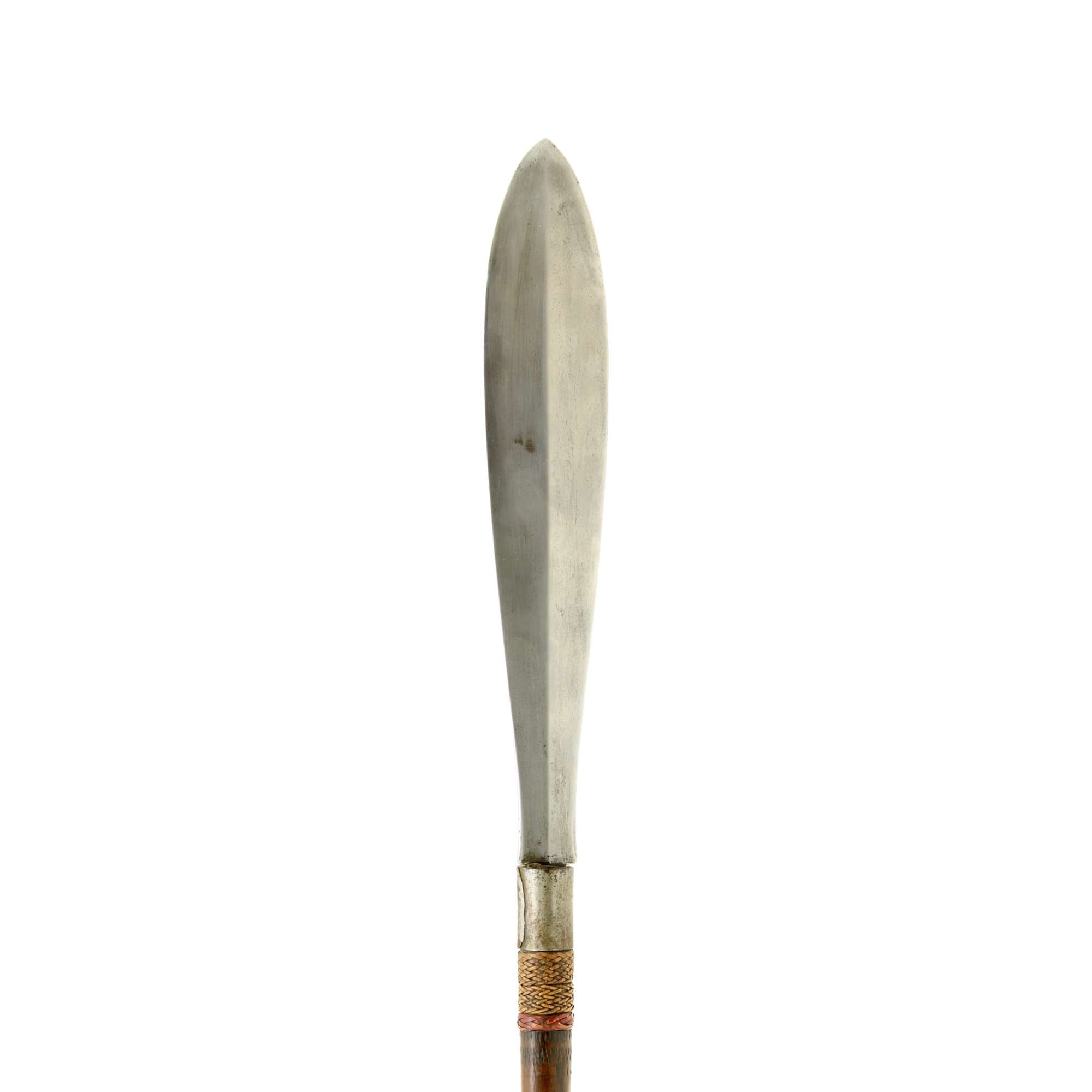