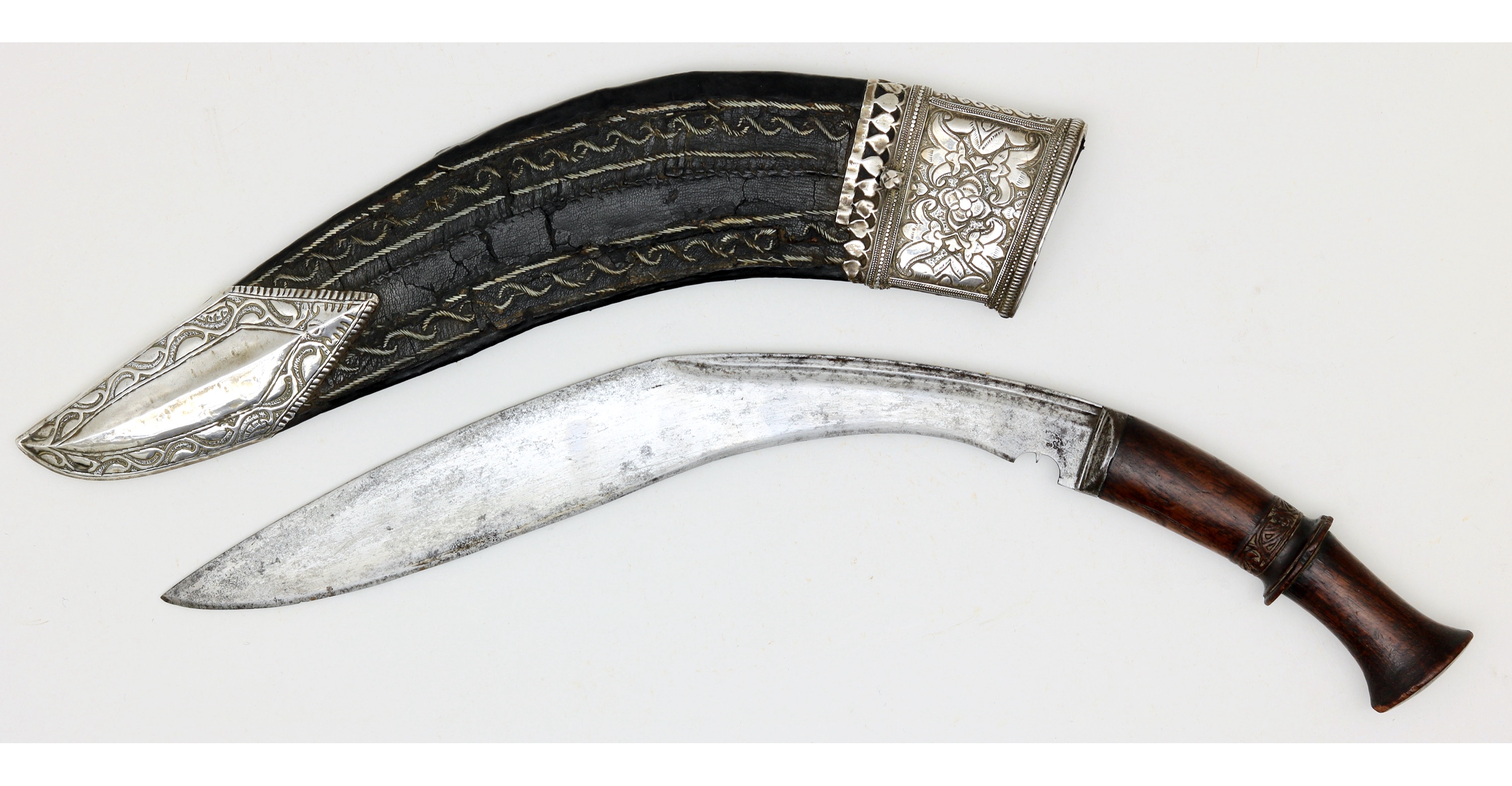 Narrowest at base 26 mm

The hanshee khukurī or simply hanshee is an early type of khukurī that is characterized by having a long hilt and a rather long and relatively narrow blade. The word hanshee, now in common use in the English speaking collector world, derives off the Nepali word hamsiyā (हँसिया) meaning "sickle".

Other than most types of khukurī which double as fighting and utility knife, the hanshee appears to be purely an offensive weapon. The type was mostly popular around the late 18th to early decades of the 19th century, and by now is one of the rarest and most sought-after forms of khukurī.

For more information on the type, see my glossary article: hanshee khukurī.

A typical example of an early 19th-century hanshee, with all the identifying features of that period: A long, slender blade with two grooves along the spine at the base, but no fullers in the main part. A wide and shallow notch (kauro), and an iron bolster that is quite narrow in profile, and the typical long wooden handle.

It comes in a scabbard covered with smooth black leather with quillwork ornamentation and silver chape and locket. The silver mounts are decorated in repousse work, the border of the chape is decorated with a meandering vine with leaves on alternating side. The locket is decorated with stylized flowers, and an openwork border of heart-shaped leaves.

There are other hanshees in private collections that also have very similar, left-oriented scabbards. One even with identical ornamentation, both the quillwork and the silverwork.

Decent condition for age. Blade in pretty good condition, with only superficial patination but no deep pitting. Scabbard leather at the back seems later than the front. Some losses to the quillwork, some denting to the silver mounts. Some losses to the locket. Wooden hilt with the usual wear and wear. Pockets on the back are lost.

A nice example of the rare and early hanshee khukurī of the early 19th century. The knife itself is a nice and solid piece that survived quite well, considering its about two centuries old. It comes in an unusual but not unprecedented silver mounted scabbard, with a left-hand orientation. 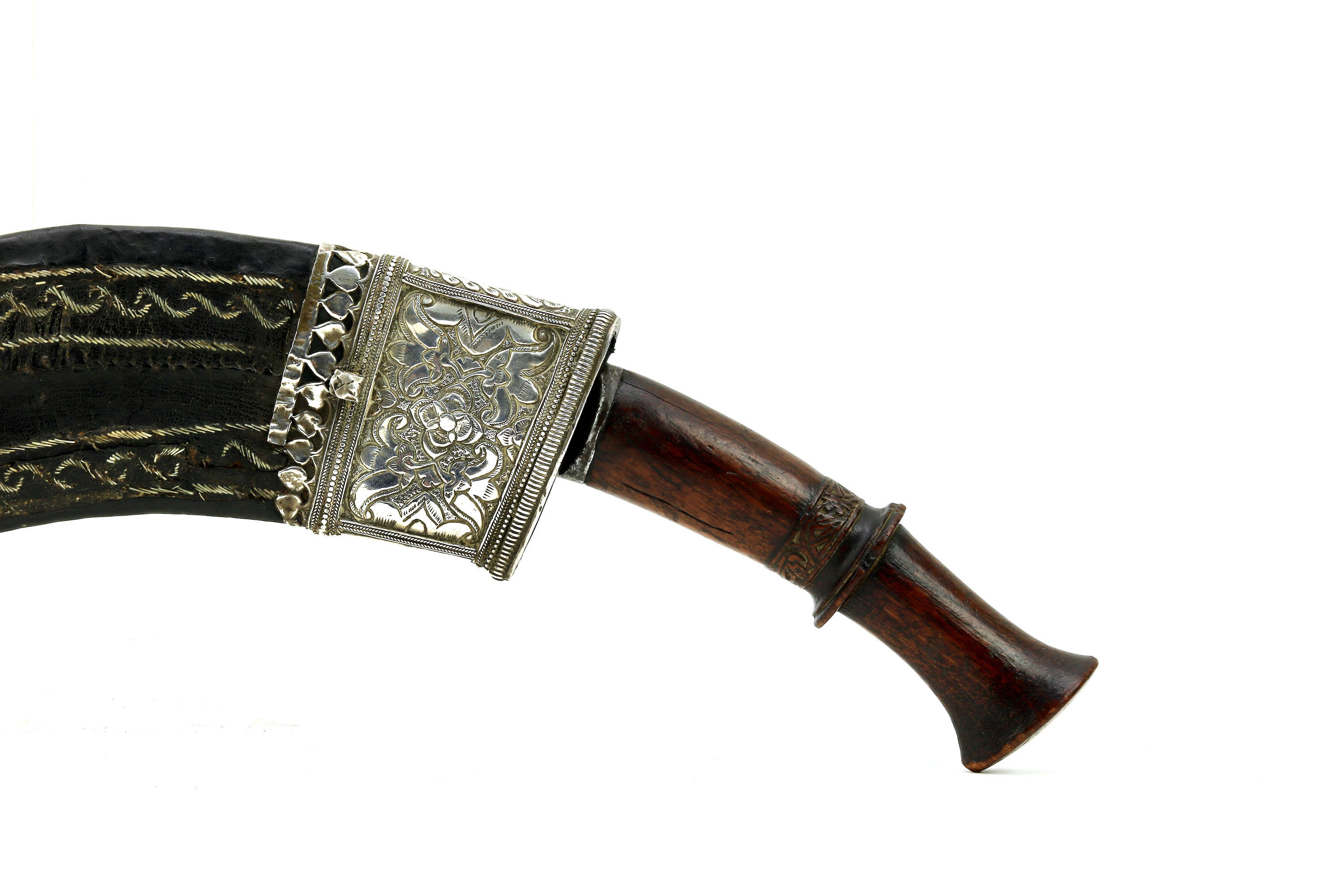 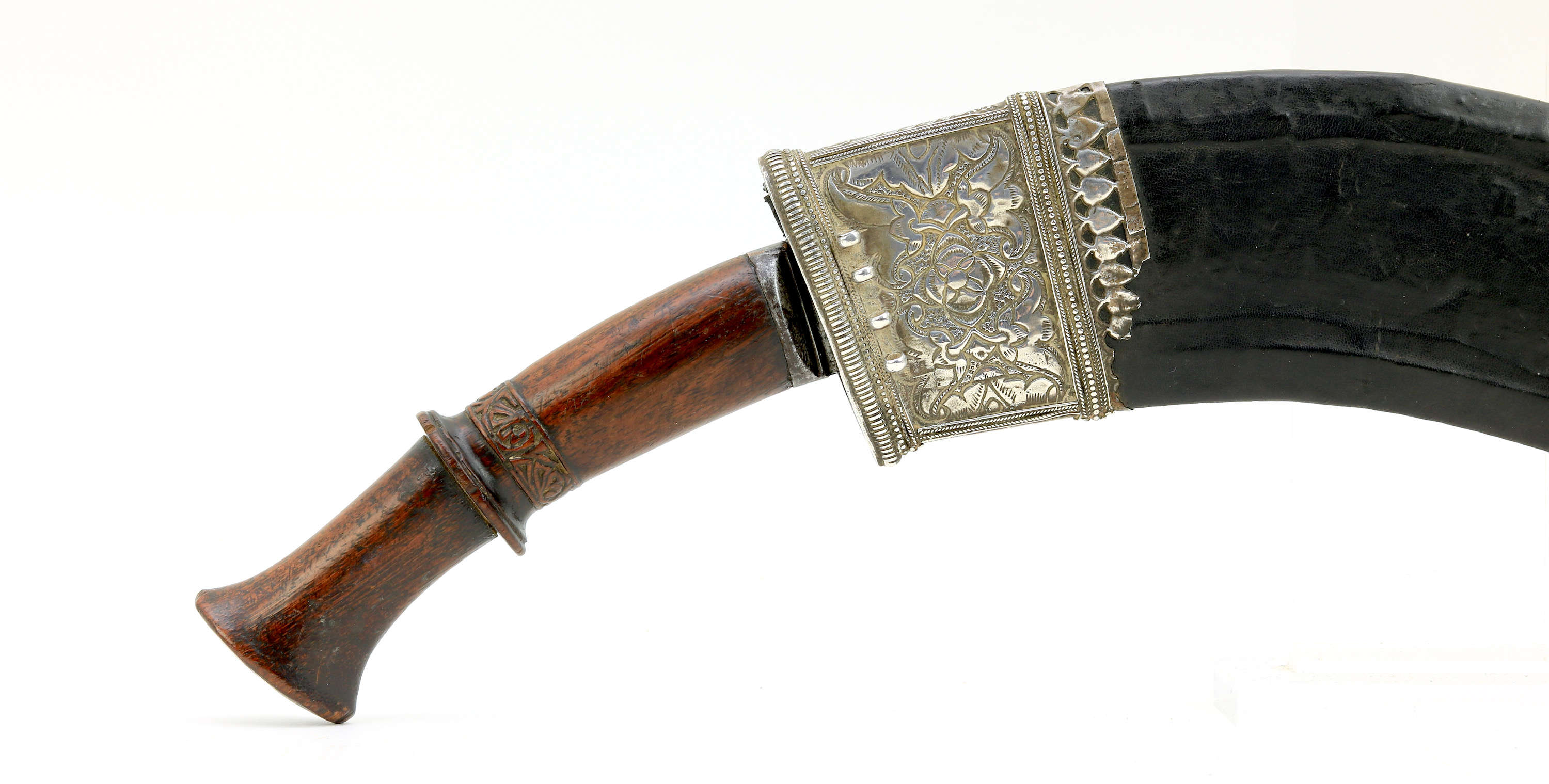 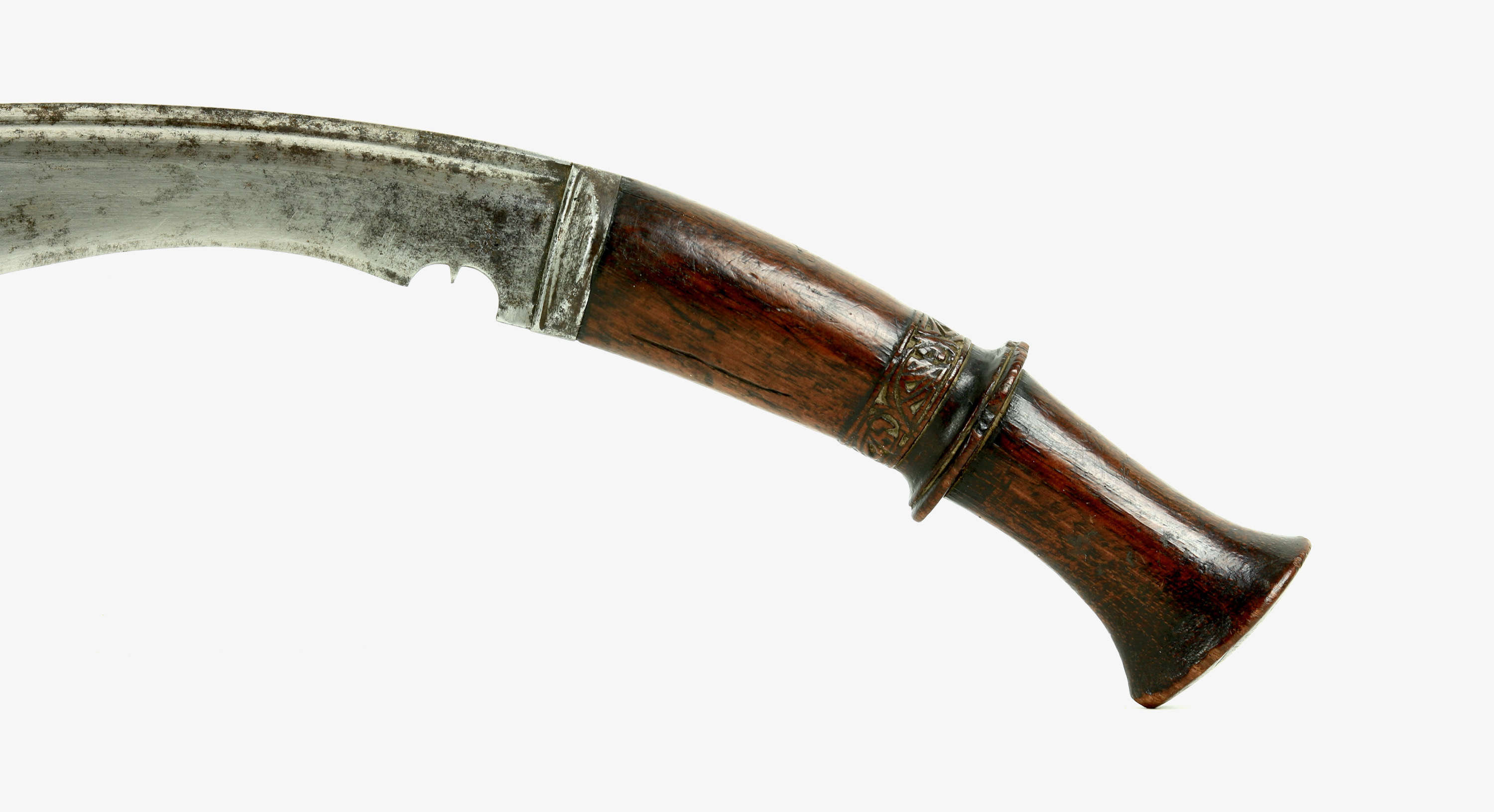 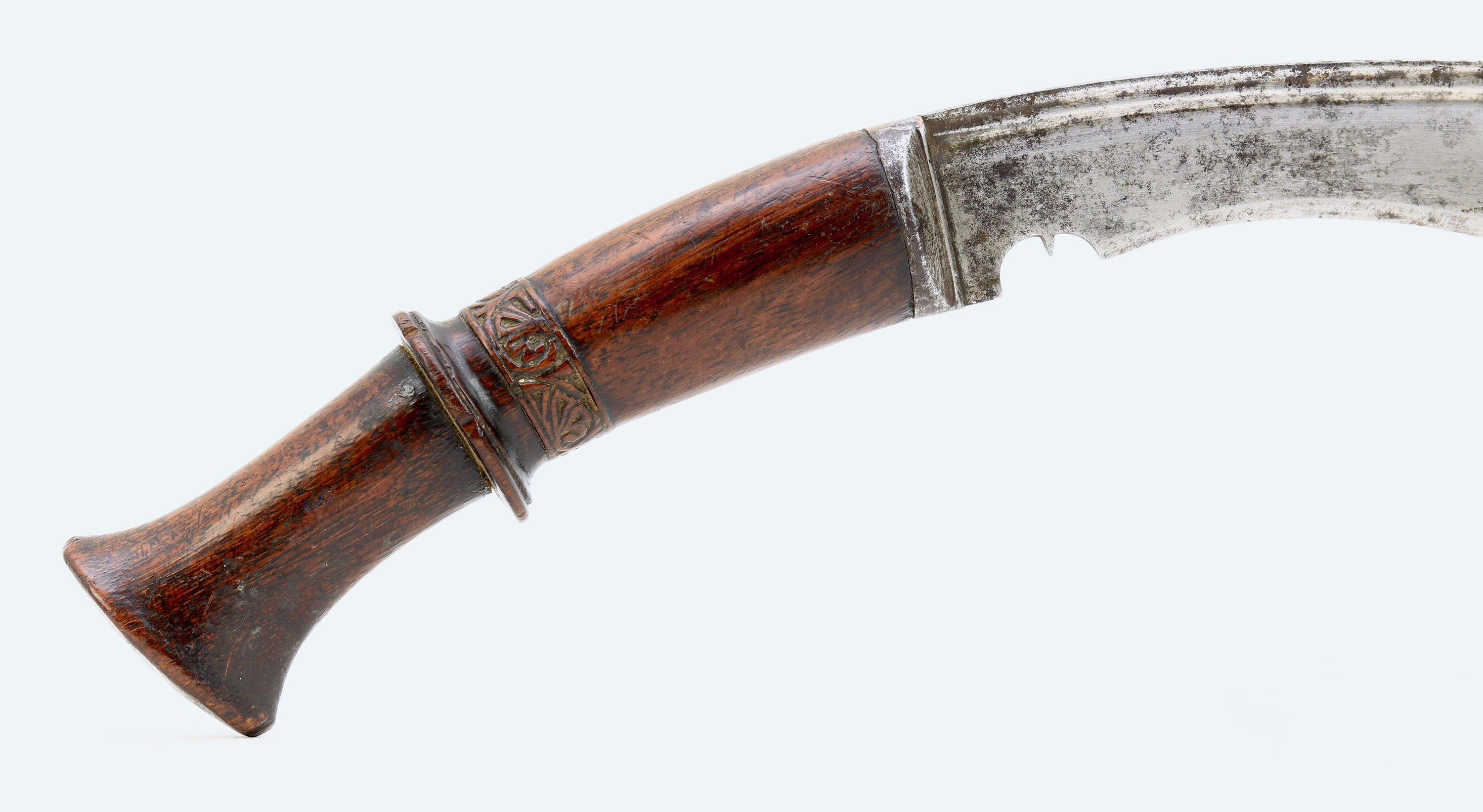