Group of arms from Tonkin 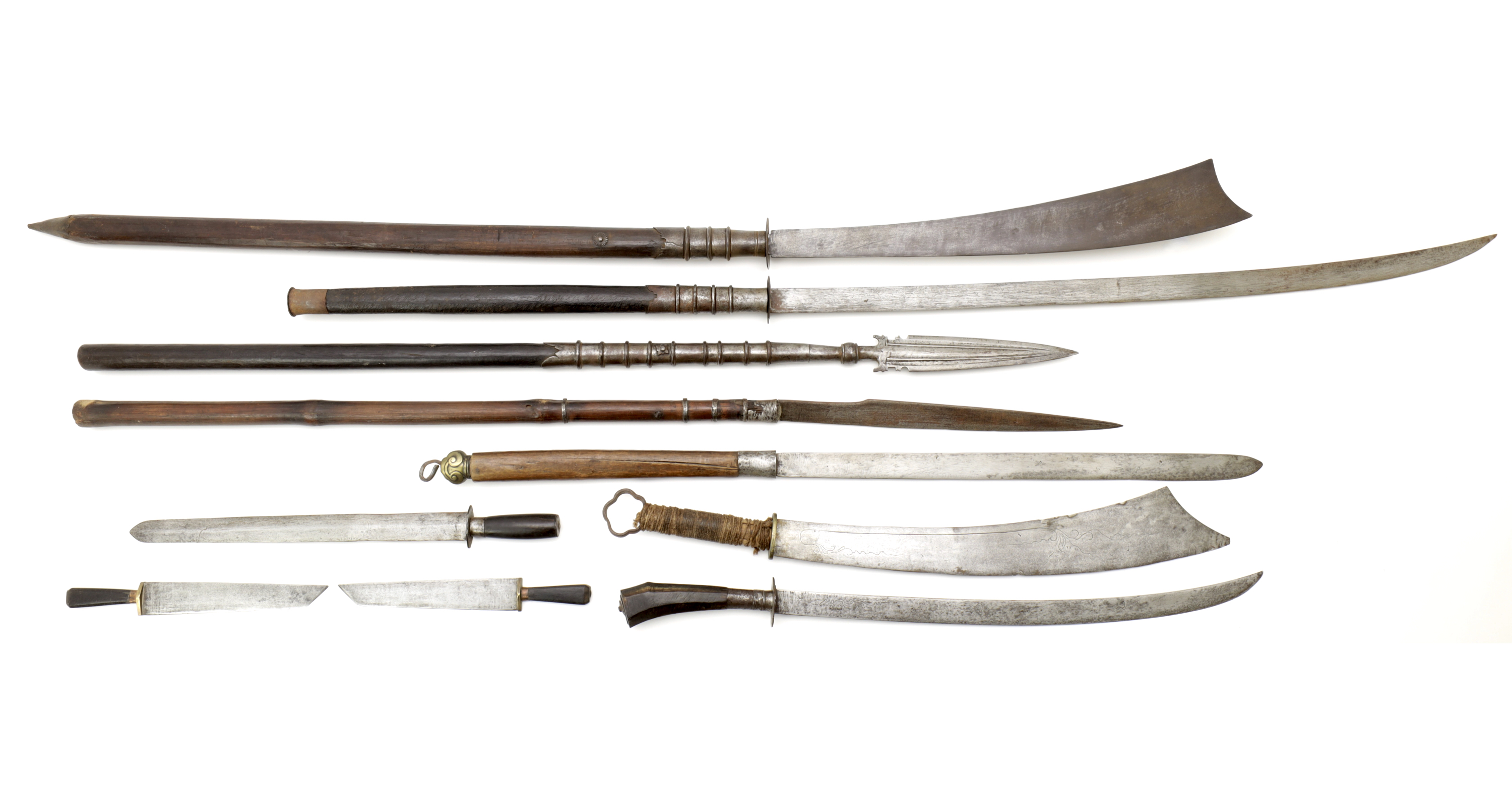 Between 1883 and 1886 the French tried to expand the territory they held in southern Vietnam and moved towards Tonkin in the north. The Vietnamese rulers got help from Chinese forces, most notably Liu Yongfu's Black Flag Army and the armies of Guangxi and Yunnan. The event is known as the Tonkin campaign. The campaign ended officially in 1886 when the region became a French protectorate under the Treaty of Huế, but unrest remained until 1896.

The following group of arms turned up at a French auction and was said to date from the Tonkin campaign. It was purchased by a European-based private collector, who then sold it to me. They originally came mounted on a red shield of questionable taste. 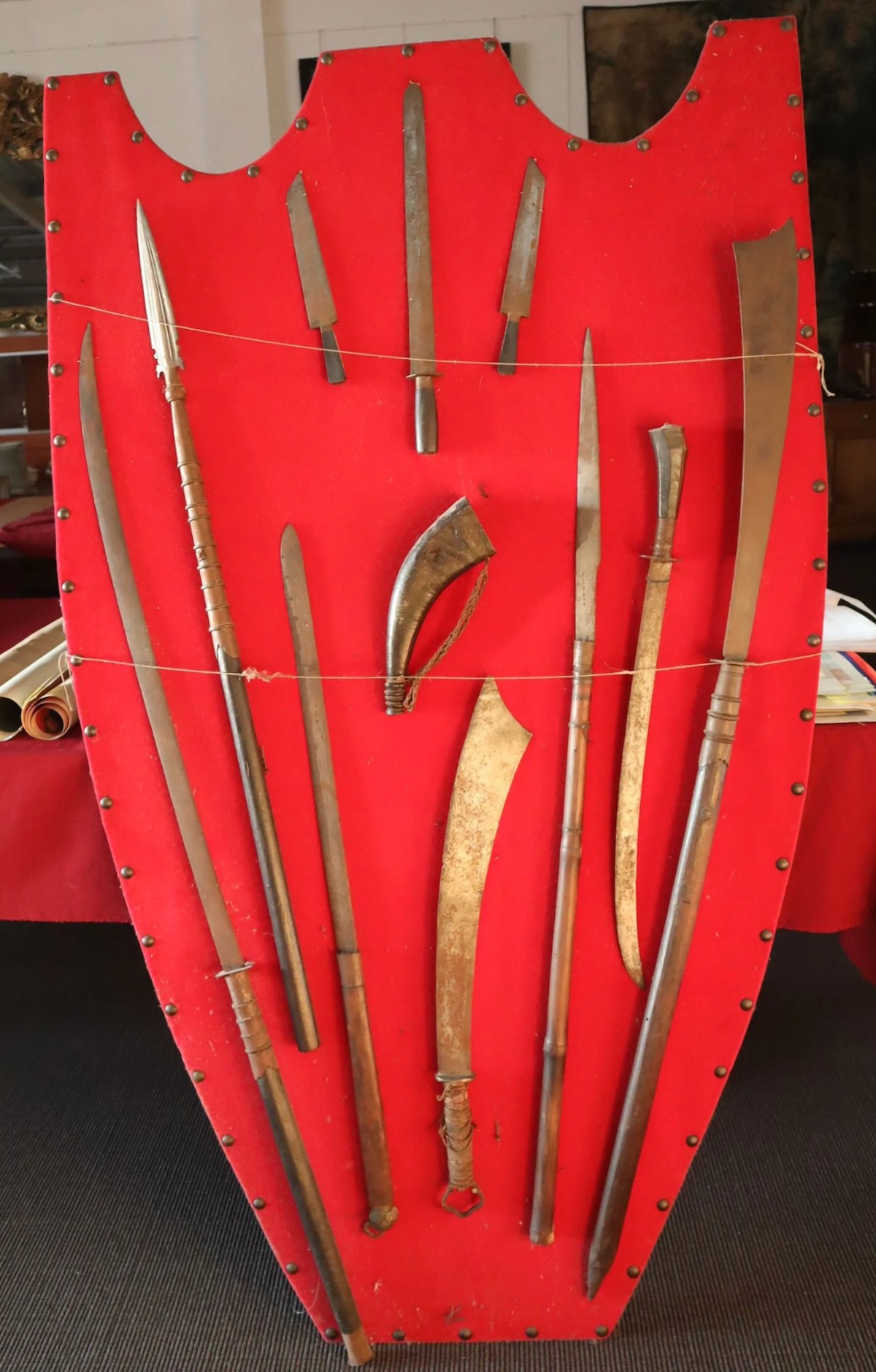 The group consists of:

1. A mác
A Vietnamese version of what the Chinese would call a pōdāo (朴刀). It consists of a dramatically widening blade with a clipped tip, on a long wooden shaft. The shaft is reinforced with a series of iron rings and tubes. The blade is held by a pin, with ribbed washers on either side. It has a small disc guard. The pommel is a cone of sheet iron held in place by a nail.

2. A gươm truòng (鎌長)
The long blade is mounted on a long wooden hilt with a slight thickening in the center. Hilt is reinforced with a series of iron rings and tubes more commonly found on pole arms. It has a small octagonal guard with four concave sides and four flats. The pommel consists of a small tube and a plate held by a nail.

3. A giao
This spear has a most interesting blade of rather complex geometry. It has a thickned center flanked by grooves, and notched rear end with small barbs. It has a spheroid bolster. The foreshaft is again reinforced with a series of iron rings and tubes. The blade is held by an iron pin with two washers. The shaft was shortened at some point, but obviously a long time ago still during its working life, possibly to make it more portable for tight conditions.

4. A spear/lance
The name of this type of weapon is unknown but it's a relatively common occurence in Vietnam, and appears to be native to this area. It has a long, thick, single-edged blade with a sudden widening of the back profile, leading to a point. This example is mounted on a bamboo shaft, its tip reinforced with metal rings and bands. It was shortened in more recent times, probably post-working life.

5. Single-edged two-handed sword
Another weapon of which the name is unknown to me. It consists of a substantial straight but single-edged blade. It is mounted on a long wooden hilt, reinforced with an iron ferrule. It has no guard and never had one. The pommel is in the style of Ming dynasty straightswords, but obviously much later. It seems out of place here and probably came from a Vietnamese saber that sometimes had such pommels.

6. A trường đao (長刀)
The Vietnamese equivalent of the Chinese dàdāo (大刀). Typical of Vietnamese examples, the blade shape is more dramatic with a stronger curve, a higher degree of widening from base to tip, and a clipped tip with concave end. Also, typically Vietnamese, there are engravings on the blade. The hilt is made of cour pieces of bamboo, bound together with cord. The open pommel echoes early Chinese sword pommels of that style.

7. A gươm (鎌)
A single-handed saber with a narrow curved blade with subtle back bevels. It has a quatrefoil guard with small protrusions between each lobe. There is a ribbed washer against the base of the blade, modeled on the Japanese seppa. The characteristically long ferrule is round just under the guard, then has a facetted section, before turning into an octagonal cross-section. The horn hilt continues in this shape, flares out considerably, and then bends downwards. The tang is peened over two washers at the pommel. There are a number of engravings on the blade, typical northern Vietnamese in style.

8. A short straightsword
Straightswords appear under different names in Vietnamese dictionaries, quát being one of them. This example is very much in the Chinese style, especially the blade. However, the guard and horn hilt with nothing but a pommel plate (instead of a full pommel) are very Vietnamese.

9. A pair of short knives
Again much in a Southern Chinese fashion, with wide blades with a suddenly clipped point. It has small brass guards and copper ferrules. Like with the straightsword, the hilts point towards Vietnamese origin; of facetted cross-section and with only a thin plate as a pommel, with their tangs peened over. 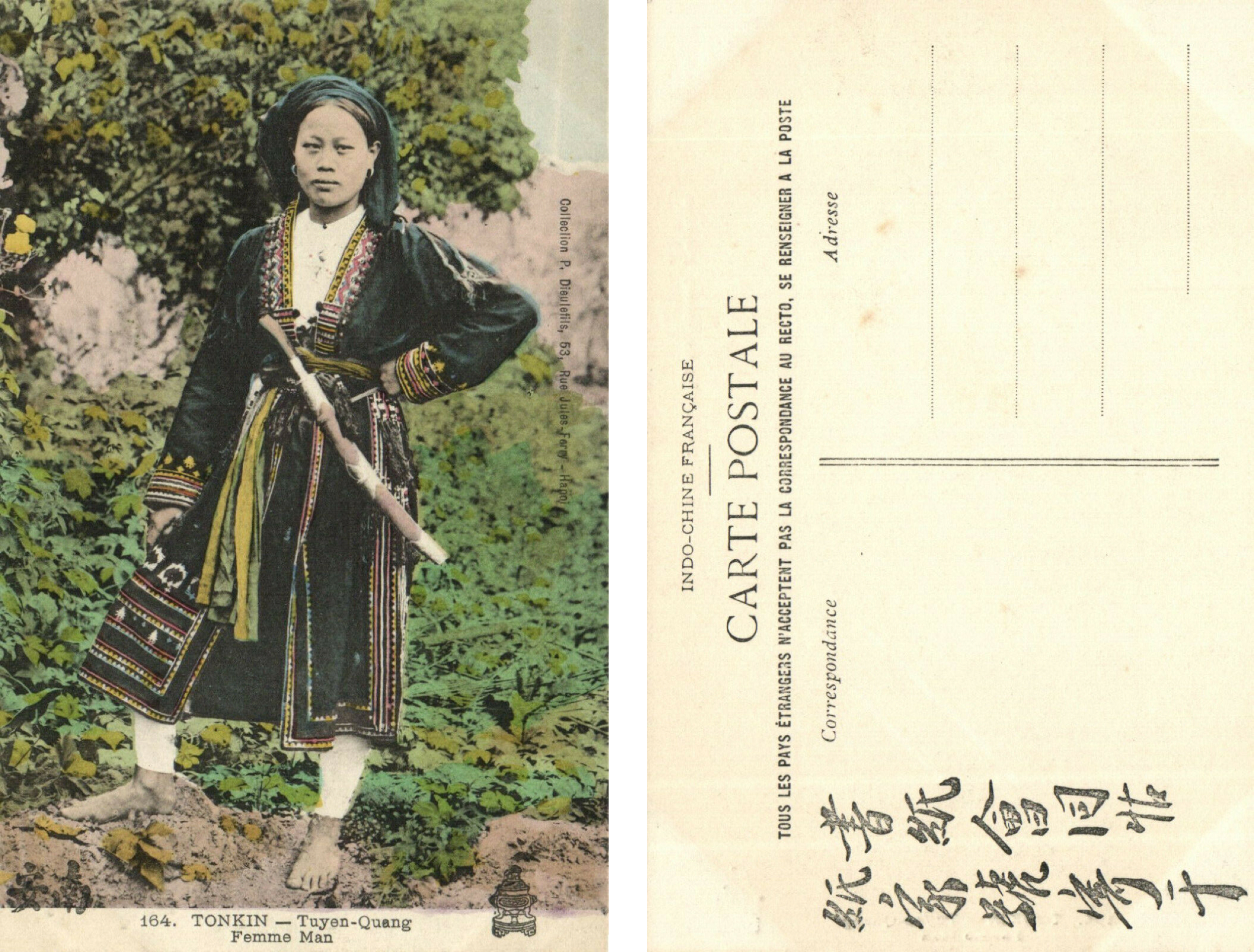 A Tonkinese woman armed with a saber that is very similar to #7.
Notice the hilt profile, smallish guard and long ferrule. 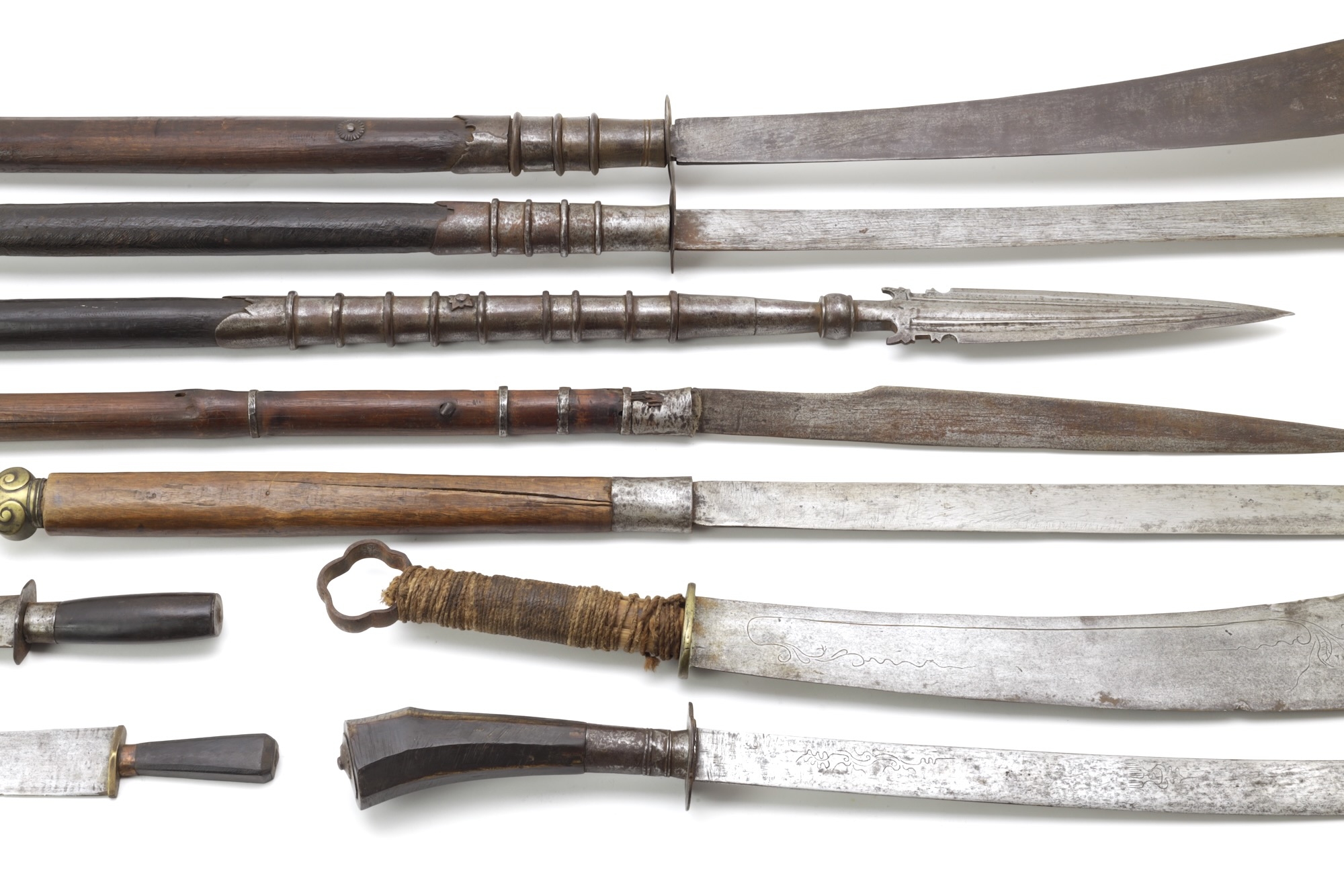