French sword for the King of Siam 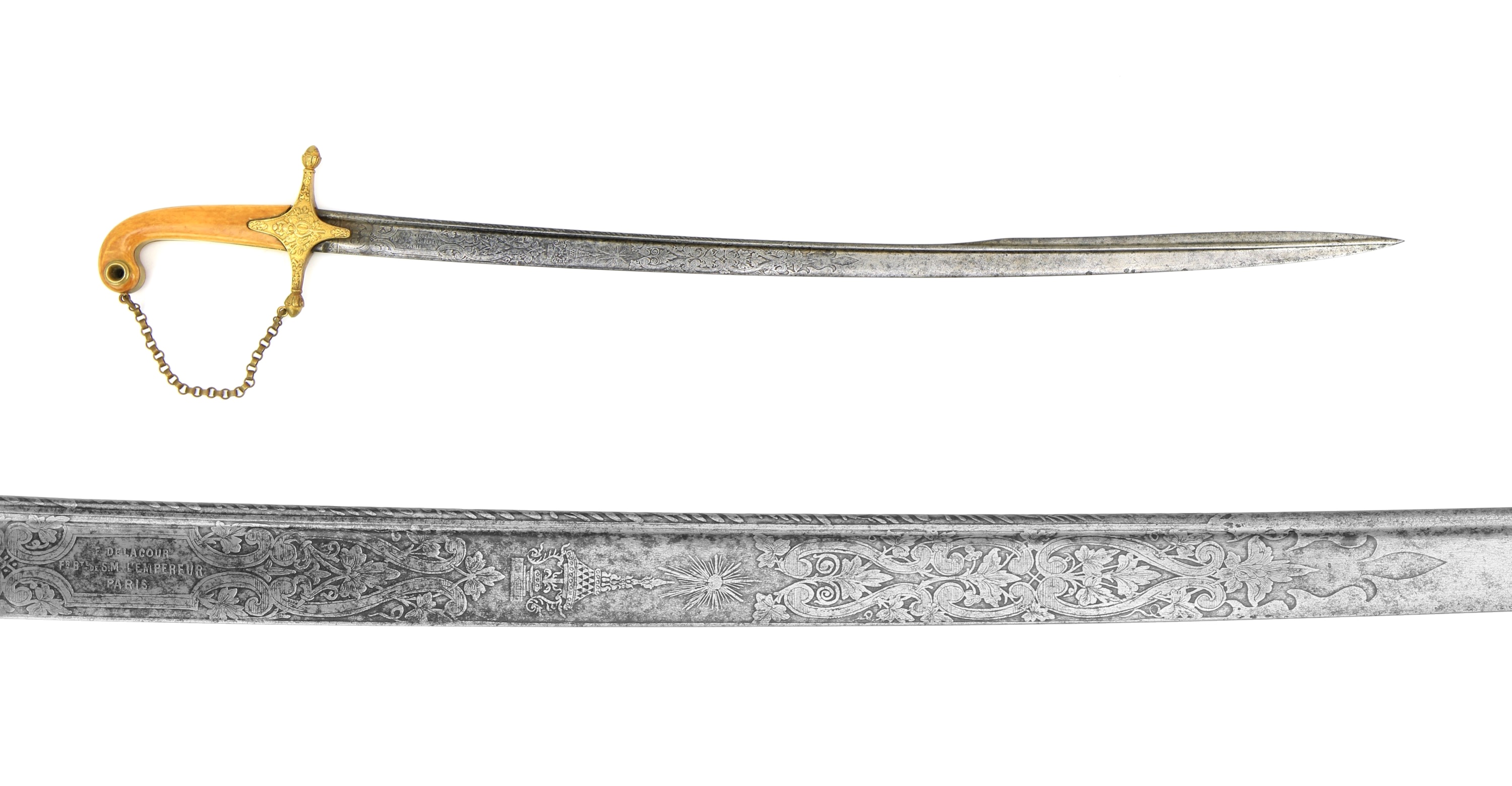 A French pipe-back saber for the Thai market. These sabers have a distinctive spine of round cross-section which runs along the back for most of its length until a raised back edge is formed, and the spine starts to move towards the center of the last double-edged portion of the blade, to terminate at its point.

The pistol-shaped hilt is of Mameluke style that became popular on European swords from the early 19th century onwards. They were inspired by hilts seen on Islamic swords used by the Mamluk warrior class that were encountered on Napoleon'ss campaigns in Syria and the Eyalet of Egypt. The latter was an administrative division of the Ottoman Empire that briefly came under French control from 1798 to 1801.

It has a gilt-bronze crossguard with bud quillons and a panoply of arms in the center on each side. The hilt is lined with brass, with on either side ivory scales. A retention chain runs from the forward quillon to the pommel.

The blade is beautifully etched on both sides in a typical European fashion with designs of leaves and neoclassical architectural elements. The spine is etched with a meandering creeper with small leaves. On the right side, the blade is etched with a cartouche containing the marking:

On both sides of the blade also features a Thai Royal Emblem: 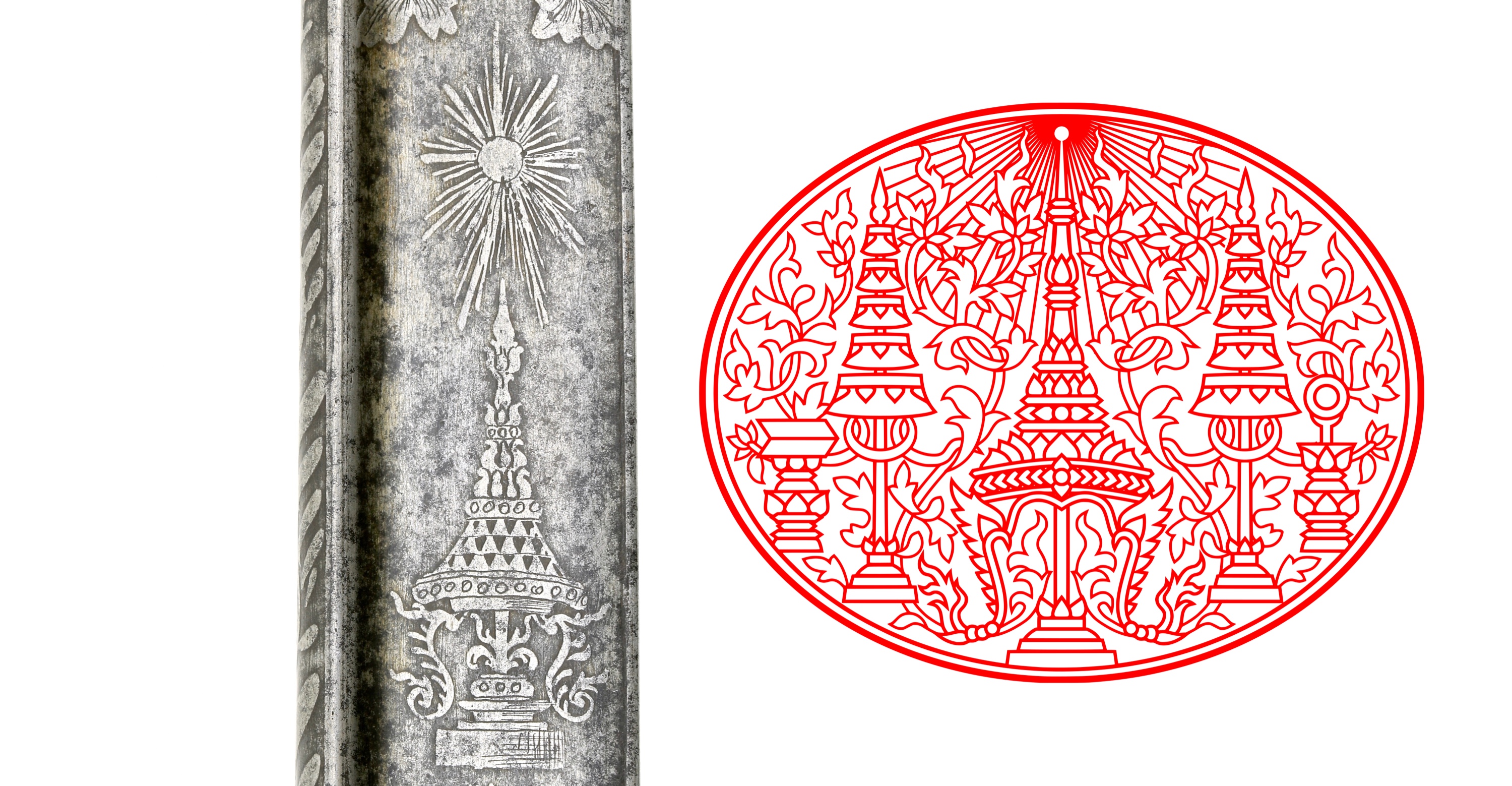 This is the personal royal emblem of King Rama IV, known as Mongkut The Great, as it was used from 1855 onwards. It dates the sword from between 1855 to his death in 1861.

Francis Delacour was a notable fourbisseur or cutler in Paris. Active from around 1830 to ca 1870. The company was supplying weapons to the Imperial Guard, made fine presentation pieces, and a large number of its products were meant for export.1

FR BTE DE S.M. L'EMPEREUR stands for Fournisseur Breveté de Sa Majesté L'Emperor or "Patented Supplier for His Highness the Emperor". A distinction Delacour earned in November 1854.1 He was the exclusive supplies for some models of swords for the imperial guard.

A fascinating figure. He spent many years as a Bhuddist monk, a custom for Thai men at the time. During that time he studied English texts on Western astronomy and mathematics and once he was crowned king in 1851 he was to become a great innovator, adapting modern science and technology, abolishing slavery, and leading Siam to become a modern nation in European eyes. Mainly due to his efforts, Thailand has been able to resist colonization where most of his neighboring countries failed.

Mongkut The Great was also keen to adopt Western style dress and is often depicted in a Western style military jacket, with a walking cane and a European style saber. 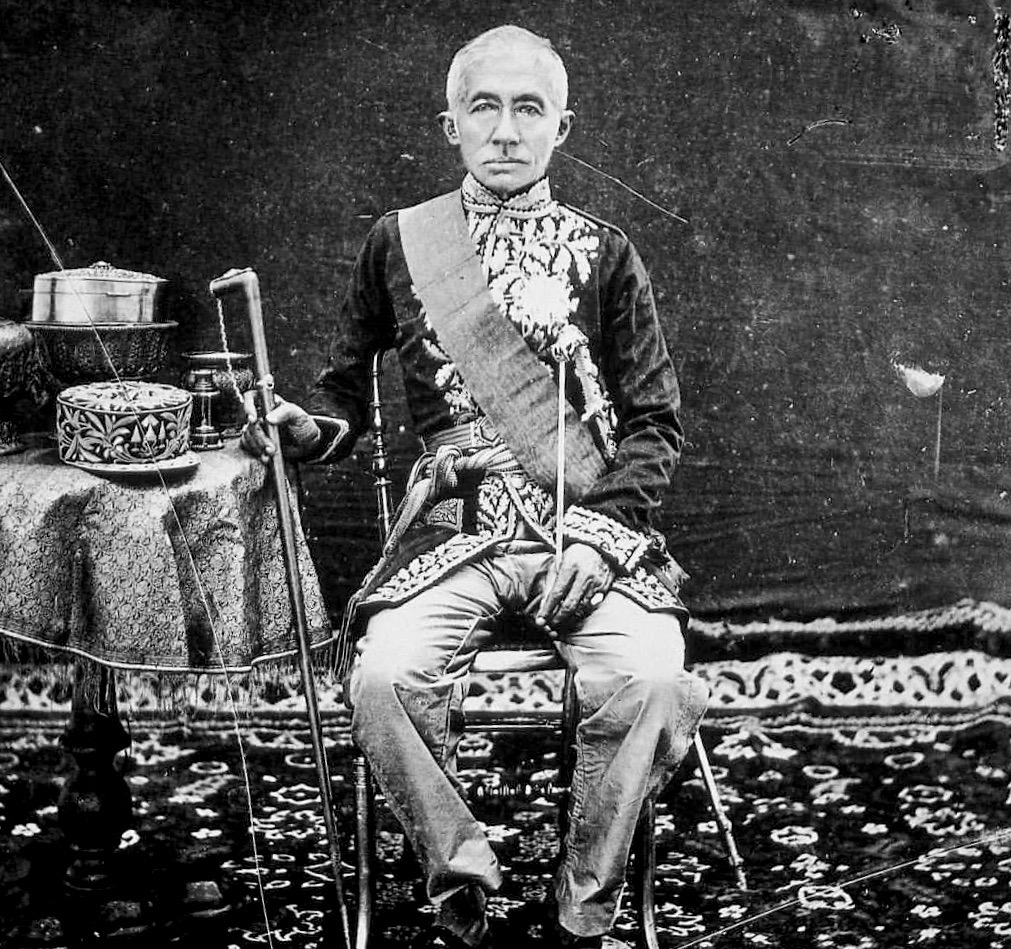 I always like cross-cultural pieces and this is a fascinating example. Made with a pipe-back blade that was invented and popularized first in Great Britain, on a hilt that was inspired on Mamluk hilts encountered on Napoleon's Egypt and Syria campaigns, produced by a notable Parisian maker.

The presence of the personal seal of King Mongkut the Great indicates that it was most likely made for himself or at least for his court. Delacour was known to make both presentation pieces, and to fill many custom foreign orders. Foreign observers in Siam at the time noted that Siamese officers invariably wore European pattern sabers.3

The piece could be presented to the court of King Mongkut by a foreign diplomat, but considering it doesn't bear any further inscriptions to indicate this, it is more likely that it was custom ordered by his court for local use.

In either case, it was made for the court of King Mongkut the Great between 1855 and 1868.

The item is within article 2 of council regulation EC NO338/97 and within Convention of International Trade of Endangered Species (CITES): The materials were removed from the wild and significantly altered from their natural state well before the date of the convention: June 1st, 1947. At the time of writing, September 2020, it can be freely traded within the EU without a permit and is eligible for CITES export permit for trade outside of the EU.

Buyers outside of Europe: Beware that it may not be possible to export the item to your country due to restrictions on the international ivory trade. CITES sets the minimal restrictions, countries and states under the convention often maintain further restrictions on top of CITES. Both export and import permits are required. 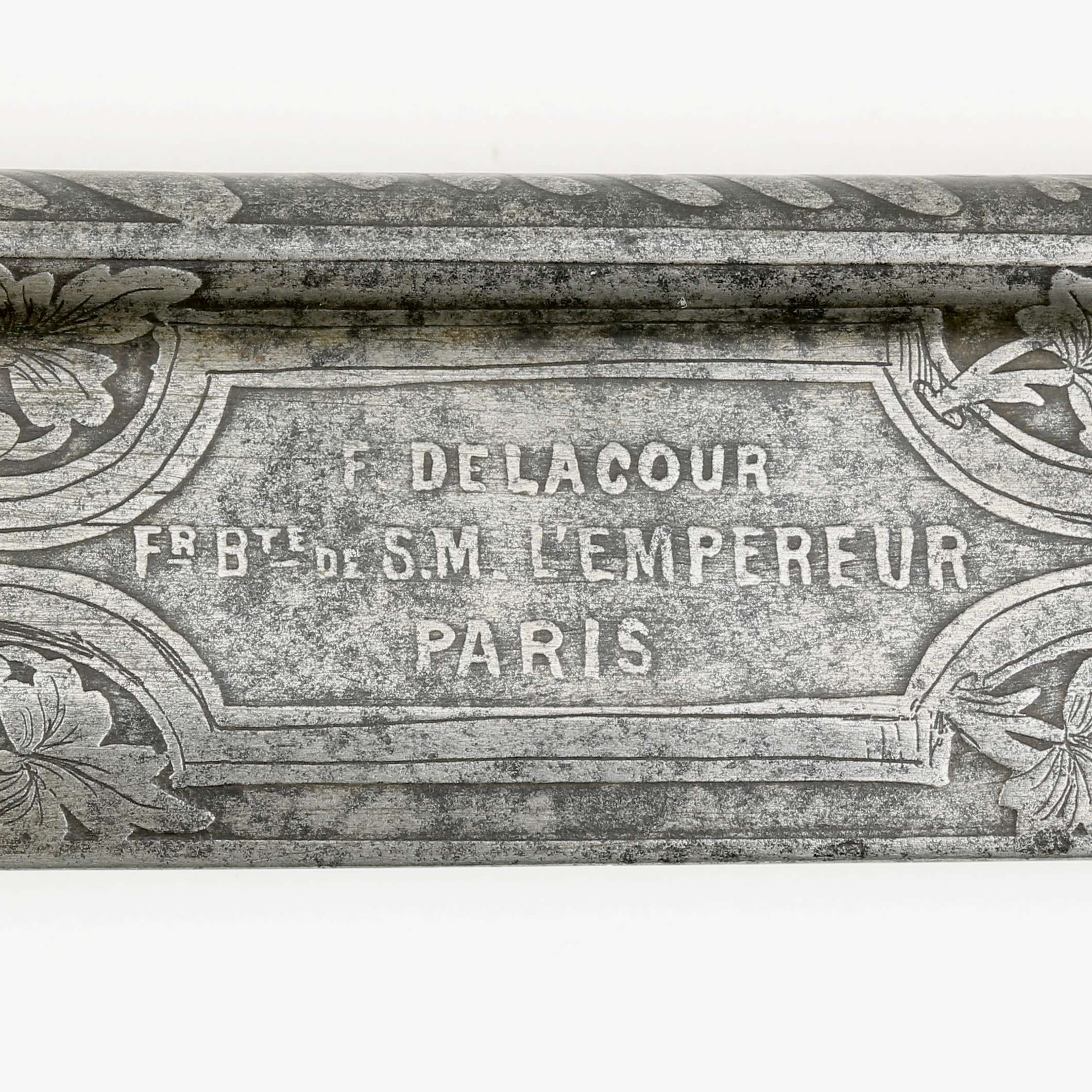 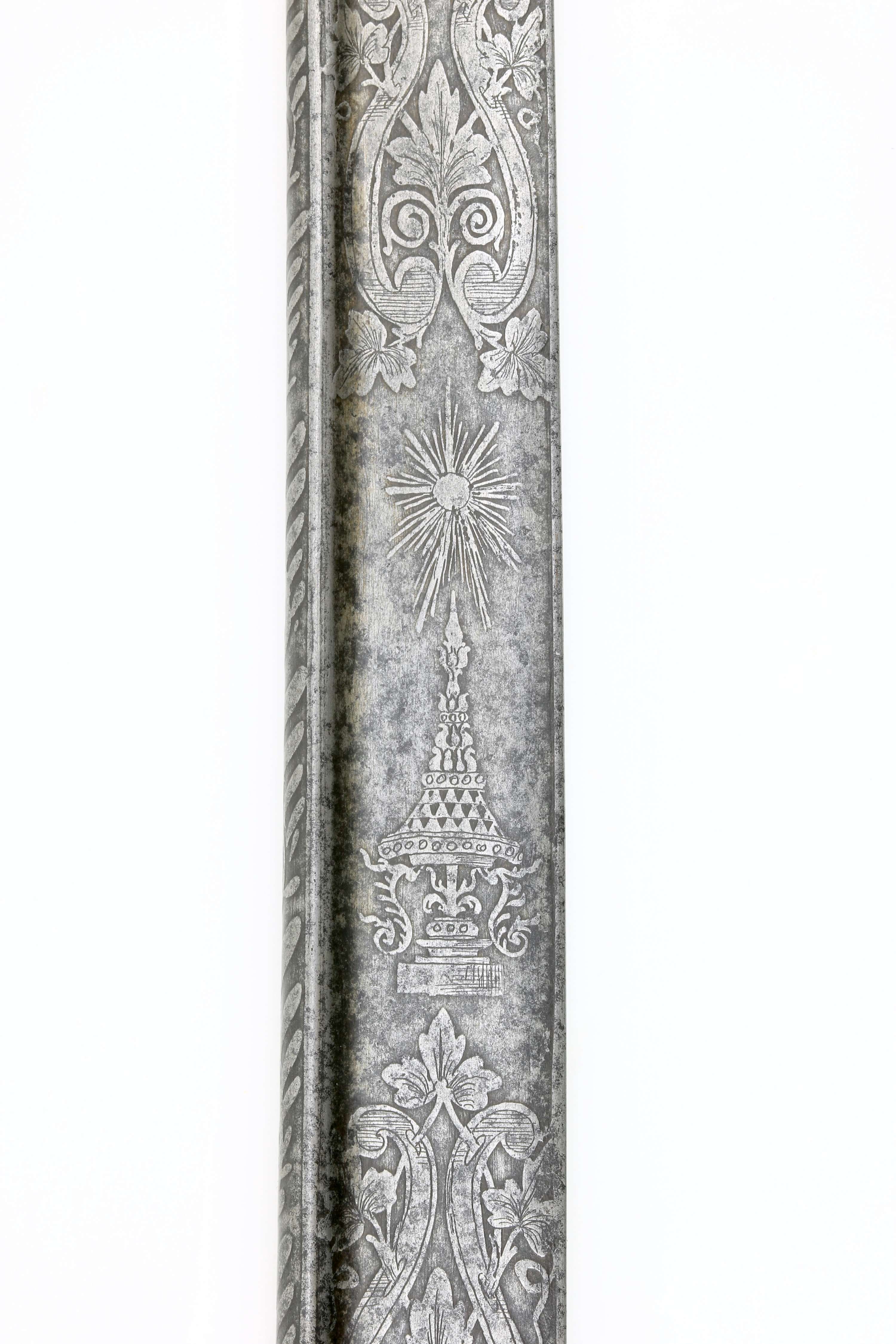 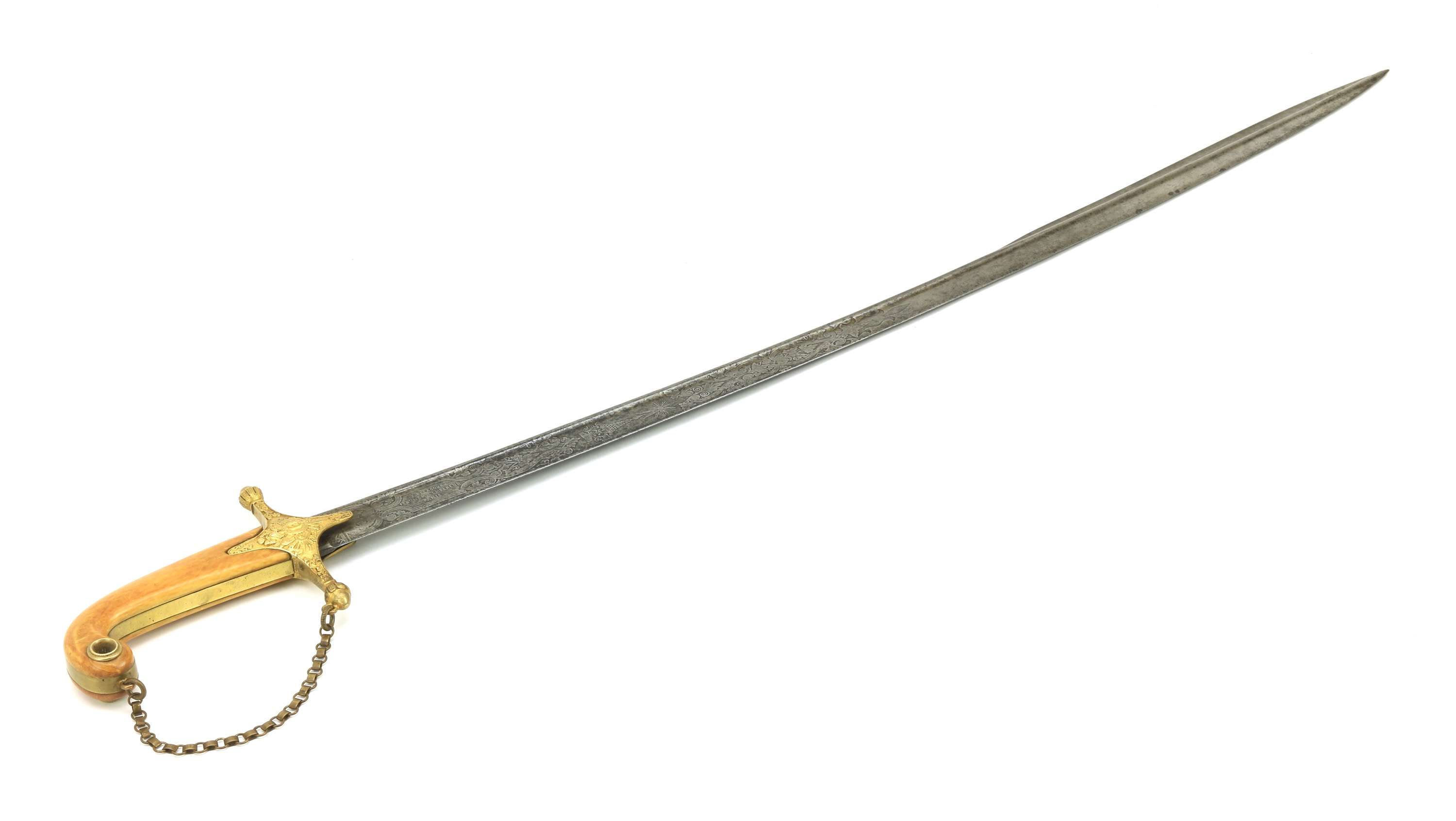