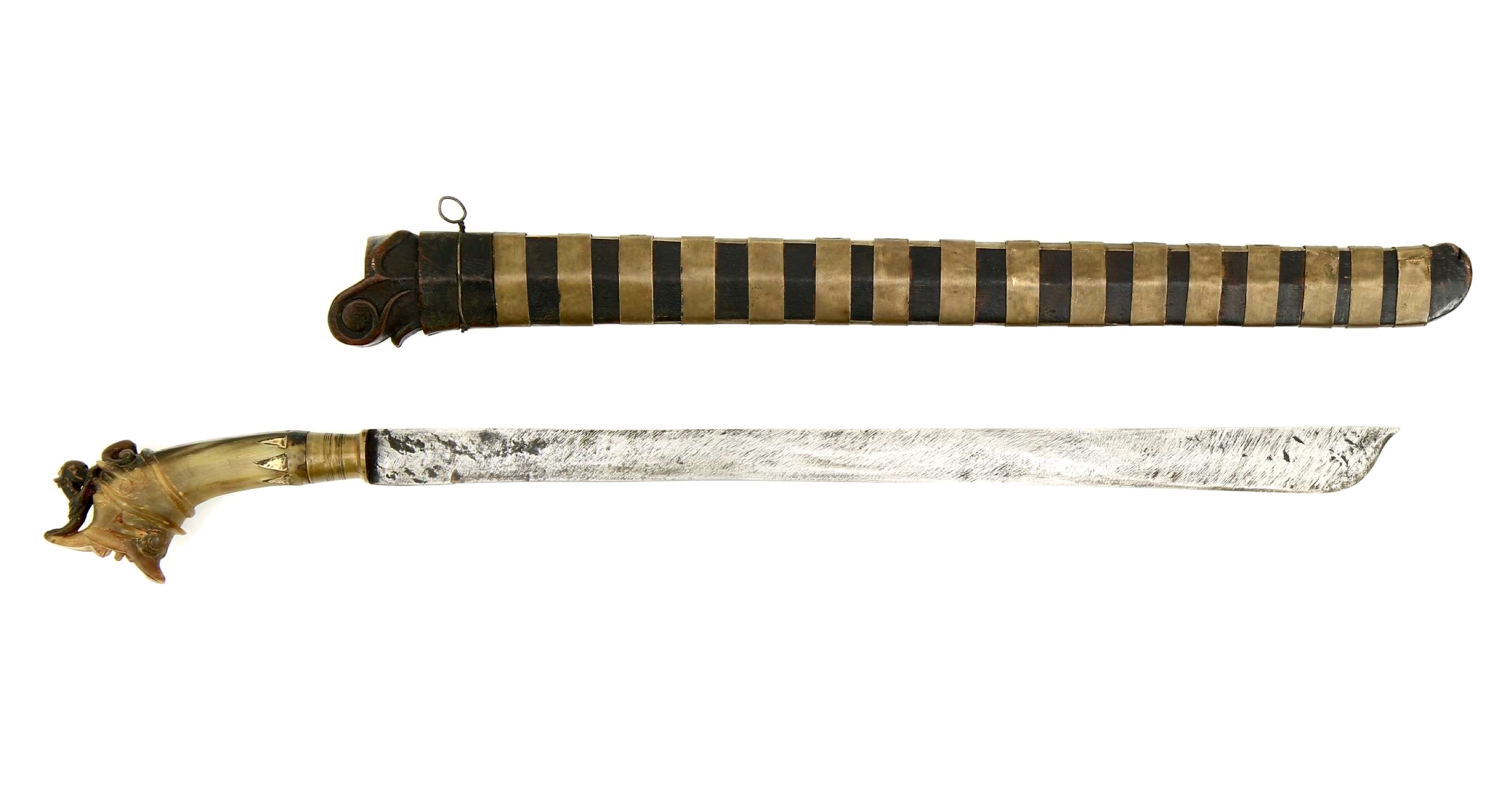 Swords from the Island of Nias, west of Sumatra, are generally called belatu but Schröder, who worked on the island as a colonial administrator from 1904 to 1909, considers this wrong and pointed out the locals referred to the different types with different names entirely. This particular type is referred to as tòmbà in the north and telögu in the southern part of the island.1

Steel wqas imported into the island from China by Chinese merchants and worked locally into blades. Most of these swords have carved handles, usually of wood, with the quality of carving being considerably better in the south. Hilts are usually made of wood, but sometimes buffalo horn was used that was imported from nearby Sumatra.2

The hilts are often iconographic but the subject of the carvings has been subject to debate.3 Stylistically, the main head emerging from the pommel is clearly strongly related to the makara, a mythical sea creature often seen in Indian iconography. Some relate it to the làsara, a stylized crocodile, but these are generally not depicted with teeth. Schröder believes the tusks are a reference to the strength of an elephant. Other theories include that they represent wild boar. Schröder dismisses this idea based on the fact that boar were frequently hunted by the Nias, and therefore would look strange on a warrior's sword pommel. But there is often great mutual respect between the hunter and hunted, and the wild boar is known to attack fiercely when provoked. This has made the boar a symbol of courage in Japanese samurai culture, and with this in mind the Nias depiction of a boar's head on a pommel isn't that strange after all.

On top of the main head there is usually a smaller figure, almost humanoid, that is often thought to represent a monkey. These are called bekhu.

A very good example of a telögu from Nias with some unusual features.

The blade widens very gradually towards the tip, which has an S-shaped profile forming a small, sharp tip that is aligned with the spine. Of the over 100 examples in Dutch ethnographic museums, this is the first one I have encountered with this particular blade shape.

The hilt is made with a lathe-turned brass bolster and a piece of rare light-colored water buffalo horn. Such horn was a relatively rare occurrence and highly prized in most cultures. The people of Nias did not keep such an animal but imported the material from Sumatra.

The hilt has its typical zoomorphic pommel with a tusked monster with wide-open jaws, with on its forehead is a prone monkey-like figure called bekhu. The tip of one tusk is broken, see photos.

The grip section has seven facets, each facet has an inlay in the form of a triangle made of a gold alloy, possibly the electrum that was also used for Sumatran coins. At the back of the "neck" of the animal head are two more.

Made of two pieces of wood, joned together by 16 brass bands and one piece of copper wire. The top is nicely carved and accomodates the blade perfectly.

The sword's unusual features indicate it was made for someone of considerable means and importance. Horn as a hilt material is rare among swords of Nias because the horn had to be imported to the island. This piece is made with light-colored horn, which is the rarest and most prized of water buffalo horn.

The hilt is further inlaid with triangles of a gold alloy in the form of triangles. Triangle motifs are called tumpal in Indonesian. They symbolize divinity, knowledge, and power.1

A parallel can be drawn to the "crowns" found on Acehnese state weapons such as the sikin panjang and rencong that were presented to the Sultan of Aceh to military commanders and noblemen, upon which the decoration of this sword was possibly inspired. 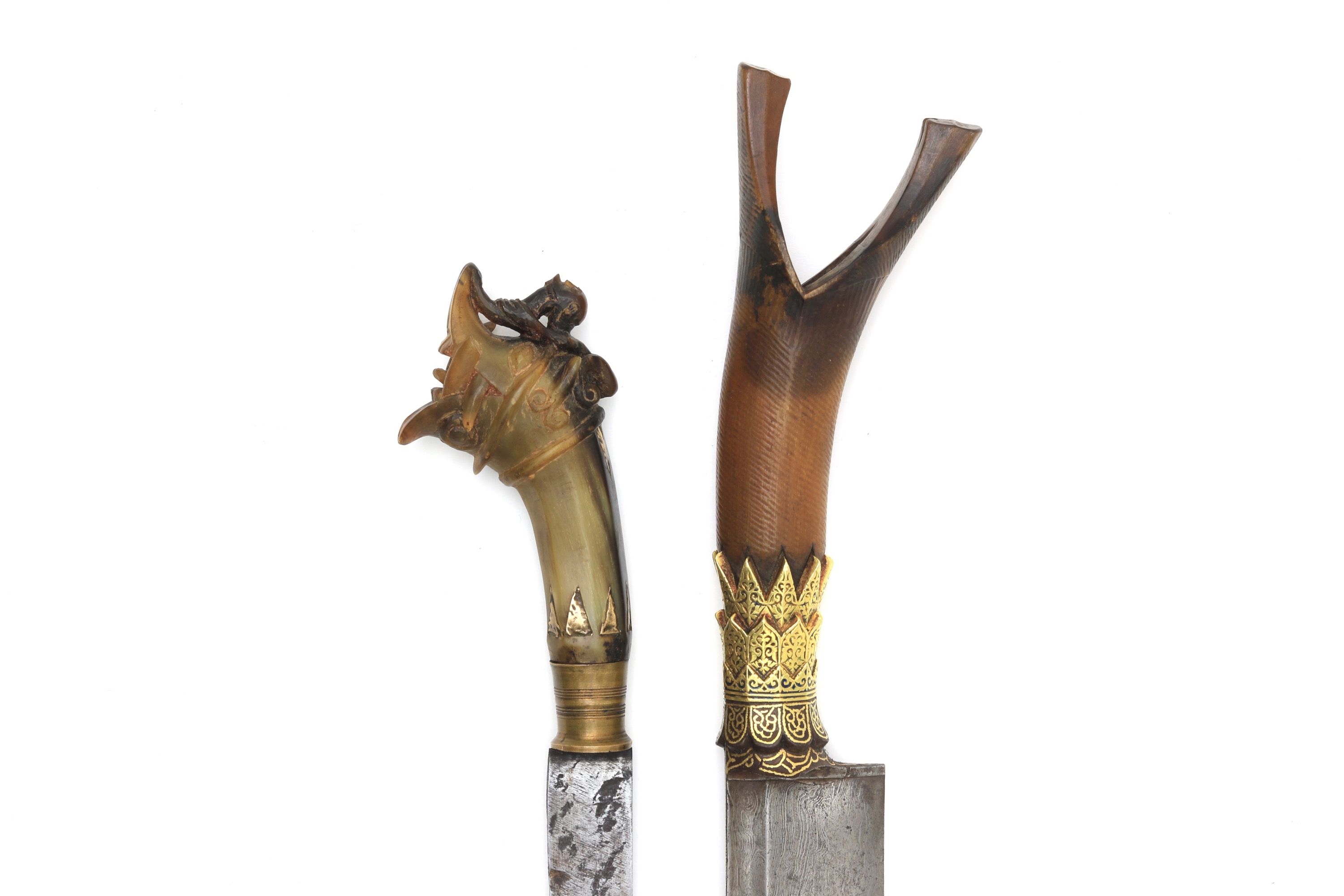 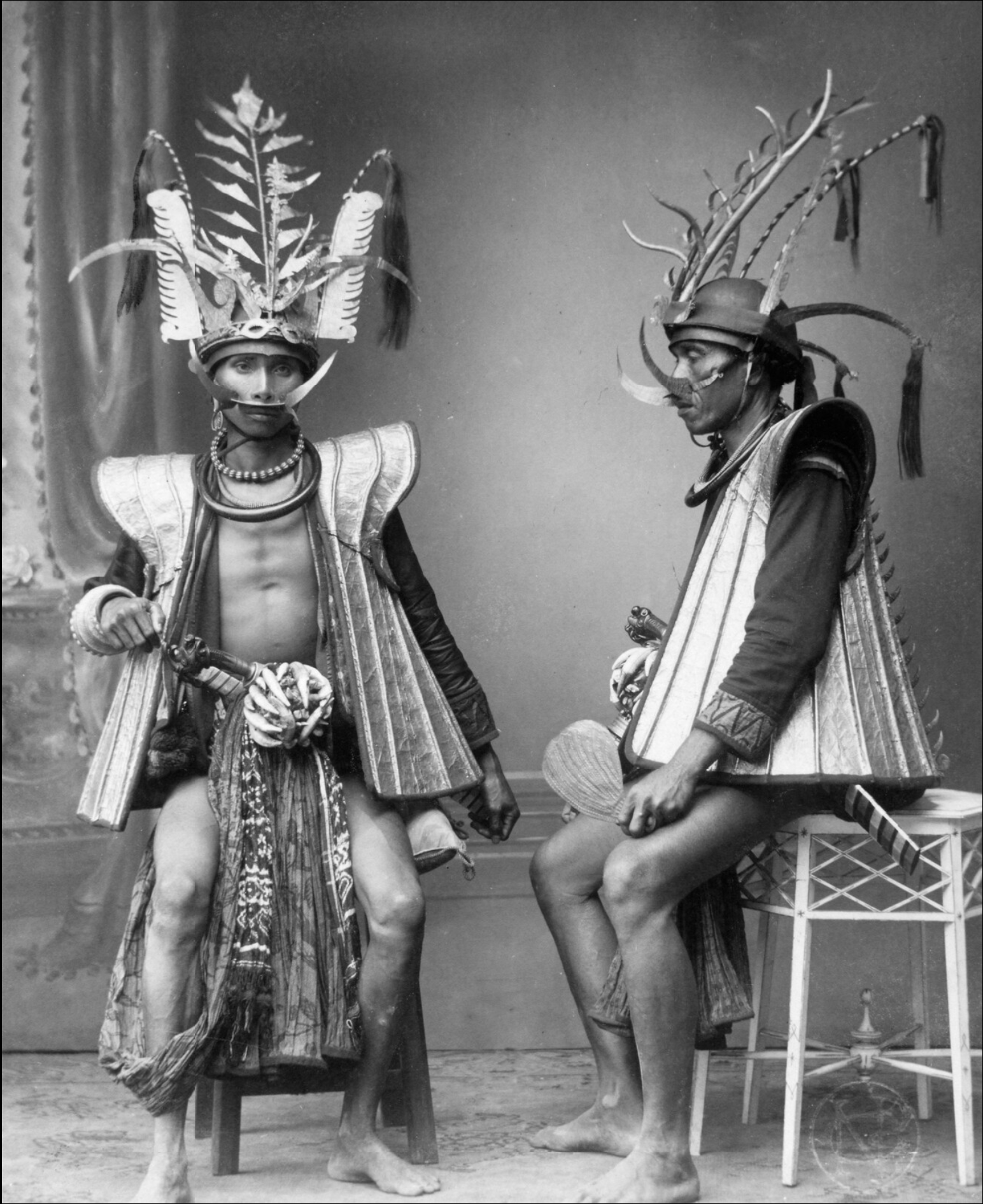 Two Southern Nias chiefs in full regalia. Tropenmuseum collection accession number: TM-60042492
Notice the sword of the person on the left, with similar tumpal motifs on its hilt.

A charming sword from Nias that combines a slightly unusual blade form with a hilt made of rare and expensive materials. It features a hilt of light colored water buffalo horn with inlays of a total of nine triangles in gold alloy. Such triangles are rarely seen on Nias swords, and their execution in gold alloy is possibly unique to this piece.

Notes
1. Nurul Ridha Utami & Hadjar Pamadhi; An Axiological Study of Tumpal Batik Motif and Its Relevance to the Character Education. Advances in Social Science, Education and Humanities Research, volume 327. Proceedings of the International Conference on Art and Arts Education (ICAAE 2018). 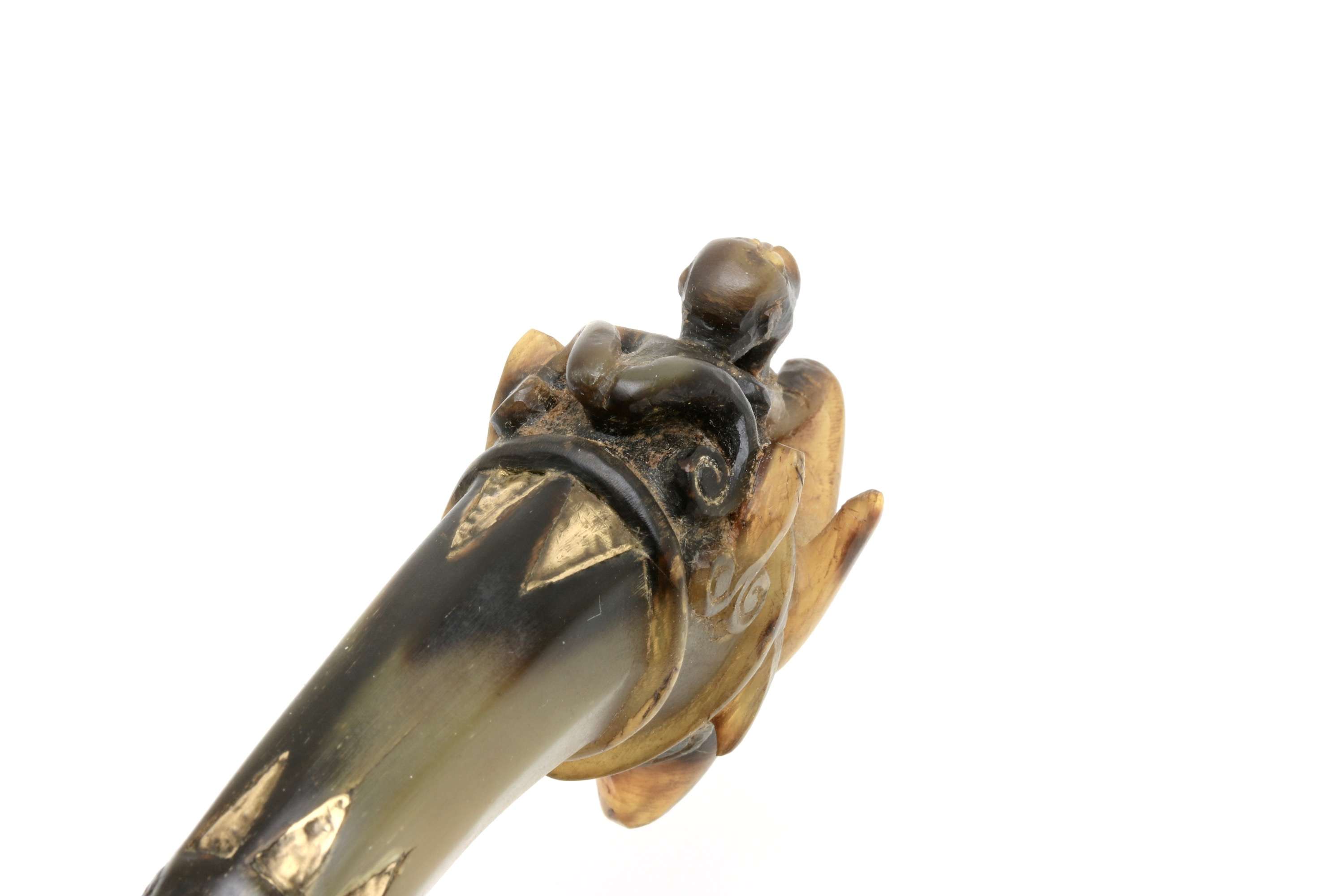 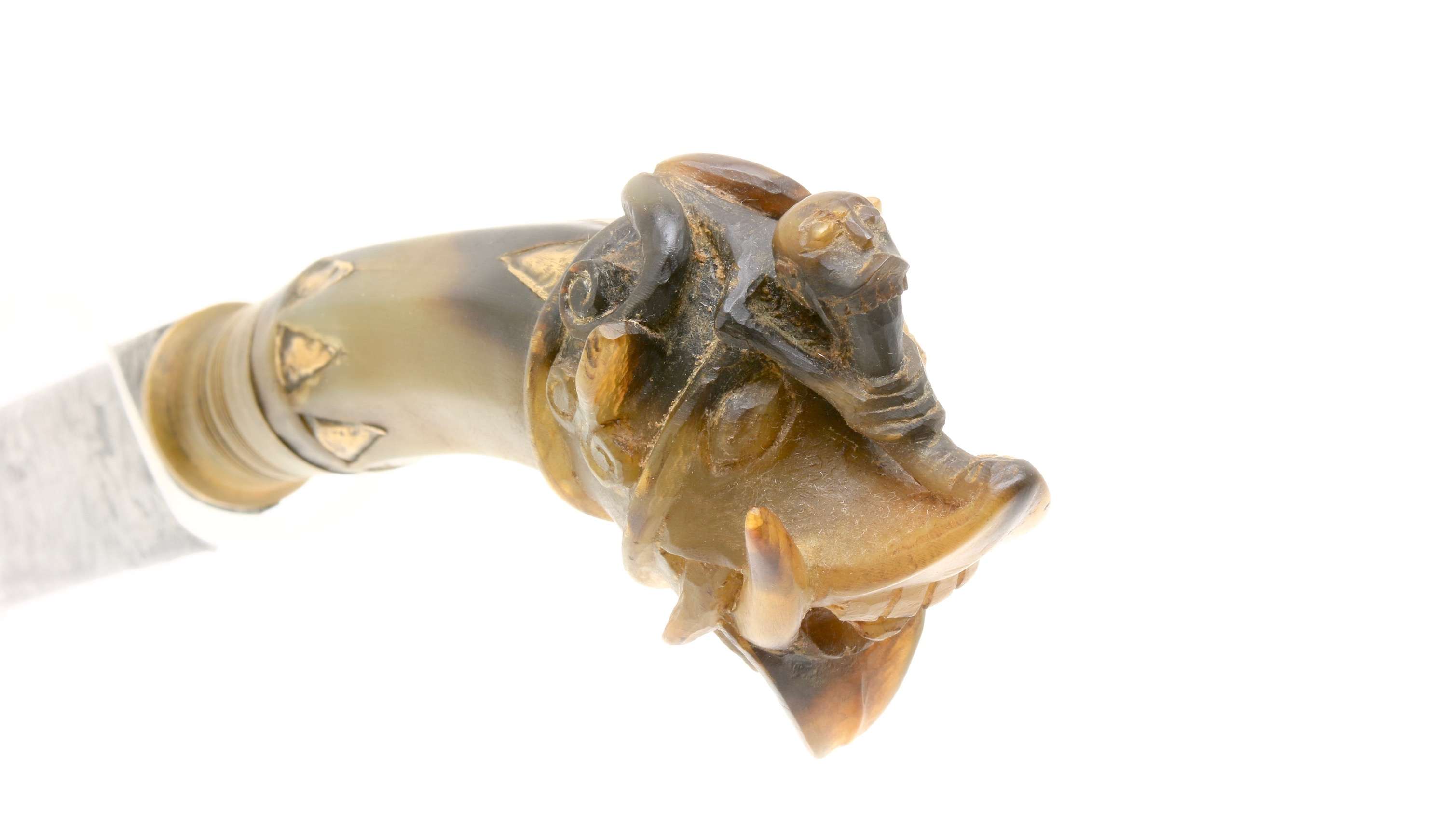 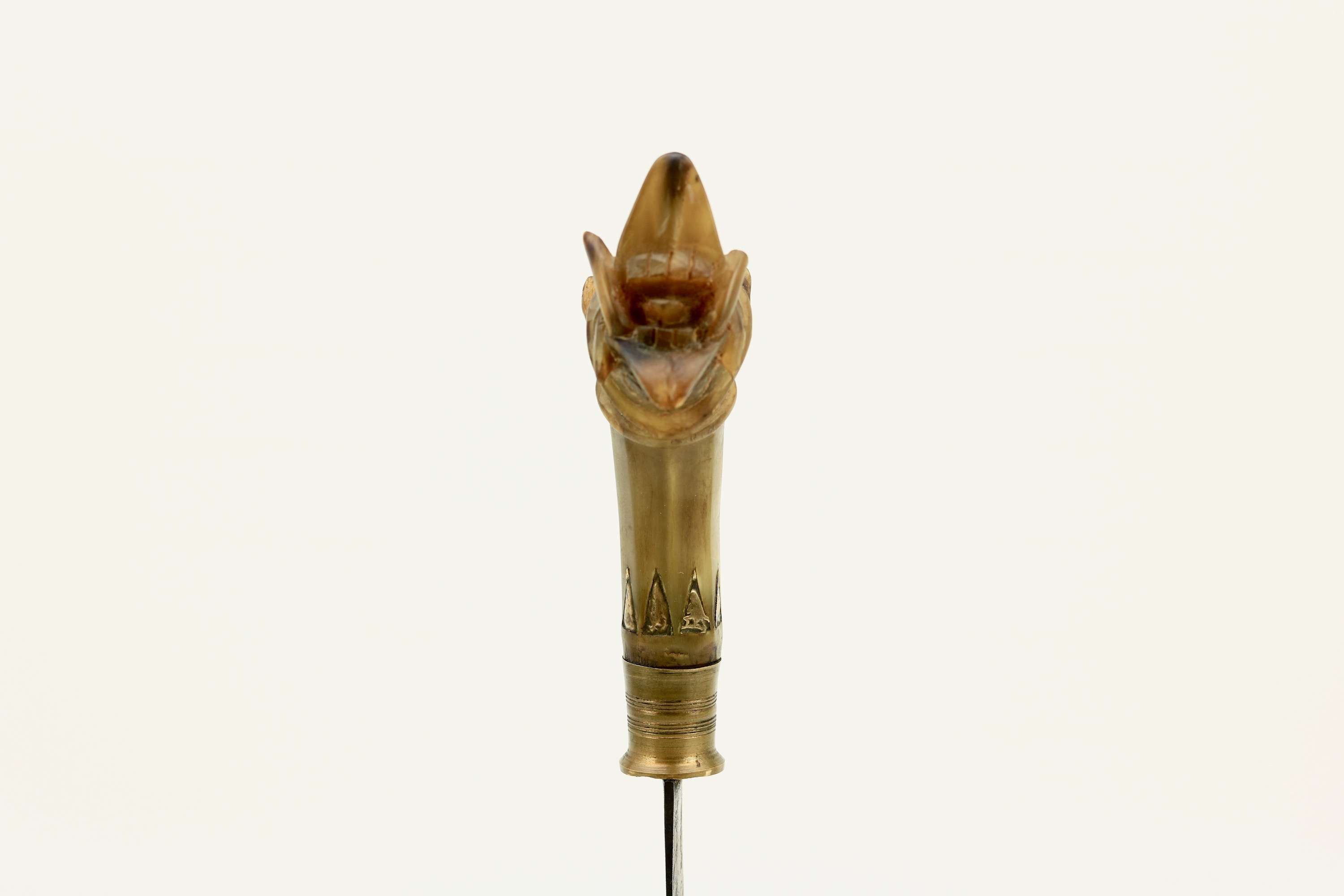 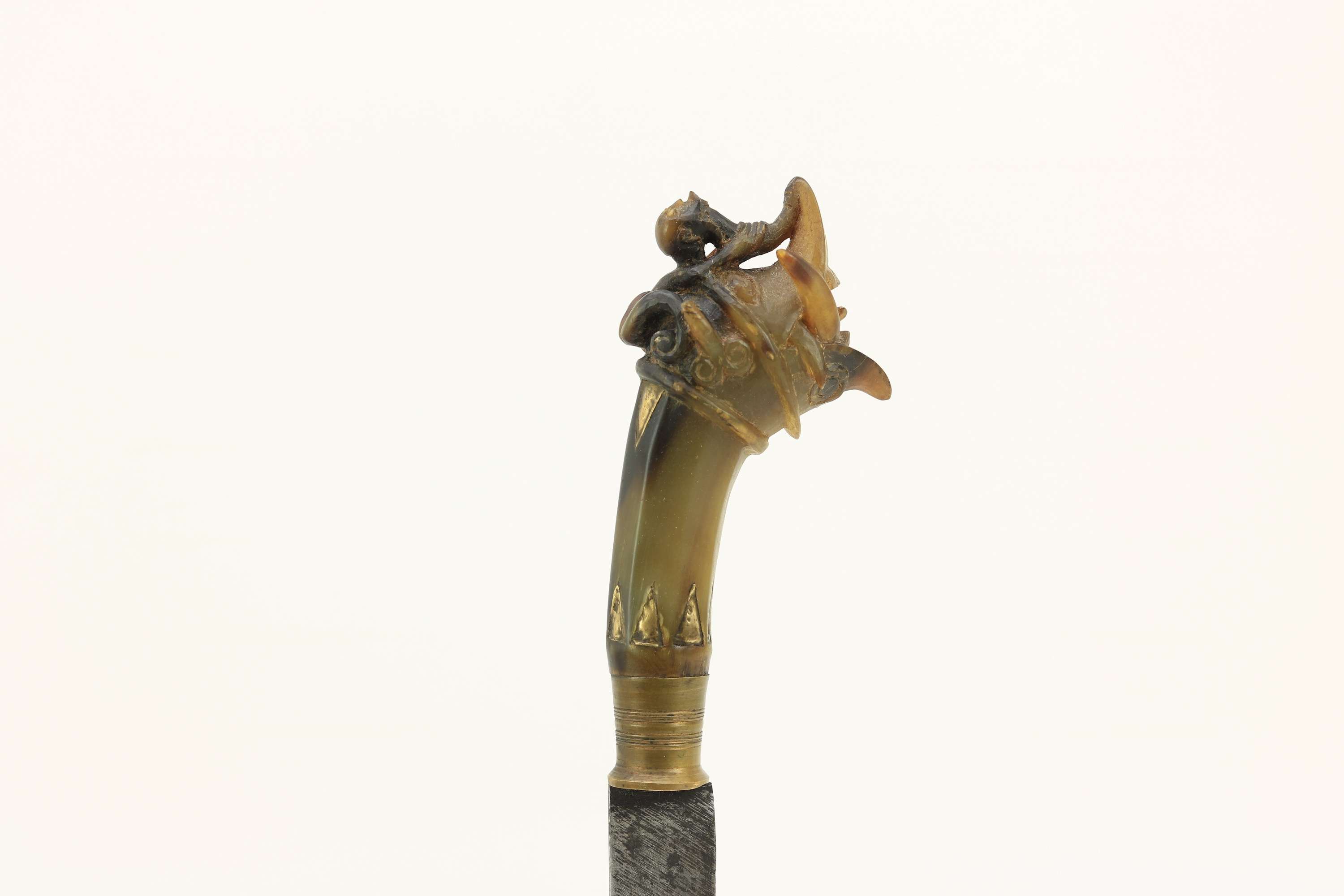