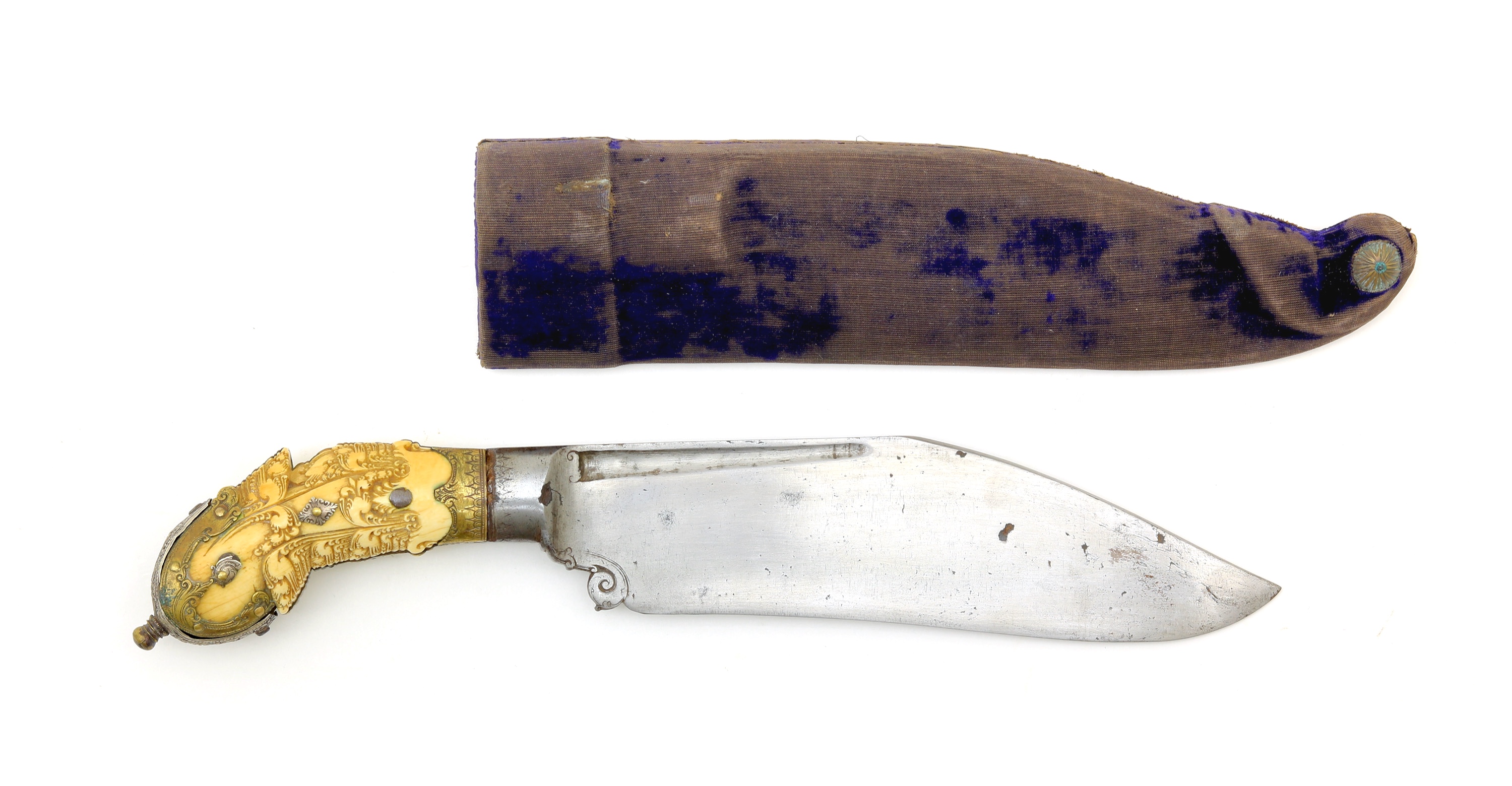 (At base of edge)

The best example of the heavy pihiya kättha variety that I have had so far. Such knives were made primarily in the 18th century in the Four Workshops of the King of Kandy, and were bestowed as favors by the king to newly appointed officials and other dignitaries.

It has a massive blade that is forged out of a single piece with its iron bolster. There is a prominent groove on either side near the spine. The base of the blade has a typical Sinhalese curl on the edge side, called liya-pata, a staple of Sinhalese design. The edge is slightly recurved, the spine of the blade slopes down to meet the edge. The bolster is subtly engraved with designs that show a bit of European influence. At the back of the blade is an old inventory number: 3398.

The full tang construction hilt is covered with two slabs of elephant ivory, entirely carved with a great multitude of liya-pata and finished with ornamental plating in silver. Both sides of the hilt are further embellished with brass and silver ornaments.

The showpiece is the pommel which is covered with a single, large piece of silver sheet. It is engraved with very accomplished Sinhalese floral scrollwork, chased and chiseled in fine relief.

Knife is in excellent condition. The blade is preserved in nearly pristine condition, the spots you see are slag inclusions and cold shuts from the initial forging process that were present when new. Their presence indicates the use of local iron that was not very refined from the original ore.

The hilt is almost 100% intact, save for minor damage to one of the smallest brass ornaments at the pommel, right side. The scabbard is structurally sound, but with significant wear to the velvet. It also developed a crack at the top.

A very nicely preserved specimen of such a heavy pihiya kättha, with minimal losses, and in good condition. The hilt is very nicely carved and the work on the bolster is an elegant and less commonly encountered touch.

CITES
The handle is of ivory of the species elephas maximus, listed on CITES appendix I.

Buyers outside of Europe: Beware that it may not be possible to export the item to your country due to restrictions on the international ivory trade. CITES sets the minimal restrictions, countries and states under the convention often maintain further restrictions on top of CITES.