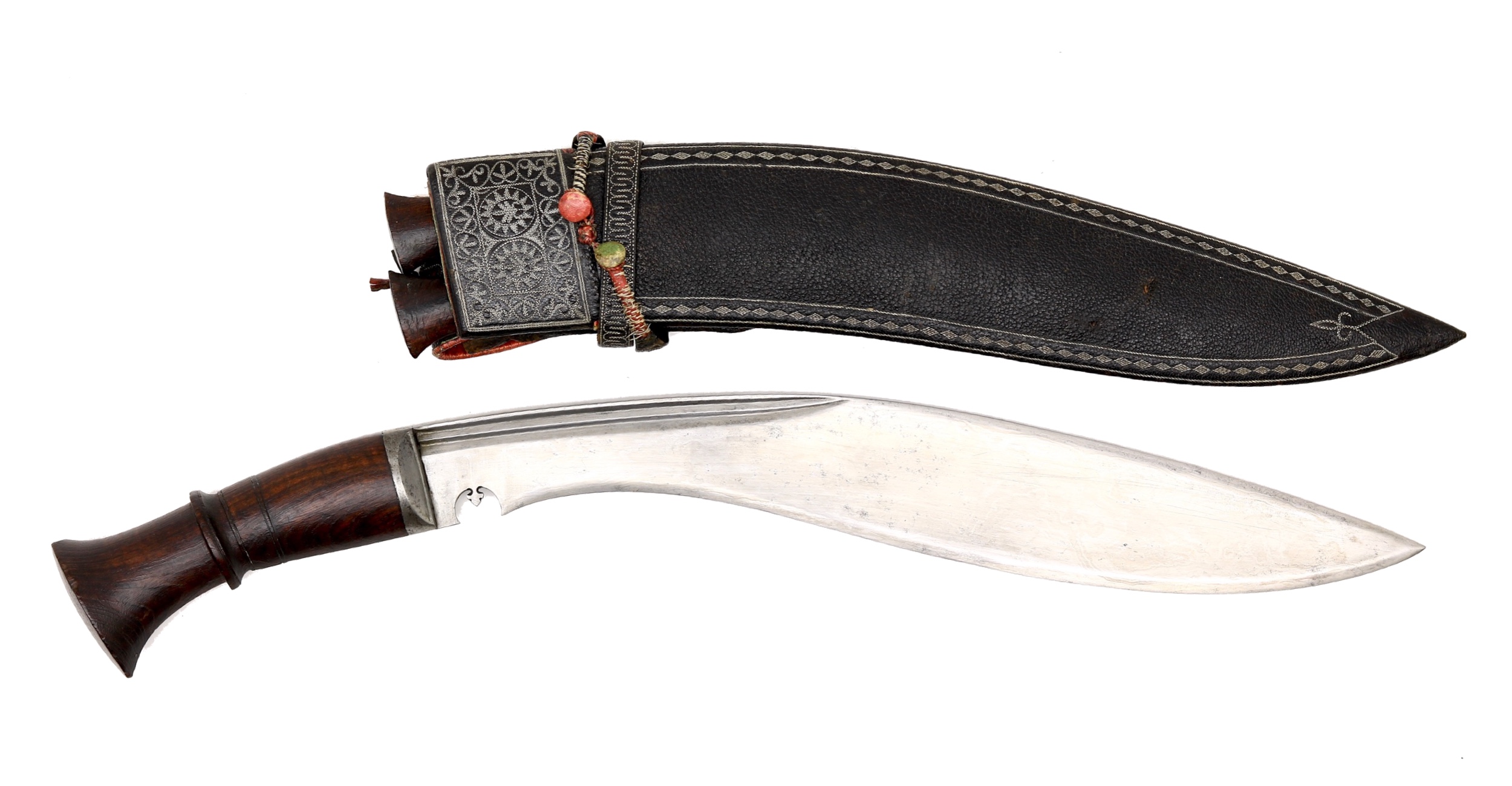 In May 1857 several instances of anti-British resistance broke out in India, a historical event now known as the Indian Mutiny. The Nepalese prime minister immediately offered 6000 troops to aid the British, the Gurkha soldiers fought bravely and fiercely and played a key role in some decisive victories against the uprisers.

In one instance, for example, the Gurkhas attacked the village of Manduri which lead to a decisive victory with 200 enemy forces killed, compared to only 26 Gurkhas lost. September 27 in Mubarakpur an army of an estimated 4000-5000 was defeated by a Gurkha force of 1100.1

Notable among the pro-British Gurkha forces was the Sirmoor Battalion that had been fighting for the British since 1817. It remained a strong and loyal force throughout the Indian Mutiny and played an important role during the Siege of Delhi, one of the most important battles of the mutiny era, for which they were awarded the Queen's Truncheon that is still carried by them in ceremonial occasions.2

Mutiny era khukuri are now highly sought after by collectors.

Notes to introduction
1. Ian Heath; Armies of the 19th century, Asia, Central Asia and the Himalayan Kingdoms. Foundry Books, 1998. Pages 131-132.
2. See: Wikipedia article on the Sirmoor Rifles and the Queen's Truncheon article of the Gurkha Museum.

Understated is the word. It has a substantial fine layered blade of simple but precise geometry. There are two narrow grooves near the base, running to almost halfway up the blade. The spine is without pronounced "shoulder" but with a more rounded profile. Both sides of the blade are flat ground, with a strong convex secondary bevel leading up to the edge. The forging is very tight for a khukuri, with no forging flaws whatsoever.

It has an unusual and rarer form of kauri, with a fleur-de-lis shaped protrusion. Above it, on the left side, is a stamped mark that somewhat resembles the standard kauri.

The grip is made of a single piece of hardwood, now with a beautiful deep patina, the wood's grain showing in a slight relief from many decades of handling. There is a raised ridge and two carved bands. The bolster is made of iron, with brass soldering.

The scabbard is made of black leather of the finest bookbinder's quality. It is decorated with geometric and floral designs in quillwork; embroidery that is done with cut strips of quill. The work is extremely fine. 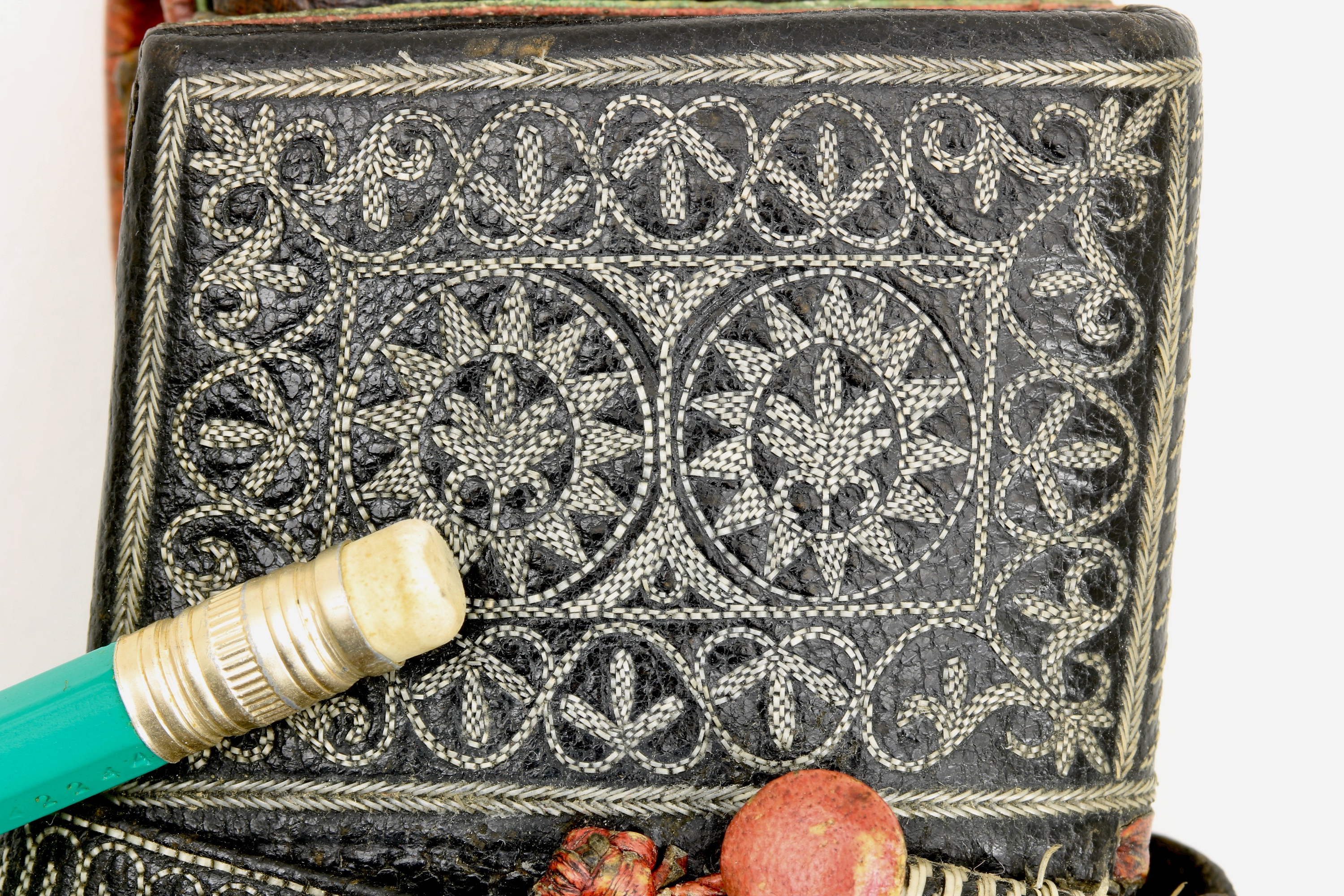 A close-up of the fine quillwork on the scabbard, compared to the end of a regular pencil for size.

The scabbard has a back pocket with two small utility knives, called karda, and a pouch that was frequently used for tinder. The scabbard is without a chape, but with a suggestion of it done by the quillwork. There are no signs that it ever had one. The quillwork at the bottom of the scabbard emulates the fleur-de-lis design seen on the blade's kauri.

There are some striking similarities between this piece and the so-called "Fischer kukri", a khukuri that belonged to Lieutenant John Frederick Lane Fisher, commander at the Sirmoor Battalion, who fought at the Siege of Delhi in 1857. 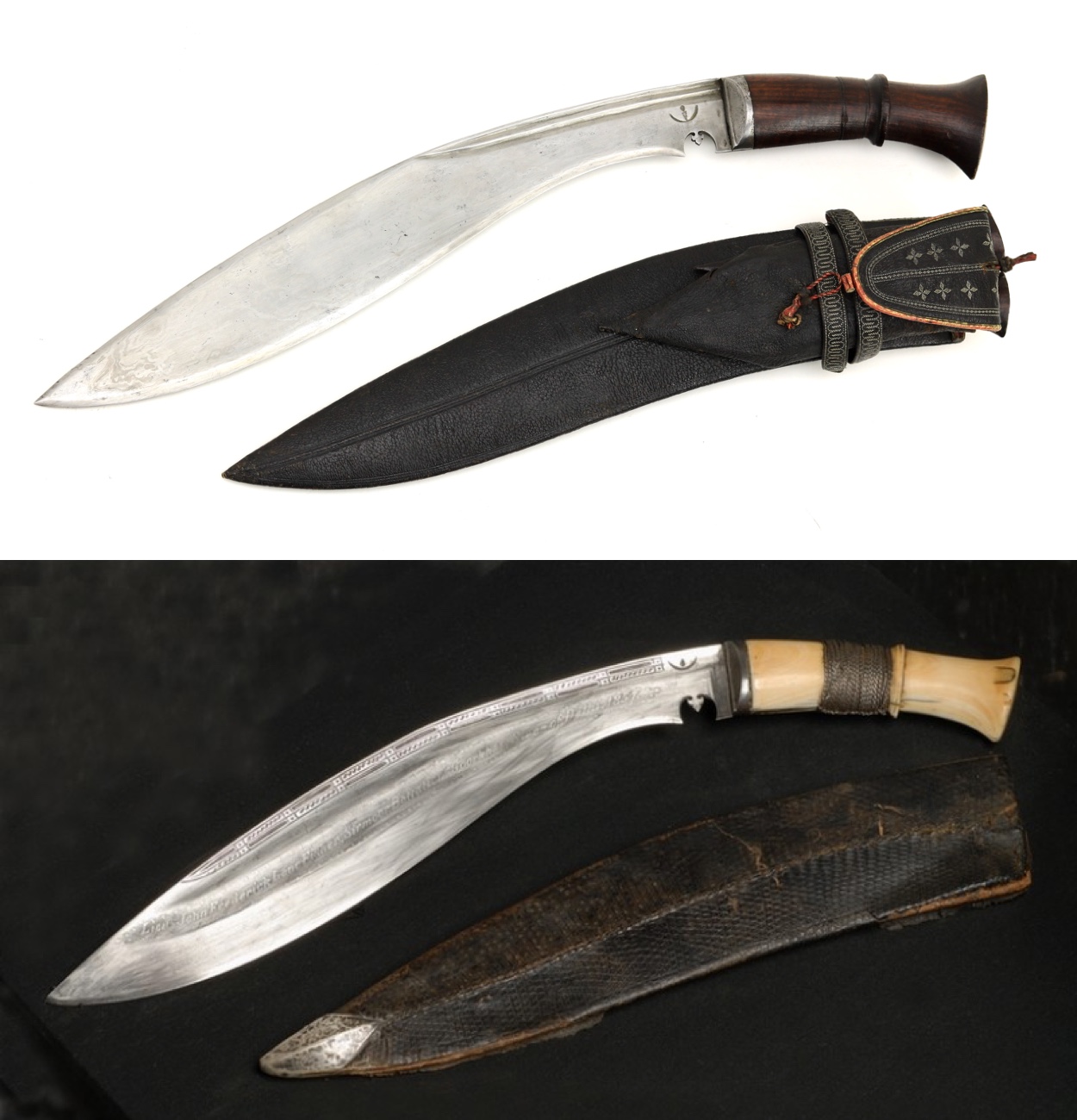 Top: The subject of this article.
Bottom: "The Fisher kukri"

The museum gives the following description:

"Lieutenant John Frederick Lane Fisher was an early commander in the Sirmoor Battalion, one of the first units of Gurkhas raised by the Honourable East India Company for service to the Crown. He was present alongside his men during the Siege of Delhi in 1857, at the defensive fortification known as ‘Delhi Ridge’. The Sirmoor Battalion fought alongside the 60th Rifles and the Corps of Guides during the siege and distinguished themselves in close hand-to-hand combat against rebel troops. Fisher would later achieve the rank of Major General." 1

When comparing the two, several things stand out. There is, of course, the identical marking and kauri. Also of note is the gradual curve seen in the spine, with no pronounced "shoulder", and a very similar overall profile.

Egerton also describes a khukuri with some similar features:

This piece is described as:

The segmented blade decoration reminds strongly of the Fisher piece, while the blade profile is similar to both. The dark wooden handle with flaring pommel is similar to the khukuri presented in this article. It also comes with a black leather scabbard with quill embroidery. This piece was collected in 1855, two years before the Indian Mutiny of 1857, and clearly represents a style common among high-end khukuri of the day.

Both this piece and the Gurkha Museum's "Fisher kukri" are not typical Sirmoor Batallion khukuri, but officers were probably able to purchase their own.

While we cannot prove this particular khukuri was used by any notable troops during the Indian Mutiny, the strong resemblance to the Fischer example and the Egerton example does put our example in the 1850s.

In near-mint condition. Some very old chips off the wooden handle, but no splitting. Scabbard leather in excellent condition, save for a few very minor blemishes. Quillwork all intact save for the work on the bands leading up to the two buttons on the front. Pockets and accessories also in top condition. See photos.

A beautiful khukuri that may seem simple at first, but close examination of each and every part reveals quality throughout. Blade profile and markings suggest it was a high-end piece made around the 1850s, a time when Gurkha soldiers aided the British in beating down the Indian Mutiny. 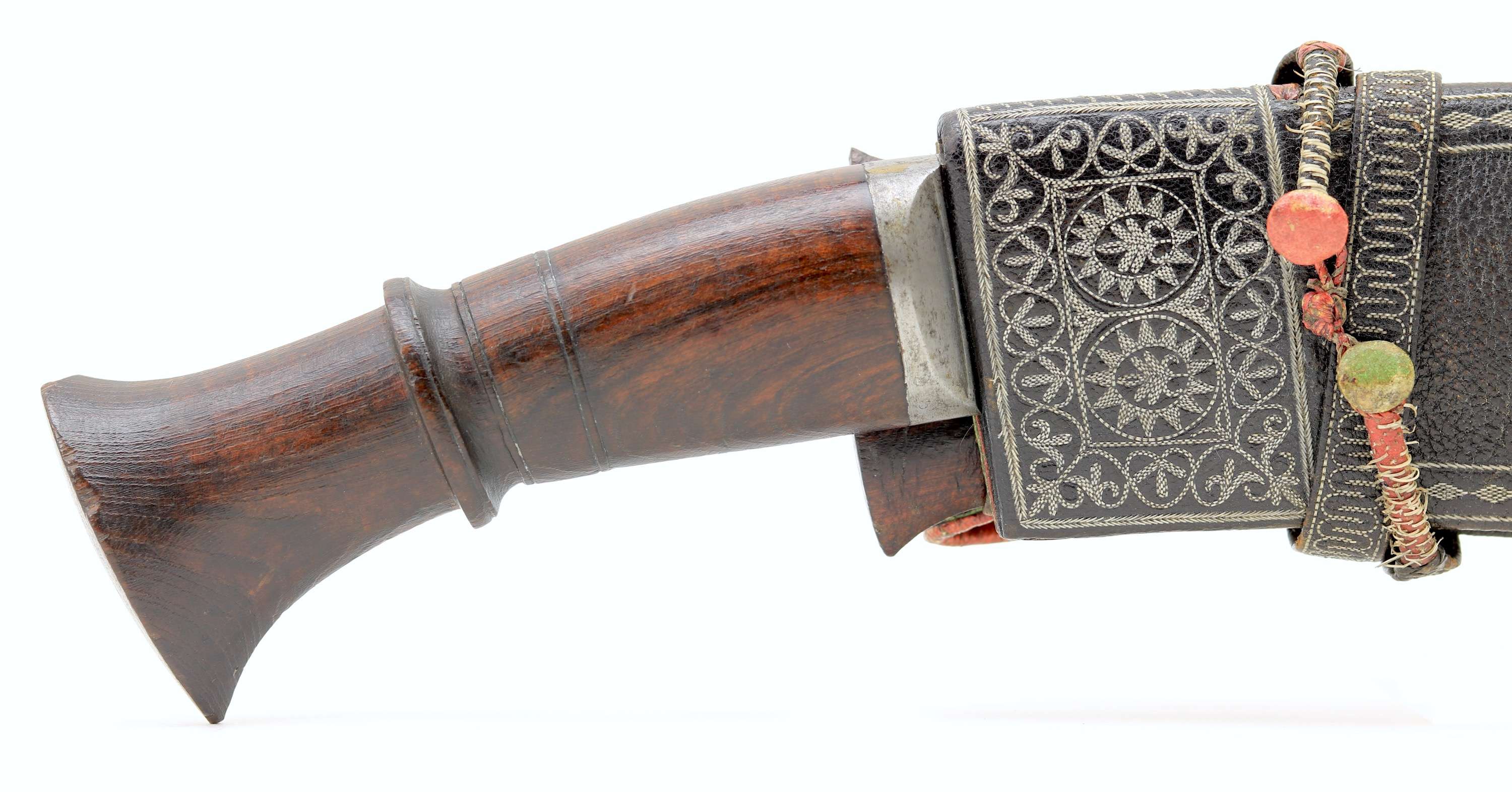 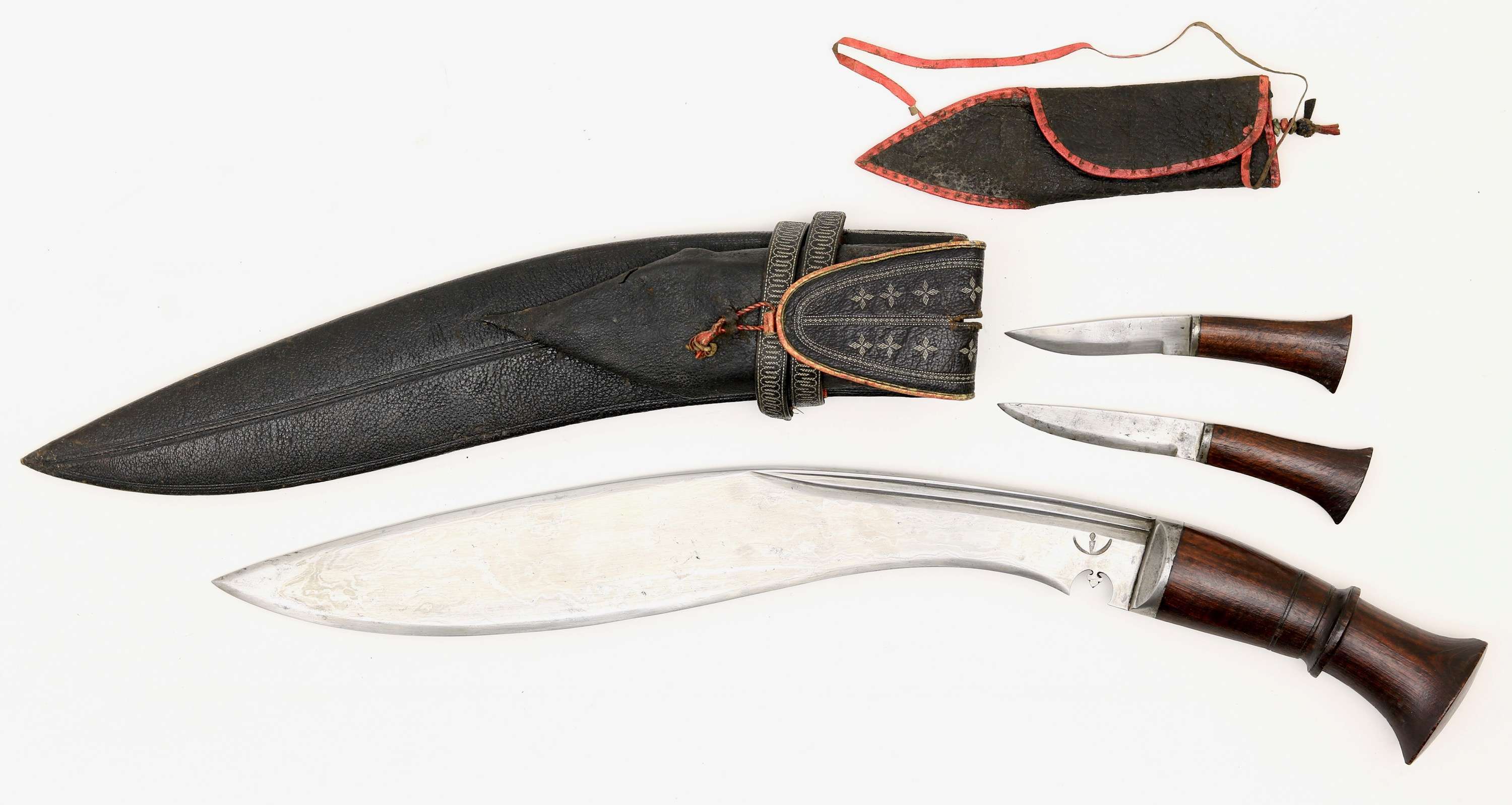 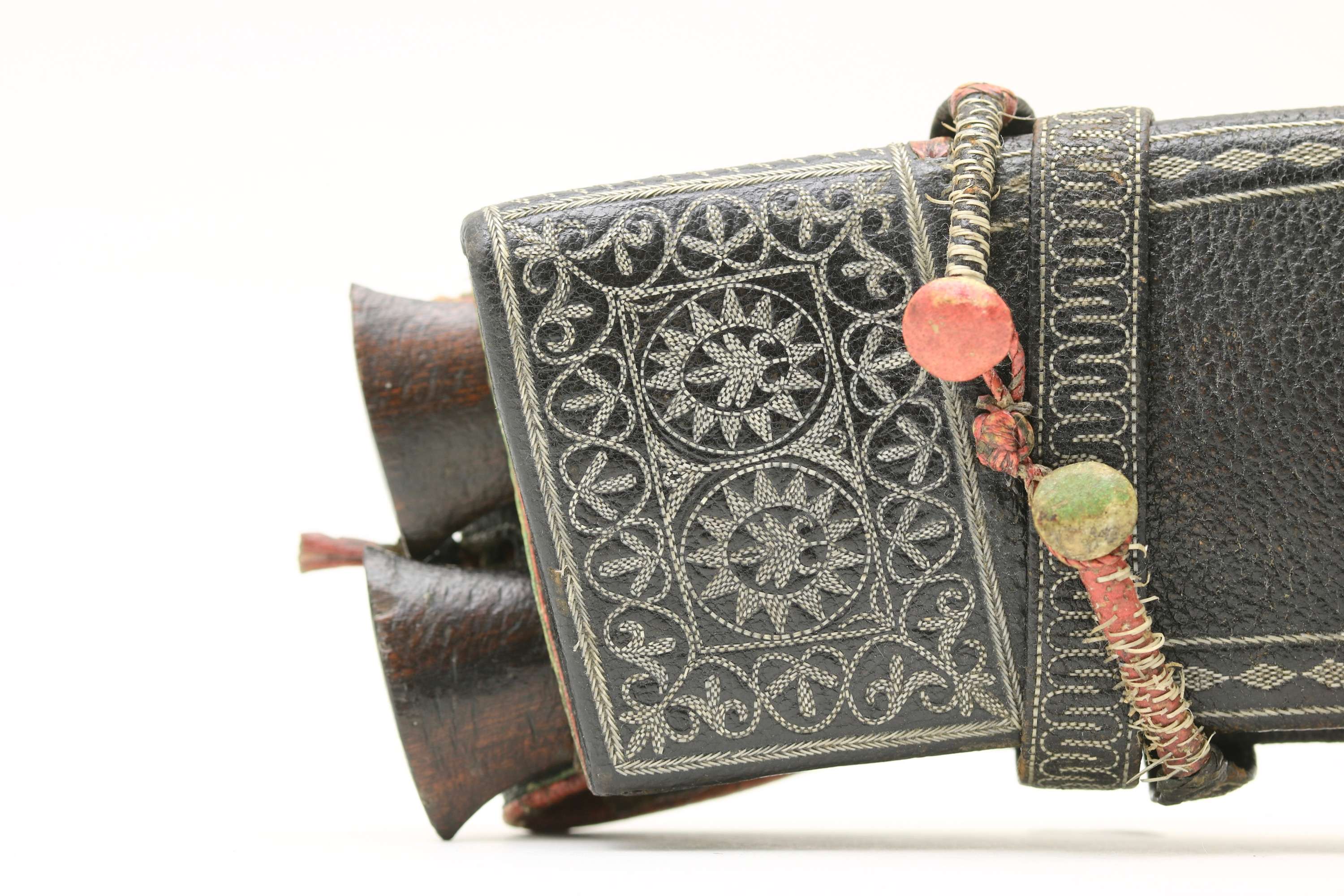 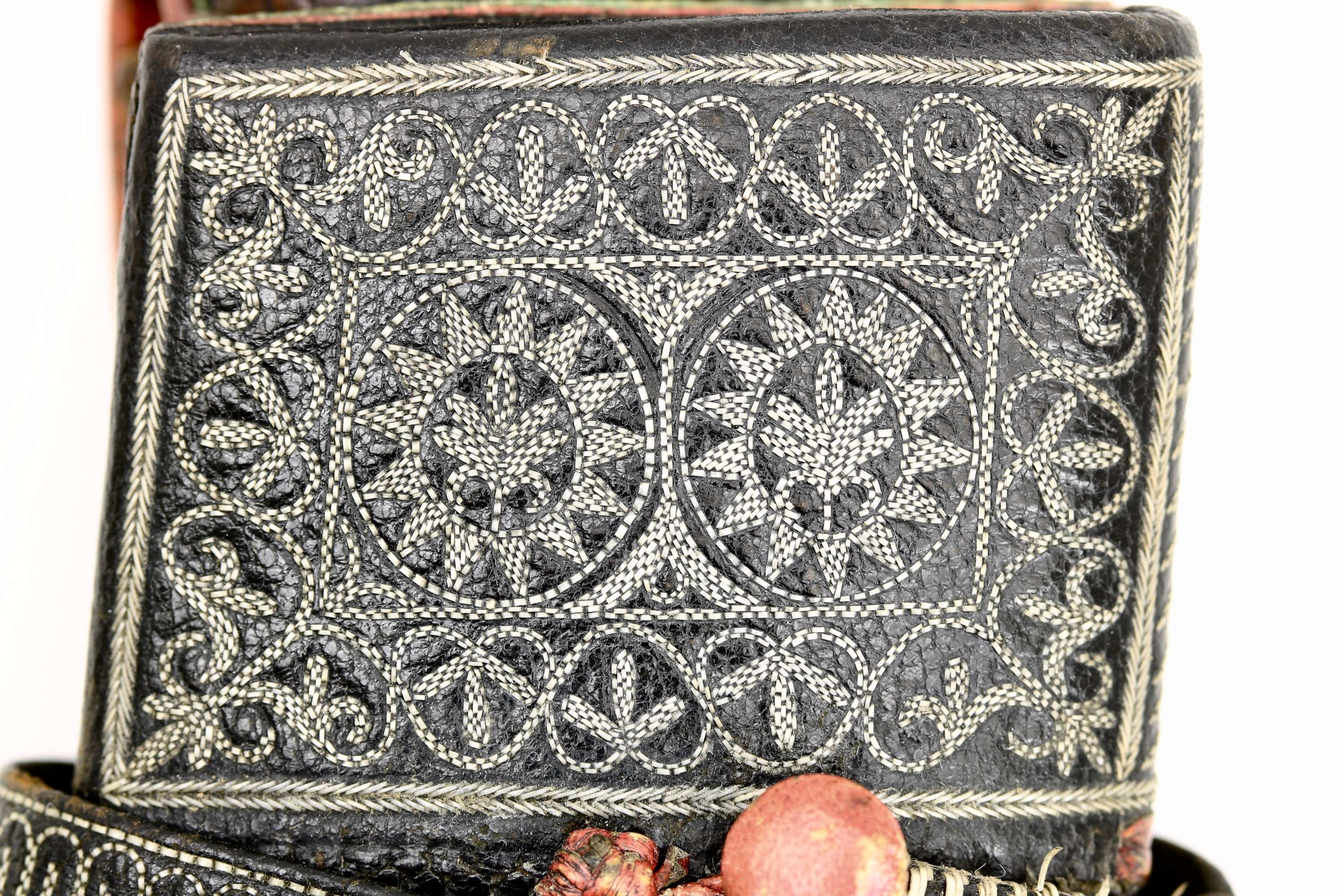 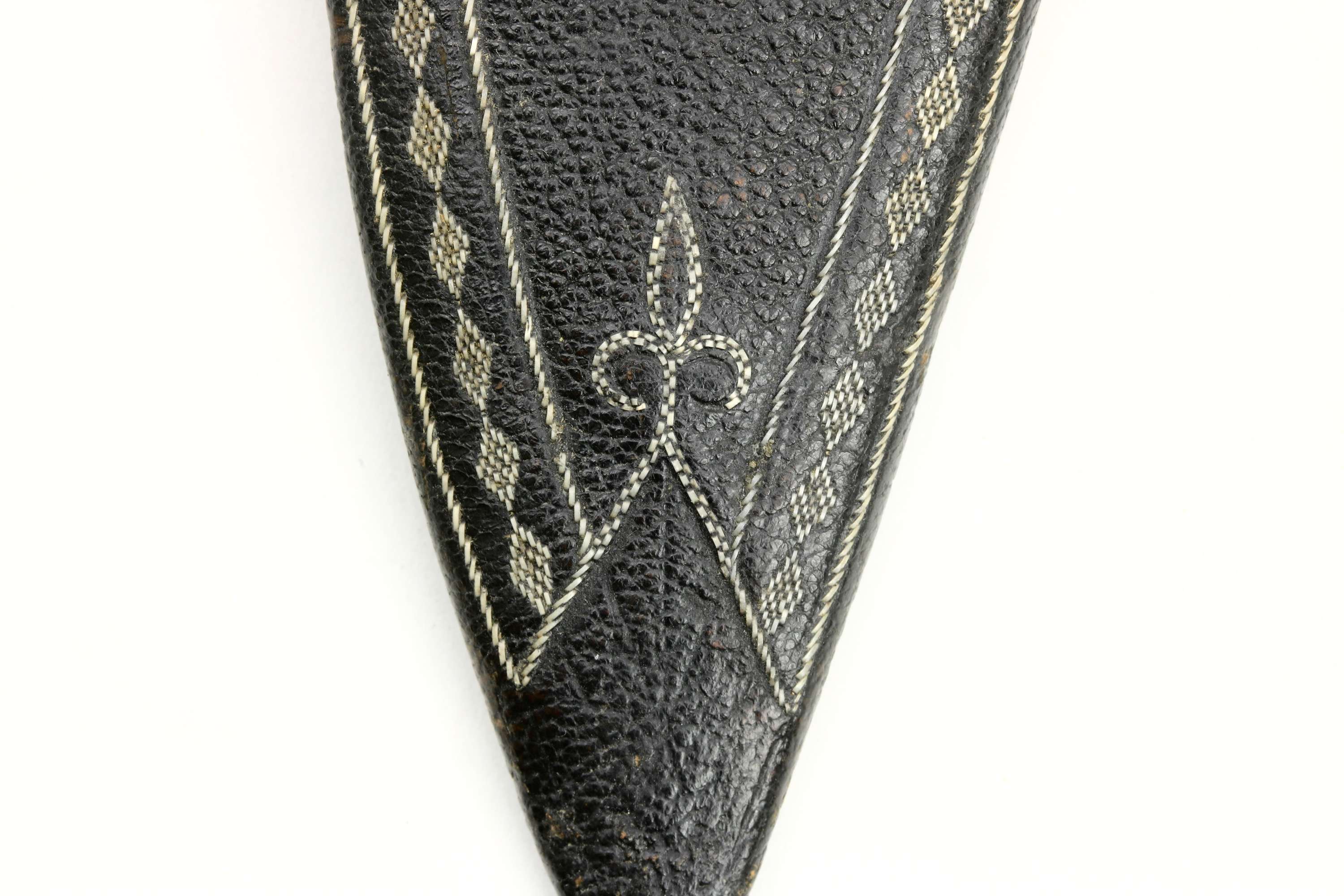 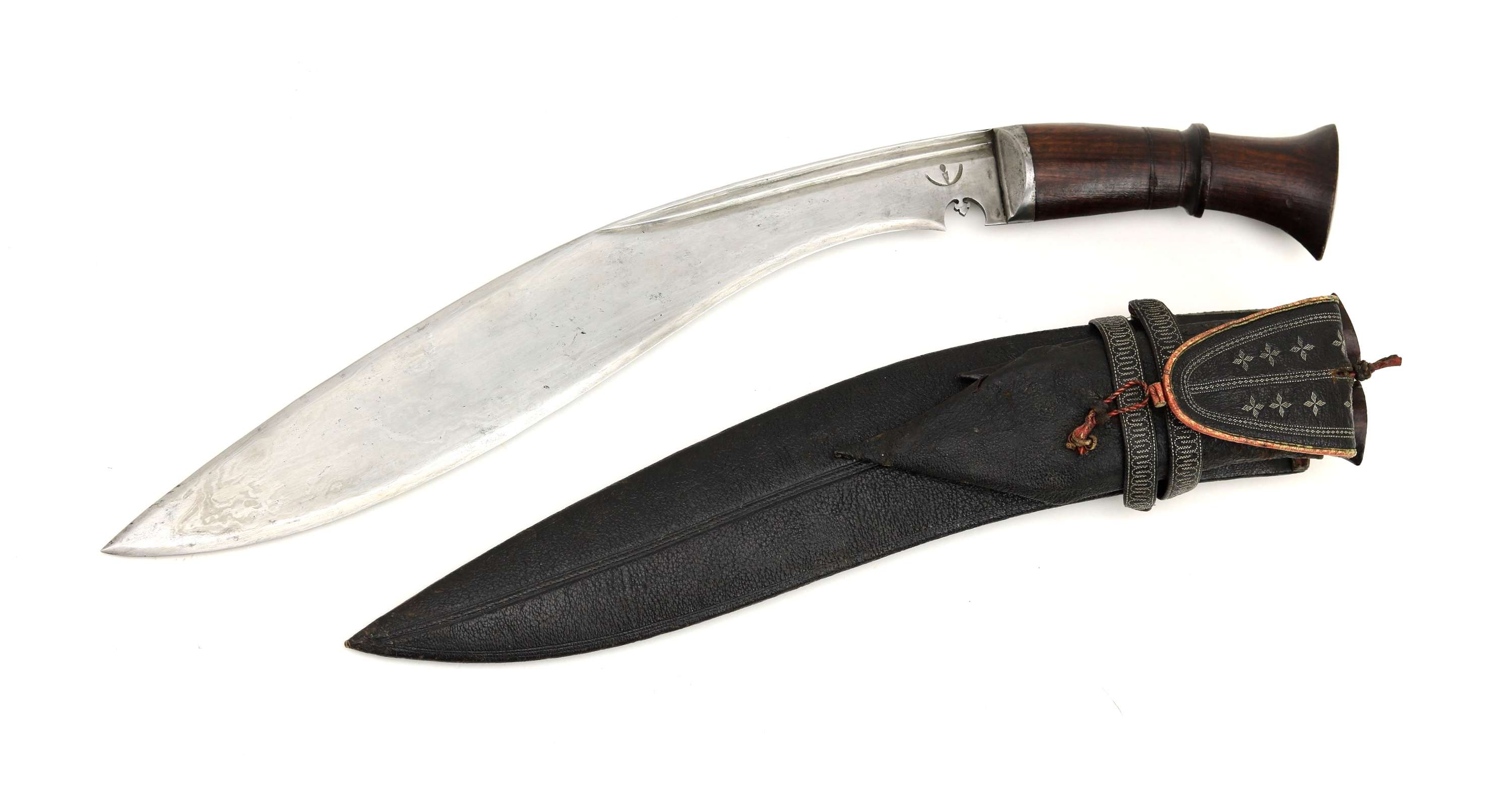