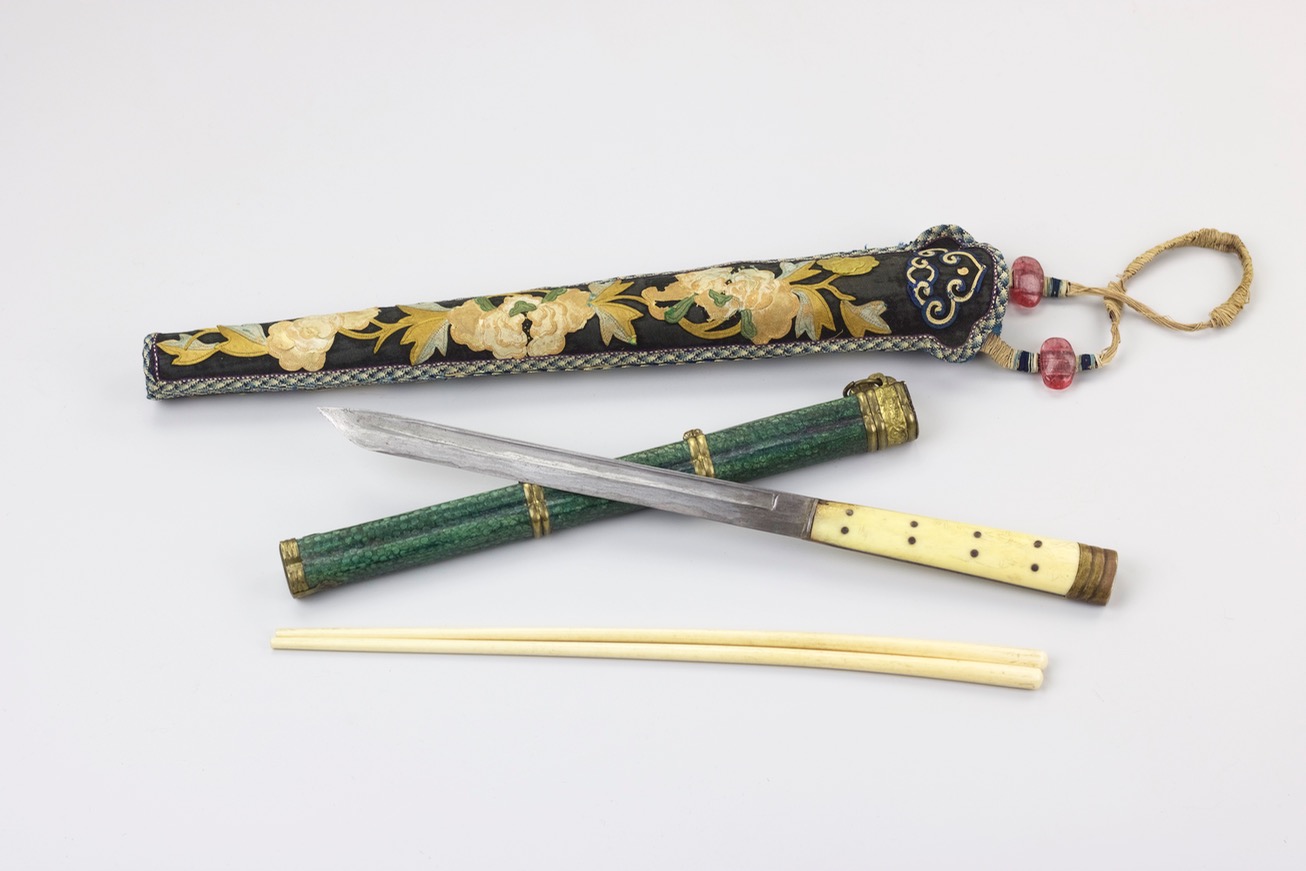 Sets with a knife and chopsticks -and sometimes some other utensils- were common all over the Qing empire. The various cultures that coexisted within this realm gave their own twist to the design. Under the Qianlong emperor, the wearing of these sets became mandatory for all Manchus and Mongols. The rationale was that these knives facilitated the traditional outdoor style of meat eating, cutting it straight from the bone. This was in contrast to the Chinese method of eating, where the food was pre-cut into bite-sized pieces that could be eaten with chopsticks. In an attempt to preserve the rough outdoor nature of the Manchu and Mongol lifestyles under the Qing, it became illegal for them to have their meat pre-cut. And so, all Manchus and Mongols were required to wear these trousse sets to eat their meat in a traditional way.

This trousse set comes in an emerald green ray skin covered scabbard that holds the knife and two bone chopsticks. The bronze fittings still have some of their original gilding intact. The knife consists of a quality piece of steel with clear lamellar structure with a hard high-carbon edge coming out of softer layers of iron and steel. It is not overly sharpened like many of these tend to be.

The bone handle is carved with floral motifs on one side, and the other with a figure of the Daoist immortal Han Xiangzi. Among his supposed abilities were the gift of being able to make flowers bloom instantly (hence the flowers on the reverse side of the handle) and he was able to soothe wild animals. The latter might be quite handy when traveling back in a time when nature was still winning, and many dangerous animals roamed China freely. Han Xiangzi is also the patron saint of musicians.

The knife comes in a silk carrying case that is normally used for fans. A few of these fan cases with trousse were published in Henry Moser's fine catalog, giving the impression to collectors in the Western world that they belong together. They were quite likely paired by sellers, in China or the western world, to make an appealing package instead. 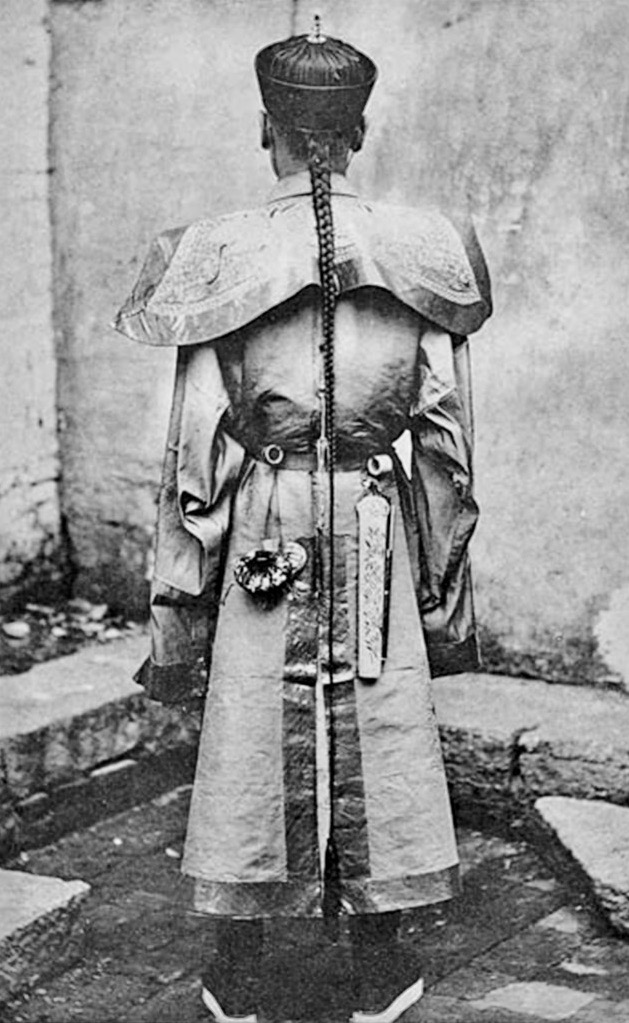 A Chinese official in Guǎngxī, Southern China, wearing a trousse next to a fan-case.
G. Taupin et Cie publishers. Hanoi.

Today, fan cases are highly sought-after by themselves. The black case is decorated with a fine patchwork of flowers in various colors of silk. The rim is intricately woven in white, blue and light blue. One side of the case has a cord with two pink glass beads. The string, however worn, retains the original white, blue and light blue wrappings. These wrappings are typically seen on pouches and sword lanyards associated with the imperial court in Beijing. At the fall of the Qing, many former officials didn't know how fast they should get rid of all their court attire so in the 1910's former imperial textiles could be bought cheaply by foreign travelers.

Some losses to the silk case, including some loose seams and a missing bottom, as can be expected from a practical item that is well over a century old. The knife in very good condition. No over-grinding on the blade, a small loss on the bone handle, as shown in the picture. Scabbard in excellent condition, no losses to the ray-skin.

A very nice example of a Chinese trousse set, of good quality and in excellent condition. It comes in a rare old silk fan case, the workmanship of which suggests it was used by someone belonging to the Beijing elite of the late Qing.