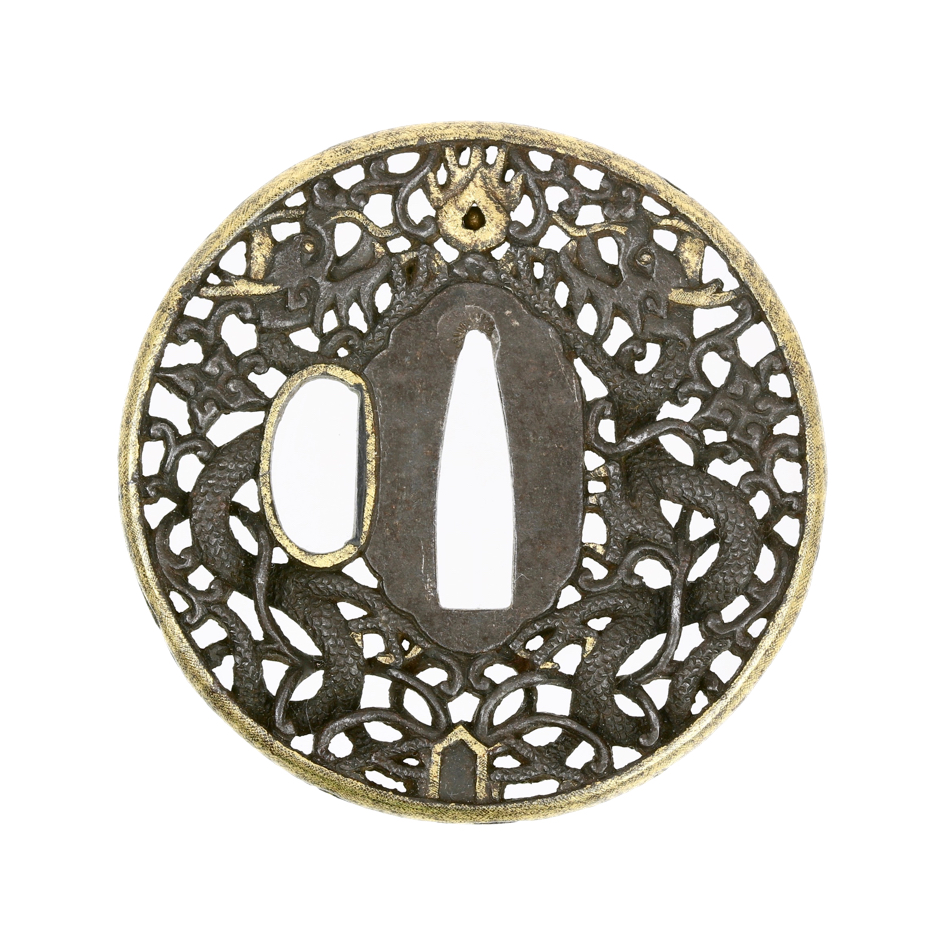 Many Asian export sword guards, and later Japanese guards inspired by them, were modeled after the archetypical Chinese sword guard that was imported into Japan in some quantity in the 17th and 18th centuries. Such pieces were called Canton-gata or "Canton form", named after the port from which they seemed to come, although the type almost certainly originated in the north, Beijing and possibly even Shenyang. Among collectors nowadays the term "Canton tsuba" is common. A Chinese sword guard of the 17th century.
The mother of the entire genre of kwanto-gata or "Canton-form" tsuba.

A small and rather finely made Asian export sword guard. It pairs facing dragons that both reach for the same pearl. The pearl is cut loose from its surroundings, being able to move freely in its tiny compartment. At the base, between the two tails of the dragon is a rock, representing a sacred mountain. This is a motif most commonly seen on textiles, most notably Chinese official robes worn by the emperor, his officers, and mandarins. On either side is a stylized swastika, auspicious symbols in Asia.

The dragons are beautifully rendered with three-dimensional bodies moving through tendrils, undercut in no less than 12 places. Like the preceding guard it, too, was made with an aperture (hitsu-ana for the Japanese by-knife carries in the same scabbard with the sword, indicating that it was most likely also intended for the Japanese market.

A previous owner had a small shakudo lining added to one side of the opening, probably to make for better alignment with the scabbard he was using it with.

The delicateness of the carving suggests it was perhaps made in Galle, a VOC owned "factory" in Sri Lanka. They were probably commissioned to be taken to Japan as gifts.