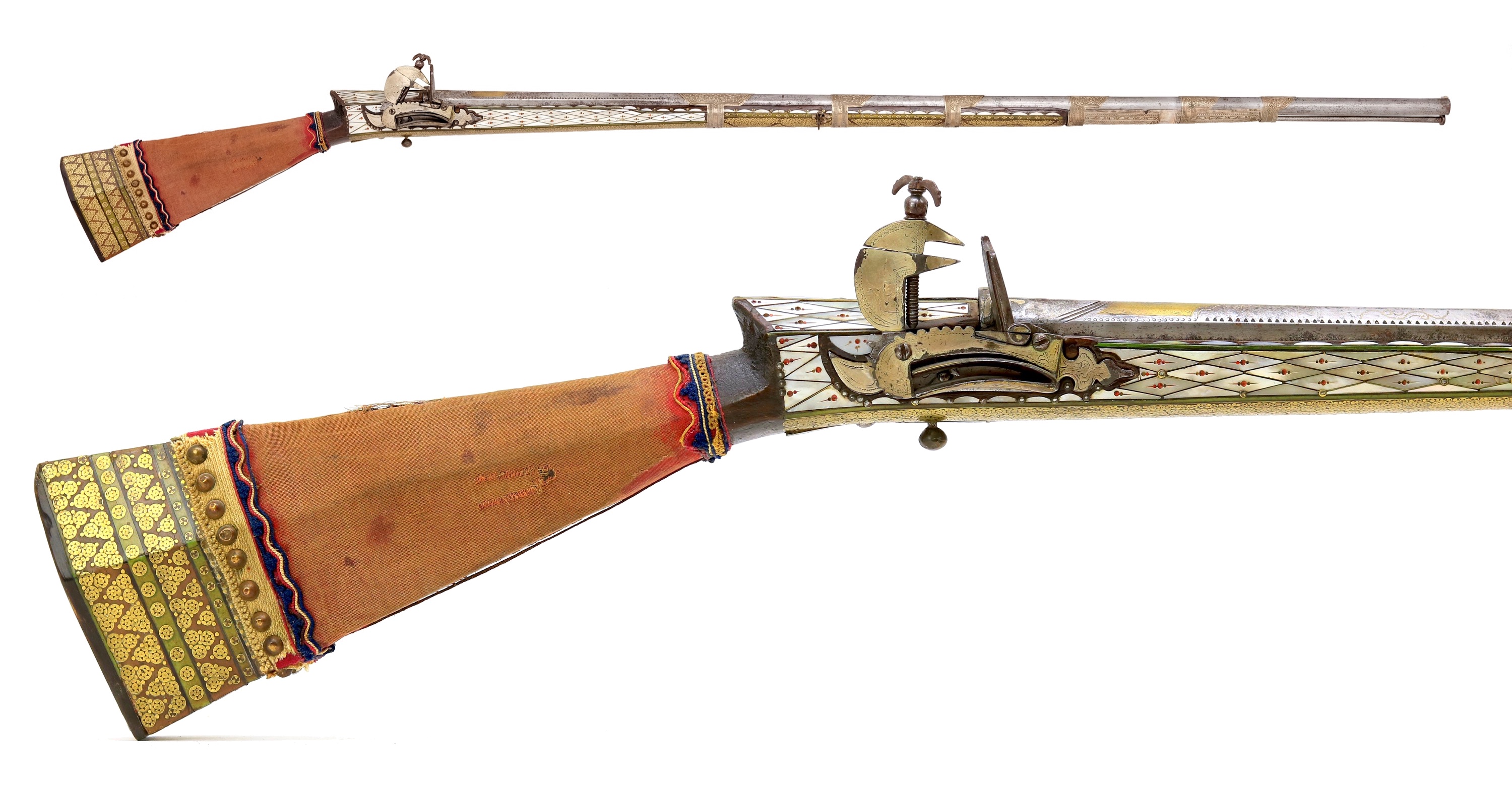 Paragun refers to a a fabric with a golden strip sewn to it. It was used at the medieval Byzantine court where it was called paragandama, by the 19th century the word became known in the Venetian dialect as paragòn.1 It became the name of a type of gun that commonly had a stock covered in this fabric.

Elgood writes of the cheapness of execution of these guns, something I have not seen represented in the actual examples I have studied. He suggests the fabric covering was a cheap way to not have to decorate that part of the stock, but then one wonders why, if saving time and materials were an issue, the entire underside of the gun in this article is inlaid with golden stars.

It is unclear exactly where these guns were made, but the mother-of-pearl inlay work frequently seen om them is much like that found on the džeferdar of Boka Kotorska and Western Herzegovina although on the paragun the work is consistently finer in execution. Likely places of manufacture are Bosnia, Bulgaria, and Romania.

Other than the characteristic fabric-covered stock and mother-of-pearl inlays, what defines these guns is a unique version of the miquelet lock, called boĭliya. ("бойлия" in Bulgariam). Often written boyliya, it is frequently used to describe the entire gun.

Boĭ means "battle" and boĭliya literally means "gun" or "a tall handsome man, a warrior".3 This peculiar lock was based on the patilla style miquelet, but with a very characteristic form with a rounded fin at the back of the hammer for added strength in this part.

Most signed and dated paragun seem to date from the early 1800s up to the 1840s and they seem to come with a variety of barrels from local productions to Russian, English, Ottoman Turkish and Italian barrels, again indicating that whoever consigned them had considerable means.

A rather fine specimen. The barrel is a local Balkan type, octagonal at the breech, going to round near the muzzle. It has a Turkish style valley sight aligning to a bead at the end of the barrel. There is a maker's stamp at the breach, overlaid in brass. The barrel is further decorated with brass and silver overlays, engraved, and areas with arabesques in true inlay.

The barrel is held to the stock with 6 barrel bands (capucines) of a silver metal with a slightly reddish hue. They are finely chased and chiseled with arabesque motifs.

The stock has a buffalo horn buttplate and a lower section decorated with strips of horn, bone plates dyed green, and khātam inlay work consisting of inlaid cross-sections of composite rods made with horn and gold. Khātam originated from Persia but became very popular on Ottoman guns.

The midsection of the stock is covered with worn velvet, with a golden metallic strip at the underside, similar to that seen on sword and dagger scabbards from the Ottoman Empire to north India.

The area around the breech is entirely inlaid with mother of pearl plates of lozenge shape. Each plate with dimples and lines that are filled with red pihment. Very thin gold strips divide the lines between the mother-of-pearl-plates, and each corned is lined with a green strip of bone. On the reverse of the lock side, some of the plates are made of horn, to deal with the compression of the screws that hold the lock.

Further up the stock the decoration consists of a combination of mother of pearl, bone strips inlaid with khātam work, and the final section of the stock is covered with silver plate worked in repousse.

Most of the underside of the stock is done in fine khātam work, the base being covered in its entirety, and forming a pattern with curved lines of exposed wood further up.

The slot for the ball trigger is reinforced with a green-dyed bone plate.

Comparables are quite rare, but there is a nearly identical boyliya paragun in the Tareq Rajab Museum in Kuwait. It was probably made in the same workshop, by the same hand, and represents the best of the four boyliya paragun this museum has in its collection.

In very good condition. Lock in good, working order, barrel without significant corrosion. There is a repair to the underside of one of the barrel bands, some minor damage to some of the bands and to the silver plating near the end of the stock. Velvet on the stock is worn, and some damage to the fabric. Inlays are almost 100% intact, with only the exception of some pieces near the peg that holds the barrel to the stock. See photos.

A rather fine example of one of the rarest of European guns, in very good condition. The gun shows a mix of stylistic influences from Europe, the Ottomans and Persia. The craftsmanship, and especially the work in mother-of-pearl is very well done. 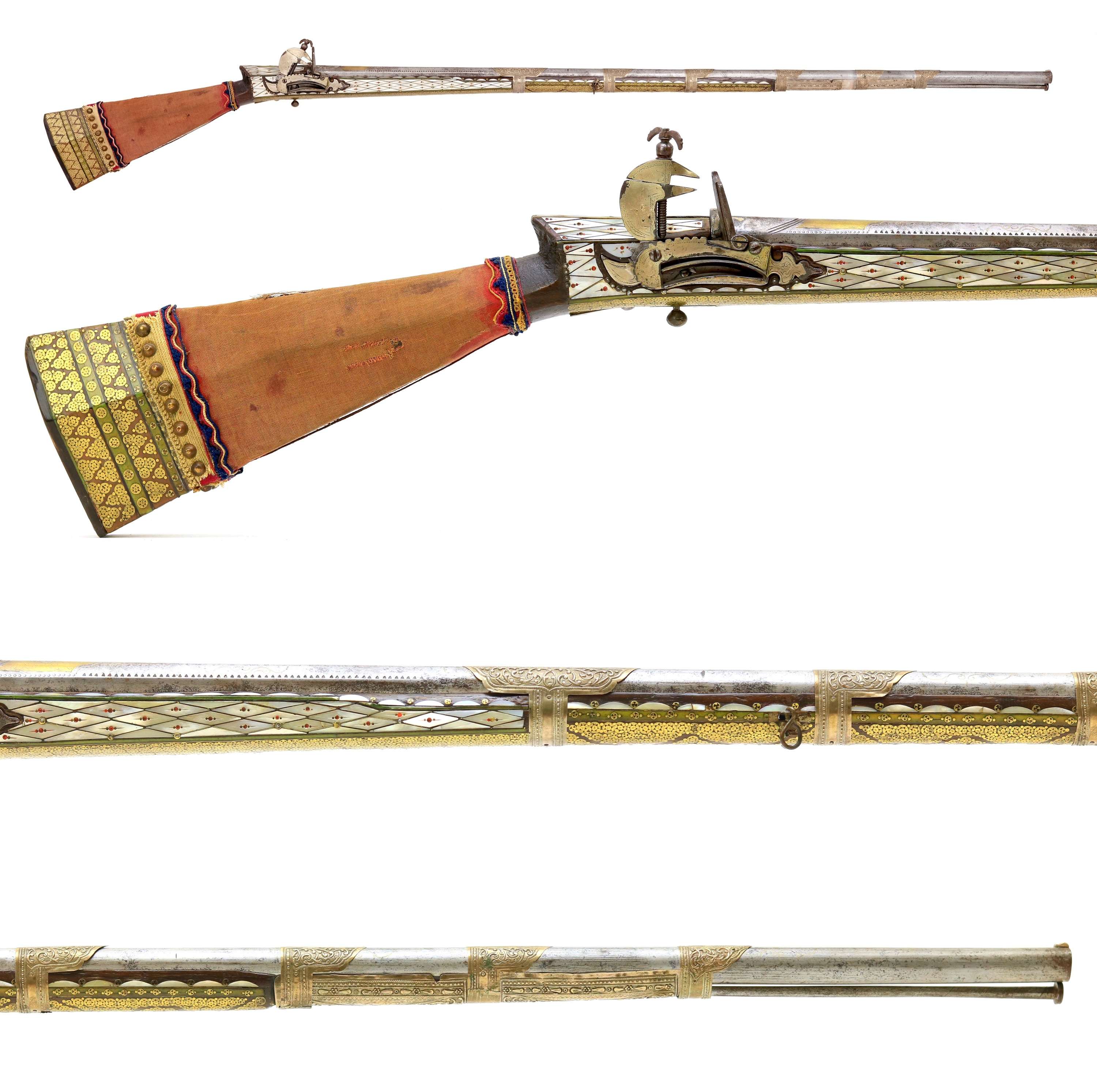 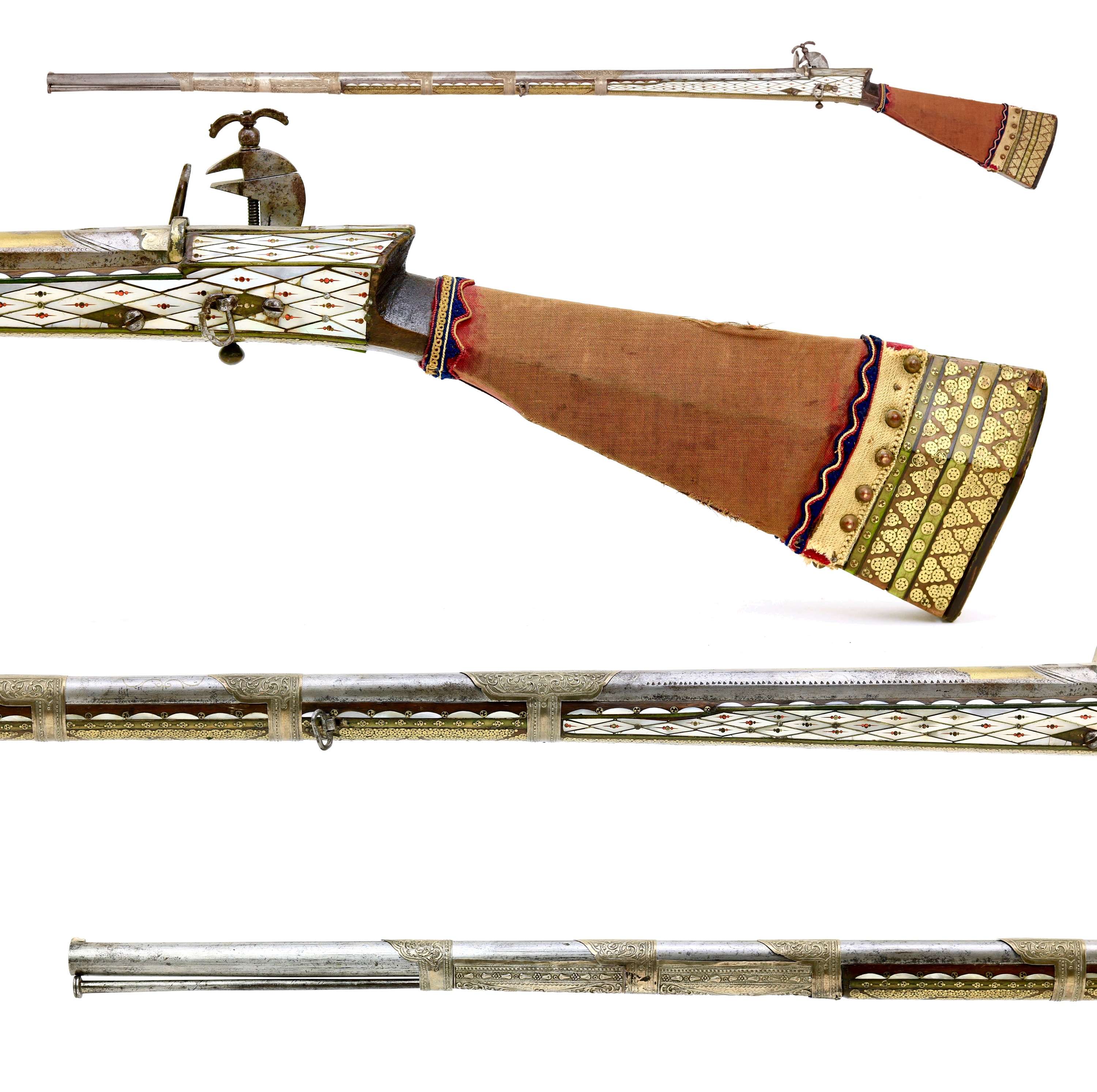 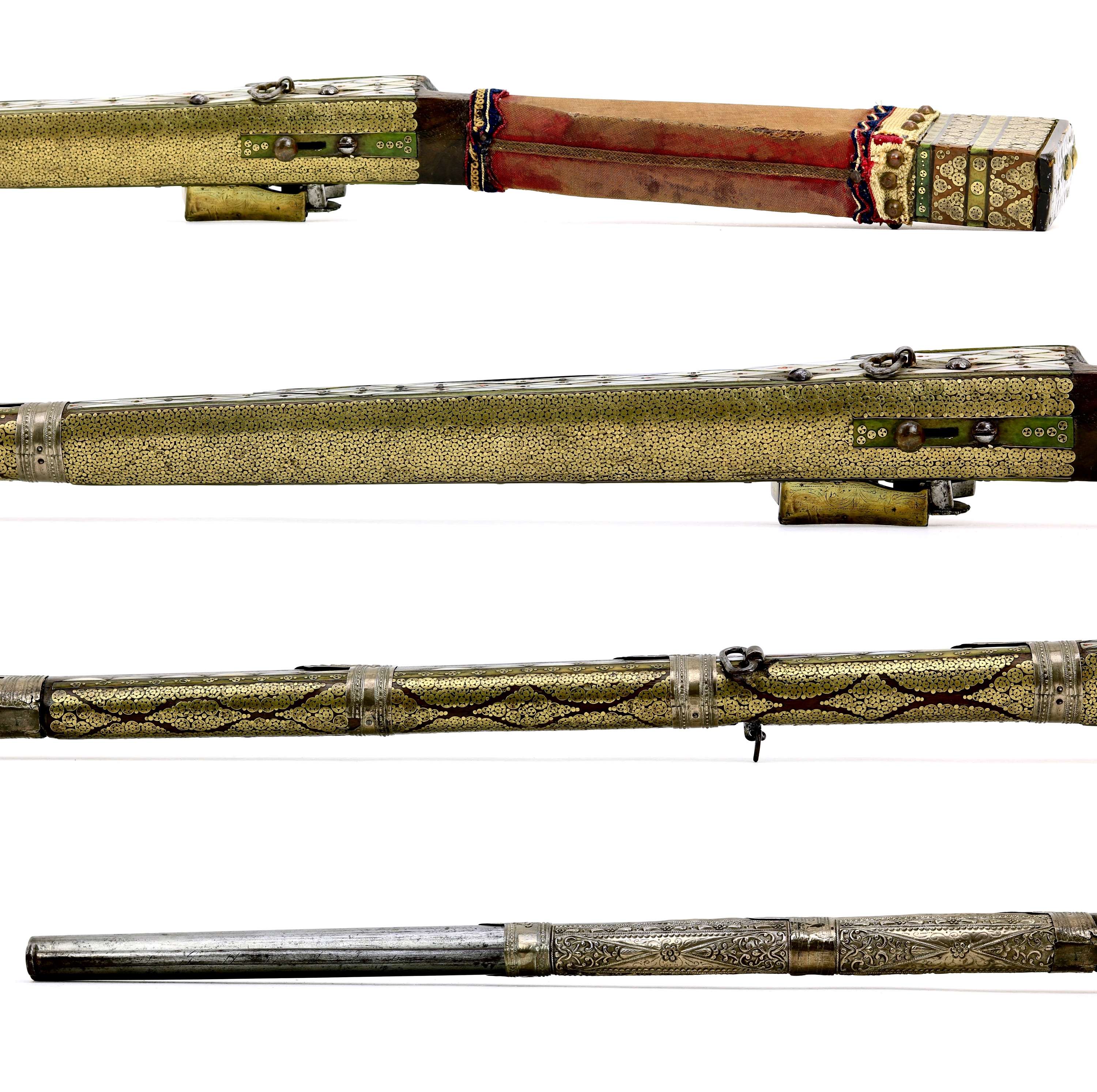 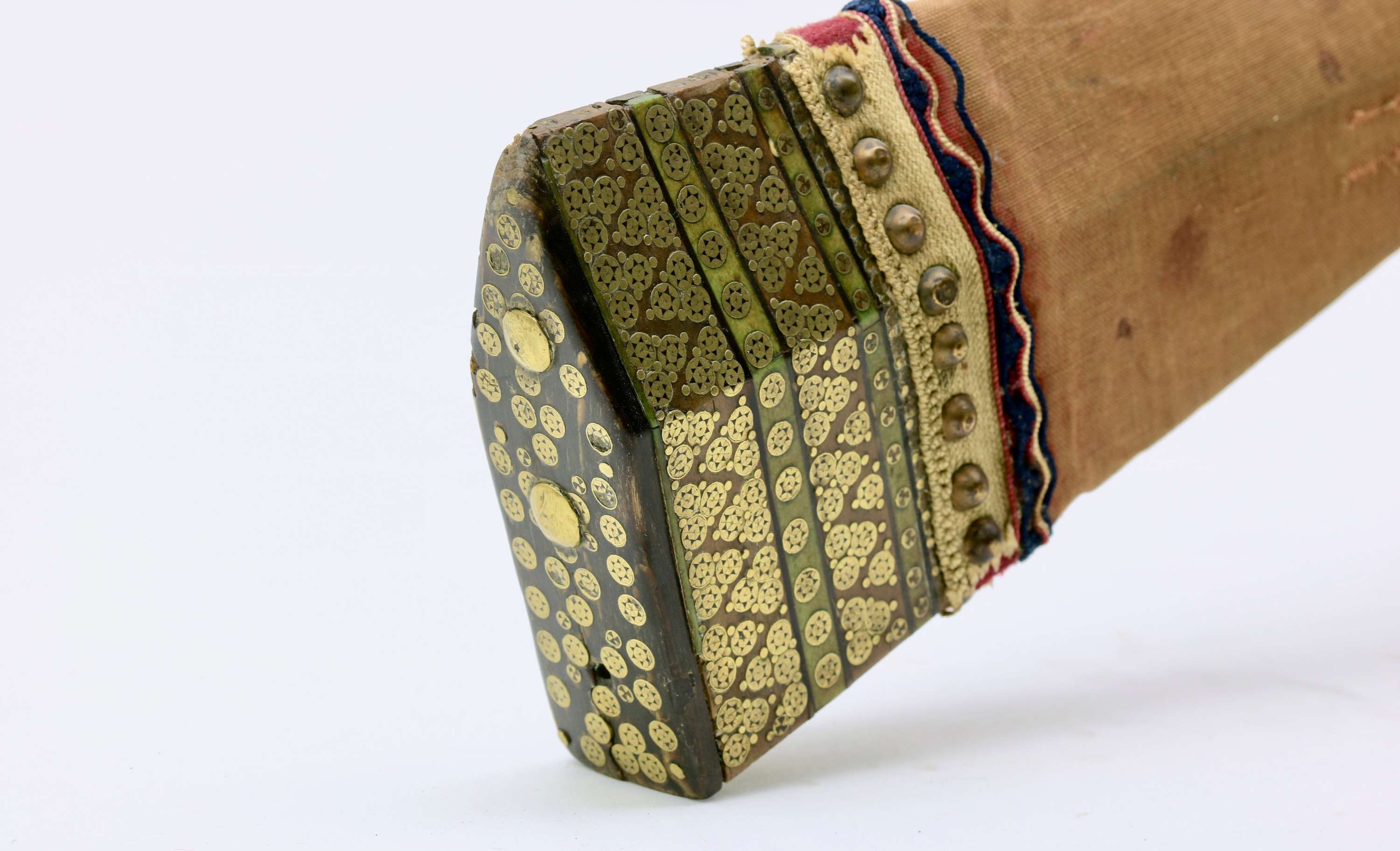 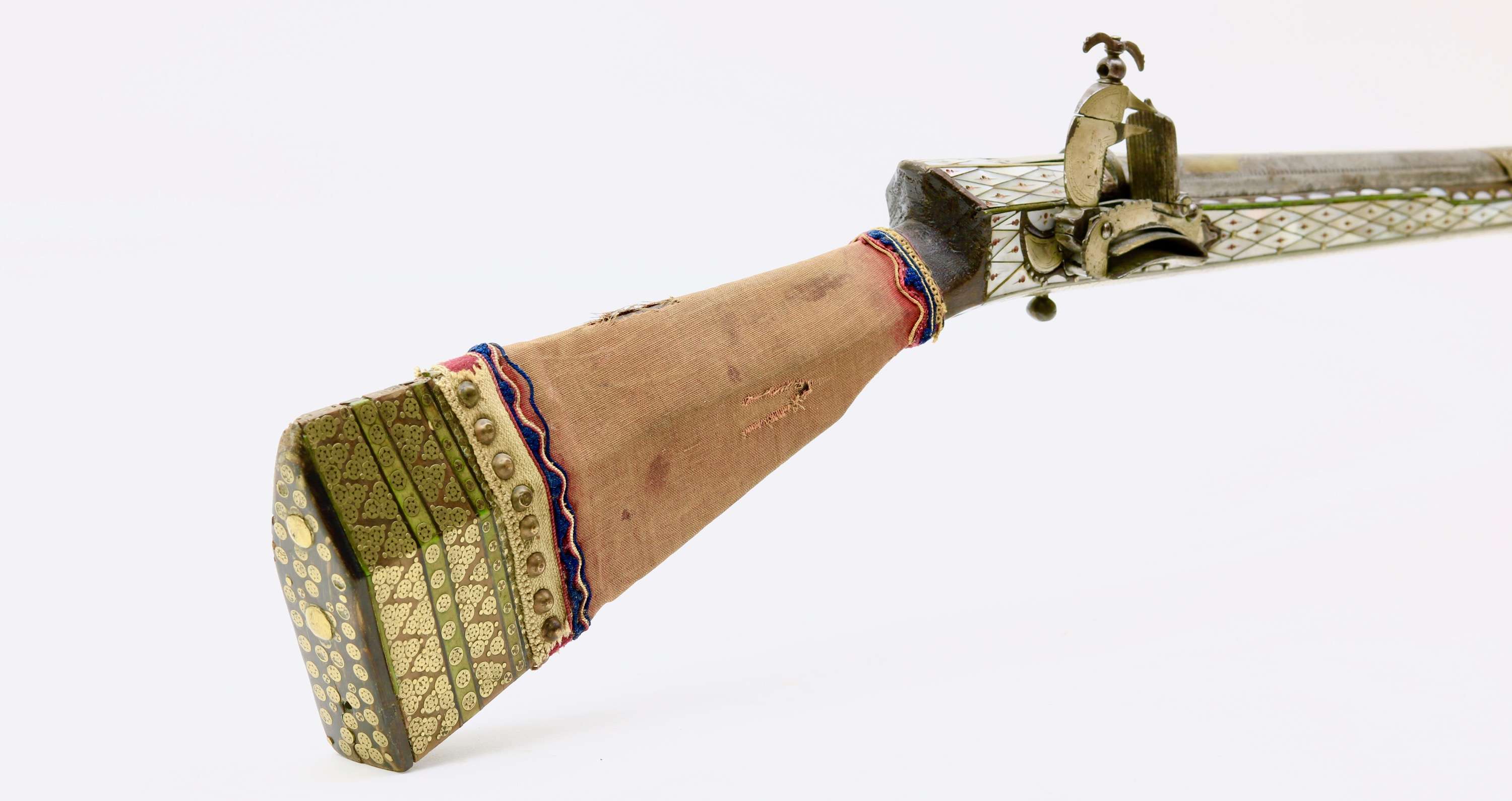 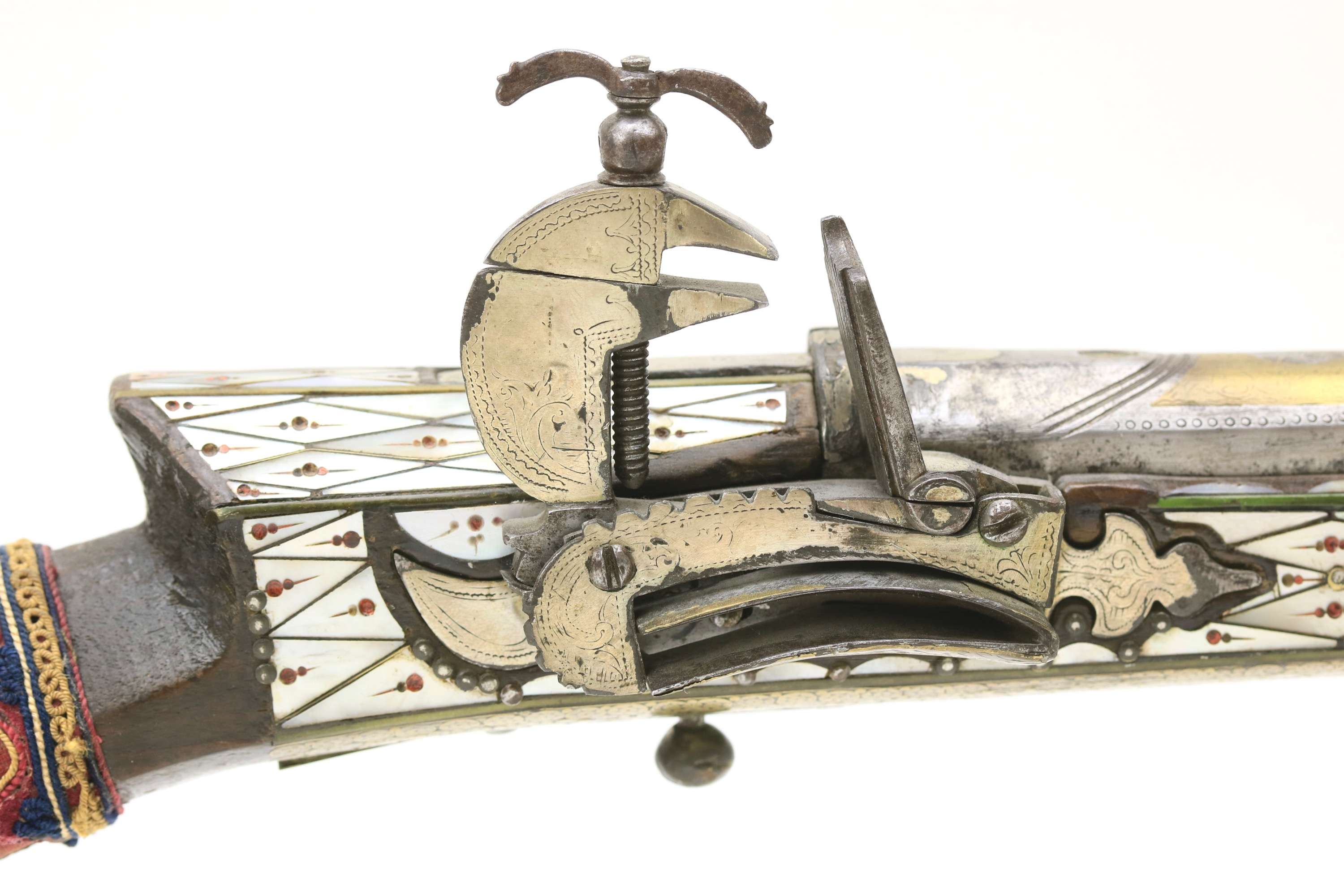 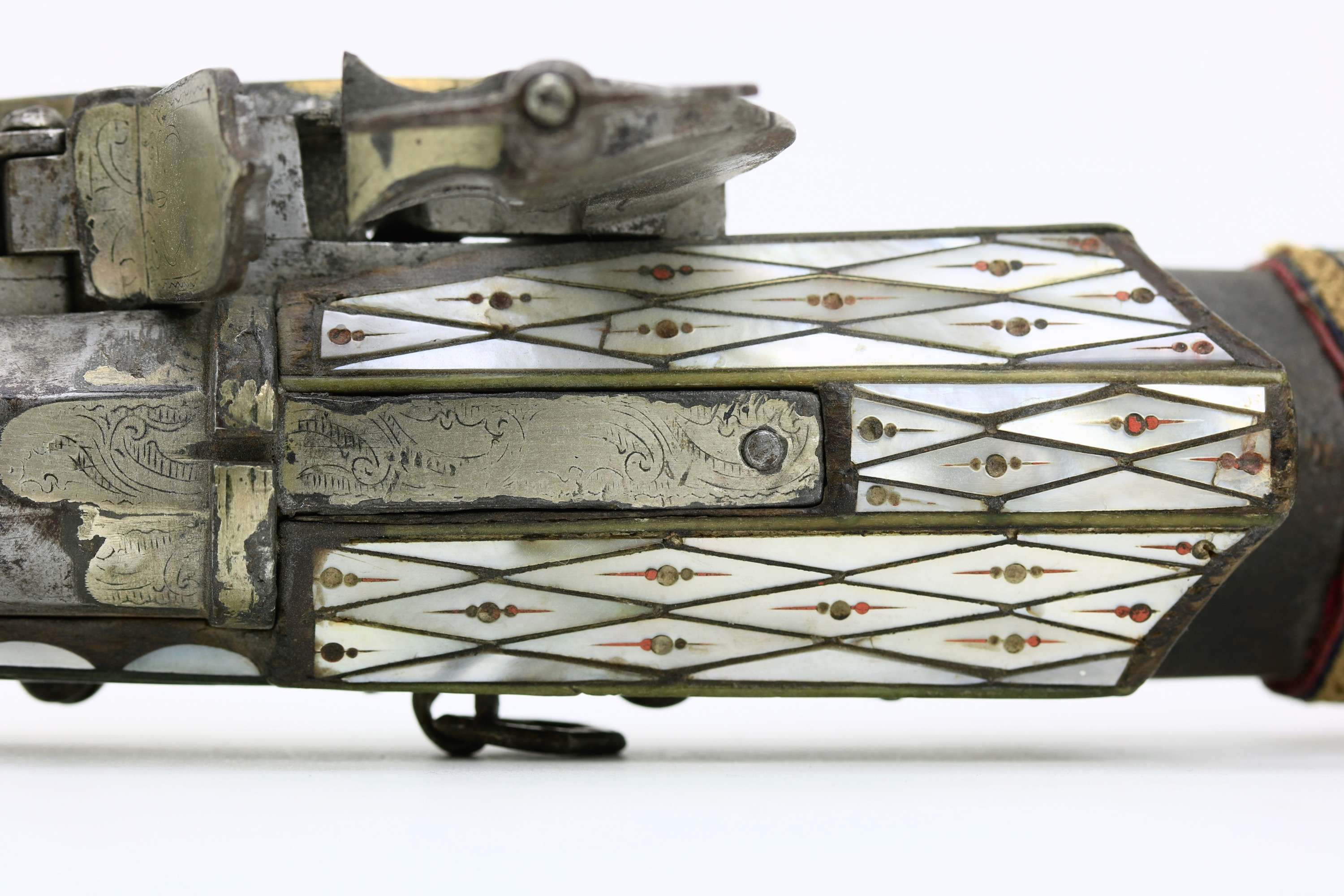 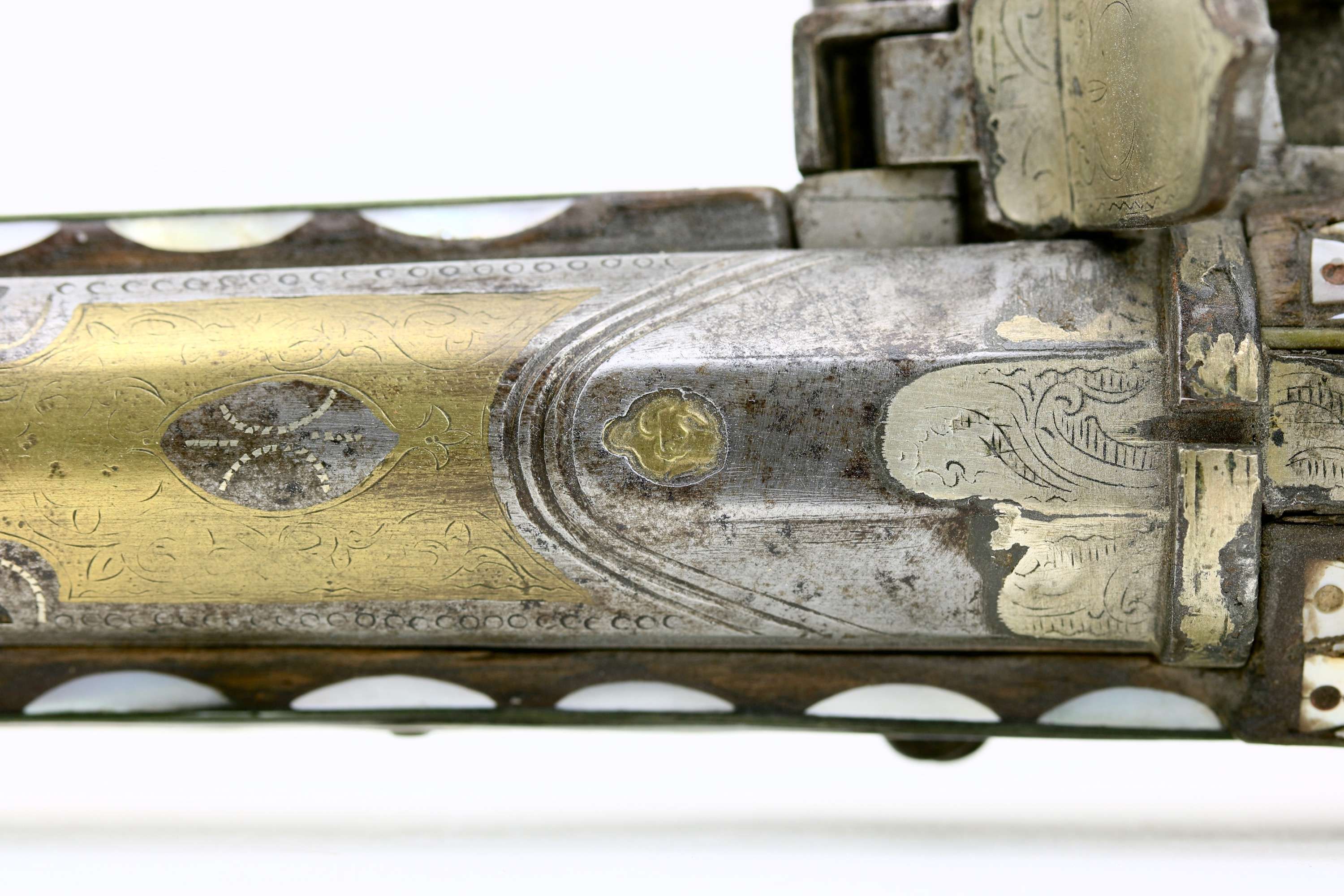 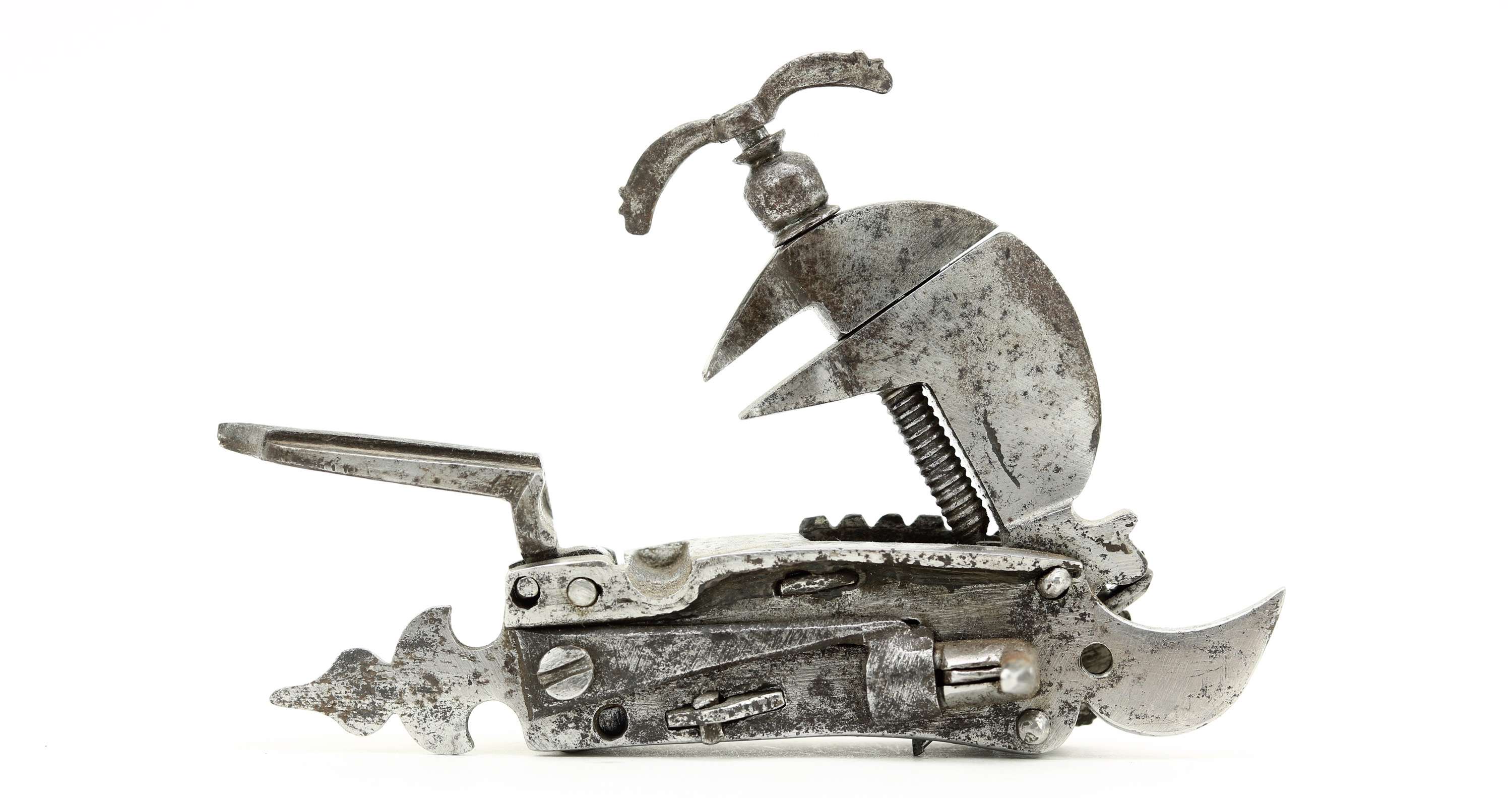 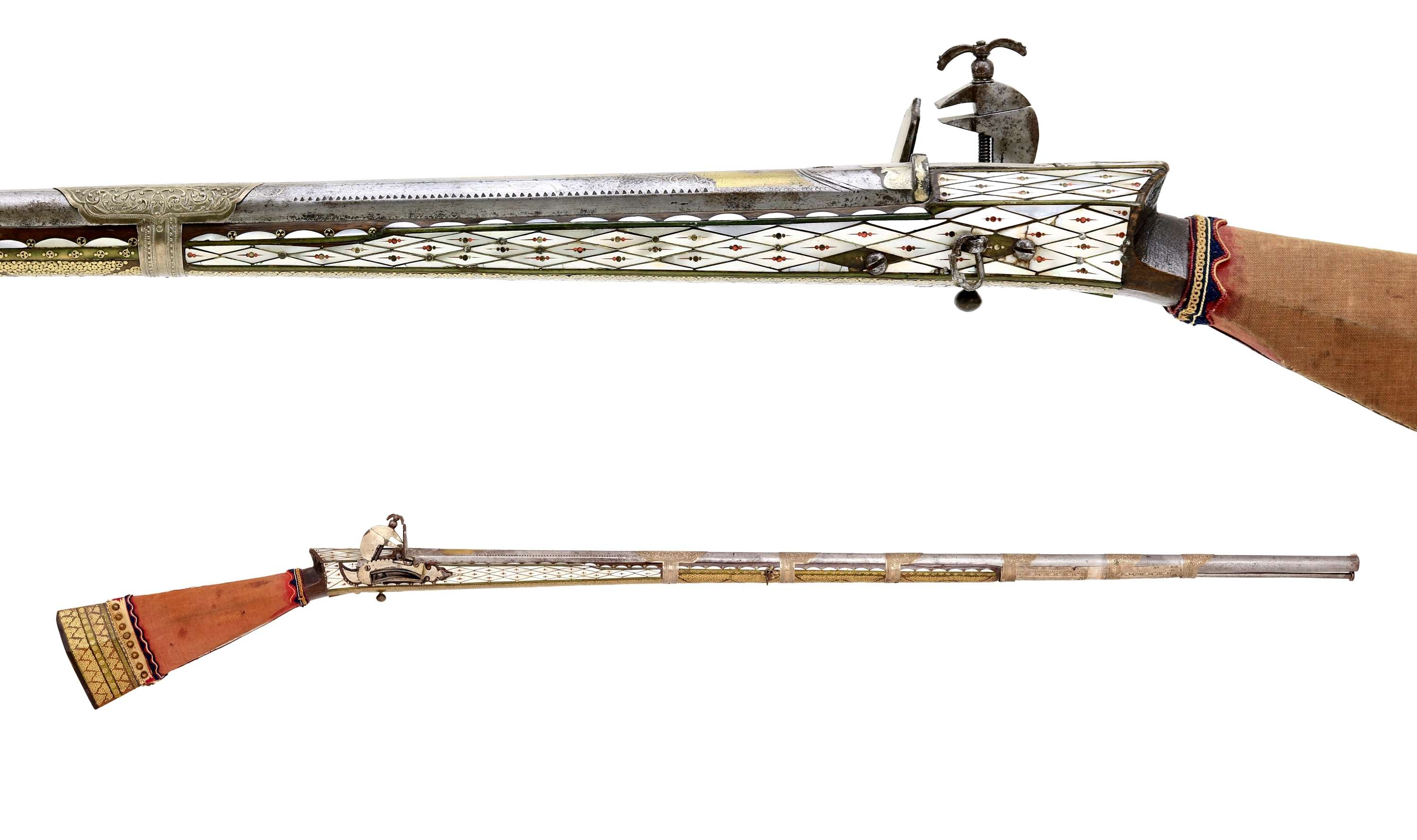