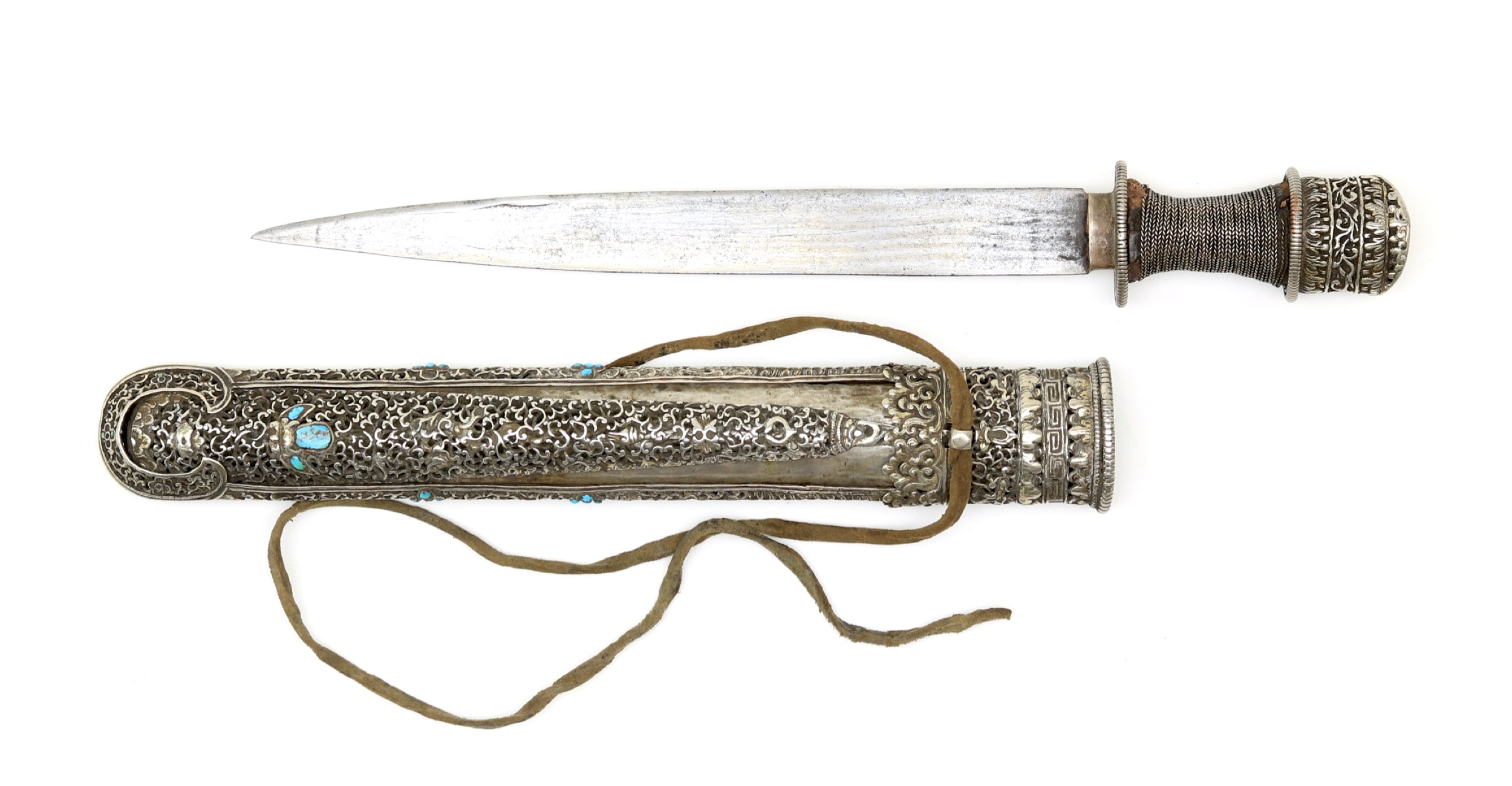 A small group of very fine Bhutanese daggers is known that all follow a fairly similar pattern. They tend to be quite small, and their scabbard follows an older Tibetan pattern with a U-frame that holds two wooden scabbard parts and a richly decorated, often triangular centerpiece.

A rare, early Tibetan shortsword with a similar scabbard configuration.
Sold by Mandarin Mansion in 2017.

They tend to be more elaborate than the better dozum, like those worn by the retinue of the Bhutanese king.1 Blades are always small and vary from traditionally forged and shaped to thick and narrow needle-like blades.

The construction of these daggers may hint to their purpose. Bhutanese dagger scabbards are usually relatively plain because they are worn tucked into the clothing, and only the pommel would show. The pommels are often elaborately pierced and gilt on the better examples.

In this group, the pommels are usually relatively plain and it is the scabbard that is most elaborately finished. So I tend to think that they were perhaps presentation pieces, made to serve as gifts, and meant to be seen.

The blade is of traditional form, gradually tapering to a sharp point. It shows so-called "hairpin forging", a technique where rods of different types of steel are first stacked and then the resulting bar is folded back on itself. It is a method that creates a sword that combines properties of toughness and hardness while using a method that uses less fuel than the forge folding methods of neighboring cultures.

The hilt is of classic Bhutanese form, with a very small grip section wrapped with braided silver wire. It sits between two ribbed washers like also Bhutanese swords have. The large pommel is made from thick silver sheet, pierced and chiseled.

The scabbard consists of two strips of bamboo that hold the blade, flanked by two silver plates. The plate in the back is very thick and heavy, curiously weighing 122 grams alone. The front plate is covered by a thick triangular piece of silver that was elaborately pierced and chiseled with symbols from tantric Buddhism, and a dragon slithering through the foliage. It is beset with three turqoises that probably represent the three jewels; the Buddha, the Dharma and the Sangha.

The whole is held by a u-frame which is also elaborately pierced and chiseled and beset with turquoises. The frame is held tight at the top by a thick silver throat piece with decorative bands of openwork, lotus petal borders and stylized thunder patterns.

Good condition throughout, no significant damage. One turquoise is missing from the left side of the u-frame, and some small ones from the bottom section.

The blade is not a perfectly secure fit in the scabbard and I think that the bamboo slabs used now are an old replacement for what once was a wooden core.

The work on the scabbard is significantly better than on the pommel, making me wonder whether the dagger itself may also be a later match.

The Wallace Collection is in the possession of a somewhat similar piece, especially the scabbard, accession number 1684. It was purchased in the 19th century and cataloged as being of the 16th century. I think this reflects the clever sales pitch of the vendor at the time, and less so its actual age. 18th or 19th century seems more reasonable.2

A nice example of a fine Bhutanese dagger with a heavy silver scabbard that is meticulously pierced and chiseled, and further embellished by turquoises. It is part of a small group of comparable pieces, some collected in the 19th century.