Narrowest at base 31 mm

Nepal. Probably made in India.

A medium-sized khukurī with some unusual features.

Pommels on khukurī are usually made out of the same material as the rest of the hilt. Smetimes we see the combination of two natural materials, such as wood and ivory. In this case, the pommel is made of a piece of sheet brass that was joined on one side with a dovetail connection, the pommel plate being brazed on. The wooden part of the handle has lozenge shaped bone inlays.

The base of the blade has ornamental grooves and dimples that resemble the work done on very high-end khukurī of primarily the early to mid 19th century. On this example, the work is best described as "good from afar, but far from good."

But you can't blame a man for trying: Whoever did it was obviously charmed by these marvellous earlier khukurī, but lacked the time, skill or other resources to match that kind of work. 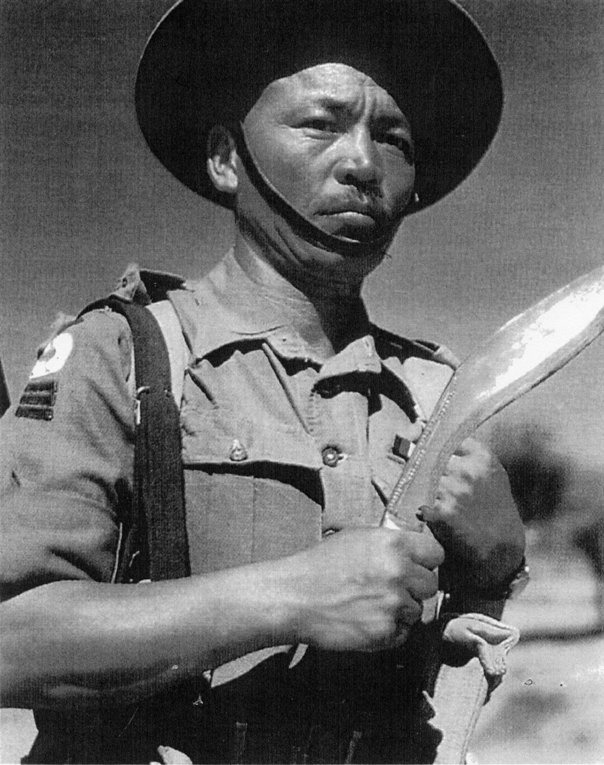 A khukurī with similarly decorated spine in the hands of a Gurkha soldier.
World War 2.

Blade has some damage from contact and corrosion. Scabbard open on one side. Pommel dented. It is what it is. See photos.

Despite the indifferent workmanship on the attempts of decoration, the piece has a sturdy blade, handles nicely and is by all means a functional khukurī.