The yādāo,（腰刀) literally "waist saber" was the standard side-arm for the Qing dynasty military. It is synonymous to pèidāo, (佩刀) a more classy term often found in court regulations. Those of the soldiers of the Green Standard Army were produced by the state under the Board of Works.

Officers and soldiers of the elite Eight Banners got paid in silver and were required to commission their own sabers from arms smiths. There were strict regulations for materials used -brass fittings for soldiers, iron fittings for officers- but blade style was not so strictly regulated. As a result, there is an incredible variety of Chinese officer saber blades.

A rare Chinese officer's saber of the 17th century. It is built around a very fine blade, of yanmaodao form with a largely straight blade that sweeps up near the tip. The tip section has well-defined raised backedge, part of the backedge is sharp. The blade is of clamshell cross-section with no grooves.

In recent polish by Philip Tom to reveal a tightly layered construction with a wood grain pattern around a high-carbon edge plate which is exposed from the main cutting edges and around the tip. The edge further shows dramatic effects of differential heat treatment, creating lines of shuāngxuě (霜雪) or "frost snow", crystalline structures of the hardened steel somewhat similar to the hamon on Japanese sword. The tip section is through-hardened, showing lines of shuāngxuě following the general layering of the blade.

It comes mounted in classic iron fangshi fittings that are original to the piece; the original peening at the pommel still intact. The mounts are completely covered with silver sheet by means of hammering the silver over a cross-hatched background. Some of the silver has peeled off due to rusting on the background, which is a common occurrence on pieces silver plated in this manner that are a few centuries old. The inside of the guard is decorated with a pattern of interlocking swastikas done in silver wire, most of it remains intact.

The original scabbard retains its black lacquer finish. The suspension bar is of typical early shape, being very narrow in profile with two sudden and pronounced loops. Both the scabbard throat and mouthpiece are recent replacements made in the classic fangshi profile that the originals undoubtedly had.

Edge contours are still intact, no signs of excessive grinding that are so common on Chinese swords of this age. No remains of pitting, some small contact related edge damage. Scabbard is somewhat fragile but in decent condition for age. Hilt wrap was lost, and is renewed in high-grade green natural silk by myself.

A very nice example of a rare and early type of Chinese officer's saber with a blade of very high quality, in near-excellent condition. It retains most of its original fittings with silver sheet plating. 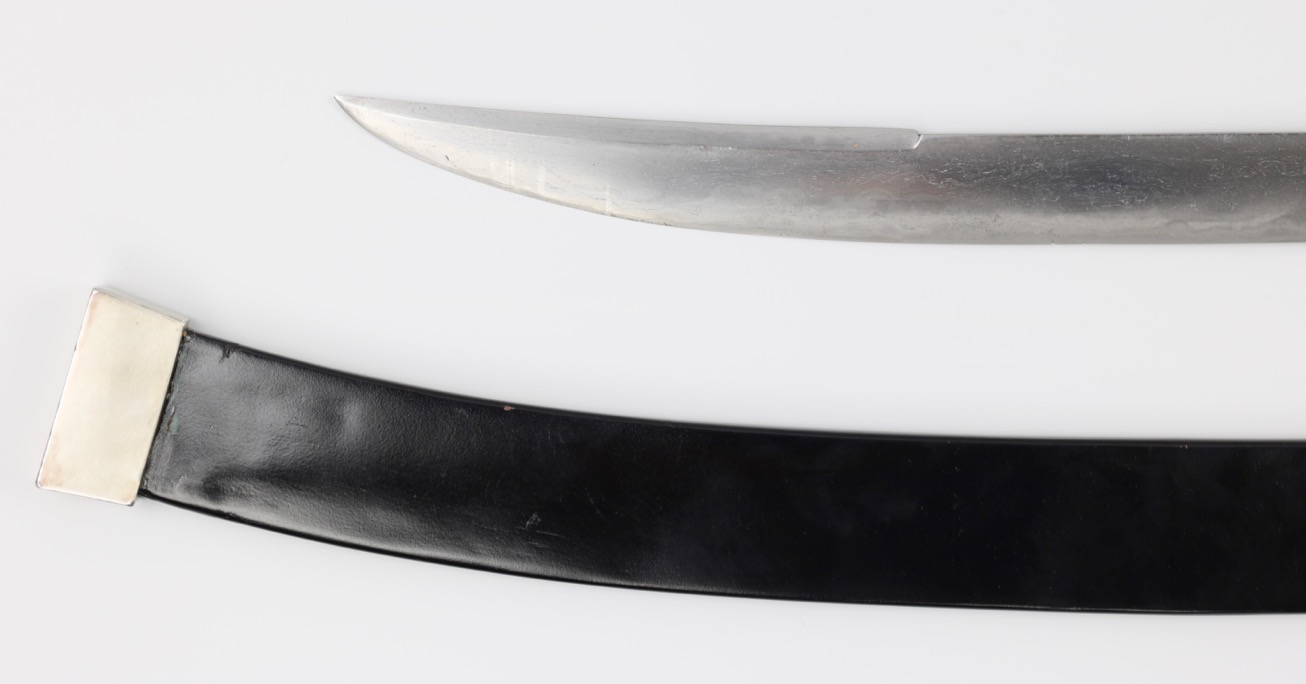 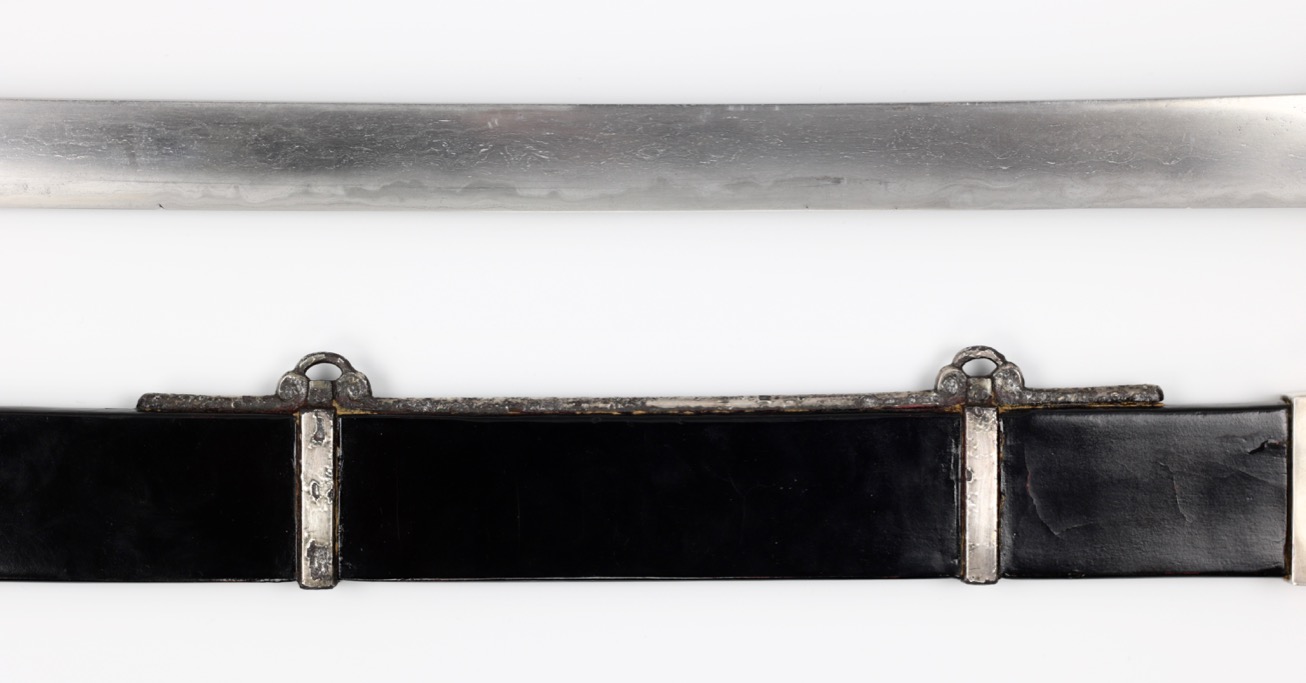 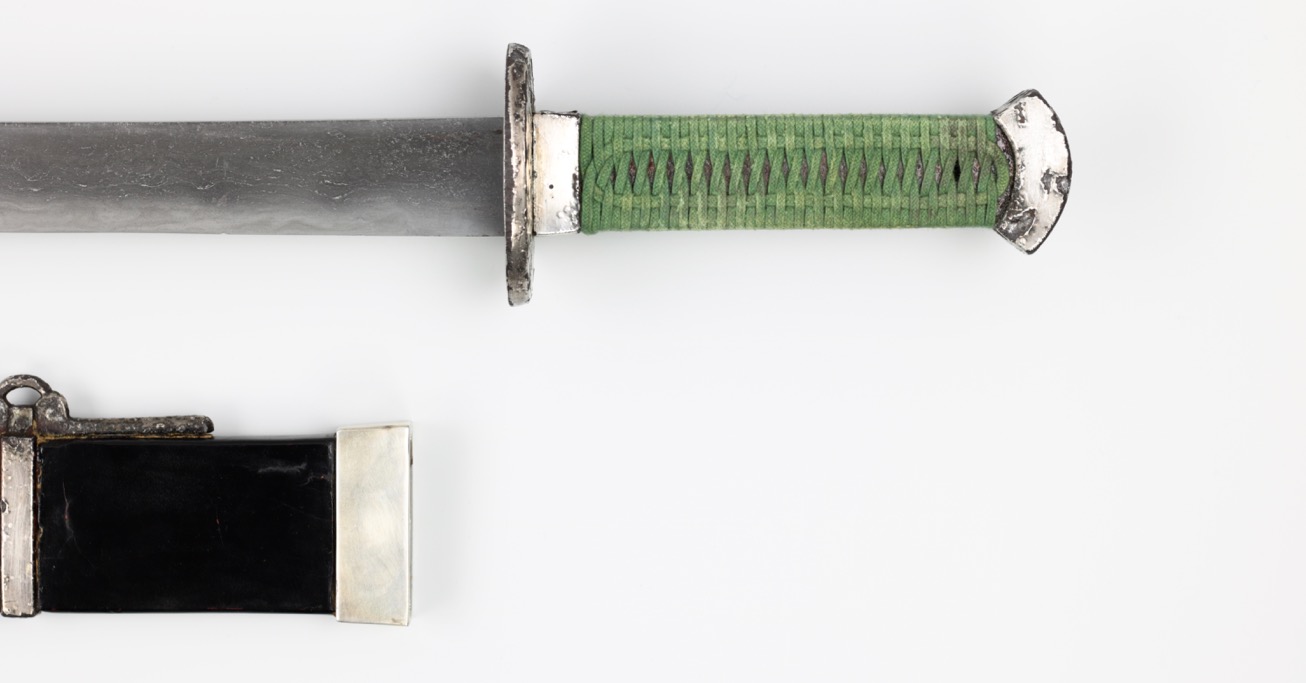 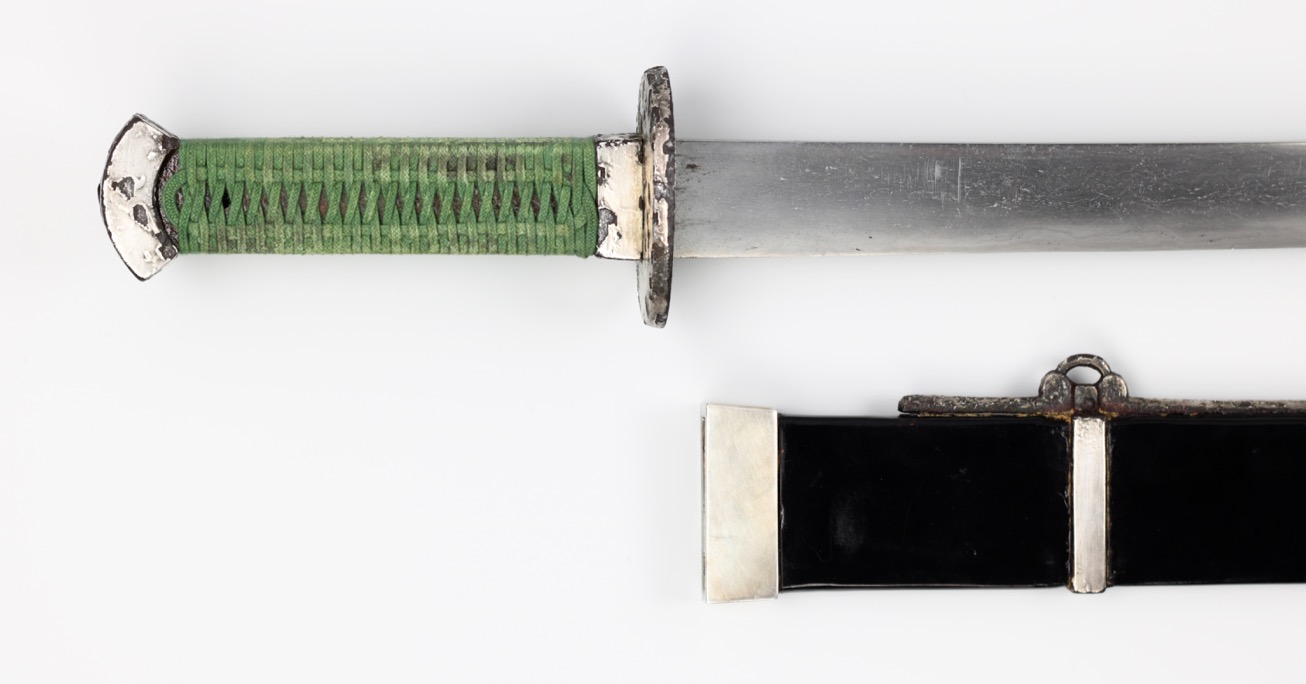 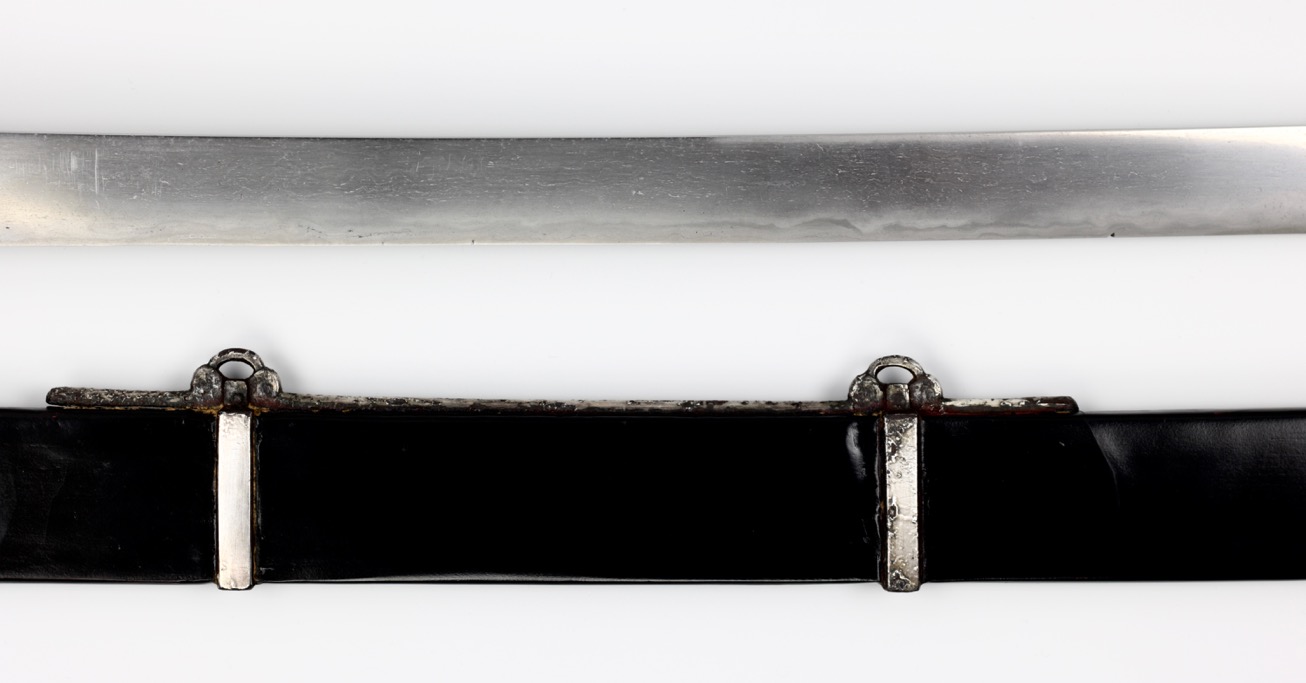 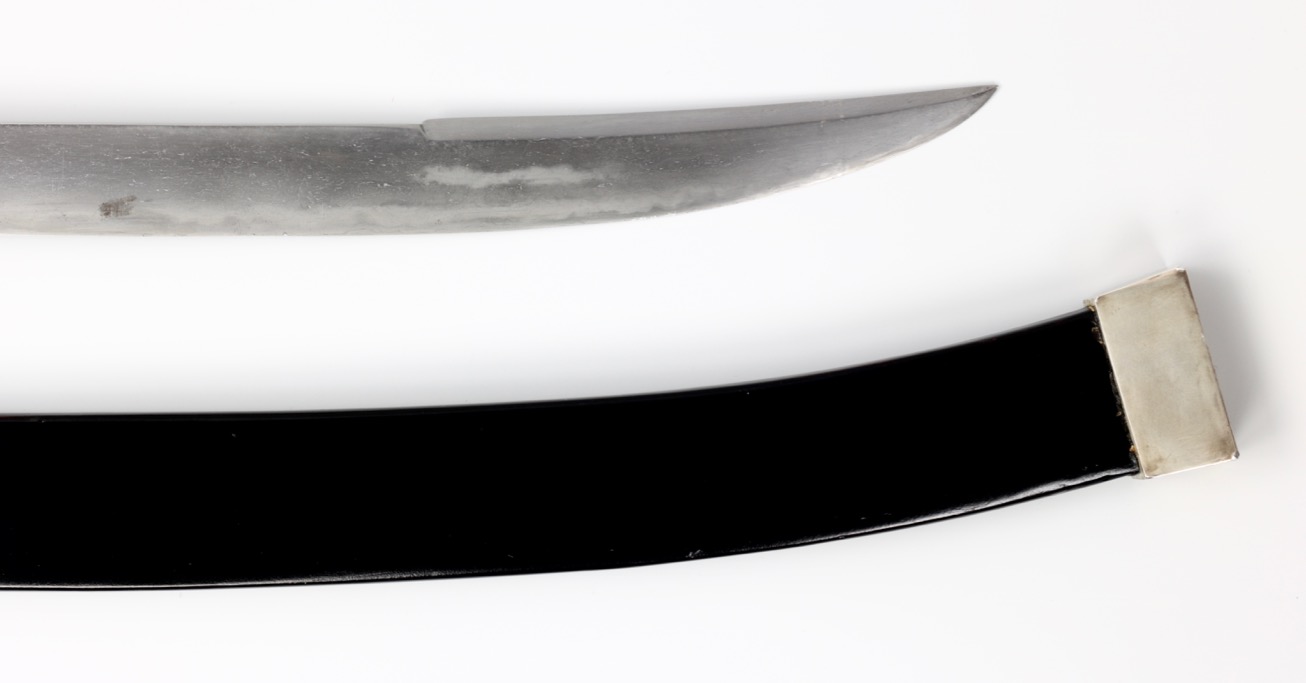 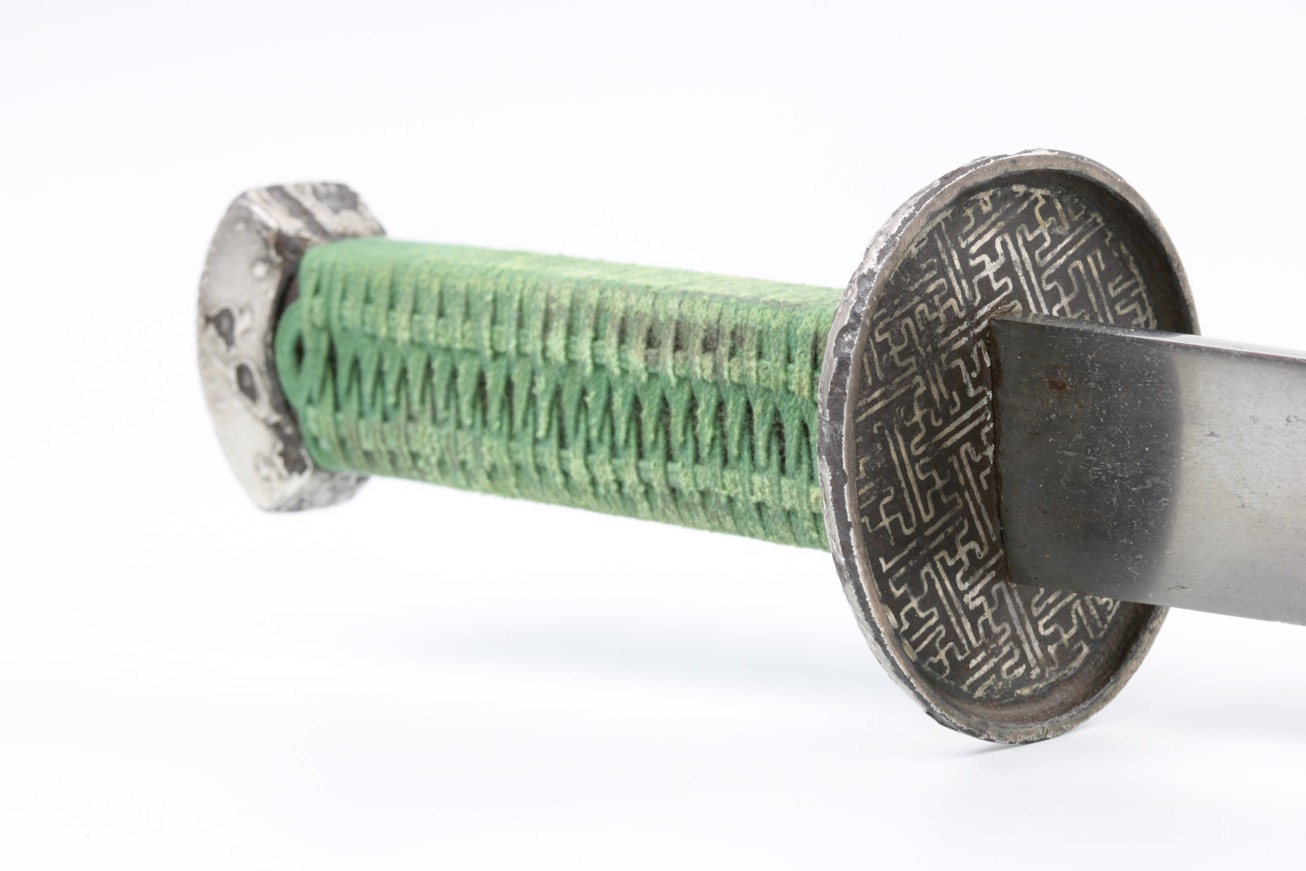 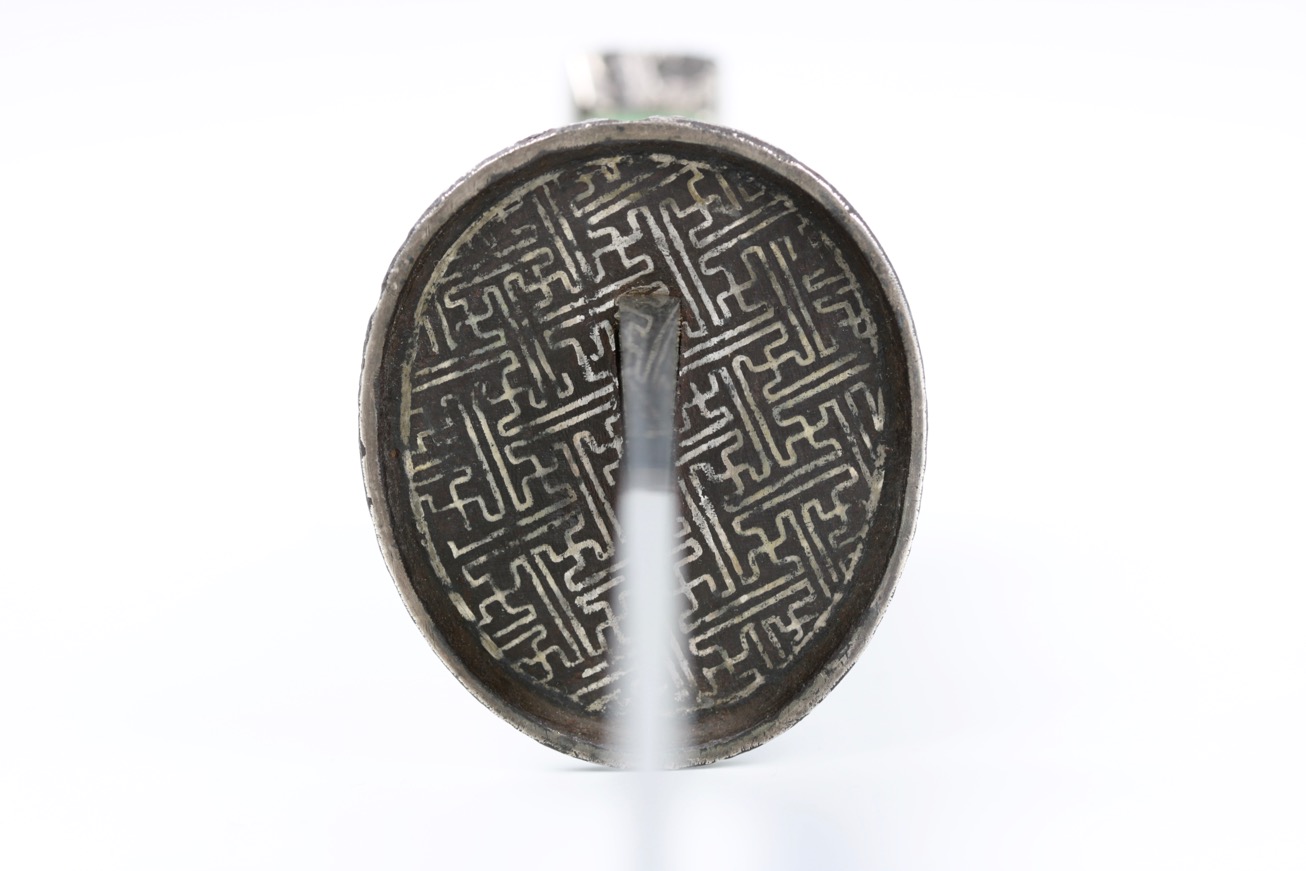 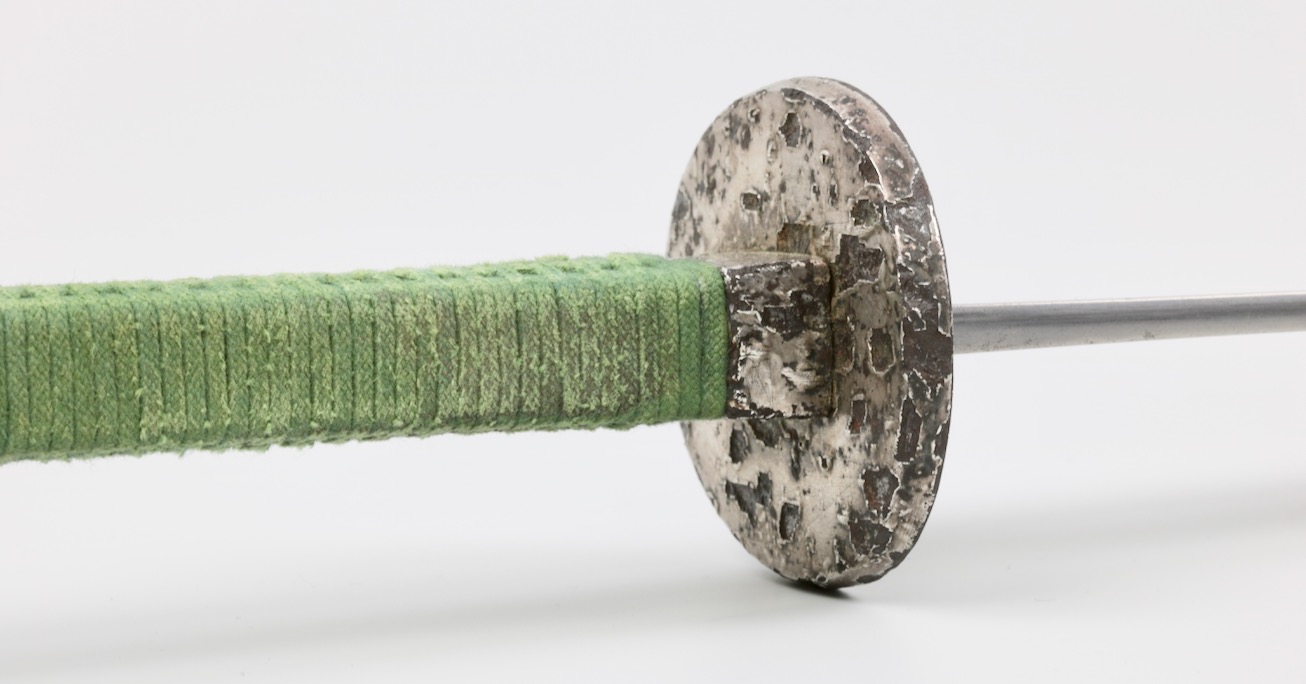 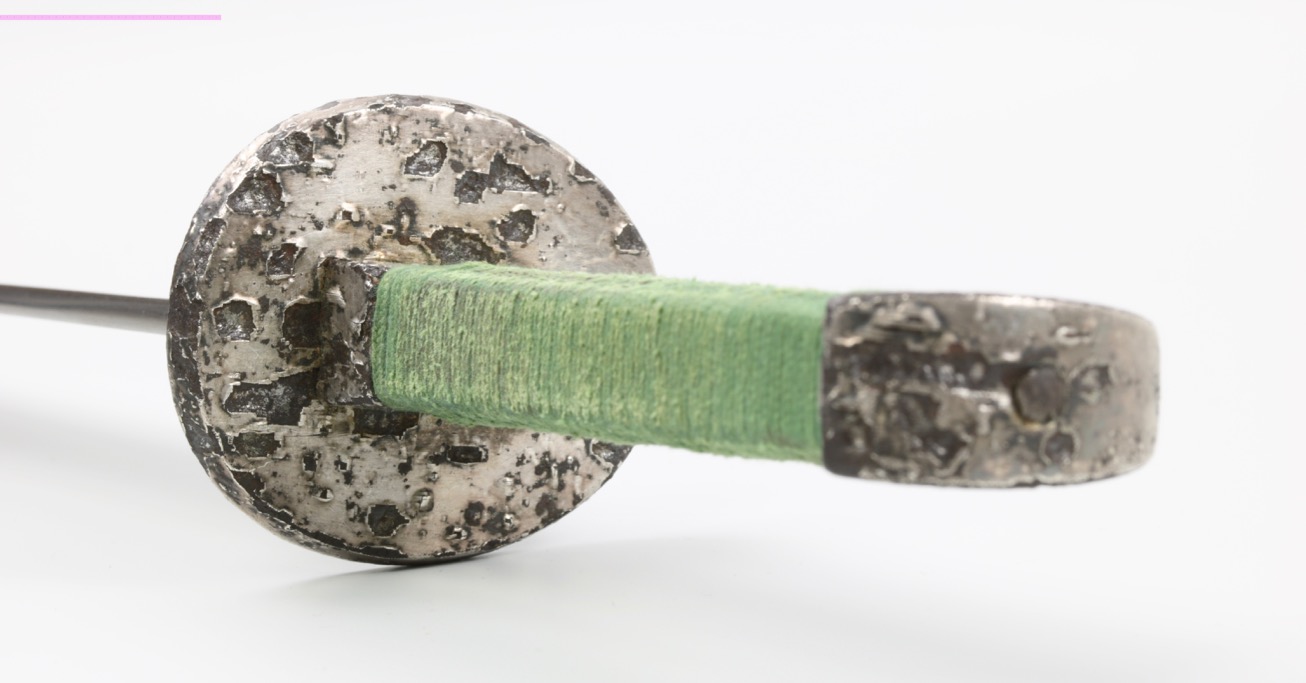 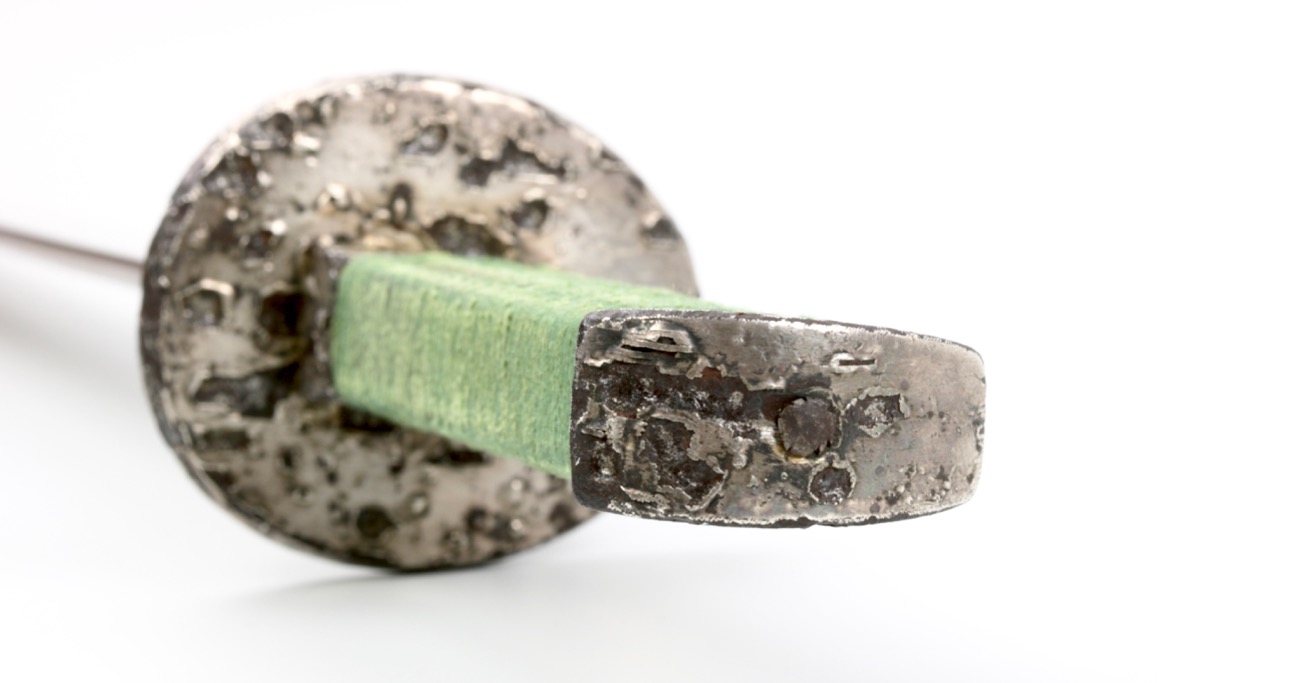 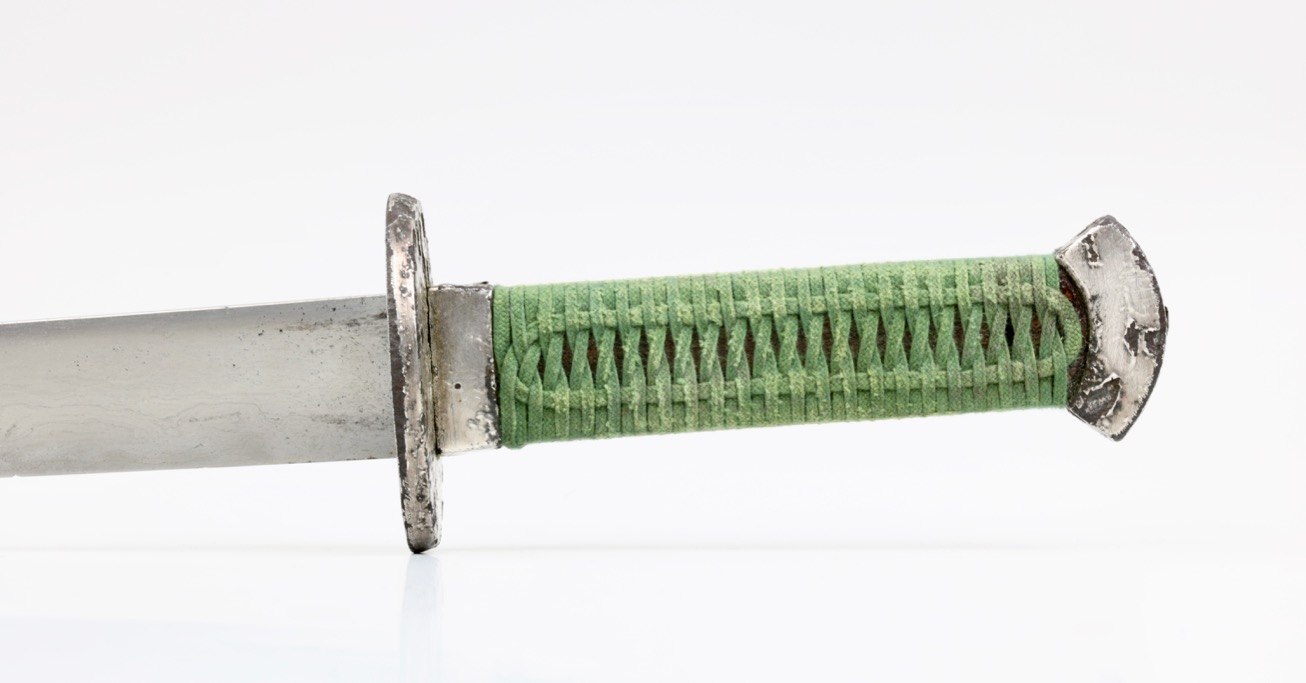 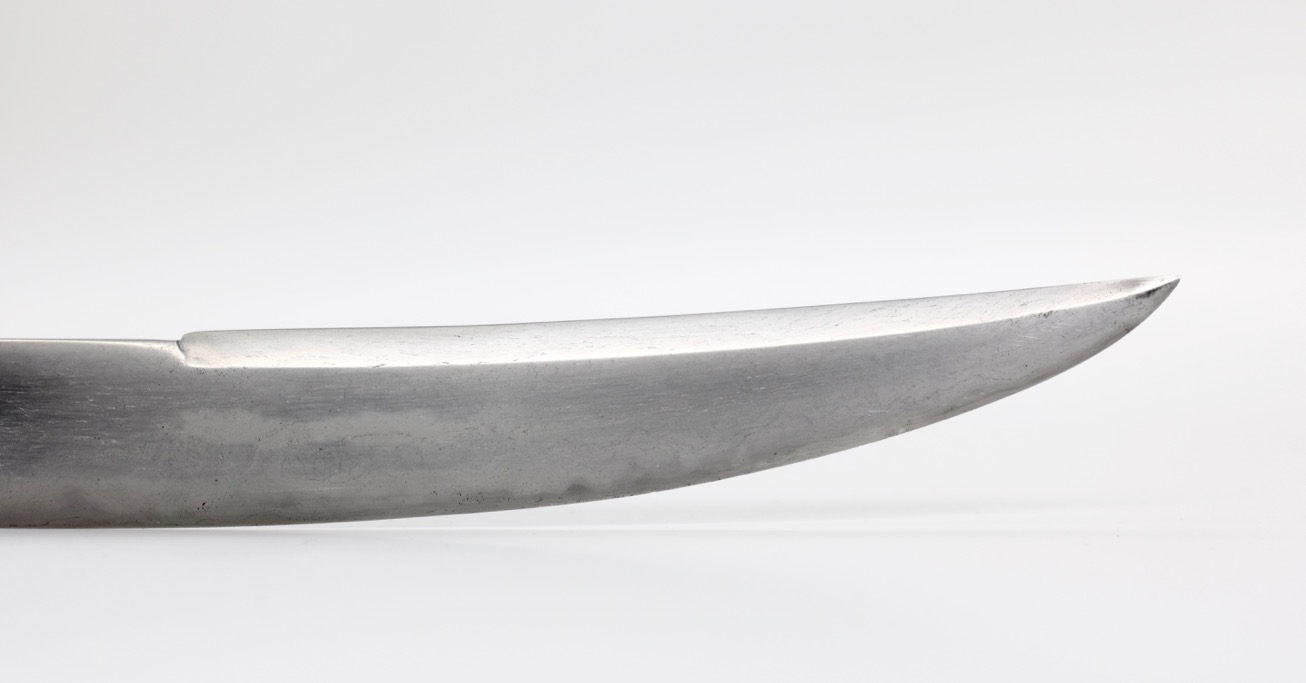 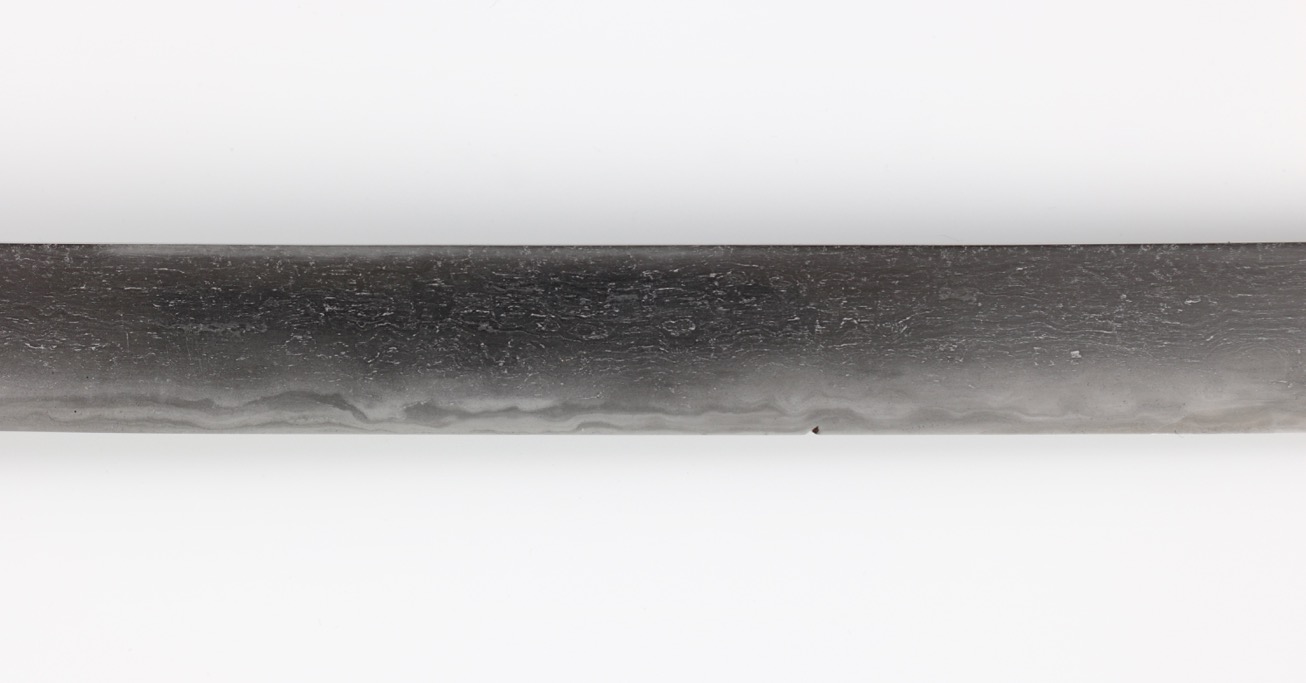 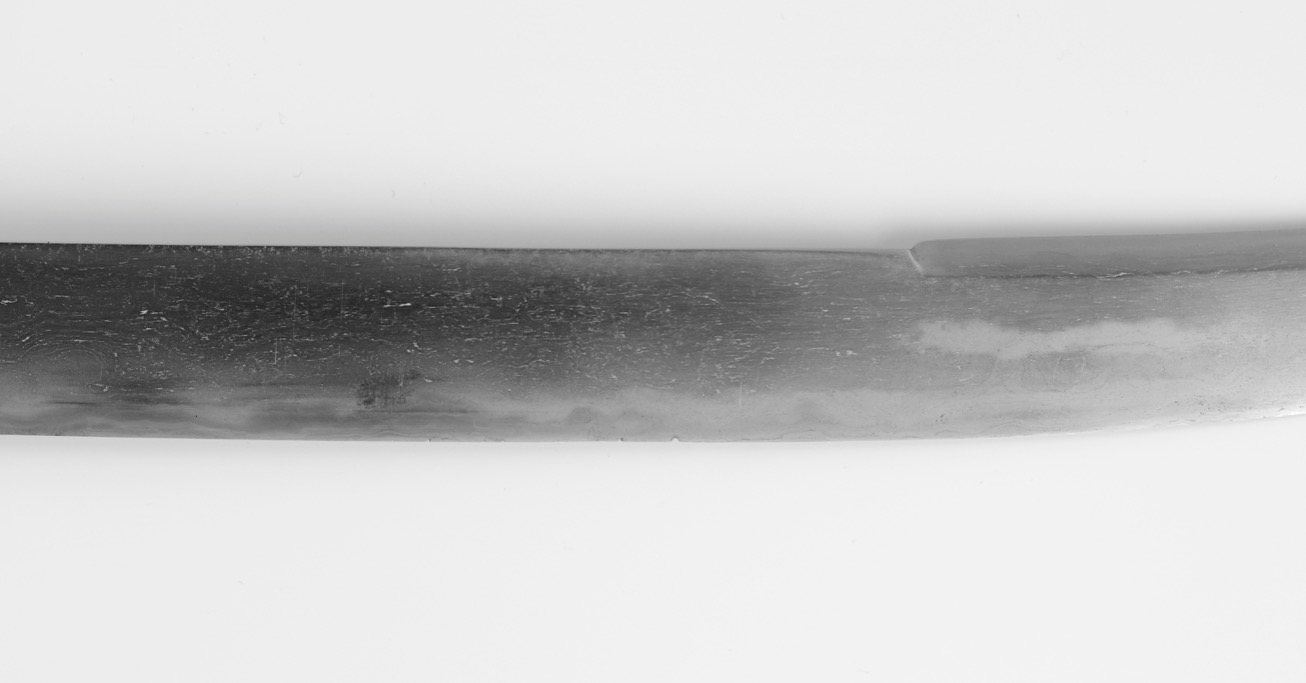 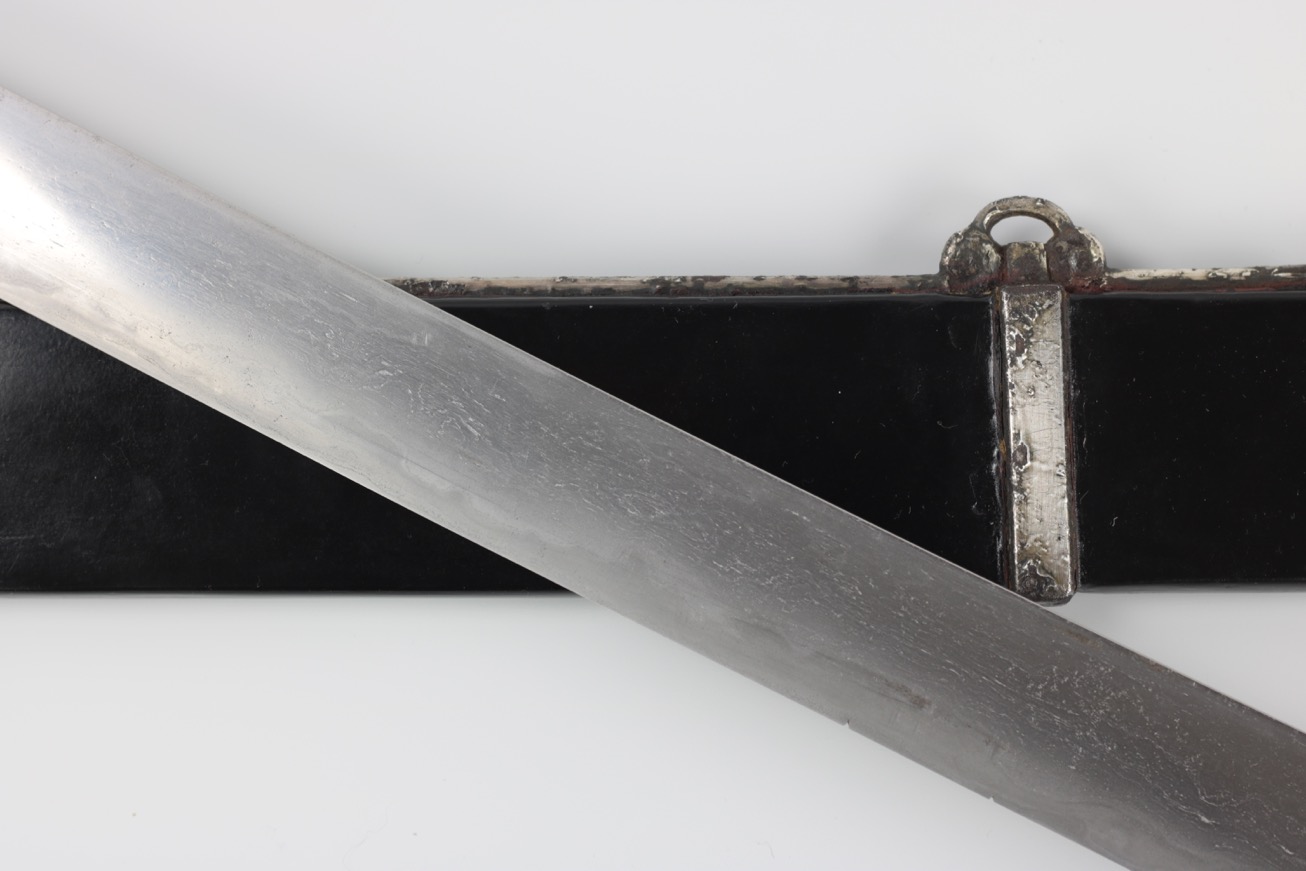 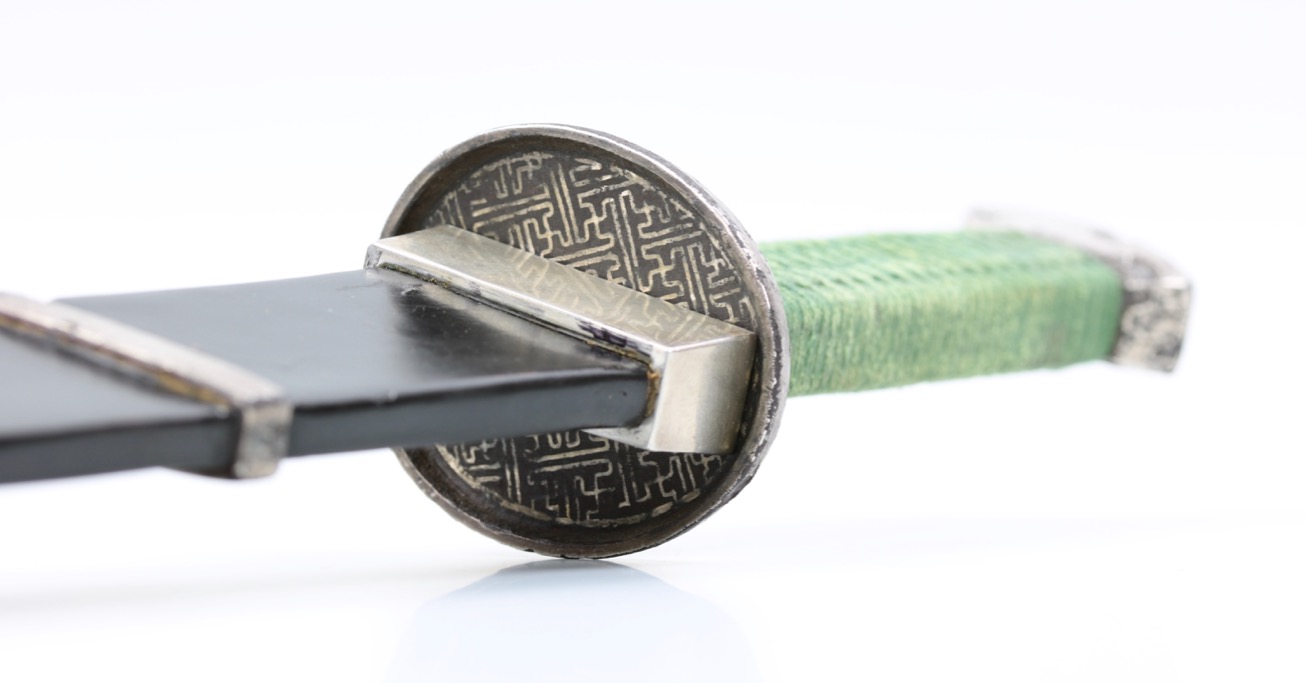 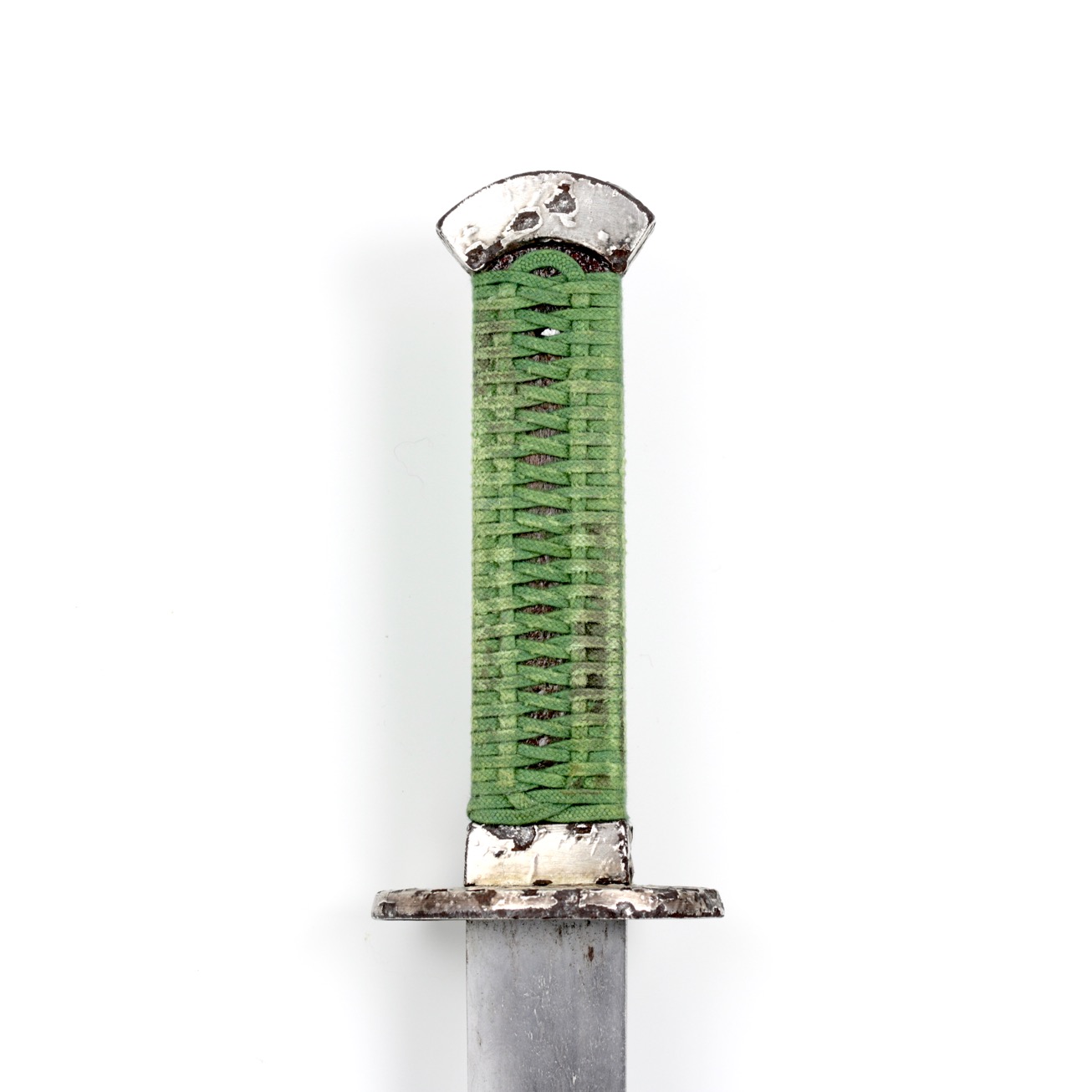